Colorado railroads are known mostly for three things; flat plains, the Rocky Mountains, and narrow-gauge railroading (even today!). It shouldn't be surprising then that mountainous operations also define the state's railroads.

While the first line would not appear in Colorado until over 40 years after the Baltimore & Ohio was incorporated the state's rail network rapidly expanded after this time.

During the state's heyday with trains it featured a rail network consisting of over 5,000 miles and a half-dozen classic "fallen flags".

Today, Colorado is dominated by Class I systems Union Pacific and BNSF Railway. Along with the Class I railroads the state is also renowned for its bucolic and breathtaking narrow-gauge railways.

Most were operated by the fabled Denver & Rio Grande Western while other famous names included the Rio Grande Southern; Denver, South Park & Pacific; and Colorado & Southern.

The information included on this page gives a brief background and overview of Colorado from its earliest history with trains to present-day operations. 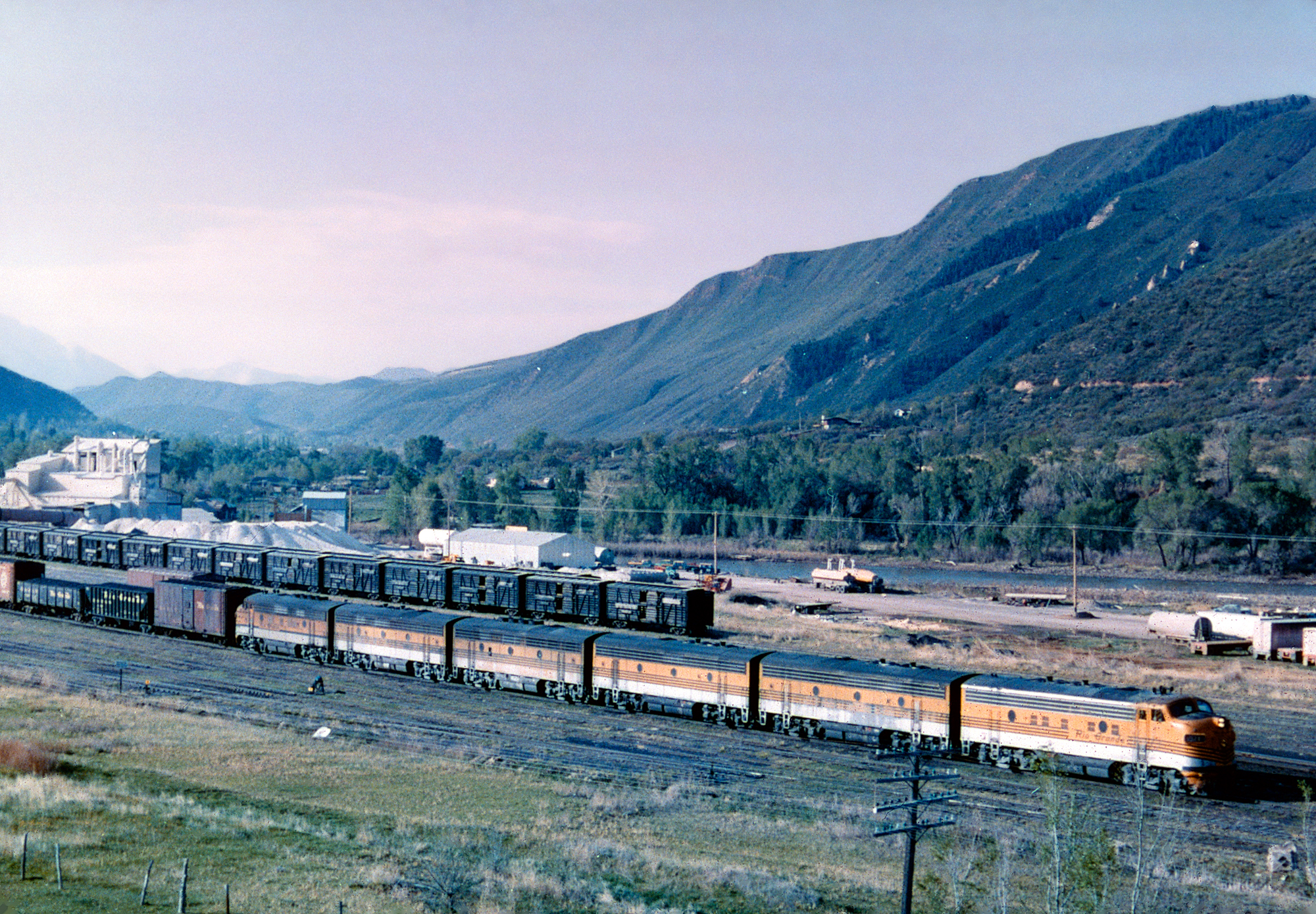 Colorado railroads arrive rather late to the game in comparison to other states, as the state's first railroad did not appear until 1867.

That year the Denver Pacific Railway & Telegraph Company was chartered to complete a main line between Denver and Cheyenne, Wyoming where it would establish a connection with the growing Union Pacific system.

After three years of construction the new 100-mile route was opened in 1870. Just ten years later the DPR&TC became another division of the UP system.

After this line was opened the state's rail network quickly exploded to over 1,500 miles by 1880.

Of the classic fallen flag systems that made up most of Colorado's railroads, the Rio Grande is by far the state's most celebrated and recognized, mostly due to its fabled and sprawling narrow-gauge system, which lasted until the late 1960s.

It's narrow-gauge operations, or what remained of them anyway (over the years the once almost exclusive narrow-gauge system had been converted to standard gauge), was centered primarily in the southern part of Colorado and northern New Mexico.

It was originally built to serve coal, timber, silver, and gold although most of this (particularly the latter) had dried up by the 20th century and in its final days the narrow-gauge operations were mostly a tri-weekly service carrying mixed trains of people and freight. 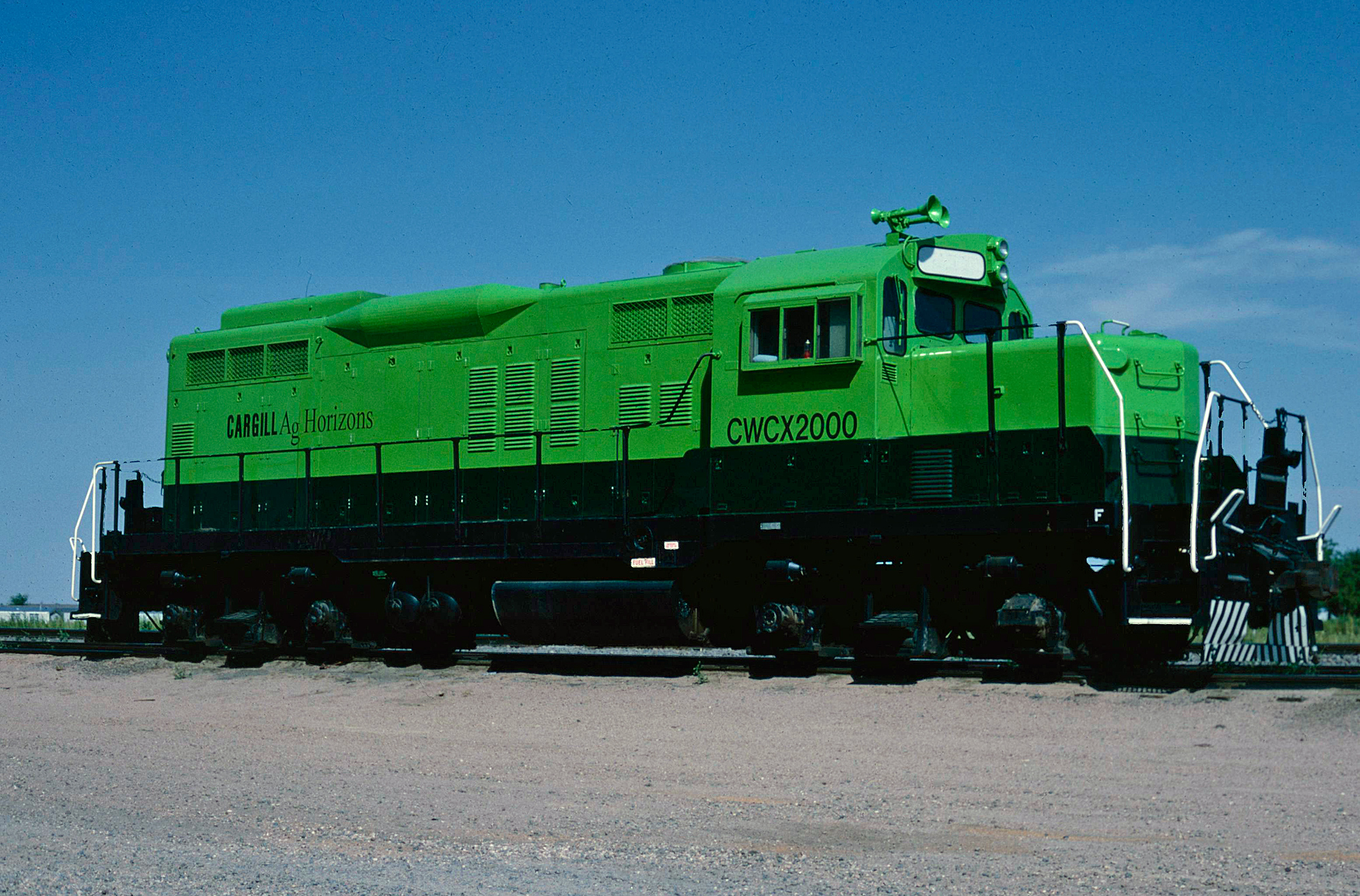 One of the Rio Grande's narrow-gauge operations did survive, however. The Silverton Route survived abandonment and today continues on as the very popular Durango & Silverton Railroad. A 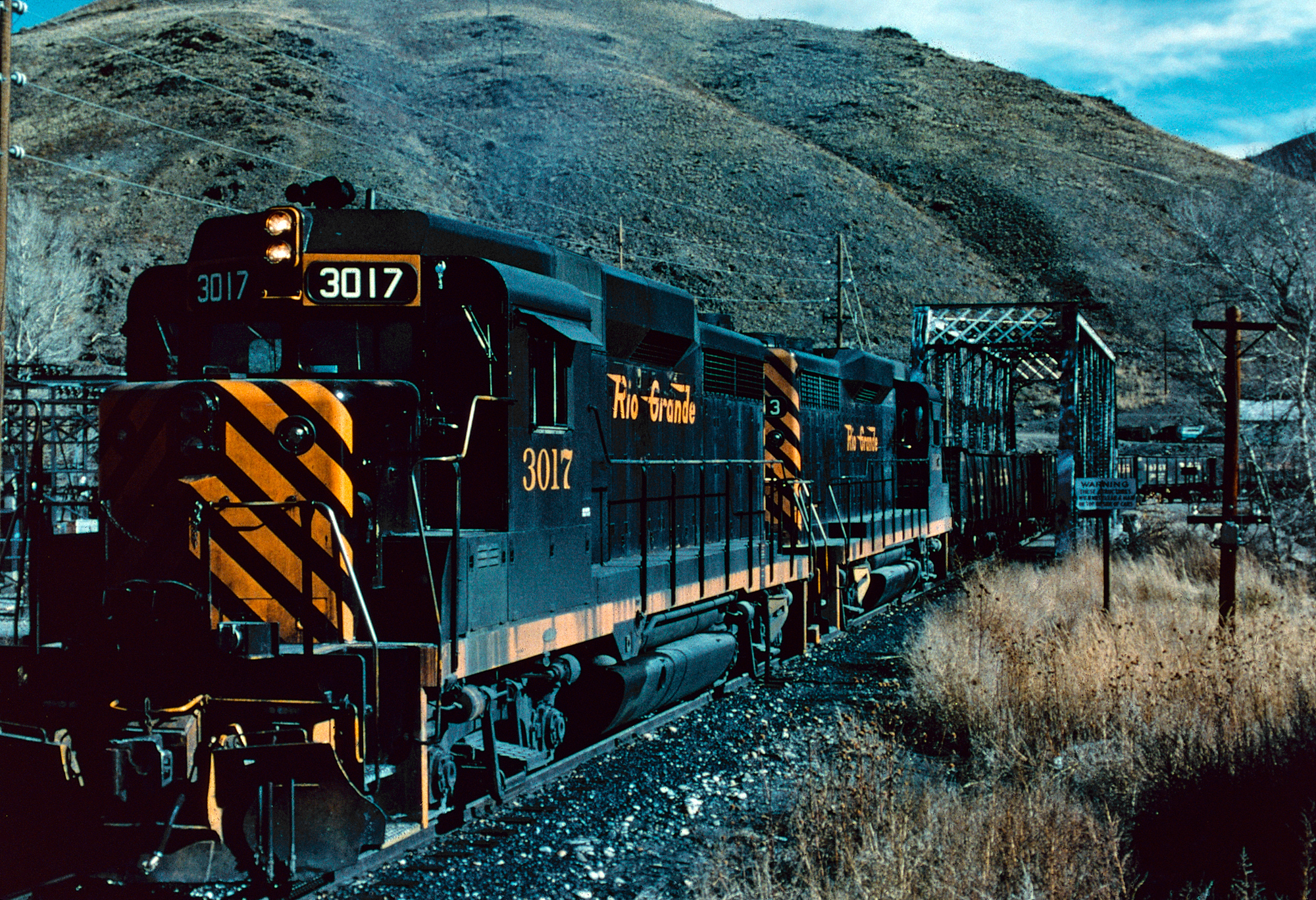 Rio Grande GP30's #3017 and #3013 enter the Monarch Branch (which served the Colorado Fuel & Iron coal mine at Monarch) in downtown Salida, Colorado heading west with empties bound for the mine on November 6, 1975. This segment was originally narrow-gauged and served as the main line from Salida to Montrose via Gunnison and Marshall Pass. It was later removed west of Poncha Junction and standard-gauged as a short stub serving the mine. This segment was eventually abandoned by the 1980s. Ed Fulcomer photo. American-Rails.com collection.

At the Continental Divide northwest of Denver, the Denver and Rio Grande Western completed the famous Moffat Tunnel in 1928, some 6.1-miles in length and bypassing the torturous Rollins Pass, over 11,000 feet in height!

The new tunnel cut down transit times over that section of main line from several hours to mere minutes and further strengthened the line's demand as a high-speed connection over the Rockies.

Even more famous than the tunnel was the introduction of a joint passenger train by the Burlington, Rio Grande, and Western Pacific in 1949 known as the California Zephyr deliberately routed through the mountains so that passengers could witness the stunning beauty offered over the Rio Grande's main line through the Rockies.

Not surprisingly the train was an instant hit with the public and did so well that the Rio Grande elected not to include it in Amtrak in 1971 and would rename the train the Rio Grande Zephyr. 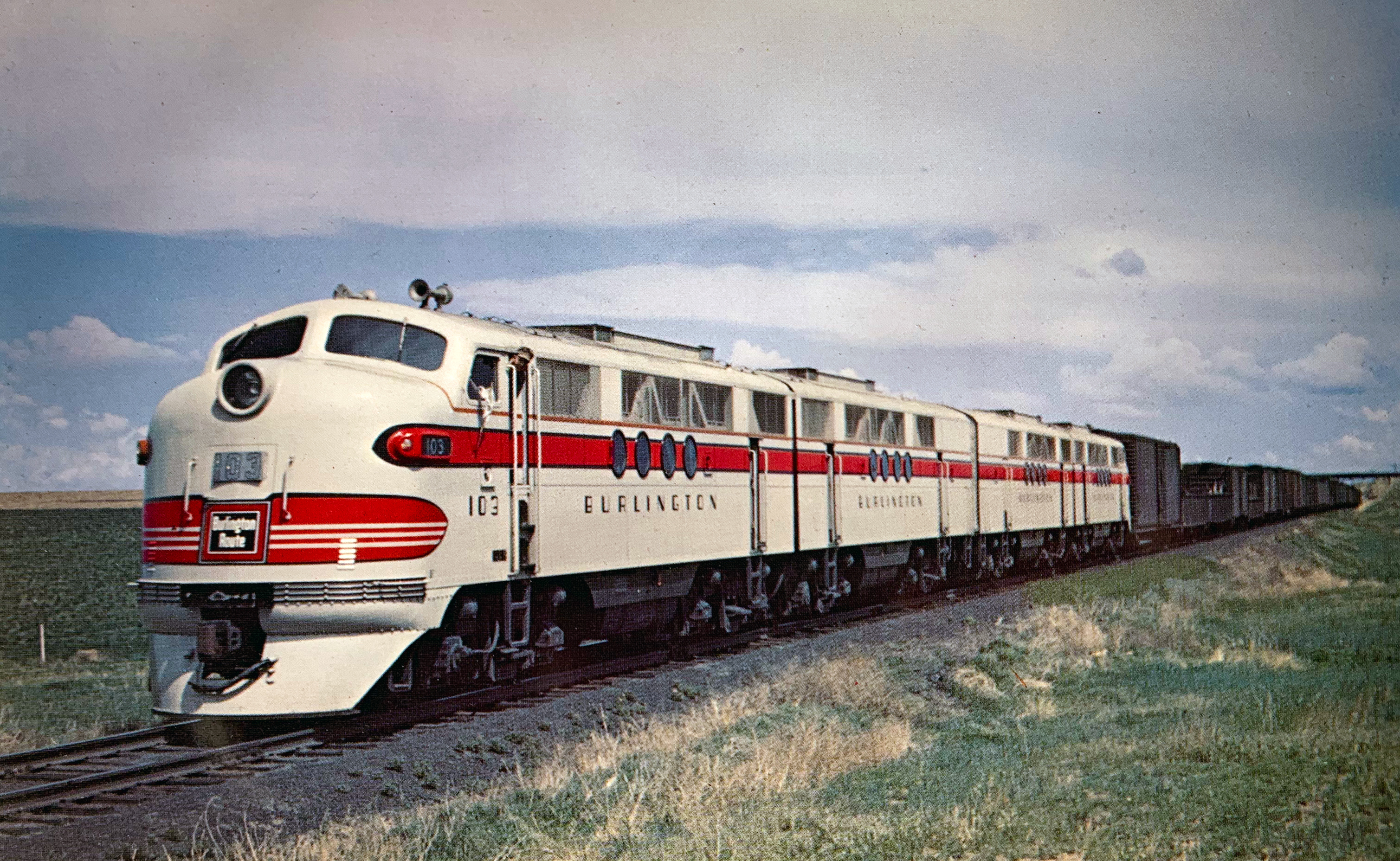 This recently-delivered set of Chicago, Burlington & Quincy FT's (#103-A through #103-D) lead a 126-car freight westward near Keenesburg, Colorado on May 31, 1944. Richard Kindig photo. Author's collection.

The train by then was so well known that Amtrak did not hesitate to keep it in service when the Rio Grande finally did elect to relinquish the train in the early 1980s and even honored it by renaming it back to the California Zephyr in 1983.

Colorado has lost a significant amount of its rail infrastructure with 3,100 miles abandoned since the 1920's.

While there have been segments of standard gauge lines removed, mostly by way of branches and secondary trackage (operated by the Rio Grande, Santa Fe, Burlington, Missouri Pacific, and even the Rock Island), most of the abandonments were former narrow-gauge routes. 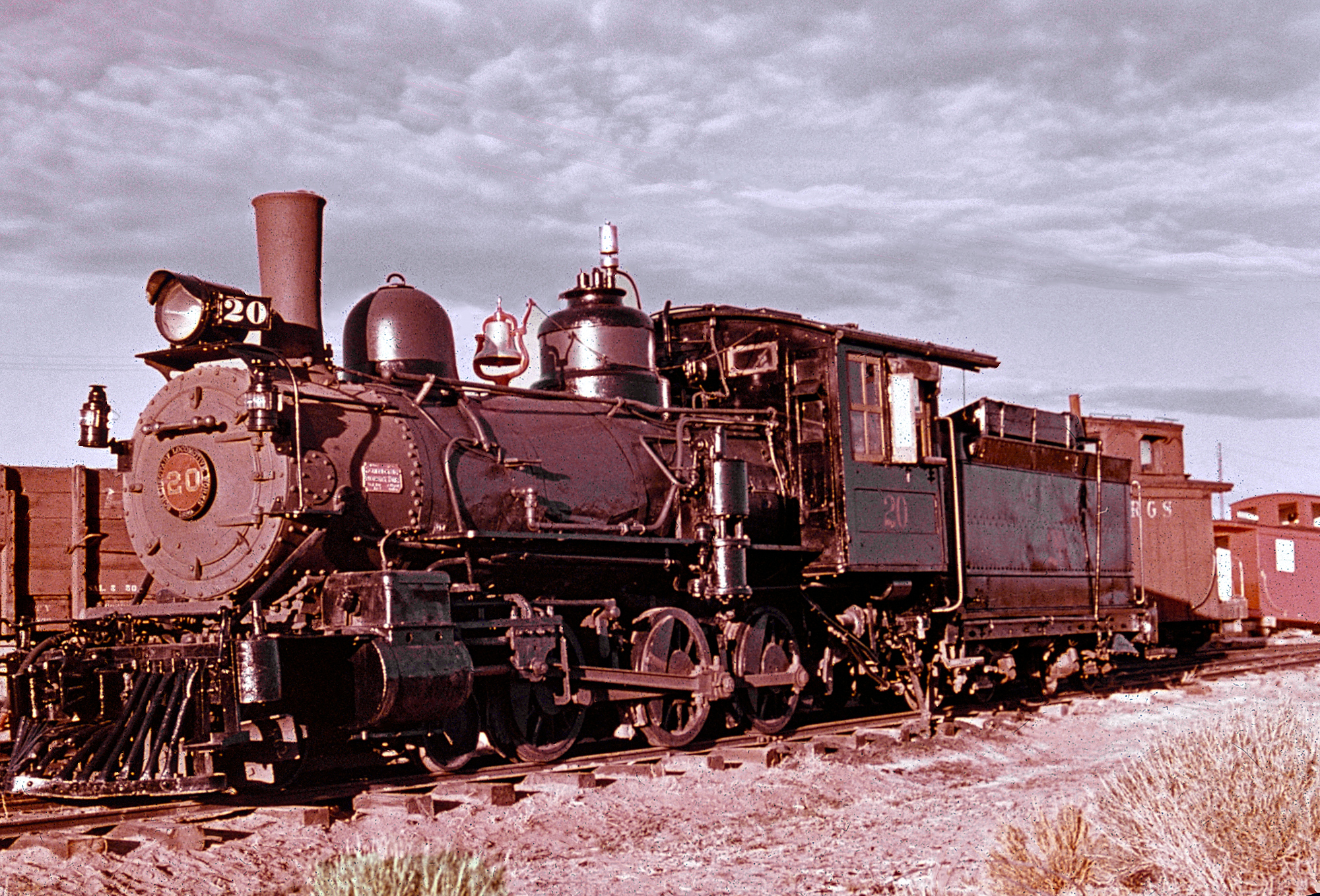 Rio Grande Southern 4-6-0 #20 lays over along the D&RGW at Alamosa, Colorado in 1952. This unit was built as Florence & Cripple Creek #20 in 1899 by the Schenectady Locomotive Works. American-Rails.com collection.

According to George Hilton's book, "American Narrow Gauge Railroads," its narrow-gauge railroads peaked in the 1880's at 2,199 miles; 1,673 miles was comprised of the Denver & Rio Grande alone.

In addition, the Colorado Central operated roughly 145 miles and the Denver, South Park & Pacific another 335 miles.  The rest was comprised of small operations that did not exceed 40 miles.

The D&RG began reducing its narrow-gauge network by the late 1880's but interestingly continued to operate as many as 46 miles until 1980.

Notable narrow-gauge operations of Colorado include:

There were efforts recently to revive the line but those appear to have fallen through.

Today, the Rio Grande and other classic fallen flag systems have been merged away into the Union Pacific and BNSF Railway which carry on much of what their predecessors left behind as many lines remain important routes.

For a more in-depth look at Colorado's rail mileage over the years please refer to the table below. As you can see, during the height of rail travel Colorado was home to just over 5,500 miles of trackage. 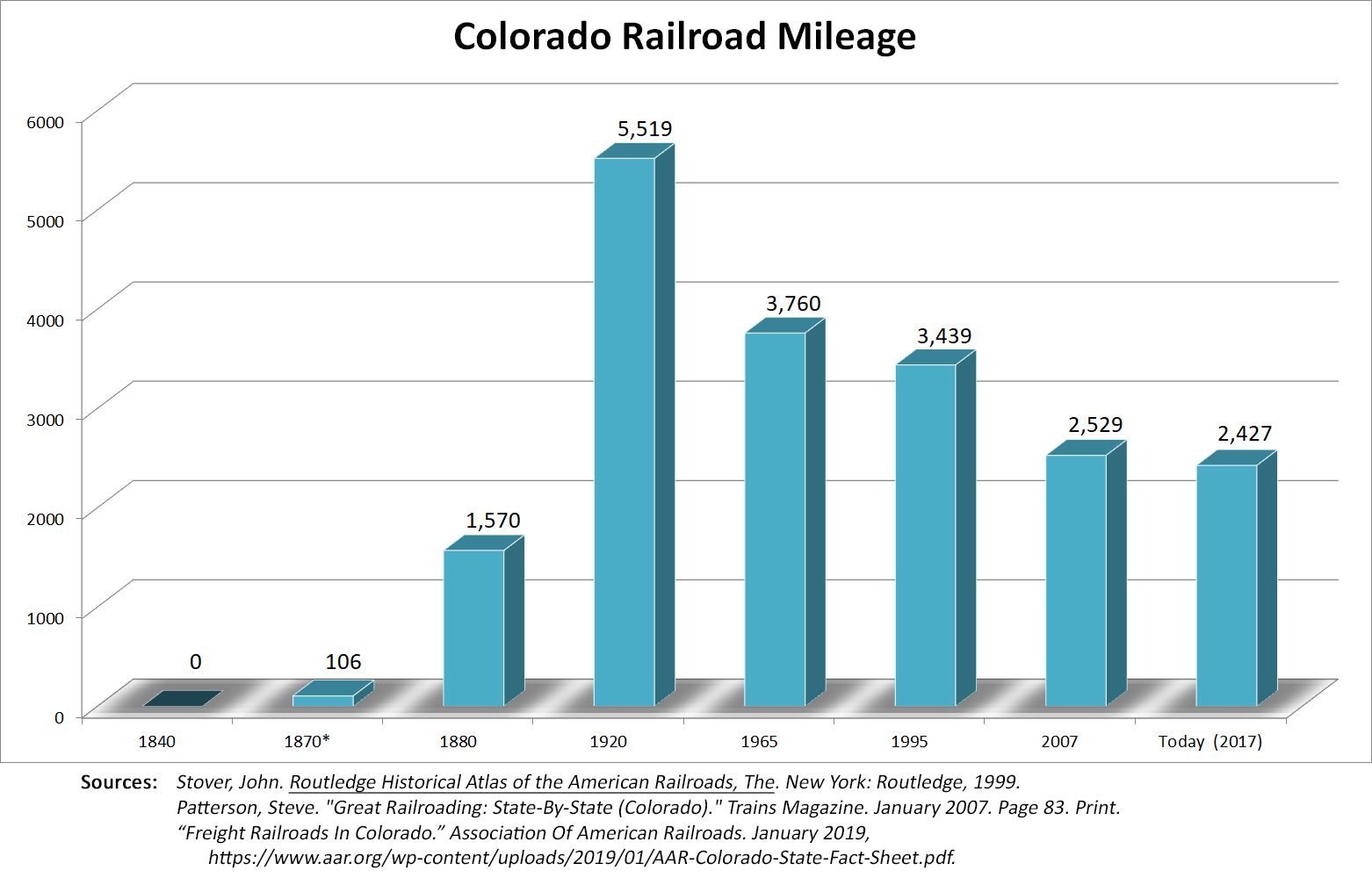 * Colorado's first operational railroad was the Denver Pacific Railway & Telegraph Company.  Incorporated in 1867 it was designed to link Denver by rail after the Union Pacific elected to bypass the Frontier town on its way to meet the Central Pacific.  With a great deal of financial backing it was completed to Cheyenne in 1870.  In 1880 it merged with Union Pacific and Kansas Pacific forming a new Union Pacific Railway.

Today, that number has fallen to around 2,500 or a loss of 54%. Considering that many states have lost about half of their rail infrastructure since the 1920s Colorado's decline is fairly typical. 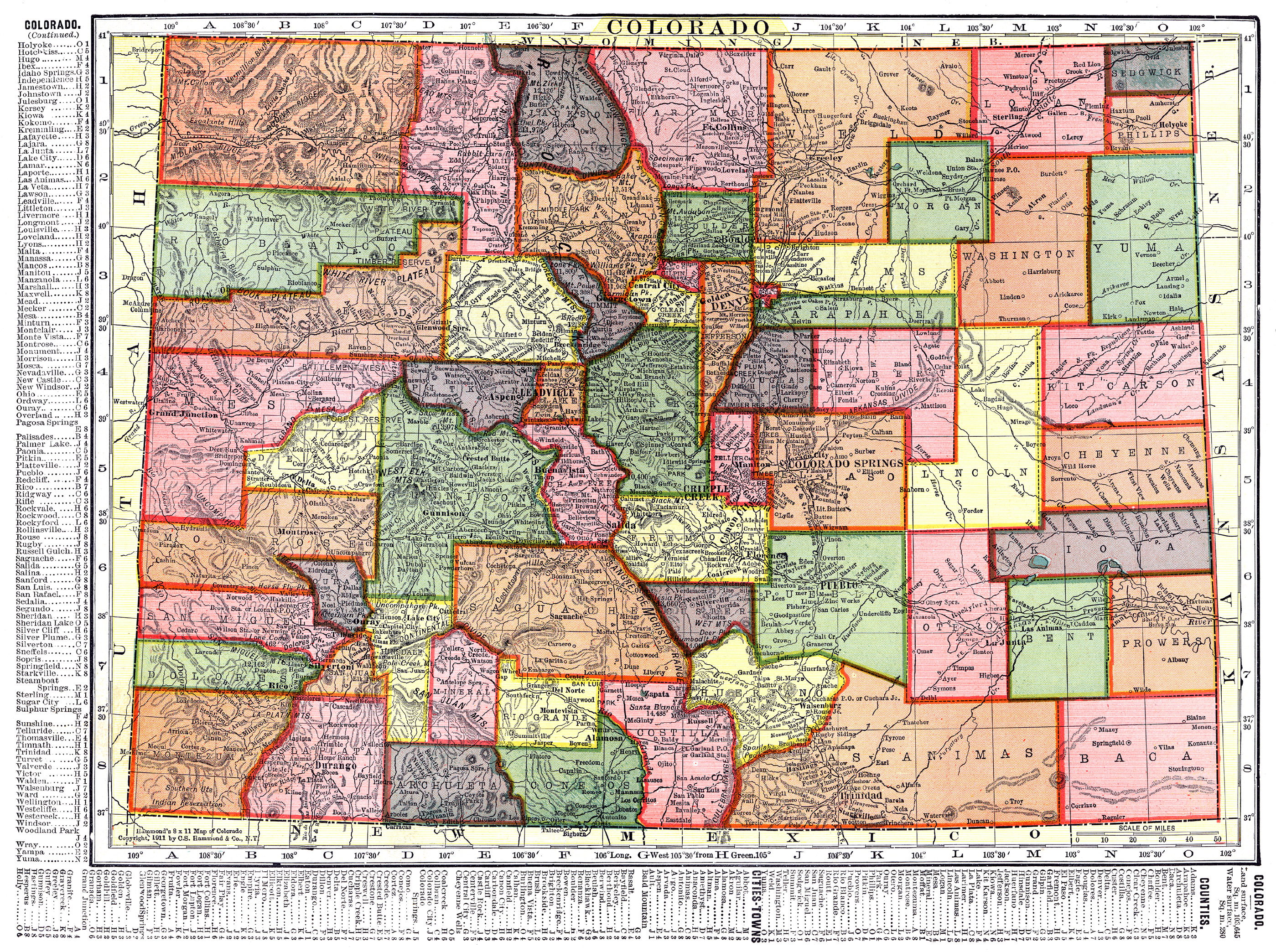 A Colorado railroad map from 1911 showing most of the state's line in service. The one notable exception here is Moffat Tunnel and Denver & Salt Lake Railway, not completed until 1923. Author's collection.

Along with the Durango & Silverton and C&T narrow-gauge operations the state boosts several other museums and tourist railroads.  These include the: 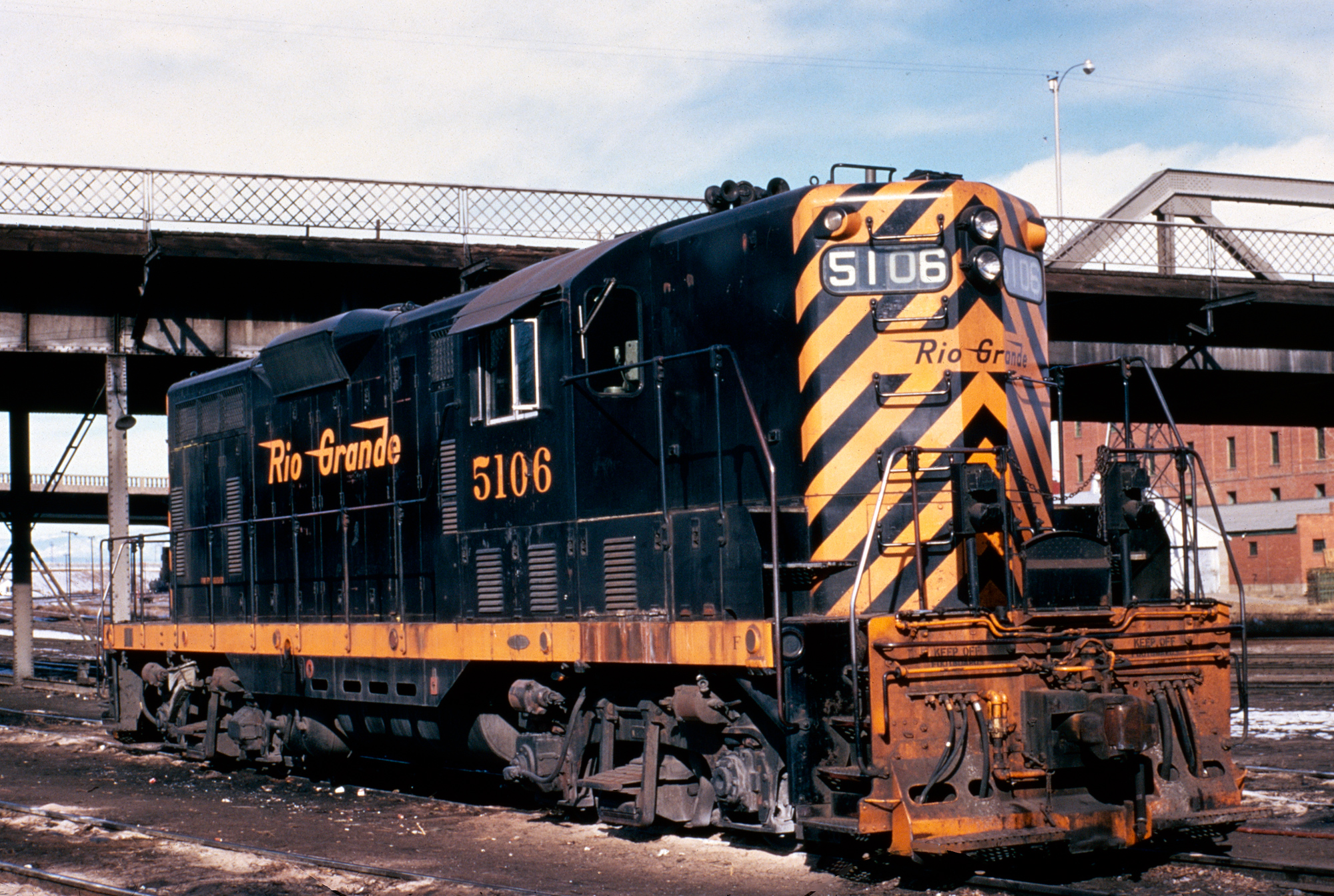 Lastly, if you are planning a trip to Colorado to either railfan or enjoy the sites and sounds of the state's many museums and tourist railroads don't forget to stop by beautiful Denver Union Station in downtown Denver. It is well worth the drive to see!

While it still serves Amtrak's California Zephyr and Southwest Chief,  the station's future include it becoming the city's hub of its ever-growing commuter rail system.

In any event, the state's beauty alone is well worth a visit to the Centennial State, whether your interested in Colorado railroads or not! All in all there is plenty to do and see all across the state so you are bound to have a wonderful visit whatever you decide to do.