Standard coach cars offered the most basic of amenities on board passenger trains, even during the streamliner era.

Their purpose was quite straightforward, to provide basic [and in later years] and comfortable seating for passengers. Coach cars were the earliest passenger train cars, dating back to the late 1820s and 1830s.

The original designs were simply based from the era's stagecoaches.

As John White Jr. notes in his authoritative title, "The American Railroad Passenger Car (Part I)," there were three basic types at this time (which rode on two simple axles): 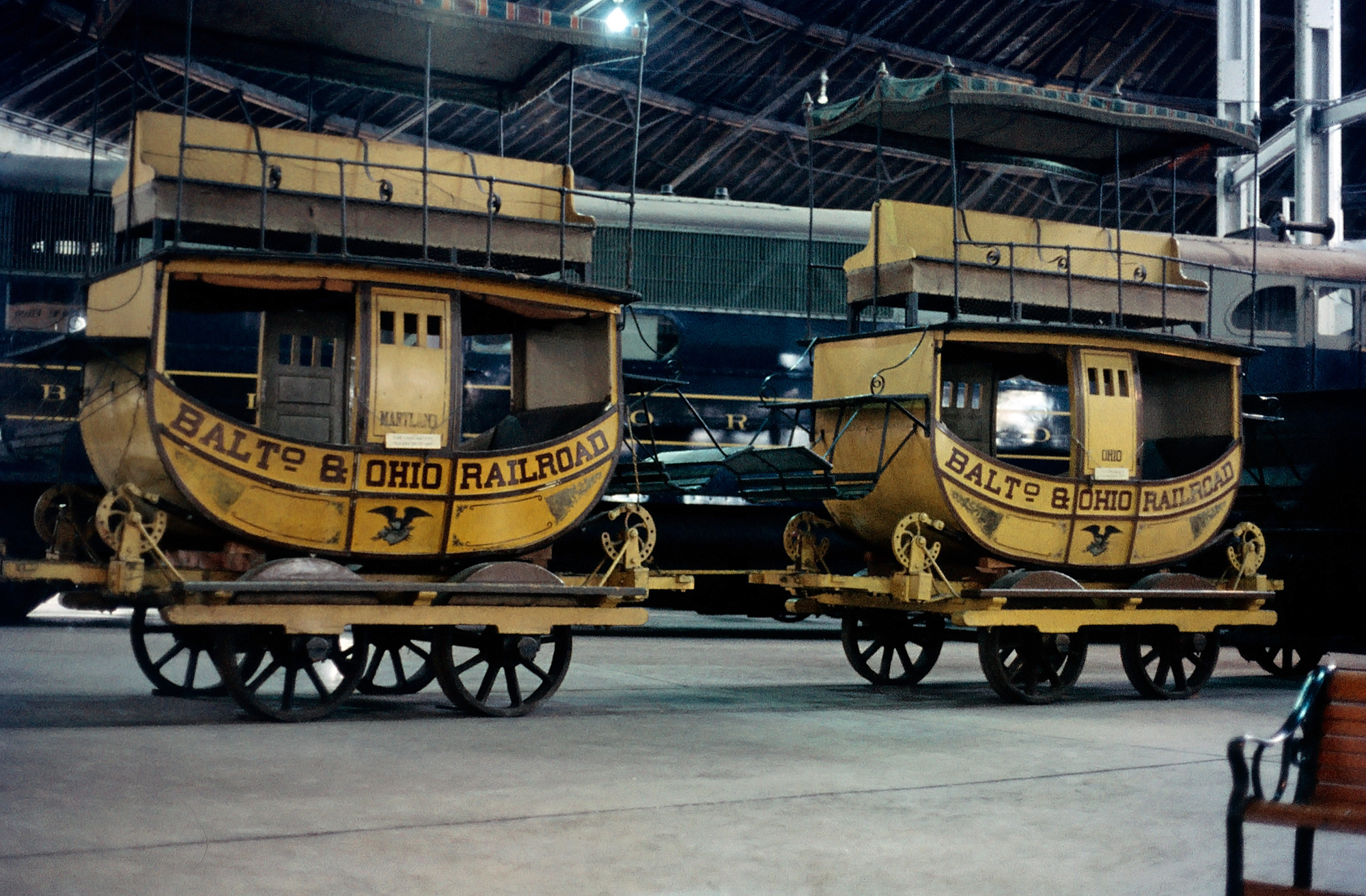 Replicas of Baltimore & Ohio's original passenger carriage coaches, "Ohio" and "Maryland," built for the 'Fair Of The Iron Horse' (1927) are seen here on display at the B&O Railroad Museum during the spring of 1973. The cars remain here today. The original six were built by Richard Imlay in 1830 for the B&O's inaugural passenger service from Baltimore to Ellicott Mills. Imlay based his design from turnpike stagecoaches of that era. American-Rails.com collection.

As car design and construction improved so, too, did the ride quality and seating coaches provided.

Still, even during the final years of privatized passenger rail travel many railroads continued to rely on standard, early 20th-century coaches that were not particularly comfortable.

Today, coach services on Amtrak and commuter lines is generally quite good.

By the mid-19th century the standard coach, as we know it today with a center isle and seating to either side, came into being.

Standard forward bench seating in coach cars with a central aisle was the primary design feature for nearly a century. The layout of this coach type, known as an "Open" design, was designated by the number of seats and aisles it contained.

For instance, if the car held two seats along a central aisle it was known as a "2+2" while three seats is known as a "3+3".   It was not until the streamliner era of the mid-1930s did the coach evolve.

Around this time coach cars became more diversified featuring individual, more comfortable seats (which sometimes swiveled, such as in the case of the Southern Railway). 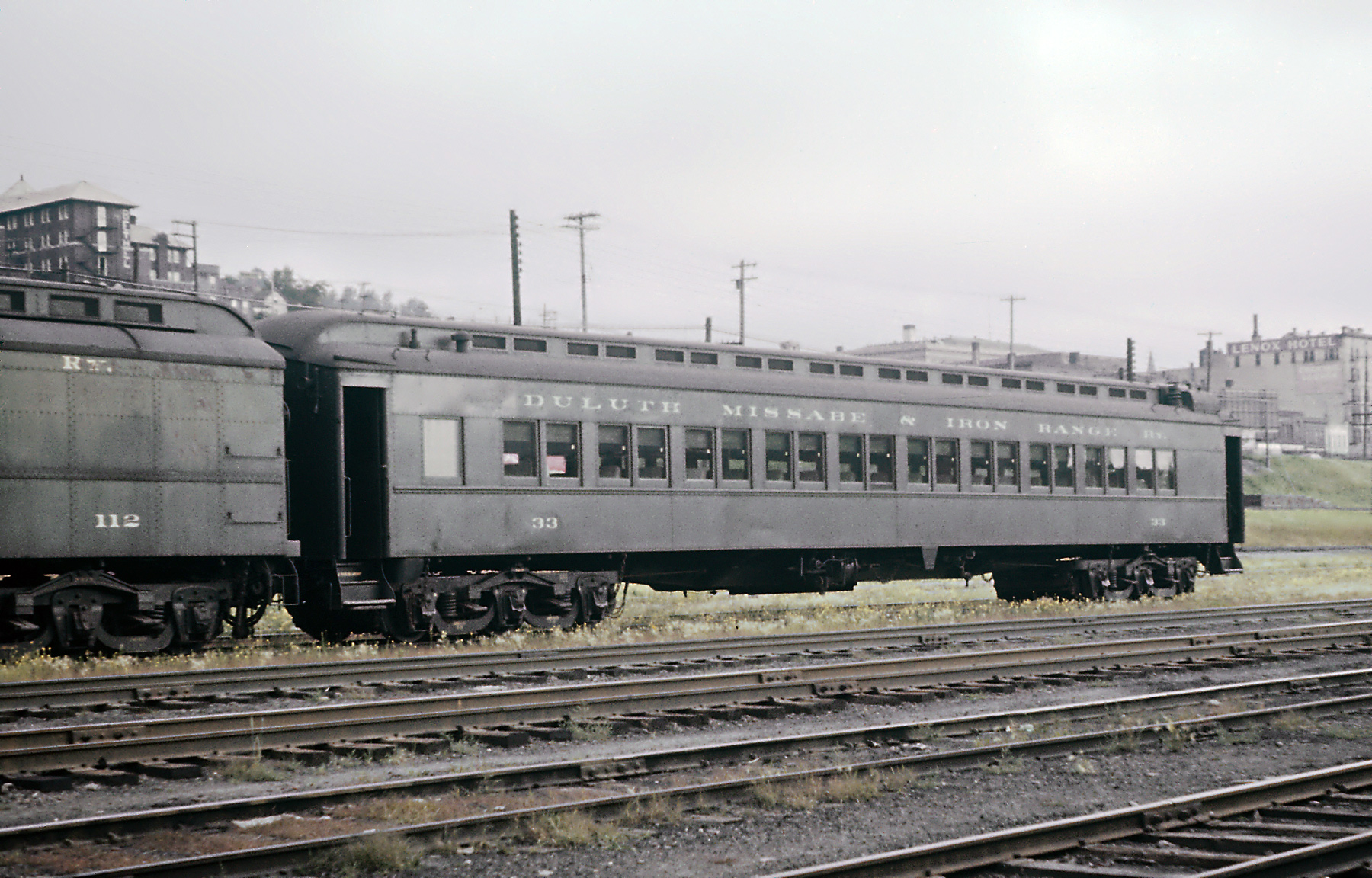 Also developed during the era was the compartment coach, which featured individual, sectioned seating areas (usually two seats facing one another) with a corridor walkway located along one side of the car.

All of the cars featured vestibules, or the hallway area along the end of the car where a passenger first came on board.

These newly designed coach cars also featured overhead storage compartments so passengers could carry some of their luggage with them on the train.

The streamliner era in general saw the most advances in passenger train car construction, not just coach cars, as company's spared no expensive to get in edge in wooing passengers to their trains.

Comfort, relaxation, and stunning interior and exterior designs became the norm for a railroad's most prominent passenger train(s). 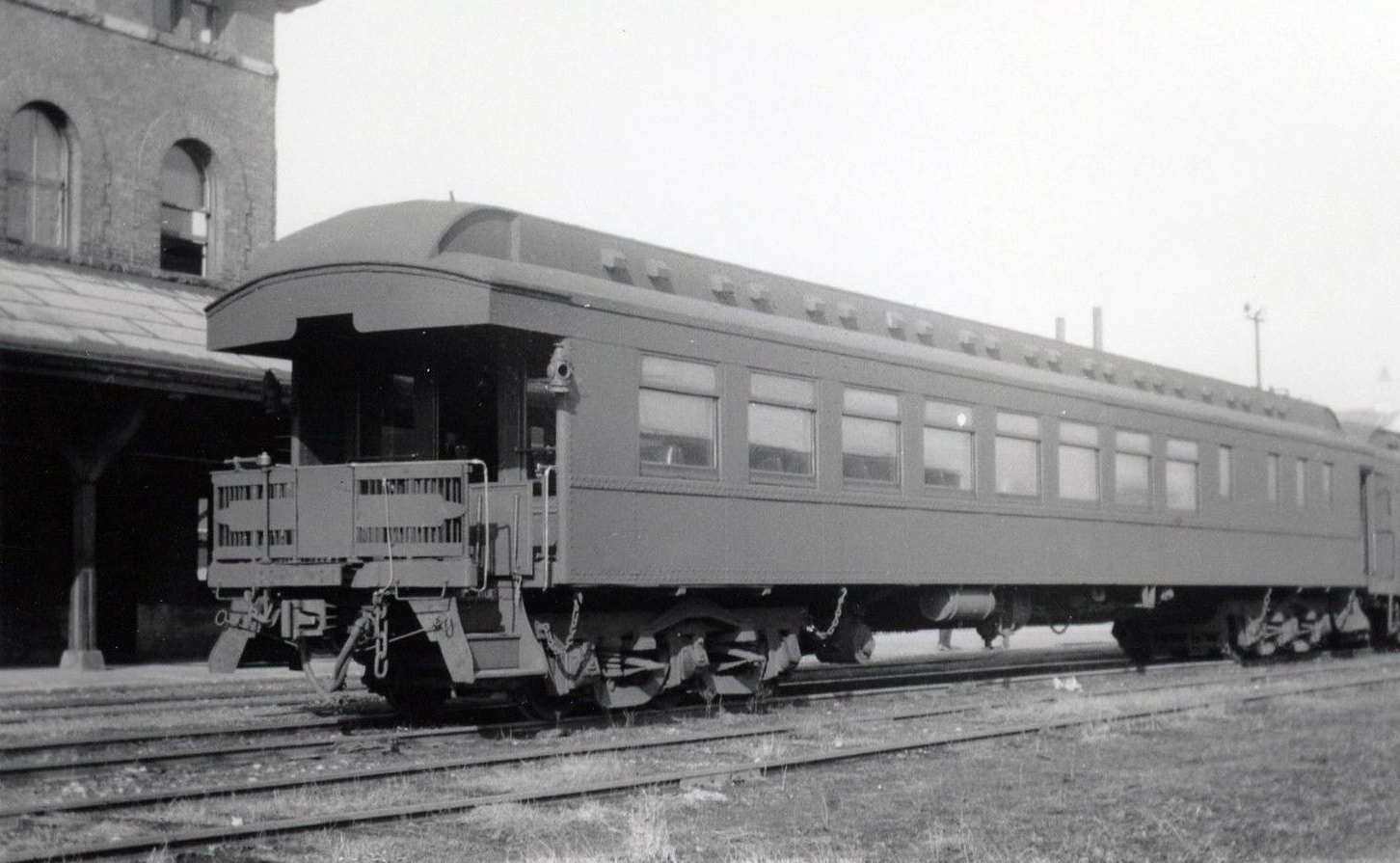 These amazing trains during the 1930 to 1950 era are commonly remembered as the "Golden Age" of passenger railroad travel with sleek streamlined equipment and a round-ended observation car on the rear to complete the look.

Many of these cars were built by the most famous names in passenger train car manufacturing such as Pullman-Standard and the Budd Company.

After the private railroads abandoned passenger trains giving way to Amtrak the national carrier continued to use second-hand equipment for years until the arrival of newer designs like Amfleets and Superliners.

Today, Amtrak's coaches usually come in either an open or compartment setup and feature comfortable individual seats for passengers.

Usually one can also now connect to the Internet or use portable electronic equipment with on board plug-ins and Wi-Fi access. 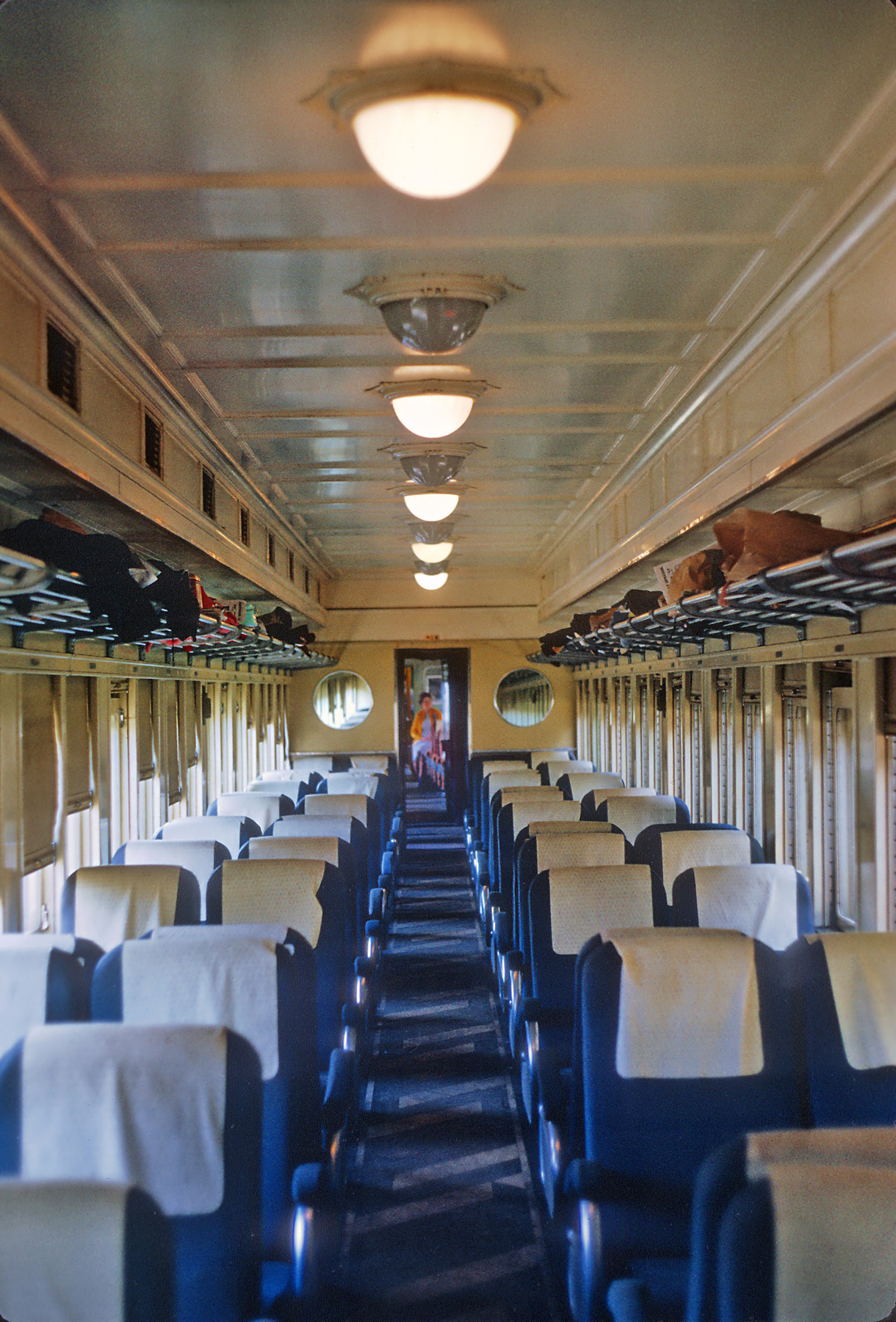 Today, the old standard bench seats found on heavyweight coaches have long since been relegated to history.

However, you can still ride aboard a train equipped with them by taking one of the many tourist/excursion trains found across the country. 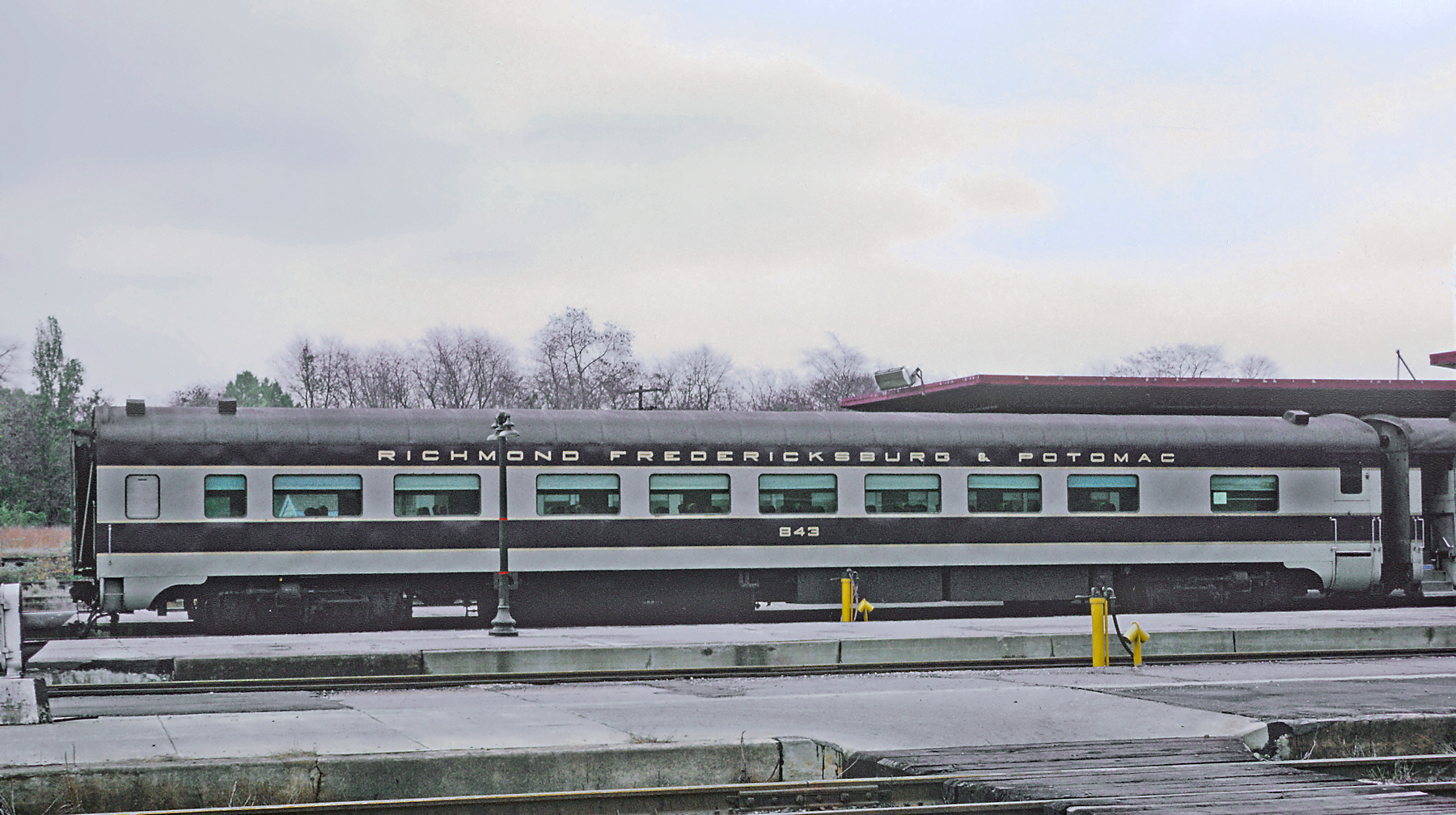 Perhaps the most finely preserved and equipped railroad to operate these old cars is the Strasburg Railroad in Pennsylvania.

Likewise, many of the famous streamlined coaches are also gone, although you can also still find on tourist lines as well, including some of the more plush operations such as the Grand Canyon Railway and Napa Valley Wine Train.