The Mount Washington Cog Railway has the distinction of being the very first such system ever put into practical use in the United States when it opened just after the Civil War.

The operation was conceived by Sylvester Marsh who believed the railroad would become a popular tourist attraction after he climbed New Hampshire's Mount Washington in the early 1850s.

Despite considerable backlash his idea proved quite a success and, just like the Manitou & Pike's Peak Railway in Colorado, thousands of folks continue to descend upon Bretten Woods annually to ride his invention.

Interestingly, the railroad does not scale the entire mountain but begins about a quarter of the way up with grades reaching incredible levels, peaking at 36.6%!

For much of its existence the Mount Washington Cog Railway relied on standard steam locomotives.  However, today cheaper, and more environmentally friendly, bio-diesel locomotives complement the historic steamers. 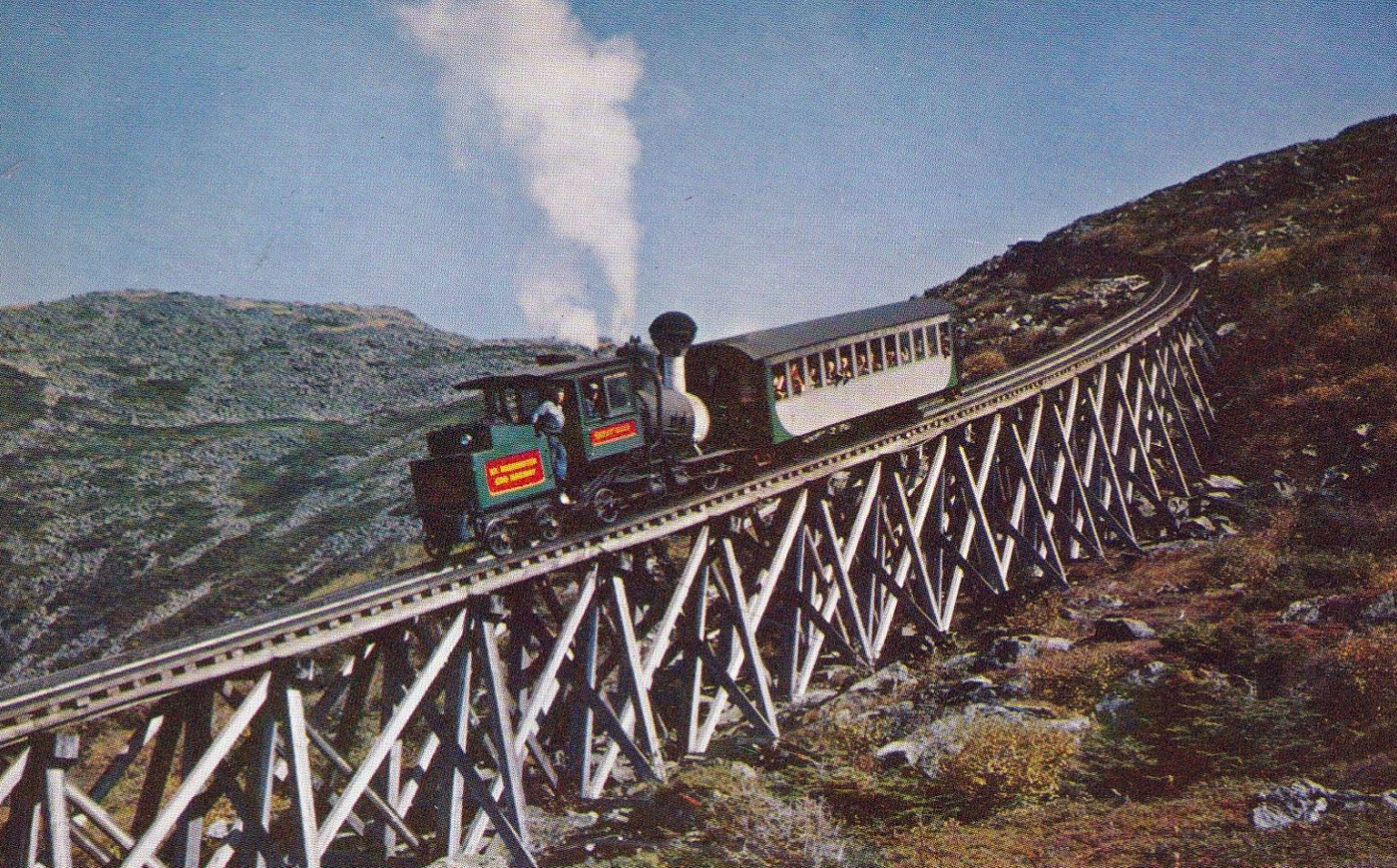 The unique Mount Washington Cog Railway has not only been a popular tourist attraction since the late 1860's but also extensively covered in the media.

At the time of its construction, however, no one believed such technology was conceivable.  The White Mountains of New England have drawn great throngs of people for many years thanks to their incredible beauty and tranquility.  When railroads arrived visitors to the region greatly increased.

The first was the appropriately-named White Mountains Railroad, which opened a line to nearby Littleton about 20 miles away in 1853 (the company would eventually join the Boston & Maine).

Only a year earlier, in the summer of 1852, a retired meat-packer-turned-inventor from Chicago, Sylvester Marsh, had climbed Mount Washington and realized its tourism potential given the spectacular scenery as the tallest slope east of the Mississippi River (6,293 feet).

The mountain afforded views of up to 130 miles in any direction.  On a very clear day one can even see New York State and Canada!  But temperatures at the top are brutal and arctic-like; the summit is well above timberline (sans trees) and storms can produce wind speeds above 230 mph!

In their article from the June, 1941 issue of Trains Magazine entitled "Geared To The Mountains" authors Lincoln Warren and H.S. Walker noted the summit contained 126 different species of sub-arctic plants and 63 arctic plants. 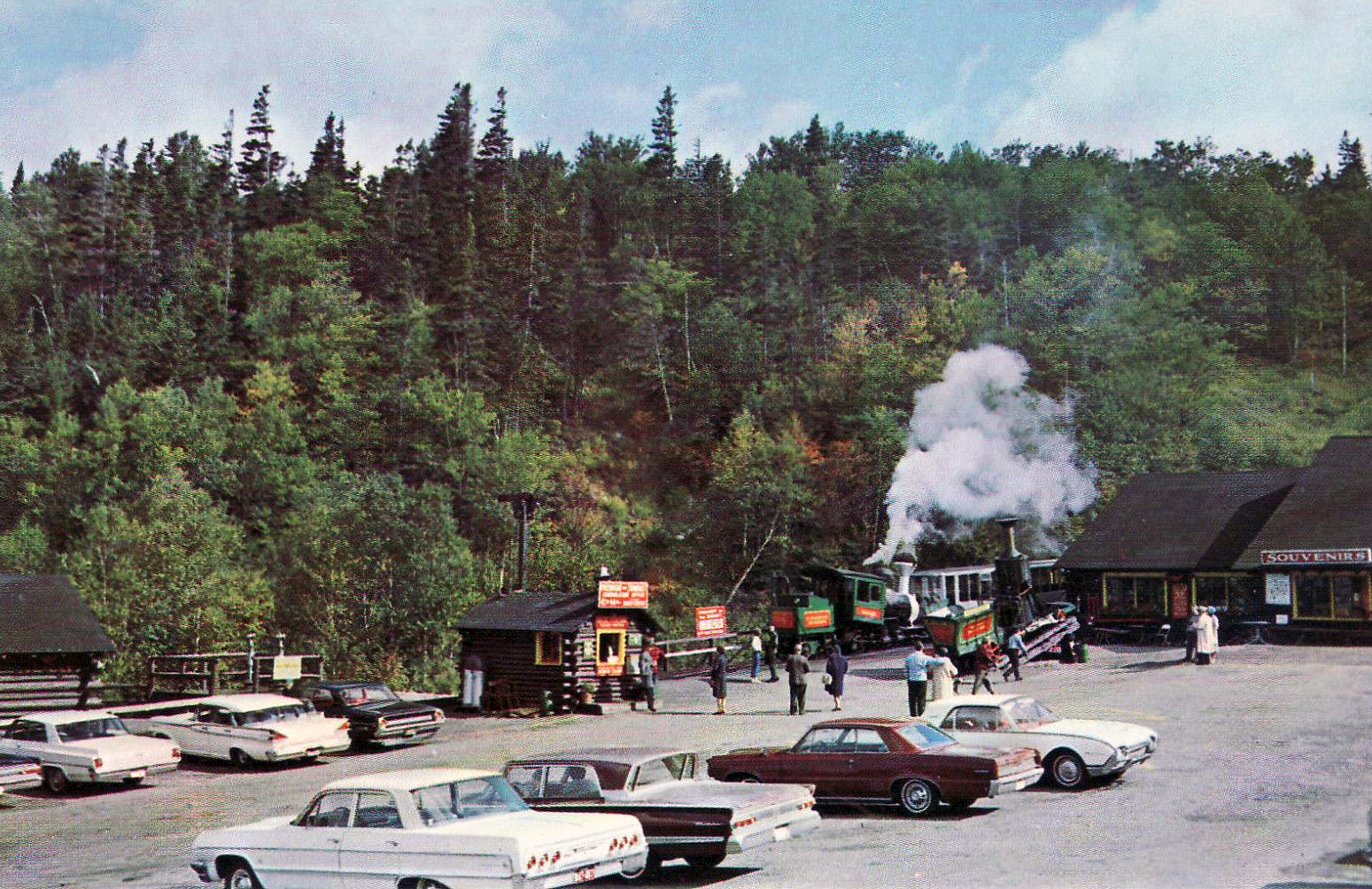 Marsh realized that transporting patrons to the top would require some type of specialized machine.  While railroads were the most practical means of travel, engineering a traditional right-of-way was simply not possible.

Instead, a cog, or rack, railway system would be needed as similar designs were already in use in other parts of the world.  Marsh began developing his idea in 1855 and by the spring of 1858 decided it was ready for testing.

Using a model locomotive and a short stretch of track he presented the contraption to the New Hampshire State Legislature.

His cog system (later patented on September 10, 1861 and known as the Marsh System) ultimately won over those in attendance despite their heavy skepticism (so skeptical, in fact, they said his railroad might as well reach the moon!).

While his charter was approved securing financial backing initially proved difficult.  As a result he was forced to use $5,000 of his own money to construct another short section of test track, this one actual size.

It was built at Cold Spring Hill (along what is now the Mount Washington Cog Railway's opening section) and roughly a quarter-mile in length.

The demonstration occurred on August 29, 1866 and the public was incredibly impressed with his system which used a simple, ladder-like rack sported by outside-bracing "L" shaped rails. 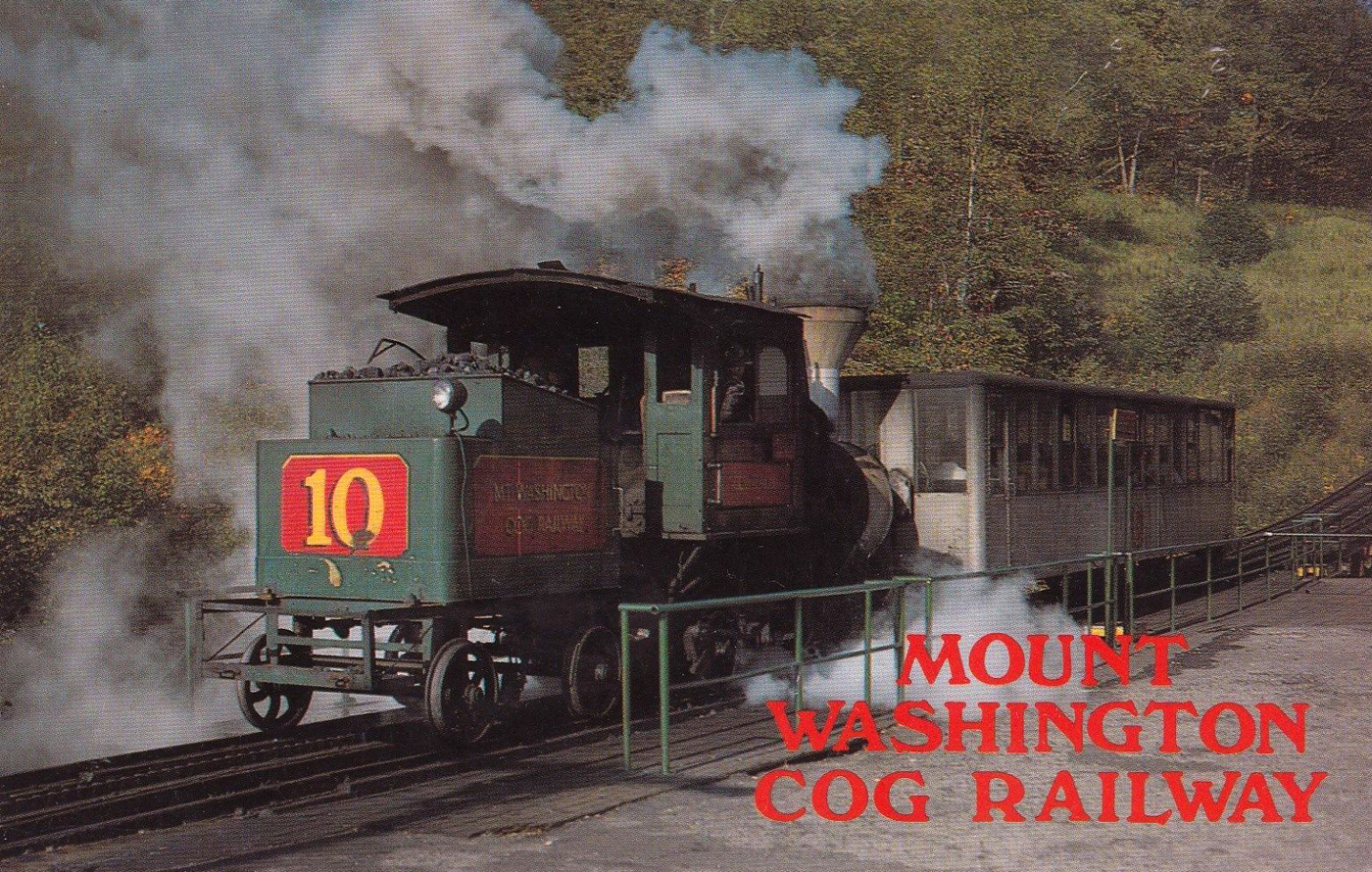 This was engaged by pinions on the locomotive with deep-setting teeth to not only "grab" the rack securely but also keep two teeth engaged at all times for added safety.

"The engine rode along on the two outer standard tram rails and simultaneously the large toothed cog wheel meshed with the pins in the rack rail and thus the engine literally pulled itself up the hill and 'hand-over-hand' fashion.

The center rack-rail was composed of two pieces of angle iron 3 inches wide, placed on their edges parallel to each other. They were connected every 4 inches with strong pins 1 ½ inches in diameter.

The locomotive pushed a passenger car ahead of it.  The coach was about 25 feet long running on four wheels and was not connected to the engine.

Instead it had a roller buffer which allowed free lateral and vertical motion on the grades.  The engine came down the mountain in the same position so that there was no need for turning the train at the top." 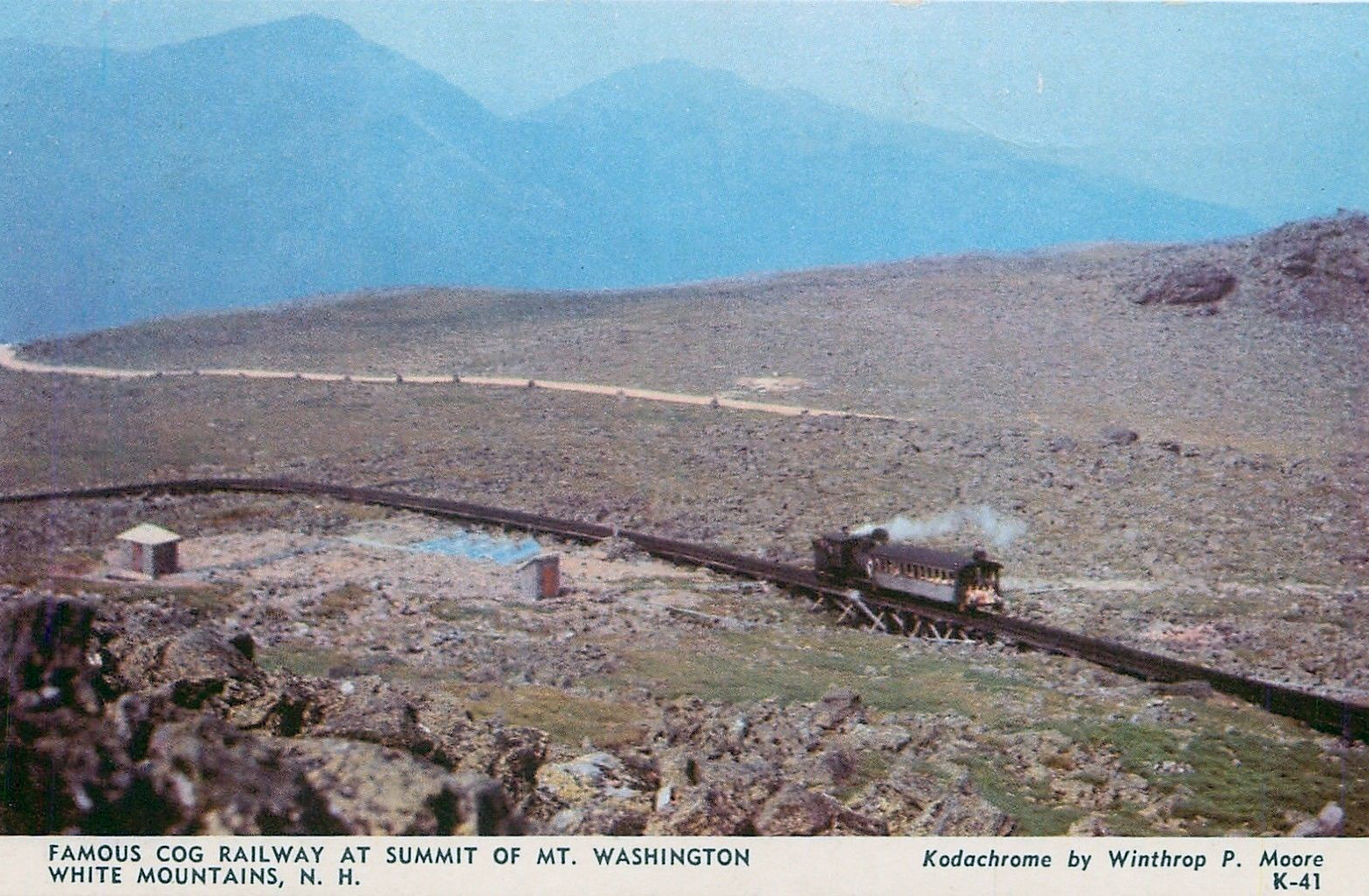 The success of the initial demonstration allowed for the railroad's formation (with Marsh nominated as president) and private funding.  By 1867, one mile was ready for service and on August 14, 1868 the line reached Jacob's Ladder.

This point is significant for two reasons; first, it roughly marked timberline and second, it is the railroad's most impressive segment from both a visual and engineering standpoint.

The Ladder is the steepest component with a gradient of 36.6%!  To put this into perspective, the train climbs one foot for about every three feet of  distance.

In railroading terms this is completely impractical; a 3% grade along a traditional right-of-way is considered quite steep and a typical train can simply not scale the Mount Washington Cog Railway.

When originally completed Jacob's Ladder was 200 feet long with a wooden trestle that rose nearly 30 feet above the mountain.

However, the 1938 New England Hurricane devastated the region and dealt considerable damage to the railroad, including destruction of Jacob's Ladder.  When rebuilt it was 325 feet long although the trestle rose only 20 feet above the mountain.

By July of 1869 the entire 3.25-mile railroad was opened to the summit at a total cost of $150,000. One of the first dignitaries to ride the new system was none other than President Ulysses Grant, the heralded Union general which had helped win the Civil War for the North.

The first steam locomotive used was an upright boiler design named Old Peppersass, #1 (which also went by the name of Hero and Peppersauce, it was originally purchased at a cost of $15,000).

It somewhat resembled the Baltimore & Ohio's Tom Thumb and featured a trailing tender with a rating of between 45 and 50 horsepower.

It was slightly angled to remain at a level position while climbing the mountain and pushed a single passenger car, a practice still used today as an added safety measure (locomotives also lead the way on the journey back down for the same reason).

The railroad would eventually roster a fleet of steam locomotives that looked more like traditional designs with an enclosed cab and tender but featuring a slightly angled horizontal boiler (about 10 degrees) so water always remained above the crownsheet.

These later units bore names like Cloud, Atlas, and George Stephenson.  Soon after the cog opened the Boston, Concord & Montreal Railroad, which acquired the White Mountains Railroad, completed a branch from Littleton to Bretten Woods which provided guests with a more comfortable means to reach the location.

Thanks to S.S Worthen's "Steep But Slow" from the July, 1956 issue of Trains as a reference for this article. 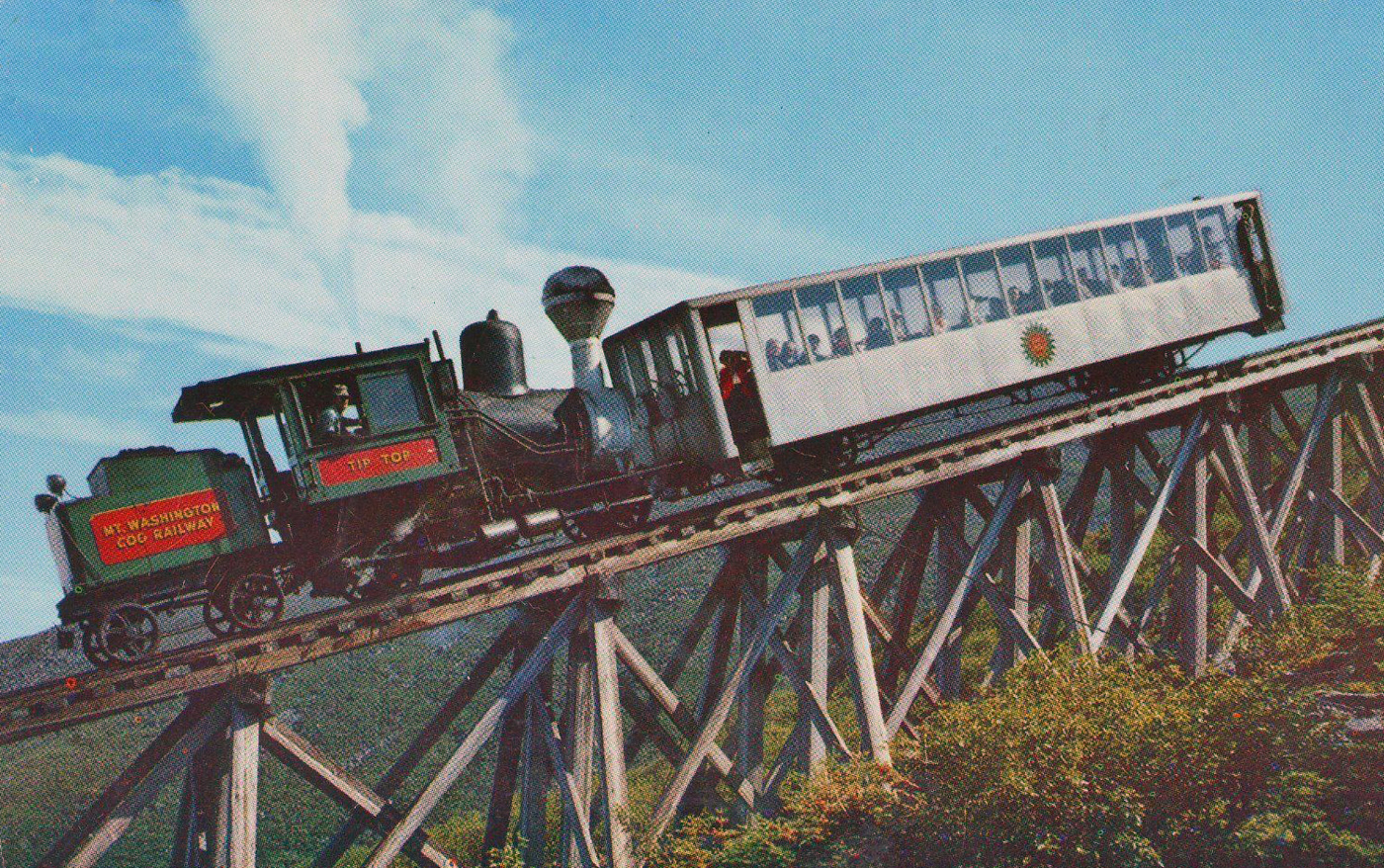 Trains have always been limited to a speed of 2.5 mph, sometimes less along the steeper segments.  The ascent usually requires 75 minutes while the return only slightly faster at 70 minutes.

Since the 19th century not much has changed; today, the branch from Littleton is no longer in operation and the cog line is once again disconnected from the national rail network. It still utilizes some of its 0-2-2-0 steam locomotives although the historic units, which date to the early 20th century, have larger been replaced.

In 2008 it acquired a biodiesel locomotive, #M-1 and now operates four of these, numbered M-1 through M-4.  The very first made its inaugural run on May 31st that season.  These locomotives are powered by 12.5 liter, 6125 series diesel engine built by John Deere which can produce 600 horsepower at 2,100 rpm.

While the biodiesels are more environmentally friendly they are also much cheaper to operate.  Each trip for a steam locomotive required roughly 1 ton of coal and 1,000 gallons of water.  By comparison, a diesel consumes 17 to 18 gallons of biodiesel.

In terms of actual costs savings, the biodiesel can make roughly three trips to the summit for every one trip by the historic steamers.

Interestingly, the railroad still owns nearly every steam locomotive it ever rostered although some are now either on display or stored. To learn more about the Mount Washington Cog Railway please click here to visit their official website.