Despite its underdog status in third place behind the Pennsylvania Railroad and New York Central in the East Coast to Midwest markets the Baltimore & Ohio fielded an impressive fleet of streamliners and passenger trains with top notch service.

One of these runs was the Columbian, which started out serving the New York to Washington market in the late 1930s but then was moved to the much longer Washington to Chicago corridor a few years later.

During its early years the train proved exceptionally successful for the B&O and was regularly sold out.

However, by the 1950s patronage began to decline and it was eventually combined with the two other trains, notably the Capitol Limited.  Finally, during the mid-1960s the railroad dropped the Columbian name altogether. 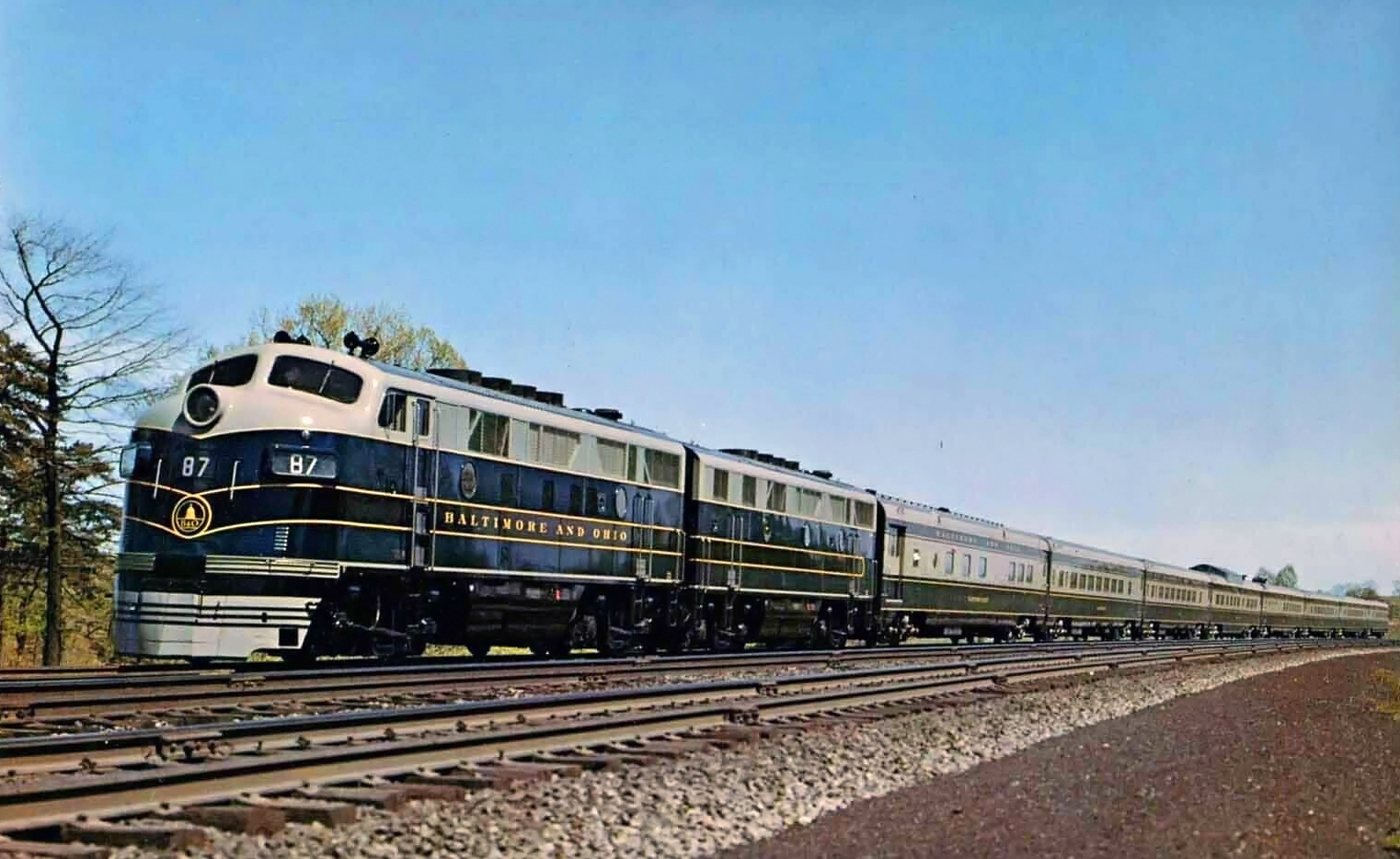 Another of the many publicity photos the Baltimore & Ohio captured of its new, all-coach service, the "Columbian," in the spring of 1949. Note the Strata-Dome (built by Pullman-Standard) mid-train. This scene depicts the train posed westbound east of Cumberland, Maryland.

For years the Baltimore & Ohio battled with the Pennsy for dominance in the New York to Baltimore market.

Even at the time this fight seemed very lopsided; the PRR owned a fast, electrified, duel-track main line between those two points while the B&O needed help reaching New York via the Philadelphia & Reading (Reading) and Central Railroad Of New Jersey from Philadelphia.

It also did not have direct access to downtown Manhattan as did the PRR and had to settle on ferry service from the CNJ's terminal in Jersey City, New Jersey.

Still, the B&O was a fighter and inaugurated the Royal Blue on July 31, 1890.  It was once canceled during World War I but soon relaunched during the early 1920s.

When the streamliner era took off a decade later the B&O wasted no time getting in on the act, rechristening the Royal Blue on April 25, 1937 with lightweight, aluminum cars and a streamlined bullet-nose P-7 Class 4-6-2 Pacific for power, #5304 (this was soon replaced but the new streamlined diesels of Electro-Motive, the EA and cabless EB).

Despite the railroad's inferior route and terminal point the new streamliner immediately gave the B&O an advantage over the Pennsy, which had yet to inaugurate such a train.

To complement the revamped Royal Blue the B&O relaunched its companion train during December of 1937; known as the Columbian the train's consist was an all-coach affair using rebuilt, modernized, and streamlined heavyweight cars powered by the new EAs. 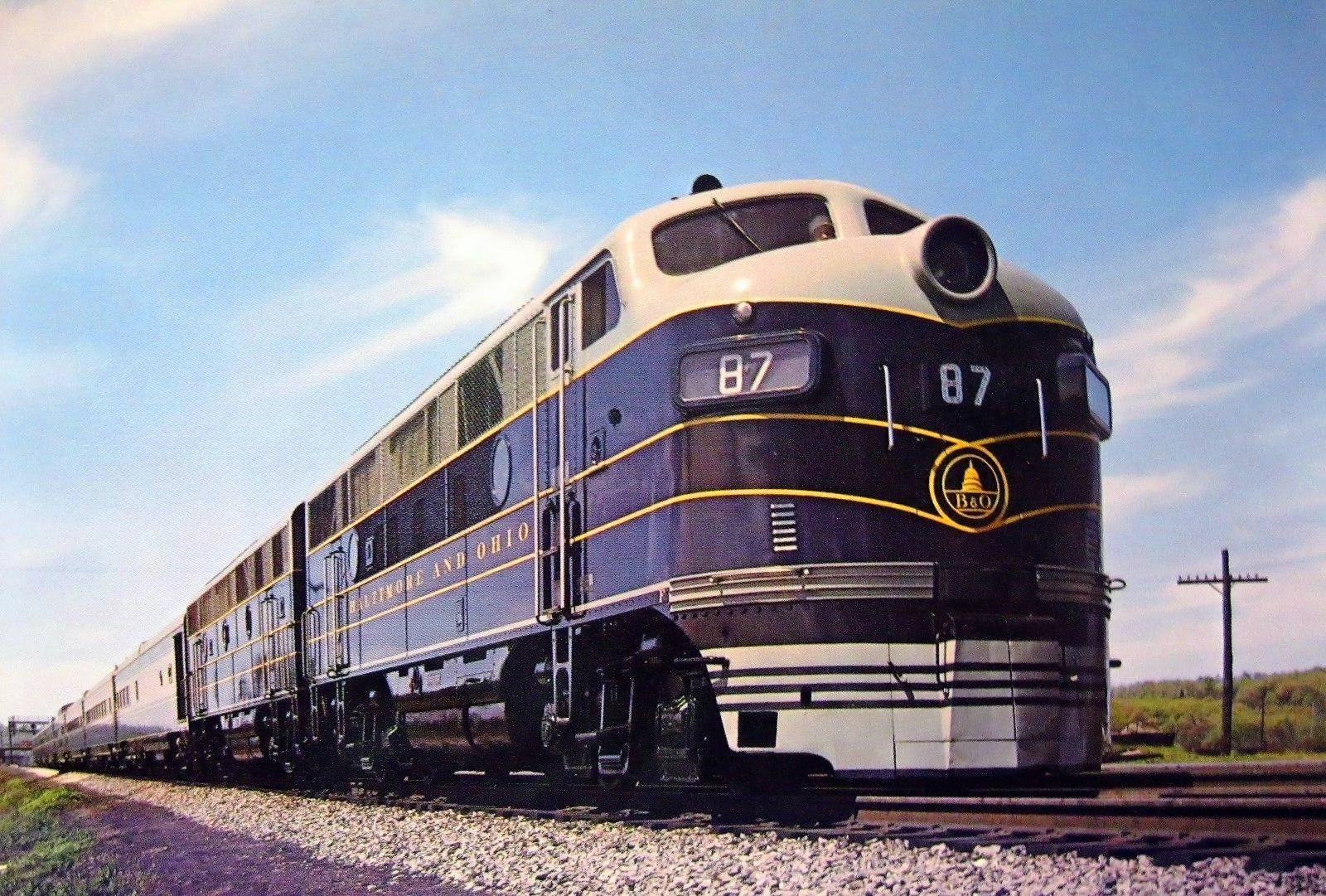 Another Baltimore & Ohio publicity photo of the newly reequipped, "Columbian" (Chicago - Washington/Baltimore - New York) heading eastbound on the Cumberland Division/East End in April of 1949 just before it entered service. The train's consist seen here included the Coffee-Shoppe "Harpers Ferry," a pair of reclining seat coaches ("McKeesport" and "Gary"), the all-new Strata-Dome lounge "High Dome" (first domes in the East), two additional coaches, a diner, and the observation-buffet-lounge "Chicago." A high-class affair for what was largely a coach-only train!

In truth, the Columbian was not all that new; the B&O had first launched it on May 24, 1931 (#25 westbound and #26 eastbound) operating with heavyweight equipment and advertised as the first train in the country with air-conditioning.

As one of the initial roads to begin streamlining its trains the B&O was also noteworthy for being the first Eastern system to use streamlined diesels, the aforementioned EAs/EBs that powered the Capitol Limited, National Limited, Royal Blue, and Columbian.  According to one of the B&O's marketing campaigns:

"When you ticket passengers to and from New York via the Baltimore & Ohio they have the advantage of 17 station stops in Great New York.

Upon arriving in Jersey City, they step from the train into comfortable, streamlined motor coaches that take passengers and their hand baggage right from the trainside to any of 17 places in New York and Brooklyn, including a number of leading hotels. 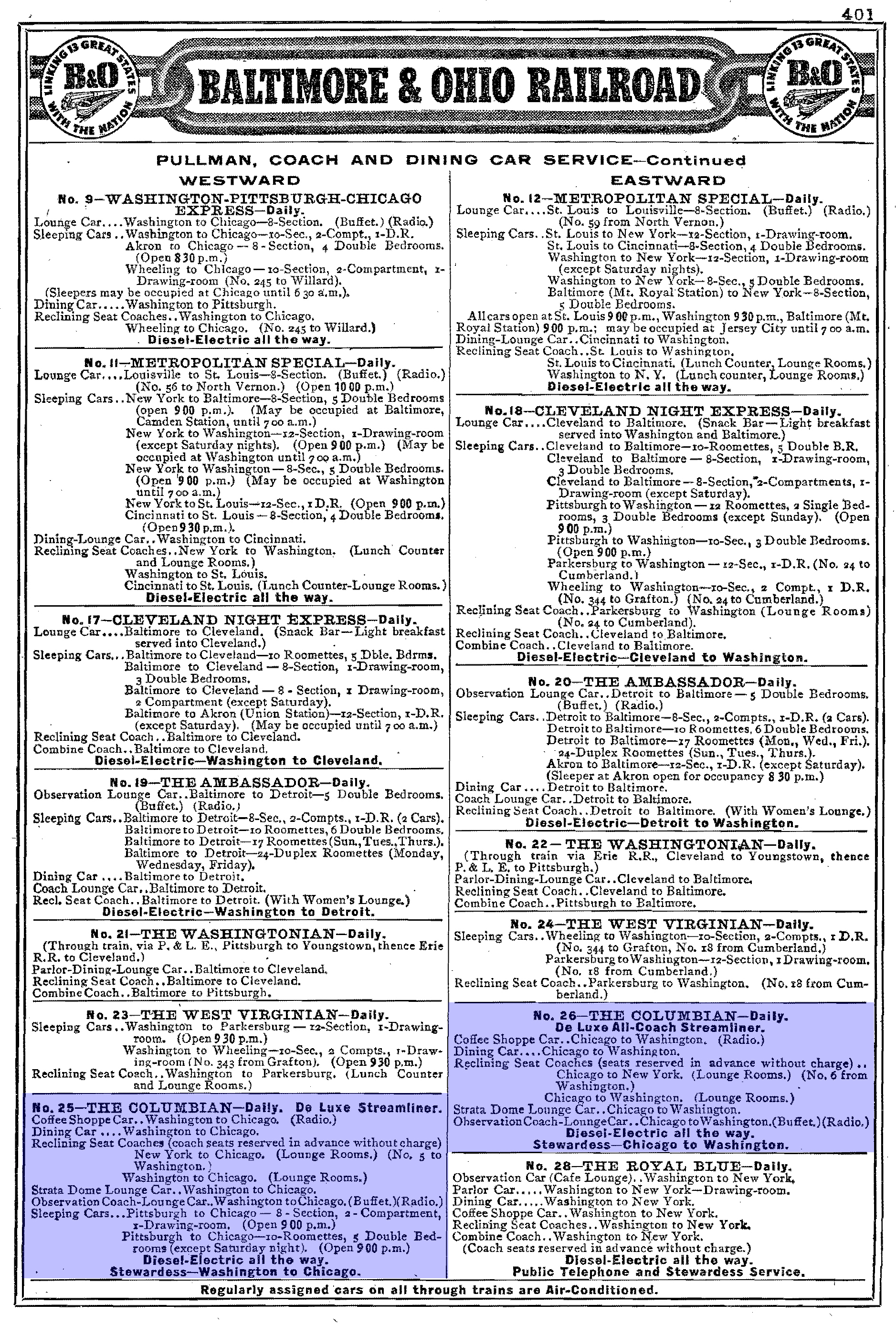 No bother with hand baggage.  Checked on the train it is delivered to passengers when they leave the coach.  No traffic worries, no taxicab expense, no tips, no long walks - and there's no extra charge.

Leaving New York, there is available the same convenient service.  Baltimore & Ohio fast, frequent, air-conditioned trains to and from New York including the Shenandoah and Fort Pitt Limited, to and from Pittsburgh and Chicago, and the National Limited and the Diplomat to and from Cincinnati, Louisville, and St. Louis.  Also, the streamlined Royal Blue and Columbian between Washington, Baltimore, Philadelphia, and New York, featuring new ideas in streamlined trains."

Not to be outdone, the Pennsy flexed its muscles and soon streamlined its Trail Blazer, operating between New York and Chicago.  In an effort to keep up the B&O matched its competitor by lengthening the route of the Columbian and sent it all of the to Chicago as well on a schedule similar to the Capitol Limited. 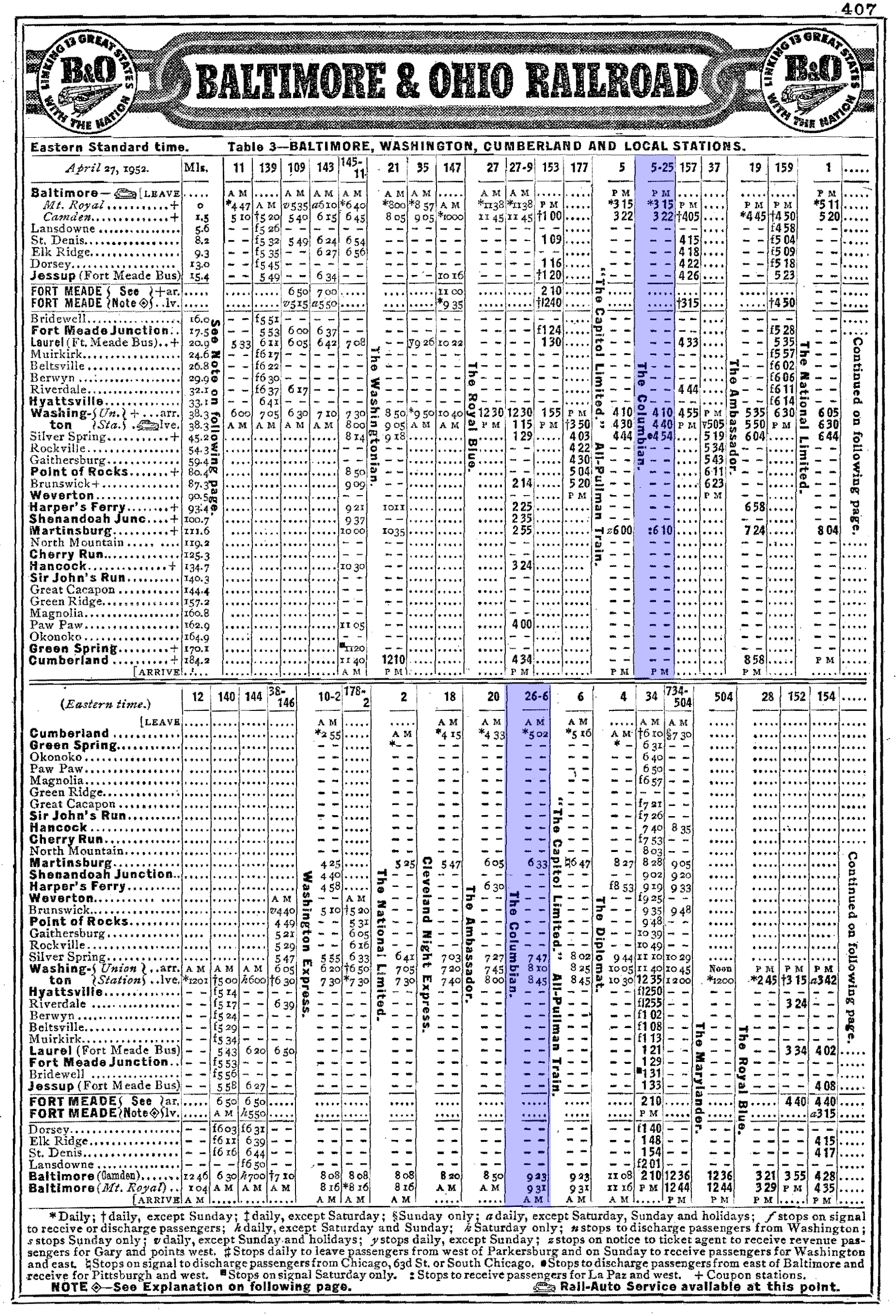 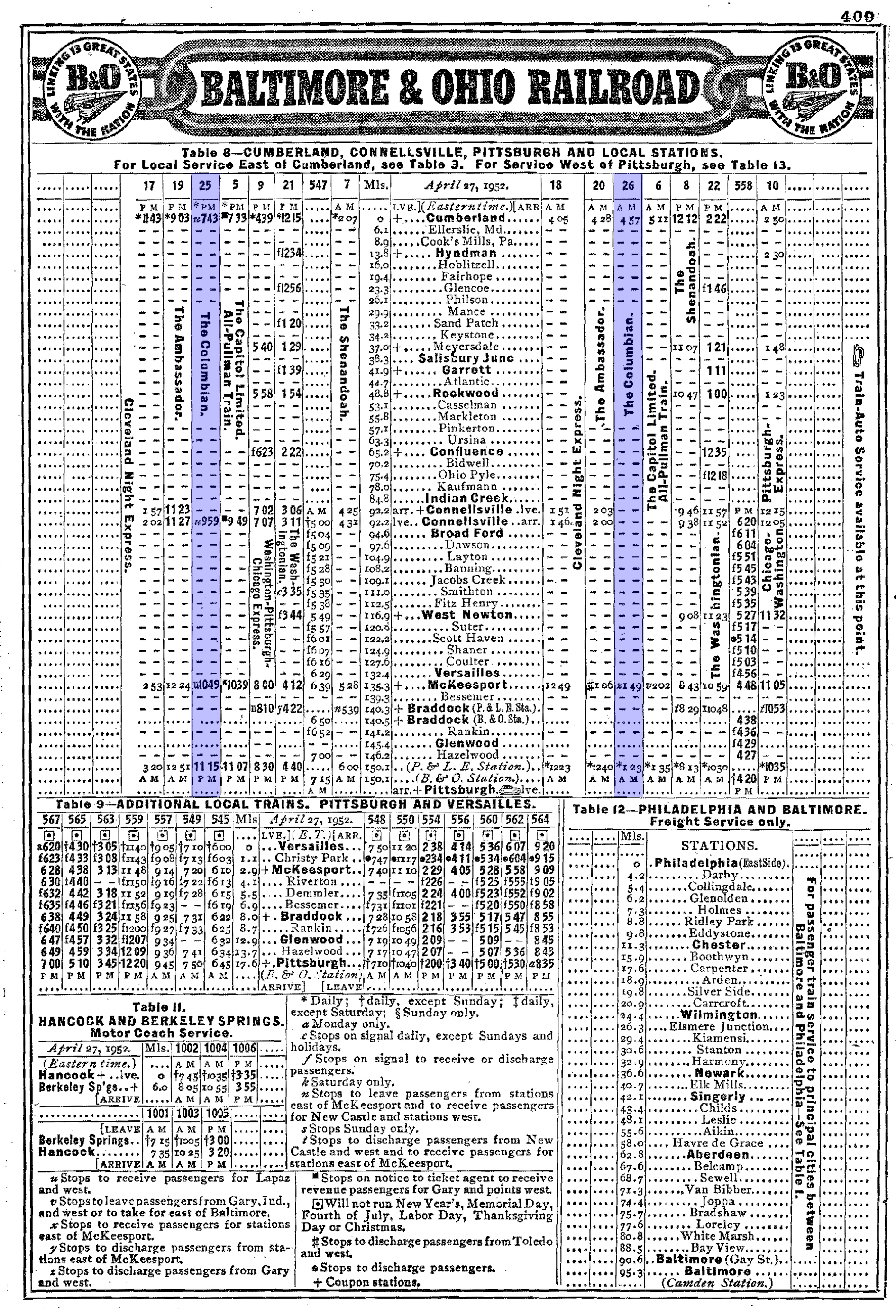 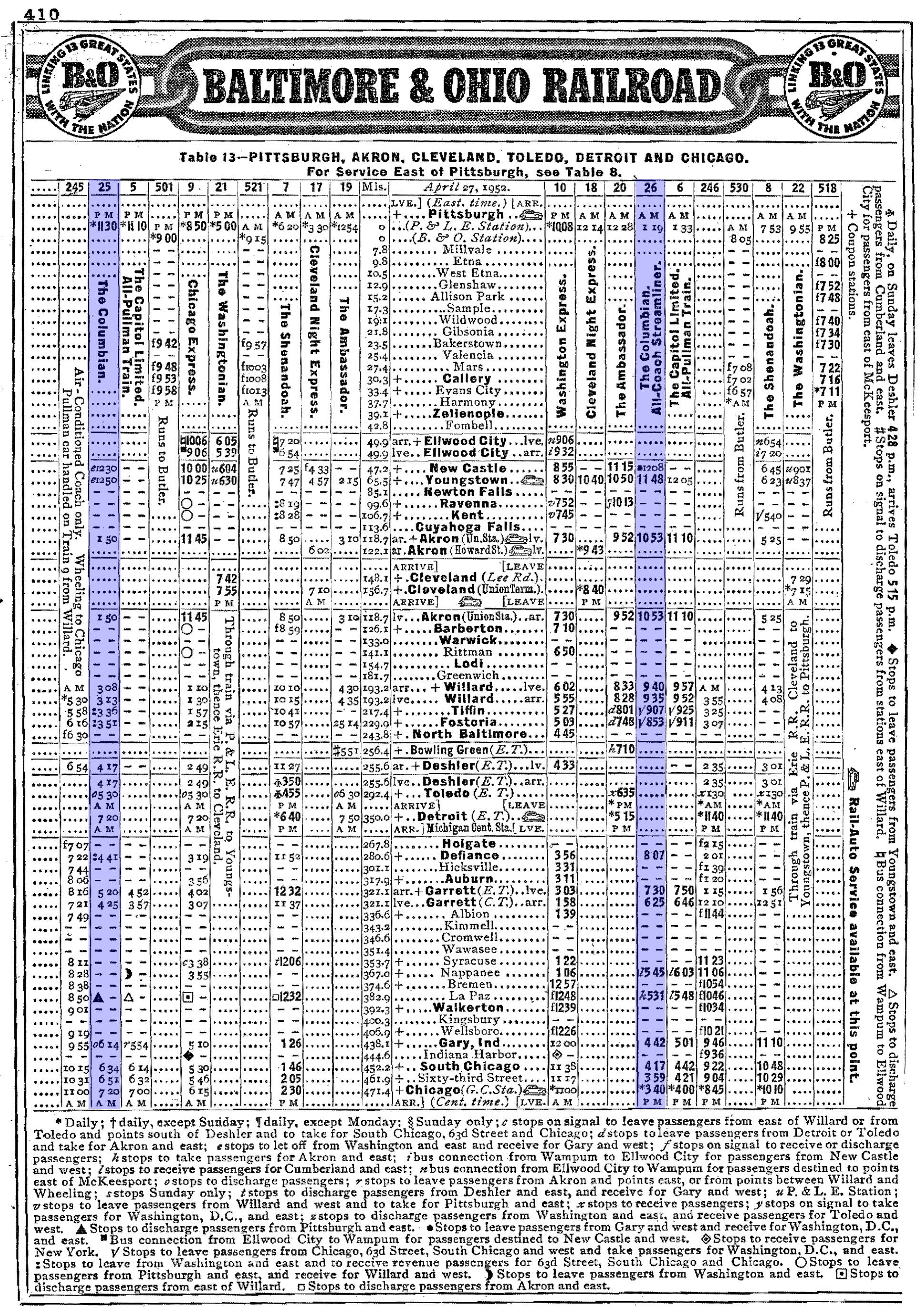 The train was re-inaugurated in December of 1941 with this new schedule and rebuilt equipment.  It enjoyed a very high level of success throughout the war years and as Joe Welsh notes in his book, Baltimore & Ohio's Capitol Limited And National Limited, the train ran full throughout this time.

During 1945 the B&O reequipped the train with new E7As and during December of that year placed an order with Pullman-Standard for two brand new coach trainsets which arrived in 1949. 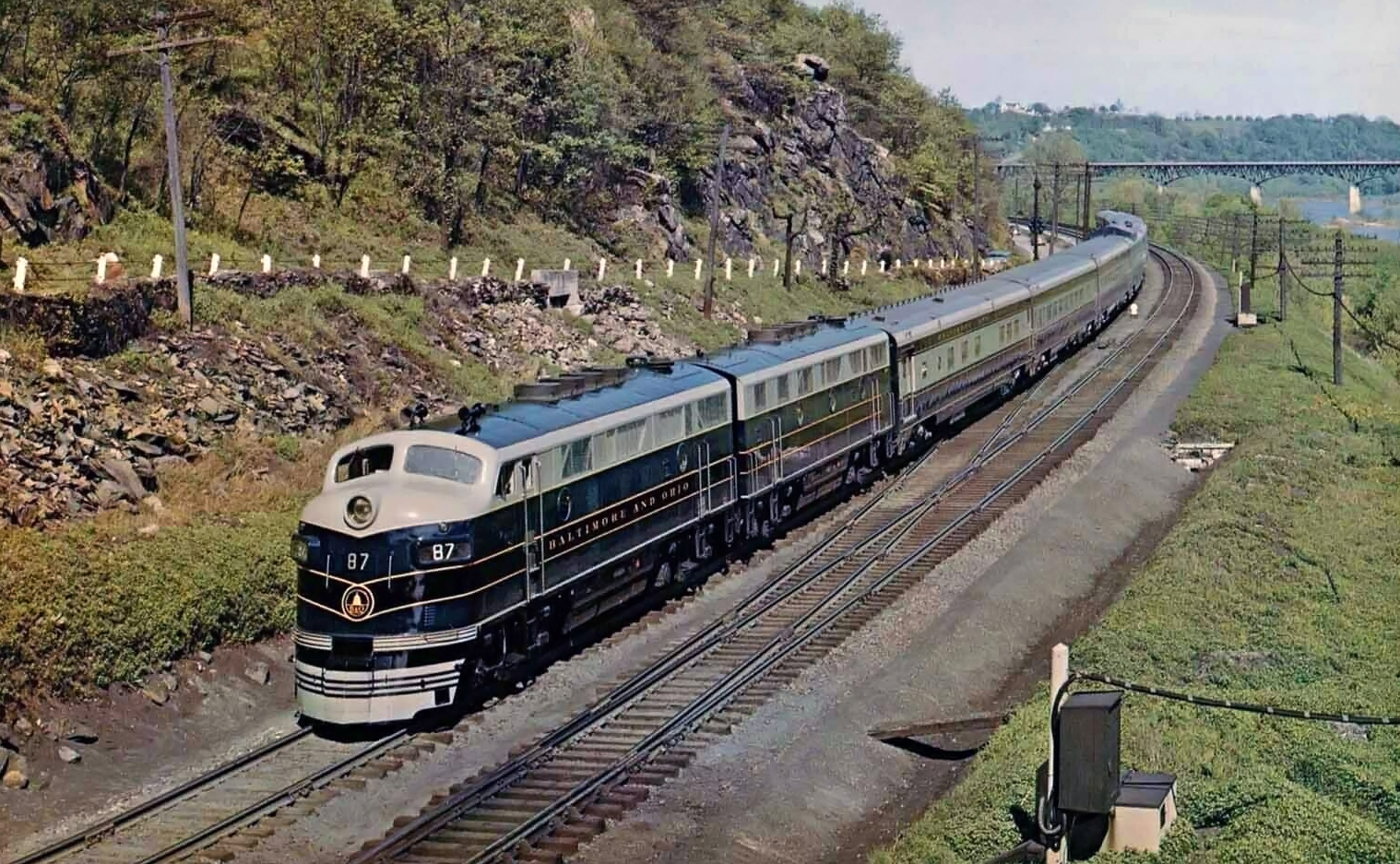 The Baltimore & Ohio took a tremendous amount of photos publicizing its new "Columbian" trainset. It is seen here posed westbound along the main line skirting the Potomac River a few miles east of Harpers Ferry in the spring of 1949. The train's consist included coffee-shoppe car "Harpers Ferry," coaches "McKeesport" and "Gary," coach-lounge Strata-Dome "High Dome," a diner, two more coaches, and finally the coach-lounge-observation "Chicago." The B&O touted this service as an all-coach consist although it also included a 8 section/4 double-bedroom sleeper between Chicago and Pittsburgh. Author's collection.

This new equipment would be the train's pinnacle as its sported such amenities as a buffet and tavern lounge bar/observation to the Strata-Domes offering unparalleled vistas of the countryside.

The Pennsy could not use domes due to clearance issues so this was an advantage the B&O always held.  The Columbian was an eight-car consist in all and used brand new F3A/Bs for power, #87A-88A and #87x-88x (Bs).  Adorned in the railroad's regal royal blue and grey with gold pinstripes it was a very elegant train. 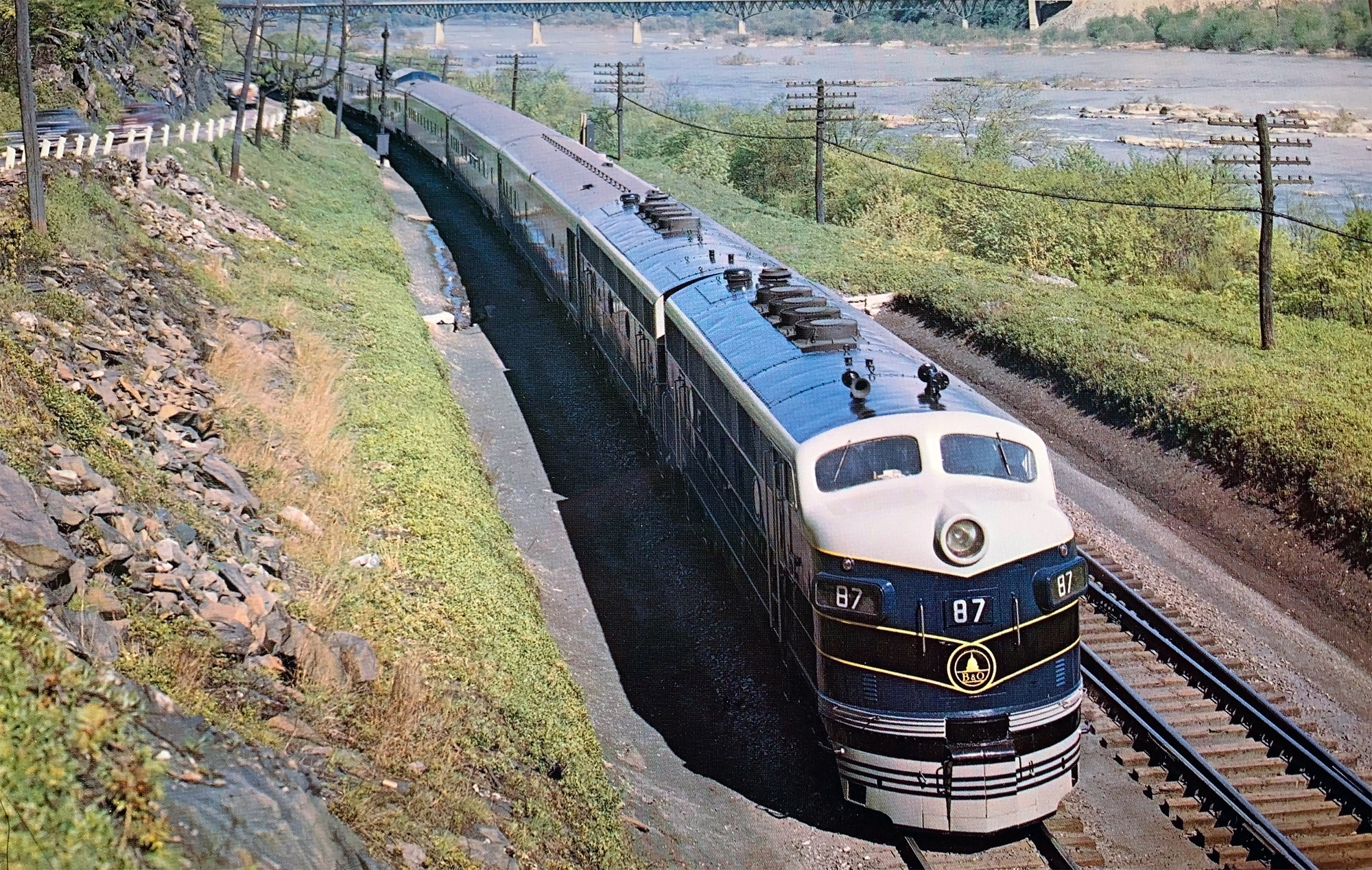 In this publicity photo of the very same "Columbian" consist featured at the top of this article, the train has been photographed from a slightly different angle. Author's collection.

Unfortunately, the train's decline began almost immediately post-war and continued through the 1950s.  By 1952, the Columbian was cutback to Washington, D.C., discontinuing service direct to New York.  Shortly thereafter the B&O combined the train with the Ambassador between Washington, D.C. and Willard, Ohio in January of 1954.

During April of 1958 the Royal Blue was canceled as the B&O ceded defeat to the Pennsy in this market entirely. A year later, in 1959, the Columbian was permanently combined with the flagship Capitol Limited, which spelled the train's end.

By this time the B&O was already in serious financial trouble and was attempting to cut costs wherever possible.  Further cutbacks continued as in October of 1961 the Capitol Limited, Columbian, and Ambassador were all combined as one train east of Willard.

Finally, it was all over after April 26, 1964 when the B&O quietly eliminated the Columbian name from its timetable ending a train that had been in service for more than 30 years.