The Commodore Vanderbilt, named for New York Central's most famous leader, was second in stature to only flagship 20th Century Limited.

The train (which should not be confused with a Class J-1 Hudson, #5344, that carried the same name; it was the first NYC streamlined steamer, outshopped in December of 1934) also served the New York to Chicago market and was given the very best of equipment; it was one of the first to receive streamlined cars and powered by perhaps the finest steam locomotive ever put into service.

Despite its elite status and opulent accommodations the Commodore saw a short life in the postwar years.   The NYC was fascinated with the streamliner concept, launching its own version in 1935, the test-bed Mercury.

By the postwar period, Central had largely exited the streamlined steam concept but it did succeed in proving the streamliner's success versus traditional, heavyweight equipment of the era.  As ridership continued its disappointing slide the NYC focused on downsizing operations wherever possible, which included the New York-Chicago market.  Following a series of cutbacks the Commodore was removed from the timetable in 1960.

The Commodore Vanderbilt was similar to Pennsylvania's General, a train nearly as luxurious as its flagship and for many railroads would have been considered its top service.

In a way the Commodore and General were essentially another section of those trains given the incredible popularity during the early years of the streamliner age and the high demand encountered for each railroad's services.

When the New York Central rechristened its 20th Century Limited in June of 1938 it also dedicated the Commodore Vanderbilt with predominantly carried lightweight equipment, following an order of sixty-two new streamlined cars which had arrived that year.  Listed as #67 (westbound) and #68 (eastbound) the train boasted elite, all-Pullman status and a blazing fast schedule.

Perhaps more than either its accommodations or sleek equipment, the Commodore Vanderbilt is best remembered for its motive-power.  Along with the 20th Century Limited it was equipped with arguably the most iconic streamlined steam locomotive ever put into service, the famous Class J-3a Hudsons styled by Henry Dreyfuss in 1938 (the "Dreyfuss Hudsons").

The 4-6-4s saw only a few years of service before being replaced by diesels beginning in 1945 and sadly, none of these beautiful machines were preserved.  Since the 20th Century Limited always fielded the absolute best equipment the Commodore would occasionally receive second-hand cars, or hand-me-downs from its more prestigious cousin (such as the 20th's old twin-unit diner).

Following a massive order of 720 cars during the late 1940s the Commodore, and most of NYC's other top trains, were reequipped with new lightweight cars from Budd, Pullman-Standard, and American Car & Foundry.

According to the railroad's 1950 timetable the train's consist included:


According to Geoffrey Doughty's book, "New York Central's Great Steel Fleet: 1948-1967," the train would occasionally run with older equipment if a newer lightweight was needed on the 20th Century Limited, such as an older 5-double bedroom sleeper-observation built by Budd, originally for the Southwestern Limited.

The Commodore's 17-hour schedule was just as fast the 20th's: westbound #67 would leave New York at 4:30 PM in the afternoon and arrive in Chicago the next morning for breakfast at 7:30 AM; conversely #68 would depart La Salle Street Station at 3:00 PM and return to Grand Central Terminal at 8:00 AM the next morning.

(The below Commodore Vanderbilt timetable is dated effective June 18, 1950.) 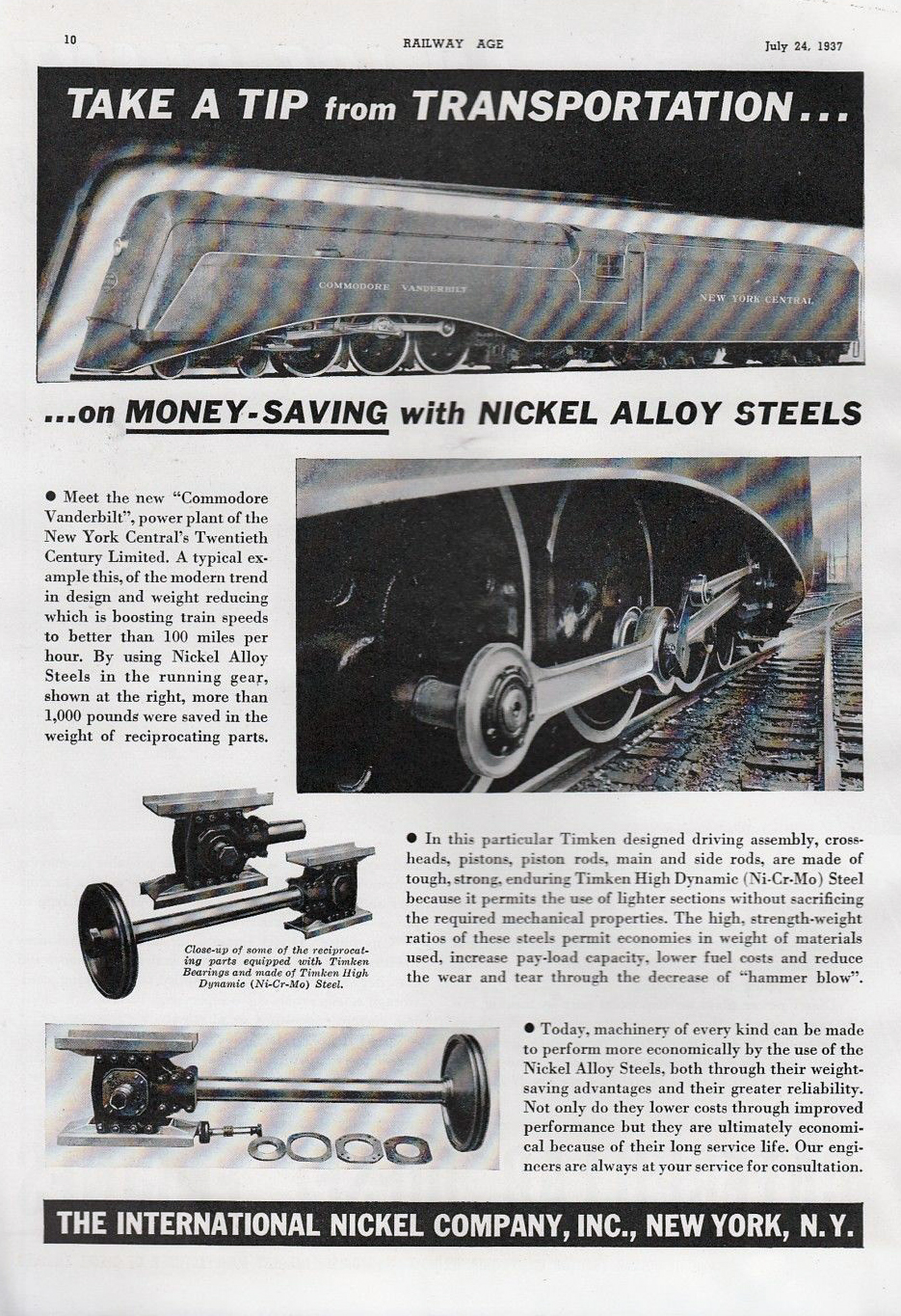 Aside from its Chicago-New York cars the Commodore, after 1953, also carried some transcontinental sleepers via the Santa Fe and Union Pacific/Chicago & North Western.

Prior to then its running mate, the Advance Commodore Vanderbilt, usually handled these cars.  Perhaps, though, it was also an ominous sign of the growing struggles associated with passenger operations.  Despite Central's best efforts and millions spent to lure patrons back to the rails it was largely a losing endeavor.

The railroad posted losses of $53 million in 1953.  Of course, it was not alone; rival Pennsylvania and most other lines were experiencing similar doldrums, unable to stop the growing declines in ridership as the public shifted their attention to improved highways and automobiles along with the speed and convenience of airlines and the jet age.

Since the need for dual trains covering the same route, particularly luxurious services, dwindled in the postwar period the decline of names like the Commodore Vanderbilt and General were, sadly, swift.

In 1957 the train was combined with the 20th Century Limited during the summer months and then combined permanently after April 27, 1958.  Its name remained for a few more years but was quietly removed from the timetable on October 30, 1960.  Once such a crack service on the Central had been downgraded and removed entirely in only a few years' time.