The train conductor is the entry-level position in today's railroad industry; salary for this job varies but you can typically expect to start out at around $50,000.

If you decide a position as a train crewman/woman is your career choice of interest there is a catch, it requires the absolute greatest level of responsibility.

The position is one of the oldest, and while technologies have vastly improved since the early 19th century, the conductor's role has actually changed very little over the years in terms of his or her job requirements.

In this profession you are the senior authority on the train (regardless of years worked) and responsible for its destination, its cargo/freight (chemicals, merchandise, bulk products, etc.), and that it arrives safely to its intended destination (or in good hands when your shift ends).

This includes being in a position of authority over the engineer, which is normally the senior position one reaches as part of the train crew.

Typically, Class I's of today will quickly provide engineer training to conductors so the individual can both be qualified to operate the locomotive/train if necessary and be ready for promotion.

If you are interested in a job position as a train conductor peruse the major job search websites or browse the career web pages of railroads in your area.

The supreme authority on any train, freight or passenger, is the train conductor.

This position requires a great deal of responsibility and essentially acts as the head manager, dealing with paperwork and generally being precisely aware of what the train carries at all times.

The conductor is most often associated by the general public with passenger trains where, in the days of yore, he was instantly recognizable in his stately three-piece suit and accompanying hat while going up and down the aisles punching tickets.

Once departure time arrived he would shout "All aboard!", climb on, and give the engineer a wave that it was time to go.

If this type of work interests you it can still be found but not within the private rail industry; only Amtrak, commuter agencies and tourist railroads use conductors in this capacity today (Amtrak also employs assistant conductors).

According to Brian Solomon's book, "Working On The Railroad," the freight conductor's role was typically advanced through the brakeman, an entry-level position requiring a great deal of physical exertion, even after the automatic air brake was invented eliminating the need to manually set a car's brakes.

The brakeman took orders from virtually every other member of the train crew as he threw switches, coupled/uncoupled cars, and protected the train when needed.

These kinds of tasks enabled him to become intimately familiar with day-to-day operations and acted as a stepping-stone to the greater responsibility required of a conductor.

Prior to the modern age of electronics and radio a conductor spent most of his time in the caboose.  His "home away from home" this classic car functioned as an office and sleeping quarters where he was kept company by the rear brakeman, better known as the flagman.

Situated in the caboose he performed paperwork ensuring his train carried the right cars, was blocked correctly, reviewed waybills (a car's lading), looked over timetables and [hand written] train orders, performed a visual inspection of his train, and looked over his route prior to departure for possible meets with other trains.

In addition, any switching en-route required a switch list and correspondence with the brakeman to make sure the proper cars were set out and picked up.

This latter job was a standard procedure during the early 20th century when so many industries relied upon trains and LCL traffic (less than carload) was common.

Today, switching is still performed, both by local and road freights, although not on a regular basis as before.

The engineer's task is to simply operate the train safely and follow all wayside signs and properly read and interpret trackside signals.

Once the train is ready to depart it is the conductor's responsibility to either safely navigate it out of a yard by keeping in contact with the yardmaster, trainmaster, and dispatcher or along the main line.

A long time ago, before radios became standard, there was little communication between the head-end crew (engineer, fireman, and brakeman) and the conductor/flagman.

The only way the two interacted was either through whistle signals from the engineer or the train conductor placing the train into emergency for some particular safety reason (i.e., a detected hot box).

The reason for crews on each of the train was simply for safer operations.

Without the advent of wireless communication and computers, someone needed to be at the rear to visually keep an eye out for any problems ahead (such as the aforementioned hot box) while the flagman provided physical protection for any approaching trains by walking two miles back with a flag, fusees, and torpedoes.

Any problems arose with the train's lading or, worse, a rules violation occurred it was ultimately the conductor's responsibility.

Once upon a time the passenger train conductor was quite common as railroads operated fleets of trains, both long distance and local commuter operations, to serve the public.

It was much less physically demanding than working freight service, and one was always never dirty, although required good people and communication skills as one always interacted with passengers.

Historically, this was the senior position and many conductors spend decades in freight service before being assigned a passenger train.

As one former conductor noted:

"As with all conductors, a passenger conductor's first priority is for the safe and efficient movement of the train, responsible for both the crew and passengers, while keeping it on time."

The passenger conductor received better pay and, in the case of local services, allowed one to return home each night.

Today, just as with freight service, those wishing to work as a passenger conductor must spend several weeks in the classroom before climbing aboard a train.

As radios and computers came into widespread use the train conductor's role changed dramatically although he was still the supreme authoritarian.

The FRED (Flashing Rear End Device) replaced the caboose; a very small telemetry device it monitored air pressure for the train's braking system and carried a small flashing red light to signify the end of the train.

This move placed all of the crew in the head end; coupled with diesels replacing steam as the industry's primary road power the position of flagman and fireman was eventually abolished (although not immediately).

Today, most freight trains carry only a single conductor and engineer while occasionally a brakeman is need for switching chores or other reasons (the conductor most often pulls double-duty in this capacity along with his general responsibilities).

The advent of radio has also abolished physical protection (flagman) and dispatchers from far away places such as Jacksonville (CSX), Norfolk (Norfolk Southern), and Omaha (Union Pacific) directly control a train's safe movement over the road (eliminating the operator).

The bane of any train crew was the dreaded hot box, an overheated journal which sometimes caught fire and had to be addressed immediately.

Today, roller-bearings have largely eliminated this threat while automatic defect detectors monitor for them (and other issues, such as dragging equipment).

In the modern world, the conductor keeps in regular contact with the dispatcher along the way to make sure the train safely navigates its way through signals, interlockings, other yards, crossovers, and any other location where another train may be encountered.

Aside from these tasks a train conductor may need to do anything needed to make sure things operate smoothly, such as throwing switches or cleaning ice and snow from them.

As the above attests, railroading is very hard work and is not exactly for everyone. You truly have to love this line work to make a career out of it, as spending 12 hours a day constantly away from home makes it very hard on family life.

I have talked to and read about those who, upon reflecting, wonder if they would do it all over again because of this (some lost their family altogether while others missed out on many family activities).

Somewhat ironically what was once a senior position, in today's industry the conductor is the entry-level field.  It may seem hard to comprehend but once upon a time train crewmen learned their particular skills on the job and railroads simply hired able-bodied men off the street with little to no prior railroad experience.

After passing a basic physical they were sent out on the road and hoped their coworkers taught them their job over time.

In the modern, structured era potential new employees spend hours in the classroom before even being allowed to climb into the cab.

In addition, depending upon which railroad you work for makes a difference in your day-to-day duties; if hired by a large Class I you can expect to, more or less, climb onto the train, take inventory of its makeup, and off you go.

However, on short lines trains usually need to be blocked by the crew itself, without assistance from a yardmaster.  A train conductor also acts as a liaison, talking with customers and addressing any needs they may have. 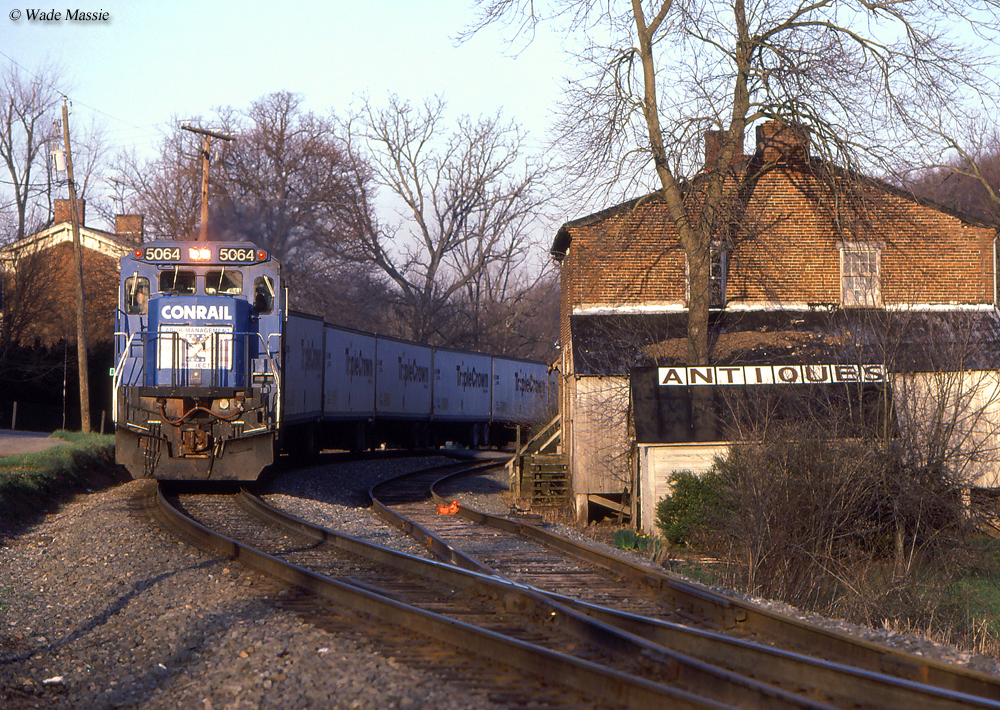 Again, railroading and family life can certainly be attained it just takes much sacrificing. The pay and retirement Class Is, in particular, offer is very tempting and can allow one to earn a very nice living.  It is not uncommon to earn over $100,000 annually after a number of years working for a Class 1.  So, there are great incentives to this line of work it just all depends on whether you believe it is for you.

One last thing to keep in mind, some railroaders wait many years, sometimes over 20, to land that "9 to 5" day when they know exactly when they will come in to work and head home.

Having said that, if you are able to hire on with a short line (Class III) or regional (Class II) railroad the opportunity for a more predictable schedule is very likely although the pay is not quite as good.

In any event, some Class Is (like CSX and Union Pacific) field their own training centers to teach you the trade of being a train conductor while others hire through accredited schools like the National Academy of Railroad Sciences and Modoc Railroad Academy. Many of these organizations are listed above.