Pennsylvania's regional Congressional was in some ways a truncated version of its Senator, a train operating all of the way to Boston.

The Northeast services were also known by other names and offered perhaps the preeminent way for commuters, business interests, and local travelers to make their way to and from the Northeast's largest cities. Today, of course, Amtrak hosts such trains.

Unfortunately, the carrier has been unable to live up to the PRR when passengers were treated as royalty and trains provided numerous on-board amenities and accommodations.

The Congressionals slowly declined into the 1960s, especially under the Penn Central.  They initially remained on the timetable in the Amtrak era but were retired a few years after the carrier began.

Before the days of state-sponsored commuter and regional passenger service, the freight railroads were required to provide such transportation for the general public.

For the PRR, the proud company offered the most extensive such service anywhere in the nation, linking New York, Philadelphia, Baltimore, and Washington with electrified rail service. 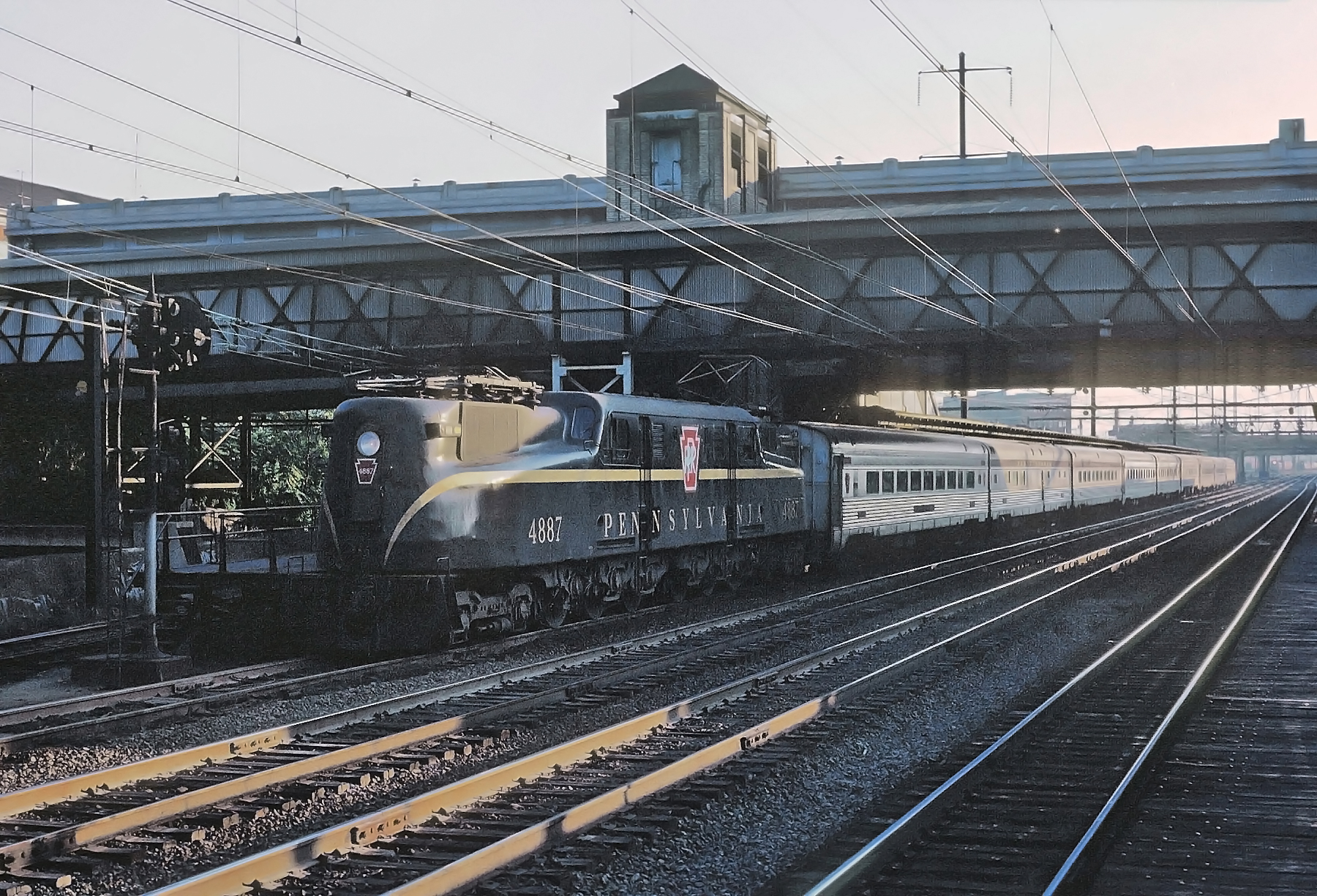 The origins of the Pennsy's regional service along the Northeast Corridor, between our nation's capital and New York City, dates back to the Congressional Limited Express, a train inaugurated in 1885.

From an early date the PRR learned the value of offering fast, local service for commuters, which was especially true in such a populated region as the Northeast.

During these early years power for the train was provided by steam and typical intermediate stops included Newark, New Brunswick, Trenton, Philadelphia, Wilmington, Perryville, and Baltimore (this changed little over the years).

The first real change for the Congressional Limited Express occurred during the 1920s when the Pennsylvania announced it would be upgrading the corridor to full electrified status and adding hourly stops along the route.

Still, while the 1930s saw the PRR complete its electrification project, the fast and reliable GG1 electrics were introduced, and streamliners hit the rails (in 1934) the railroad was reluctant to spend vast amounts of capital on the latter outside of its long distance runs like the Broadway Limited (appropriately dubbed as its "Fleet of Modernism").

Interestingly, even the much smaller Reading Railroad delved into the streamliner fad when in 1937 it introduced the Crusader between Philadelphia and Jersey City (in conjunction with the Central Railroad of New Jersey) serving the exact same market as the PRR.

It's safe to say the new equipment and upgraded services this train offered probably stole away a bit of the Pennsylvania's traffic base, at least for a short time.

After seeing the success of the streamliner during the 1940s the PRR finally decided to spend considerable money on purchasing new equipment for its Northeastern services.

In 1951 it placed an order with the Budd Company for 64 new cars, which gave the railroad two trainsets each for each train. In terms of the Congressional this meant there would be a Morning and Afternoon daily run.

The new cars were a stunning change from the old heavyweight equipment used for years and gleamed in their fluted stainless steel, Tuscan red pinstripe, and gold lettering.

While today's regional commuter trains offer little more in the way of amenities aside from a snackbar this was not the case with the Pennsy's service. 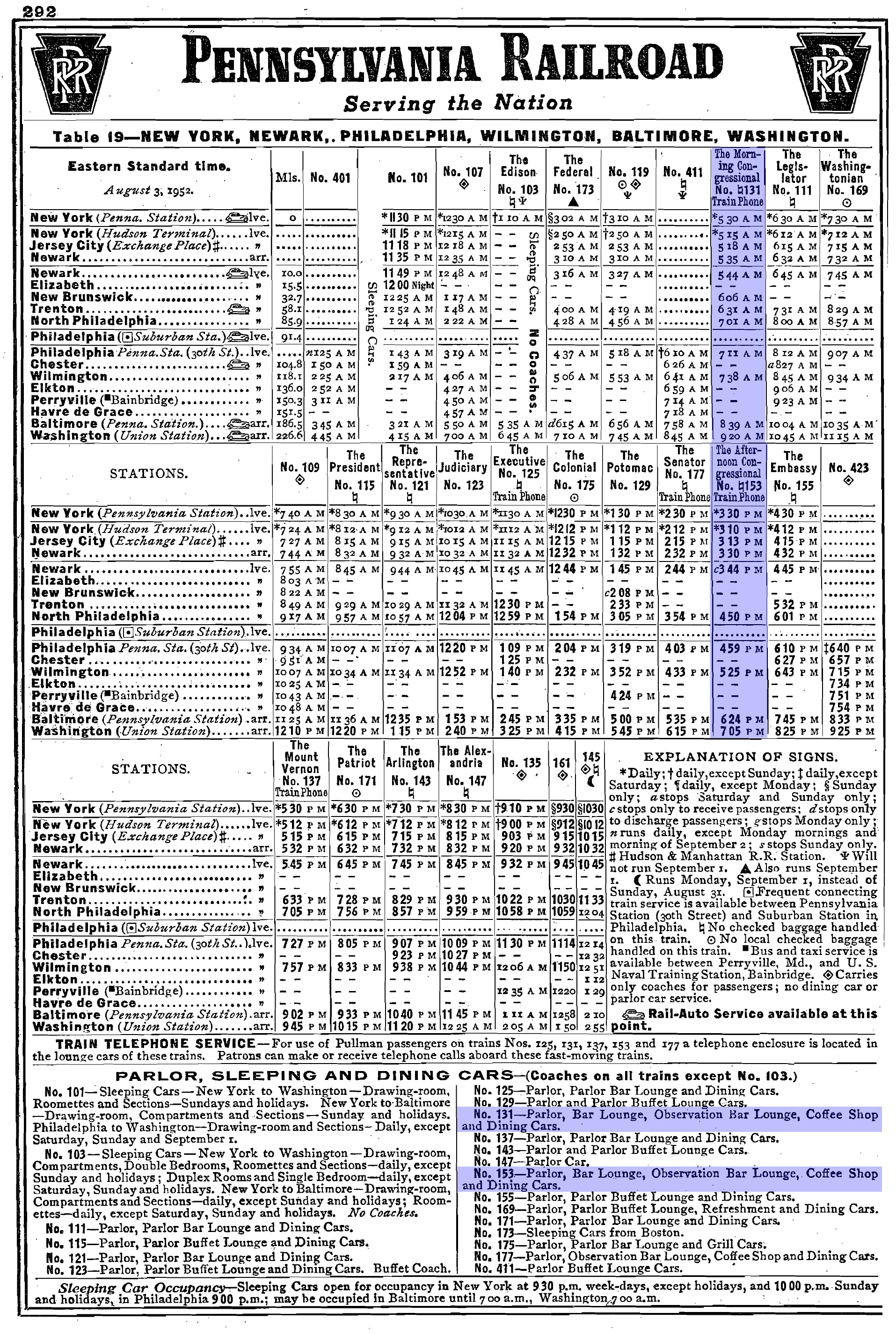 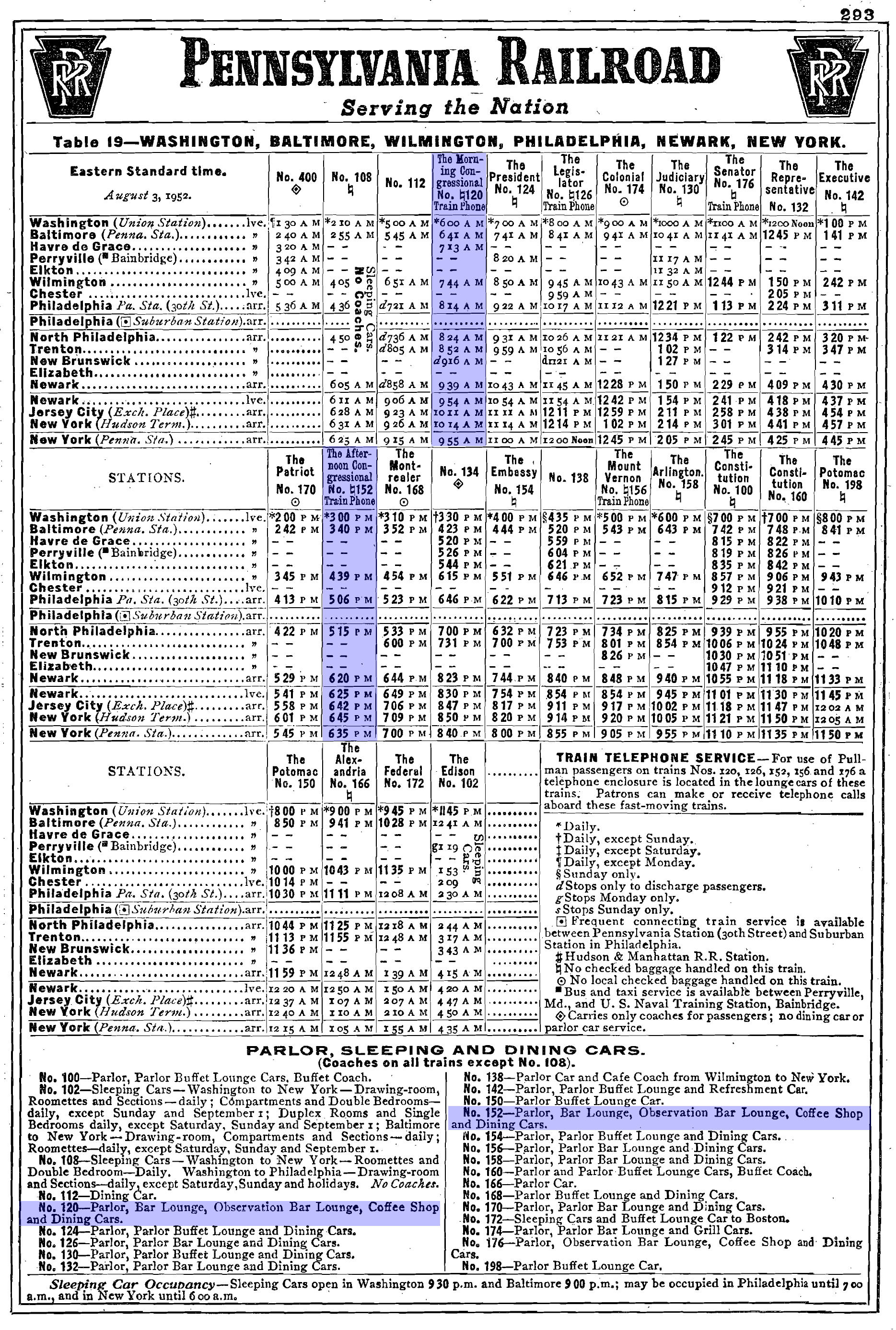 The trains' interior featured decors matching the region in which they served; tasteful colors of red, white, and blue. Just as with the Senator a typical consist for the Congressionals included a parlor car, bar lounge, coffee shop tavern, diner, and an observation-bar-lounge.

It was top-notch service with an incredible offering splendid dining services.  According to Mike Schafer and Joe Welsh in their book, "Streamliners: History of a Railroad Icon," some choices from the menu included charbroiled steak and the Pennsy's legendary raisin pie.

This, of course, did not include light snacks and beverages that were generally always available. Additionally, the PRR took great effort in tailoring the train to business travelers by offering comfortable seating and a seven-room conference car for meetings.

Overall, no other railroad could match the Pennsylvania for regional service in the Northeast.

The Morning and Afternoon Congressional remained a regular service throughout the 1950s and 1960s despite a loss of ridership as regional airlines and new interstates drove patronage away.

Service continued to decline through the Penn Central era after 1968, particularly as the company eroded away into the 1970s.

With the start-up of Amtrak on May 1, 1971 the Congressionals initially remained on the timetable.  However, the train was discontinued by December of that year.