The Western Maryland's famed Connellsville Extension was the dream of owner George Gould in forming a true, transcontinental railroad through the ownership of several small to medium-sized systems.

The extension ran from Cumberland, Maryland to Connellsville, Pennsylvania where it connected the WM with another Gould subsidiary, the Pittsburgh & West Virginia.  The nearly 100 mile-long route was built to incredibly high standards and featured impressive engineering feats.

However, its high cost eventually forced the WM into bankruptcy and Gould later lost control of the railroad.  Despite this the Extension remained an important artery for decades following and offered spectacular views of the rolling countryside.

After the formation of Chessie System in 1972 the route's importance waned.  The Western Maryland was highly dependent on bridge traffic and the Connellsville Extension acted as a link in this chain.

Unfortunately, following the Chessie System union, the three railroads (Chesapeake & Ohio, Baltimore & Ohio, and WM) began an integration process.  As a result, the extension was no longer needed since the B&O maintained a parallel route which ran on to Pittsburgh, and ultimately Chicago. 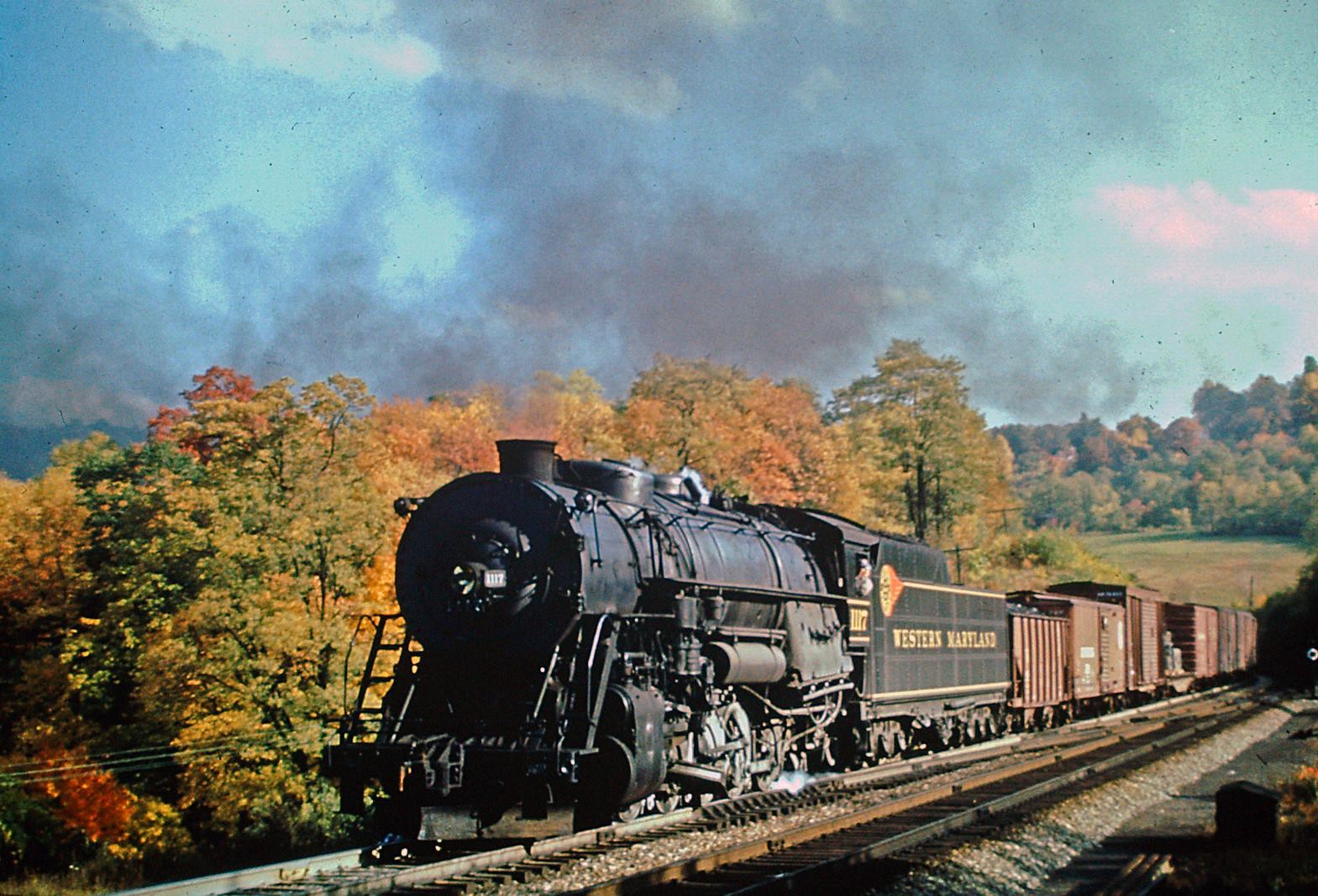 In May, 1975 the final through trains were dispatched and the line was subsequently abandoned (despite being a better engineered route over Pennsylvania's Sand Patch Grade).

By the turn of the 20th century the small system had only reached as far west as Hagerstown when it was acquired in 1902 by George Gould's Fuller Syndicate who was the son of the legendary rail baron, or perhaps notorious depending on one's point of view, Jay Gould.

The WM would be Gould's gateway to the east coast but it needed to expand westward to connect to his other interests the closest of which was the small Pittsburgh & West Virginia Railway.

By that time Gould already controlled or was allied with numerous other lines including the Missouri Pacific/Texas Pacific/International-Great Northern, Wabash, Western Pacific, and was attempting to acquire what would become the Denver & Rio Grande Western as well as the Pittsburgh & Lake Erie. 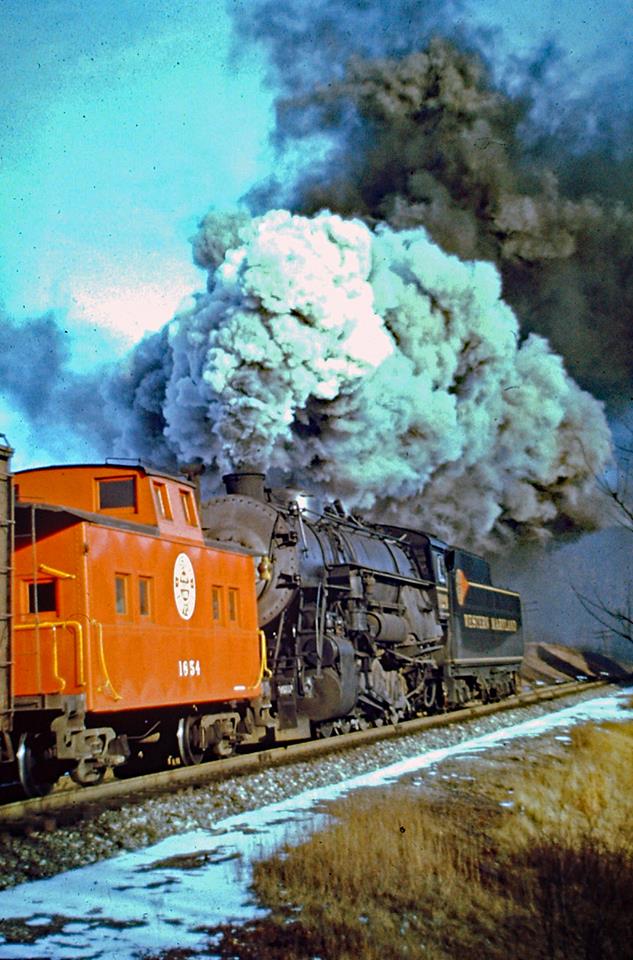 Western Maryland 2-10-0 #1123 (I-2) works helper service as it shoves from the rear of a freight train near Deal, Pennsylvania along the now-abandoned Connellsville Extension in November, 1952. Bill Price photo.

Immediately upon taking control of the WM he began pushing the road westward and by 1906 had reached Cumberland.  A year earlier the road had purchased the West Virginia Central & Pittsburgh Railway, which gave it access deep into the Mountain State reaching as far south as Elkins and opening up the region's rich coal deposits.

This initial rapid growth, however, was too much for the company's financial state to bear and it fell into receivership in 1908 from which it emerged in 1910 as the Western Maryland Railway.

This setback did not stop Gould, however, from continuing to expand the road and in 1910 announced his intentions to build what became known as the Connellsville Extension, 88.4 miles of new railroad that would reach Connellsville, Pennsylvania and eventually connect with subsidiary P&WV. 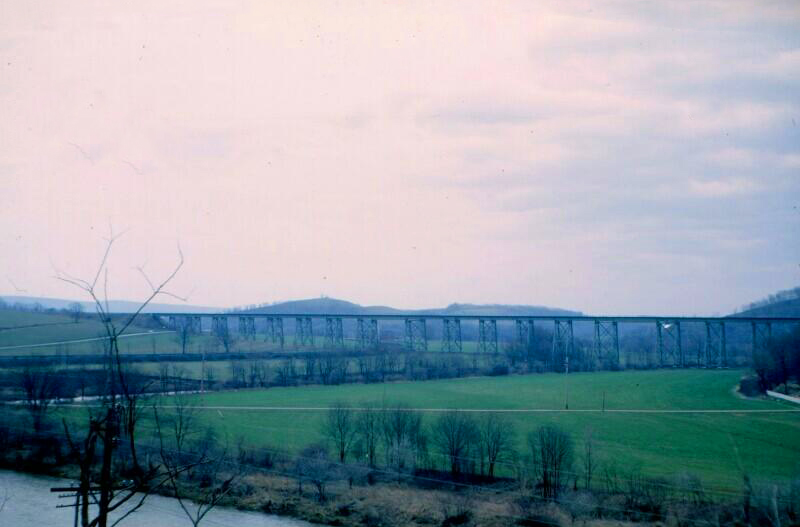 The most impressive feature of the Connellsville Extension was Salisbury Viaduct, which crossed the Baltimore & Ohio's Chicago main line on Sand Patch grade near Meyersdale, Pennsylvania. The bridge is seen here in 1965.

During construction of the new line Gould spared no expense, building it to very high standards that utilized high fills, deep cuts, long trestles, a few tunnels, and keeping curves to a minimum.

There was the Keystone Viaduct, a 910-foot bridge (listed as B195.5 by the WM and named for the tiny, nearby hamlet of Keystone) that crossed Flaugherty Creek and the Baltimore & Ohio's famed Sand Patch grade, which was part of its main line between Baltimore and Chicago.

Then there was the even more impressive Salisbury Viaduct, a towering structure that spanned the Casselman River Valley and the B&O line outside of Meyersdale along the Mason-Dixon Line. 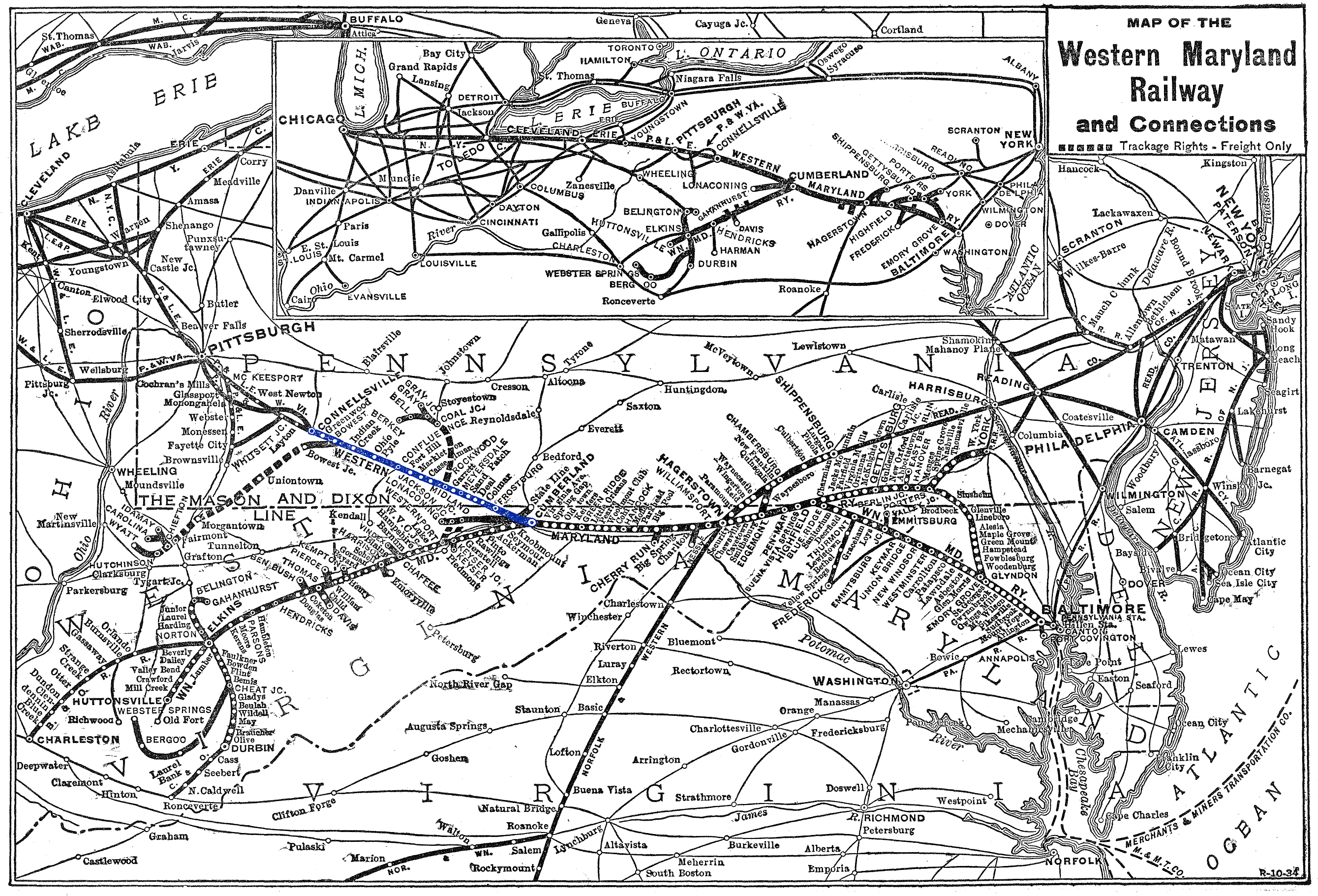 A map of the Connellsville Extension (highlighted in blue) from Western Maryland's 1934 system map. Author's collection.

This bridge was listed by the WM as B199.4 and was an impressive 1,908-feet in length, easily making it the longest such structure on the railroad.  In both cases the viaducts were built to handle double-tracking, which never came to pass.

The four notable bores along the route included:

Looking back on the history of the "Wild Mary" it is interesting to wonder what would have become of the road and how large it would have grown had Gould not lost control of the property, and all of his railroad assets, after 1918. 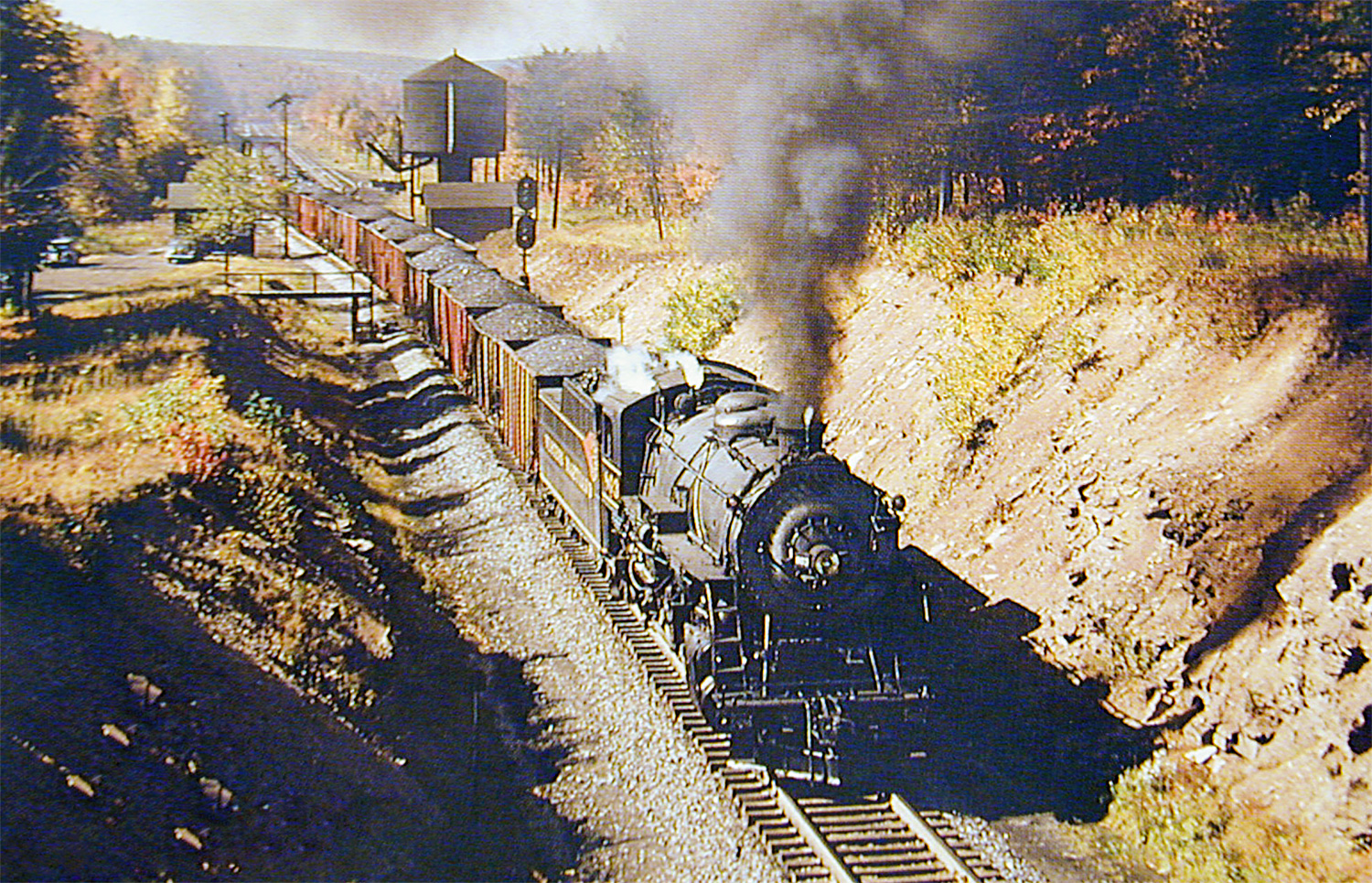 One of Western Maryland's trusty H Class 2-8-0's has a short coal train on the Connellsville Extension near Deal, Pennsylvania in the 1950s. Bill Price photo.

The Western Maryland grew little after opening its incredibly expensive $12 million Connellsville Extension in 1912.  However, the route did become an important artery in the movement of timed freights, coal, and other traffic over the years.

In 1931 the P&WV finally completed its own line to Connellsville more than a decade after Gould's dream had died.  With this new outlet in place the WM, P&WV, Nickel Plate Road, Wheeling & Lake Erie, Reading, Jersey Central, Lehigh & Hudson River, and the New Haven Railroad all worked together to form the "Alphabet Route" on February 11, 1931.

This type of eastern "Inside Gateway" was meant to give shippers another alternative for shipping hotshot freights between the Midwest and east coast without having to use one of the major trunk lines like the B&O, Pennsylvania, or New York Central. 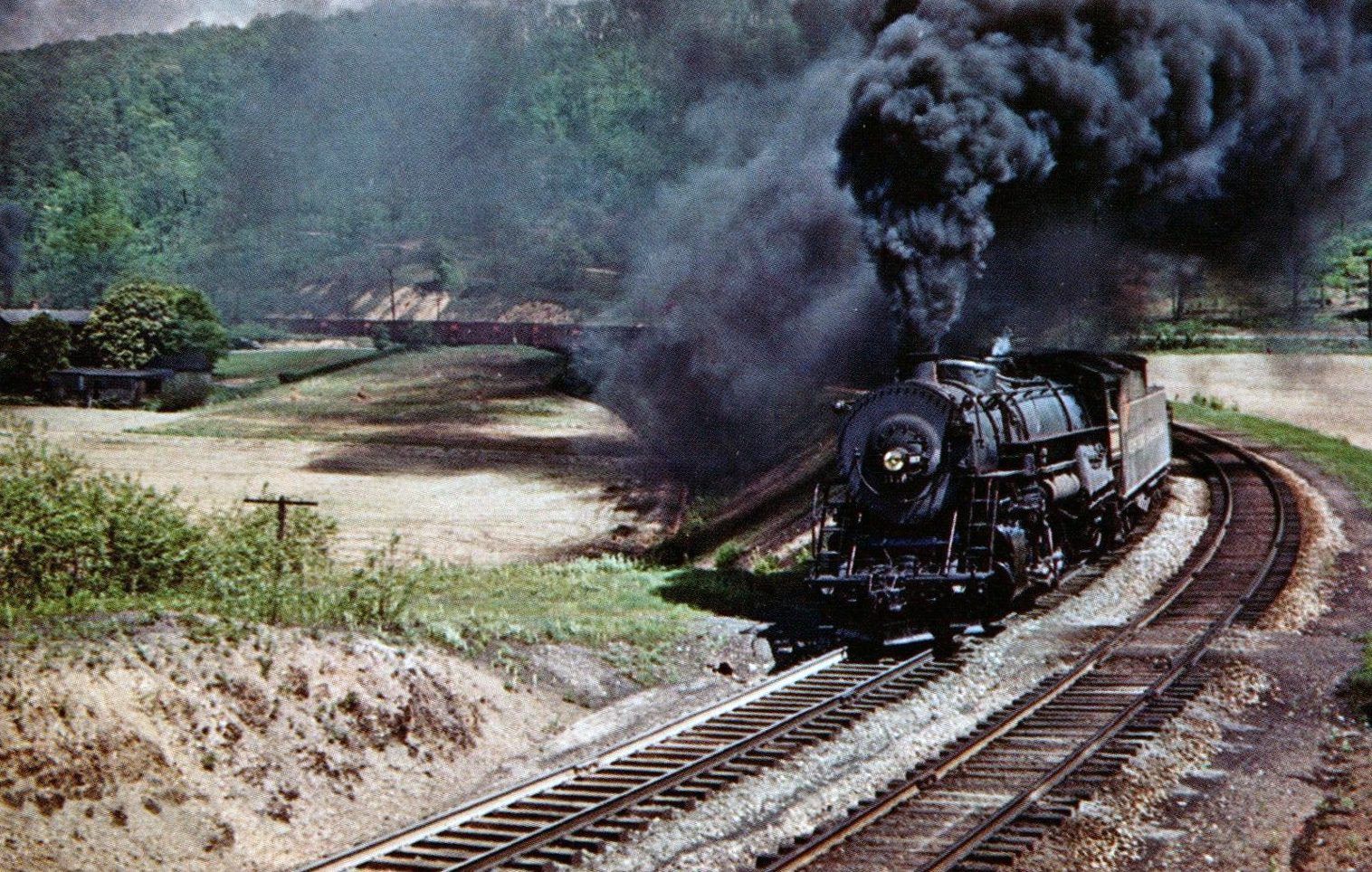 One of the Western Maryland's powerful 2-10-0's, #1119 (I-2), rolls through the famous Helmstetter's Curve near Corriganville, Maryland on May 15, 1952. These Decapod's were used all over the WM's system in a variety of main line assignments. Bob Collins photo.

With expedited freights given names like AJ-12, WAJ-1, and PAJ-1 the marketing tactic worked for many years.  Finally, as mergers reduced the number of companies participating in the program and the Penn Central collapse of the 1970's, the Alphabet Route slowly ended in an unceremonious fashion during the early 1980s.

The Extension, however, was gone before this time.  After the formation of the Chessie System in 1972 between the Chesapeake & Ohio, B&O, and WM the new holding company elected to, interestingly, use the older and somewhat steeper Sand Patch line of the B&O, in turn abandoning not only the Extension in 1975 but also much of the "Wild Mary" system in the years to follow.

Today, the remnants of the route are now part of recreational corridors like the Allegheny Highlands Trail.