The Copper Country Limited was one of many secondary trains operating on the Milwaukee Road.  It certainly carried an appropriate name with service provided from Chicago to the northern fringes of Michigan's Upper Peninsula (copper country) in conjunction with the Duluth, South Shore & Atlantic (later a Soo Line subsidiary).

Considering the rurality of this part of the country it is quite amazing a railroad provided such high class services; but the Milwaukee was not alone, such trains could be found running to similar out-of-the-way areas all across the country well into the 1960's.

The Copper Country Limited was inaugurated in the early 20th century and as the years passed lost any recognition it once carried, especially after a new Hiawatha service to the region bumped it further down the ladder.

However, thanks in part to U.S. mail contracts it remained on the timetable nearly until the start of Amtrak before finally being discontinued during the late 1960s.  According to Jim Scribbins' book, "Milwaukee Road Remembered," there doesn't seem to have been a definitive point in which the Copper Country Limited joined the timetable. 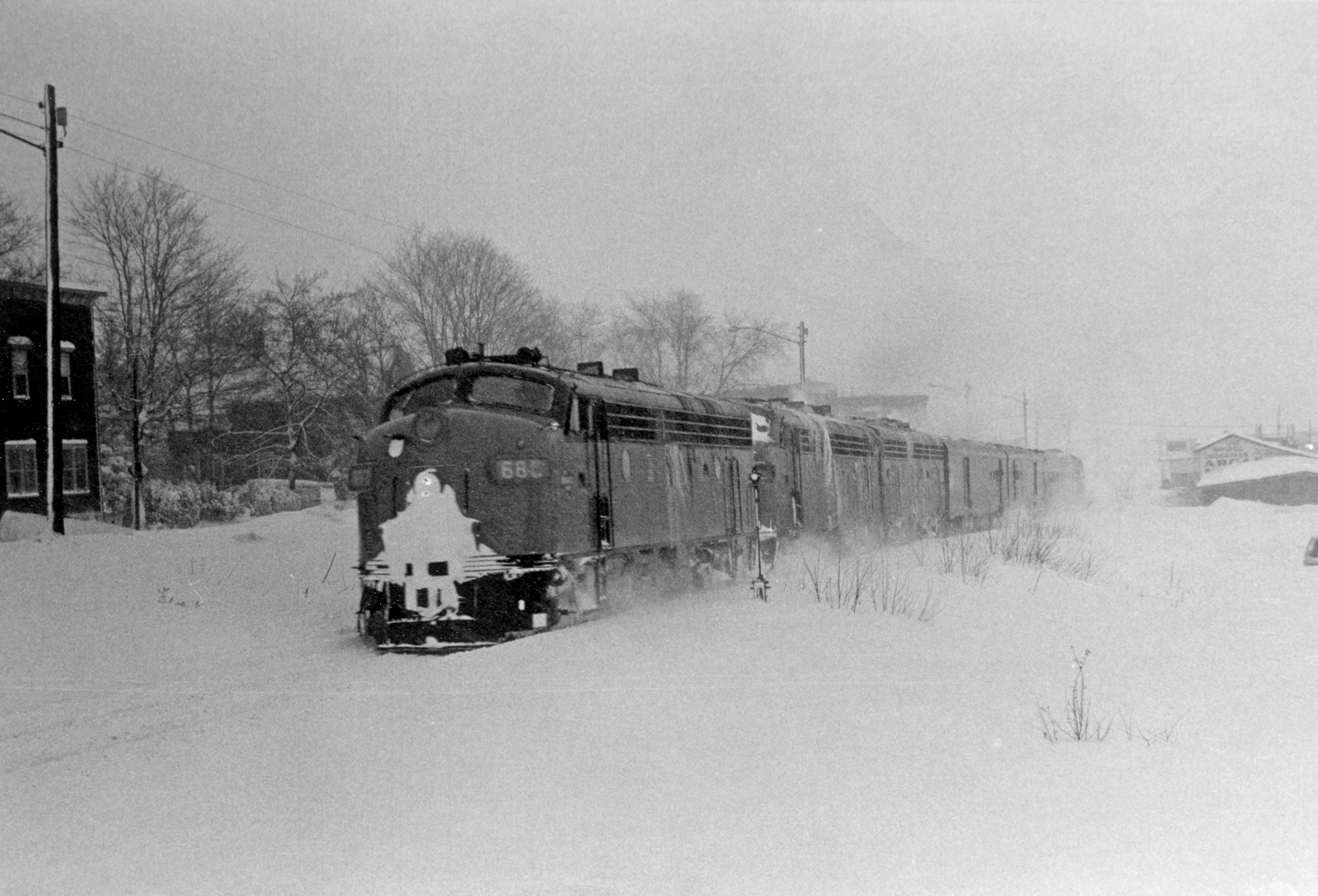 A Brief History Of The Copper Country Limited

Its first appearance was during March of 1907 listed as trains #2 (southbound) and #3 (northbound).  The route it plied required a little more than 12 hours departing Chicago late in the evening, running through Green Bay, and arriving at Calumet, Michigan the following morning. 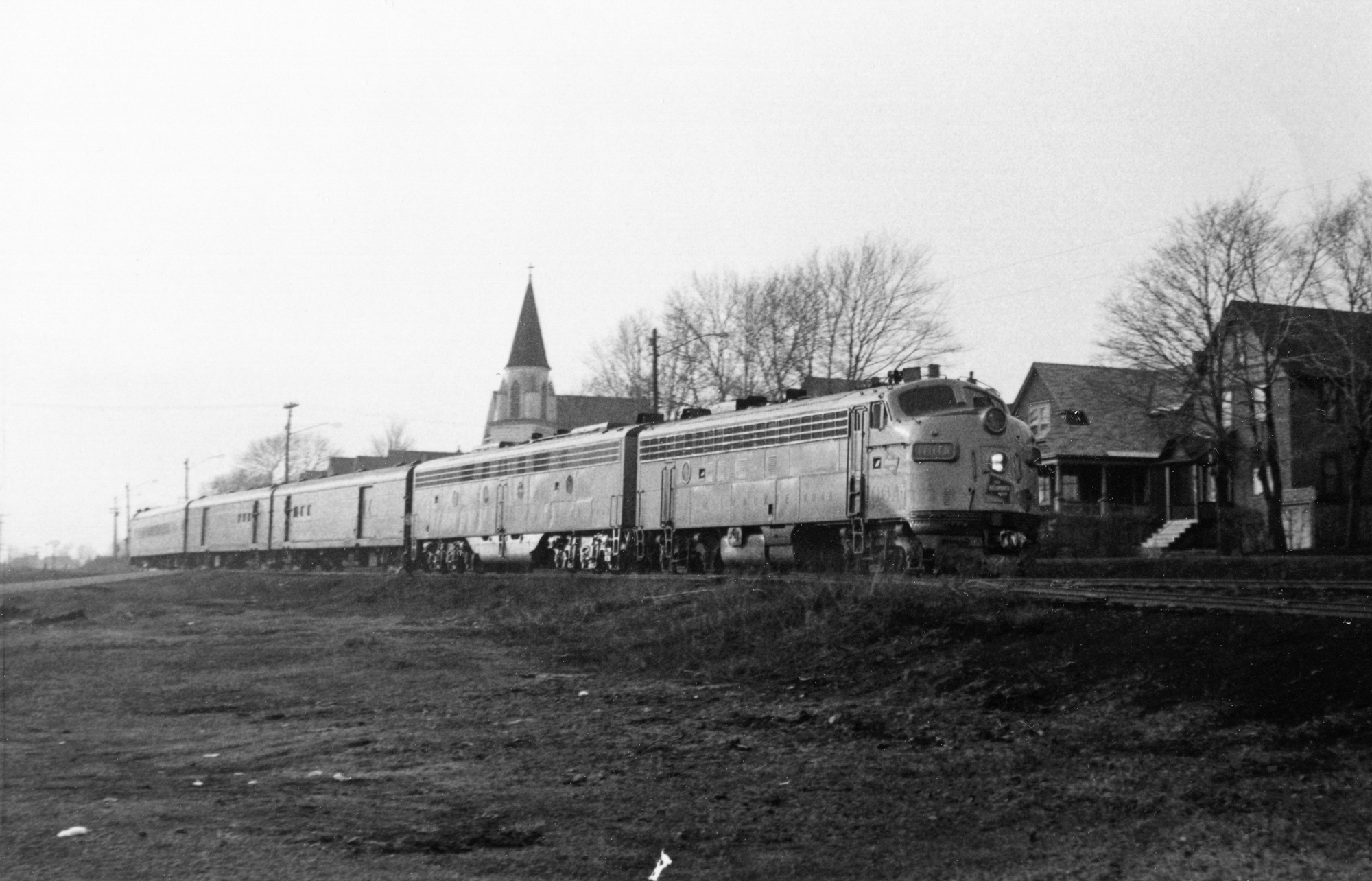 Milwaukee Road FP7 #100-A rolls through Hancock, Michigan with the "Copper Country Limited" during the winter of 1967. Jim Alain photo. Bob Gilreath collection.

Interchange with the DSS&A was carried out at Champion, Michigan, (a Milwaukee-Marquette sleeper was interchanged 10 miles south at Republic, Michigan) which operated the train to its northward destination near the shores of Lake Superior.

During its early years the Copper Country provided a consist including coaches, sleepers running through between Milwaukee and Marquette (Michigan) as well as Chicago and Calumet.

At this time it seems the then-Chicago, Milwaukee & St. Paul considered the train as one of its more notable runs but as the years passed its status apparently faded especially with the arrival of the Hiawathas. 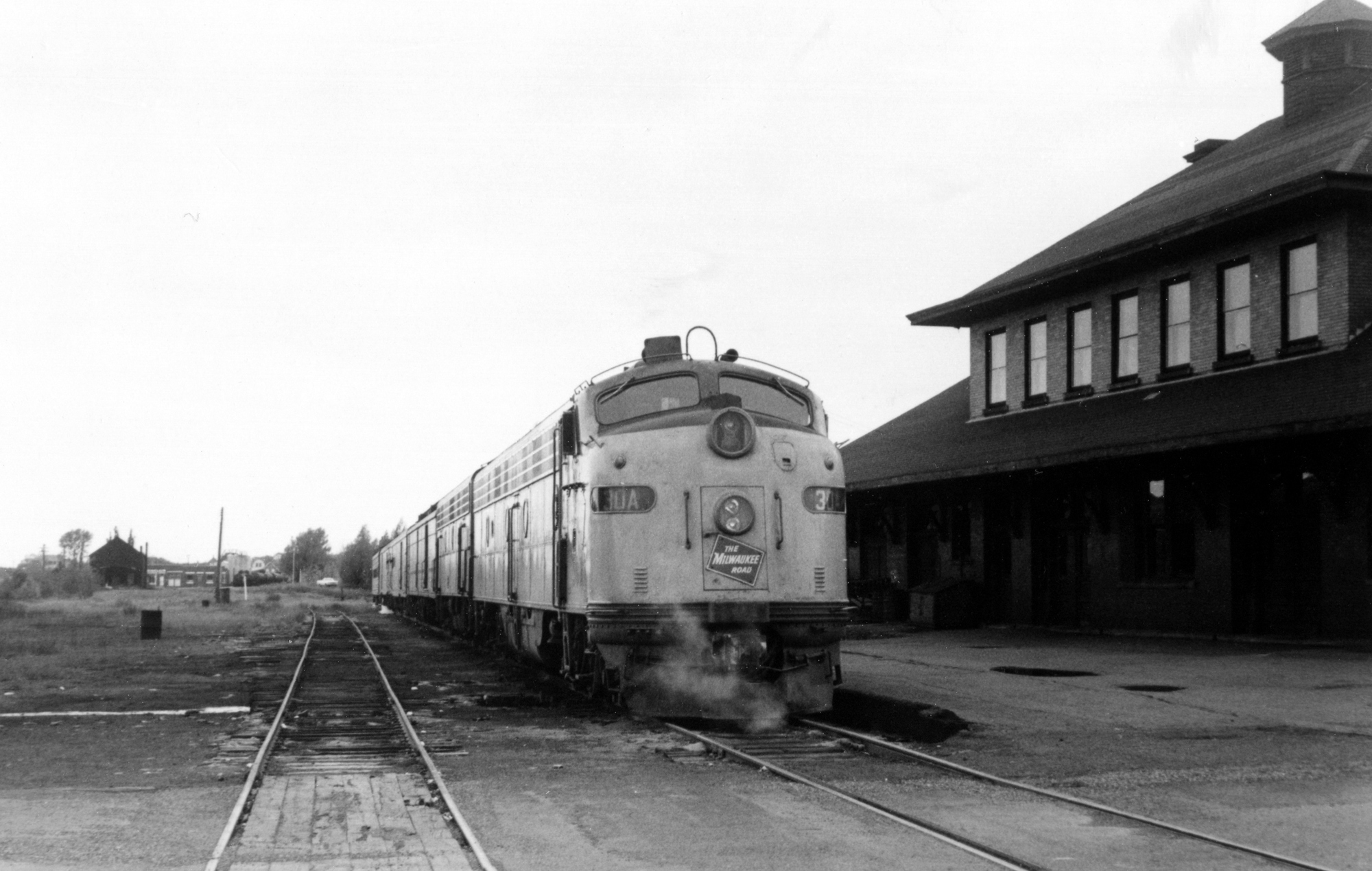 Milwaukee Road E9A #30-A is ahead of the "Copper Country Limited" at the depot in Calumet, Michigan during the 1960s. Jim Alain photo. Bob Gilreath collection.

During the latter half of 1930 a number of changes came to the Copper Country including: 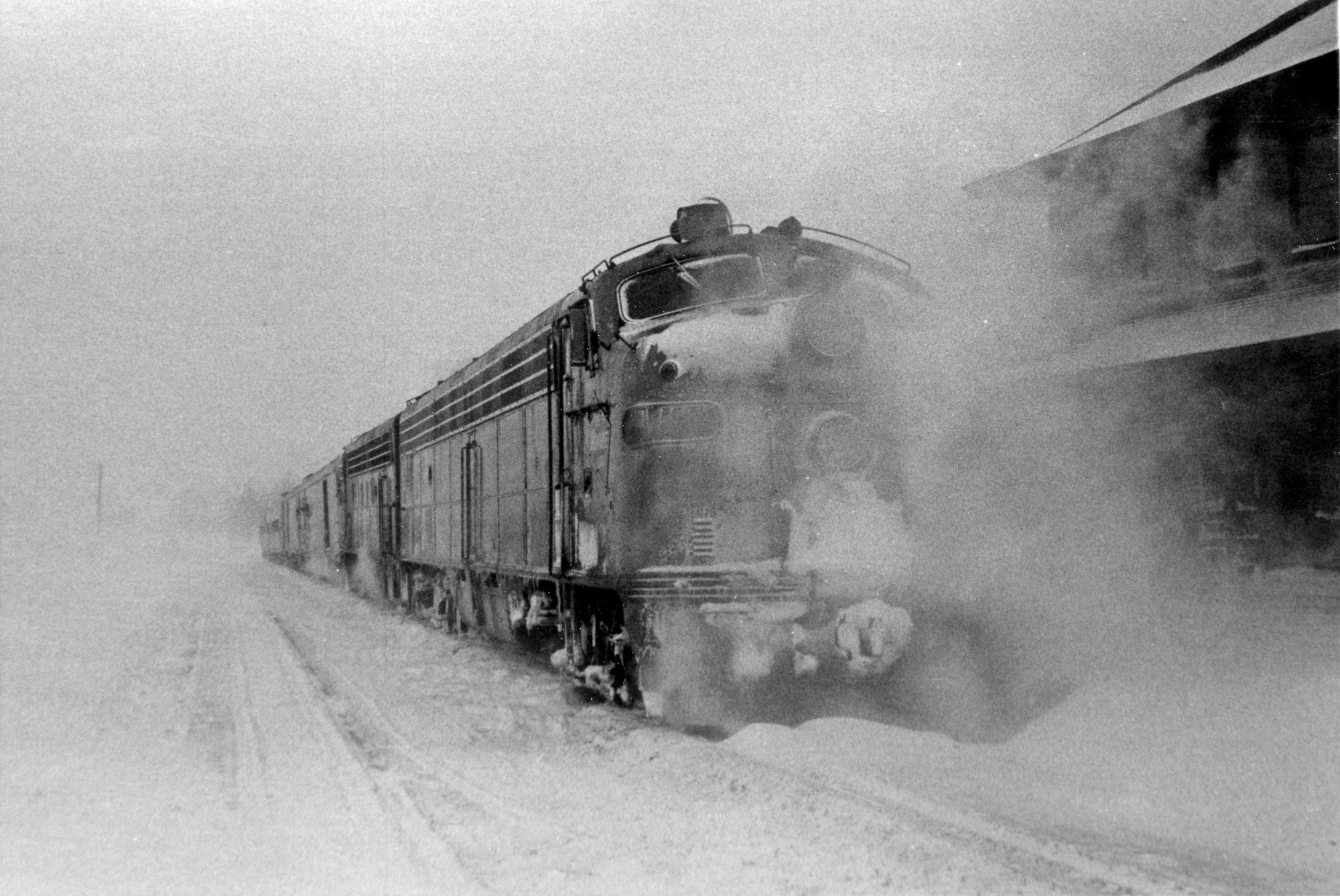 On a bitterly cold and snowy day an E9A boards the "Copper Country Limited" in Calumet, Michigan during February of 1967. Jim Alain photo. Bob Gilreath collection.

As Mr. Scribbins notes in his book the depression years were hard on railroads and the southbound Copper Country stopped running through to Chicago with the Pioneer Limited picking up its cars in Milwaukee.  This operation continued on and off through the diesel era.

The Milwaukee Road was quick to adopt this form of motive power, purchasing its first diesels for passenger assignments when it acquired a pair of E6As from Electro-Motive (#15A-15B) and Alco DL-109s (#14A-14B) in 1941.  However, World War II temporarily halted the purchase of more, a process which continued in 1946 after the conflict was over.

With the arrival of the Chippewa-Hiawatha on the Milwaukee Division during May of 1938 the Copper Country Limited took a further back seat on this corridor.  The new train ran a very fast schedule, provided top-level accommodations, and was completely streamlined, which included its pair of shrouded Class F-3a 4-6-2s. 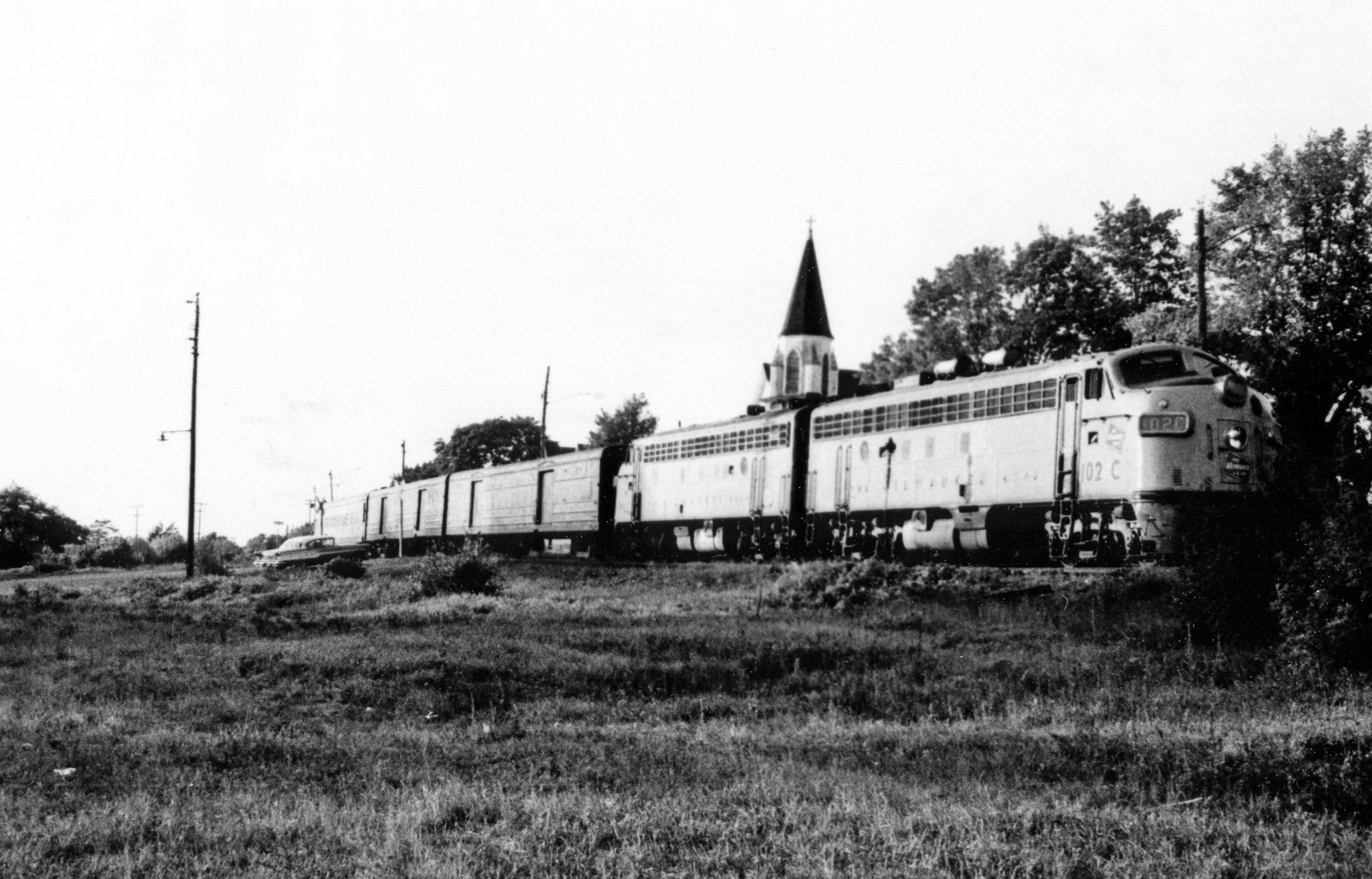 Another view of the "Copper Country Limited" at Hancock, Michigan led by FP7's in the summer of 1966. Jim Alain photo. Bob Gilreath collection.

For many years Pacifics had been primary power for the Copper Country albeit non-streamlined.  As diesels began arriving in ever larger numbers after the war steam had been entirely replaced across the railroad by the mid-1950s.

Intercity services like the Hiawathas, and other trains through the Midwest, were led by Electro-Motive models such as E7As, E9As/Bs, and FP7s (acquired through 1961) while the company also used Fairbanks Morse Erie-Builts (bumped from more prestigious assignments leading the Olympian Hiawatha) and a few Alco RSC2s equipped with steam generators for passenger service. 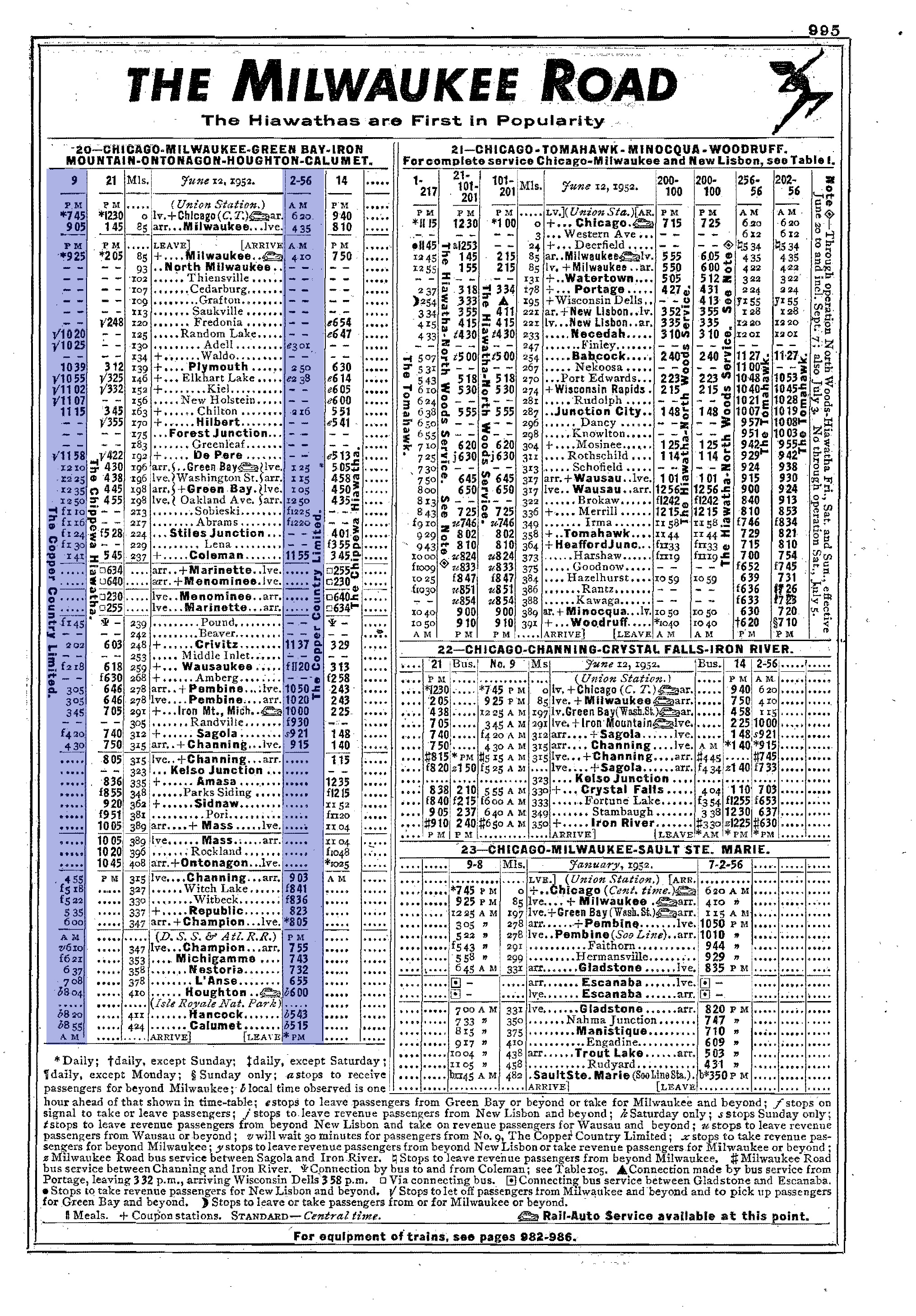 The Copper Country Limited was diesel powered in 1952 and it was quite common to see FP7s, E7As, or E9s leading the train.  When the Milwaukee took over assignments carrying Union Pacific's City fleet into Chicago starting on October 30, 1955 a major shakeup in train numbers occurred. 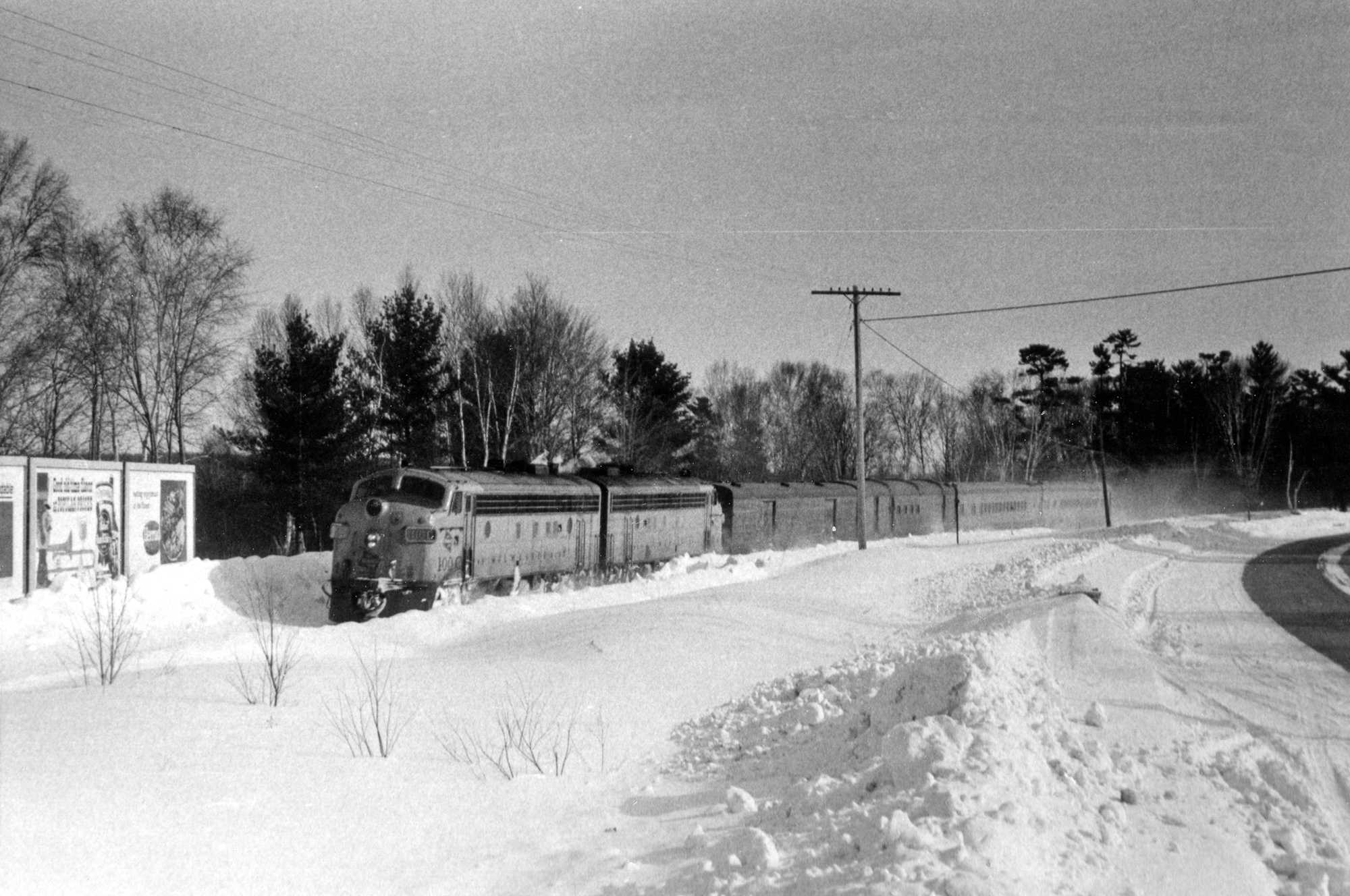 A pair of FP7s led by #100C have the "Copper Country Limited" at-speed near Houghton, Michigan during the winter of 1967. Jim Alain photo. Bob Gilreath collection.

The Copper Country's southbound #2 was changed to #10 in correspondence with #9; by then its  consist was only a few sleepers and coaches.

During 1958 the through Sault Ste. Marie sleeper was discontinued entirely after several cutbacks leaving only the sleeper to Calumet (operated by Pullman) as the remaining such service available (a 6-roomette/8-duplex roomette/4-double bedroom car). 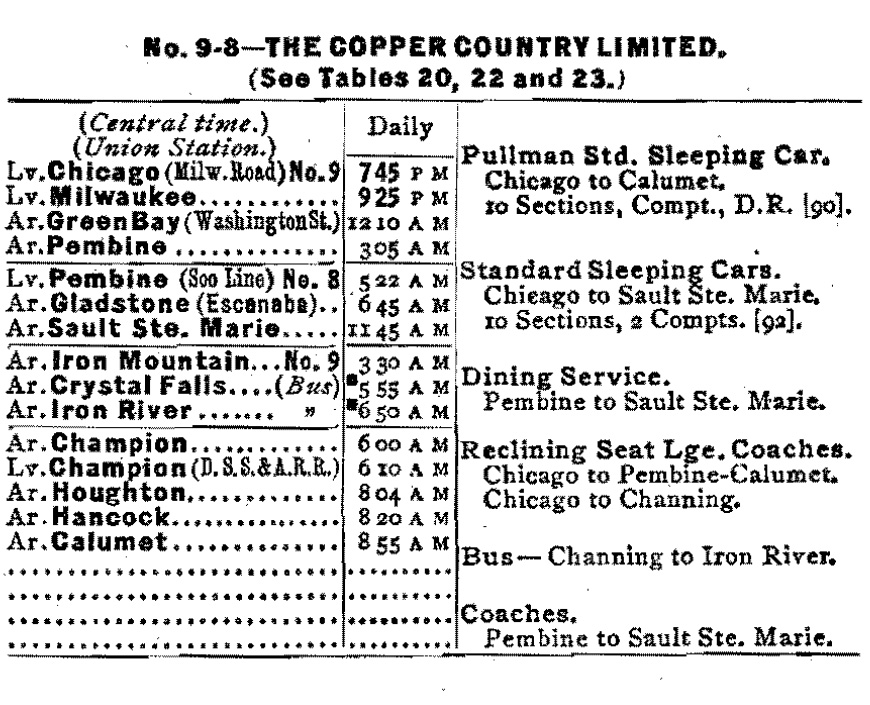 As ridership continued to slide the Milwaukee offered the sleeper only three days a week beginning in the spring of 1964 and remained on this scheduled until the Copper Country was discontinued a few years later.

While the railroad is fondly remembered for sustaining its regional Hiawathas with first-class services until the end its secondary trains were not provided such luxuries. 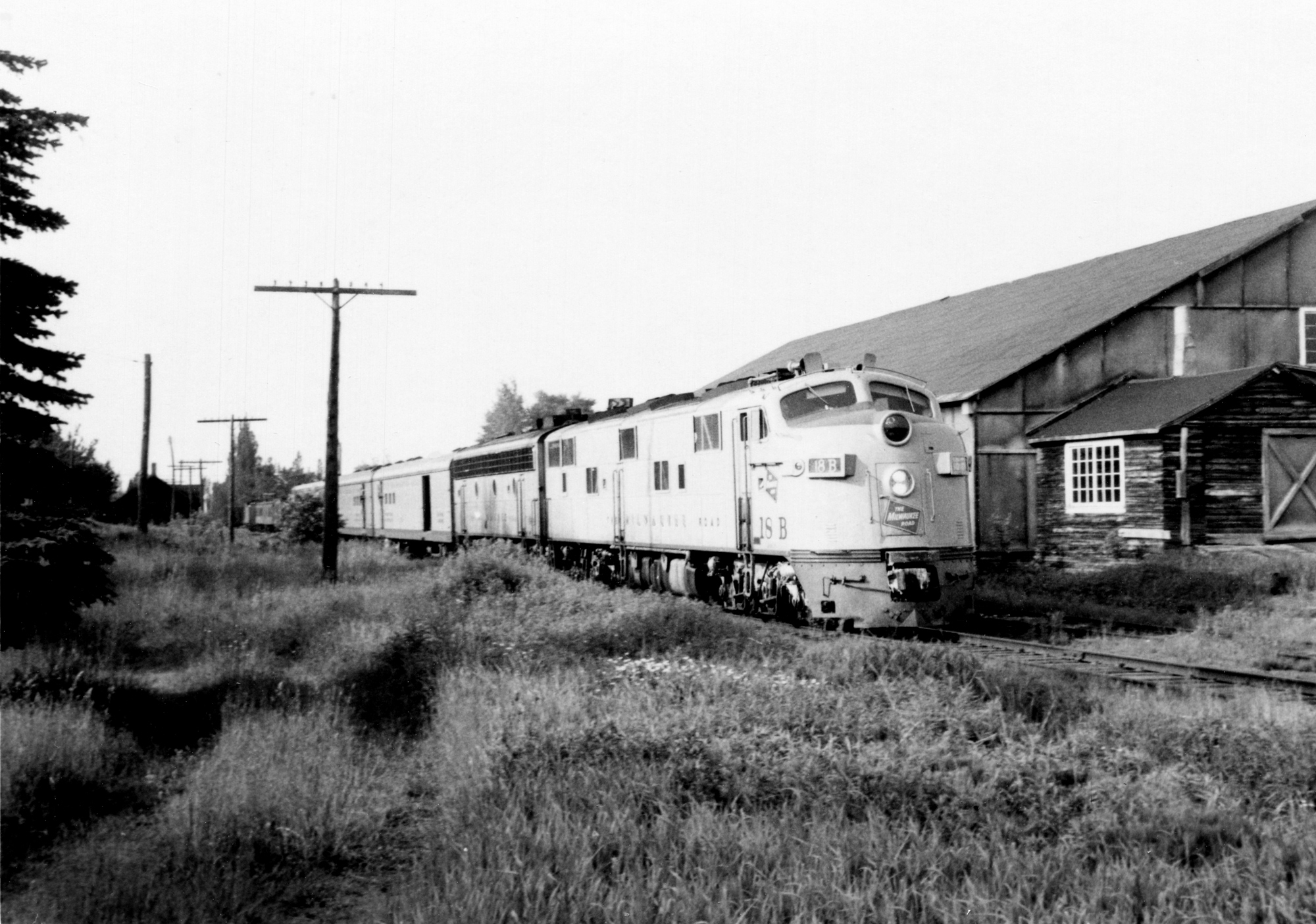 For instance, during its final years the Copper Country offered little more than a few cars and its existence persisted almost entirely due to the lucrative U.S. mail contracts that kept many similar trains running all across the country that would have otherwise been retired years before.

The hammer fell for most, including the Copper Country, when these contracts were canceled during 1967 (it officially lost its Railway Post Office car in October of that year).

With little other reason to keep it and few riders remaining the train made its last runs on March 7 and 8, 1968.  Interestingly, the Copper Country survived nearly a decade longer than the once-heralded Chippewa-Hiawatha which had been discontinued on February 6, 1960.