It was owned and operated by the Copper Range Company to serve several mines in the region with a connection to the Chicago, Milwaukee, St. Paul & Pacific (the Milwaukee Road) at McKeever as well as the Soo farther north.

At its peak the system was nearly 75 miles in length with several spurs branching from its main line between McKeever to as far north as Gay.

The earliest history of railroads serving the region dated to the 1870s via a narrow-gauge line although the Copper Range itself was not officially created for another 15 years following.

After World War II the system slowly declined and cutback as mines played out and closed.

By the early 1970s virtually all major traffic had disappeared and the railroad was officially abandoned with tracks scrapped soon afterward. Today, sections of the original line are now a rail/trail. 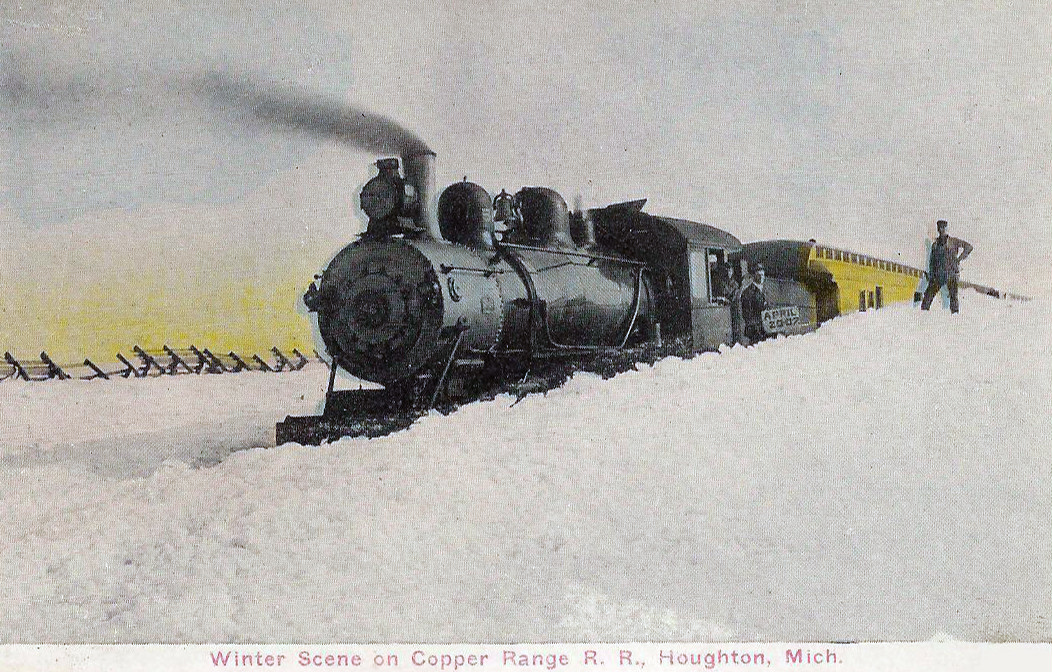 A Copper Range Railroad passenger train buried in the snow near Houghton, Michigan circa 1907.

The history of the Copper Range Railroad was chartered in March of 1899 to serve its parent's extensive mining network around the Portage Lake region of the Keweenaw Peninsula.

Since 1873 a line had already been operating between Hancock and Calumet, the narrow-gauge, 14-mile long Mineral Range Railroad. Construction of the new route began that spring of 1899 and by December it was opened between Houghton and Winona, 28.9 miles.

The railroad also by then had established its primary yard and offices in Houghton, which also included a roundhouse and all major maintenance facilities.

This town sat at about the half-way point once the system was completed and also connected with the Mineral Range, a setup that lasted for many years as it later became part of the Duluth, South Shore & Atlantic Railway (DSS&A) which itself was purchased by the Soo Line.

By around 1913 the Copper Range had been completed in terms of both its 74.1-mile main line between McKeever and Gay as well as its many branches.

In all, the railroad had about six branches of some size that included;

These secondary routes connected to a wide array of copper mines.

However, the Copper Range also served coal mines around South Range, lumber mills (notable was the Boniface-Gorman Lumber Company at the northern end of the system in Gay), stamp mills, and the Michigan Smelting Company near Houghton.

It's somewhat amazing the amount of mines the railroad served given that the peninsula is only 70+ miles in length. 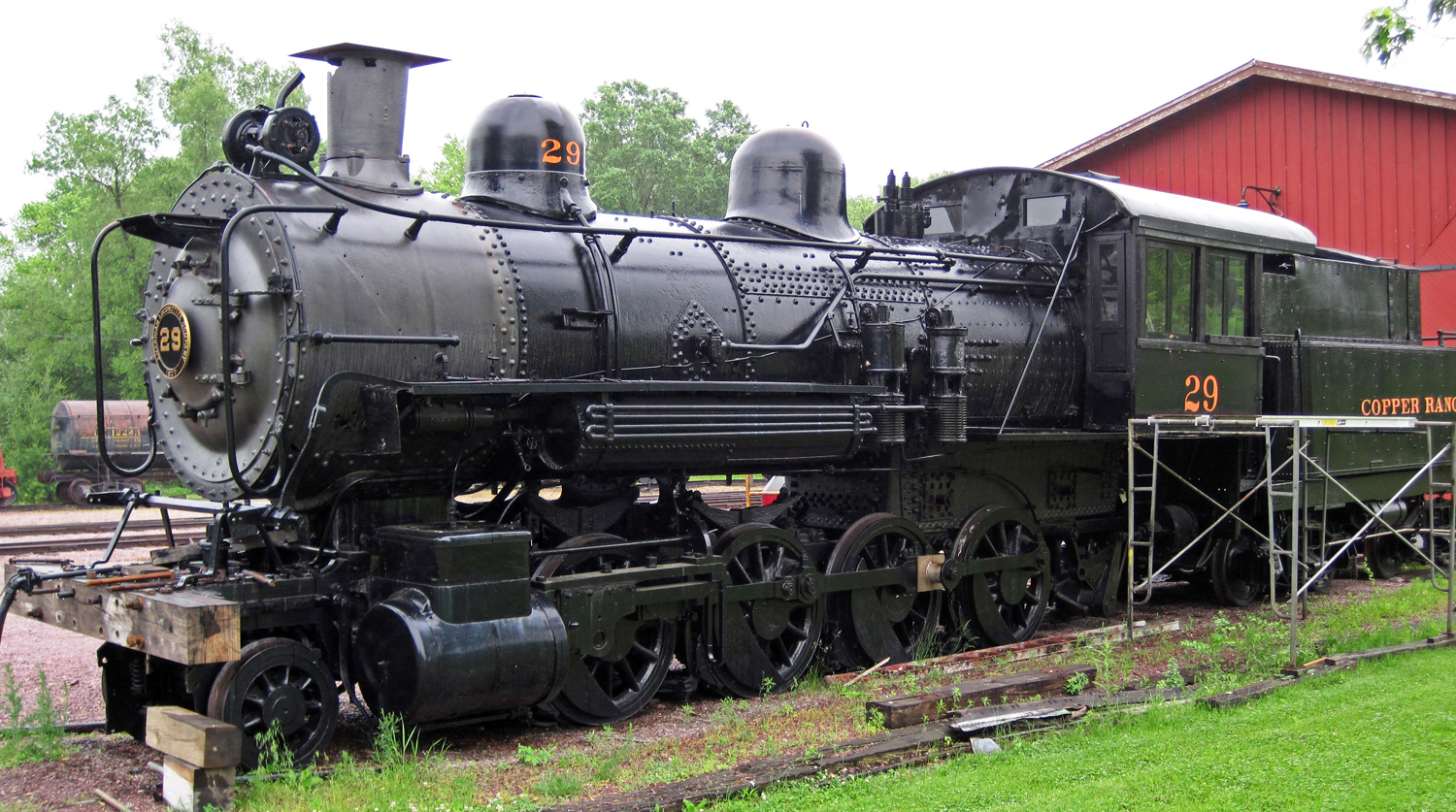 Typical power for the Copper Range Railroad during the steam era including the 2-8-0 Consolidation, its workhorse.

Most of these locomotives were built by the American Locomotive Company's Schenectady, New York facility that ranged in size from 96 to 100 tons; other wheel arrangements the company owned included 2-6-0 Moguls, 4-6-0 Ten Wheelers, and 4-4-0 Americans.

After 1910 the Copper Range reached trackage rights agreements with the Milwaukee Road to extend its passenger services east to Channing and west to Ontonagon along the banks of Lake Superior.

In general, the railroad did not invest heavily in passenger operations due to the lightly populated area although it did offer daily service for many years, especially early on (at one time it even hosted an observation car on its trains).

Later, as demand decline the only way to catch a train was via a mixed freight. This practice was finally cancelled after 1950.

As early as the summer of 1927 mines along the Copper Range Railroad began to close, the first of which was the Seneca Mine.

The company's only bankruptcy followed on March 26, 1935 due to the ongoing depression although it was able to exit receivership a few years later on July 1, 1938.

Interestingly, Copper Range management insisted that the new locomotives be "painted in a scheme identical to that illustrated in the Baldwin's catalog."

Thus, they sported a red on the hood which trailed away into a light grey with yellow trim here and there. A few years later during July of 1951 the company picked up one more, a Baldwin S-12, #200. 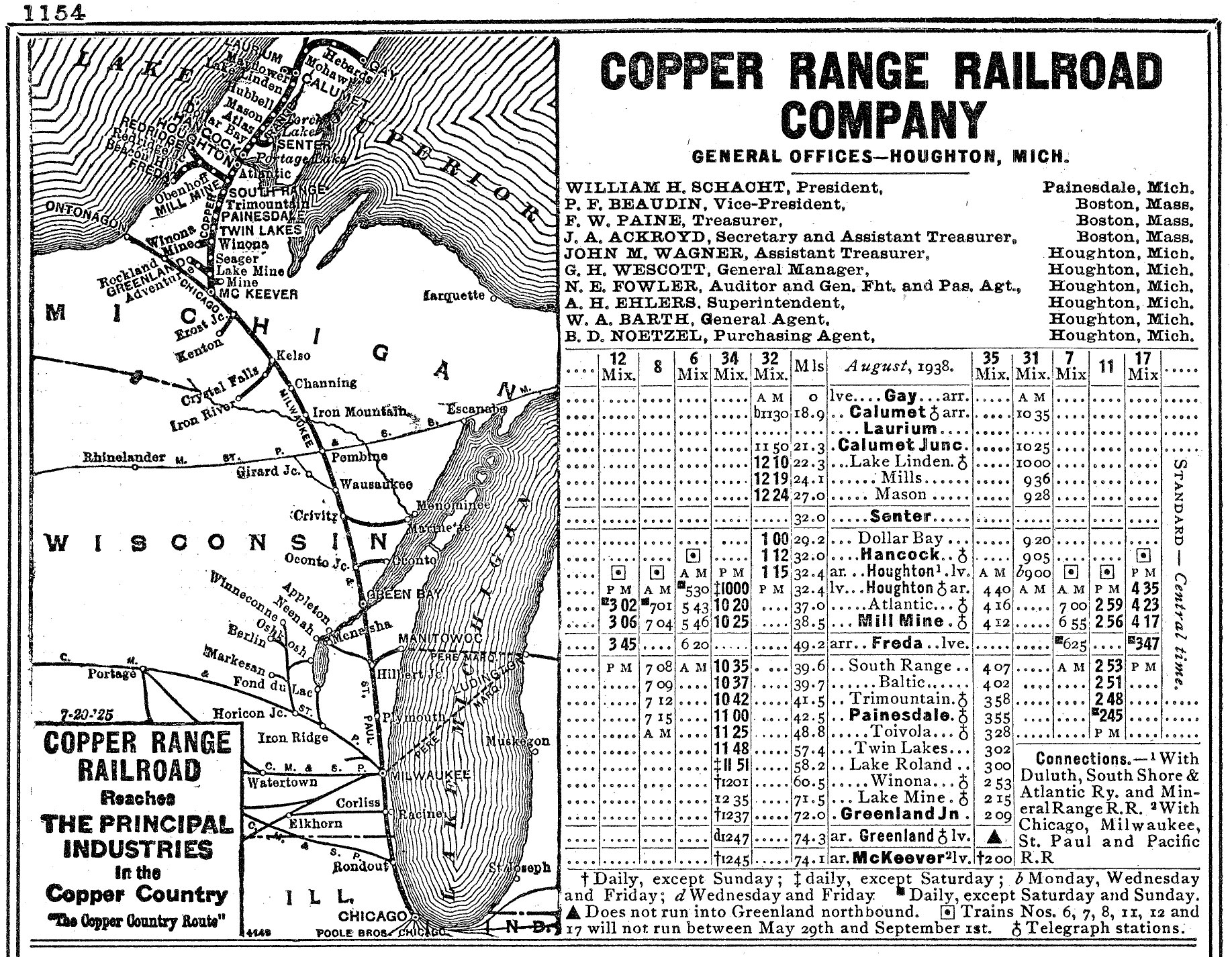 This essentially completed its diesel roster, as steam had been completely retired by 1947 with the purchase of the two DS-4-4-1000s.

Decline for the Copper Range Railroad continued through the 1950s and 1960s as more mines closed. By 1969 only 52.8 miles of the main line remained between Lake Linden (22.3 miles south of the original northern terminus at Gay) and McKeever with the only branch line still in use served the Winona Mine.

On August 24, 1972 permission was granted from the Interstate Commerce Commission (ICC) for total abandonment and the last train ran that year on November 3.

By the spring of 1974 the entire railroad had been pulled up and scrapped. Ironically, today, one could hardly tell trains ever ran through the Keweenaw Peninsula as the Soo Line and Milwaukee Road branches were also abandoned long ago. 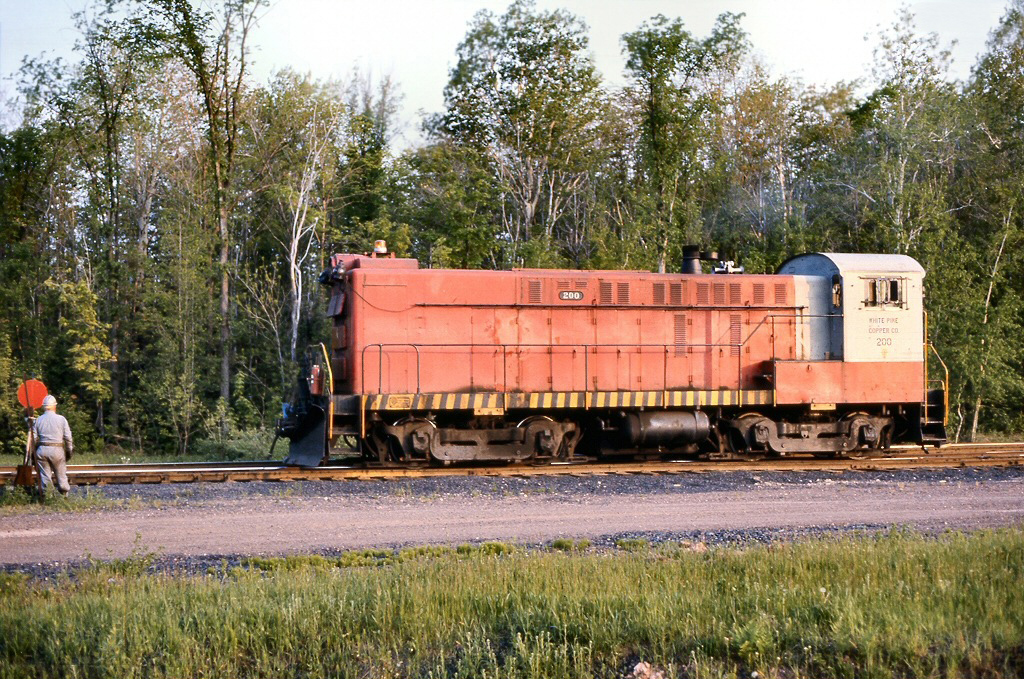 For more reading about the Copper Range Railroad you might be interested in the book Copper Country Rail written by George Anderson, part of Arcadia Publishing's "Images of Rail" series.

The author highlights all of Michigan's Upper Peninsula copper lines through historical photography covering 128 pages, including the DSS&A/Soo Line and Milwaukee Road.

The book is not so much a written history as history presented through the photos and accompanying captions. I have several of Arcadia's "Images of Rail" series that cover different subjects and all are very well presented with excellent photography.