In Electro-Motive F Units And E Units: The Illustrated History Of North America's Favorite Locomotives, noted railroad historian Brian Solomon provides us with a very thorough and detailed history of these classic diesels.

The famous cab models extinguished steam as main line power for virtually the entire railroad industry (some lines would not be convinced until the 1950s, notably Norfolk & Western).

Like most of Mr. Solomon's books, this latest title is published by MBI Publishing/Voyageur Press and filled with large and vivid photos, many of which are in color.

However, don't confuse it with a coffee-table book that offers little in the way of text and information as the author provides an incredibly detailed look at the history of Es and Fs from how they were developed to their decline and continued even today.

In many ways, I'm not sure any other book so completely covers these locomotives, which were pioneers in the diesel era and the first successful such motive power for main line use. 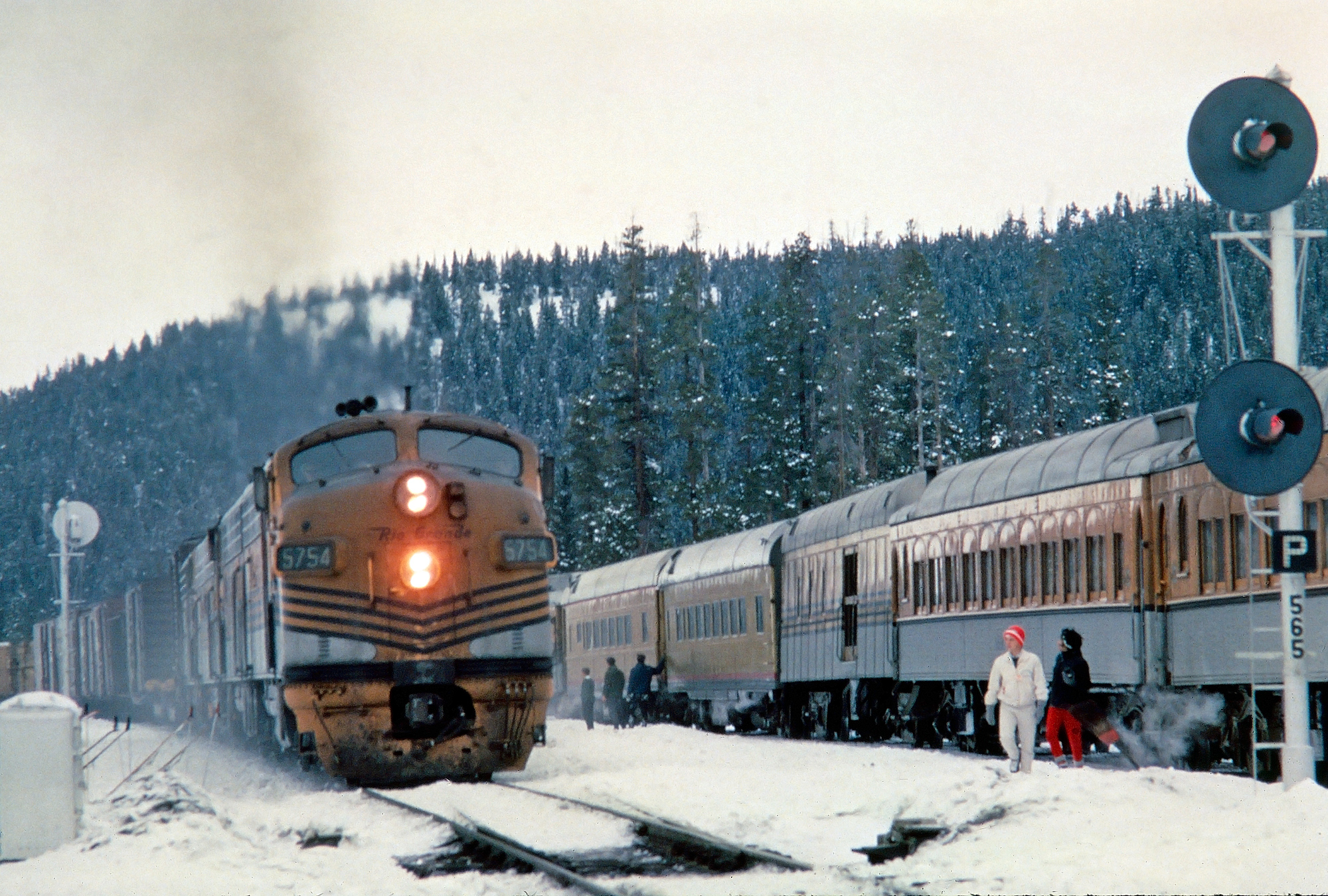 Rio Grande F7A #5754 leads a westbound through Winter Park, Colorado circa 1965. The popular "Ski Train" can be seen at right. American-Rails.com collection.

The book begins with an introduction by looking at the impact that Electro-Motive's diesels had on the railroad industry, enabling lines to save millions of dollars in maintenance costs associated with steam, a motive power that had been in use since trains first plied the rails in the early 19th century.

This first section mostly gives a very brief overview of General Motors' locomotive division from its earliest years through present day and is only a few pages in length.

To fully learn how this model was developed you first need to understand how Electro-Motive (EMC) was created, founded in the early 1920s as a builder of diesel rail cars.

In any event, Mr. Solomon provides a thorough background of the company including its association with the Winton Engine Company and working in collaboration with the Budd Company and Chicago, Burlington & Quincy to unveil the original Zephyr trainset in early 1934.

Interestingly, if General Motors had not stepped in to purchase EMC later in the 1930s the company would almost certainly never have flourished, it was simply neither large enough nor had the massive funding backed by its parent to develop such reliable and efficient machines that would overtake steam as a main line form of motive power.

With millions available in research and development EMC began producing single-unit test models, the first of which was a boxcab, #50 built for the Baltimore & Ohio in 1935.

The development of this locomotive type came about due to the inherent limitations of the fixed streamliner trainsets that did not allow for interchangeability.

The first E model, the EA, was built for the B&O and also the Atchison, Topeka & Santa Fe both of which were eager to use diesels.

It was primarily developed from the boxcab design and was thanks to the efforts of H.L. Hamilton, Richard Dilworth, Martin Bloomberg (who developed the Bloomberg truck), Leland Knickerbocker (creator of the now legendary Warbonnet livery), and Chris Klein.

Released in 1937 the locomotive at first used the Winton 201-A, which was generally reliable but later proved unable to endure the rigors of daily work in service.

This led to the development of an entirely new engine, the Electro-Motive designed 567.

Here, the book provides a detailed history of its meticulous development by EMD engineers as it was ready for use by 1938. The rest of the chapter looks at the many E models built and released by EMD through the 1950s.

It is important to note that this locomotive was developed from the E line and adapted for freight use. By the time of its construction the FT featured the now classic "bulldog" carbody doing away with the slanted nose design of early Es.

While the passenger models sold railroads on their sleek design and attempts to return patrons to the rails through the flashy streamliners of the early 1930s, it was the FT that convinced the industry diesels were the wave of the future for main line freight service.

Everywhere the FT went, lines were amazed by its efficiencies both directly and indirectly (from fuel savings to faster transit times).

While chapter two focuses solely on the development of the FT, its successes, and refinement, chapter three goes into detail highlighting later designs like the F2, F3, and other covered wagon models, detailing their improvements over the original design.

In chapter four, one specific sub-model is covered the odd FL9 built in the 1950s for the New Haven, which was a duel-mode unit capable of operating electrically or with its on-board diesel-powered prime mover.

It turned out to be quite successful and some remained in use through the late 2000s. The rest of the book looks at various Es and Fs, particularly the latter, which have been reconditioned over the years and used for other purposes.

For instance, chapter five highlights the Santa Fe's CF7 program of the 1970s as well as other Fs retrofitted for snow plow service by railroads like the Southern Pacific and Burlington Northern.

In the final chapter of Electro-Motive F Units And E Units, Mr. Solomon looks at those covered wagons which are still used today for various companies' business trains, notably the E9s that Union Pacific employs regularly (although they have been updated with newer EMD prime movers, the 16-645E).

Other lines that use covered wagons currently include Norfolk Southern, Kansas City Southern, Pan Am while others that once did include Conrail, CSX Transportation, BN, and Illinois Central.

Overall, again, if you are looking for a thorough history of E and F locomotives along with a book that offers fabulous photography I would highly recommend Brian Solomon's Electro-Motive F Units And E Units (in general his books never disappoint, no matter the subject).