For much of its life, Southern Railway’s flagship passenger train was the Crescent. This regal train, as it is best remembered, was an “All Pullman” operation running between Washington, D.C. and New Orleans.

However, the train has its roots dating back to the late 19th century, although in it’s earliest form it never traveled a route nearly as long as its later successor.

Southern's flagship is also distinguished as being the last privately operated streamlined passenger train in America when the Southern finally relinquished control of the train to Amtrak in 1979, eight full years after the national carrier began intercity operations!

The Southern took great pride in its passenger fleet believing in the highest quality of service and keeping trains clean and on time (much of the same reason why it was so successful hauling freight as well).

These traits have persevered throughout the years and those who rode its train still remember them fondly today. 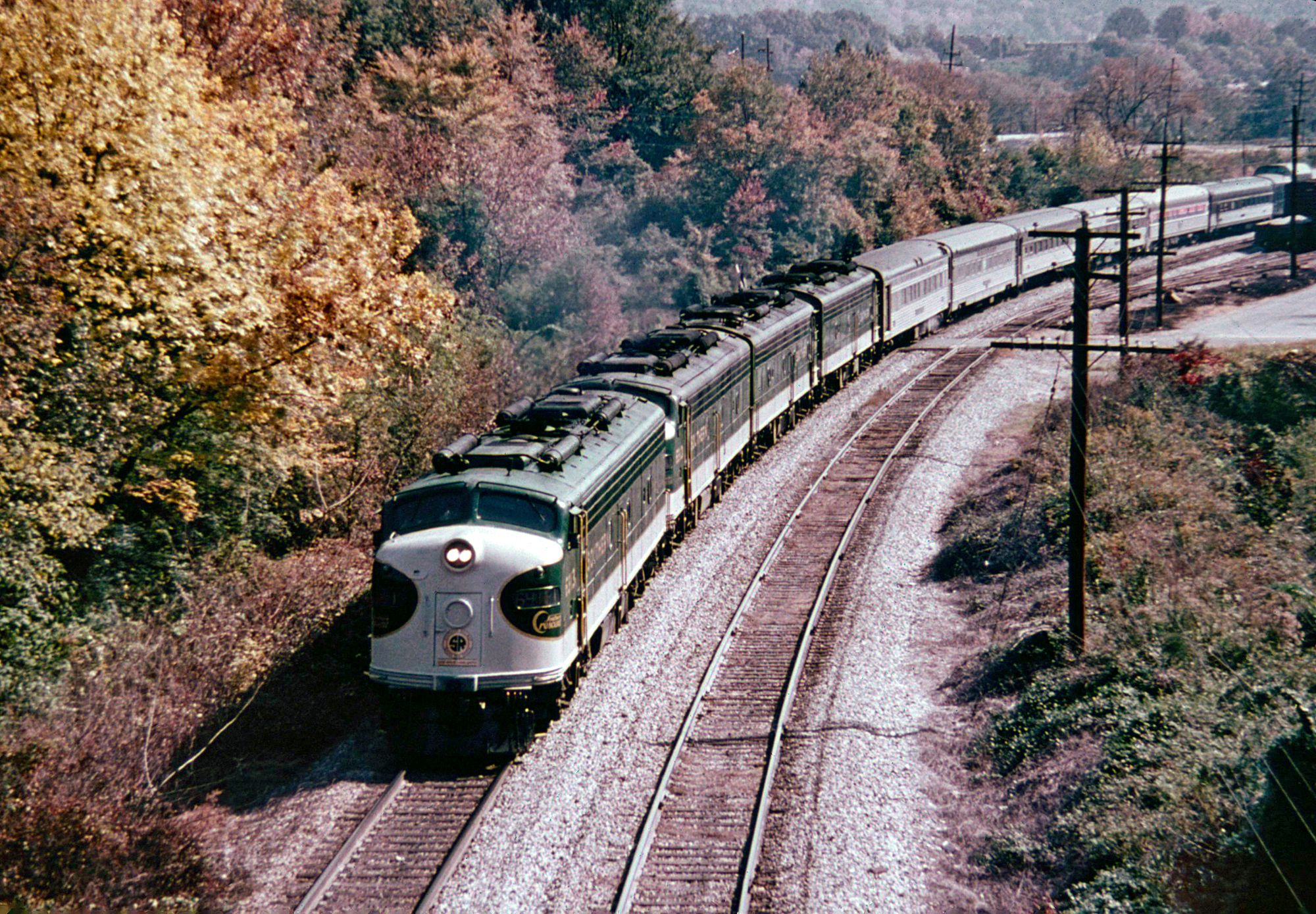 A quartet of Southern E8A's, led by #6913, are about to cross under the 10th Street overpass in Anniston, Alabama with the southbound "Southern Crescent," on October 23, 1977. D.A. Woodworth, Jr. photo. American-Rails.com collection.

The Crescent has its beginnings dating back to a Southern predecessor, the Richmond & Danville in which the train was then named the Washington & Southwestern Vestibuled Limited and was inaugurated in 1891 (three years before the Southern itself was created!).

Prior to the Southern gaining its own lines between Washington, D.C. and New Orleans the Vestibule reached the two destinations via connections with railroads Atlanta & West Point, Western Railway of Alabama (both railroads were part of the West Point Route, and the Louisville & Nashville. In 1925 the train was renamed the Crescent Limited and updated with new equipment.

It was a year later that the train became so well remembered when the Southern’s famous Class Ps4 Pacific, arguably the most beautiful steam locomotive design ever built, took over as power adorned in a beautiful livery of Virginia green with gold and silver trim. 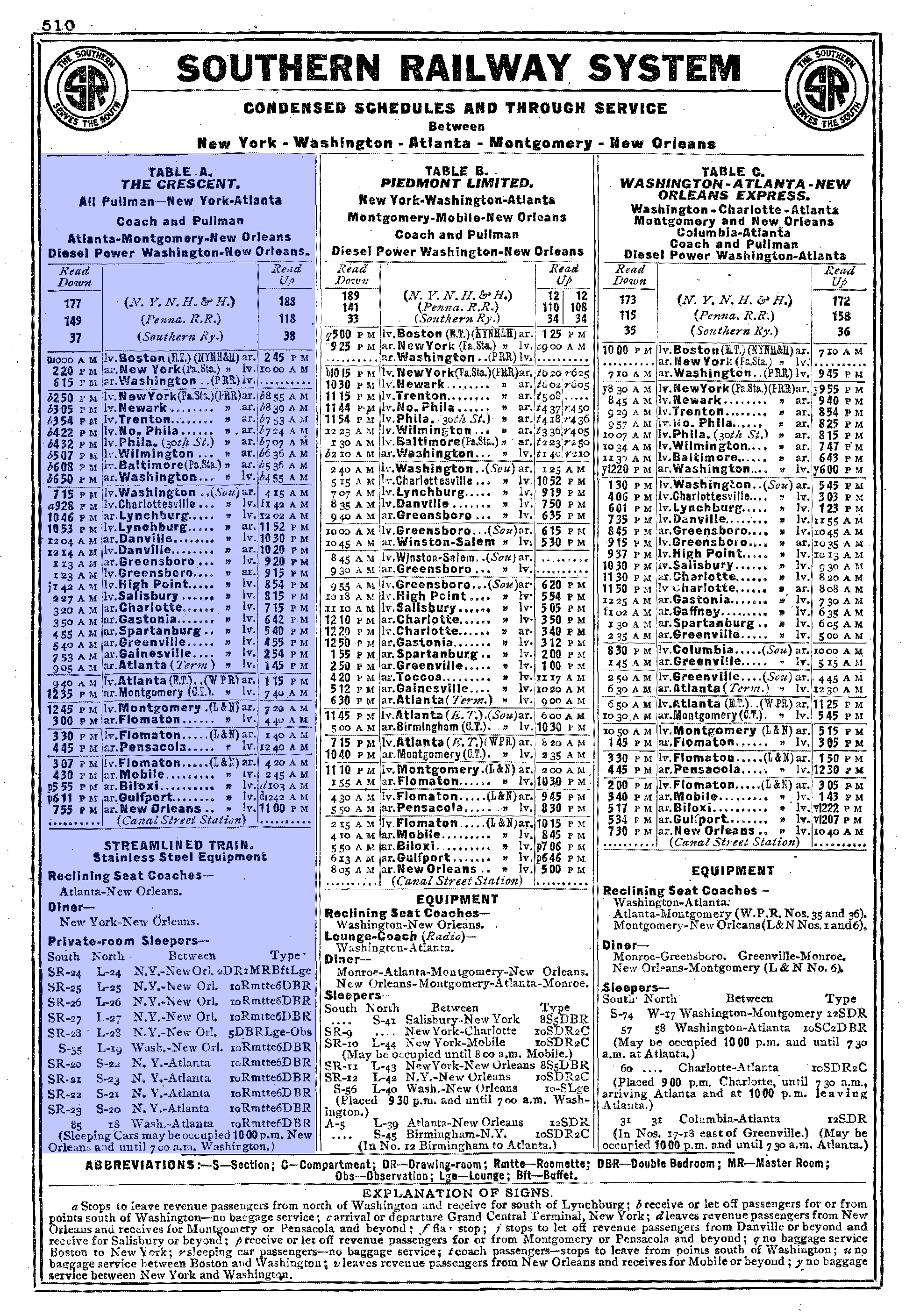 In 1938 the train was again renamed to simply the Crescent, in name it kept for the next four decades. And, just a few years later in 1941, the Pacifics lost their status as the premier source of power for the flagship train when EMC E6A streamlined diesel locomotives took over (also adorned in the Virginia green livery).

In 1950 the train finally received full, lightweight, streamlined cars to match the locomotives (and, in 1951, the Southern upgraded its passenger locomotive fleet with E8As from EMD). 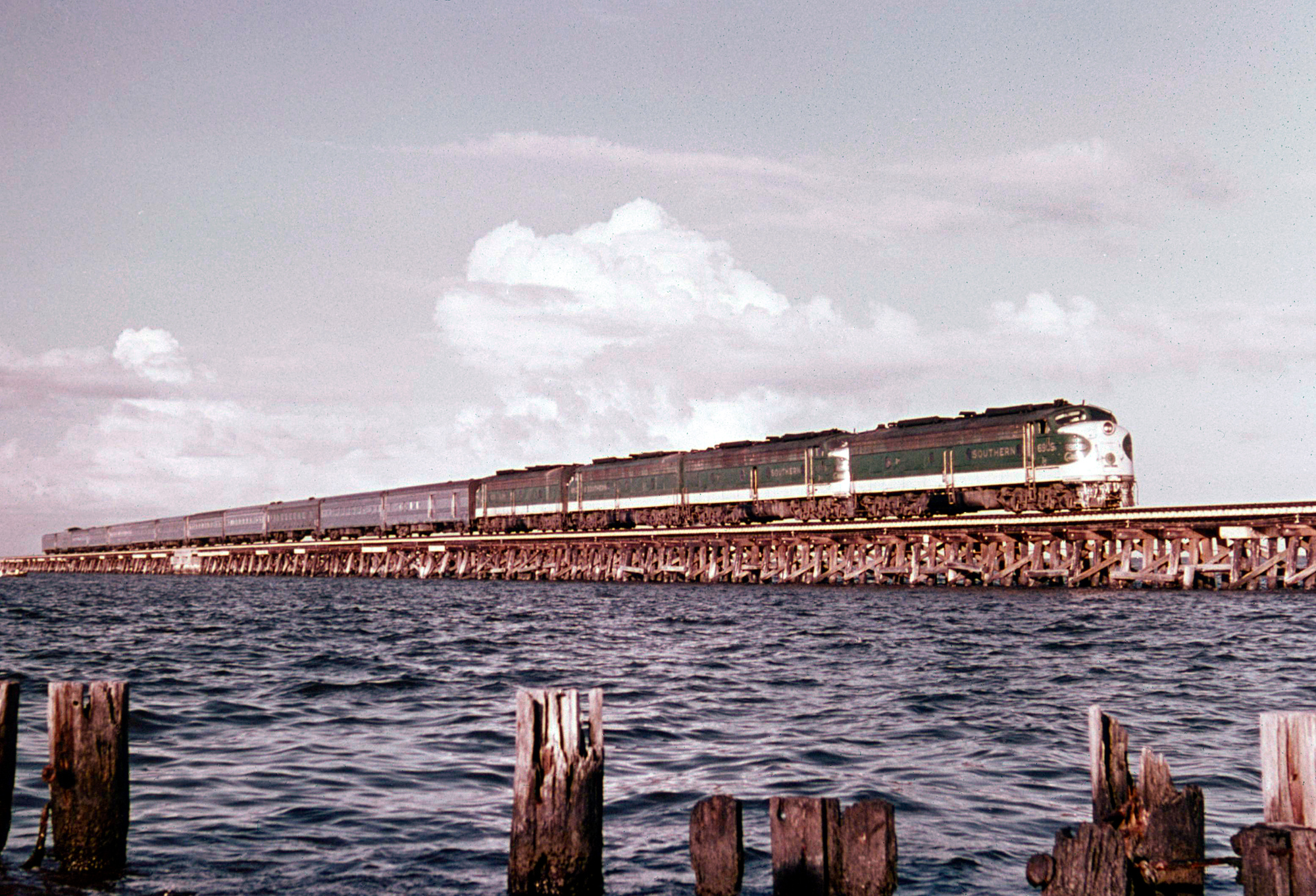 A quartet of Southern Railway E8A's, led by #6909, hustles across Lake Pontchartrain in Louisiana with the "Southern Crescent" on July 19, 1978. Ronald Johnson photo. American-Rails.com collection.

The new reequipped and streamlined train looked much different, both inside and out, with its new lightweight equipment.

Having a new consist that included things like coaches, diners, sleeper-lounges, full sleeping cars, and sleeper-observation the train was now completely contemporary.

Of particular note with the new equipment was the sleeper-observation, which featured extra-large windows with elevated seats that faced the outward so passengers could watch the scenery pass by.

The other feature of interest was master bedrooms, large enough to sleep three and include a private shower!

Master bedrooms on board passenger trains were extremely rare after World War II with the Pennsylvania Railroad’s flagship, the Broadway Limited, the only other train to include such a treat.

For the next twenty years Southern's flagship renamed a top-notch operation (although it was downgraded in the 1960s), vaunted for its on-time and splendid service.

Interestingly, as passenger railroading waned just prior to Amtrak taking over all intercity operations, the train actually expanded operations, albeit by the combination of trains, by expanding service to the Northeast.

In 1970 the railroad combined the Southerner, which operated as far north as Boston with the Crescent to form the Southern Crescent. The new train, in conjunction with the Penn Central, operated between Boston/New York and New Orleans.

This new train would also remain the last privately operated streamlined passenger train in America. The Southern Railway was very proud of its passenger fleet and the service it provided passengers onboard those trains.

So, it opted out of handing its flagship train over to Amtrak when the national carrier began operations in the spring of 1971. Instead, the train regained its luxurious Virginia green, gold, and silver livery in 1972 with E8As again leading the famous train. 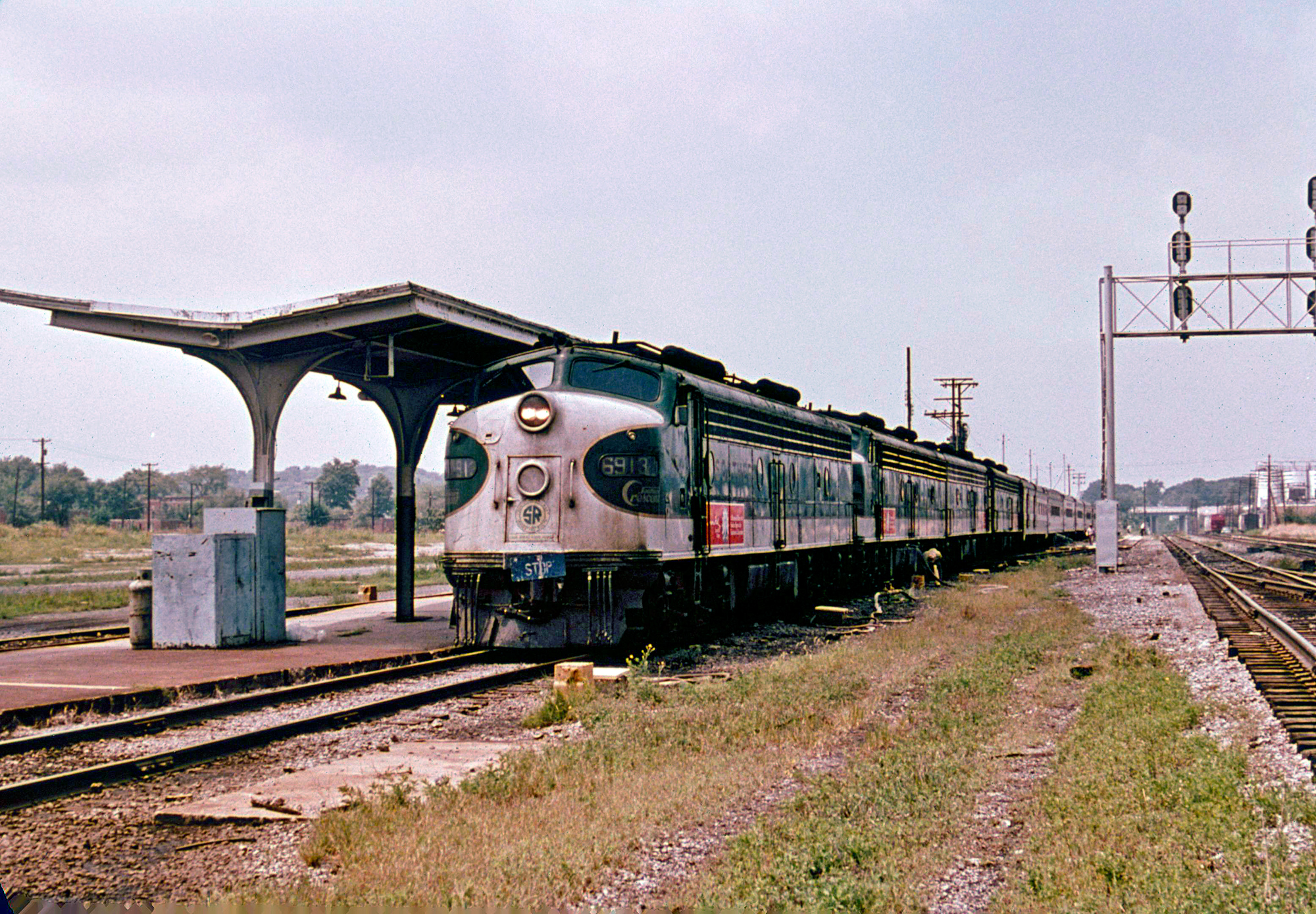 For the next seven years the train remained under Southern operation until the railroad finally handed over the train to Amtrak in 1979, thus ending private operation of passenger trains.

Today, while the train once again is named simply the Crescent its routing is slightly different than Southern's version.

It still connects New York with New Orleans but does so via Birmingham and Meridian (the routing of the original Southerner instead of its original route that connected Montgomery and Mobile).

Additionally, and perhaps more visible to passengers and/or those who rode the original, Amtrak's version is not nearly as opulent.