The SD80MAC was essentially an identical sister to the successful SD70 line except for its increased horsepower.

Much longer than any single locomotive EMD had before produced aside from its experimental DD series, the model did have some noticeable design changes from the SD70 series, aside from increased length.

The model was the first EMD locomotive to feature the flared rear radiator design that had been a common trait of General Electric diesels dating back to the 1970 and the "Dash 7" line.

While other railroads would take orders for the SD80MAC only Conrail actually purchased any units taking delivery of its fleet in the 1990s.

Railfans have come to refer the locomotives as "Conrail Cadillacs" and after the railroad was split between CSX and Norfolk Southern the units were divided between the two companies.

Today, neither CSX nor NS operate the aging '80MAC's.  In 2014, the former sold its remaining twelve to the latter for twenty-three SD40-2's; six years later (February, 2020), NS sold its entire fleet to Canadian Pacific and Progress Rail. 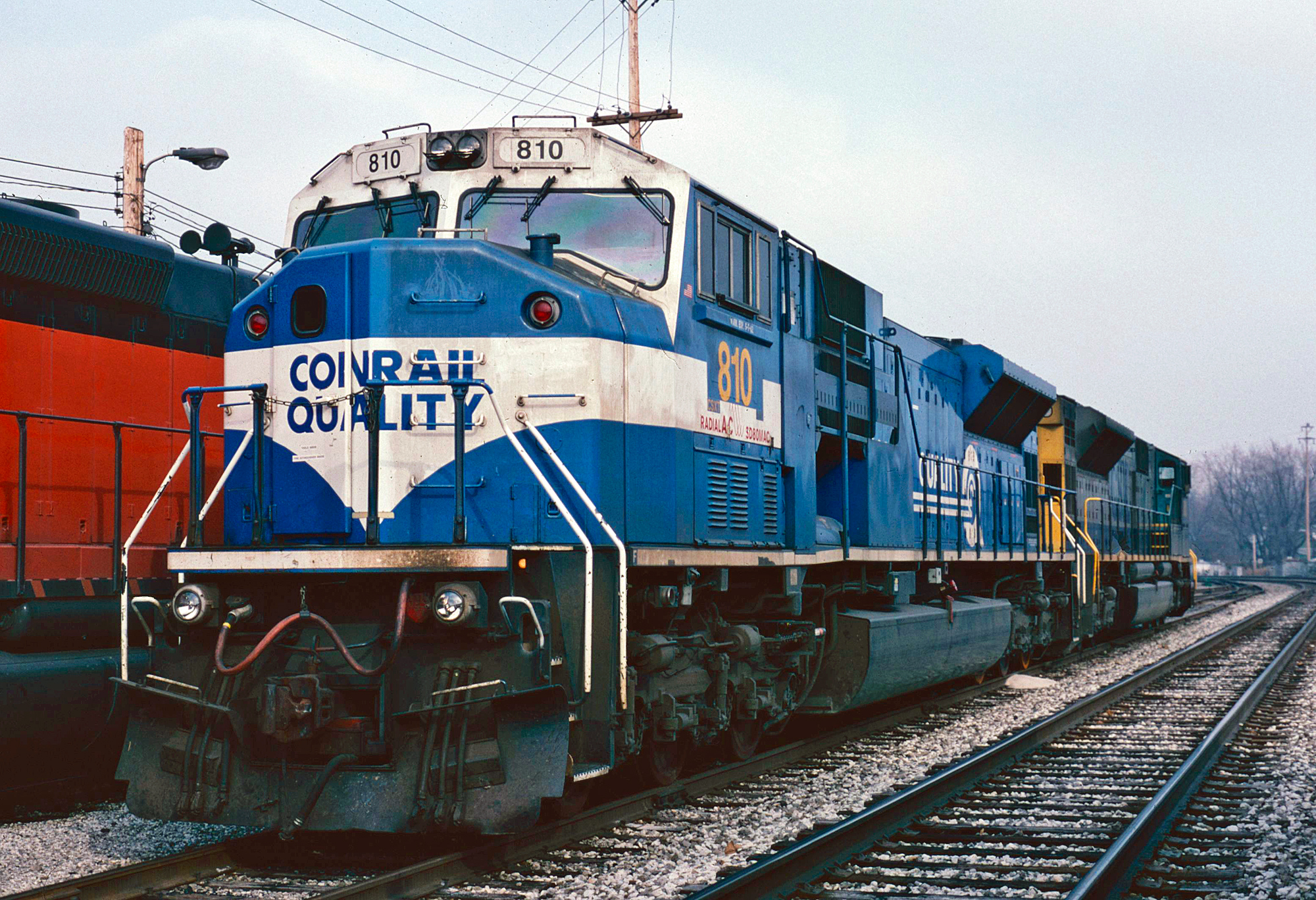 The SD80MAC is virtually identical to the SD70 series except that it is rated at 5,000 hp instead of the SD70’s 4,300 horsepower, and as mentioned above its rear flared radiator sets forward of the rear of the locomotive.

The unit is also very rare, albeit it is relatively new. Built in 1995 the SD80MAC was purchased by only one U.S. railroad, Conrail, which took delivery of 30 of them. Only 8 other SD80MACs are roaming around North America although all 38 are still in active service.

Of the 30 SD80MACs Conrail purchased, 17 went to Norfolk Southern and 13 to CSX during the split of the railroad in 1999. Eight of CSX's SD80MACs are currently off of the property and in service on Mexican carrier Ferromex.

The SD80MAC's prime mover is variant of the engine used in the SD70 series, the model 710G3ES. The engine was a 20-cylinder design, the first Electro-Motive had employed in one of its locomotives since the SD45 series of the 1960s.

The SD45 actually proved to be a quite successful model for EMD despite the fact that early examples of the locomotive had reliability issues with crankshafts snapping while in operation.

Once the company was able to correct these problems by redesigning the locomotive's engine block the SD45 proved a reliable and powerful locomotive that can still be found in use all across the country today.

The SD80MAC did not suffer from reliability issues in terms of a problematic engine with those issues largely having been solved with the transitional SD60 line.  In many ways, the model was the continuation of the high horsepower race between GE and EMD that had been ongoing since the 1970s.

This race peaked during the 1990s with the release of the SD90MAC and General Electric's AC6000CW. While GE's model sold more units than EMD's both were plagued with reliability issues which essentially ended the race between the two companies.

Additionally, railroads discovered that extremely powerful locomotives wasn't necessarily a good thing and to date, the generally accepted horsepower is somewhere between 4,000 to 4,500.

The "MAC" designation of the SD80 means two different things. The "M" regards the locomotive as featuring the now standard wide, "safety" cab that has been a common feature on motive power since the FRA mandates its use in the early 1990s.

The "AC" refers to the model featuring an alternator for increased tractive. Up to that time the SD80MAC offered some of the highest tractive efforts of any locomotive the company had produced; 185,000 pounds starting and 137,000 pounds continuous.

Interestingly, the Chicago & North Western was interested in purchasing new SD80MACs to further update its motive power fleet but was acquired by Union Pacific before being able to do so and its order was canceled.

Additionally, Conrail was after more as well until the 1999 NS/CSX split also canceled its order (the railroads replaced this with SD70 variants instead).

The history of diesel locomotives has been fascinating, not only because of the many interesting designs during the last century but also their dispositions; General Electric's "Universal" series provided a foothold for the company in the market.

However, most U-boats were sold off and scrapped after barely two decades of service.  This trend has seemingly continued with GE's newer models as well, such as the C40-9W, C44-9W, and AC4400CW.  Newer EMD products have met a similar fate, like the SD70MAC and SD80MAC.

No designs have enjoyed the tremendous longevity of EMD's second-generation era, like the GP40, SD40 series, GP38's, SD50's, and others.  You can still find these locomotives in service today, ironically having outlived newer GE and EMD models.