The Camas Prairie Railroad, primarily located in Idaho and dating to the first decade of the 20th century is fondly remembered despite the fact that it was a paper company which owned none of its own equipment.

The CSP, its official reporting marks (although it was also known as the CPR, which should not be confused with the Canadian Pacific), was jointly owned by the Union Pacific and Northern Pacific which had created the railroad as a means of settling a dispute of competition between the two.

To railfans and historians the Camas Prairie is legendary for its numerous tunnels, high timber trestles (earning it the name as the railroad on stilts), and overall breathtaking scenery of the Pacific Northwest.

Eventually, the company's lines were spun-off as an independent shortline becoming Camas Prairie RailNet and later as the Great Northwest Railroad currently owned by Watco.

The history of the Camas Prairie Railroad begins in the late 19th century as the owners of the UP and NP, Edward Harriman and James J. Hill (the "Empire Builder"), battled each other to see who could better serve the Pacific Northwest via the most rail lines.

For UP it held a major stake in the region when it took control of the Oregon Railroad & Navigation Company (OR&N) in 1898 which would ultimately come to own more than 1,000 miles of track throughout Idaho, northern Oregon, and eastern Washington. 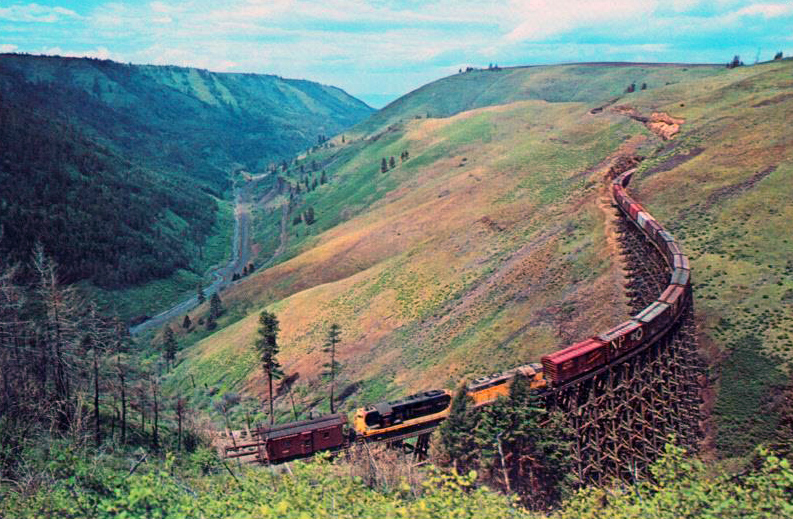 A postcard of the Camas Prairie Railroad and its famous Half Moon Trestle within Idaho's Lapwai Canyon. Note the Northern Pacific and Union Pacific freights assisting the train, dating the photo probably to the 1950s.

The first section of what would become the CSP began with the 1907 opening of NP's Clearwater Short Line Railway Company, a 62.7-mile route which ran from Arrow, Idaho eastward towards Stites in the state's northern panhandle.

As with virtually all of the Camas Prairie the route was riddled with numerous tunnels, tight curves, stiff grades, and high trestles.  Around the same time NP was already constructing an additional line south of Spaulding (just west of Arrow). Likely the most circuitous along the entire future CSP, it wound and twisted its way southeastward to Grangeville a distance of 66 miles.

This line's most notable location is east of Culdesac where an eight-mile loop hugs the Lapwai Canyon and uses 11 trestles to span the distance with grades as steep as 3%. The NP opened this branch a year later on December 9, 1908.

Earlier that year in July the Union Pacific's OR&N had completed its route to the west between Riparia, Washington and Lewiston, Idaho where it connected with the NP.

This line followed the Snake River and was 72 miles in length. With the two large Class Is continuing to spar over rights-of-way and gaining the upper-hand they eventually decided it would be cheaper and more efficient to setup a mutually-owned railroad which would act as a feeder system. 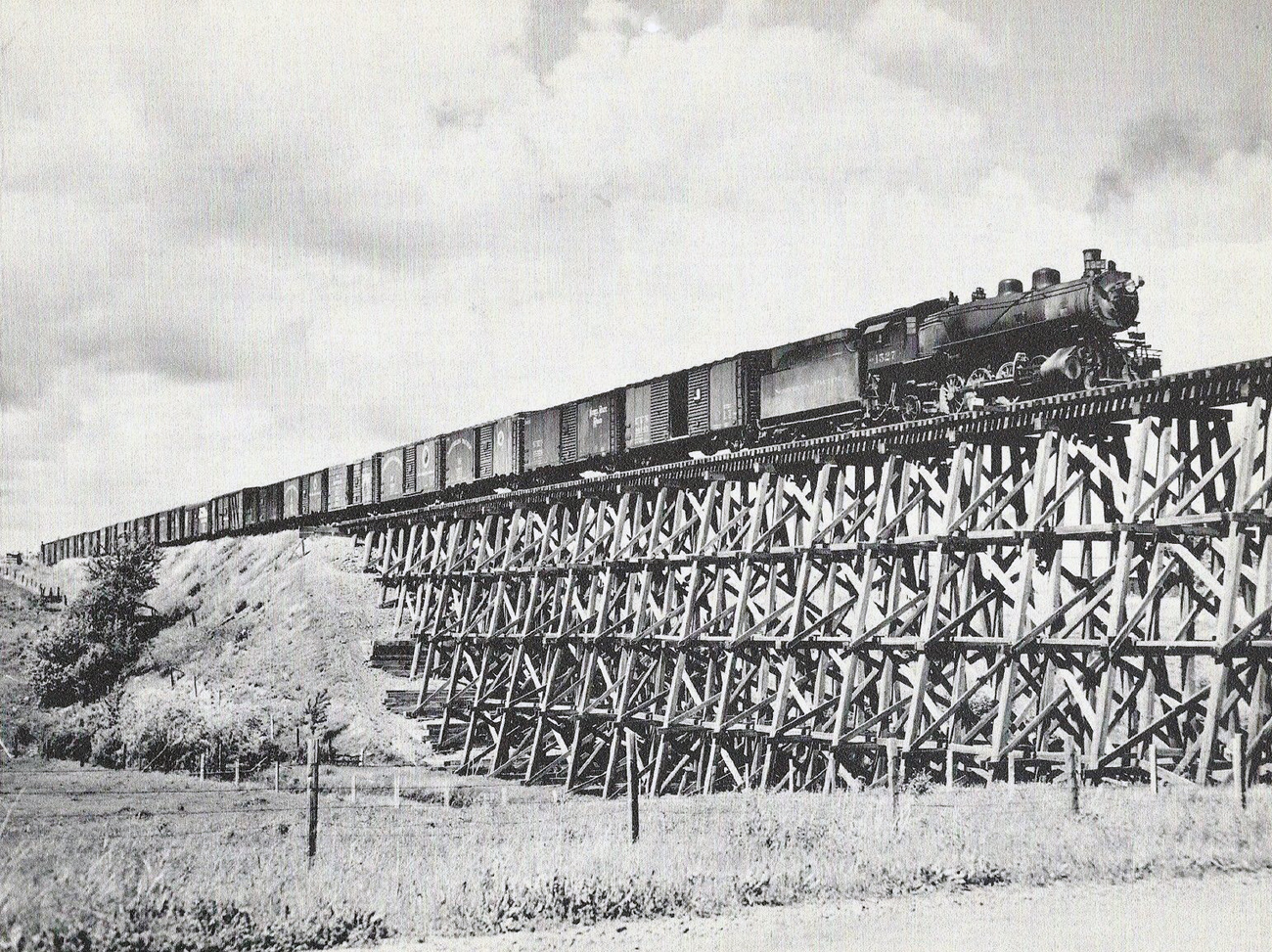 As a jointly-owned subsidiary of NP and UP the short line was equally operated by both roads, as mentioned above, and setup its headquarters in Lewiston (complete with its own office building) where all of its routes radiated away from.

This cooperation was of great benefit to local shippers as the CSP came to move vast amounts of timber and related wood products (which typically made up 70% of its traffic) in the heavily forested region serving major customers that included Weyerhauser and the Potlatch Forest Services, Inc. (later Potlach Corporation).

Through Potlatch (and its subsidiary the Clearwater Timber Company) the railroad expanded for the last time when the two worked together in building an extension from Orofino, Idaho (along the NP's original line to Stites) to Headquarters to tap additional timber reserves. 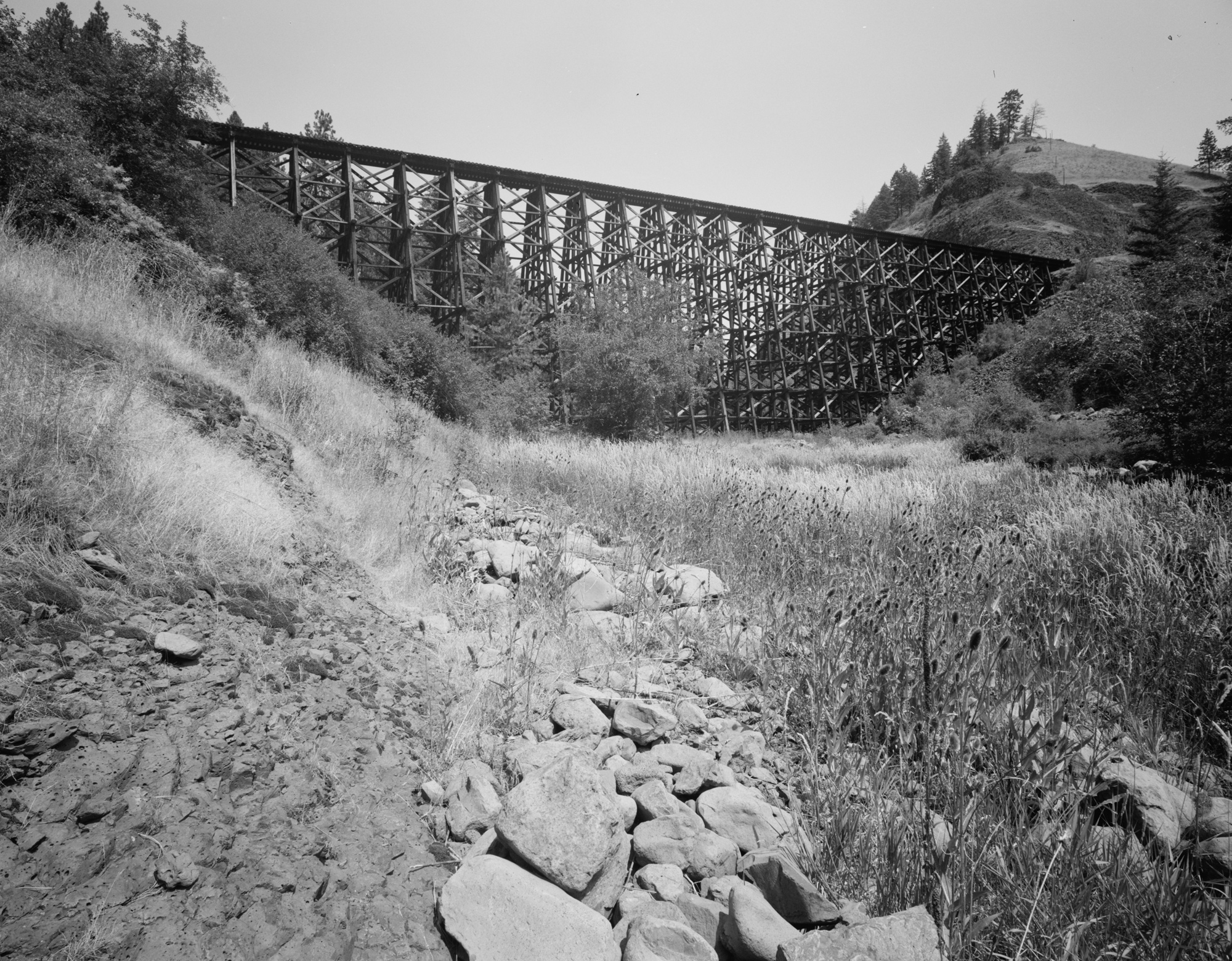 Massive trestles, both wooden and steel, spanning deep canyons is what made the Camas Prairie Railroad famous. Pictured here is the wooden span over the Rock Creek Canyon in Idaho at Milepost 17.14. Glenn Rudolph photo.

This 40-mile line grew the Camas Prairie to its peak size of 267.7 miles with a system that radiated in all directions from Lewiston except northward. Aside from timber it also hauled several various types of agriculture.

Since the CSP owned no equipment of its own everything was supplied via its parents, and during the steam era locomotives typically consisted of NP 2-8-2 Mikados and UP 2-8-2 MacArthurs (a different name given to the same wheel arrangement, with the MacArthur designation used after the start of World War II as the Mikado name originated in Japan) for main line power.

Light duty work was usually handled by 4-6-0 ten-wheelers and even small diesel switchers in later years. While the Camas Prairie also offered passenger service its relatively lightly-populated network resulted in low overall ridership. As such, trains were typically small with just a few cars and gas-electric "Doodlebugs" also came to be used. 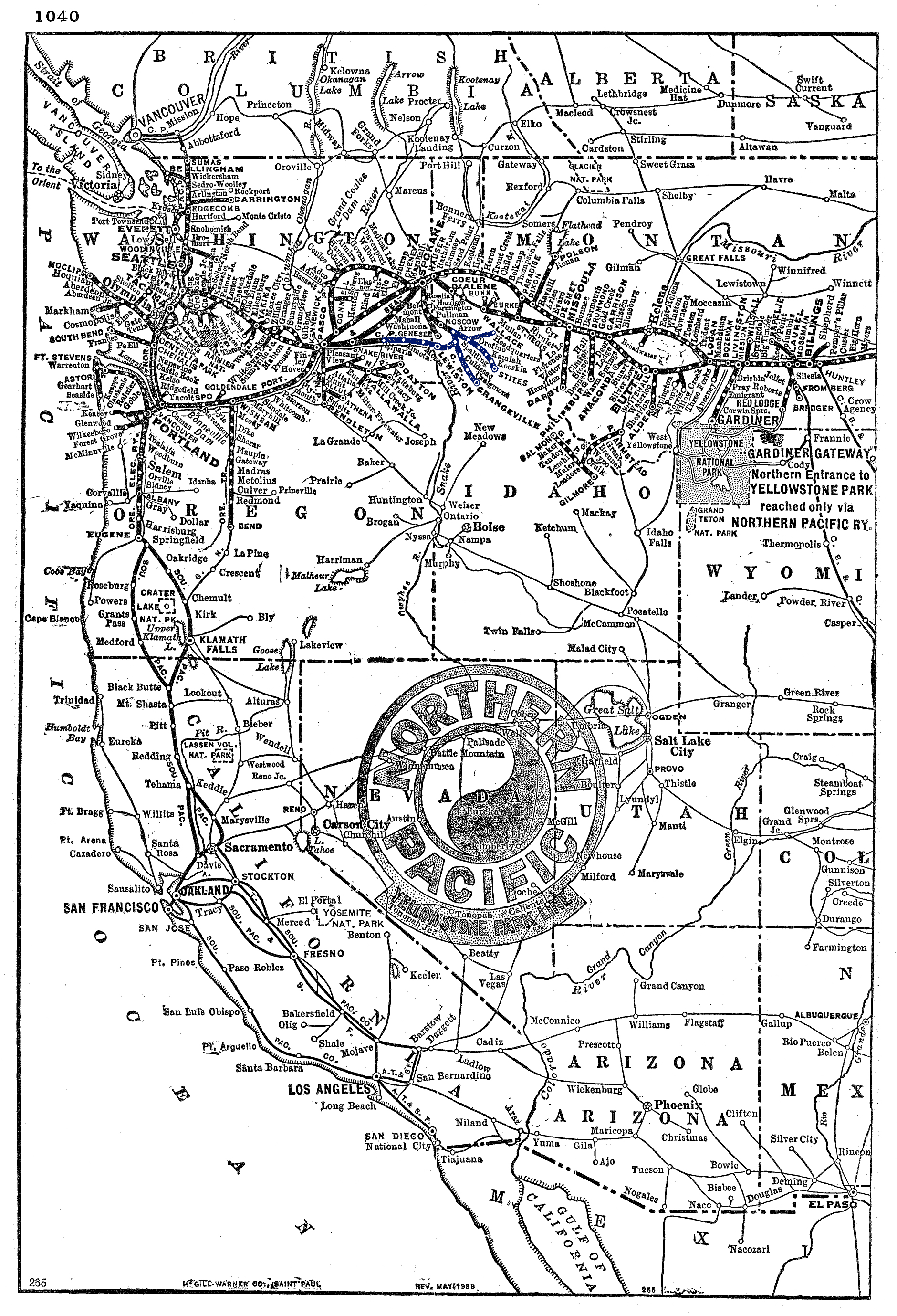 By the 1950s the Camas Prairie Railroad was seeing some 35,000 annual carloads and almost always remained a profitable operation year-to-year due to the seemingly never-ending supply of forest products that, among other things included lumber, logs, decking, poles, mine props, and residential siding. 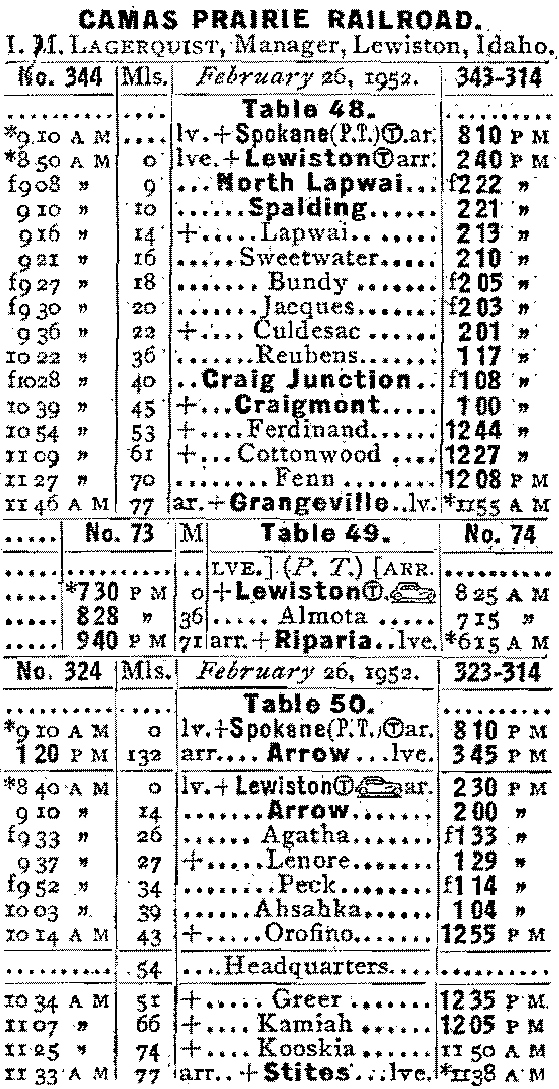 During the diesel era the railroad relied, again, on UP and NP equipment (after 1970 Burlington Northern). In 1985 the CSP saw its first cutbacks when 11.7 miles of tack was abandoned, between Revling and Headquarters as well as between Kooskia and Stites that reduced the system to 256 miles.

The biggest change occurred in 1997 when then Burlington Northern Santa Fe and UP agreed to shed the railroad entirely to North American Railnet Inc. based in  Bedford, Texas (which owned several other short lines) renaming it as Camas Prairie RailNet. 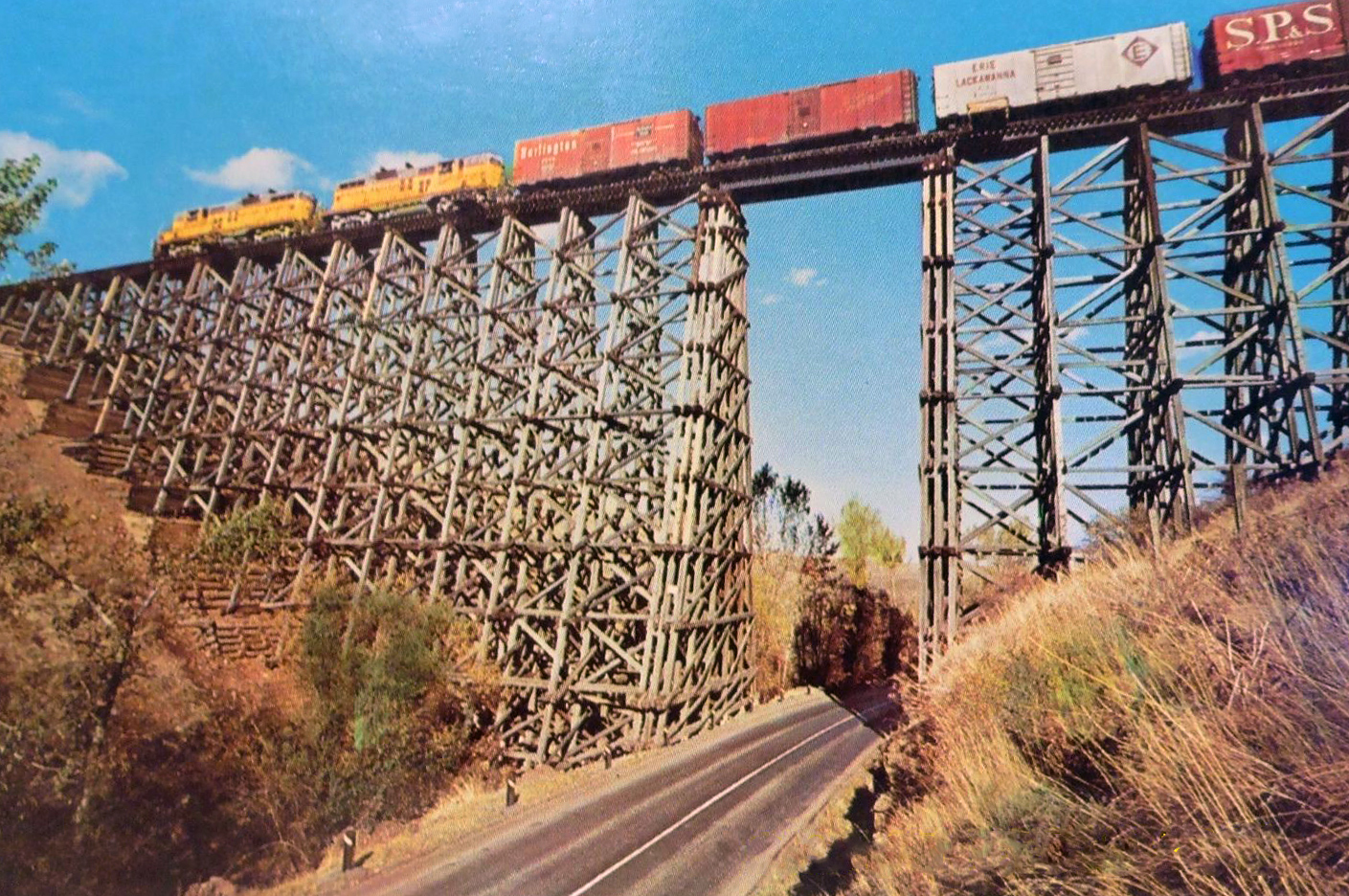 A pair of Union Pacific GP9's cross the high timber trestle along the Camas Prairie Railroad spanning Idaho's Highway 95 between Craigmont and Cottonwood.

The deal was finalized in April, 1998 although further abandonments soon continued when the Spaulding-Grangeville segment (the 2nd Subdivision) was let go with the final revenue train operating the line on November 29, 2000 (in 2002 this route was acquired by the Bountiful Grain & Craig Mountain Railroad as far as Cottonwood that is still in service today).

In 2004 the railroad was again sold to Watco Companies, LLC, which renamed it as the Great Northwest Railroad (GRNW). Under Watco ownership only the original route between Lewiston and Riparia, Washington is still operated by the GRNW (the 3rd Subdivision); the rest of the original Camas Prairie has been leased to the BG&CM between Lewiston and Kooskia (the 1st Subdivision).

While Watco still owns the 4th Subdivision between Orofino and Jaype it has been out of service for several years.   Current traffic for the Great Northwest Railroad includes wood products, agriculture, paper, tissue, chemicals, and food products.