Perhaps few other museums rival that of the California State Railroad Museum in terms of displays, visitors, and overall size.

The museum, situated in Sacramento, is one of the city’s top tourist destinations, seeing over a half-million visitors annually and it is a testament to just how interesting and engaging railroad museums can be.

Given the sheer size of the CSRM collection it will not be possible to cover them all here. However, listed below in this article are many of the museum's most significant and best preserved pieces.

Because of the resources available to it, like few other museums across the country, the museum is large enough to have various operating departments. 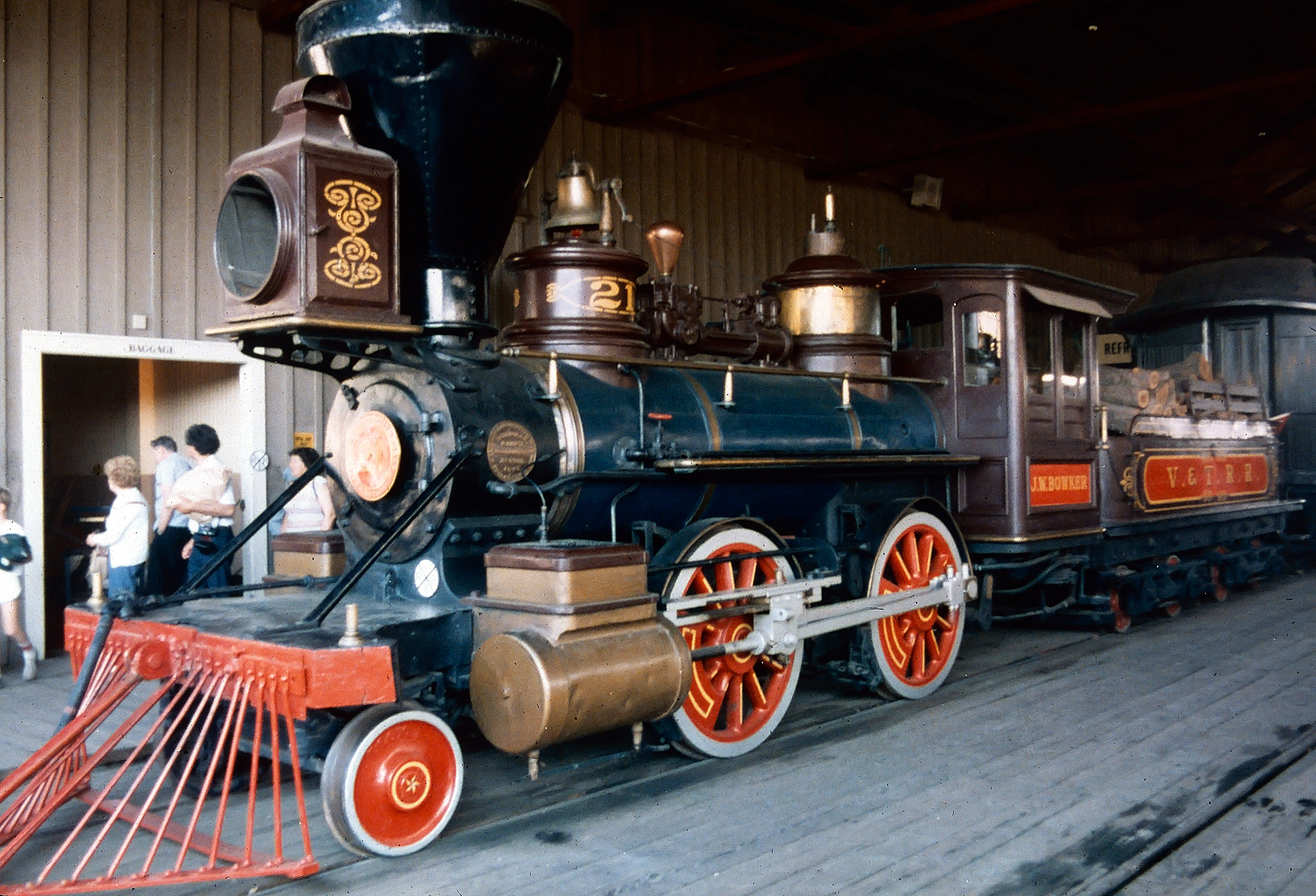 Virginia & Truckee 2-4-0 #21, named the "J.W. Bowker," sits on display at the replica Central Pacific station at the California State Railroad Museum, circa 1976. This locomotive was built by Baldwin in 1875. William Myers photo. American-Rails.com collection.

The history of the California State Railroad Museum predates perhaps every other related facility in the country save for the Smithsonian itself.

While the CSRM is a state founded, funded, and operated facility its roots begin in 1937 when local train enthusiasts from the San Francisco area created the Chapter of the Railway & Locomotive Historical Society in an attempt to preserve and keep alive California's railroad history.

By 1976, when the state created the CSRM, the Chapter had donated more than 40 locomotives and freight/passenger cars to the Department of Parks & Recreation.

Since then, and with the backing of state funding the California State Railroad Museum has become a massive operation, similar in scale to what you will find at the Illinois Railway Museum.

Today, it features six originally constructed buildings, more than 225,000 square feet of space for visitors to enjoy, and twenty-one pieces of rolling stock that have been completely restored (they perhaps look better today than they ever did while in operation).

Additionally you can find all types of exhibits and historic artifacts located through the property including original railroad china, a replica Central Pacific Railroad freight depot, original hand tools, early signals, and much more.

Most come to the museum to see the locomotives, which range from early examples like Virginia & Truckee 4-4-0 #12 built in the late 19th century to the only surviving example of Southern Pacific's legendary "Cab Forwards," 4-8-8-2 #4294 manufactured during World War II.

There are also several notable diesels preserved on-site.  While most are of Southern Pacific and Santa Fe heritage of Electro-Motive lineage some rarer pieces include a Fairbanks Morse H-12-44 and an American Locomotive Company RSD-15 "Alligator" (so-named for its very long nose ahead of the cab).

Northwestern Pacific 4-6-0 #112 (Built by the American Locomotive Company in 1908.  The railroad's only surviving steam locomotive.)

Southern Pacific ML-4000 #8799 (Built by Krauss-Maffei in 1964 as #6410.  Largely restored and rebuilt to original appearance by the Pacific Locomotive Association.  It is currently not operational.)

Among the many attractions includes facilities available for rent if you are interested in having a gathering on location, there are numerous events ongoing throughout the year.

Some of these include:


The museum offers scheduled train rides throughout the year, typically powered by 0-6-0T steam locomotive #10 and dressed up as a Central Pacific unit.

In addition, you can even volunteer and help the museum not only stay maintained but also work to restore the many pieces of equipment under they have slated to be repaired!

Finally, the California State Railroad Museum features an additional exhibit unique to perhaps only itself and the Illinois Railway Museum, a comprehensive library full of historic information about railroads to both California as well as the country in general.

While CSRM does not allow its books and other material to leave the building the library is open nearly year-round without charge.

If you have the opportunity to use the library I would certainly take advantage of it, you won't find many like it anywhere else.  So, if you are planning a visit to the Sacramento area a visit to the California State Railroad Museum.

Likewise, if you are perhaps interested in helping the museum in some way please do not hesitate to get in touch with them to see what type of volunteer work is available.  For more information about the museum please visit their website.