Connecticut Railroads In "The Constitution State"

Connecticut railroads have been established since the industry's infancy during the first half of the 19th century. While the Constitution State has never had many miles of railroad it has held its importance in the Northeastern rail system throughout the years.

For instance, its most prominent railroad was the New York, New Have & Hartford, commonly known as simply the New Haven. The company stretched throughout the state and provided commuters an important mode of transportation heading to either New York City or Boston.

The railroad also operated most of the state's rail lines until the Penn Central merger of 1969.  In addition to its key Boston-New York route to the south, the New Haven operated numerous secondary corridors into the northern interior.

Many of these have since been abandoned leaving Connecticut with about half of its all-time rail infrastructure still in service.

In addition, the state is served by Metro-North and Shore Line East commuter train services, which play important roles in keeping the public on the move (many of these lines trace their roots back to the NYNH&H). 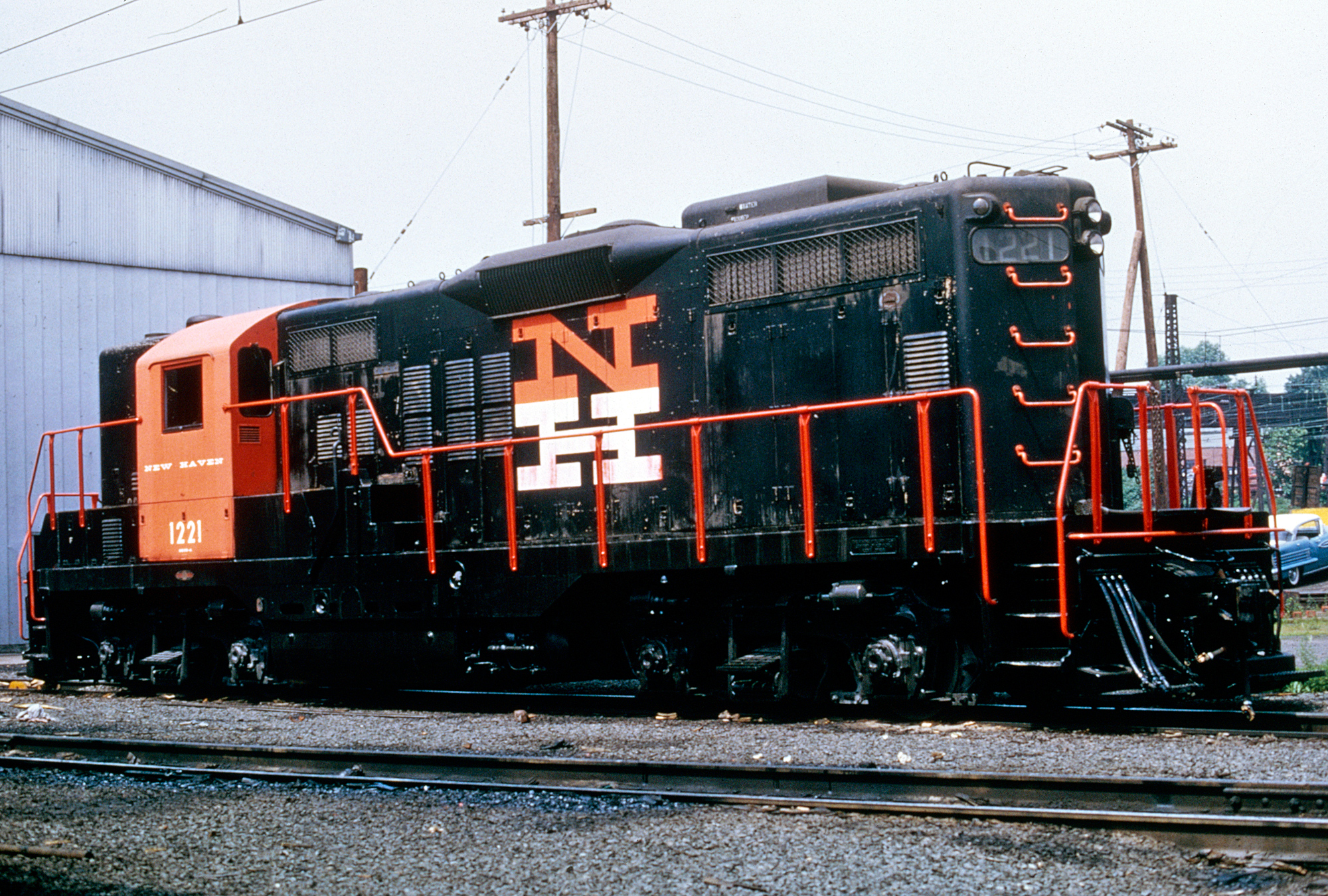 New Haven GP9 #1221 lays over in New Haven, Connecticut during the 1960s. The New Haven was not a large buyer of EMD products but did acquire thirty GP9's along with some SW1200's and the classic FL9. American-Rails.com collection.

Connecticut railroads have their beginning in 1838 when the Hartford & New Haven completed its line between Meriden and New Haven, a distance of about 20 miles (the H&NH had originally been chartered in 1833 although funding shortfalls caused the completion of the line to be delayed).

The H&NH would go on to merge with the New York & New Haven in 1872 to form the now classic New York, New Haven & Hartford system.

While other railroads had trackage through Connecticut, notably the Central Vermont Railway none had quite the presence of the New Haven, which had a virtual monopoly (interestingly, a number of classic New England railroads did own lines that came close to entering the state).

The CV system had a history that dated back to around 1845 when the Vermont Central Railroad was chartered to connect Burlington, Vermont with Windsor, Connecticut.

The railroad had completed the line by 1849 and by 1873 had changed its name to the Central Vermont Railroad as it continued to grow (a few years earlier it also gained control of the Rutland Railway).

Bankruptcies in the late 19th century eventually allowed the railroad to be purchased as it was taken over by the Grand Trunk Railway in 1898 (that same year when the CV emerged from bankruptcy it was renamed as the Central Vermont Railway), a system that became part of the Canadian National Railway in 1923.

Overall, the CV operated a system that stretched from New London, Connecticut to Brattleboro, Vermont where it used Boston & Maine trackage rights to Windsor, New Hampshire.

Connecticut was an earlier pioneer of railroad technology, boasting its first in 1839.  New England was a staunch proponent of the iron horse with many states launching their first around this time.

Despite its small size, Connecticut featured numerous railroads by the mid-19th century.  Most wound up as part of the expansive New York, New Haven & Hartford Railroad.


Today, most of the abandoned rail lines you can explore are former New Haven lines albeit most were originally built by the one of the above-mentioned railroads.

While a great deal of the old New Haven is now gone across Connecticut, one particularly noteworthy route since removed is the old Boston & New York Air-Line/New York & New England from Middletown through southern Massachusetts.

This line was provide the NY&NH with an inside gateway between Boston and New Haven via central Connecticut.  Unfortunately, it was slower than the Shore Line main line with stiffer grades and sharper curves resulting in its abandonment in sections over the years.

From there the CV continued on northward to Cantic, Quebec and a connection with the CN.

As for the CV's operations in Connecticut, its main line between Stafford (MP 71.4) and New London (MP 121.1) covered exactly 49.7 miles according to the railroad's timetable. The railroad also operated two branches reaching Palmertown and Fitchville. 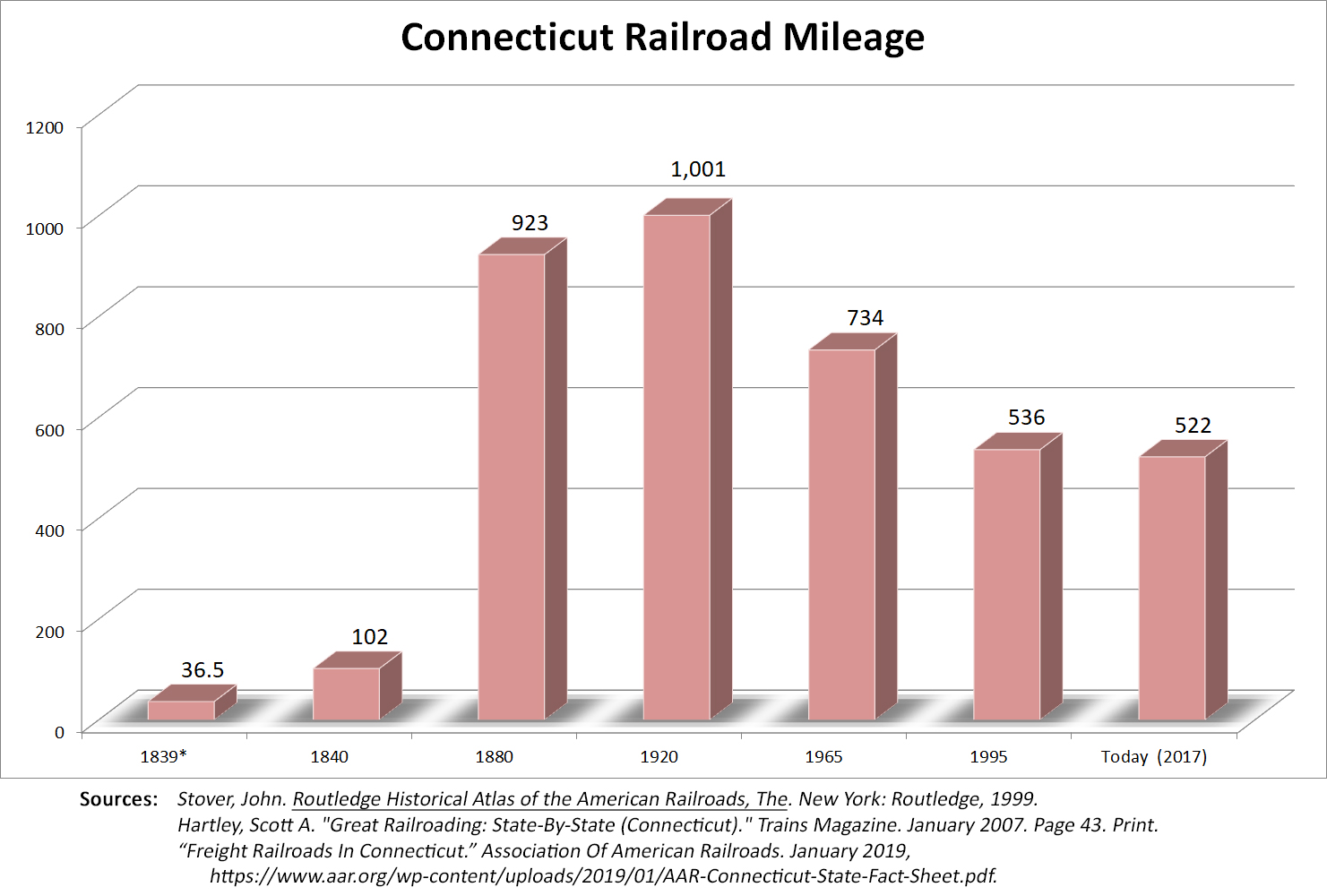 * The iron horse found its way to Connecticut in 1839 when the Hartford & New Haven (initially chartered in 1833) opened its first 36.5 miles between its namesake cities in 1839.  The system went on to form part of the modern New York, New Haven & Hartford (New Haven).

At one time, when the Northeast was a bustling heavy industrial center, Connecticut boasted over 1,000 mile of trackage.

Today, that has been cut to just a third of the state's peak mileage at just over 330 miles. 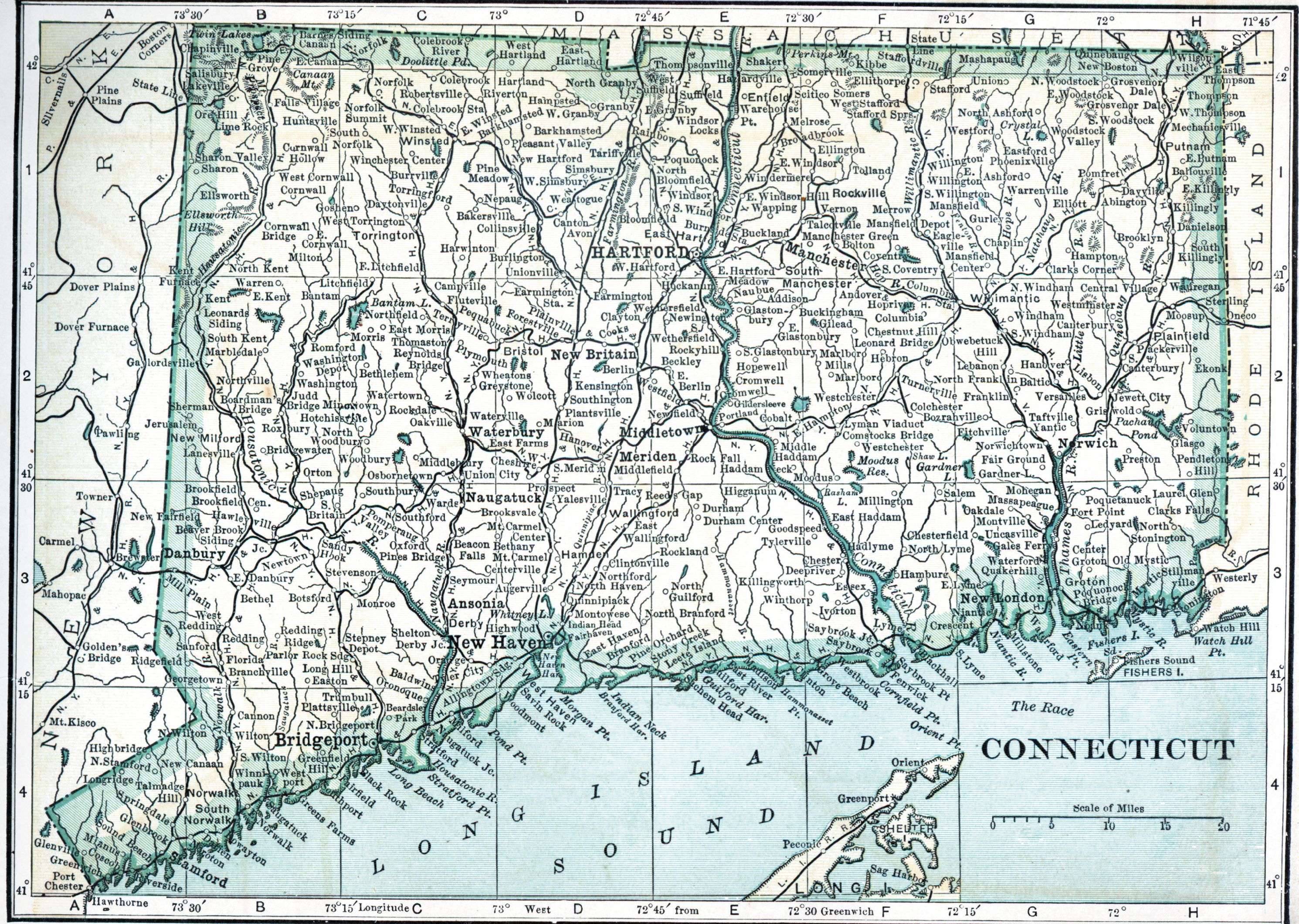 A Connecticut railroad map from 1909, showing all of the state's lines in service at that time. Note the heavy concentration of New Haven routes. Author's collection.

Interestingly, while the New Haven disappeared into the Penn Central debacle, and later Conrail, much of its trackage in Connecticut remains and its importance is growing as passenger and commuter trains are becoming an ever-more attractive transportation option.

Today, the original New Haven main line is part of Amtrak's Northeast Corridor between Boston and Washington, D.C. For a more in-depth look at Connecticut's rail mileage over the years please refer to the table below, which highlights the state's network from its earliest days through the present.

As for passenger and commuter trains outside of Amtrak, this has fallen mostly onto the shoulders of the State of Connecticut, which is another one of the top states in promoting the service.

Its services include that of Metro-North (which honors its rail heritage and has painted several locomotives in a New Haven inspired livery) and Shore Line East (which parallels I-95 and gives commuters another option over driving).

Aside from the state's passenger and freight rail network it also is home to several railroad museums.