The Lackawanna Cutoff, also known as the New Jersey Cutoff (as most of the route lies in New Jersey), was one of two grand realignment projects carried out by the Delaware, Lackawanna & Western in the very early 20th century.

Working from east to west the Cutoff was built between 1908 and 1911 at a cost of $11 million. While this route was only about 28.5 miles in length it shaved more than 11 miles of redundant trackage, shed many sharp curves, and reduced the ruling grade by more than half.

The cutoff only remained in use for about 73 years before it was abandoned and removed by then owner Conrail in 1984.

Since Conrail's hasty decision there have been many attempts to reactive the cutoff.  There are few other rail corridors in such rugged terrain that offer such a superb right-of-way with few grades or curves.

It is currently owned by NJ Transit with eventual plans to restore the route to operation as a high speed commuter line.  In 2022 those plans are much closer to becoming reality when the commuter system announced plans in April to overhaul Roseville Tunnel for $32.5 million. 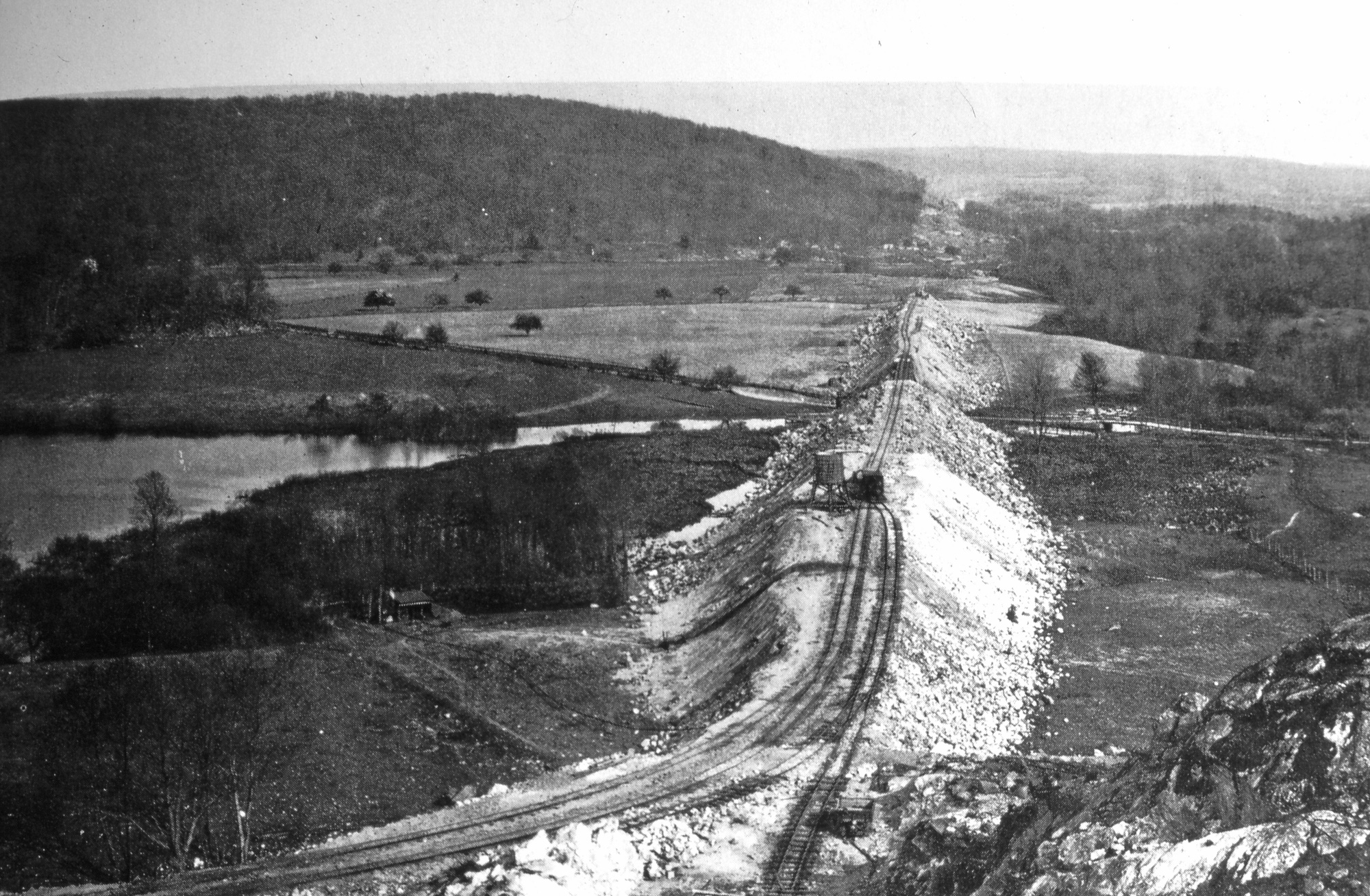 Constructing the Lackawanna Cutoff, seen here in an eastward view of Wharton Fill from the top of Roseville Tunnel in May of 1909.

The Delaware, Lackawanna & Western has its beginnings in 1851 when on October 20th of that year the Lackawanna & Western Railroad operated its first scheduled train between Scranton and Great Bend, Pennsylvania (originally the L&W was known as the Liggetts Gap Railroad until it changed its name in 1851).

The Lackawanna gained its name in March of 1853 when it merged with the Delaware & Cobbs Gap Railroad (which constructed a line south of Scranton) to form the Delaware, Lackawanna and Western Railroad. 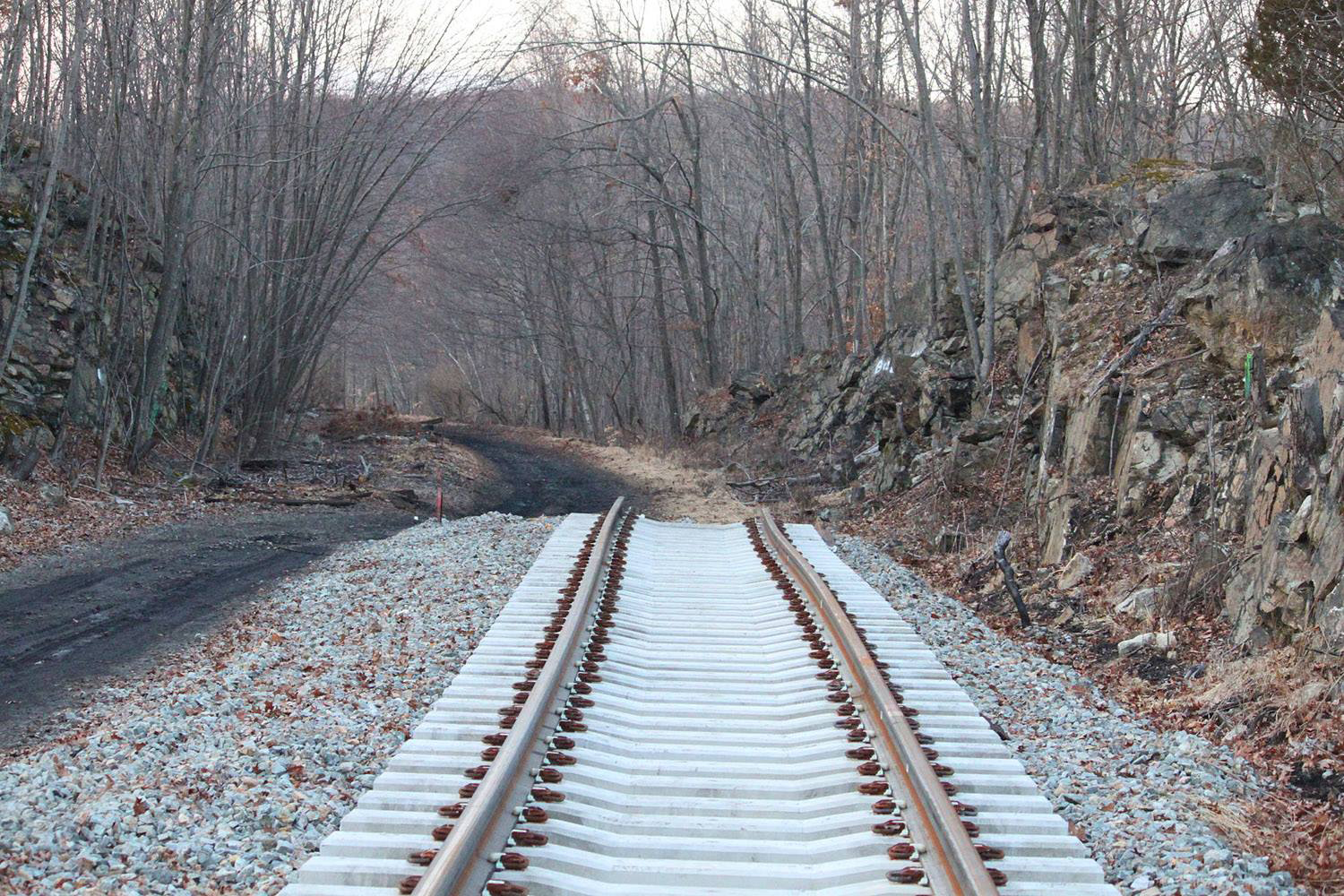 The current end-of-track at Lake Lackawanna, located about 4 1/4-miles west of Port Morris. The state of New Jersey is rebuilding the Lackawanna Cutoff to serve New York City-bound commuters. The line will be operated by NJ Transit.

With the ownership of these lines the DL&W's main line was basically complete and, in all, stretched from Buffalo, New York to Hoboken, New Jersey just across the Hudson River from downtown New York City (Manhattan).

The idea of the DL&W leveling and straightening its main line to Buffalo began around 1900 and was the result of its president William Haynes Truesdale, who not only wanted the railroad to be more competitive in the New York City-Buffalo market but also wished to alleviate a curving and meandering route through much of western New Jersey and eastern/northeastern Pennsylvania that was slow, steep, and circuitous. 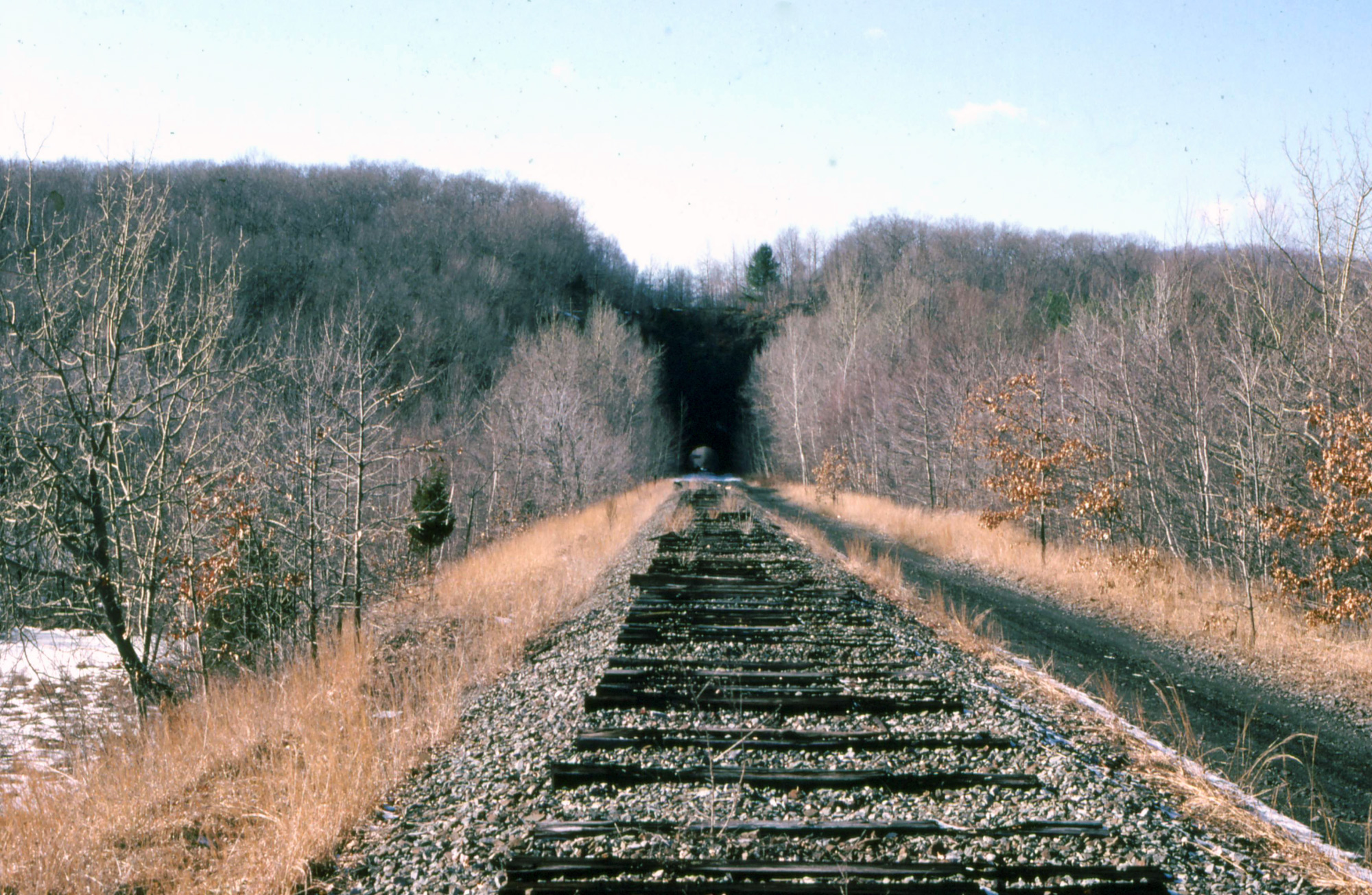 Following the abandonment of the Lackawanna Cutoff, looking towards Roseville Tunnel in the fall of 1989 about a decade after Conrail stopped using the corridor.

The new alignment, which replaced the "Old Road" (which was the result of hopeful merger with the Central Railroad of New Jersey that never happened), broke away from the main line initially heading north, then west.

The DL&W spared no expense in straightening and leveling its main line using massive fills and deep cuts to keep the maximum ruling grade at an astounding 0.6%! Perhaps the Cutoff's most impressive feature is its concrete bridges, which are arched designs built of concrete.

Most notable of these bridges is Paulinskill Viaduct, one of the largest in the world at the time (before Tunkhannock Viaduct was constructed). The bridge spans Paulins Kill in New Jersey and is more than 1,000 feet long and 100 feet high. 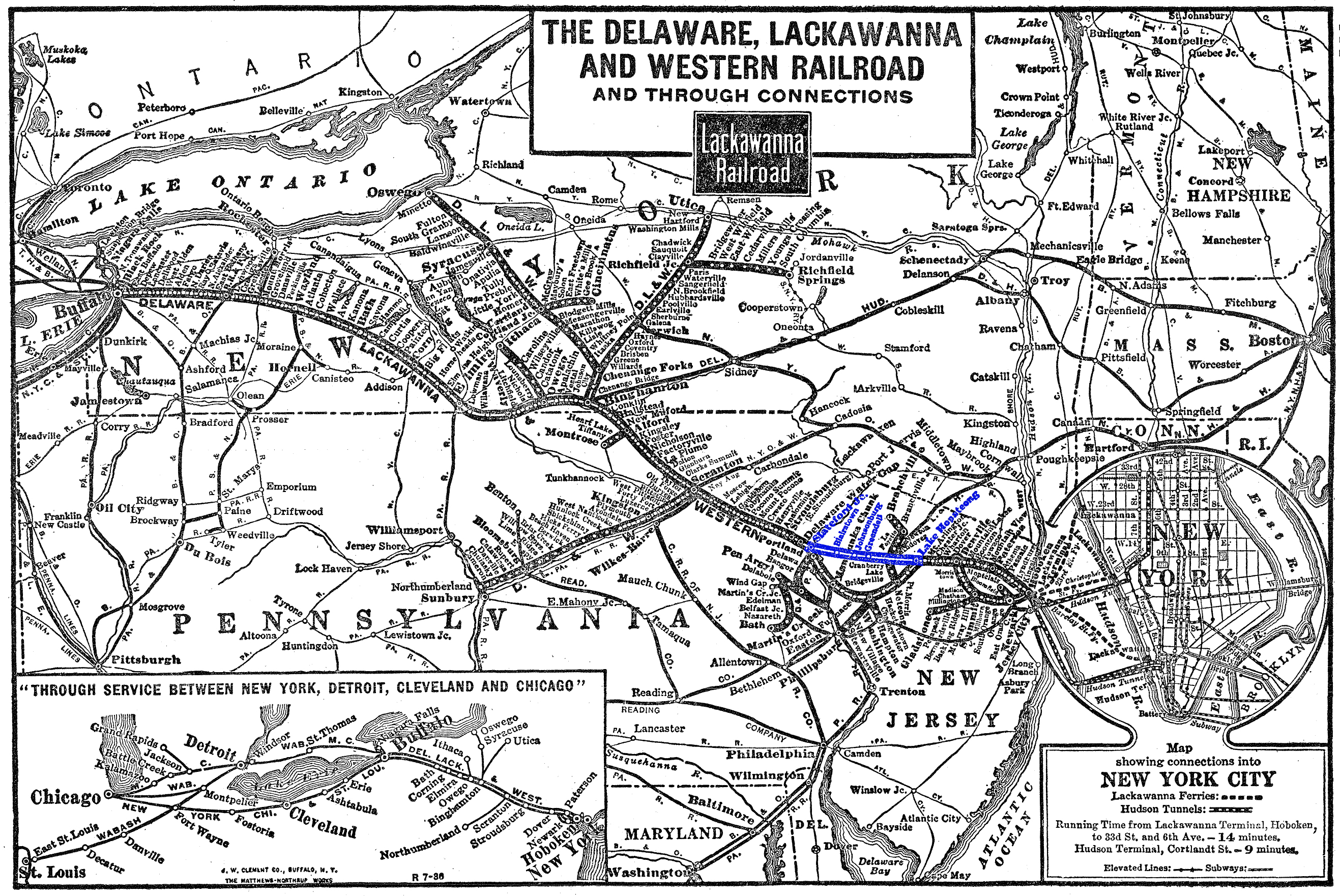 A map of the Lackawanna Cutoff (highlighted in blue, including stations) from Delaware, Lackawanna & Western's official, 1930 system map. Author's collection.

Another interesting aspect of the cutoff's design is the use of concrete. Due to the material being readily available, as the railroad served many plants along its lines (the DL&W built many structures from concrete, including stations and interlocking towers), it was ultimately chosen as the material of choice to build both the Cutoff as well as the later Nicholson-Hallstead Cutoff.

The DL&W built almost everything from concrete, which not only included bridges and tunnels but also stations, interlocking towers, and  numerous other small structures (virtually everything along the Lackawanna Cutoff was built from concrete).

The cutoff ultimately opened for business, officially, on December 24, 1911 at a cost of more than $11 million. With no grade crossings the 28.5-mile double-tracked cutoff could feature speeds of 70 mph and its straight, virtually level grade greatly reduced operating times despite its massive cost.

The Cutoff remained in use through the DL&W and Erie Lackawanna eras. Passenger service on the line ended in 1971 and most of the remaining freight trains had been transferred to the former Erie main line after the EL merger.

By the time Conrail assumed control of the route in the spring of 1976 virtually no online traffic remained and the railroad made plans to abandon the route, despite its level grade. In 1984 the rails were pulled although after an effort to preserve the right-of-way for future commuter rail use in 1989 saved it from an uncertain future.

Since that time, slowly both Pennsylvania and New Jersey have worked to complete the necessary paperwork to begin reconstruction of the route. As of 2013 the first 7.3 miles between Andover and Port Morris Junction, New Jersey. 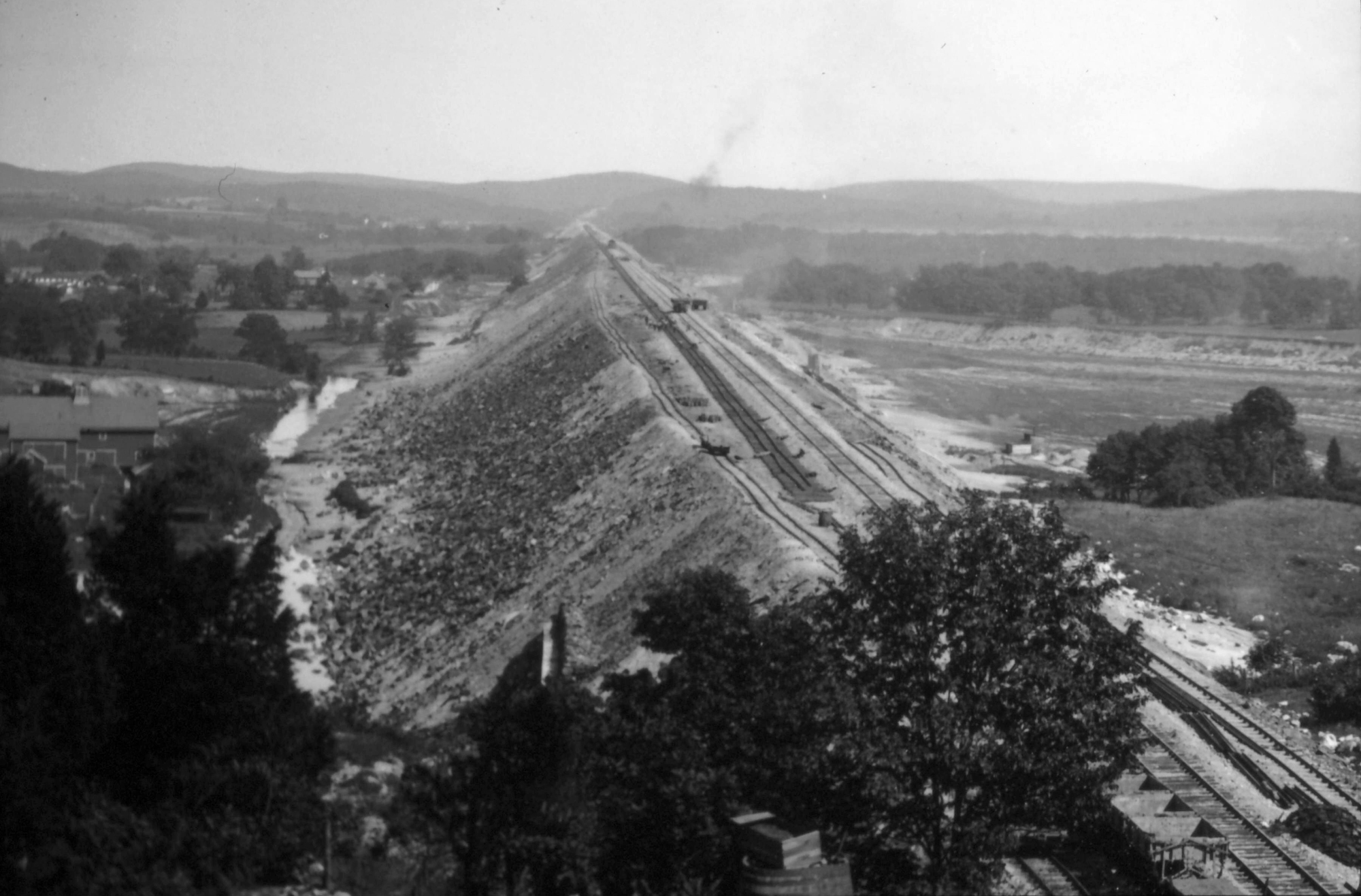 Seen here is the massive Pequest Fill under construction, near Tranquility, New Jersey in the summer of 1911.

It appears the cutoff's restoration has again gained steam following several more years of delays.  In an announcement made public in April, 2022 NJ Transit says it plans to $32.5 million to overhaul and repair the 1,024-foot Roseville Tunnel between Port Morris and Andover.

The project is part of a larger effort for NJ Transit and Amtrak to finally expand passenger service directly to Scranton, Pennsylvania.

To do so, the Lackawanna Cutoff (Port Morris - Slateford Junction, Pennsylvania) must be restored, which can then utilize short line Delaware-Lackawanna Railroad's trackage (ex-Lackawanna) into Scranton.

This is the closest the famous cutoff has been yet to finally seeing trains again after nearly 40 years.  It appears with the tunnel's restoration it will finally become reality.