Central Station, also sometimes referred to as the Chicago Terminal, was the primary hub of the Illinois Central. However, it was not the only railroad to use the facility as others, notably the New York Central, also used the terminal.

Interestingly, Central was the busiest station in Chicago in terms of train movements despite the fact that only a handful of railroads actually used the building.

Additionally, it was not the first station used by the IC whose much smaller Illinois Central Depot, located along Randolph Street to the north, dated back to the mid-19th century.

The new terminal was, visually, incredibly stunning and of the six large railroad stations to serve Chicago, arguably the most beautiful.

Sadly, when Amtrak was created in 1971 it looked to consolidate all of the city's terminals and Central Station was one that would not survive to serve in another capacity. 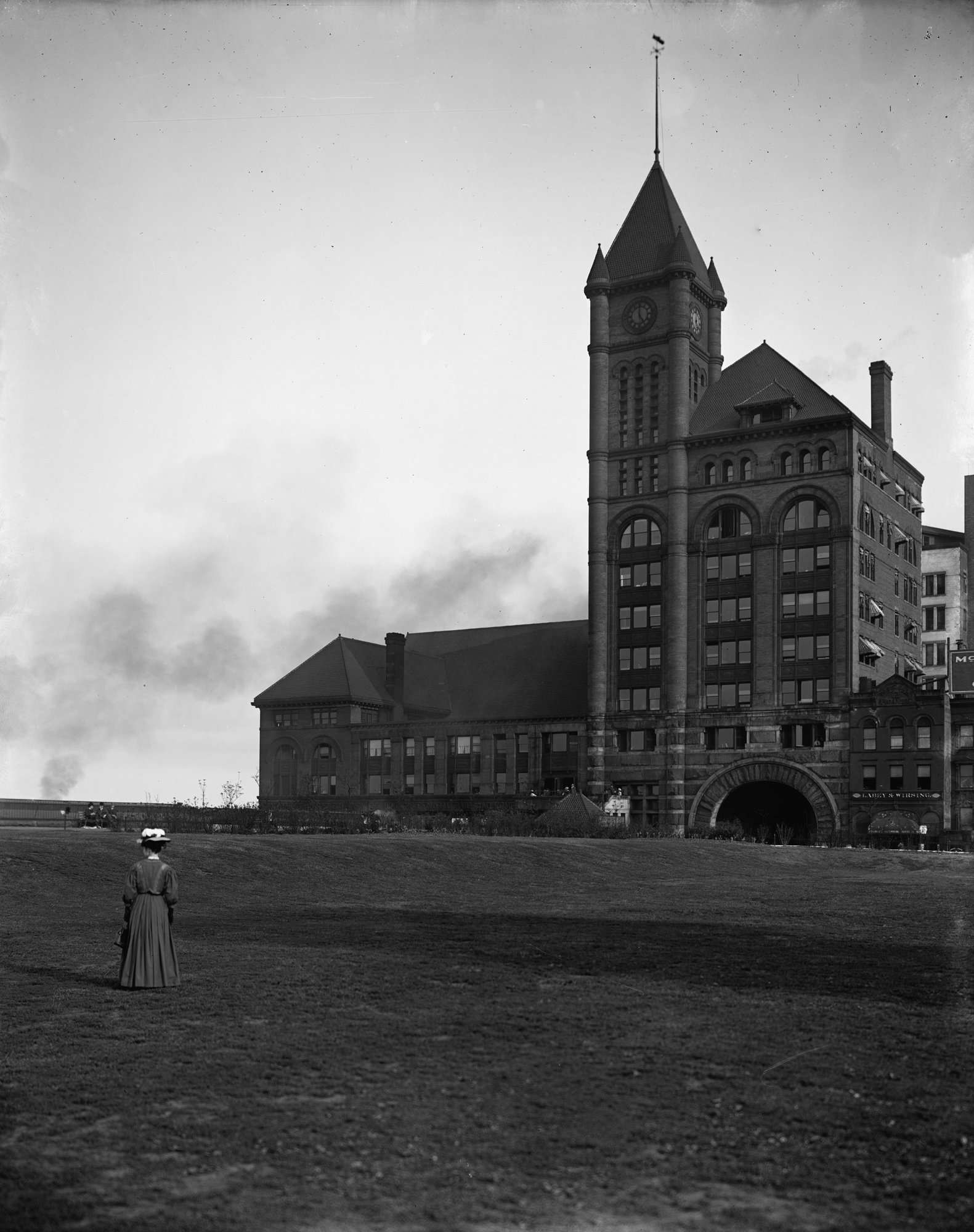 Central Station as it appeared around the turn of the 20th century. Photo by the Detroit Publishing Company.

Central Station was the Illinois Central's attempt to replace an aging station that was simply outdated and could not handle the increased capacity demanded of it.

Known as the Illinois Central Depot it was a stub-ended design that featured about a half-dozen staging tracks and was located in the heart of downtown Chicago.

The new terminal would be located just to the south, along the southwestern corner of Roosevelt Road and Michigan Avenue (and just two blocks east of Dearborn Station).

Construction of the Central Station began in the early 1890s and it would be the third-oldest of Chicago's six grand passenger terminals.

A History Of The Illinois Central, "Main Line Of Mid-America"

The Illinois Central hired architect Bradford Gilbert of New York to design the new station, which the railroad wanted to also include their central offices. As such, Gilbert planned a very tall structure, topping out at nine stories once it was completed. 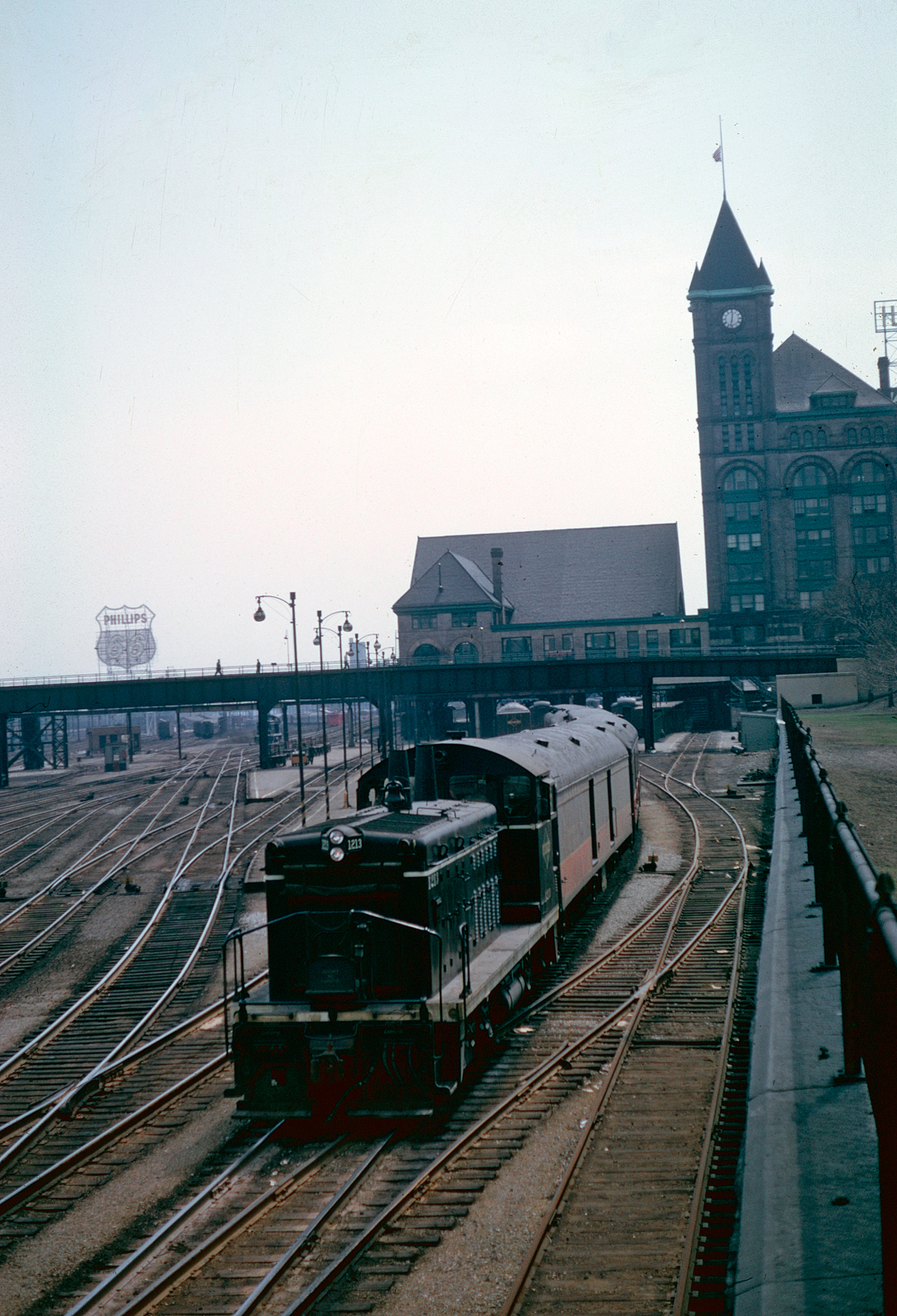 He gave the terminal a very compact design, somewhat resembling an office building, although it was offset but a beautiful 225-foot clock tower (which actually reached 13 stories). Additionally, the architect designed the station in the Romanesque style using red brick and local sandstone.

As such, with its arched windows, rounded support columns, red-tile pitched roof, and spiral peaks the building looked very much like a Medieval Europe castle one might see in ancient France, Spain, or England. 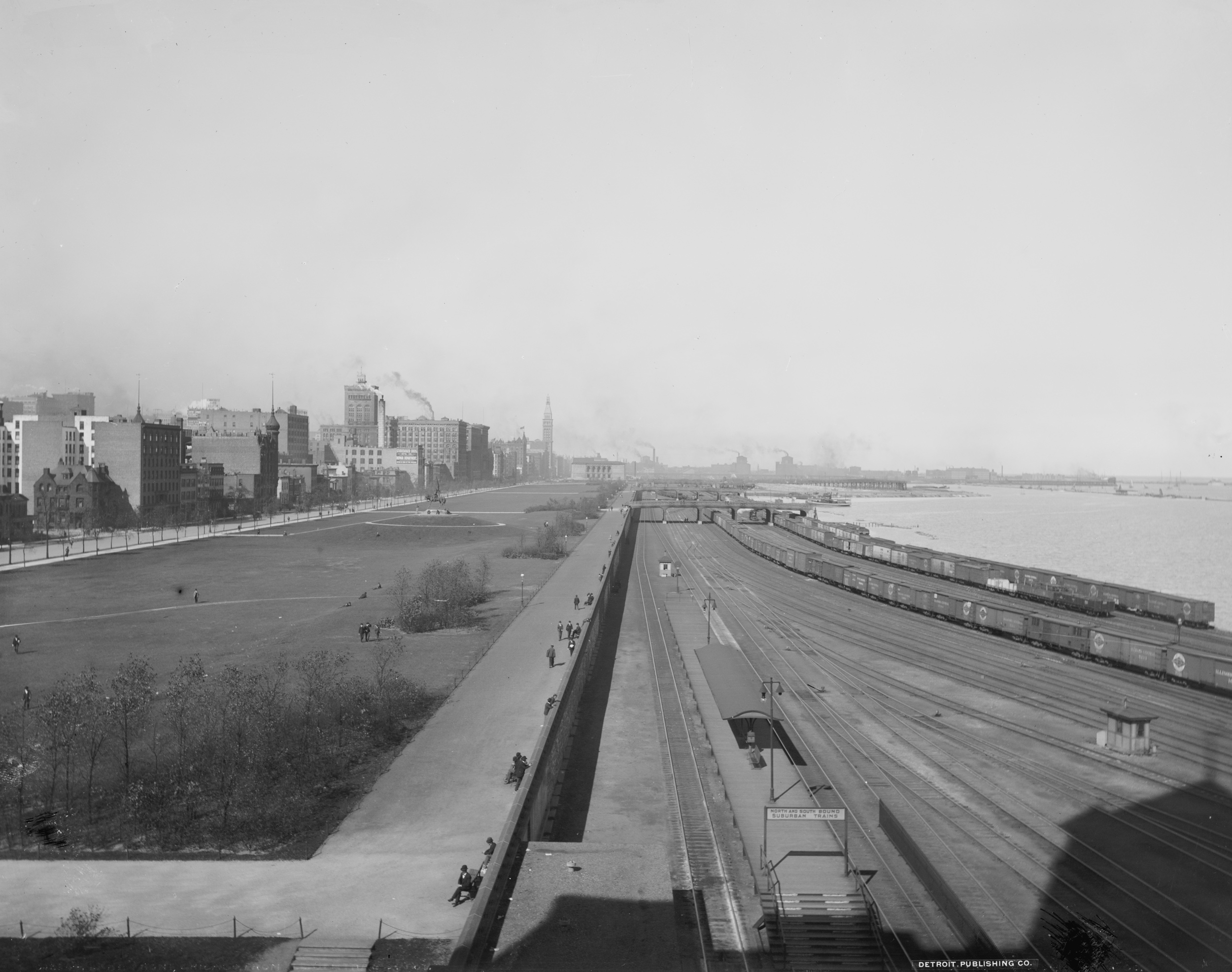 Looking north from Central Station circa 1901; Lake Michigan can be seen on the right. Photo by the Detroit Publishing Company.

Central Station officially opened to the public on April 17, 1893 just in time for the World's Columbian Exposition ongoing later that year.

The terminal featured a run-through design so trains did not have to back in and out of the station, which passed through the building's massive train shed (the world's largest at the time) measuring 610 feet long by 140 feet wide.

Passengers were treated to a magnificent three-story waiting room in the new station that constructed mostly of marble and included an outdoor balcony where one could look directly over Lake Michigan (at the time the station and tracks lay right next to the waterfront).

The large waiting room was certainly needed during the terminal's heyday of operations, which occurred from roughly the time it opened through the 1920s (and again briefly during World War II). 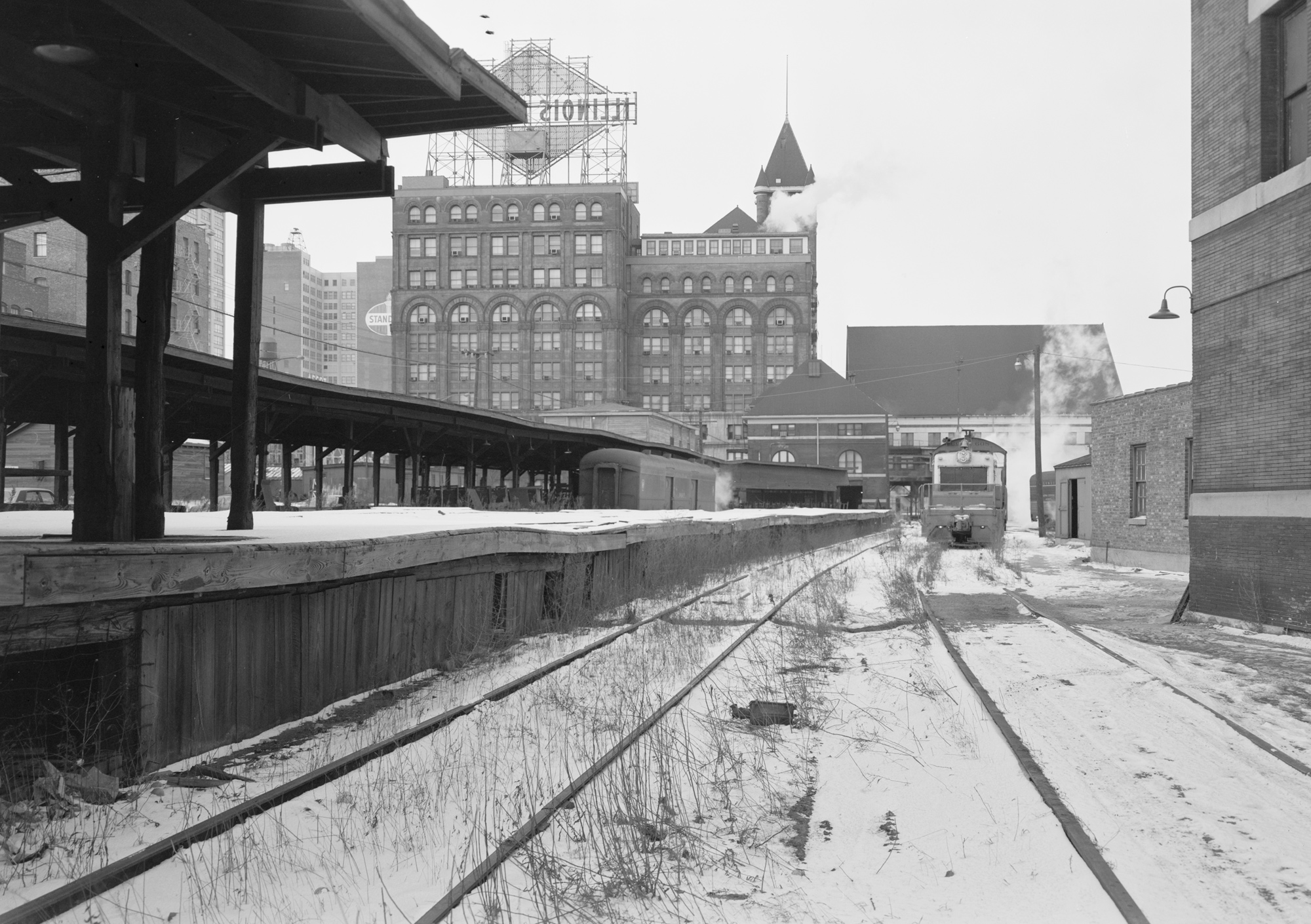 Another angle of the southern façade during the 1960s.

After the station opened, the the Cleveland, Cincinnati, Chicago & St. Louis Railway (also known as the "Big Four") used the terminal until 1922 when it officially absorbed into the New York Central.

Other railroads to use Central Station included:

After the mid-1920s the Chicago, South Shore & South Bend Railroad also used the station for commuter service. Although one could not find quite the variety of paint schemes and trains at Central Station as at nearby Dearborn Station it nevertheless provided plenty to see.

For instance, all of Illinois Central's famous trains like the Panama Limited, City of New Orleans, City of Miami, Green Diamond, and numerous others used the terminal. Interestingly, as rail travel declined through the 1950s and 1960s the Illinois Central still dispatched between 10 and 20 trains per day. 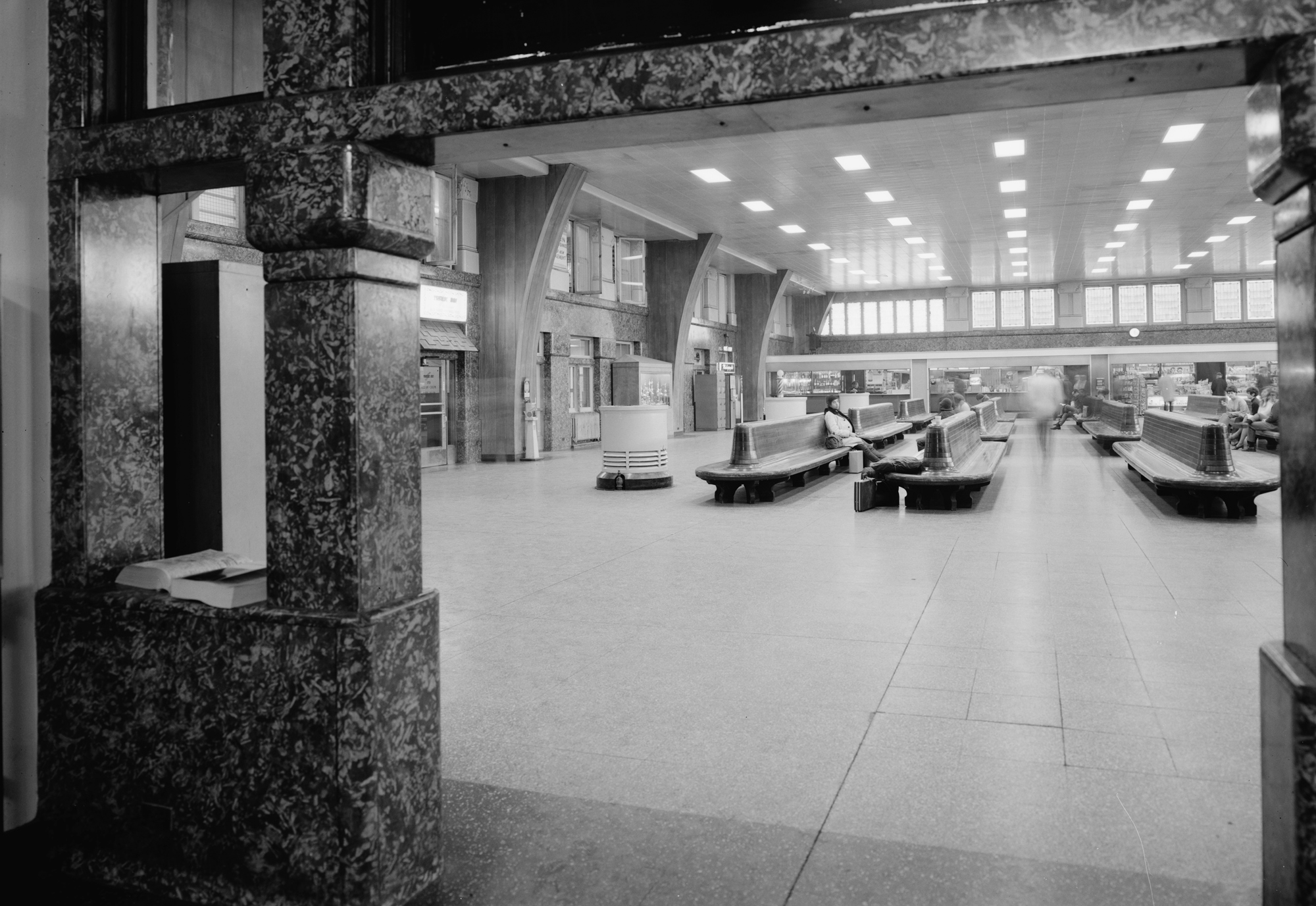 Inevitably, however, the station's better days were behind it. The Illinois Central, as owner, was the last railroad to use the facility when its Panama Limited departed the terminal on April 30, 1971.

The next day, Amtrak would take over and continued to use Central Station until March 6, 1972 when it finally transferred all remaining trains to Union Station.

Despite the loss of these trains the station continued to be used as the IC's main office complex until 1974 when it completed construction of a new building, known as Two Illinois Center at 233 North Michigan Avenue.

With this the station's fate was sealed. Before 1975 the entire building was razed as some residents considered it to be an eyesore.

Today, the area is still vacant and is an extension of Grant Park although the IC's original tracks (minus the large yard) still continue northward to Metra stations at Van Buren and Randolph streets.