The Cincinnati Union Terminal (or CUT) was one of the last great railroad stations built in this country and as Brian Solomon notes in his book, Railway Depots, Stations & Terminals, many authors consider it the country's greatest example of railroad architecture.

Prior to the terminal's construction, Cincinnati was home to several stations used by the many different Class I systems that passed through or terminated at the city.

To better streamline operations, in the 1920s discussions began about building a centralized terminal served by all of the city's railroads.

Today, CUT has been beautifully restored and is still served by Amtrak's tri-weekly Cardinal but functions in many more ways than just a train station as you can shop, watch movies, and even learn about the city's past within the building. 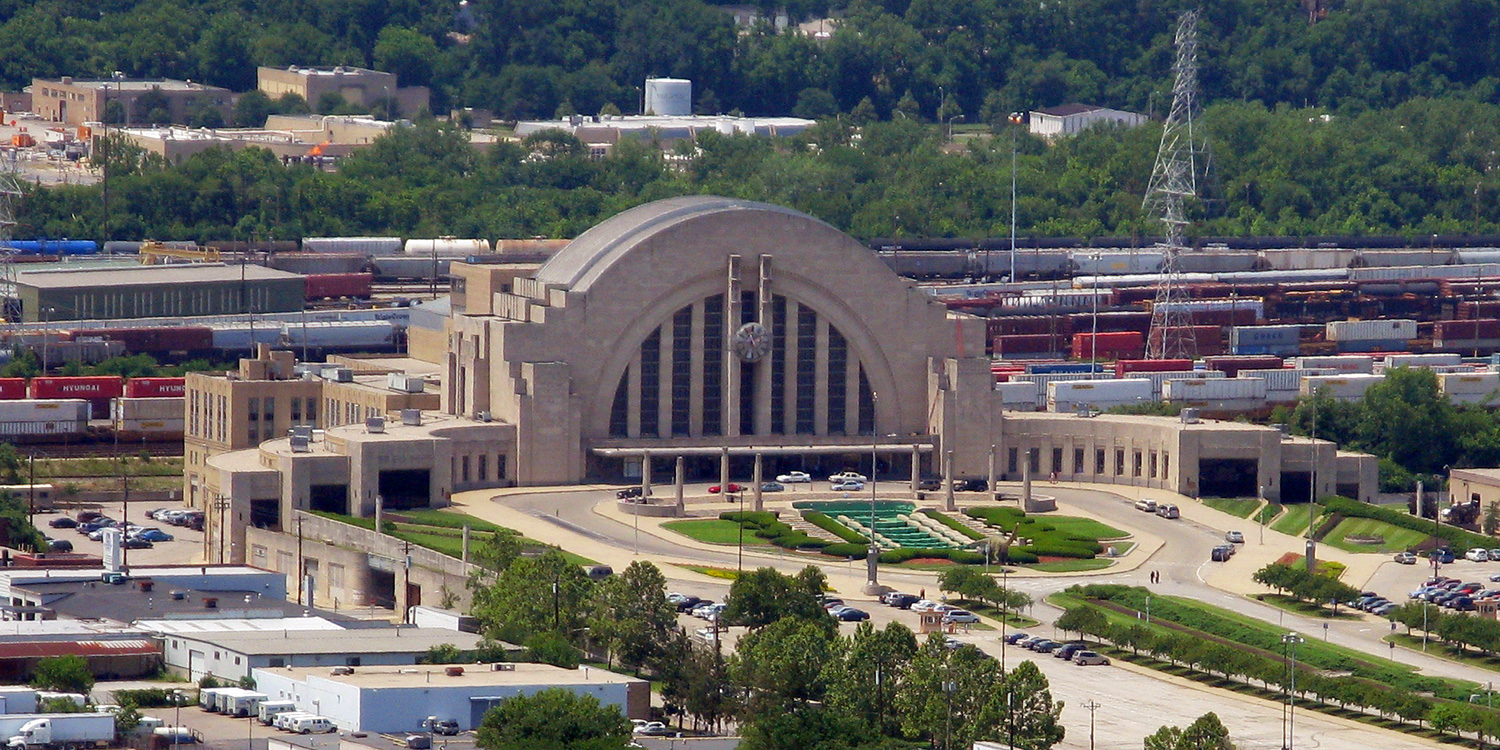 An aerial view of the present-day Cincinnati Union Terminal. Note its "through" design allowing trains to enter and leave the facility without having to back in or out, typical of "stub-end" layouts.

The city of Cincinnati, Ohio, situated along the Ohio River, is uniquely located in terms of our nation's railroad grid as the terminus of several Northeastern, Southeastern, and Midwestern railroads.

As Hans and April Halberstadt note in their book, The American Train Depot & Roundhouse, for years they used five different stations to serve travelers.

Despite efforts to centralize little progress was made for years and World War I only further delayed any potential plans.

His efforts paid off and in 1927 the Cincinnati Union Terminal Company was born to oversee construction of the new building.

Architects Fellheimer & Wagner of New York City were hired to design the station, a group which built Utica Union Station (Stem & Fellheimer) and New York Central's Buffalo Central Terminal at the around the same time (1920s). 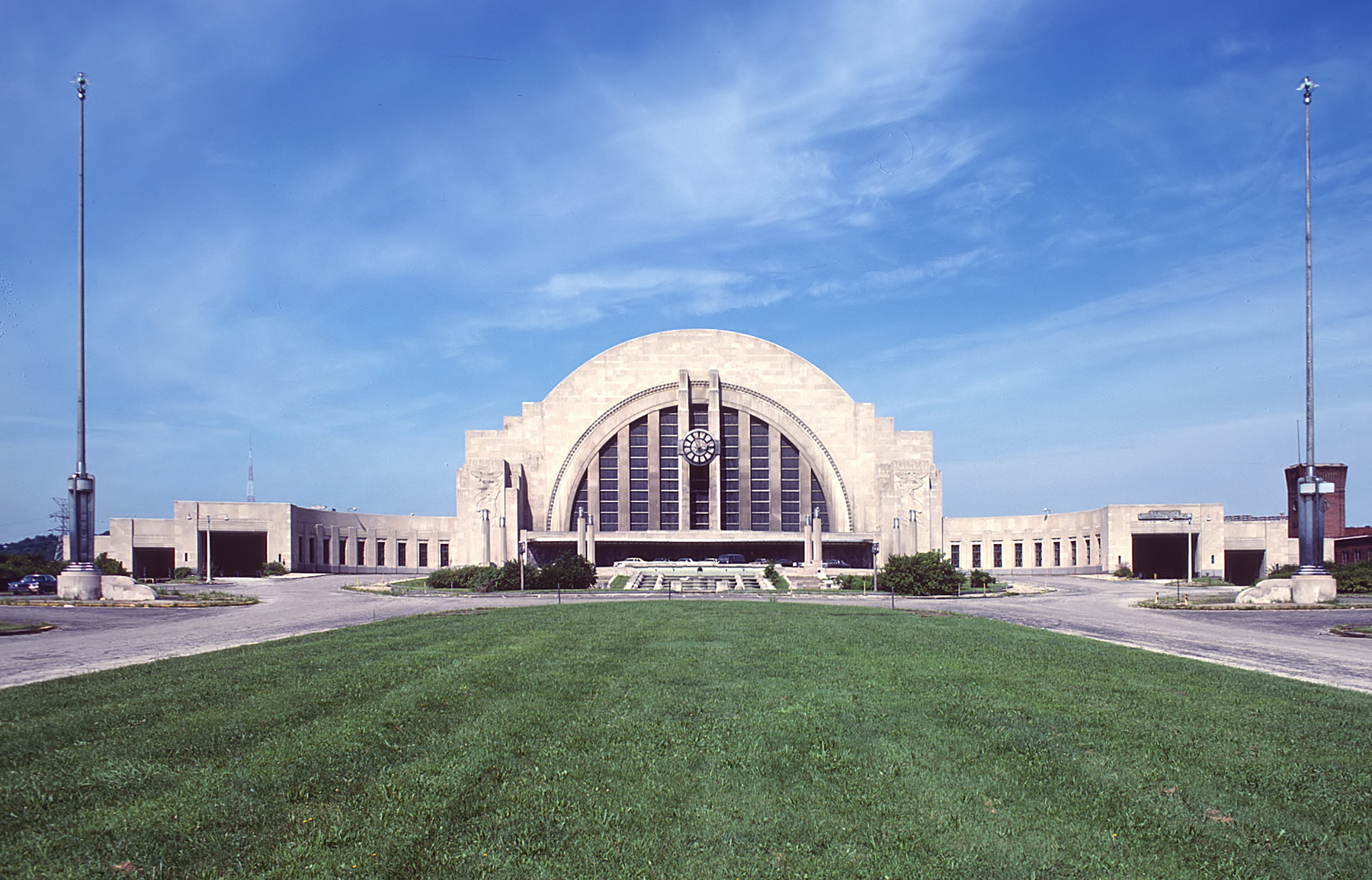 Designed in the Art Deco style, so common during those times, the building featured a beautiful arched façade with a large centered clock and fountain to greet visitors as they arrived.

The entire terminal took up an estimated 287 acres and was designed to handle 216 trains and 17,000 passengers daily.

To the say the least it was a breathtaking station; construction initially began in 1928 for track grading and preparation while the actual terminal was started in 1931.

It officially opened to the public on March 31, 1933 having cost $41.5 million.  Unfortunately, while this building was stunning in appearance it was built far too late to ever see its full potential realized.

By the time Cincinnati Union Terminal opened, the United States was in the midst of the worst depression of its history. Additionally, in rail travel was waning as airplanes (later jet liners) and automobiles were increasing in popularity.

A brief upturn in traffic during World War II was of little solace as by war's end traffic began the long decline with which would never recover. 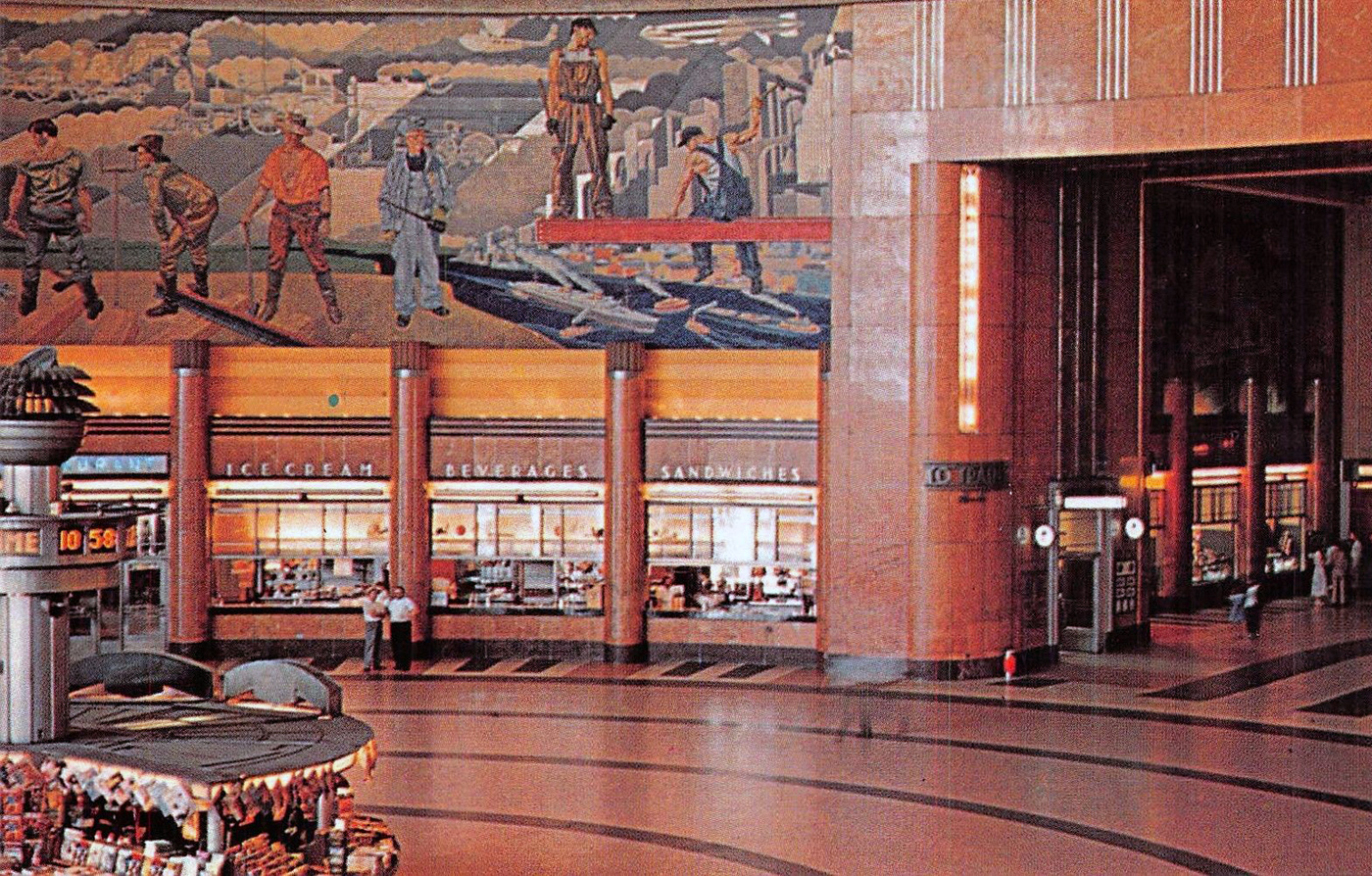 While CUT suffered from poor timing it was still an impressive structure built during an era when buildings were designed as utilitarian works of art.

In addition, one could still witness dozens of famous named trains calling there such as:


While the building's construction meant passengers had to pass through the concourse and walk down to track level for boarding (a number of large terminals enabled passengers to walk directly to their trains, unless they were located underground like at Penn Station) it was also designed to efficiently handle vehicular traffic (an uncommon feature) with a wide, semi-circle drive located at the front entrance.

By the 1960s railroads were looking for a way out of the passenger market and in 1971 the National Railroad Passenger Corporation (or Amtrak) was signed into law by President Richard Nixon, which began operations on May 1st of that year.

Soon afterward the new passenger carrier reduced service to just two trains a day through Cincinnati and by the fall of 1972 abandoned the terminal all together with the last train pulling away on October 28th (that same year CUT was added to the National Register Of Historic Places).

Not long after the building's use as a passenger terminal ended it was in danger of being destroyed as the Southern Railway made plans to use the acreage for an expanded yard.

However, in the spring of 1973 the forward thinking Cincinnati City Council saved the building and designated it a historic landmark in 1977.

While the station's concourse was destroyed by the Southern the rest was saved. Of course, the present-day look required much work to update its appearance.

In 1975 the city purchased the terminal, by then showing its age after years of neglect and lack of maintenance.

Following preservation $20 million was spent renovating the building and it reopened to the public (amid much fanfare) on August 4, 1980 as the "Land Of Oz" project.

Unfortunately, the new shopping mall complex, which housed nearly 60 vendors (including shops, restaurants, a bowling alley, and skating rink), fell on hard times after the recession of the early 1980s and CUT again lay empty by the mid-1980s.

However, once again its fortunes turned when a levy was passed by Hamilton County voters during May of 1986 allowed for a second renovation (comprising a total of $11 million) and the terminal reopened once more in 1990.

This time the facility housed six museum organizations to honor the city's past and even saw Amtrak return on July 29, 1991 when its Cardinal (New York - Cincinnati - Chicago) added the terminal to its timetable.

The train continues to stop at CUT today.  Presently Cincinnati Union Terminal is a major tourist attraction to the city (part of the Cincinnati Museum Center) thanks to the six organization located there:


In 2008 it celebrated its 75th anniversary amid a month-long celebration.  One of its highlights was recreating the atmosphere of the complex during its heyday of the World War II era when thousands of travelers and military personnel passed through its doors every day. 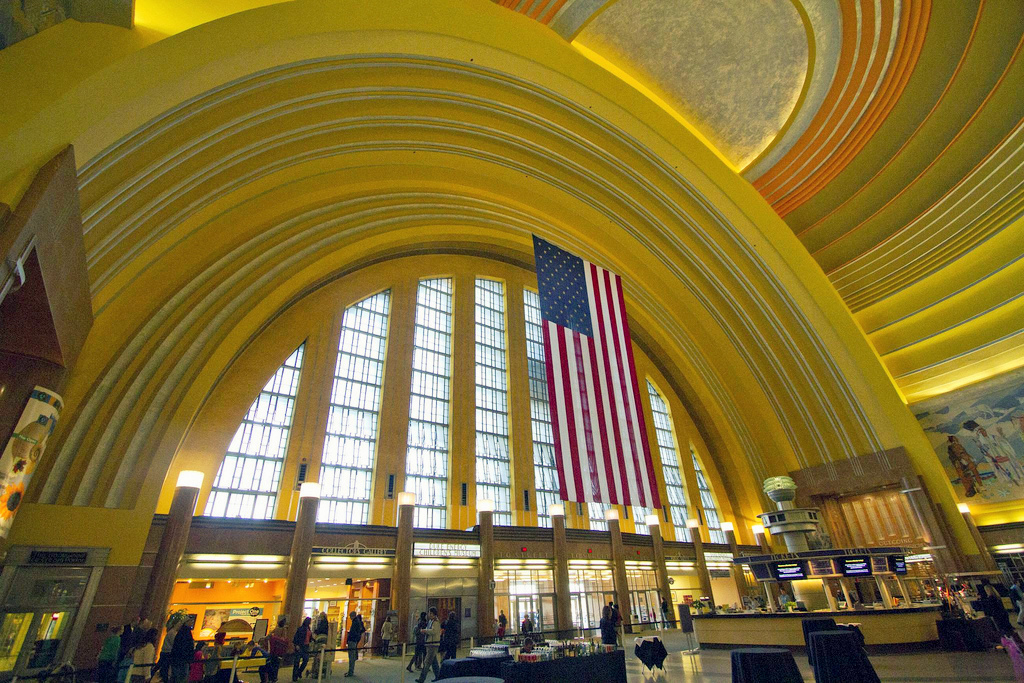 Another major event occurred in 2014 when CUT was again tapped for yet another restoration.  This time Hamilton County voters and the city's residents passed Issue 8, an increase of the county's sales tax of 0.25% over the next five years.

Among its other purposes is to provide the building with $170 million for rehabilitation, notably to insure the exterior is watertight as well as upgrading its aging electrical and plumping systems.

The future of Cincinnati Union Terminal appears brighter than ever and it is recognized by Amtrak as one of our country's "Great American Stations."

If you would like to learn more about Union Terminal please visit their website by clicking here regarding the latest events and happenings there.