The City of Los Angeles was just one train in the Union Pacific’s premier fleet of passenger trains. The railroad hosted an entire array of plush City trains including the City of Portland, City of Denver, City of Salina (the original M-10000), City of St. Louis, City of San Francisco, and City of Las Vegas.

The City of L.A. proved to be one of the West's most popular streamliners, even though it took two railroads for the train to complete its transcontinental journey between Chicago and Los Angeles.

The train was one of the first to follow the Union Pacific's successful M-10000 streamliner and featured incredible on-board accommodations.

As one of the only original Class I's still in operation today, Union Pacific works very hard to maintain, recognize, and honor the company's rich history.

Today, the City fleet can still be witnessed, in a manner of speaking, as Union Pacific's official business train is not only decorated in the Cities’ classic livery but also includes the original equipment, right down to the two E9A's and E9B's that power it! 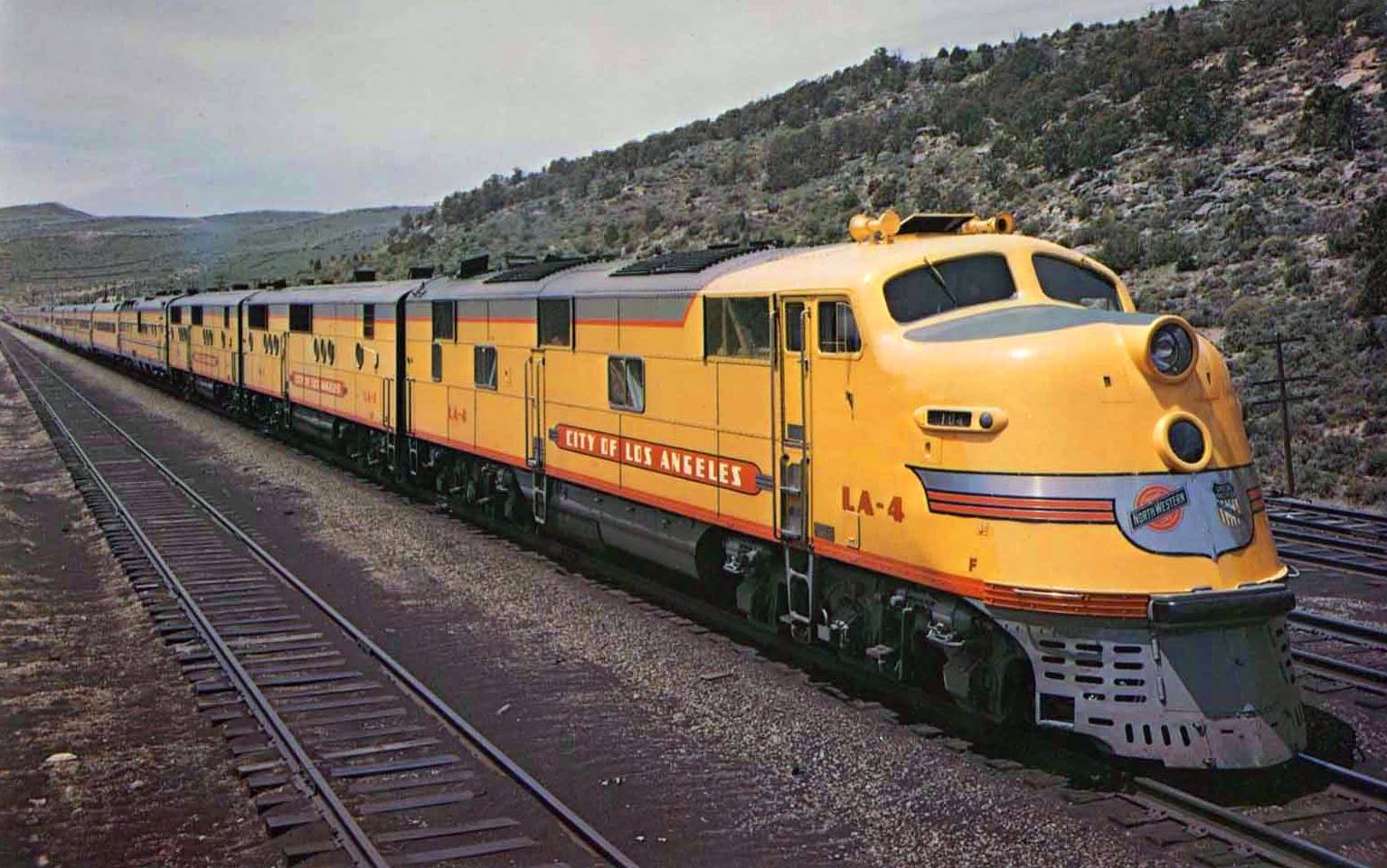 Union Pacific’s City fleet is credited with being the first lightweight streamlined passenger train to operate in the United States.

In 1934 the City of Salina, the first in the fleet, debuted as a three-car lightweight trainset that the Electro-Motive Corporation named the M-10000.

The Union Pacific was so impressed with the train, and the response it received from the public, that it purchased seven more sets and the City fleet was born!

The City of Los Angeles hit the rails in early May 1936, originally as the semi-articulated M-10002, and was soon upgraded in the early 1940s following a large order of streamlined equipment from Pullman-Standard and American Car & Foundry.

This particular order included some 145 cars in all and included the equipment operated by the Chicago & North Western.

With the streamliner craze just being to take hold and railroads scrambling to upgrade their fleets the Union Pacific was one of the lucky few to field a wide array of streamlined trains before war restrictions forbid the use of steel and aluminum for the private sector. 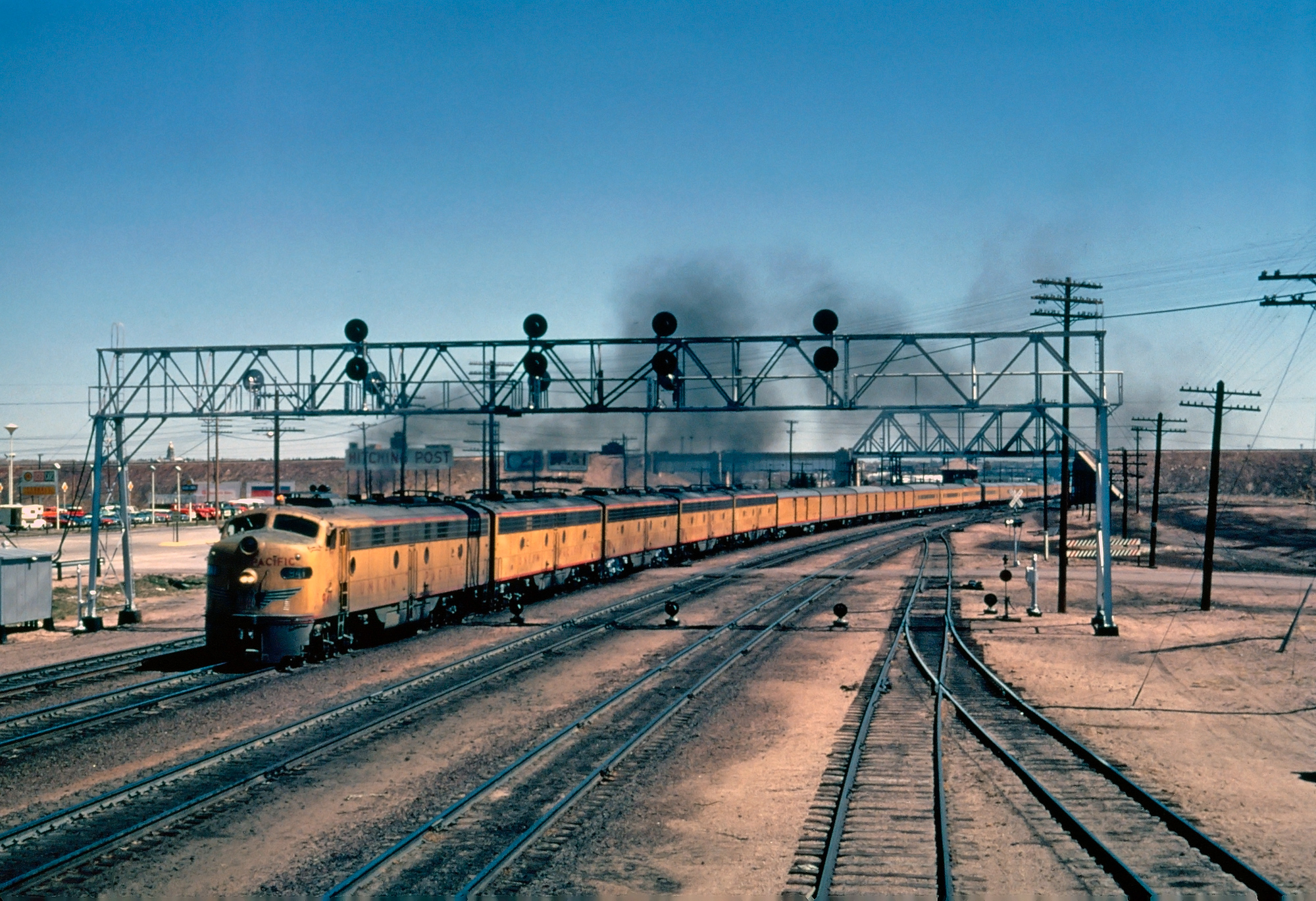 Union Pacific E8A #941 leads the combined "City Of Los Angeles"/"City Of San Francisco" westbound out of Cheyenne, Wyoming, circa 1968. This unit was later sold to the Rock Island (#661) in June, 1969. American-Rails.com collection.

When the City of L.A. was launched it originally featured streamlined diesel locomotives manufactured by the Electro-Motive Corporation (predecessor to GM's Electro-Motive Division) known as E2As with booster units (E2Bs). 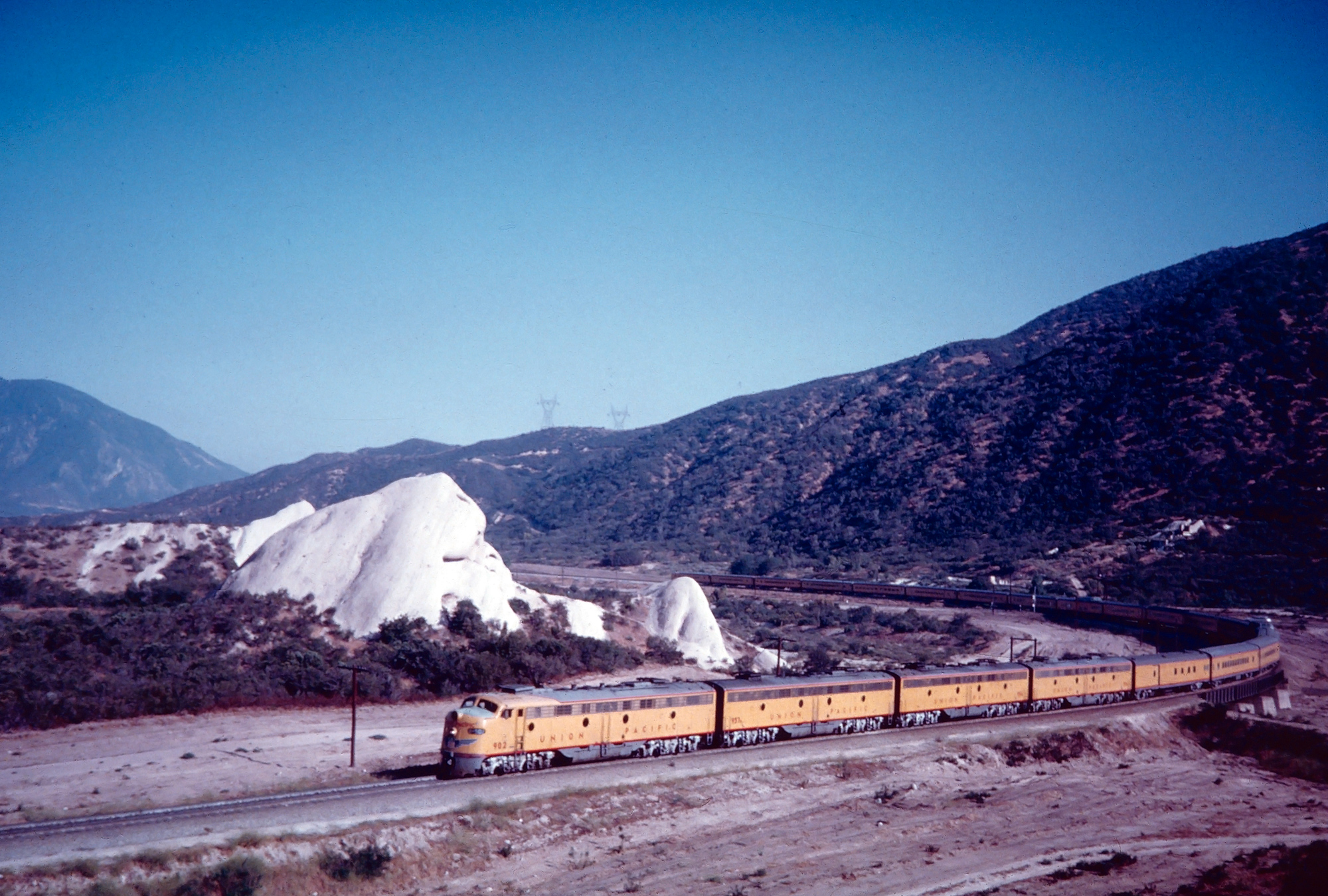 Union Pacific E9A #902 and a trio of "B" units climb Cajon Pass near Alray, California with the eastbound "City of Los Angeles" during the late 1950s. American-Rails.com collection.

Similar to the earlier E2 model the E6s featured a more slanted nose and increased horsepower.  The original City of L.A. consist included 14 cars featuring a club-dormitory, sleepers, coaches, an observation-lounge, and perhaps the train's marquee piece an articulated diner-coffee shop (the diner section could seat 64).

The City of L.A. was also the first streamliner to feature Pullman's new round-end observation, adding to the train's sleek look. 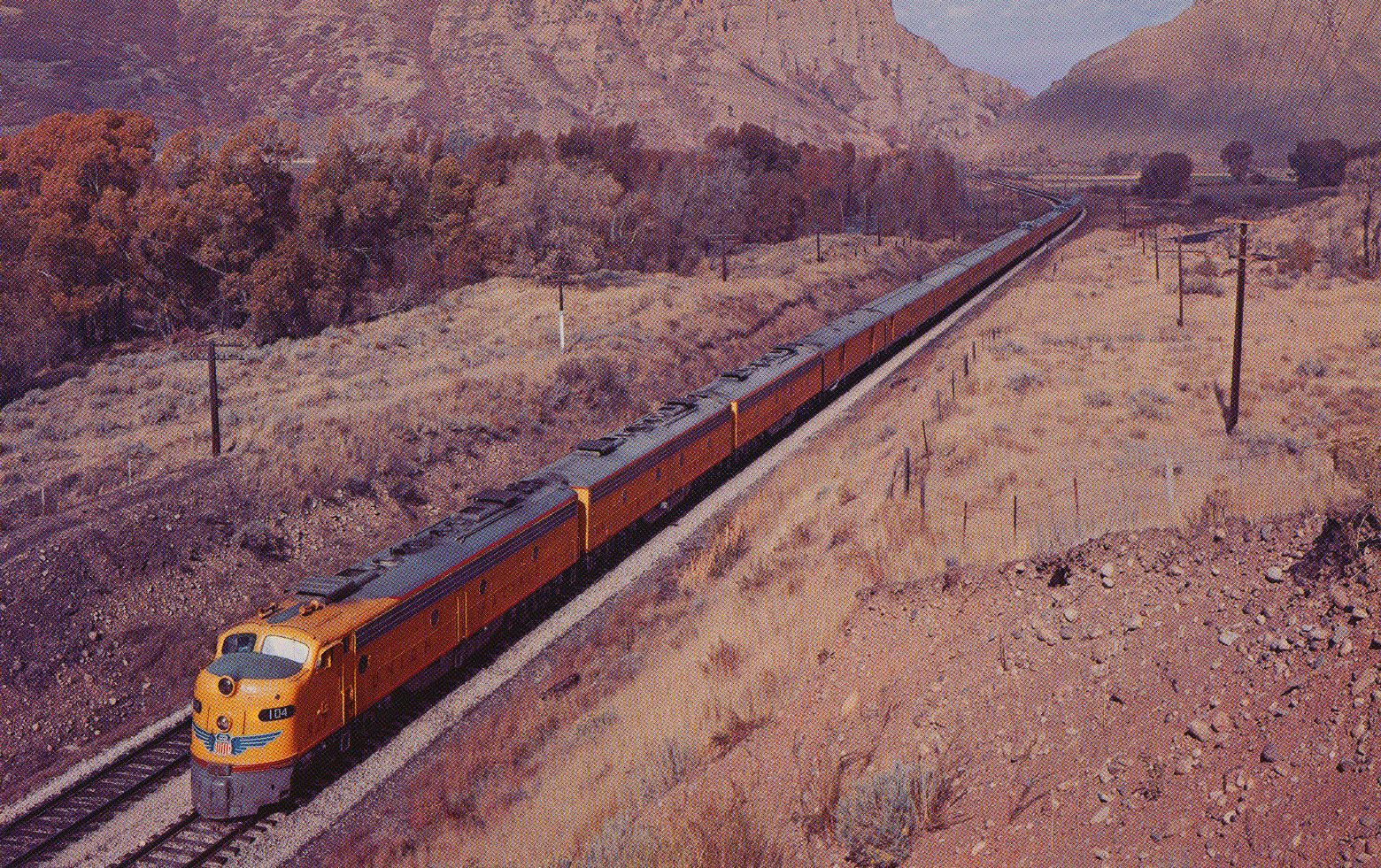 While the City of L.A. boasted a route connecting Los Angeles with the nation’s rail hub in Chicago it needed help to stretch that far east. While the Union Pacific's carried the during the central portion of the trip it relied on the Chicago & North Western between Chicago and Omaha, for the first twenty years or so of the train’s existence.

This setup lasted until 1955 when the UP, dissatisfied with the services C&NW was providing handed the train over to C&NW rival Milwaukee Road, a partnership that would last until the train’s end.

To keep the City of Los Angeles' livery consistent during both the Milwaukee Road's and C&NW's tenures operating the their locomotives were similarly painted in UP Armour Yellow and gray.

It was also during the 1950s that the City fleet received upgraded, lightweight equipment and what UP termed “Domeliners,” which were dome cars set up as diners, coaches, and even lounges.

The new equipment, as the original streamliners that had debuted in the mid-1930s, was also adorned in a striking livery of Armour Yellow and light gray with red trim, a paint scheme still in use today on the Union Pacific.

Overall the railroad purchased some 140 new cars including dome lounge-observations and dome diners. For power the railroad upgraded to EMD E8s and E9s, the final two E series models ever built.

The Domeliners proved to be highly successful for UP and along with its regal onboard services such as shower-baths and barber shops it is no wonder that so many famous Hollywood celebrities chose City trains for their travels.

Also, the Union Pacific was one of just a handful of railroads that continued to see strong ridership through the 1950s which no doubt was due to both its posh accommodations and fast transit times.  For more reading and history about the train please click here.

(The below City Of Los Angeles timetable is dated effective June of 1956.  Note that by this date UP had switched to the Milwaukee Road as its Chicago connection.) 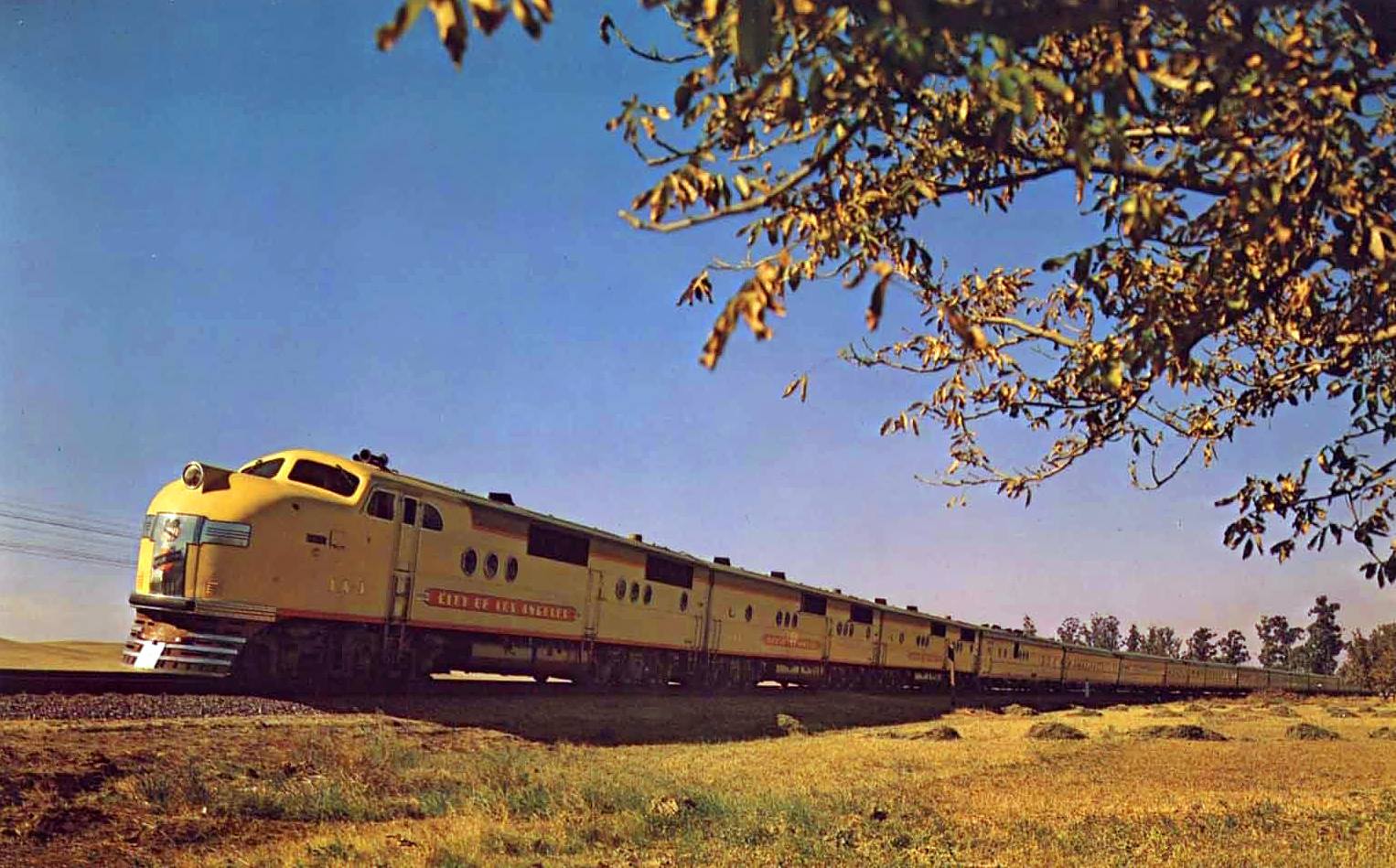 A Union Pacific publicity photo featuring the "City Of Los Angeles," led by E2A "LA-1" with E2B's "LA-2" and "LA-3" trailing, posed somewhere in California circa 1939.

Ridership was so high during the 1950s that the railroad still operated two westbounds (Trains #103 and #107) and eastbounds (Trains #104 and #108) daily. During this time the UP and C&NW/Milwaukee Road could make the run between Chicago and Los Angeles in about 40 hours carrying a very fast average train speed of nearly 57 mph.

There was also through sleeper service available on both the Pennsylvania and New York Central railroads to New York City via Chicago.  Through the end the City of Los Angeles, along with her sister City trains, remained a top-notch, all matching consist operation by Union Pacific.

While service remained at a high level this, however, did not secure the Los Angeles’ or other City trains’ futures. By the late 1960s the City of L.A. was down to just an eastbound and westbound run. By 1971 with the startup of Amtrak the entire City fleet was discontinued.