The Davenport Locomotive Works was a manufacturer of small switcher locomotives, similar to the Whitcomb Locomotive Works, whose earliest history dates to the first years of the 20th century.

During the steam era the company built a mixture of rod and geared locomotives, particularly tank models of the former, eventually transitioning over to diesel-electrics starting in the 1920s. Davenports became popular with some railroads and especially in the industrial marketplace due to their small size and relatively cheap costs.

Some of its largest diesels were constructed during the 1940s although it never seemed to find as much success as rival Whitcomb. Eventually, Davenport was purchased by the Canadian Locomotive Company and its plant was shut down in the 1950s.

Little switchers, like this 0-4-0 saddle tank type built for Koenig Coal & Supply Company, were Davenport's most successful line of locomotives.

The history of the Davenport Locomotive Works begins in 1901 with the founding of the W. W. Whitehead Company of Davenport, Iowa. A year later in 1902 the manufacturer was producing small, light duty steam locomotives that were marketed as a switcher design for use in all sorts of related applications.

Interestingly, while Davenport and the Whitcomb Locomotive Works would eventually come to compete in the diesel switcher market, for their first 25 years in the business this was not so much the case since the former built steam-powered models and the latter gasoline designs (later transitioning to diesels).

They were similar, however, in another way. During the World War I conflict both companies manufactured reliable and durable narrow-gauge locomotives for use in the French trench railways moving material and troops for the war effort.

Through the late 1920s Davenport's business was centered around saddle tank switchers such as tiny 0-4-0Ts and 0-6-0Ts (also known as "dinkies"), which became its most popular models during its early years in the business.

Buyers for these locomotives could be found in every imaginable industry outside of common-carrier railroads from mining companies (i.e. coal, copper, or ore) to sugar plantations and cement companies. 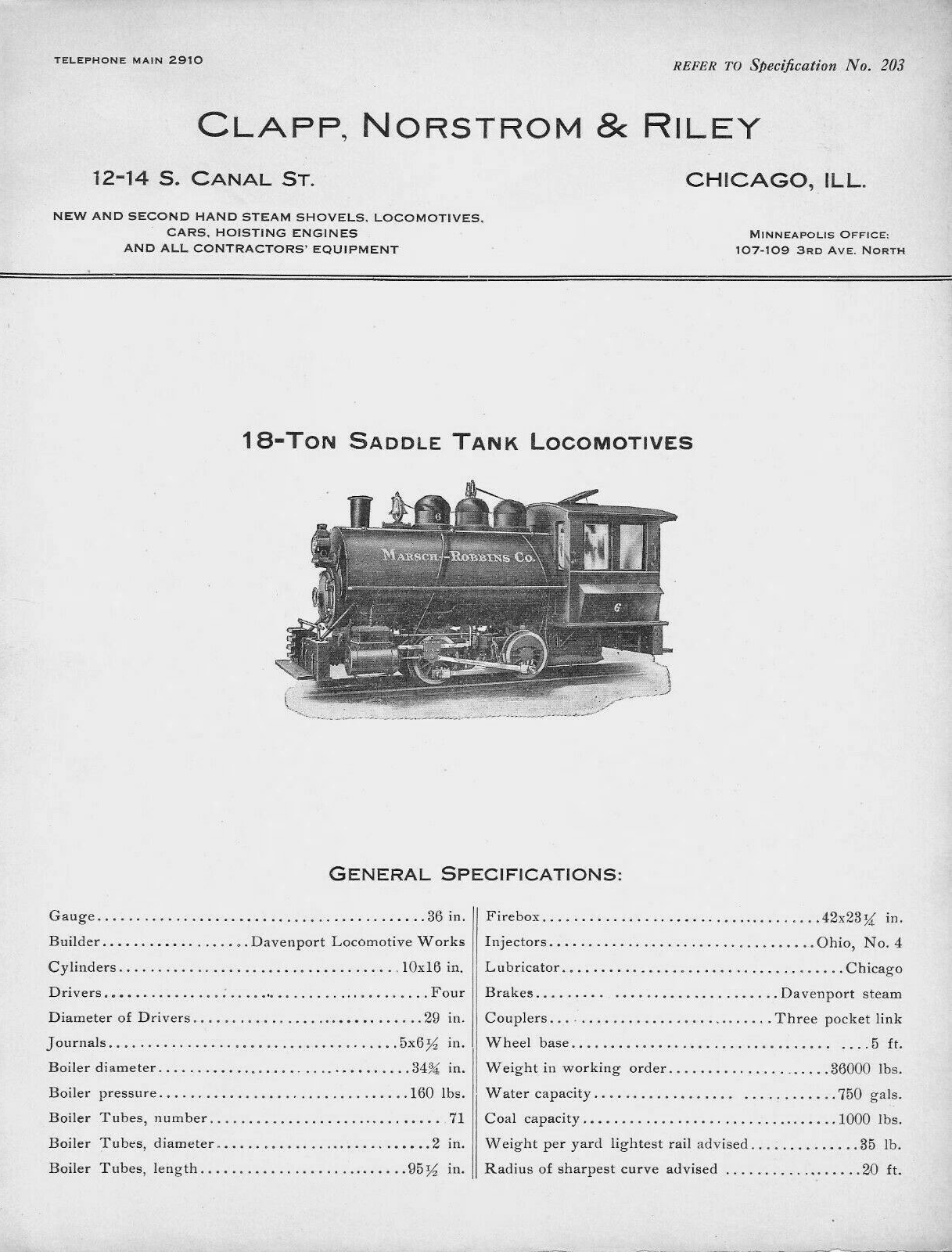 After 1910 the manufacturer began to branch out somewhat and produced slightly larger locomotives including 2-4-0s, 4-4-2 Atlantics, 2-6-0 Moguls, and even 2-6-2 Prairies.

While Whitcomb was not an initial competitor to Davenport others such as H.K. Porter certainly were, and had been in the business since just after the end of the Civil War. Since that time Porter became the leading manufacturer of light duty and small steam locomotives building thousands through World War II.

After a long decline after World War I Porter was acquired by Davenport in 1950. In 1933 the Davenport Locomotive Works was reorganized as the Davenport-Besler Corporation and had manufactured its first diesel switchers in 1927 for the Northern Illinois Coal Company of Indiana, a 30-ton design.

As the company began transitioning from steam to diesel interest for its locomotives grew among the general railroad industry.

While the advent of diesel-electrics in main line applications did not catch on until the 1939 introduction of Electro-Motive's FT, builders like Baldwin and the American Locomotive Company (Alco) had been constructing small switchers since the early years of that decade.

Railroads were growing to like diesels for use in switcher and light duty work during this time due to the savings they afforded.

As it were, Davenport's most popular model seemed to be the 44-ton type, which General Electric also found to be of high demand with a switcher it constructed of the same weight.

The company was still finding some success in the light steam market. During World War II it signed a government contract to build a USATC (United States Army Transportation Corps) S100 Class 0-6-0 for use in the African campaign, and later in Europe as the war progressed.

These reliable locomotives were also built by Porter and Vulcan Iron Works with nearly 400 manufactured for the war effort. Once again, Davenport's equipment performed so well that the U.S. Army bestowed upon the company its "E" Production Award for Excellence in War Production.

Davenport, and later subsidiary H.K. Porter, produced a wide variety of gas and diesel engine switchers.  Most were acquired by industrial operations or short lines although occasionally a Class 1 system also purchased their designs (such as the Rock Island).  Some of the company's more notable models included:

Not all of Davenport's switchers were saddletanks, such as this little 38-ton, 0-4-0 manufactured in 1909.

Following the war the builder focused almost exclusively on diesel switchers. Its largest turned out to be one of its last, the 112-ton model, a center-cab design that looked like a big brick on B-B trucks.

In May, 1955 Davenport-Besler was purchased by the Canadian Locomotive Company and a year later, on May 17, 1956 its plant was shutdown ending more than 50 years of locomotive production.

Despite its closing, because Davenport locomotives were small and lightweight they became excellent for restorations by tourist lines and railroad museums due to their much lower cost compared to larger models. As a result, several can still be in use around the country.