The Daylight, Southern Pacific’s original train that later became an entire fleet, was one of the most successful and recognized streamliners of all time even rivaling the Santa Fe’s legendary Super Chief.

Interestingly, however, only one was a long distance train as the rest were regional runs which served several different Californian cities.

The popularity of the train remained incredibly high for many years even through the early 1960s.  However, by the latter half of that decade the Southern Pacific began greatly reducing services and amenities on its fleet as patronage declined.

By that time the railroad grew increasingly disinterested in operating passenger trains resulting in its fabled Daylight fleet coming to an unceremonious end in the early 1970s.

Today, a version of this successful fleet remains under Amtrak as the popular Coast Starlight.  In addition, Southern Pacific 4-8-4 #4449 remains operable as does a handful of original Daylight cars.

Much like the Pennsylvania Railroad was an institution to its home state of Pennsylvania, so too was the Southern Pacific in California. 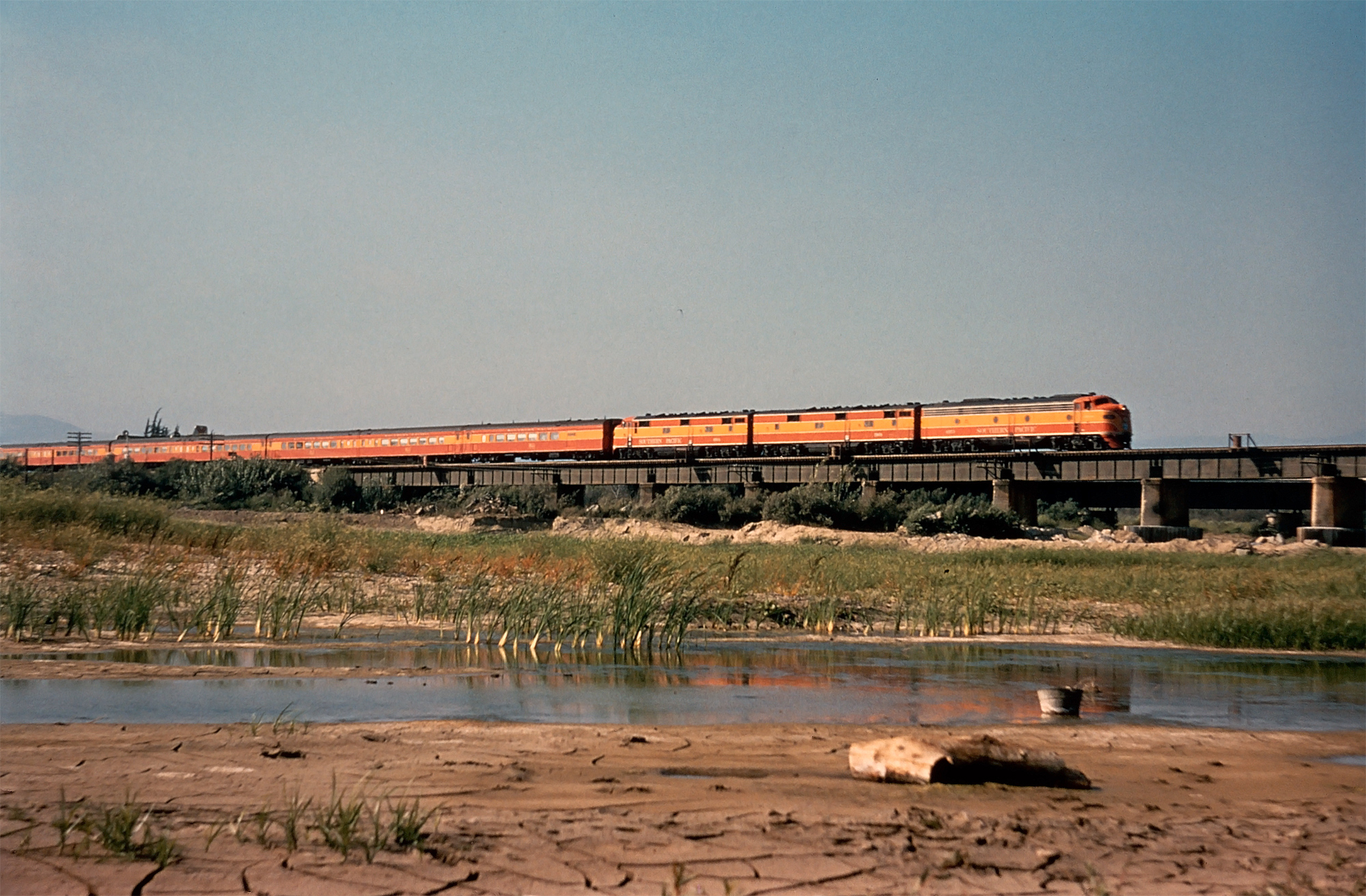 A Southern Pacific E9A, along with a pair of E7's, hustle train #98, the southbound "Coast Daylight," over the Santa Clara River at Oxnard, California, circa 1956. Gordon Glattenberg photo. American-Rails.com collection.

Also just like the Pennsy, the Southern Pacific (also referred to affectionately as the “Espee” by railfans and historians after its SP reporting marks) has such a history that entire libraries of books could be written on the differing aspects of the railroad. 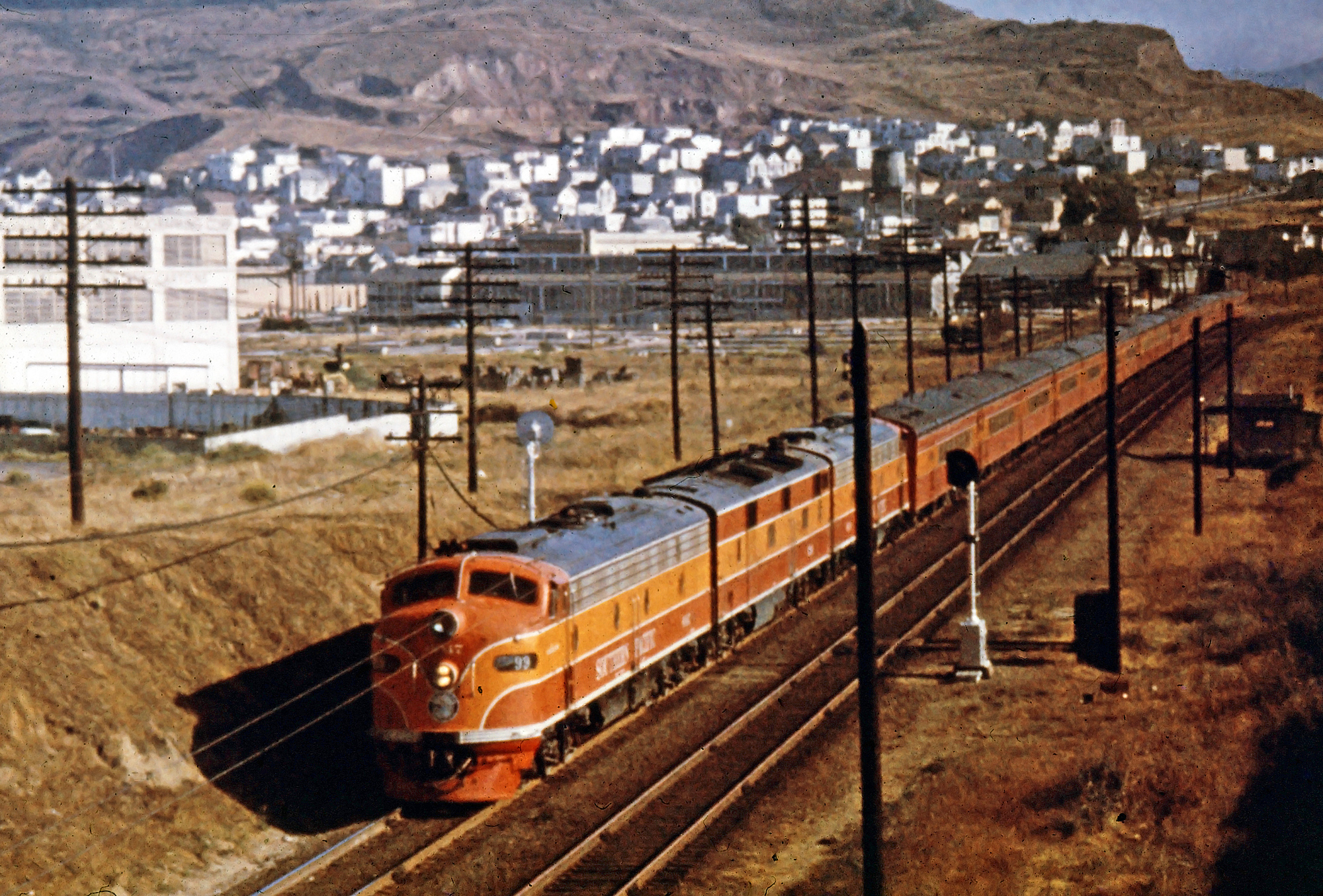 The Southern Pacific’s famed Daylight has its beginnings dating back to early 1937 when on March 21st it was inaugurated as an all-streamlined passenger train serving Los Angeles and San Francisco. Up front was a Golden State, 4-8-4 steam locomotive built by the Lima Locomotive Works.

These 4-8-4s were listed as Espee’s GS-2 class and featured handsome streamlining that would become legendary. The livery, which would also go down in history as one of the all-time classics, chosen for the train was designed by the railroad’s own Charles Eggleston of red, orange, and black. 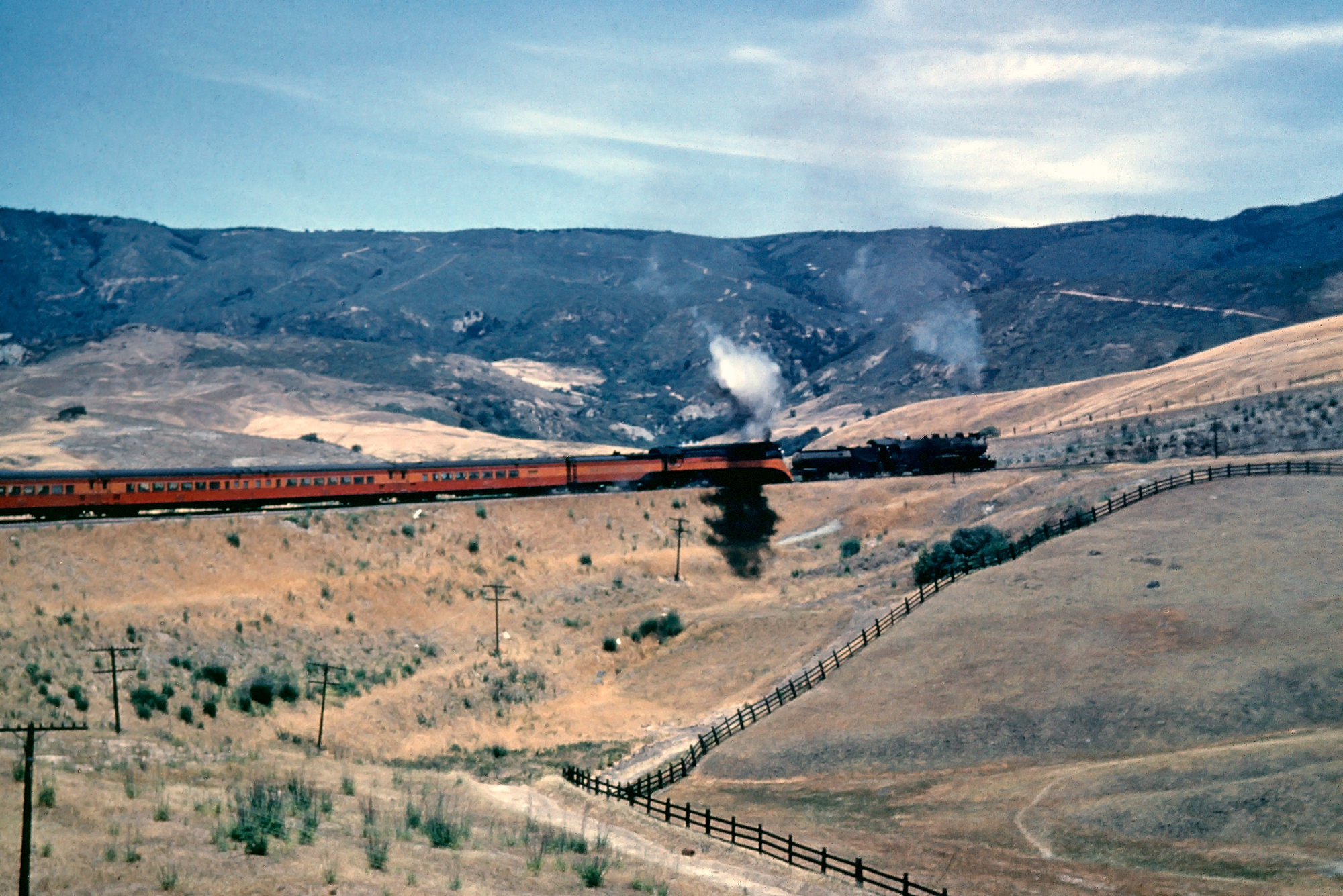 A Southern Pacific 2-8-2 assists a 4-8-4 with the "Coast Daylight" climbing the horseshoe curve over Cuesta Grade west of San Luis Obispo, California during the 1950s. A.C. Kalmbach photo. American-Rails.com collection.

What made the train so successful was as much of the route it followed as the amenities aboard. Views along the way from San Francisco included the Santa Clara Valley in all of its splendor, surf-side along the Pacific Ocean, and the Santa Margarita Range.

Essentially, many of the best views that California had to offer could be witnessed right outside the windows of the Daylight. While the views outside were spectacular, the services inside were just as good. 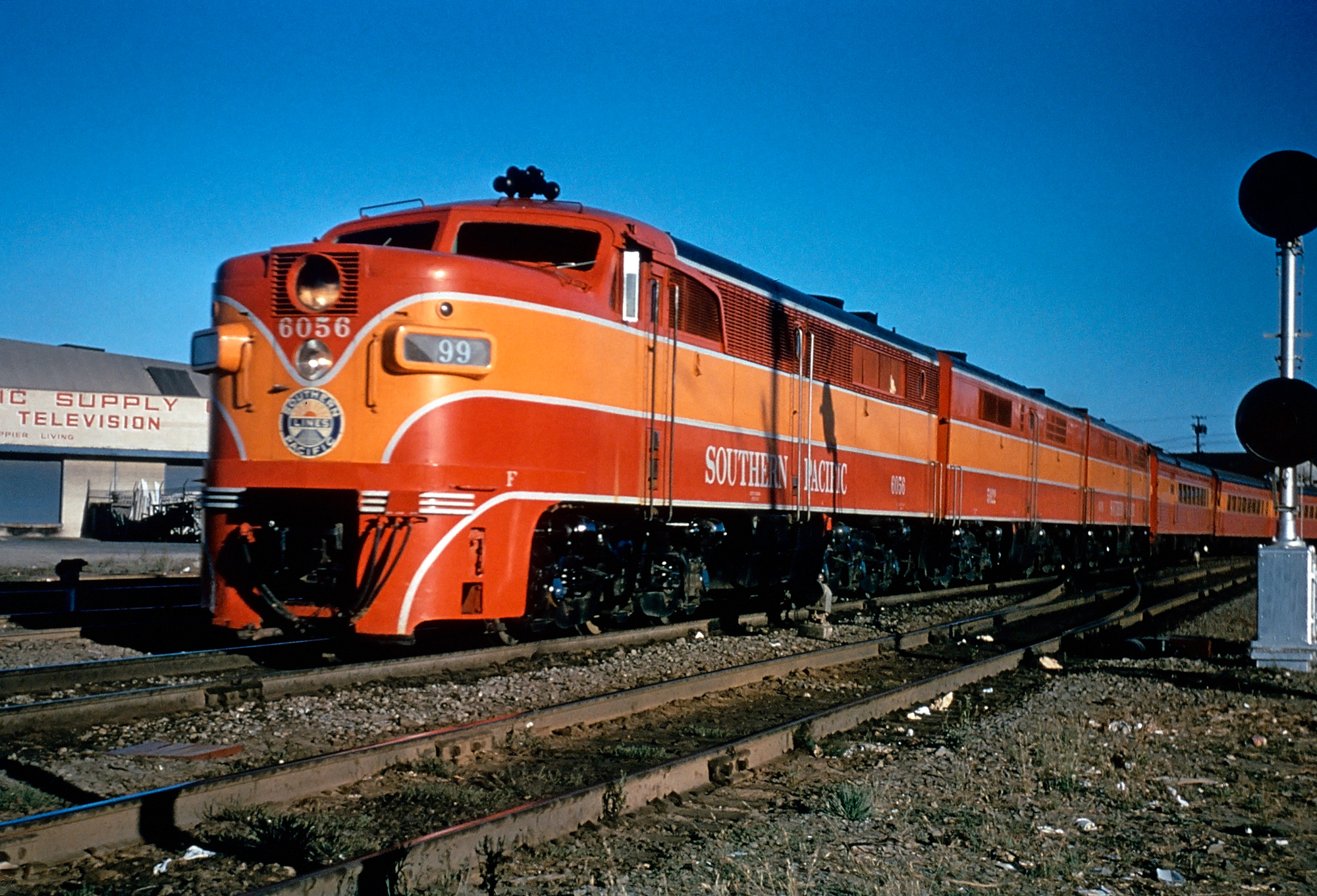 The SP spared no expensive on the train, and it showed. Aside from the incredible outdoor views the train’s keynote feature was an articulated, two or three-car diner-tavern-lounge that offered open, unimpeded space between all three cars due to a new design feature from Pullman-Standard.

This design removed the bulkheads between cars and created an open walkway space between them to look as if all three were one. On top of all of this the train was entirely air-conditioned, a rare treat in the late 1930s. 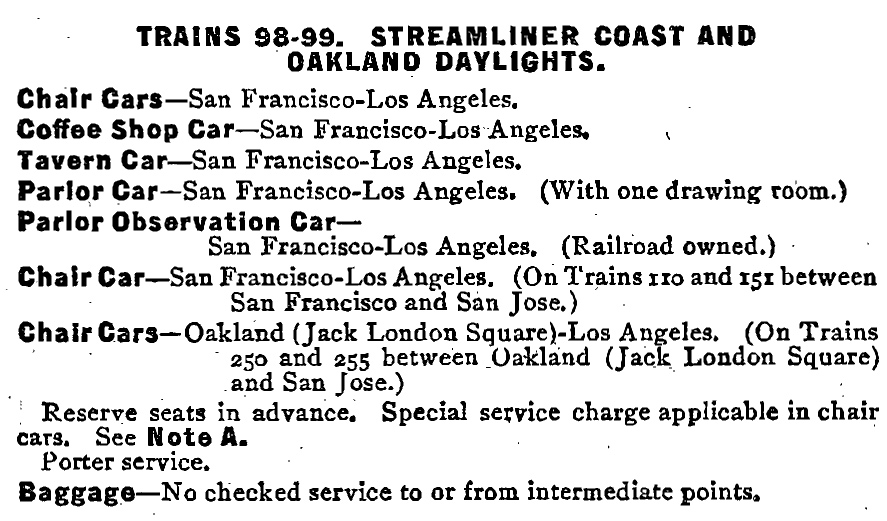 According to the Southern Pacific's 1938 timetable the Daylight, listed as Trains #98 (southbound) and #99 (northbound), left San Francisco's 3rd Street Station at 8:15 am and arrive in Los Angeles by 6 pm that evening, clipping the Pacific coastline most of the way.

The train also offered connecting service via Oakland and Fruitvale to San Jose. There were other experiences like it, especially if you loved the beach and warm weather. The train carried an average train speed of nearly 50 mph and could complete its trip in under 10 hours. 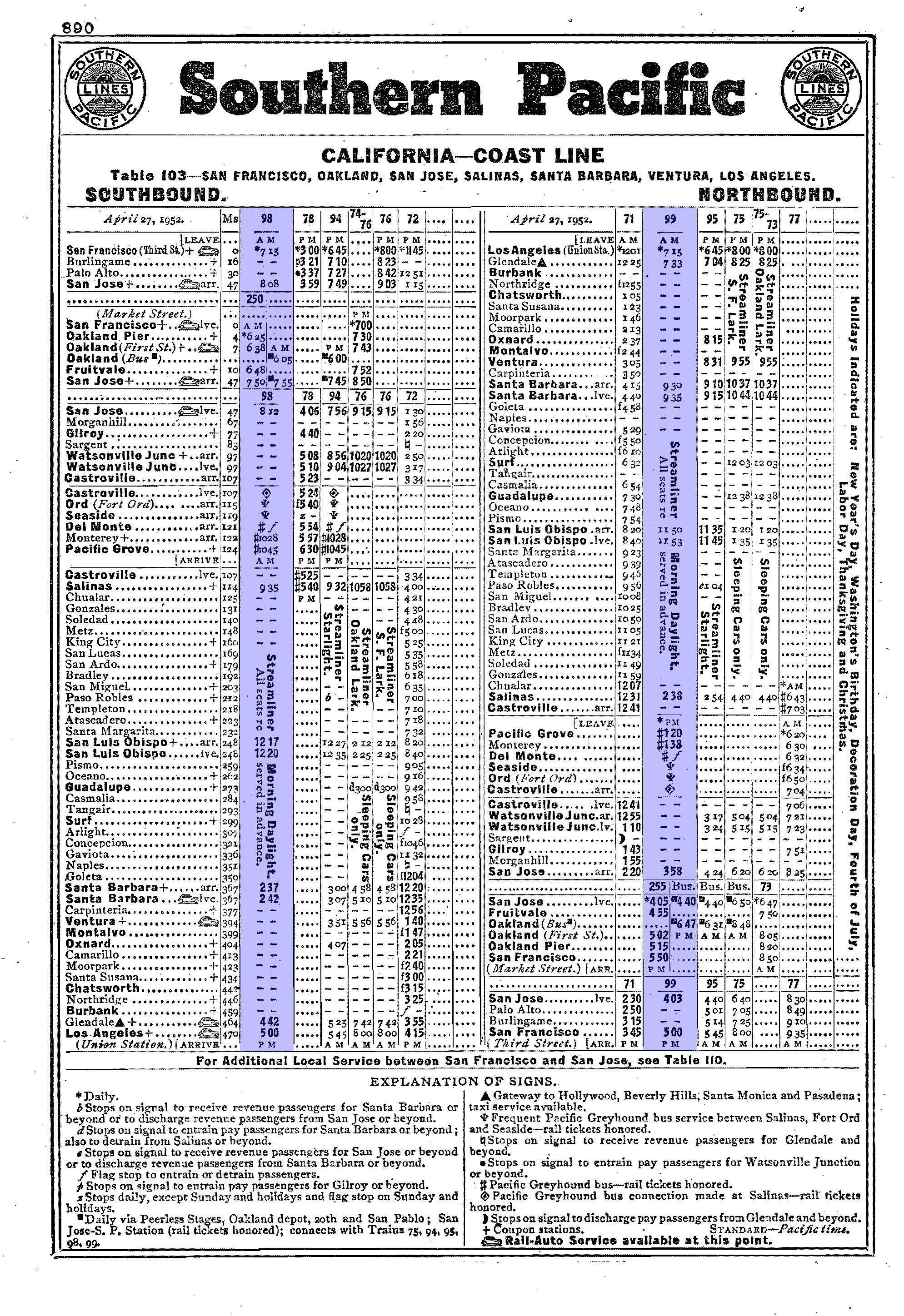 It was an extraordinarily popular train that within a few years of its inauguration had the highest ridership numbers in the country. Demand for the train became so high by the late 1930s that the Southern Pacific simply had no way to meet the need.

As it waited for new equipment to arrive from Pullman-Standard the SP launched a second Daylight using mostly older, heavyweight equipment.

When the railroad finally did receive its new equipment it setup three San Francisco – Los Angeles runs of the train called the Morning Daylight, Noon Daylight, and Night Daylight.

Quickly realizing it was on to something the Southern Pacific decided to launch an entire fleet offering regional service to many California cities.

These trains included the Lark (which served LA – San Francisco at night it was adorned in an interesting, but catchy two-tone gray livery), San Joaquin Daylight (Oakland – Los Angeles), and the Sacramento Daylight (Sacramento – Lathrop). 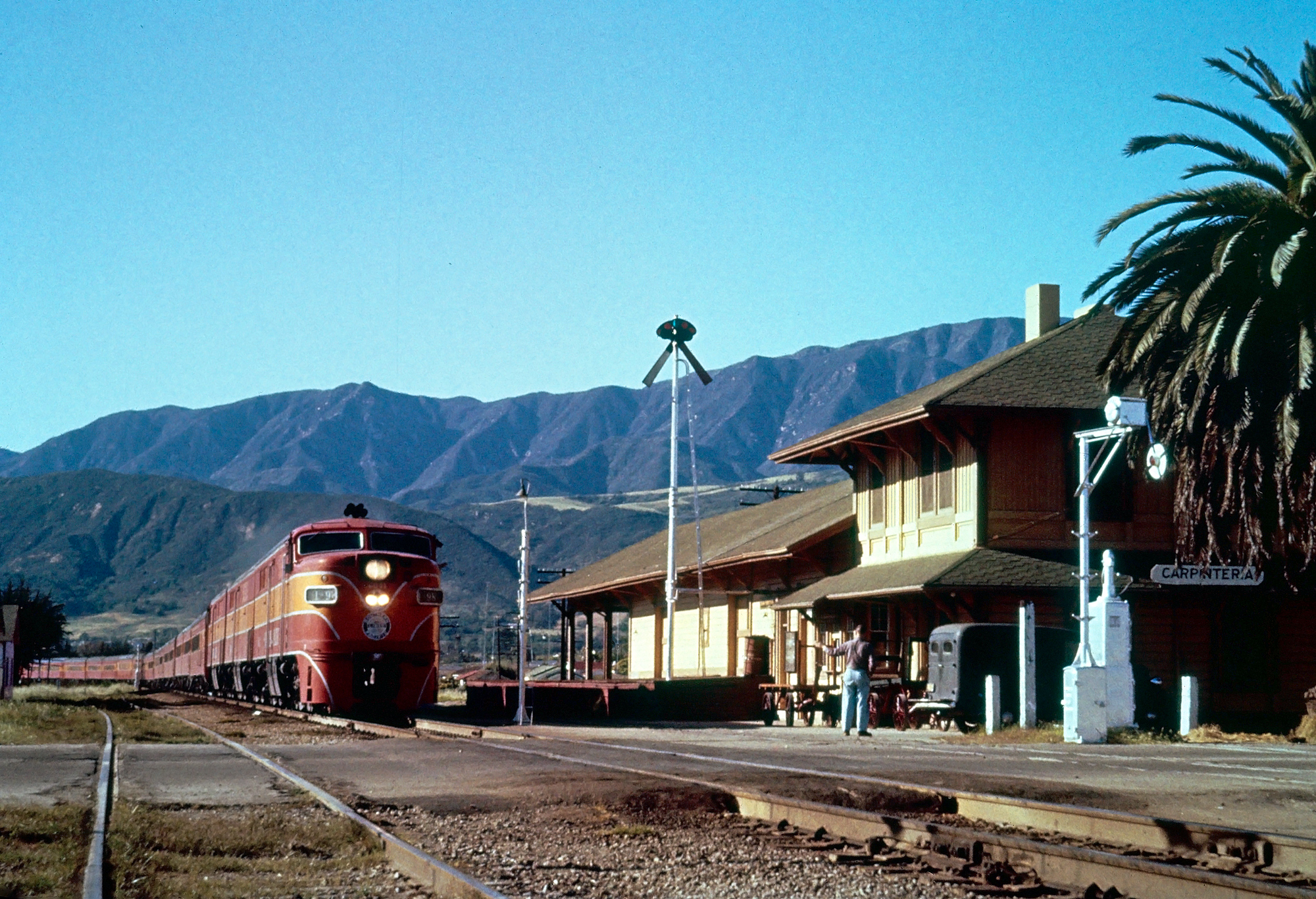 The fleet remained very successful through the early 1960s but even Southern Pacific, with its vast array of popular and extravagant passenger trains, could not compete with the age of the automobile and super-fast jet airliner.  In addition, the railroad was growing increasingly disinterested in handling such services.

Most of the SP’s fleet had disappeared by the time of Amtrak in 1971, although its original, now named the Coast Daylight remained and was initially kept under Amtrak although was eventually terminated in favor of the Coast Starlight.

This new train now operates over the Southern Pacific’s old tracks between LA and Portland, following virtually the same route as the Shasta Daylight and is today one of Amtrak’s most popular trains.