Of the six large, "second generation" passenger terminals to serve Chicago Dearborn Station was certainly the oldest, dating back to the 1880s.

The station gained its name from the street upon which it was located and is also known as the Polk Street Station (the other street the building is situated next to).

While Dearborn did not see nearly the same number of train movements and passenger traffic as nearby terminals it did claim the most railroads using its facilities.

There were no fewer than seven (eight, including the managing railroad) different companies with an ownership stake in the terminal; the most famous was the Atchison, Topeka & Santa Fe Railway.

Because of this it was a railfan's paradise with a rainbow of paint schemes coming and going daily. With the creation of Amtrak, terminals and services were centralized at Union Station. However, Dearborn Station was not demolished and survives today as a prominent office and retail building. 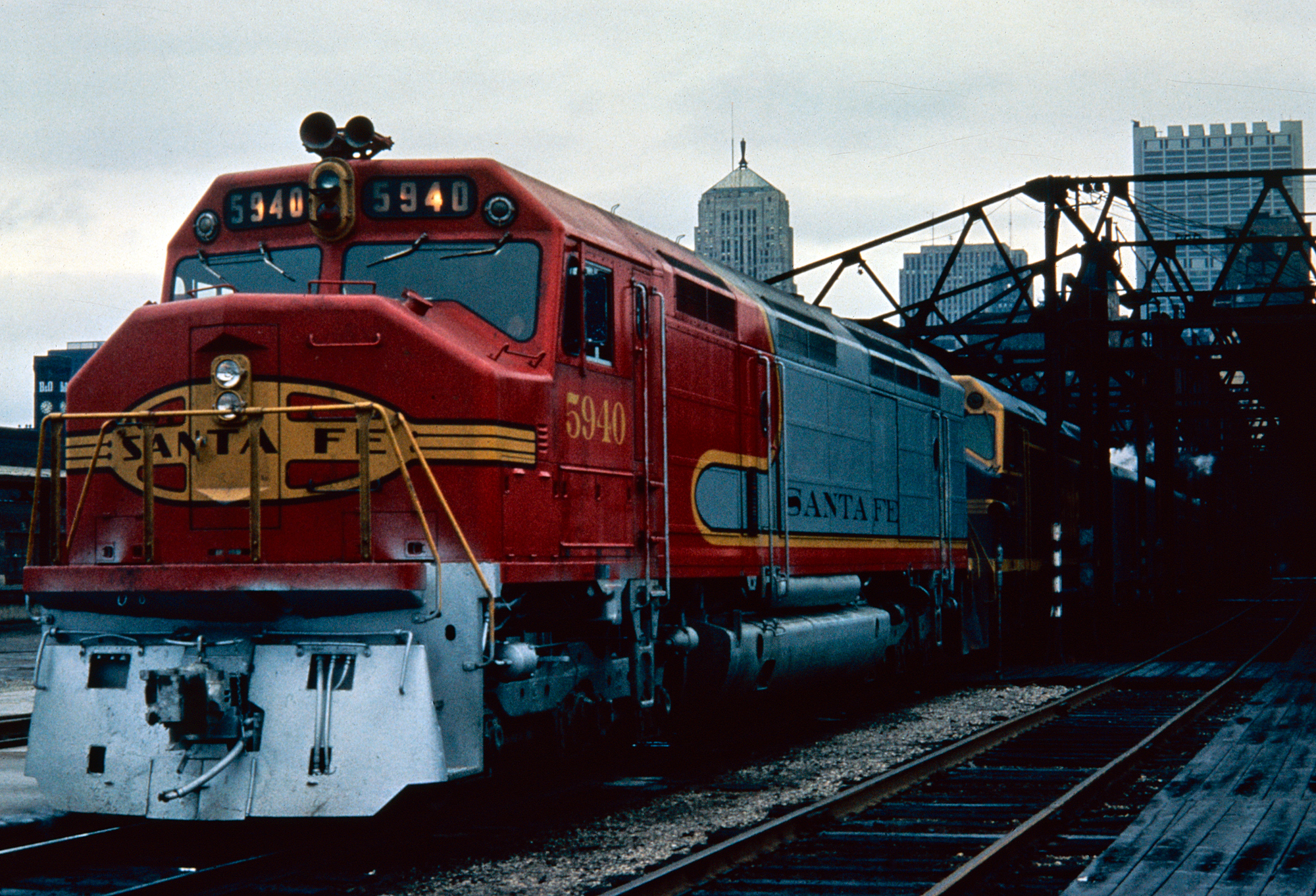 Located within the heart of downtown Chicago near the Lake Michigan waterfront, Dearborn Station was an early attempt by many of Chicago's railroads to consolidate their passenger services within one terminal.

There had been no previous facility on the grounds upon which Dearborn was built, located along West Polk Street and directly south of South Dearborn Street.

Until it was completed, railroads used a temporary facility near 12th Street and State Street (this building became too small requiring the railroads to move into a nearby Baptist Church).

The terminal's seven tenants included mostly eastern and Midwestern railroads although the iconic Santa Fe also elected to use the station.

Along with the AT&SF these other lines included:


To manage and oversee the terminal's operations the companies purchased the Chicago & Western Indiana Railroad, which also helped to secure needed funding for the new passenger station.

While the C&WI served just a very local area, and mostly provided logistical support in moving and shuffling trains and cars, it did provide commuter service as well.

Actual construction of Dearborn Station began in early 1884 and work on the facility moved quickly as the space was desperately needed.

The headhouse was designed by architect Cyrus L. W. Eidlitz and built by J. T. Alton, who constructed the building in the Romanesque Revival style.

Eidlitz used pink granite and primarily red brick for the building's exterior, which featured a beautifully centered clock tower which rose more than 200 feet above the ground.

Additionally, the building was 212 feet wide with a train shed that extended more than 700 feet behind the headhouse. As an added touch Eidlitz gave the building dormer windows and louvered roofs, which were fashioned after the architecture of buildings in Luxemberg. 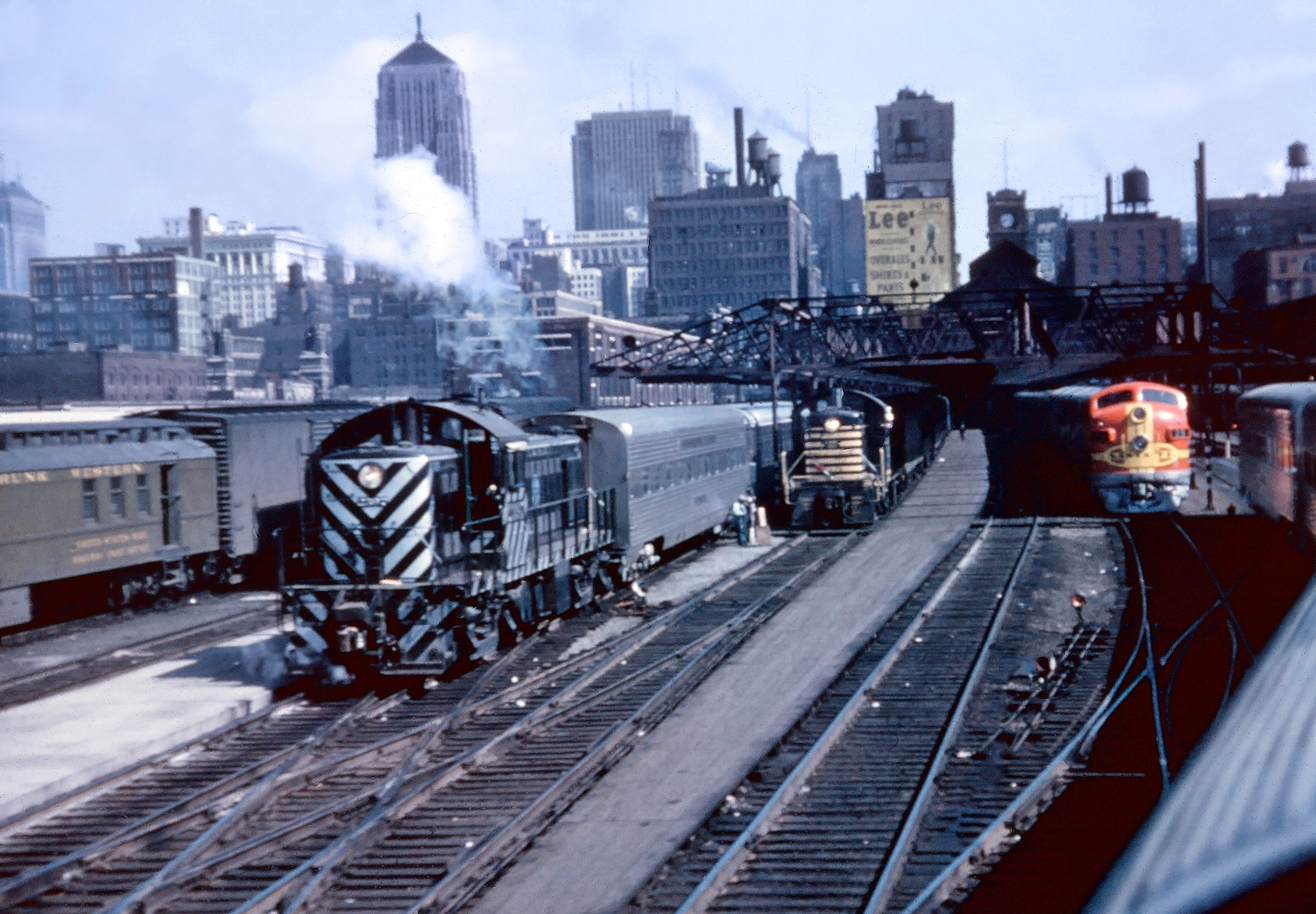 A busy scene at Dearborn Station during the 1950s. At right is Santa Fe F3A #29-L while a Chicago & Western Indiana RS1 can be seen carrying out switching chores a few tracks over. Next to it is a Santa Fe RS1 performing its own switching of AT&SF equipment. A.C. Kalmbach photo. American-Rails.com collection.

The station's train shed featured 10 staging tracks and the individual railroads to use the facility constructed their own approach tracks into Dearborn.

When the station was opened on May 8, 1885 it had cost nearly $500,000 to complete. It was quite an impressive terminal featuring a classic Harvey House Restaurant, ornate waiting rooms, upstairs offices, and in 1893 received its own power plant to allow for efficient and interrupted operations.

During the height of passenger rail travel in the early 1920s Dearborn Station played host to 146 trains per day carrying more than 17,000 passengers.

Years later during the streamliner era the terminal not only allowed for some enjoyable railfanning but also provided photographers with a beautiful background of the Chicago skyline.

Trains that could be seen calling at Dearborn included all of the Santa Fe's most prominent such as:

Sadly, disaster struck the station in 1922 when it lost its attic, dormer windows, and beautiful pitched roofs due to a fire.

Thankfully, most of the structure was saved although it was redesigned with a simple flat roof (as was the clock tower).

However, it was still an interesting place to visit and railfan during the 1950s and 1960s, seeing cars being shuffled around the approach tracks and yard, general mail and freight being sorted, and parcel mail being processed through the Railway Express Agency's large facility onsite. It must have been quite a sight. 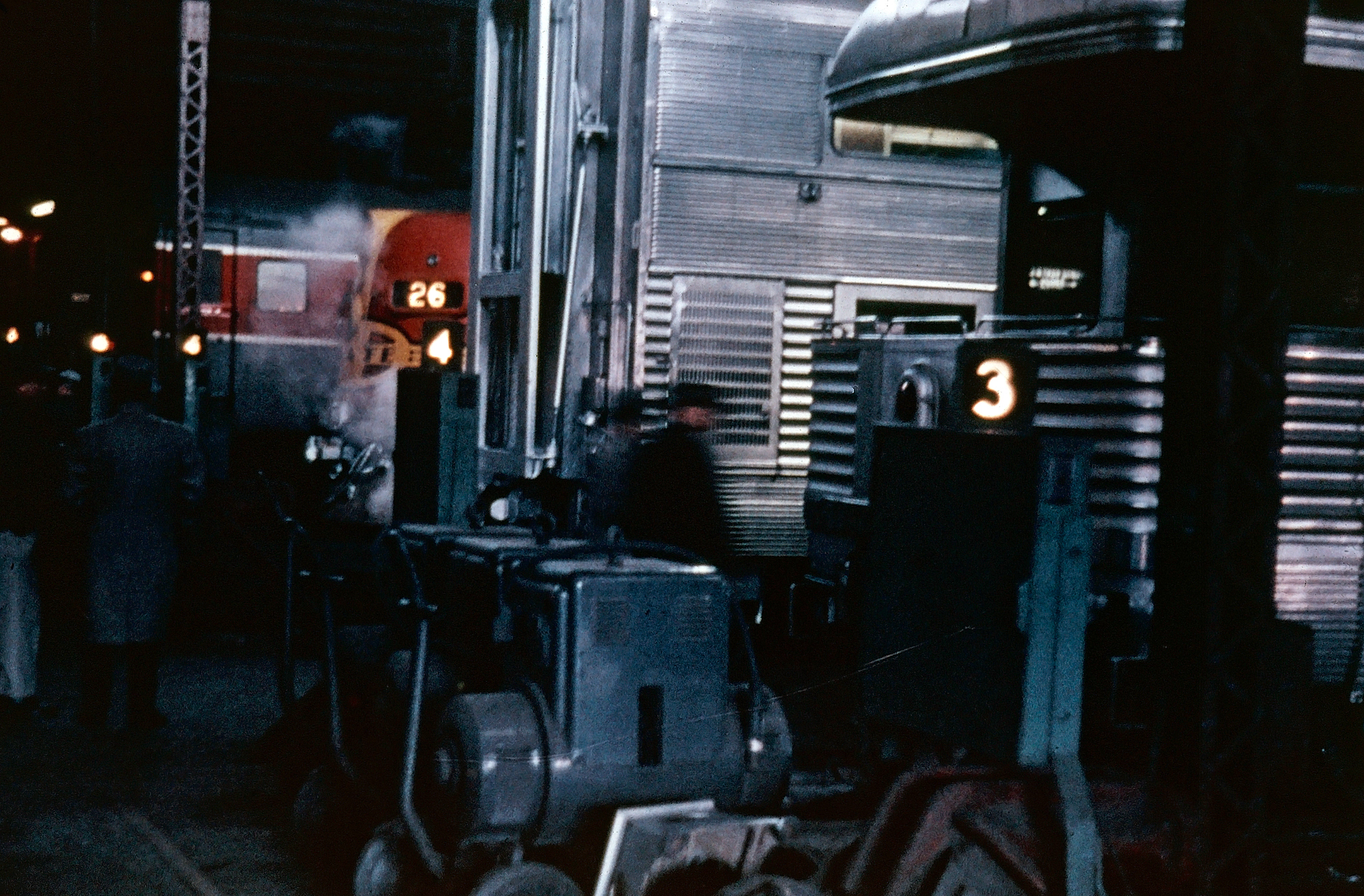 A busy scene inside Dearborn Station during the 1950s. Several Santa Fe trains can be seen, as well as a Monon service next to Santa Fe F3A #26-L. A.C. Kalmbach photo. American-Rails.com collection.

On September 30, 1967 the Monon Railroad was the first to end service at Dearborn Station and other railroads slowly followed (the C&O had left years ago, transferring its trains to the south at Grand Central).

May 1, 1971, Amtrak's first day of operations was the station's last. The next day the national passenger carrier closed the facility and all others around Chicago, transferring services to Union Station.

For the next five years Dearborn's tracks and trainshed sat unused as did the headhouse. In 1976 the tracks were removed and trainshed demolished.

The former property was then turned into an urban renewal project and today nothing is located here save for Dearborn Park and Roosevelt Park. The station was later restored and today houses offices and retail stores, as one of Chicago's architectural masterpieces.