The Del Monte was not a particularly flashy or exotic train on the Southern Pacific, serving a corridor of just over 100 miles between San Francisco and Monterey traveling the Coast Line and Monterey Branch.

Perhaps its most indelible trait had nothing to do with the services it provided but merely its place in history, surviving longer than any other on the Espee system when it disappeared into Amtrak after April 30, 1971.

The Del Monte's history can be traced back to the late 19th century and, especially in later years it was little more than a glorified commuter run despite the railroad's protests to the contrary.

Since the train was retired many efforts have been made to resurrect passenger service over the Monterey Branch but thus far have been thwarted by local opposition and lack of funding.  Ironically, today, most of the rails remain in place, only buried beneath dirt and sand. 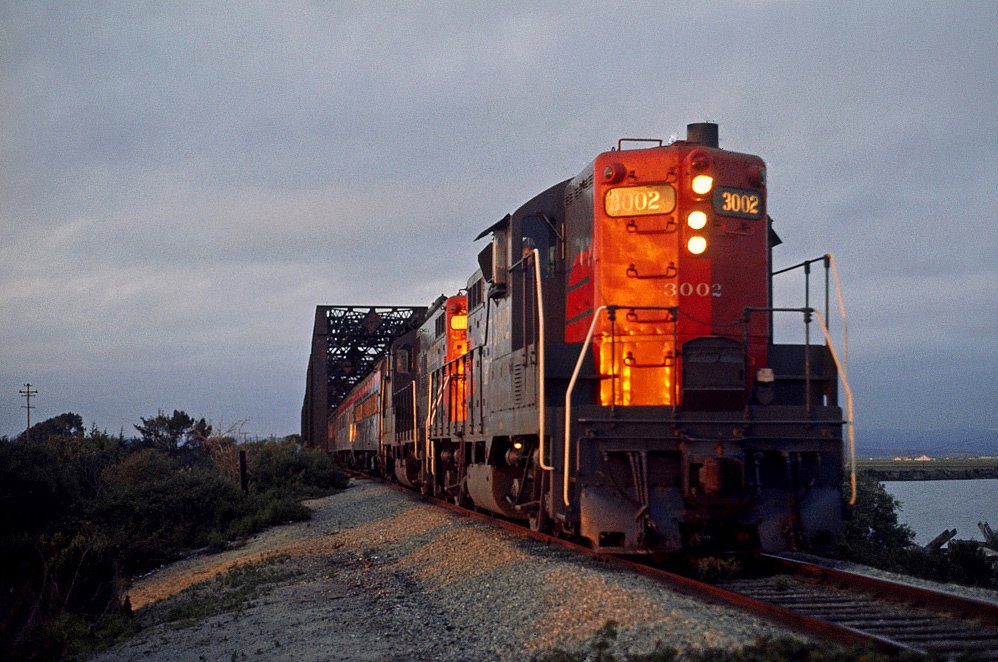 Illustrating the gorgeous views afforded along what was the Southern Pacific's Monterey Branch, a pair of GP9Rs led by #3002 have the "Del Monte" as it crosses the Salinas River on the evening of April 29, 1971. Drew Jacksich photo.

Over the years the Southern Pacific fielded a vast array of popular and luxurious passenger trains, several of which whose names endure today such as the Daylights, Sunset Limited, Golden State, Sunbeam, and Lark.

They served every inch of the railroad's vast system from Louisiana to Oregon but only California could boast such an incredible number of trains all serving within its own borders.  Most were part of the Daylight fleet and as Brian Solomon notes in his book Southern Pacific Railroad its:

"...passenger service was atypical of Western roads.  It had the largest and most developed passenger network in the far West and operated a plethora of plush named trains, secondary limiteds, mail trains, and branch line locals.  It was the only carrier in the far West to operate an intensive commuter rail network and the first railroad in the West to operate a deluxe, overnight, all-sleeping-car-train.

In addition to its conventional locomotive-hauled trains, Southern Pacific and its subsidiaries - notably Pacific Electric - operated the most extensive electric interurban networks in the West."

The rise of what became the Del Monte began in the 1880s when the town of Monterey began to grow thanks to its resort, seaside status.  As a result, according to Joseph Schwieterman in his book When The Railroad Leaves Town:  American Communities In The Age Of Rail Line Abandonment the SP acquired the small Monterey Railroad in 1888 to serve the growing town, which became its Monterey Branch.

The following year in 1889 it launched the Del Monte Express providing regional service between San Francisco and Pacific Grove, a few miles west of Monterey.  Additionally, it extended the line to Lake Majella further to the west to serve a sand and silt facility. 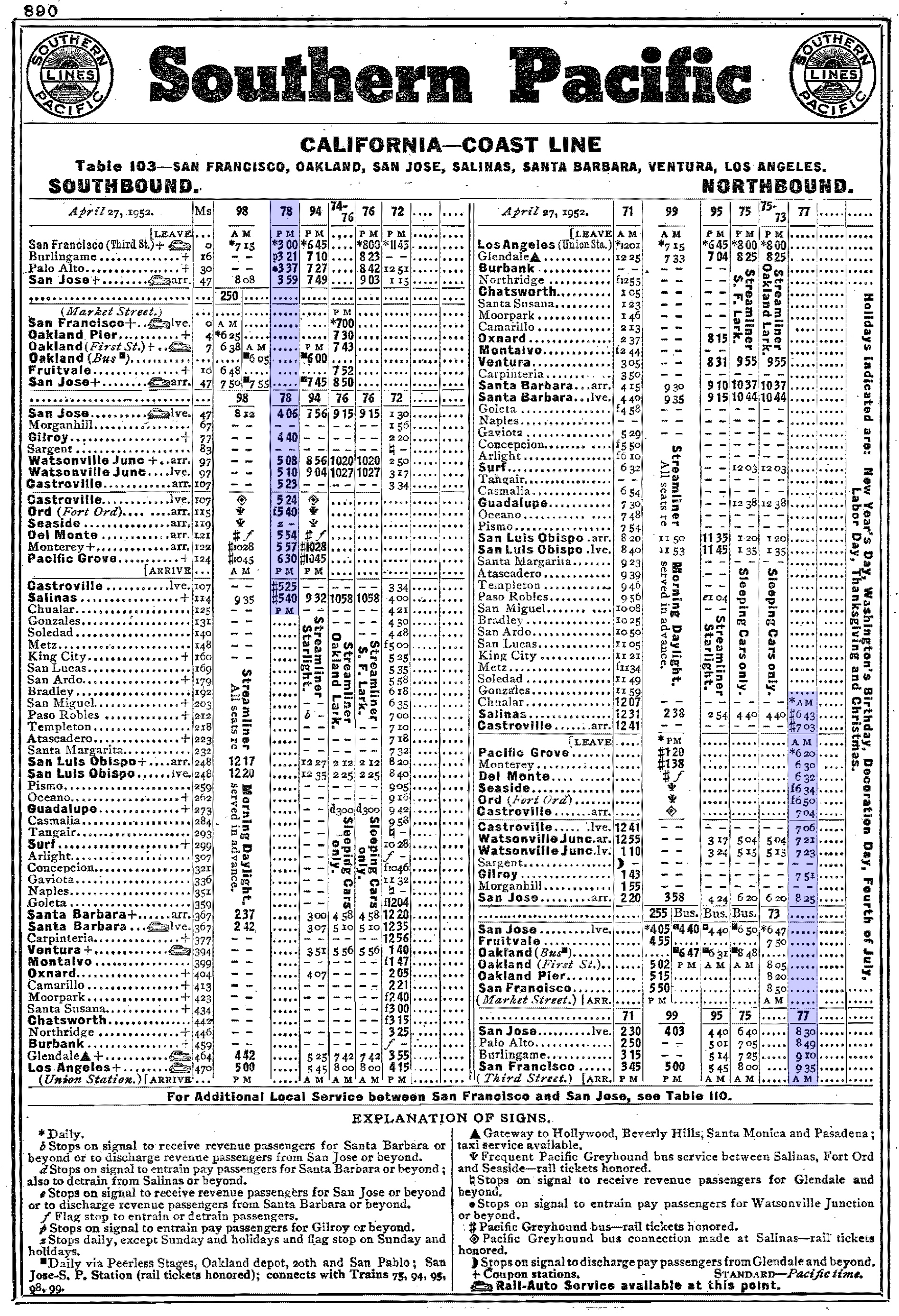 The Del Monte, originally listed as #77 (southbound) and #78 (northbound), utilized the famed Coast Line southward to Castroville and then turned southwesterly onto the Monterey Branch.

The train's original accommodations were very respectable considering its regional nature.  As Schwieterman states travelers could enjoy fine dining and parlor services along with coach and lounge services.  The draw to Monterey was not only due to the ocean but also the Hotel Del Monte resort, the latest of which had been constructed in 1887 to replace an earlier structure.

According to Schwieterman both Presidents Teddy Roosevelt and William McKinley traveled to the hotel via the Del Monte.  By the 1920s, the town's status as a popular resort destination was fading somewhat but it still provided the Southern Pacific with considerable freight and passenger trains maintained steady ridership.

(Note that by this date the Del Monte's train numbers were 126 [southbound] and 141 [northbound]. Also "a" denotes taxi service only to Pacific Grove, via 216 Grand Avenue according to SP's timetable.)

The World War II years saw a significant boost to both with the construction of a military base near Seaside close to Monterey and Fort Ord.

At this time the Del Monte's consist normally included a mail-baggage car, five coaches, a standard lounge, and a parlor-buffet lounge. Following the war the branch witnessed a sharp decline in freight and passenger traffic, despite Monterey's strong growth in population throughout the 1950s.

By the middle of that decade the Del Monte's consist had been reduced to a mail-baggage, a few chair cars (some of which were air-conditioned), a coach, and a parlor-buffet observation.   During 1957 the SP was able to eliminate service to the end of the branch at Pacific Grove but continued to host the Del Monte along the 126 miles between Monterey and San Francisco.

As passenger ridership continued its agonizing decline all across the railroad it grew increasingly disinterested in such service.  However, in an interesting move to the contrary the Espee made a concentrated effort to revive the slumping Del Monte at this time assigning it with some lightweight equipment and a parlor-snack-lounge car. 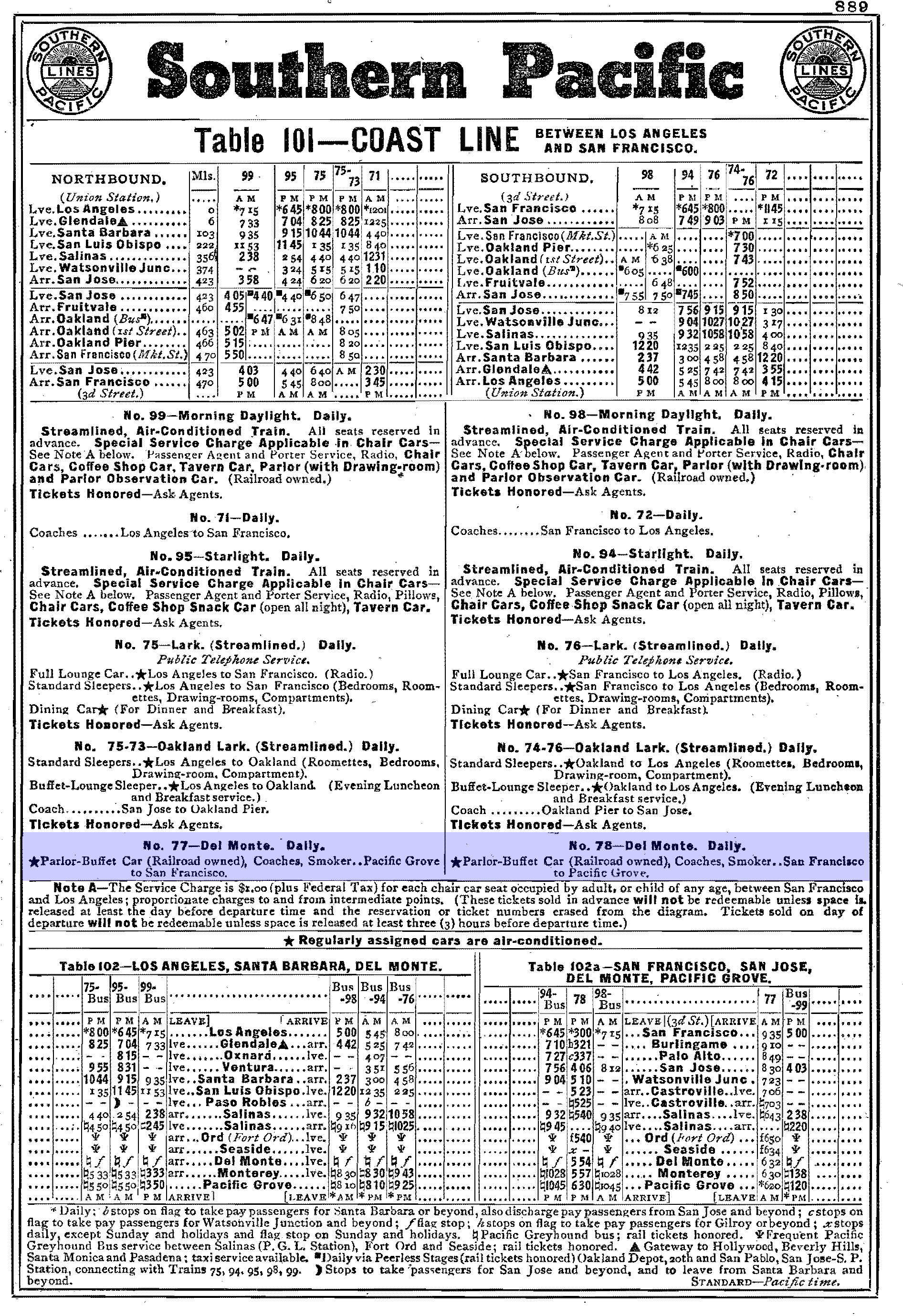 Unfortunately, such attempts proved futile to lure the public back to the rails and Schwieterman notes that by 1961 the train was combined with suburban service between San Francisco and San Jose, running with extra cars between those two points.

As the 1960s dragged on and the Espee eliminated once popular trains like the Shasta Daylight and significantly reduced others the Del Monte soldiered on, normally assigned a chair car(s) and a parlor-snack-lounge with reserved seats powered by a GP9.

The quaint little train did not look like much in its final years but to the SP's credit always operated with clean equipment.  It remained on the timetable until Amtrak took over intercity passenger services on May 1, 1971 when the oldest named train on the Espee system became a historical footnote.

Following the train's end many groups tried, as early as 1977, to restart rail service to the Monterey area thanks to its growth as a suburban town within the Bay Area.  Unfortunately, none of these plans have made it past the drawing board coupled with opposition from local communities.  As freight declined in 1979 SP abandoned the Seaside - Pacific Grove segment, about three miles, that included Monterey.

According to Schwieterman the railroad sold the right-of-way between Monterey and Seaside to the local government for $4.3 million for preservation.  Today, the rest of the branch is still in place but is either in very poor condition or buried beneath a bike trail.