One of the early steam locomotives to ever be used in the United States was the DeWitt Clinton, an 0-4-0 model that was American built.

It is historically recognized as not only one of the first to operate in the country but also the very first to offer regularly scheduled passenger service in New York along the Mohawk & Hudson Railroad.

The locomotive was named after a former state governor, who ironically had championed the building of the Erie Canal (a slow, but the nonetheless, competitor to the railroad) some years earlier between Buffalo and New York City that was to be the future of transportation.

The Clinton was built with a now-classic design for a steam locomotive and even operated with a matching set of early passenger cars.

Unfortunately, as was so often the case in those days no one thought to retain it for its historical significance and it was scrapped within a few years. Today, a replica is now available to the public preserved at the Henry Ford Museum. 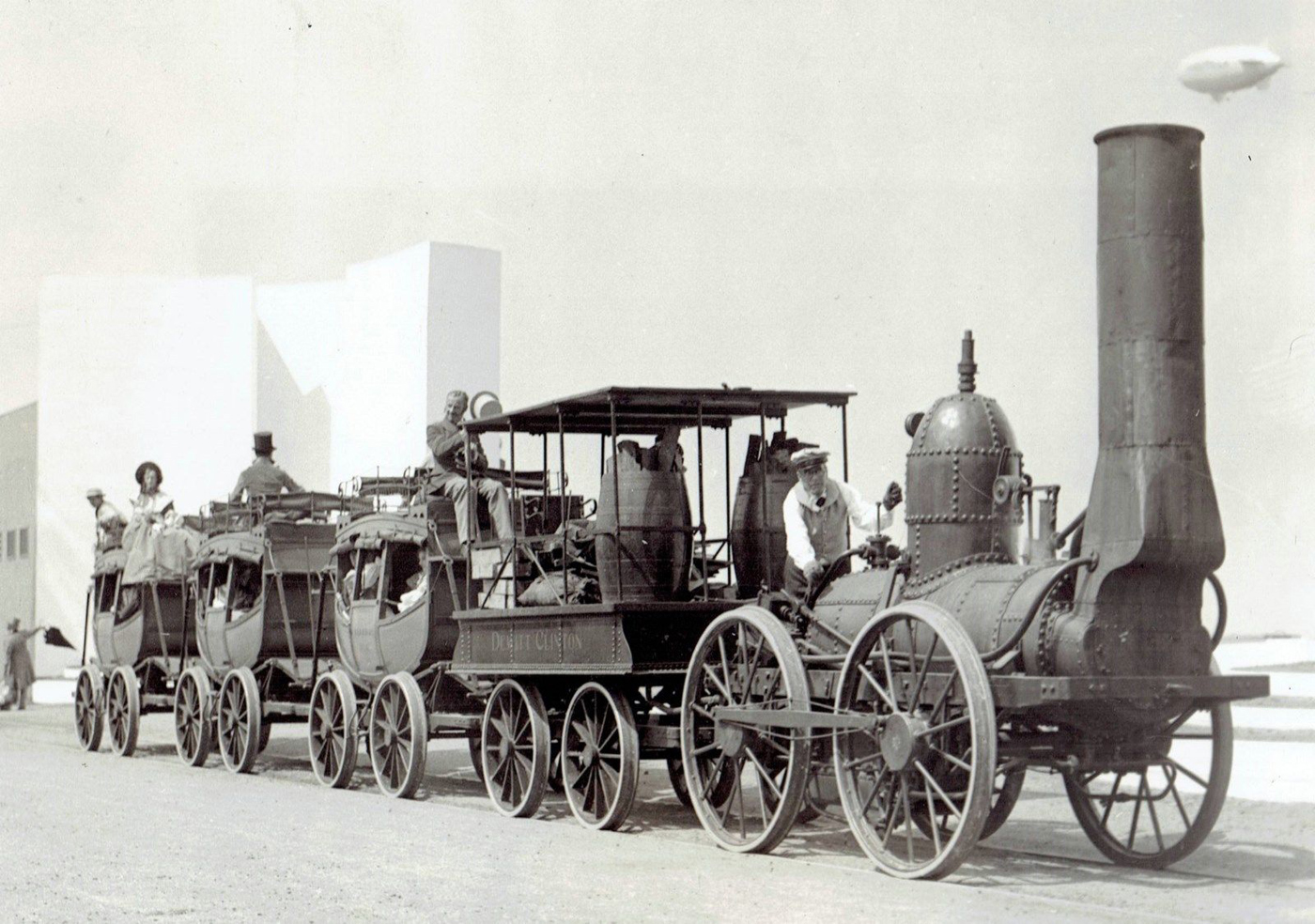 The "DeWitt Clinton" at the 1933 Chicago World's Fair (also known as "A Century of Progress International Exposition").

The Mohawk & Hudson was New York's first chartered railroad, and upon its creation the M&H was the second such system ever incorporated behind only the private Granite Railway of Massachusetts, formed a month earlier in March to move stone from a small granite quarry.

The railroad received its name for the two tributaries that it hoped to connect; the Hudson River at Albany and the Mohawk River at Schenectady. Due to funding issues, however, it took more than four years until construction actually began.

During this time a number of lines would be chartered and operated before the M&H including the B&O and South Carolina Canal & Rail Road based in the port city of Charleston. The line was meant to compete against the recently completed Erie Canal although its original intention was only to haul passengers, not freight. 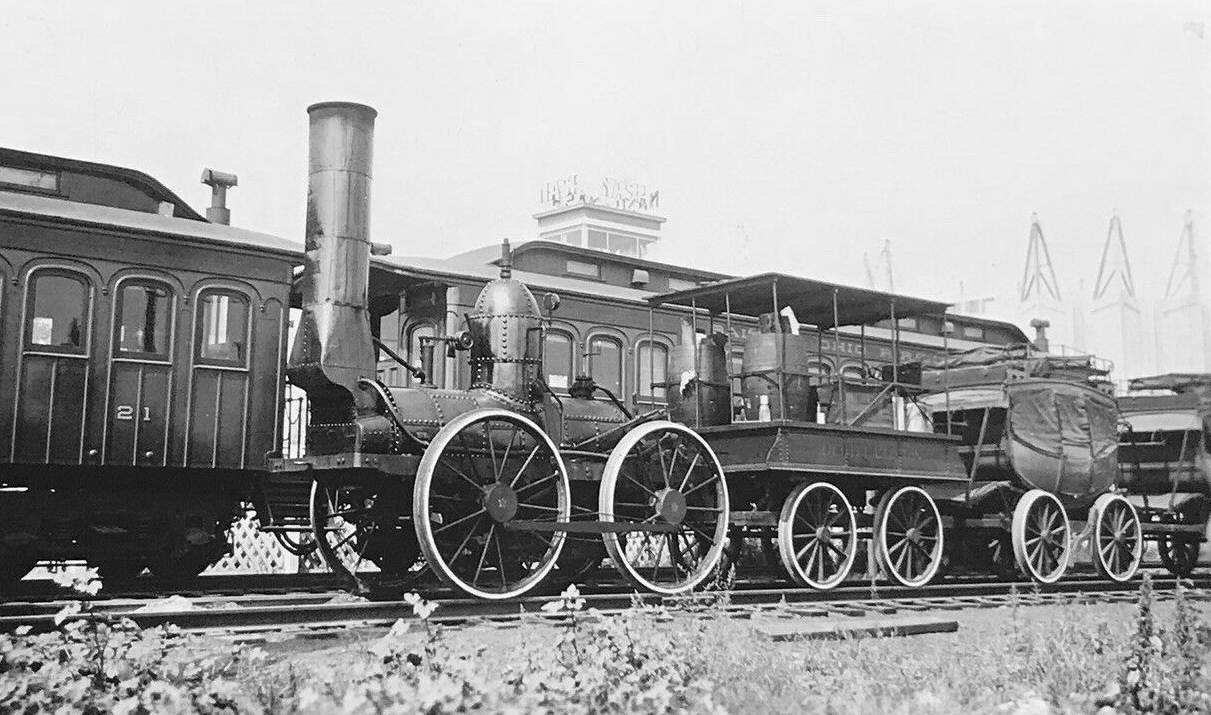 Another scene of the "DeWitt Clinton" on display at the Chicago Fair of 1933.

The railroad opened to much fanfare on August 9, 1831 when the DeWitt Clinton pulled the first regularly scheduled passenger train from Albany to Schenectady.

Interestingly, crowds were eager to ride this little 0-4-0 locomotive although tickets were so expensive only the rich were able to afford a the trip on such a futuristic piece of technology.

This was quite the contrary on the nearby Delaware & Hudson Canal Company when it had tested its English-built Stourbridge Lion two years earlier on August 8, 1829.

The locomotive was the first ever operated in the U.S. and it grabbed the intention of a large crowd as well, although many thought it would be a complete disaster (as a result, no one would ride behind it!).

That locomotive operated flawlessly and by 1831 steam technology had been proven to the point that most had a very different opinion, believing that railroads were the future in transportation. 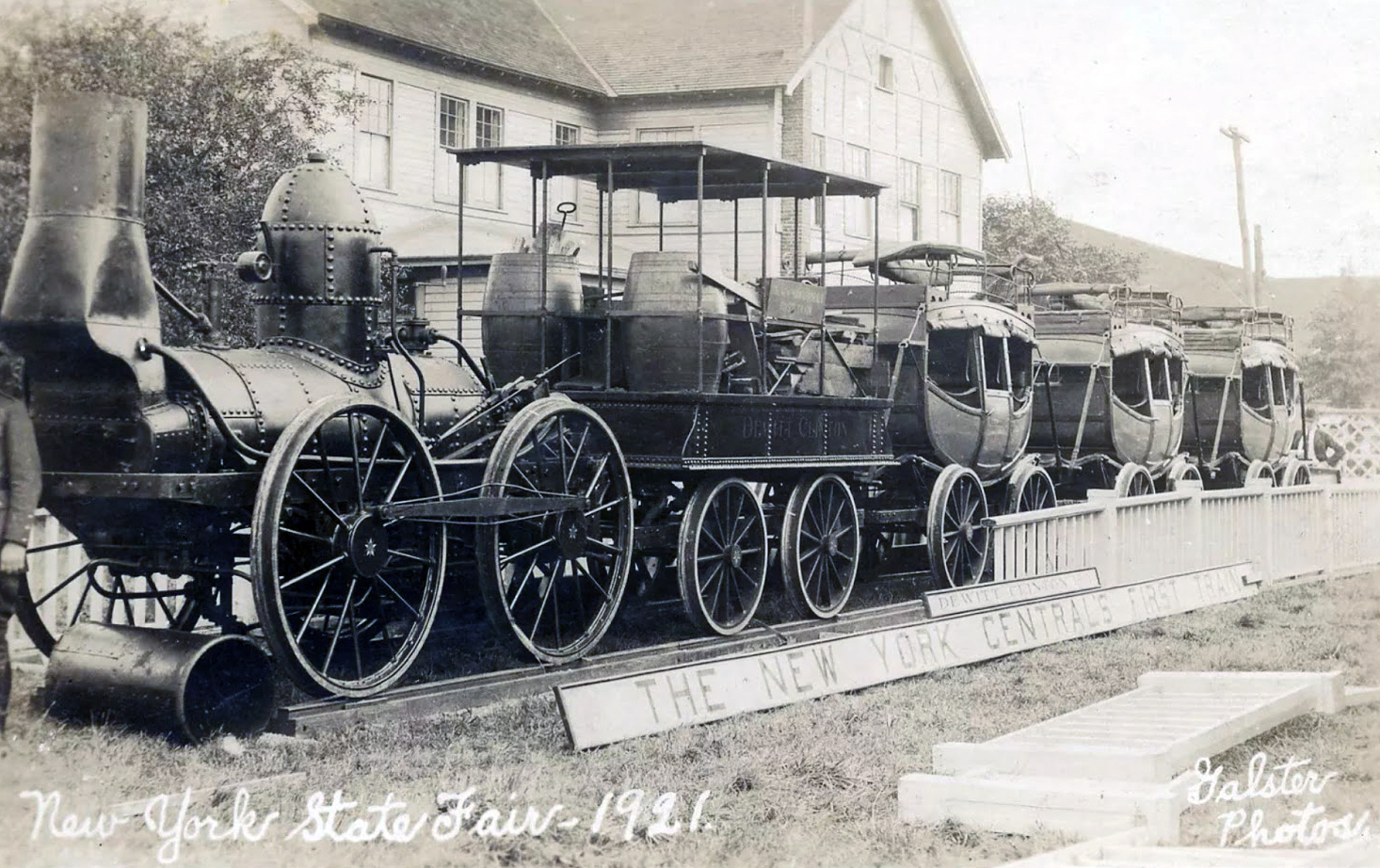 In this scene the "DeWitt Clinton" replica is on display at the 1921 New York State Fair. Note the sign, "The New York Central's First Train."

Most of the early steamers built in America were either constructed by the West Point Foundry in Cold Spring, New York (near NYC) or reassembled there after having been shipped across the Atlantic Ocean from England.

The DeWitt Clinton was no different. It was the third U.S.-built locomotive in the country behind only Peter Cooper's Tom Thumb (which was not built at West Point) and the SCC&RR's Best Friend of Charleston.

The steamer had been ordered by the Mohawk & Hudson's then chief engineer, John B. Jervis, who was already very familiar with the new machines.

Prior to coming over to the M&H in 1831 he had worked for the D&H and sent his apprentice, Horatio Allen, to learn more about steam locomotives to ultimately decide if it was worth purchasing one or more for use on the railroad. This led to the D&H acquiring the Stourbridge Lion and three others. 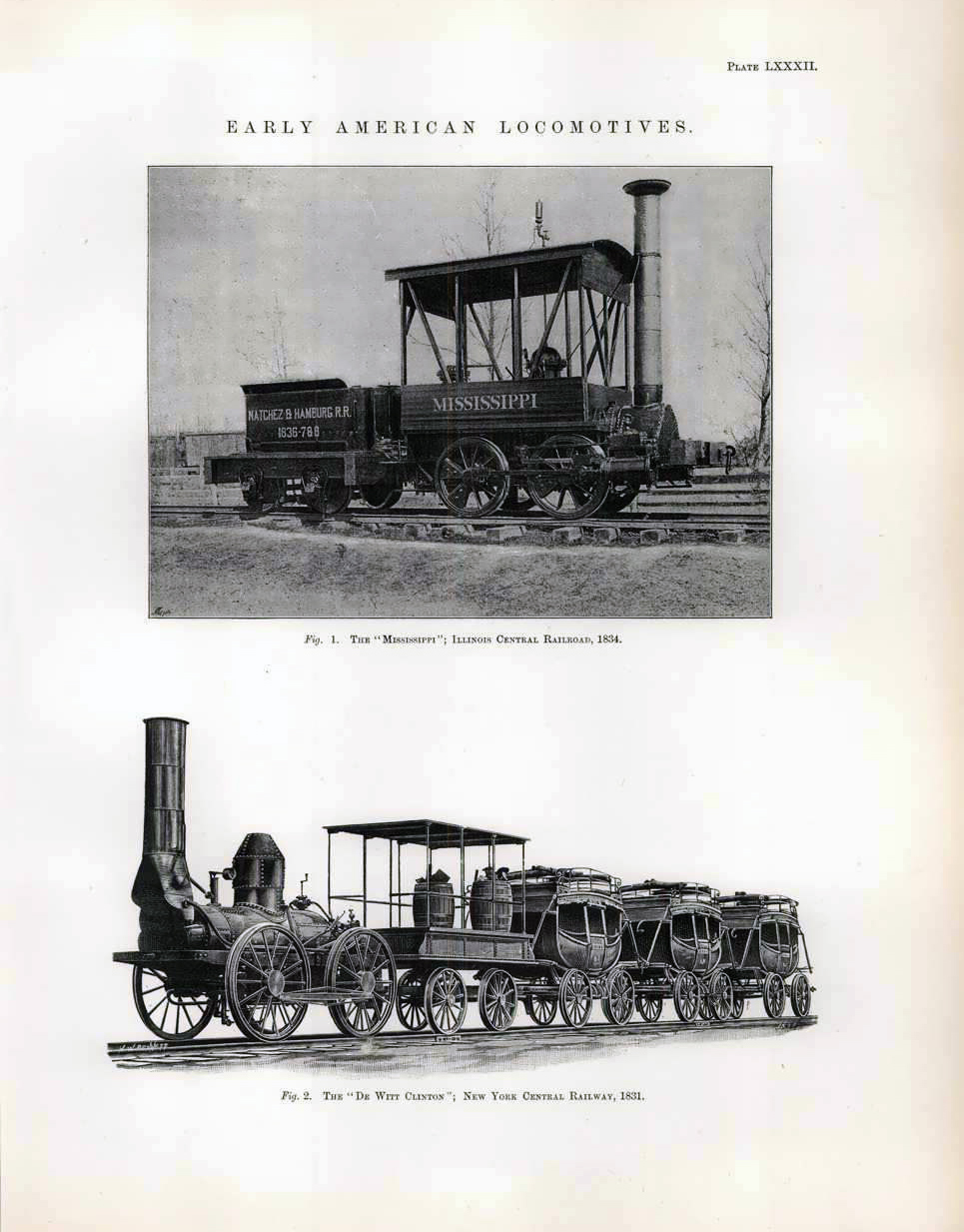 The D&H declined to use steam power despite the Lion proving its worthiness. Upon its inaugural run the DeWitt Clinton was able to complete the 16-mile journey between Albany and Schenectady in a record 38 minutes to the astonishment of its passengers.

A similar trip over the nearby Erie Canal required hours due to more than a dozen locks and a longer general route. The locomotive featured a design that became the standard for the future; a horizontal boiler with a horizontal smokestack ahead and an area behind where the engineer operated the contraption.

Of course, in those very early days things like cabs, pilots, and other later technologies had yet to be invented. The Clinton, however, did sport an early tender, essentially a small flatcar carriage where fuel was stored. 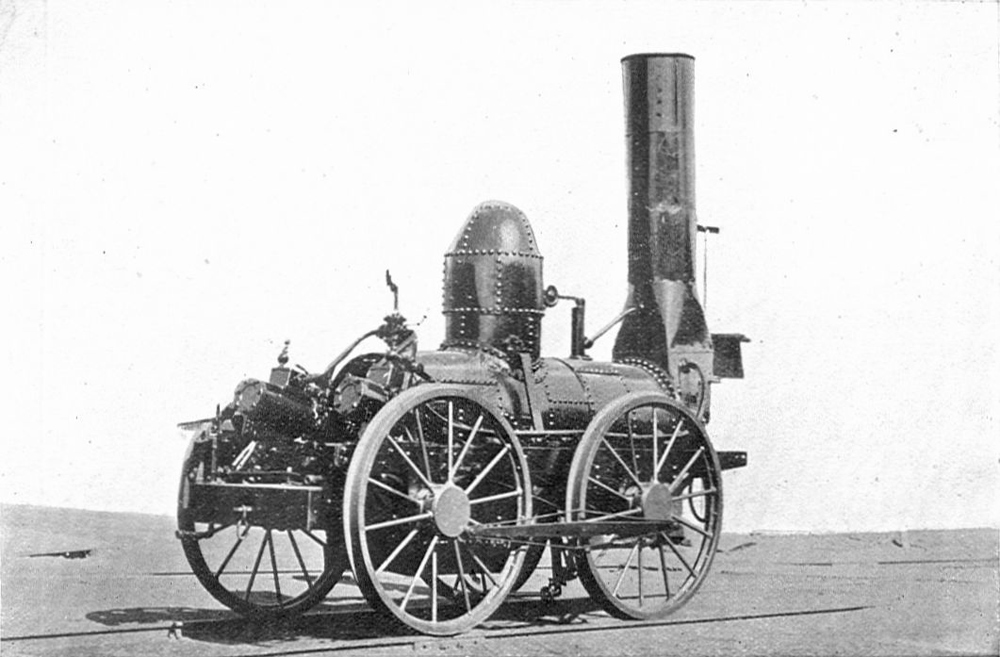 Additionally, it used a somewhat matching set of early passenger cars, which were basically customized horse carriages; patrons riding aboard would either be seated inside the cars or on rumble seats placed on the roofs.

The trip transpired without incident and the DeWitt Clinton remained in use on the M&H for only a few years before being scrapped by the railroad in 1833. However, a complete replica, including cars, was built by successor New York Central for the 1893 Columbian Exposition in Chicago which was entirely operational.

It was used by the railroad for on-an-off again promotional purposes until being purchased in 1934 by Henry Ford for his famed museum in Dearborn, Michigan, where it still resides to this day next to the behemoth Chesapeake & Ohio Class H-8 2-6-6-6 "Allegheny".