The train ran the famous Surf Line providing passengers with breathtaking views of the Pacific coast where the tracks in many cases lay right next to the beach!

Despite a trip requiring only a few hours, in usual Santa Fe panache the San Diegan was equipped with the best of services and carried swift running times.

It was never downgraded or cutback over the years although changes in motive power came from time to time.

While the Southern Pacific had the Los Angeles - San Francisco corridor locked up the Santa Fe was the best choice for rail travel through Southern California.

Today, the San Diegan's route is still in use by Amtrak, now known as the Pacific Surfliner, as the carrier stopped using the former name in 2000. 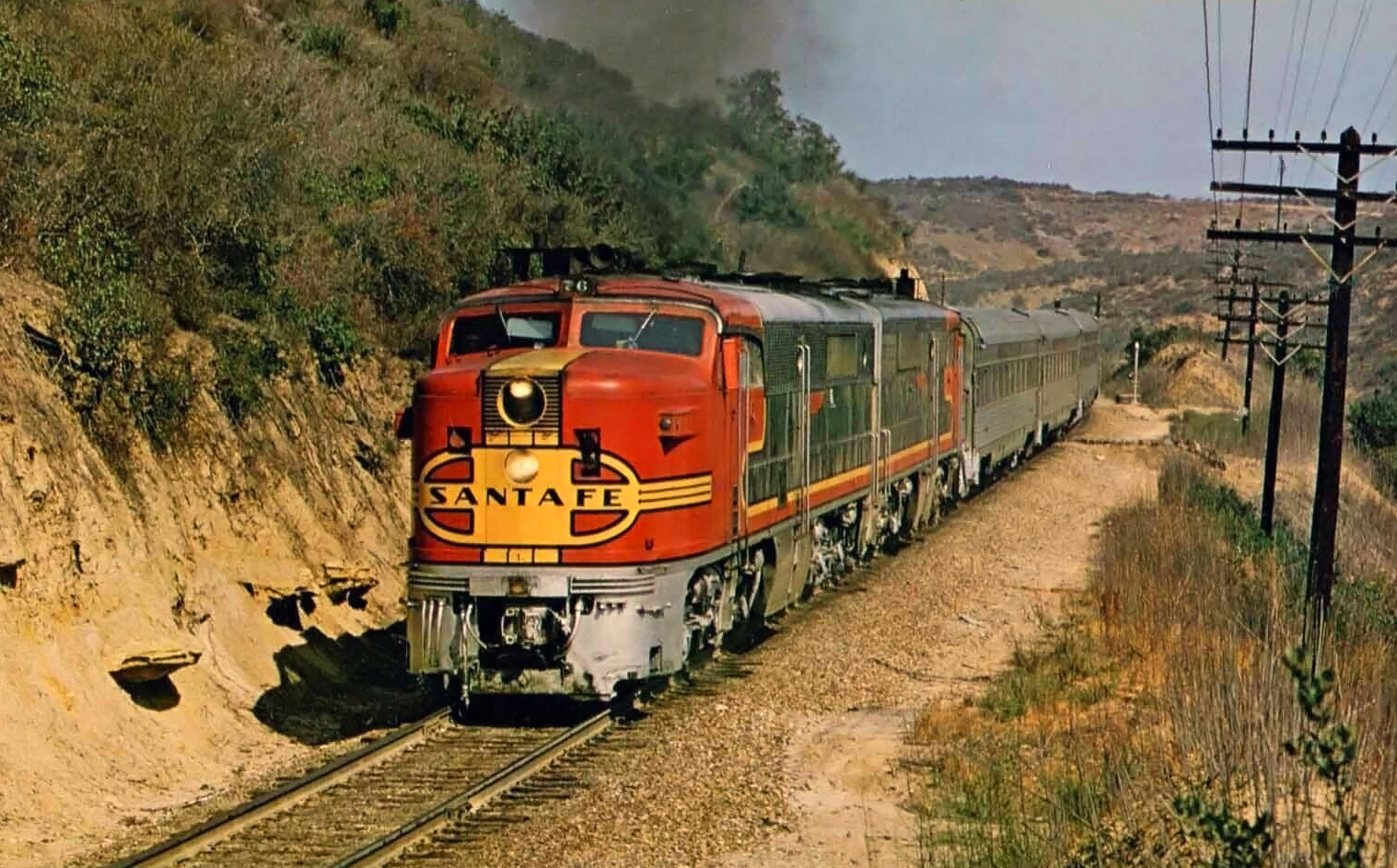 A pair of Santa Fe's venerable PA-1's have train #72, a southbound "San Diegan," nearing the summit of the Torrey Pines Grade at Miramar, California on the morning of June 27, 1964. Tom Gildersleeve photo.

During the spring of 1936 the Atchison, Topeka & Santa Fe joined the ranks of streamlined status when it launched the all new Super Chief that May.

This legendary name spearheaded a long list of popular names soon launched by the railroad such as the rechristened Chief, all-coach El Capitan, Kansas Cityan/Chicagoan, and regional San Diegan.

In later years the timetable included such names as the Texas Chief and San Francisco Chief.  In many ways the San Diegan never received the wide celebrity status of Southern Pacific's Daylights.

Perhaps that's because they were originally launched in 1937, a year prior to the Santa Fe inaugurating its regional service.  Whatever the case the AT&SF spared no expense in making sure its version was just as luxurious. 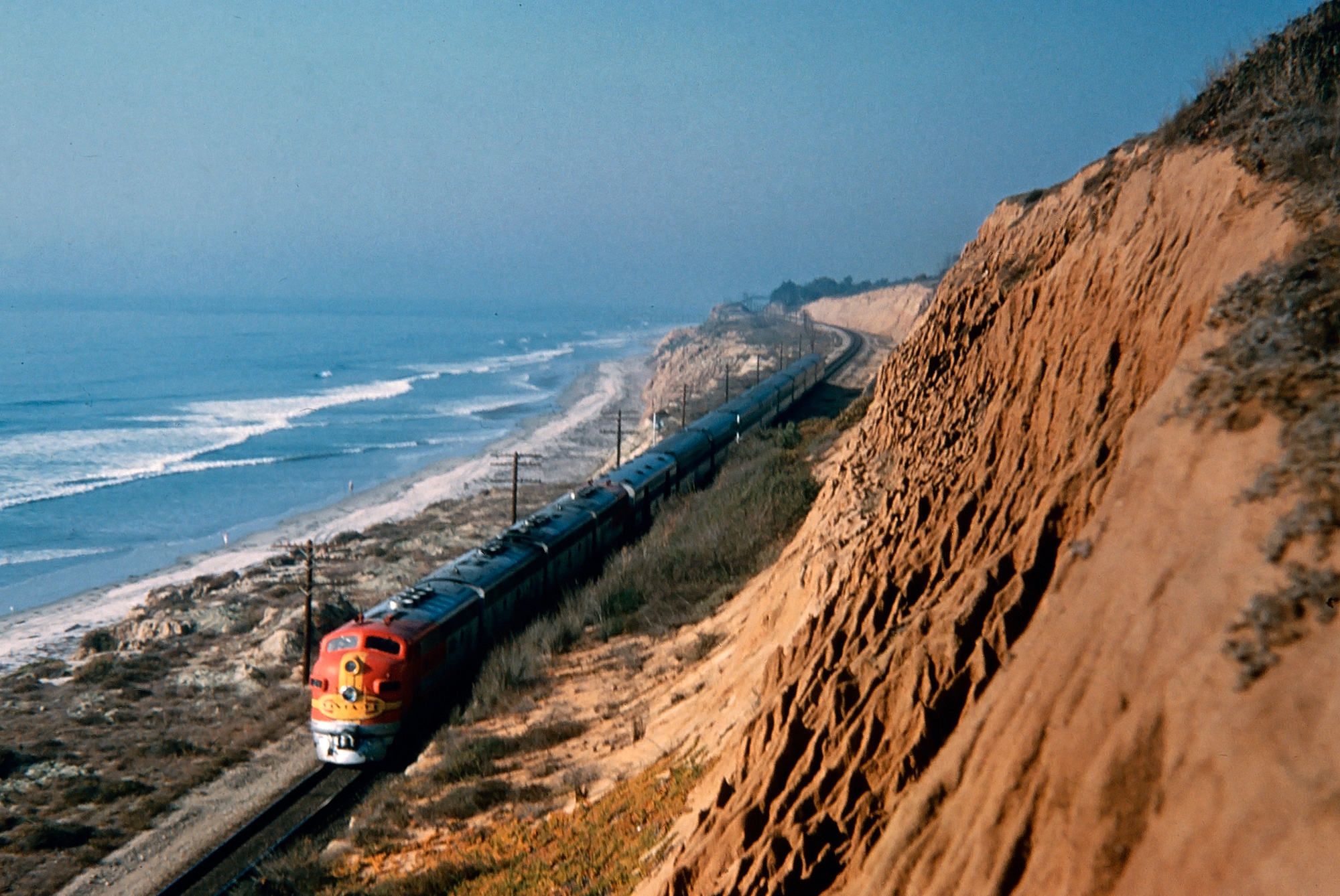 The train officially launched on March 27, 1938 offering a pair of trains running daily including #70 and #78 southbound along with #71 and #79 northbound.

According to Bill Yenne's, "Santa Fe Chiefs," the AT&SF offered no fewer than six departures every day in each direction with running times over the 128-mile route requiring 2 hours, 45 minutes. 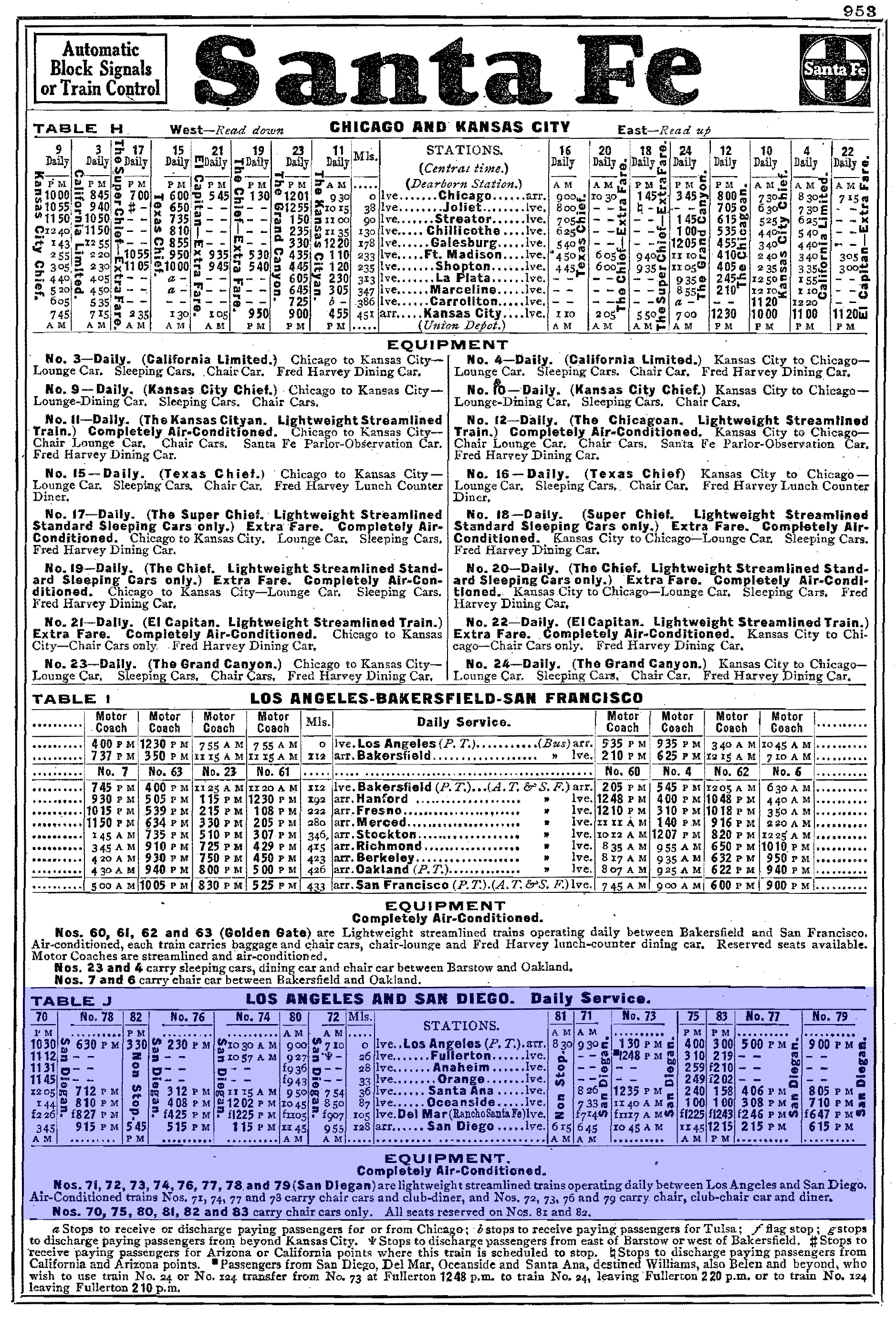 Additionally, the trains were timed to coincide with passengers traveling to or from the Super Chief and Chief that both called at Los Angeles while commuters had amble opportunity to catch the San Diegan on business with trains running all day from breakfast until the evening hours.

The residents of California living anywhere between the Bay Area and San Diego during that era were afforded what was likely the best regional rail travel found anywhere in the country with Espee's Daylights and Santa Fe's San Deigans to choose from (this arguably still holds true even today). 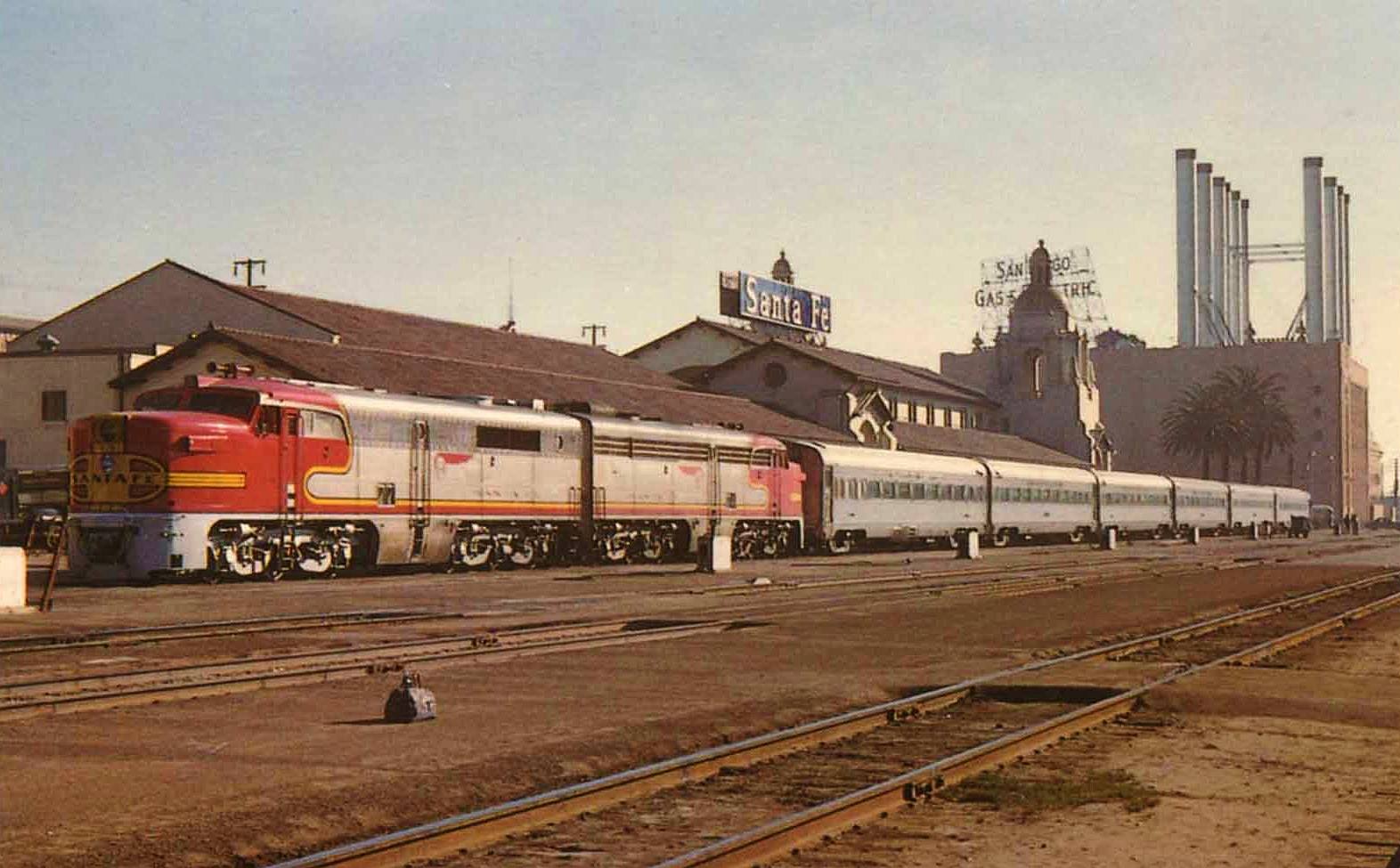 A pair of Santa Fe PA-1's are ready to depart San Diego with a regional "San Diegan" bound for Los Angeles in 1957. Mac Owen photo.

When inaugurated the train used new stainless-steel cars from the Budd Company, a builder the Santa Fe often turned to over the years for its fleet of lightweight equipment.

The consist included primarily coaches, a mail/express car, and round-ended lounge-observations (for light snack and beverage service) complete with a San Diegan drumhead.

During its early years steam power was fairly typical in the form of adept 3700-Class 4-8-4 Northerns.  However, as diesels arrived in ever-increasing numbers Electro-Motive F3s and F7s (a combined fleet that numbered in the several hundred, not including the hundreds of FTs the road rostered) could regularly be found on the head-end.

Along with these locomotives Alco's beautiful PA model, of which the Santa Fe owned a few dozen, were also occasionally given San Diegan assignments.

According to Patrick Dorin's book, "Santa Fe Passenger Trains In California: From the 1940s Thru Amtrak And More," by 1953 the AT&SF was dispatching four trains every day in each direction with southbound departures leaving Los Angeles Union Passenger Terminal just after 8 AM through nearly Midnight while northbounds left the railroad's gorgeous station in San Diego from 7 AM through 8 PM.

Incredibly, even by the 1ate 1960s the Santa Fe was still dispatching three trains in each direction, a time in which California's regional services were nearly a thing of the past.

For instance, by then the Southern Pacific was simply wanting out of the business and its legendary Daylights were virtually extinct.  Those famous trains may have endured in capturing our imagination throughout the years as some of the best regional trains ever launched but it was the Santa Fe's whose settings were the stuff of paintings. 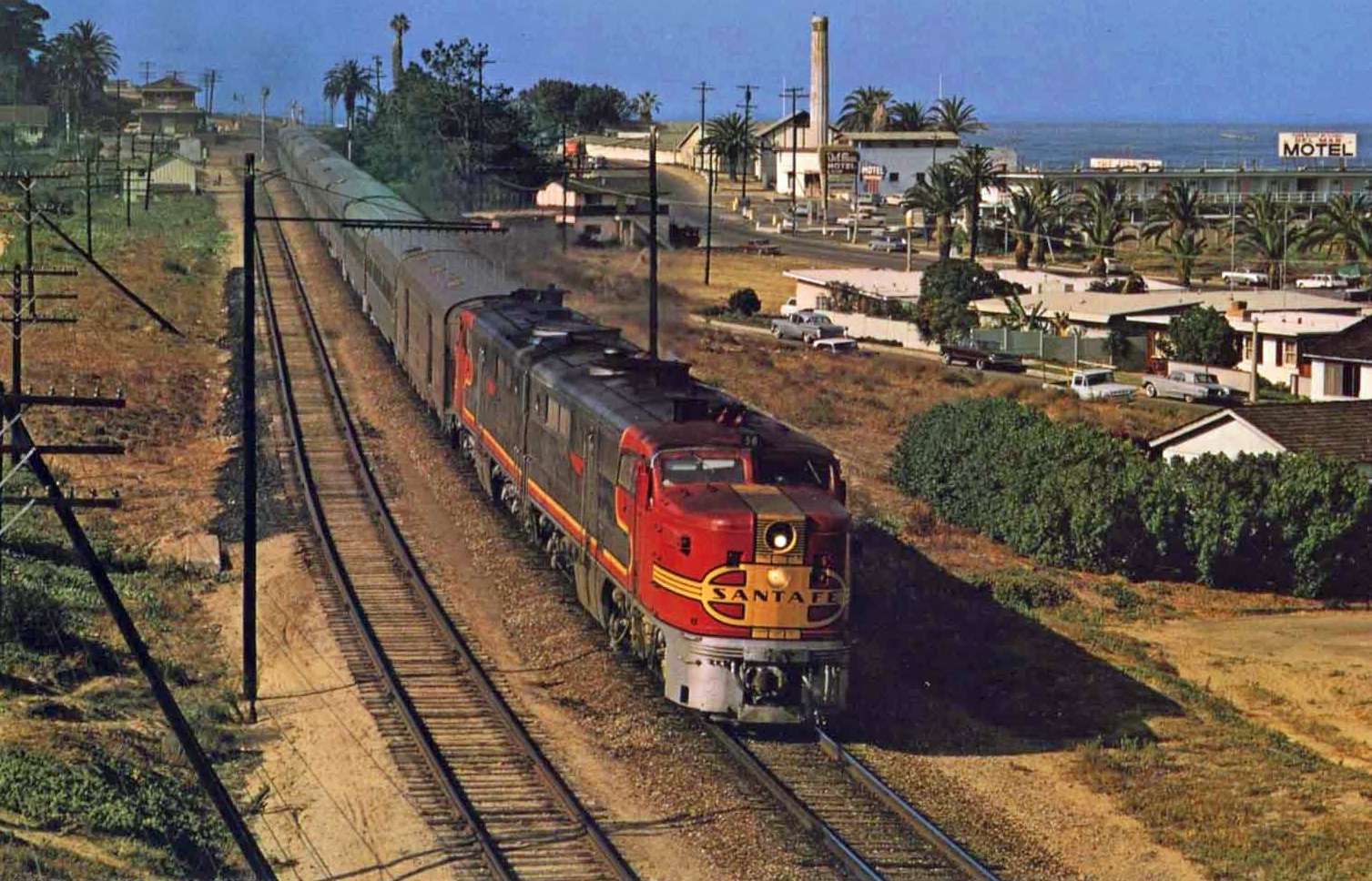 A pair of Santa Fe PA-1's hustle a "San Diegan" down the 2% grade at Linda Vista, California along the Surf Line on July 4, 1964. Tom Gildersleeve photo.

This was no more true than at San Diego where the depot, modeled in the Mission Revival style by architects Bakewell & Brown from San Francisco (which aimed to capture the Spanish heritage of the region), provided for breathtaking scenes of trains coming and going.

The station was one of the largest the railroad ever built at the time costing some $300,000 with a concourse spanning 650-feet long by 106-feet wide while the main waiting room was 170-feet long by 55-feet wide.  It opened on March 8, 1915 its signature feature was twin domes emblazoned with the Santa Fe logo.

In addition, big palms swayed in the breeze along the front of the building.  It truly spoke Southern California.  Before commercial construction partially ruined the skyline around and behind the station it offered wide-open vistas of the surrounding landscape where one could watch Warbonnets arrive with the latest San Diegan.

More than once artists have captured such scenes in oil, perhaps none more famous than John Winfield's piece depicting an E1A and 4-8-4 awaiting their evening departures.