The dining car's heritage can be traced back to the industry's earliest days.  However, as a stand-alone service the car joined did not find widespread use until the late 19th century, thanks to George Pullman's vision.

While this car was originally designed only to keep passengers happy during their long journey by train, this changed by the 20th century.

During the streamliner era many of the railroads' flagship trains like the Capitol Limited, Broadway Limited, Super Chief, City of Los Angeles, Empire Builder, and others were serving dishes that would rival the best five-star restaurants from coast-to-coast.

Dining aboard these trains became an experience into itself and many passengers rode their trains simply for the food!

Today, some of these dishes continue to be offered at restaurants or on certain excursion trains.  While Amtrak continued to serve prepared meals on board after its 1971 start-up, today that is no longer the case with the diner being replaced by snack cars and vending machines. 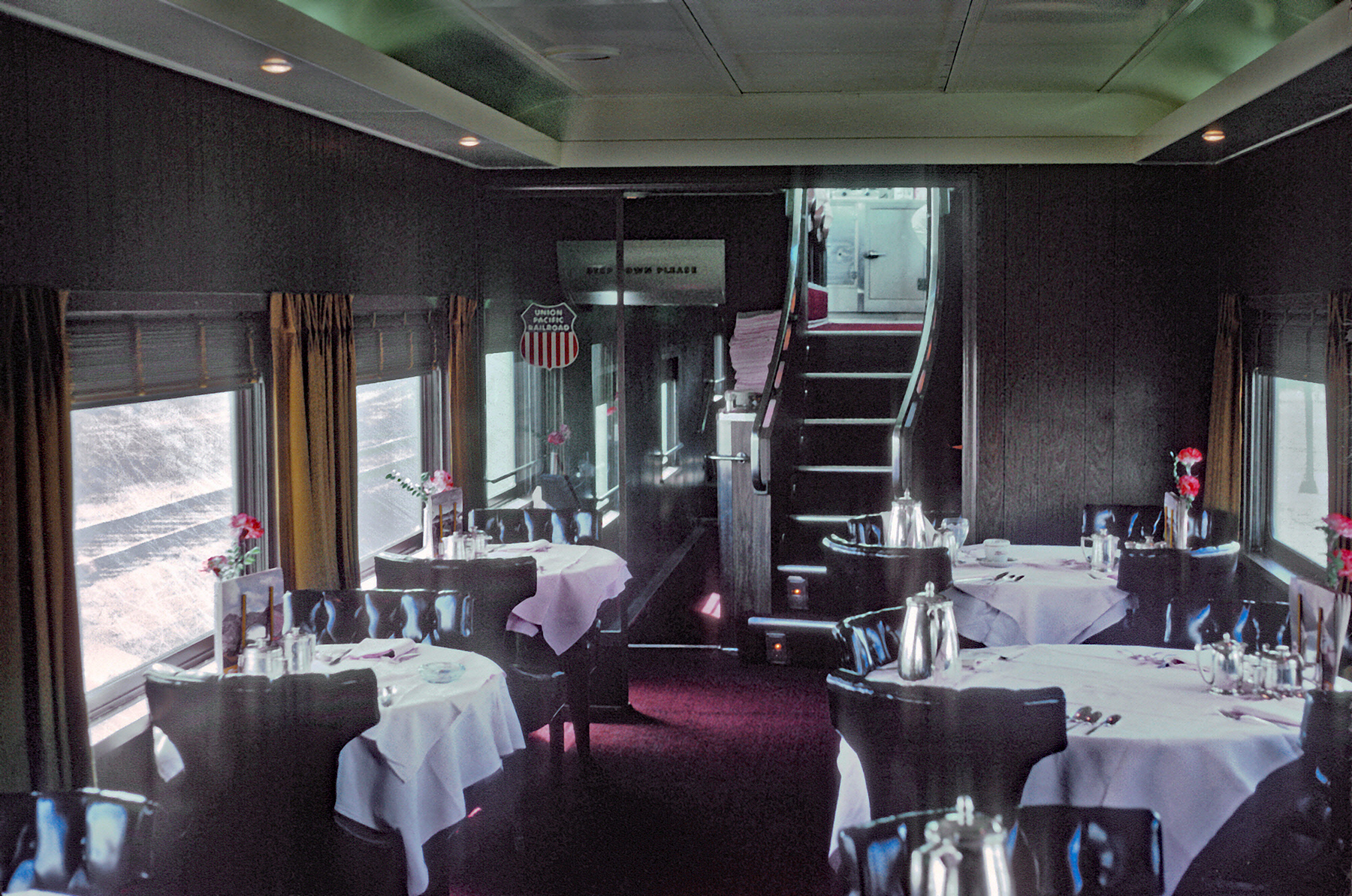 Roger Puta captured this interior view of one of Union Pacific's dome diners attached to the "City of Los Angeles" on May 21, 1970. Until the end UP offered top-notch service.

Interestingly, for years dining cars were not even part of passenger train consists. Prior to the late 19th century virtually no passenger train offered on board dining services.

To make up for this lack of service railroads would allow passenger to de-board during stops for water if there were nearby restaurants/roadhouses. Often, this food was sub-par, at best.

Because western railroads were built through some of the most sparsely populated areas of the United States, during the latter half of the 19th century it was they who first offered dedicated cars which offered dining services.

As John White, Jr. notes in his book, "The American Railroad Passenger Car (Part 1)," the diner was one of the very last cars to join the long-distance passenger train consist.

Its emergence is a stepped process that involved a series of events from the industry's earliest days until George Pullman finally unveiled the "Hotel Car" after the Civil War. 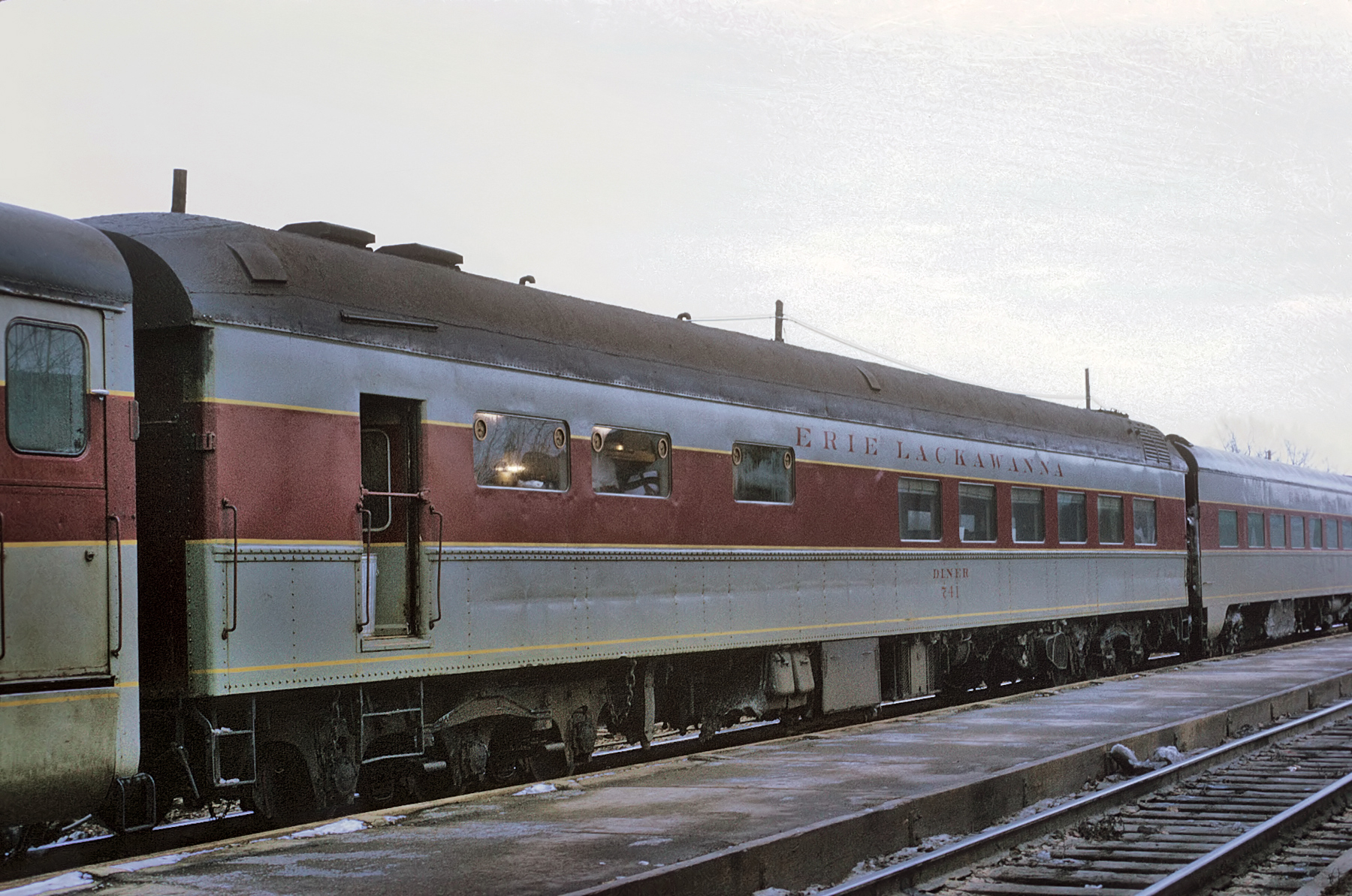 Ironically, the dining car was first spoken about before a single mile of railroad was ever built in the United States.

In 1819, Benjamin Dearborn a printer, industrialist, and inventor wrote in his 1819 memorial to the U.S. Congress that he believed a network of railroads should be constructed that offered the choice of on-board meals.

In 1835, less than a decade after America's first railroad was put into service (Granite Railway) and just a few years following the Baltimore & Ohio's inaugural run (America's first common-carrier), the Philadelphia & Columbia Railroad tested the Victory, an eight-wheel testbed car that was essentially the first buffet car.

Along with seating it contained a counter and shelves at one end for food service.  While meals were not prepared on-board they could at least be enjoyed during the trip.

When the first true sleeping car entered service in 1838 on the Philadelphia, Wilmington & Baltimore Railroad the media believe it was only a matter of time until a true dining car was to follow.

In January 1853, only weeks after the B&O opened its original main line to Wheeling, Virginia the railroad offered "refreshment cars" during the initial runs.

These are just a few of the examples of the initial concepts related to on-board food service.  Unfortunately, for whatever reason, they were isolated incidents that were not repeated on an industry-wide scale.

It is somewhat ironic considering the ties food held with long-distance travel. It was George Pullman, who sought to fill a void in rail travel comfort (first-class sleeping accommodations) which led to the first true dining car, the "Delmonico" unveiled in 1868.

The so-called "Hotel Car" eventually led to a network of some 1,700 diners in service during the height of rail travel.

From the earliest designs the layout of dining cars have remained relatively unchanged.

By the time of the streamliner era dining cars became a unique experience aboard some trains, even outside of the food.

For instance, on board the Union Pacific's City fleet of passenger trains (the City of Los Angeles, City of Portland, City of San Francisco, City of Denver, City of St. Louis, and City of Salina) the railroad offered domed dining cars with the seating located in the upper domed area of the for breathtaking views of the passing countryside while enjoying your meal.

And, of course, the dining itself during the peak of the passenger train travel in the streamliner era was legendary aboard some trains.

It is said that the meals offered on the PRR's Broadway Limited and NYC's 20th Century Limited rivaled, and perhaps outmatched, those found in the finest restaurants of New York City at the time.

On the Baltimore & Ohio the food was so exemplary, even up until the beginning of Amtrak, that the railroad found many passengers returning simply for the meals (an experience which many who rode the B&O remember fondly to this day).

Interestingly, the Santa Fe was one of the last major railroads to hold out in offering on board dining car services.

Instead, located along its Chicago-Los Angeles main line were what was known as "Harvey Houses", essentially restaurants catering mostly just to passenger train patrons. The food offered at these establishments was second-to-none and their legend remains even today.

However, when the AT&SF did finally decide to offer dining cars as part of its passenger train consists it constituted only the best of services.

The car, which was part of the famed Super Chief, used authentic Native American (many of which depicted the Navajo) colors (such as turquoise and copper), patterns, and even authentic murals and paintings in the train.

Other interior designs included rare and exotic woods like ebony, teak, satinwood, bubinga, maccassar, and ribbon primavera for trim through the train giving the Super Chief an added touch of one-of-a-kind elegance.

When Amtrak began operations in 1971 it also offered prepared meals aboard dining cars for years. However, by the late 1990s the national passenger carrier decided to forgo this service and replace it with snack cars and vending machines, a decision quite disappointing to passengers and patrons.

Today, however, you can still treat yourself to real, prepared meals aboard trains if you visit one of the many tourist lines around the country.  In addition, Amtrak has brought back dining services on some trains.

Some of the more well known such railroads offering these services include the Grand Canyon Railway, Napa Valley Wine Train, and Strasburg Railroad.