The Dakota 400 was one of the many secondary 400s the Chicago & North Western operated following the success of its initial version launched in the 1930s.  The train was part of the late addition to the railroad's fleet, launched after World War II.

It became C&NW's longest '400' in terms of length, spanning more than 600 miles running from Chicago to the western edge of the railroad's system in South Dakota.

As a result it was the only '400' to carry sleeper service, which persisted nearly until the train was discontinued in 1963.

The Dakota often isn't regarded as one of the C&NW's more successful within the fleet but nevertheless provided quality service for many years until the railroad was forced to initiate cutbacks as patronage declined. 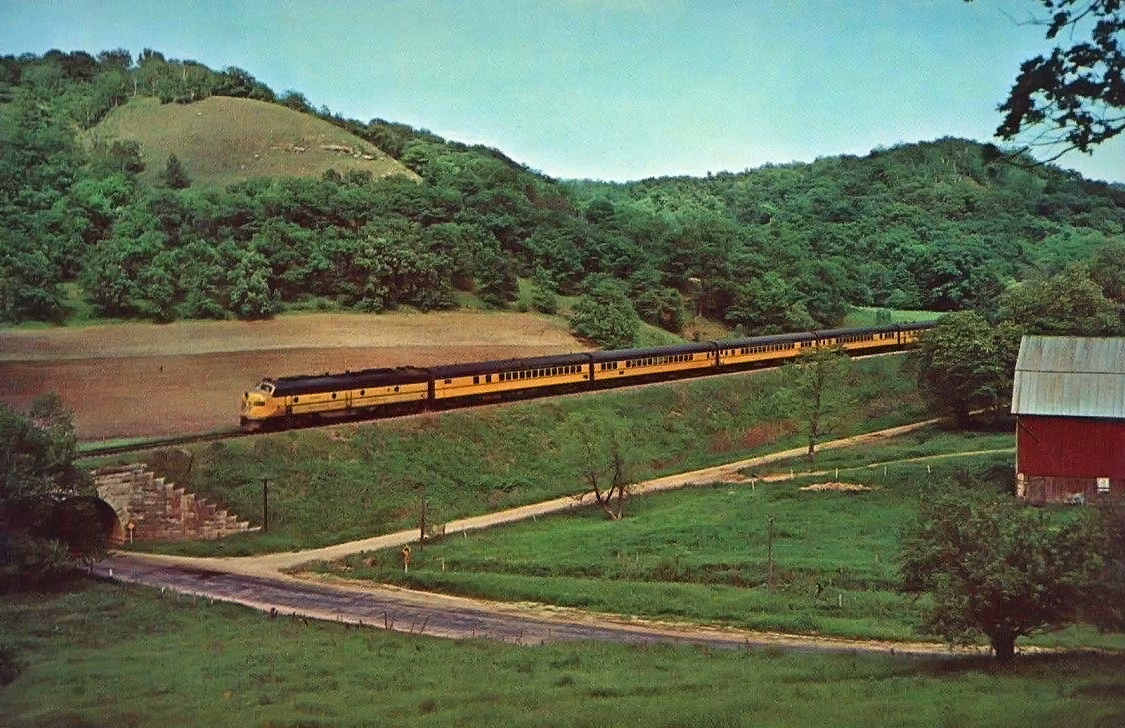 A Chicago & North Western E8A has train #519, the westbound "Dakota 400," as it passes a rural farm near Wilton, Wisconsin in July of 1956. This stretch of track has since been abandoned. Don Smith photo.

Curiously, this train was not streamlined at first as the railroad was fighting through bankruptcy and lacked the necessary funding to purchase new lightweight and diesel-powered equipment.

Nevertheless, thanks to the 'North Western's route that bypassed major population areas the train offered fast running times.  The '400' also had a brief advantage as the first high-speed service between Chicago and the Twin Cities.

Within four months, however, the Burlington had launched its Twin Cities Zephyr followed soon after by the Milwaukee Road's Hiawatha.  Both of these trains were sleek, colorful, and just as fast leaving the C&NW in a hotly contested market.

The 400 was finally streamlined during 1939 thanks to more than $2 million in funds allocated by C&NW's bankruptcy court, which included lightweight cars from Pullman-Standard and streamlined diesels from Electro-Motive.  According to the railroad this initiative ,"would bring the first streamlined and the first diesels into the 'northern territory' of the railway and on subsidiary Omaha Road."

The train sported a beautiful livery of green and yellow, which harkened back to the days of the old New North Western Limited inaugurated in 1912.  This paint scheme became the C&NW's standard and later featured on freight locomotives and cars.  A few years following the relaunch of the lightweight '400' the 'North Western continued adding to its streamliner fleet. 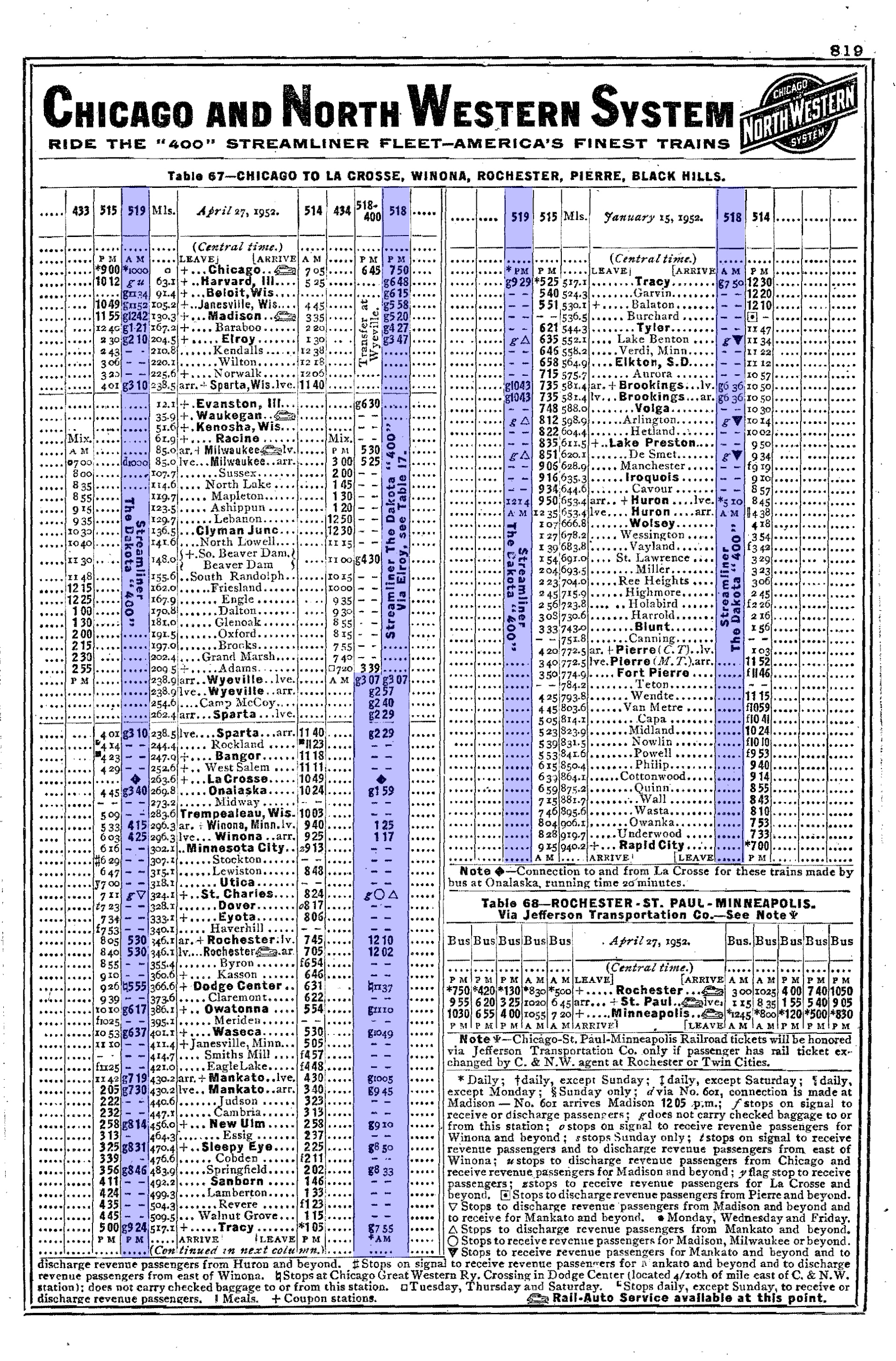 This resulted in the original train being renamed as the Twin Cities '400'.  During 1950 more '400s' were added to the timetable including the Dakota '400', which debuted on April 30th that year connecting Chicago with Huron, South Dakota running via Madison and Rochester, Minnesota.

Since most of the C&NW's '400s' were regional dayliners, sleeper service was not required.  However, since the Dakota (listed as train #518 and #519) traveled nearly 650 miles Pullmans were provided aboard train. 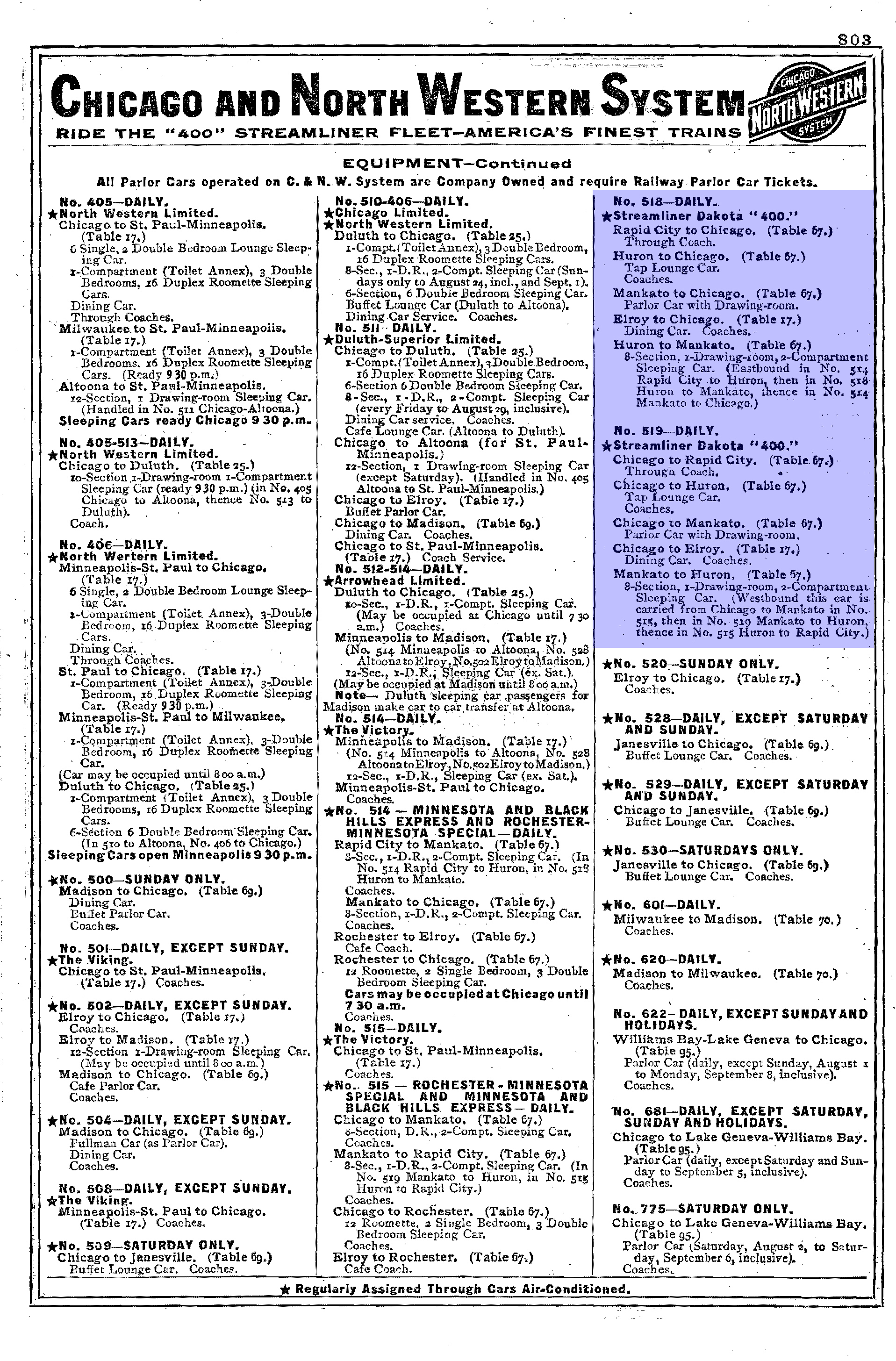 When the Dakota was launched it was powered by a pair of Electro-Motive E7A diesels.  However, after just a few months in service the 'North Western upgraded the train to run with a single, brand new E8A that summer.

As time passed the Dakota slowly picked up additional streamlined equipment, including coaches during April of 1952.  In October of 1955 the train was extended to the western fringes of the C&NW system reaching Rapid City, South Dakota.

As the decade wore on the railroad realized that maintaining such a large number of '400s' was becoming counterproductive and a significant drain on resources as the public left the rails for automobiles and the airlines.

In 1958 the C&NW was able to eliminate 14 money-losing trains in Wisconsin thanks to the introduction of Bi-level cars and the '400' fleet was shuffled to help reduce losses.  This included the Dakota '400' which was cutback to Mankota, Minnesota during 1960 and renamed the Rochester '400.'

The train's consist during its final years normally included an E8A locomotive, a pair of coaches, an American Car & Foundry diner lounge, and a parlor.  Note that by this date sleeper service had been discontinued.  As patronage continued to slip the C&NW pulled the plug on the train, discontinuing it after July 23, 1963.

The remaining '400s' did not fair much better.  During the late 1960s the C&NW ended the '400' name altogether following the discontinuance of the Peninsula '400' during July of 1969, choosing instead to call its remaining trains as merely streamliners.

This was even promoted in the railroad's marketing dubbing itself as "Route Of The Streamliner" (such statements were also emblazoned on freight locomotives).

When Amtrak took over intercity passenger services on May 1, 1971 the C&NW had two non-commuter schedules still operating on its timetable serving Chicago - Green Bay and Chicago - Clinton, Iowa.  Unfortunately, neither of these were continued and the carrier did not revive the '400' name on any of its trains.