In recent years the Downeaster has been one of Amtrak's top performing regional trains with demand growing at a rapid pace.

The train was first inaugurated in the early 2000s as a service connecting the cities of Boston and Portland (Maine), skirting the northern Atlantic coast much of the way.

The history of the route dates back to the historic Boston & Maine Railroad, which provided many regional services between the two cities with names like the Pine Tree, State of Maine, and Kennebec.

However, the name itself was used by neighbor Maine Central. Services on the 100+ mile corridor are primarily light, with little more than coach service provided.

It is one of the few trains outside of North Carolina and California that sports its own livery and logo (Amtrak-inspired, of course), due to the fact that it is partially sponsored by the state of Maine.

The future for the train looks very bright and new services are hoped to be added including high speed operations. 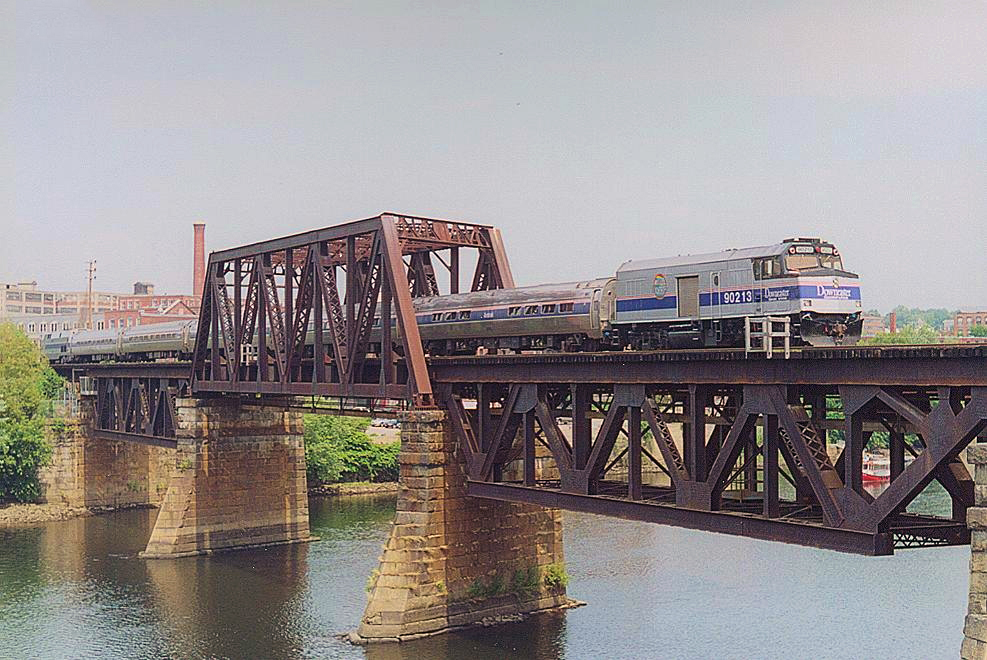 Long before there was the National Railroad Passenger Corporation, Amtrak, virtually all of the New England passenger services north of Boston were handled principally by the Boston & Maine, as well as rival Maine Central.

The two systems, while competitors, worked in conjunction to provide connections with many of the same trains from those mentioned to others like the Gull (Boston-Nova Scotia), and the Mountianeer (Boston-Littleton, New Hampshire).

Their most famous train was the streamlined Flying Yankee; operated between Boston and Bangor it was a spinoff of the Burlington's popular Zephyr trainsets built by the Budd Company.

The Boston & Maine also once operated quite a fleet of named passenger trains, three of which were streamlined in 1947 with new, lightweight stainless-steel equipment from Pullman-Standard (the above-mentioned Pine Tree, Kennebec, and upgraded Flying Yankee).

Interestingly, the Maine Central's Down Easter (as spelled by the railroad) revived by Amtrak was not the company's flagship run.

The train served New York and, oddly, connections to both coastal Rockland and inland Waterville. It was never streamlined but operated as a heavyweight run.

The MEC's top-notch train, outside of its B&M connections, was the Bar Harbor Express, a seasonal service from Washington, D.C. to Ellsworth, Maine that was popular with vacationers (the train provide full Pullman services and private cars for patrons).

Due to the geographic location in which both the MEC and B&M were located, demand for passenger trains quickly declined as highways and automobiles became more reliable and affordable, especially after World War II.

As such, as early as the 1950s both began to seriously cutback their services. Then, in 1960 the MEC got out of the business altogether after slowly cutting back the previous decade.

For the B&M, which had a much more substantial business complete discontinuance took a bit longer. Just 10 years after purchasing new equipment it became disinterested in passenger service and sold much of it to various railroads.

In 1966 the railroad pulled all of its remaining intercity passenger services from the timetable, save for its commuter services which survived for some years longer.

From that point forward until Amtrak was inaugurated the revived Downeaster on December 15, 2001 Maine was without passenger trains.

The earliest beginnings of the train can be traced with the formation of the Northern New England Passenger Rail Authority (NNEPRA) in 1995, created by the state of Maine, to manage and oversee future passenger rail service within the state.

After six years it was able to inaugurate the train between Portland and Boston thanks to partial subsidization from Maine with an agreement in place for Amtrak to operate the train for 20 years.

In addition freight railroad Pan Am Railways and commuter line Massachusetts Bay Transportation Authority (MBTA) have allowed the use of their lines for the train. Overall, the route is 116 miles in length with ten station stops currently available for passengers.

Because of the short distance of the corridor the Downeaster can complete five round trips daily, requiring about two hours per trip, with top speeds of 79 mph (train numbers include 680-699).

Power for the train is typically provided by a standard GE P42DC and a rebuilt EMD F40PH as a cab car (for push-pull service, it also doubles as a baggage compartment), while equipment consists of Amfleet cars that offer both coach and business class accommodations.

Also, the train includes café service (a snack car) and even allows bicycles to be transported. Finally, Wi-Fi service (free Internet) is available on all trains.

The future of the train does not seem to be in doubt considering that in 2011 ridership broke 500,000 and the state of Maine plans to extend the route northward to Freeport and Brunswick before the end of 2012 (with funding already approved, Pan Am is working to upgrade the line for passenger service).