The Duplex Drive was a fascinating step forward in steam locomotive technology first employed on the Baltimore & Ohio during the 1930s but made famous by the Pennsylvania Railroad's experimentation of several different wheel arrangements, the best known of which was the Class T-1 4-4-4-4s.

The design has, unfortunately, received a rather bad rap in historical texts and books which claim it was flawed and unsuccessful.

In reality, the locomotives, at least many of those put into service performed quite well if operated properly.  Unfortunately, in the end the Duplex was put to pasture by the growing technology of the diesel locomotive that halted further development.

In many ways it was superior to the diesel but simply could not match its maintenance advantage, as was the case with all steamers.  Sadly, none of these interesting locomotives survive today.

The history of Duplex Drive technology can be traced back to France in the 1860s although its use in the United States was not seen until May of 1937 when the Baltimore & Ohio built its one and only example, Class N-1 #5600. 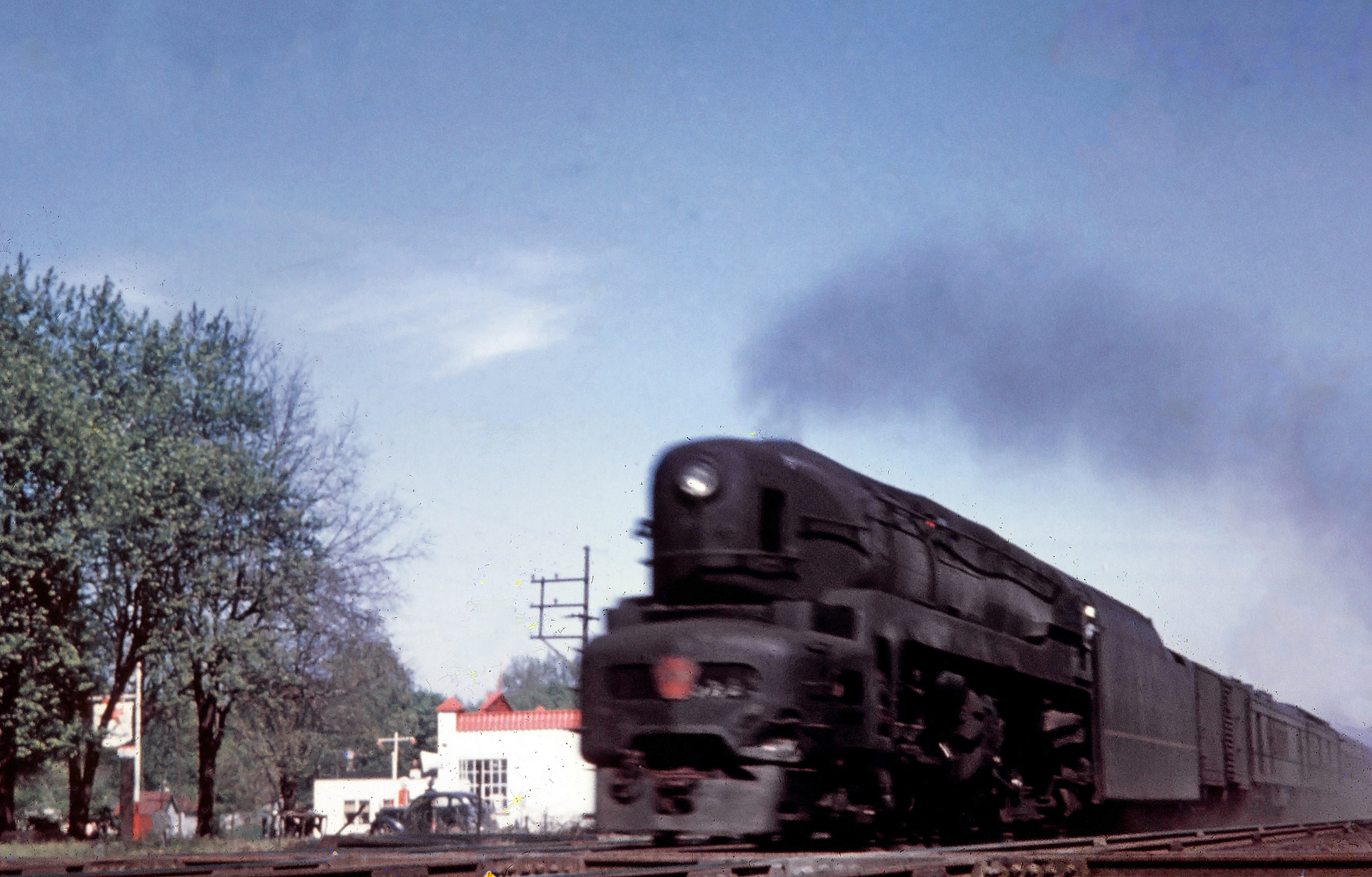 Interestingly, the Baldwin Locomotive Works, the top steam locomotive manufacturer of the era, attempted to assist the B&O in its development of the Duplex but the railroad rejected the help and instead turned to its chief of motive power, George Emerson, to design the locomotive.

Named after Emerson the #5600 featured a 4-4-4-4 wheel arrangement and was built in the B&O's famed Mount Clare Shops in Baltimore.  The locomotive never performed as the railroad had hoped as its firebox and cylinders proved to be too small.

Additionally, because the firebox was so close to the cylinders it created problems with heat and dirt/dust.  Dissatisfied with its one experimental example the B&O pulled the #5600 from service in 1943 although it was not scrapped until 1950.

The idea behind a Duplex Drive is one in which the locomotive's main set of drivers is split into two groups while still being mounted under a single frame.  The design is considered neither an articulated nor a Mallet for this reason.

The purpose of a Duplex is, of course, to achieve more power and speed by having cylinders placed on two pair of drivers instead of a larger set.  For instance, by doing so a standard, 4-8-4 "Northern" would be reclassed as a 4-4-4-4.  This setup also provided for better stability and balance.

The Duplex Drive was not without its problems, however, as the B&O found out.  While the B&O was able to keep the overall wheelbase length of its #5600 to 89 feet, roughly the same as its Class T 4-8-2 Mountains, the railroad's trade-off was to utilize a smaller firebox and cylinders as mentioned above.

When the Pennsylvania Railroad began experimenting with Duplex technology a few years later it got around this problem by lengthening the wheelbase.  In 1939 the PRR displayed Class S-1 6-4-4-6 #6100 at the New York Worlds Fair that featured streamlining from noted industrial designer Raymond Loewy.

Unlike the B&O, the Pennsy worked with Baldwin in developing this Duplex and this collaboration seems to have paid off in big ways (at least in terms of operational success).

The design of the S-1 featured a longer wheelbase to fully accommodate the extra set of cylinders and the locomotive was incredibly powerful, capable of pulling a 1,200-ton train at 100 mph!

Unfortunately, its size and weight also proved very problematic.  The #6100 was so long at 140.5 feet and weight of 530 tons (or more than 1,000,000 pounds) that none of the Pennsy's facilities could handle the behemoth save for the main line between Crestline, Ohio and Chicago. 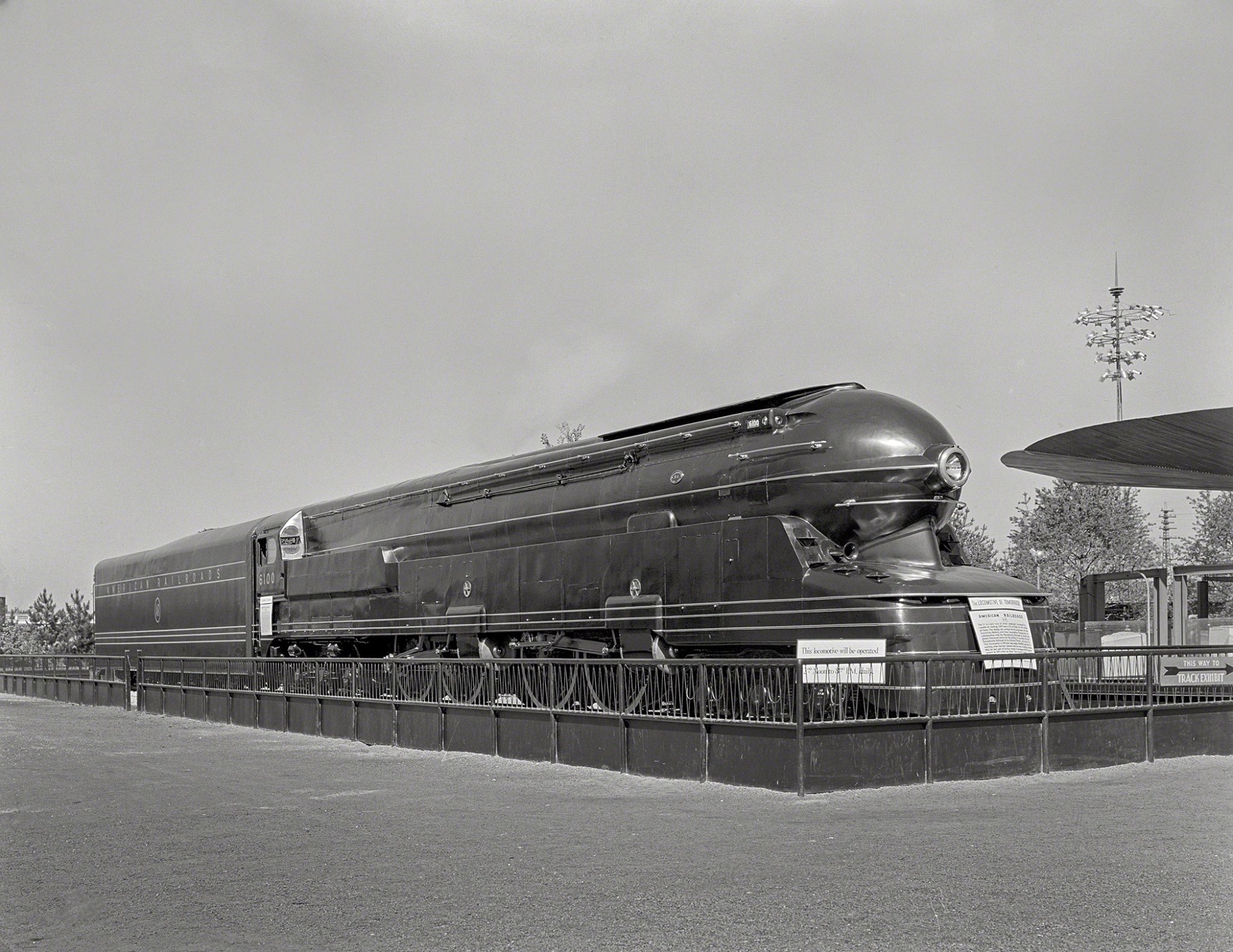 Pennsylvania Railroad Class S-1 "Duplex Drive" 6-4-4-6 #6100 on display at the New York World's Fair on July 19, 1939. The sign on the pilot reads, "The Locomotive Of Tomorrow." Negative by Gottscho-Schleisner.

As SteamLocomotive.com points out to really understand the S-1's size, compare it to Union Pacific's 4-8-8-4 Big Boy at only 132 feet or the 4-6-6-4 Challengers at roughly 120 feet  (and both of these designs were articulated!).

The performance of the S-1 was never an issue but its incredible length eventually led to its retirement in 1944.  Still, the locomotive turned out to be quite popular with the public and the PRR used as it a  learning tool for its next Duplex design.

In 1942 the Pennsy took delivery of its first Class T-1 4-4-4-4s from Baldwin numbered 6110-6111.  These two gigantic locomotives were again streamlined by Raymond Loewy with bullet-like shrouding.

With these first T-1s it is said that Pennsy allowed Baldwin complete autonomy in designing them with the only specifications being that Belpaire fireboxes and Franklin poppet valve gear must be used in their construction.

Overall, the railroad was happy enough with the performance of #6110-6111 that it continued developing Duplex Drive technology with Baldwin.

Also in 1942 the PRR took delivery of its only Class Q-1 Duplex, 4-6-4-4 #6130.  This variation turned out to be less than ideal due to issues with the rear set of cylinders, which tended to pick up a lot of dirt and dust from a firebox that was too small (similar to the issues experienced with the B&O's #5600).

Between 1944 and 1946 the railroad took delivery of its final two classes of Duplexes.  First, it began receiving its Class Q-2 4-4-6-4s that turned out to be the most powerful non-articulated steamers ever built with tractive efforts surpassing an amazing 100,000 pounds!  The PRR rostered 26 of these locomotives in all, #6131 and #6175-6199.

As SteamLocomotive.com points out, however, the growing acceptance of diesels as main line power and high maintenance issues eventually ended further development of the Class Q-2s and all were retired before 1950.

Finally, the Pennsylvania received its secondary order of Class T-1s from Baldwin between 1945-1946 numbered 5500-5549.  This batch turned out to be somewhat troublesome for the railroad, such as the high-maintenance of its poppet valves.

Still, despite what is often stated in books and other historical texts, it is said that the T-1s and virtually all of the Pennsy's Duplex Drive locomotives were efficient and powerful machines if one knew how to operate them properly.

For instance, text's states that the steamers were prone to severe wheel slippage even when at-speed although direct quotes from engineers stated that this was not a problem if proper applications of throttle and sand were used.

In the end, had further development of the Duplex taken place and the diesel not arrived when it did there is strong evidence that the design would have gained a probable level of acceptance by railroads in main line applications.