While there have been technological improvements to diesels since the 1930s the application of dynamic braking since that time has been the same; a locomotive's traction motors are used  to assist in slowing a train when either negotiating a steep grade or for whatever means necessary.

This idea was first put into practice with Electro-Motive's earliest cab designs and became an instant success since it vastly improved safety.

As locomotives have become larger and more powerful over the years dynamics have likewise improved.  This was especially true when EMD unveiled its version of the road-switcher in the late 1940s, the GP7, designed primarily for freight service.

During an era when the concept was still new and not entirely proven, most manufacturers offered first-generation models with the option of dynamics.  Today, however, they are virtually standard on all new locomotives and have become practically as common as the air-brake. 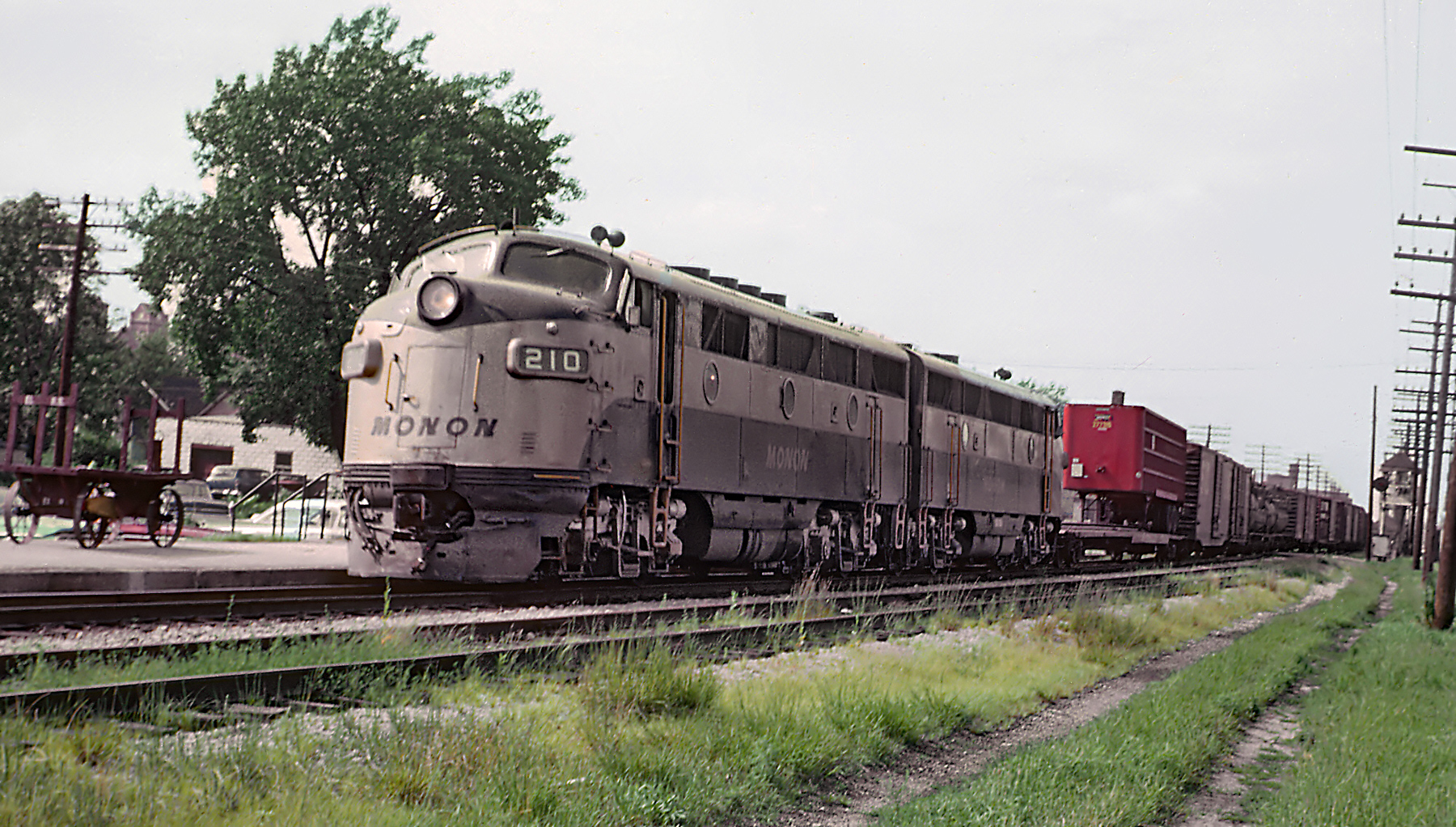 A pair of Monon F3's are southbound near Hohman Avenue in Hammond, Indiana with a long freight train on a September evening in 1963. In Electro-Motive's early covered wagons like these the dynamic brake equipment cannot be easily seen, nearly blending in with the carbody. Roger Puta photo.

The concept of dynamic braking is totally in the realm of diesel locomotives, nothing of the sort was a remote possibility with steam power since it did not utilize any type of electrically operated equipment as a means to generate forward motion.

The first dynamics were available on the initial line of diesels, Electro-Motive's revolutionary FT cab model.  During its six-year production run the design sold more than 1,000 examples although, interestingly, back in that era dynamics were not universally accepted as a standard feature.

Instead, many lines only purchased units with dynamics if they were operating in mountainous territory (such as the Pennsylvania) and some roads which did not have significant grades of any kind simply didn't order the feature at all such as the Soo Line or Florida East Coast.

An Overview Of Diesel Locomotives

A History Of Railroads 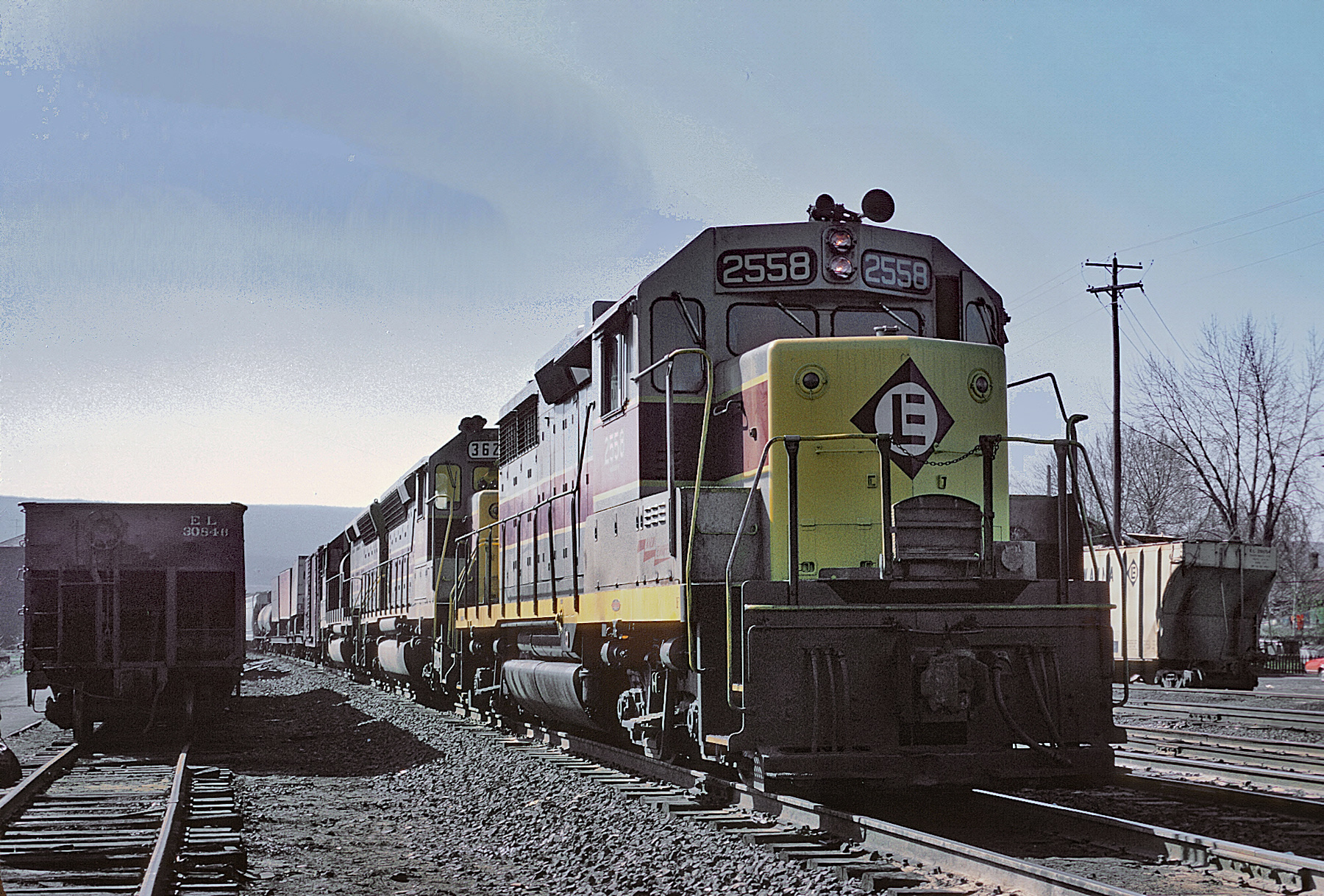 By the second-generation era dynamic braking was standard on virtually all models. Here, an Erie Lackawanna GP35 and a pair of SD45's lead their freight westbound along the ex-Erie main line at Port Jarvis, New York on March 25, 1970. This town was once the location of a major Erie/EL yard, much of which has since been removed. Roger Puta photo.

Additionally, others didn't feel the need to operate dynamics on passenger trains, which normally did not require such features.  In any event, railroads were still impressed with dynamic braking and its advantages.

The concept is completely oblivious to bystanders and works whereby the electricity flowing to the locomotive's traction motors is reversed turning them into generators through the rotation of the wheels.  If you are standing trackside and they are engaged a noticeable humming can be heard.

In other words, instead of electricity powering the motors they actually create it which causes them to resist rotation. This works by the prime mover becoming disconnected from the traction motors and then resistors are switched on.

As a result the force of the spinning wheels cause the motors to generate electricity, which creates enormous amounts of heat that must dissipated via resistors and gigantic fans located on the locomotive's roof. 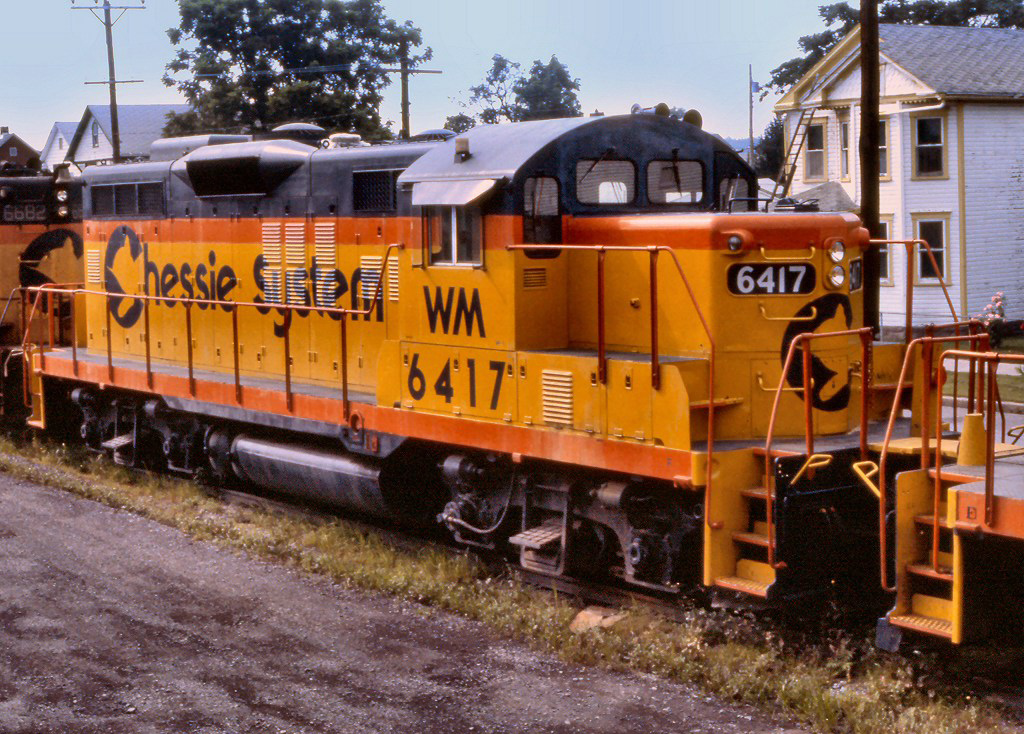 Chop-nose Western Maryland GP9 #6417 at Cumberland, Maryland during August of 1982. This early Geep shows where EMD once placed its dynamics, towards the center of the carbody noted by the bulge along the roof-line. Rob Kitchen photos.

Up in the cab the engineer has an eight-notch "d.b." (short for dynamic brake) controller, not unlike that of the throttle.  The higher this is set the greater amount of electricity the traction motors are asked to make, which further retards the train's speed.

While dynamic braking (which can be engaged as low as 6 mph) does help control a train, whether that be a heavy freight or otherwise, it is only an added safety measure in doing so and is not a replacement to air or pneumatic braking.

As the development of the diesel progressed through the 1960s and second-generation power was unveiled railroads began purchasing "d.b." units in greater numbers, shedding the original notion of utilizing them only in mountainous territory.

This was due primarily for greater operational flexibility by allowing power to roam the system wherever it was needed instead of being restricted to a particular region.

The original concept of dynamic braking was first pioneered years earlier with electric locomotives, which became a common form of road power during the late 19th and early 20th centuries.

Electrics utilized what was known as regenerative braking, which worked very similar to dynamics.  However, it was much more efficient; instead of dissipating the energy as heat this type of system returned it as power back to the source (normally a substation) via the overhead catenary.

This allowed the newly generated electricity to then be used by other locomotives.

Such efficiencies and advantages with electrified operations, among others, makes one wonder why it has not been more widely adopted by American freight railroads (the last to employ regenerative braking on a daily basis was the Milwaukee Road on its western Pacific Extension). 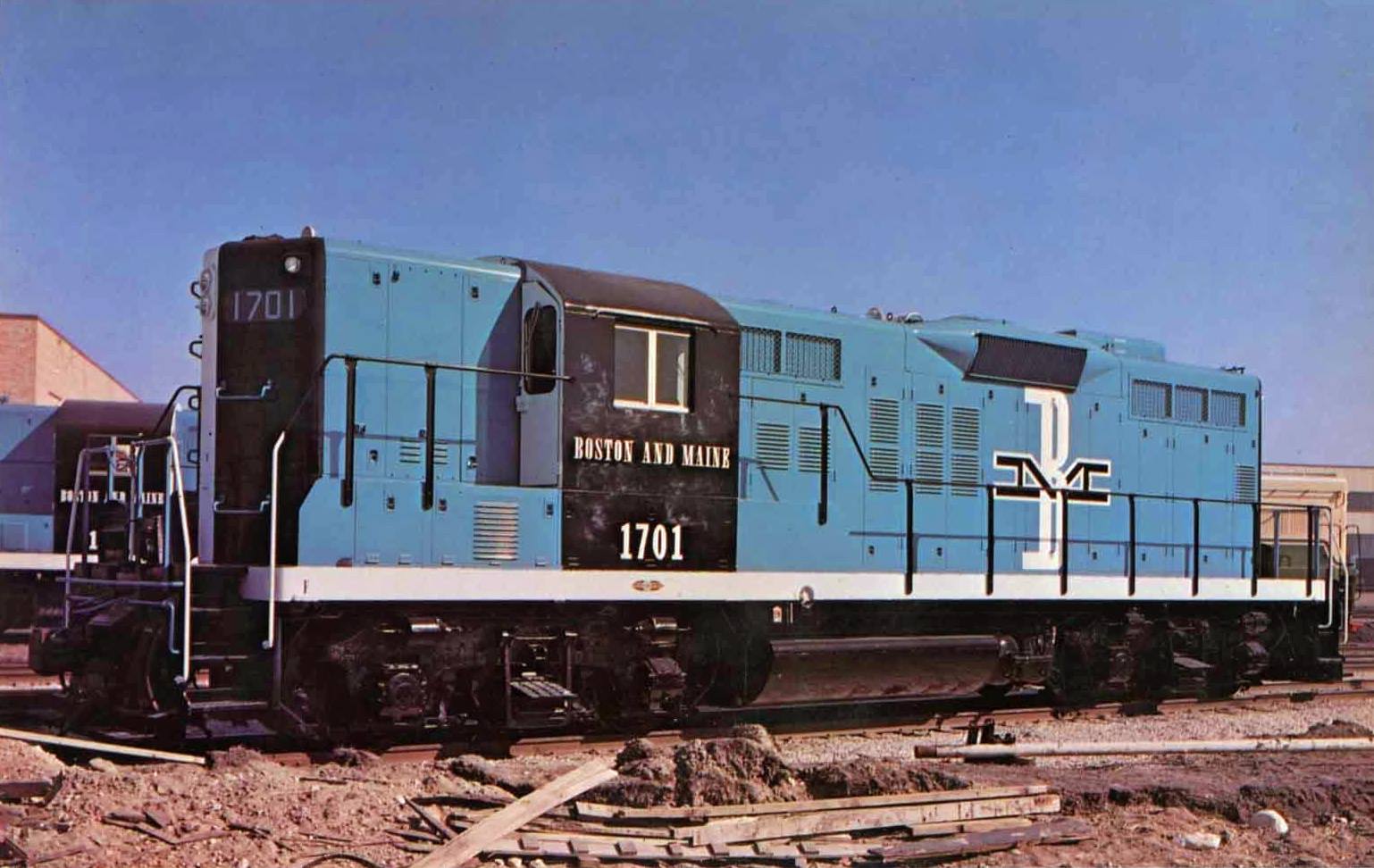 An Electro-Motive builder's photo featuring freshly-outshopped Boston & Maine GP9 #1701 in early 1957. Early first-generation models like the GP7 and GP9 could be equipped with or without dynamics.

For Electro-Motive, the spotting features of dynamic brakes on its early first, and second-generation road-switchers were located behind the cab.  Near the top of the carbody at roughly the center, and just below the roof, is an outward bulge where the resistors are located.

After more than 30 years the location of this classic feature changed with the release of the SD50 in 1981.  Now, EMD models such as the newer SD70ACe, sport dynamics further forward and very near the cab; the bulge is no longer present although a stepped roofline and a boxed grill here gives away its location.

For General Electric, dynamic braking on its models has almost always been located towards the rear of the long-hood.  These can be located on today's newest units like the ES44AC, ES40DC, and ES44DC under the flared radiator housing via angled grilles. 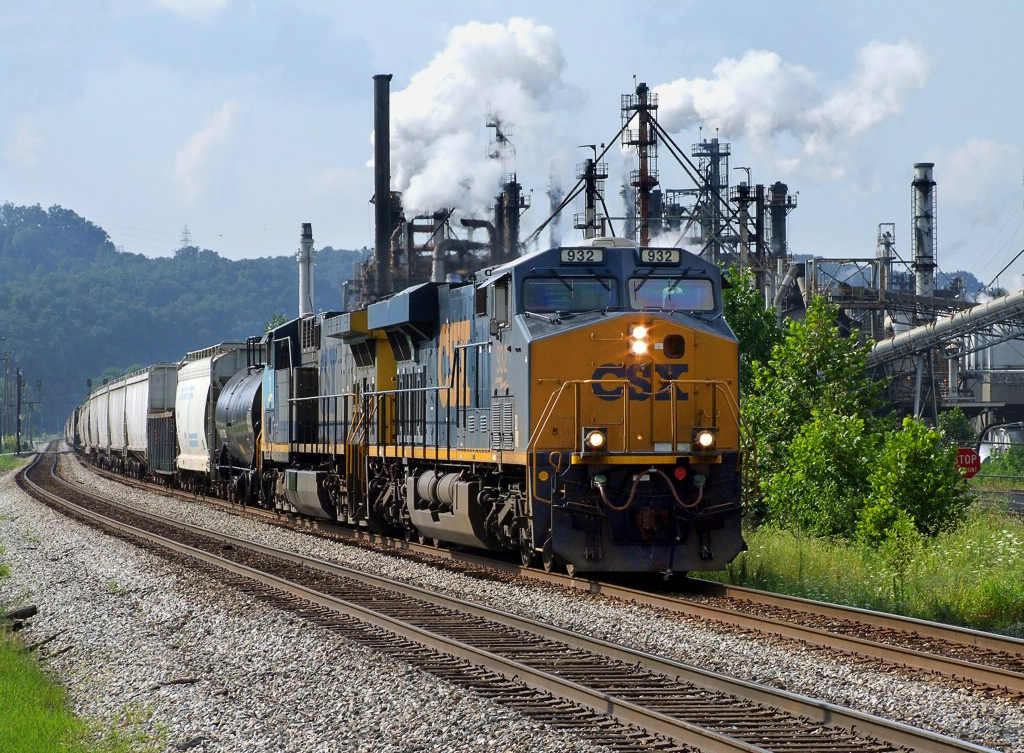 CSX ES44AC #932 and AC4400CW #11 lead an eastbound freight up the Big Sandy Subdivision in Kentucky on July 31, 2009. You can see angled dynamic brake grilles to the rear of both units. Rob Kitchen photo.

Depending on your interest level of locomotives, and diesels in particular, a few books on the subject which may be of interest include Mike Schafer’s Vintage Diesel Locomotives and J. Parker Lamb's Evolution Of The American Diesel Locomotive.

As the title suggests Mr. Lamb's book provides a general history of the diesel through the years.  In the case of Mr. Schafer's book, it is not particularly long (less than 100 pages) but it is nevertheless pretty interesting!