The E6 was the last in the series the builder produced before becoming an official division of General Motors. Interestingly, it began production a year before the E5 and went on to being the most successful E-series design the Electro-Motive Corporation ever built.

Internally and externally the E6 varied little from the E5 with dual headlights and the classic slant nose. More than a dozen Class I railroads purchased the E6 with more than 100 A and B units built (in total).

With the arrival of the Electro-Motive Division's E7 in 1945, General Motors oversaw a subtle but noticeable change to the model giving it more of a "bulldog" nose that had already been applied to the FT and other early F models.

Today, two E6s remain preserved; Louisville & Nashville #770 at the Kentucky Railway Museum and Chicago Rock Island & Pacific (Rock Island) #630 at the Midland Railway Historical Society. Both units remain in their original colors and number, although neither are currently operational. 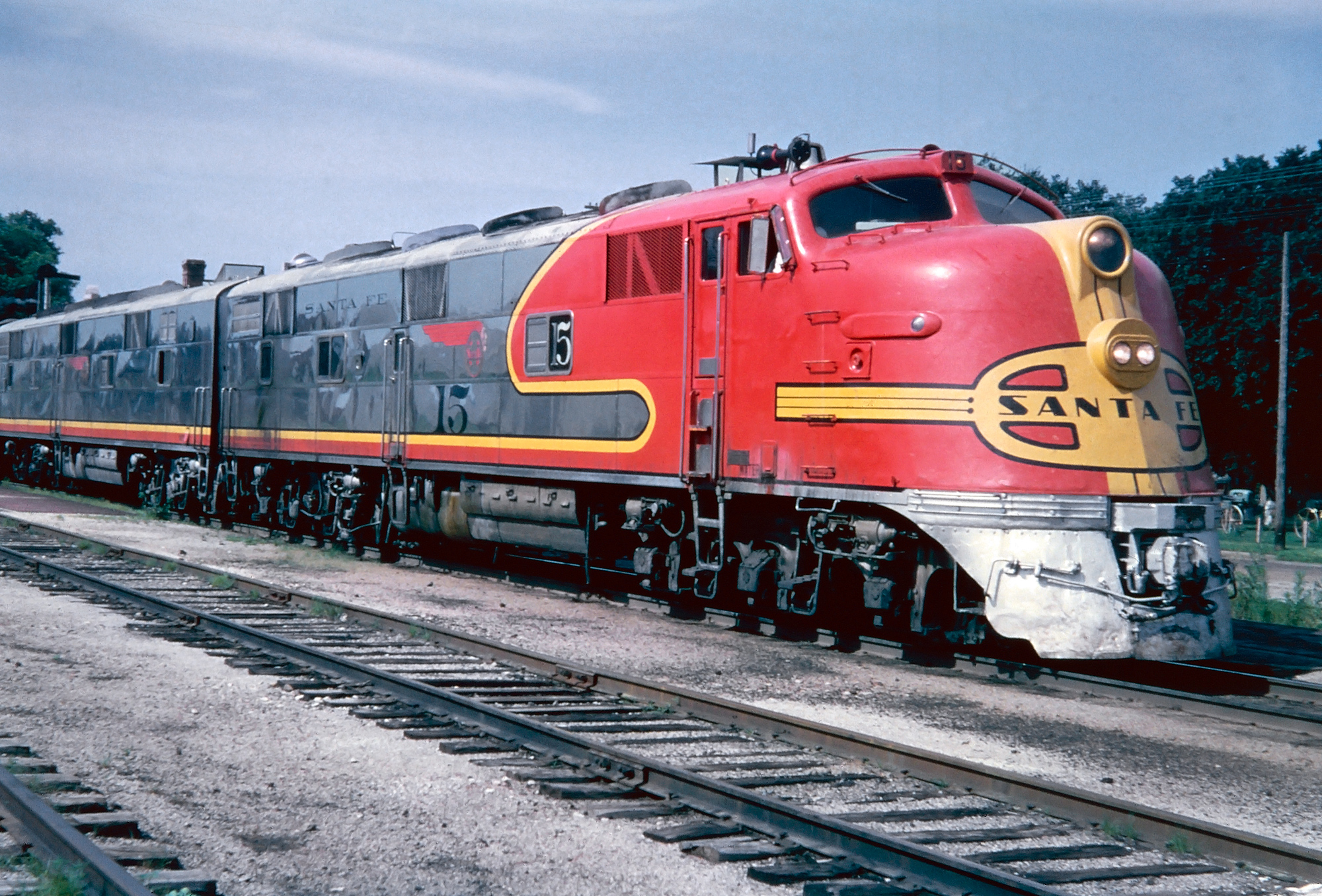 Santa Fe E6A #15-L leads what is most likely train #12, the northbound "Chicagoan," circa 1966. American-Rails.com collection.

The began production in late 1939 and was the only mass produced model Electro-Motive built before its inclusion into GM. It was virtually identical to the E3, E4, and E5 in overall appearance and internal components.

The model featured two GM-built model 567 prime movers which combined could produce 2,000 horsepower. Its A1A-A1A truck setup (whereby the inside axle was unpowered) was the same as every previous model featuring four model D7 traction motors (also built by GM).

As such it could produce 56,500 pounds of starting tractive effort and 31,000 pounds continuous (just as with all earlier models up to that time).

It also offered dynamic braking and MU capability (something that was not actually that uncommon for the time period, the American Locomotive Company's PA model also offered both).

By the time the E6 was developed, word was getting around about the reliability of EMC's early cab diesel locomotives (for both freight and passenger service) and as such, railroads began purchasing its products.

However, what truly gave the company recognition for its passenger models was actually a freight design, its FT of 1939. It toured the country showing railroads what diesels were capable of and was highly successful at doing so.

In the case of the E6 fourteen different Class Is picked up the locomotives, for use on their most prestigious passenger trains with the Atlantic Coast Line purchasing the most. 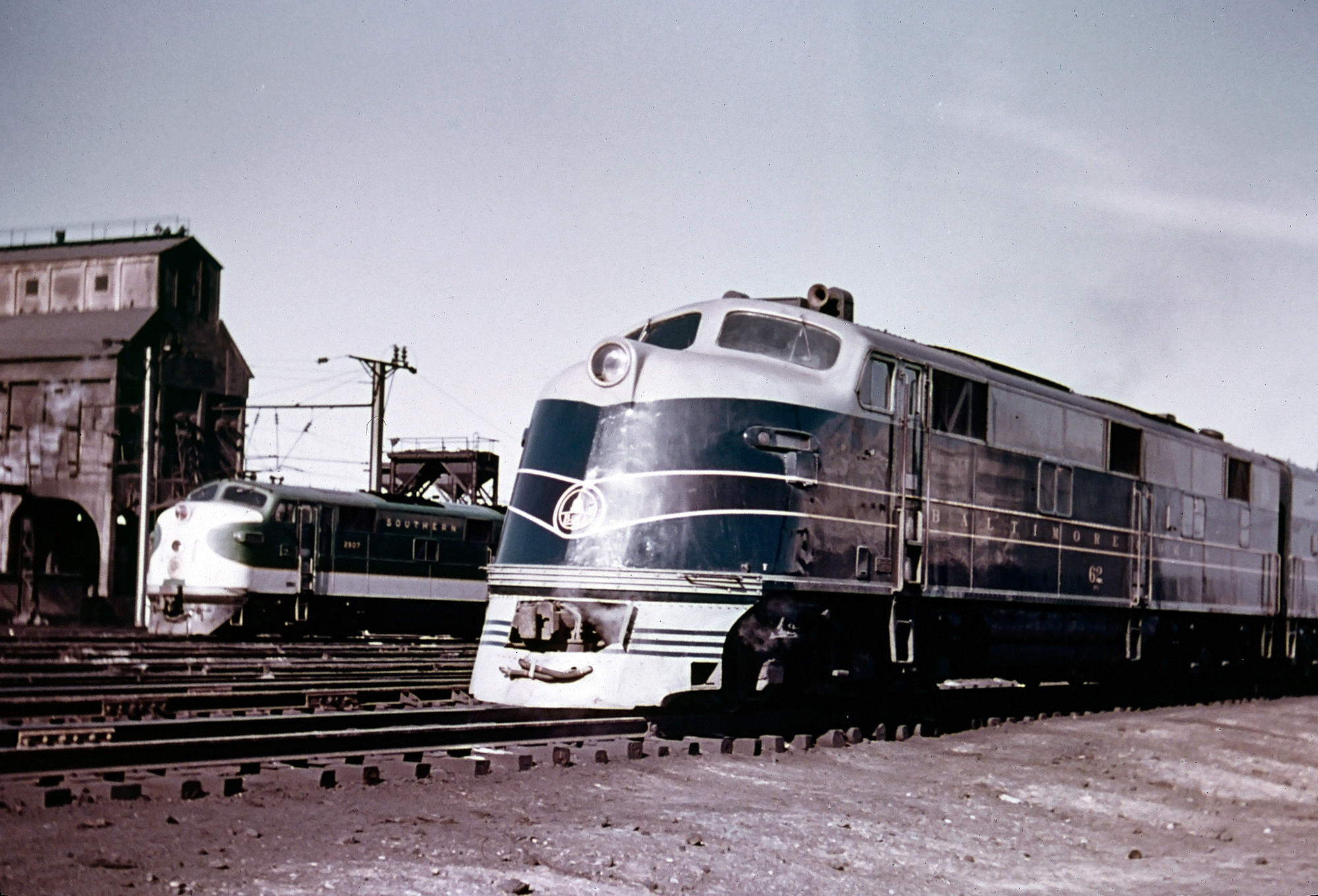 Baltimore & Ohio E6A #62 basks in the sun at the Ivy City engine terminal in Washington, D.C. during 1950. Southern Railway E7A #2907 can be seen in the background. William Rinn photo. American-Rails.com collection.

EMD's one demonstrator, #1940, was later sold to the Seaboard. It should be noted that around this time the now well known railroad liveries began to appear.

This was also thanks to the Electro-Motive Division and its styling department. In the late 1930s it was headed by Leland Knickerbocker, who with the help of Sterling McDonald created the now famous Warbonnet livery.

Knickerbocker passed away in 1940 but was replaced by John Markestein who continued the work. Without these individuals and the designs they created we would not have the now classic liveries from dozens of different railroads like the B&O, Missouri Pacific, New York Central, Southern Pacific, Northern Pacific, Great Northern, Wabash, Milwaukee Road, and on and on.

Through the 1960s this department continued to create paint schemes, most of which came about to match the grace of the streamlined equipment being developed. Many railroads simply went on to adopt these paint schemes as their own and the rest, as they say, is history. 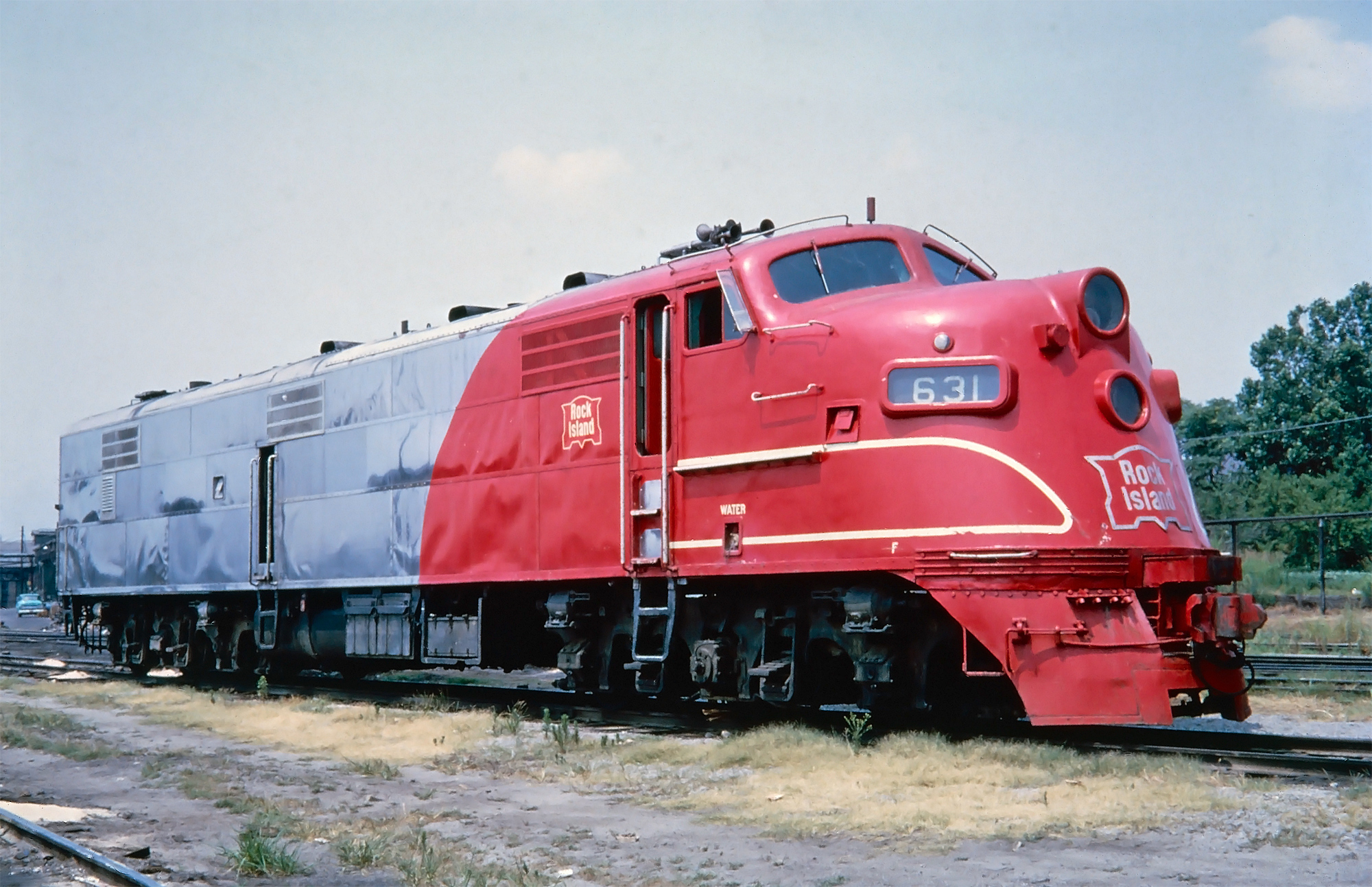 Rock Island E6A #631 is seen here between assignments around 1965. This locomotive spent many years in service. By this time it was generally used in either Chicago commuter service or occasionally led the "Peoria Rocket." American-Rails.com collection.

In all, when production ended on the EMC E6 in the late summer of 1942 some 91 E6As and 26 E6Bs had been built, making it by far the most successful single passenger locomotive design the builder ever produced.

With the war ongoing EMD was forced to mostly halt domestic production and focus all of its efforts on winning the conflict.

In 1945, however, it resumed its E series line by cataloging the E7, which along with the E8 were the two most popular models the company would produce.