The revolutionary FT was originally developed by the Electro-Motive Corporation, a few years before it became an official division of General Motors.

The model, which was designed for freight service, debuted a few years after EMC released the EA intended for passenger service.

The FT proved a marketing sensation convincing railroads that diesels could be used in standard road service following successful demonstrations by GM during 1939 when an A-B-B-A set toured the country.

The success of the locomotive also proved to EMC that introduce a formal line of diesels and the FT paved the way for steam's demise.

Today, despite being more than 70 years of age a number of FT's survive, including half of the original GM demonstrator,  #103 (pictured below), which can be found on display at the Museum of Transportation in St. Louis.

It was later acquired by the Cincinnati, New Orleans & Texas Pacific (Southern Railway).

Railroads like the Santa Fe and Baltimore & Ohio were particularly enthralled by the FT.  These systems had already tested Electro-Motive's early passenger designs, the EA and E1.

They quickly placed orders for the freight variant, recognizing its cost-savings benefits; the Santa Fe wound up with more than 300 and also purchased large batches of the F3 and F7. 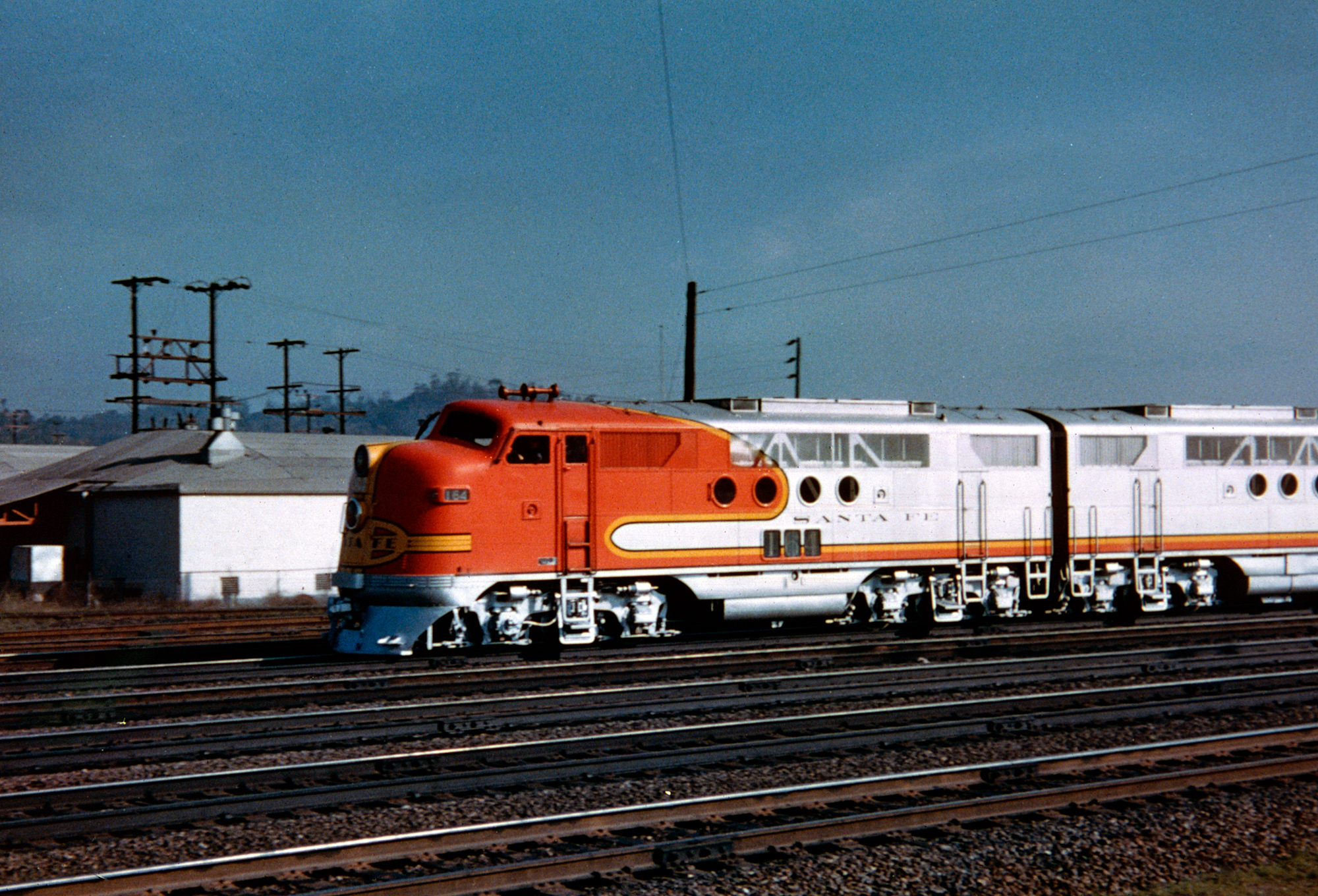 The idea behind what would become the FT began in the 1930s with then EMC's chief engineer Richard "Dick" Dilworth who was attempting to design a rugged, reliable, and powerful main line locomotive that could replace steam, the tried and proven motive power that had been in service since the birth of the industry.

Dilworth was a self-taught mechanical and electrical engineer who knew diesel engines well dating back to his days at General Electric when the company was designing its own early diesels.

Using the General Motors' then relatively new 12-cylinder model 567A prime mover capable of producing 1,350 horsepower Dilworth experimented by using two of the engines with each housed in its own carbody.  Next, he then gave each locomotive two, four-axle trucks powered with GM's model D7 traction motors. 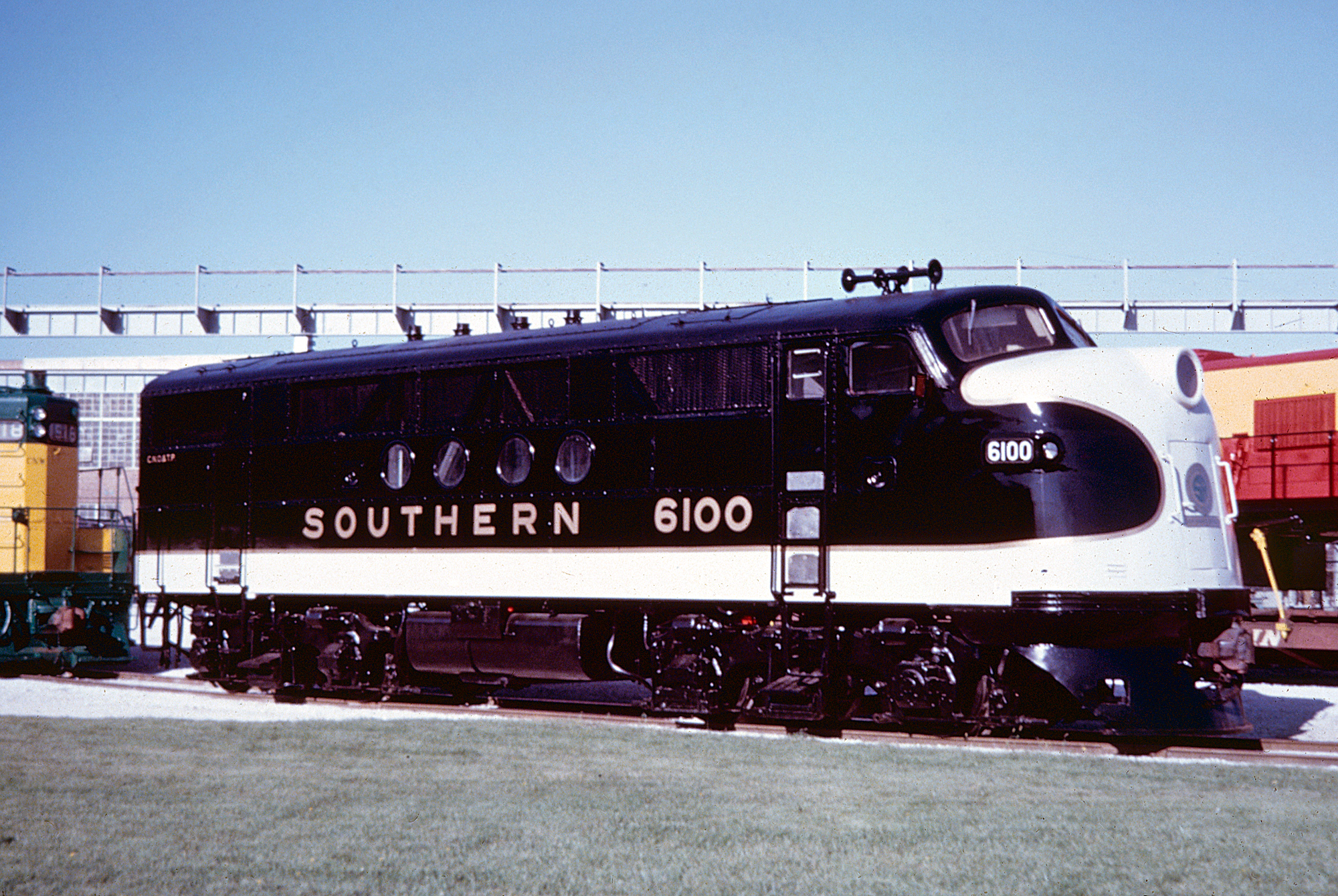 The two units were semi-permanently coupled using a drawbar instead of a standard knuckle coupler, which officially gave the set a rating of 2,700 horsepower.

This early setup proved incredibly successful and Dilworth slowly refined the design by adding an additional set providing for an A-B-B-A lashup that could offer an eye-popping 5,400 horsepower.

Such power rivaled nearly any steam locomotive of the time albeit via four units instead of one. It was this A-B-B-A set that General Motors went to market in 1939 as the FT. The new cab locomotive was given a beautiful streamlined carbody by the company's new styling department, then headed by now legendary Leland Knickerbocker.

The FT was the first to sport the now classic "bull dog" nose that was applied to all future models, including the passenger designs (starting with the E7). 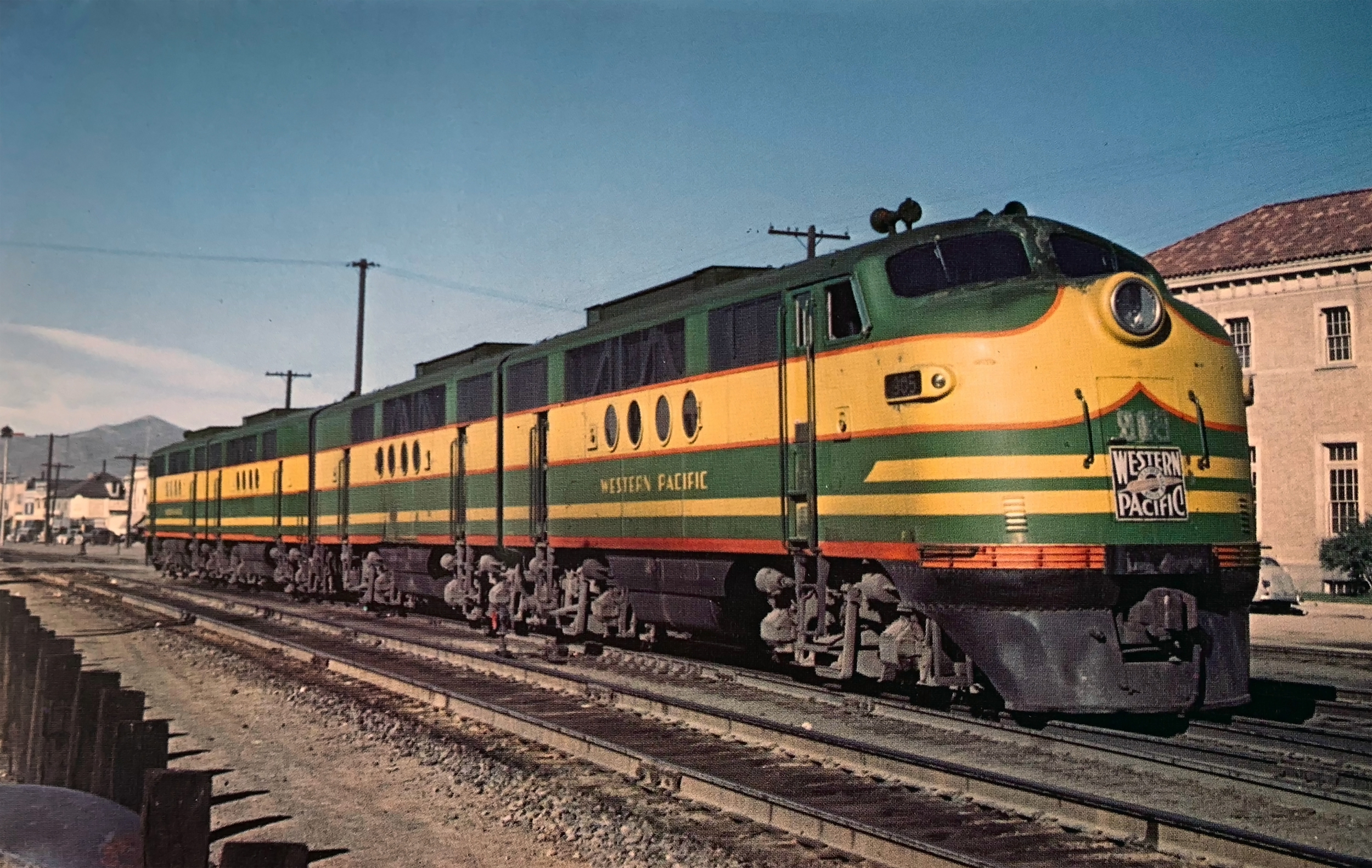 Officially, the FT stood for Freight, Twenty-seven hundred horsepower. Part of the model's huge sales numbers came from the extremely successful PR campaign of the original demonstrator, which embarked on a cross-country tour in May of 1939 featuring A units #103 and #103A and B units #103(b) and #103A(b).

During the following eleven months they traveled across 20 states covering some 83,764 miles convincing railroads as they went of diesels' superiority for use in main line freight service. Another reason for the FT's success was its application of dynamic braking, the first locomotive to employ the feature.

Just as electric motors were efficient in using the overhead catenary for regenerative braking by returning voltage back into the system, dynamic brakes worked by using the traction motors to retard the train's progress.

This feature not only prolonged the life of both the wheels and brake shoes but also allowed the locomotive to hold back very heavy trains on steep grade for an increased level of safety (and it is still used in modern day diesel). 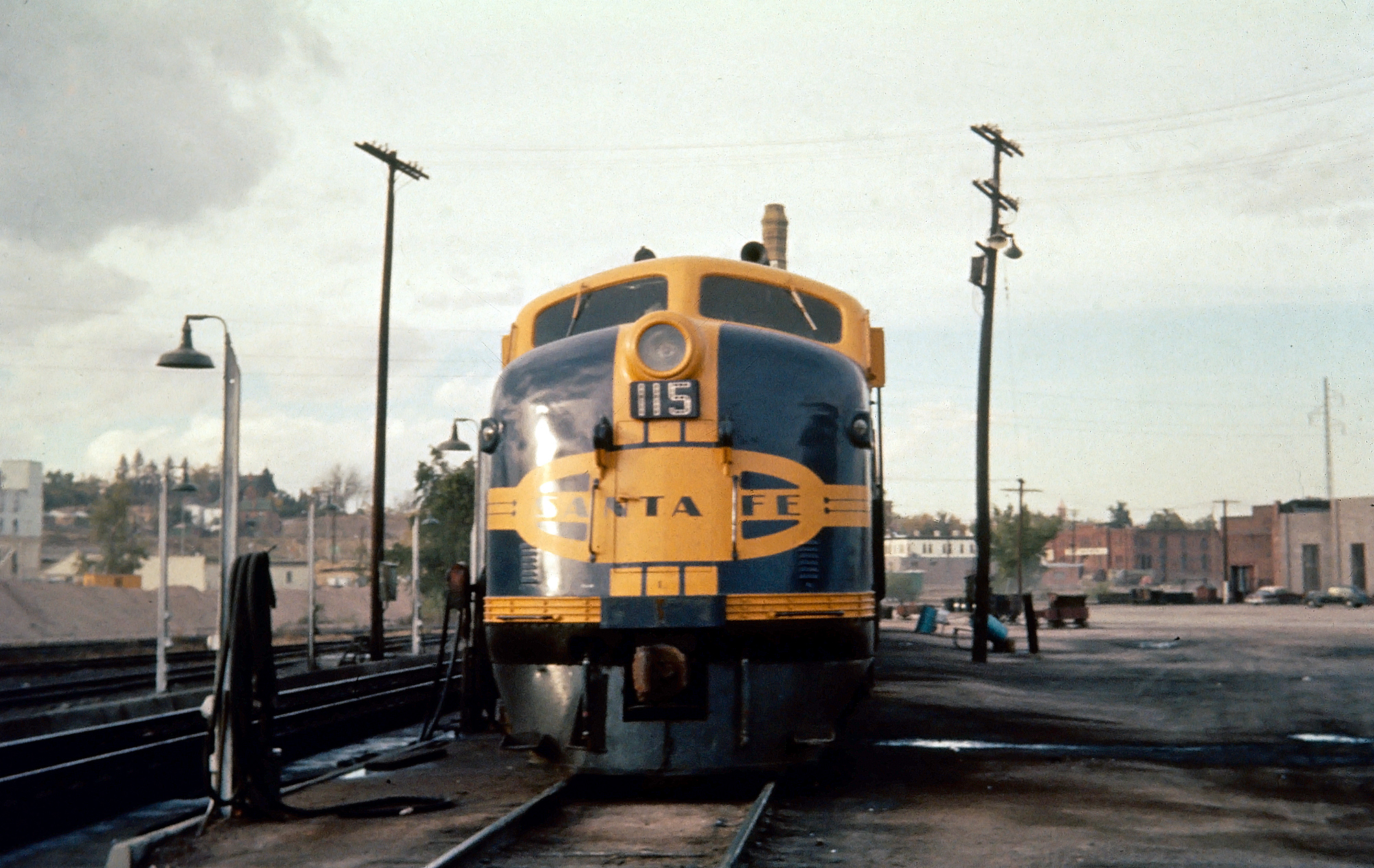 Its "bull dog" nose and sweeping, streamlined carbody became the most famous such design ever developed and remains easily recognizable by both railfans and the general public.   While the FT looked good visually what really impressed railroads was the model's cost savings.

While companies realized they would have to sacrifice horsepower with the new diesel (at the time, the largest single steam locomotive was nearly three times as powerful as the FT) this was a trade-off they were willing to make and orders quickly took off.

As it had done with the E1 passenger model the Sana Fe was the first to jump on board ordering a whopping 320 A and B units by itself (interestingly, it purchased more FTs than Alco’s entire line of PAs).  It wasn't long until other railroads followed. 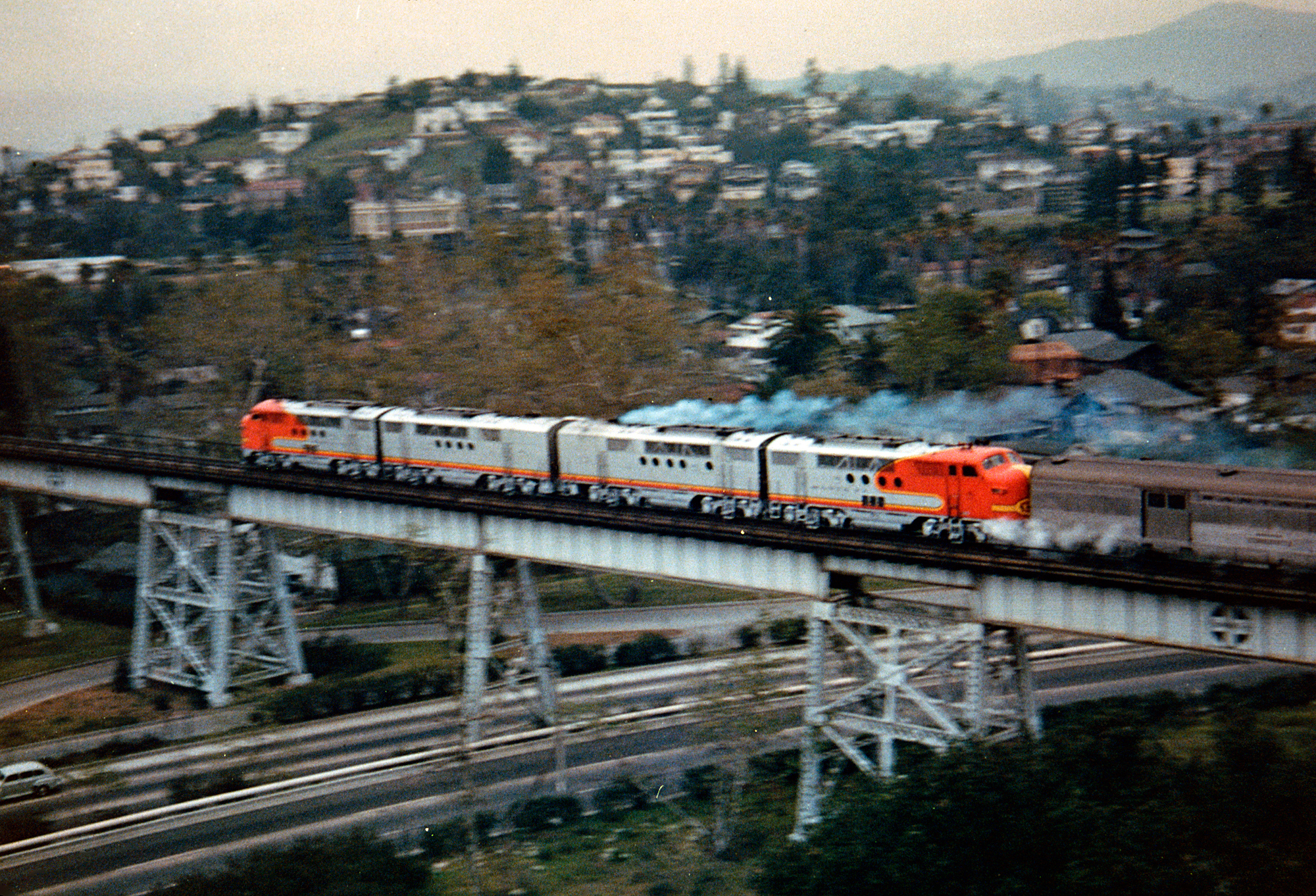 In the end nearly two dozen railroads, all Class Is from the Chicago & North Western and Milwaukee Road to the Reading and New York Central purchased the FT.

The model became so successful that by time production had ended in the late fall of 1945 EMD had sold over 1,000 units!  The locomotive led to the later classic F3 and F7, both of which sold even better.

Today, five FT units are known to be preserved: demonstrators A unit #103 at the National Museum of Transportation, St. Louis and B unit #103(b) at the Virginia Museum of Transportation; Northern Pacific A unit #5401D at the Puebla Museum in Mexico; Southern B unit #4100C also in St. Louis; and Southern B unit #4103B at the Southeastern Railway Museum.