The General Electric-built E60 was the first new electric locomotive design built in the post-Amtrak era when the private freight railroads no longer operated passenger trains.

This much more powerful motor was designed exclusively for passenger service and meant to replace an aging fleet of electrics that Amtrak had inherited from freight railroads, notably the Penn Central who was operating a fleet of motors that dated back decades and were completely worn out.

After almost 30 years of operation the E60's which remained in use on Amtrak were retired in 2003, worn out by decades of constant use.

Today, a few of these electrics have been preserved including Amtrak #603 and NJ Transit #958; the former can be found at the Railroad Museum of Pennsylvania while the latter is owned by the United Railroad Historical Society of New Jersey.

Amtrak was not the only company to operate these electrics; the Navajo Mine Railroad/Black Mesa & Lake Powell Railroad; New Jersey Transit; Ferrocarriles Nacionales de México (NdeM); and Deseret-Western Railway all operated variants of the E60.  A total of 73 units were produced between 1972–1983 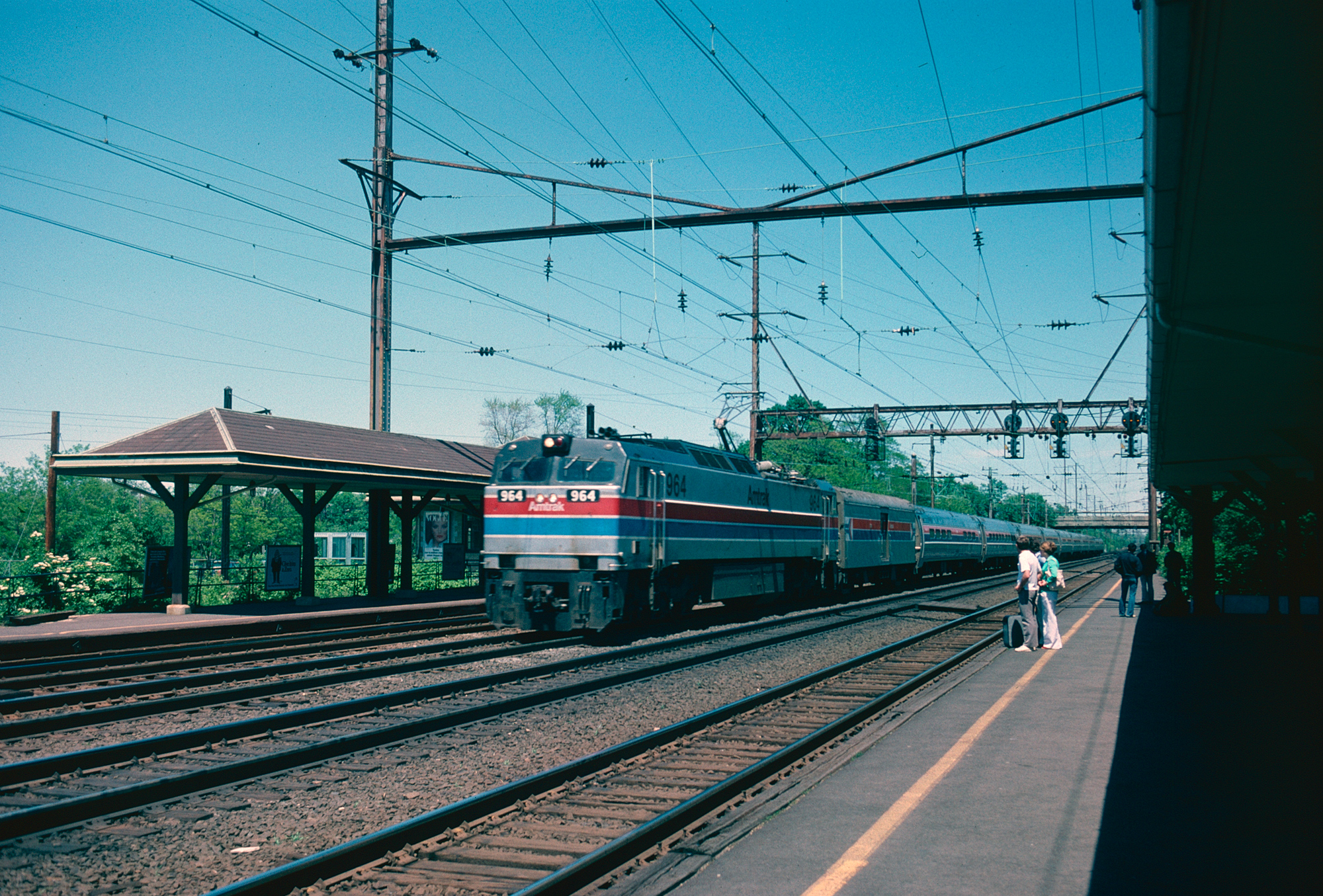 Amtrak E60CH #964 is southbound along the Northeast Corridor in May, 1977. Author's collection.

The GE E60 model, a double-ended design, was built for Amtrak between 1974 and 1976 to replace its aging fleet of electrics handed to it from Penn Central, mostly in the way of the Pennsylvania Railroad’s venerable GG1s.

The E60s were powerful locomotives capable of producing 6,000 horsepower and 75,000 pounds of starting tractive effort (which is where its name is derived; Electric, 6000 hp).

Two versions of the E60 would ultimately be built, one classified as an E60CP, which featured a steam generator for older passenger equipment Amtrak operated and the E60CH, which was equipped with the more modern head-end electric power for heat and electricity. 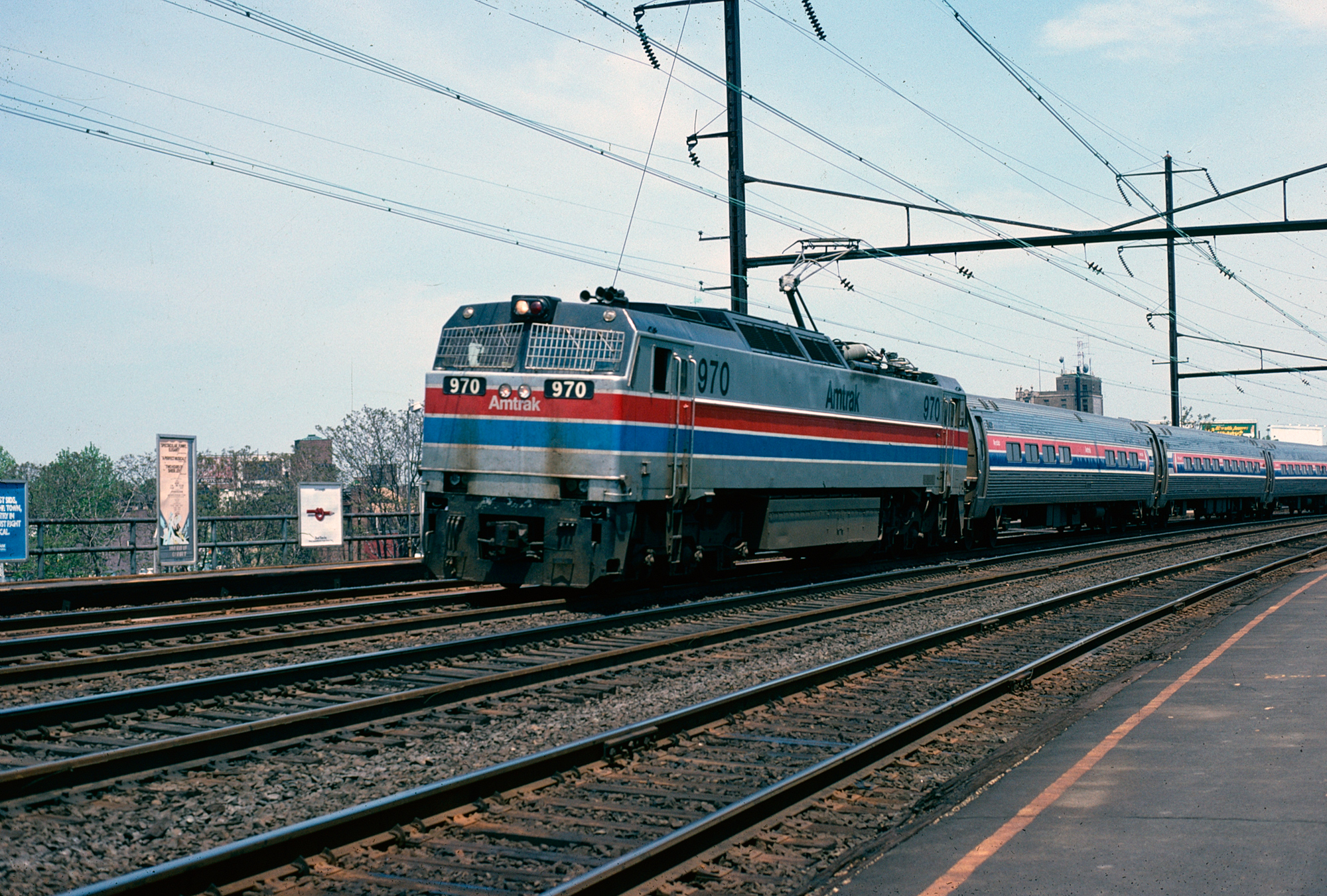 In all, Amtrak owned a fleet of 26 E60 electrics although the motors had a relatively short service life.

Interestingly, as mentioned above the fleet had a mixed setup of nineteen units featuring new head-end power while seven used older steam generators to compensate for the large collection of antiquated passenger equipment Amtrak inherited.

The passenger carrier was never truly pleased with the E60s and sought another more efficient and effective motor to serve its North East Corridor territory.

The railroad would eventually settle on the AEM-7 model in the early 1980s, which was a design quite similar to a Swedish Rc4 motor.

With the arrival of these new locomotives in 1984, after just a little over ten years in service Amtrak parked most of its E60 fleet.

Eventually twelve of these locomotives were sold to two other railroads, New Jersey Transit and the Navajo Mining Railroad (now known as the Deseret Western Railway).

Those fourteen that remained were reclassified as E60MAs (the MA stood for Motor Alternating) and operated for almost another 20 years before being retired in 2003. 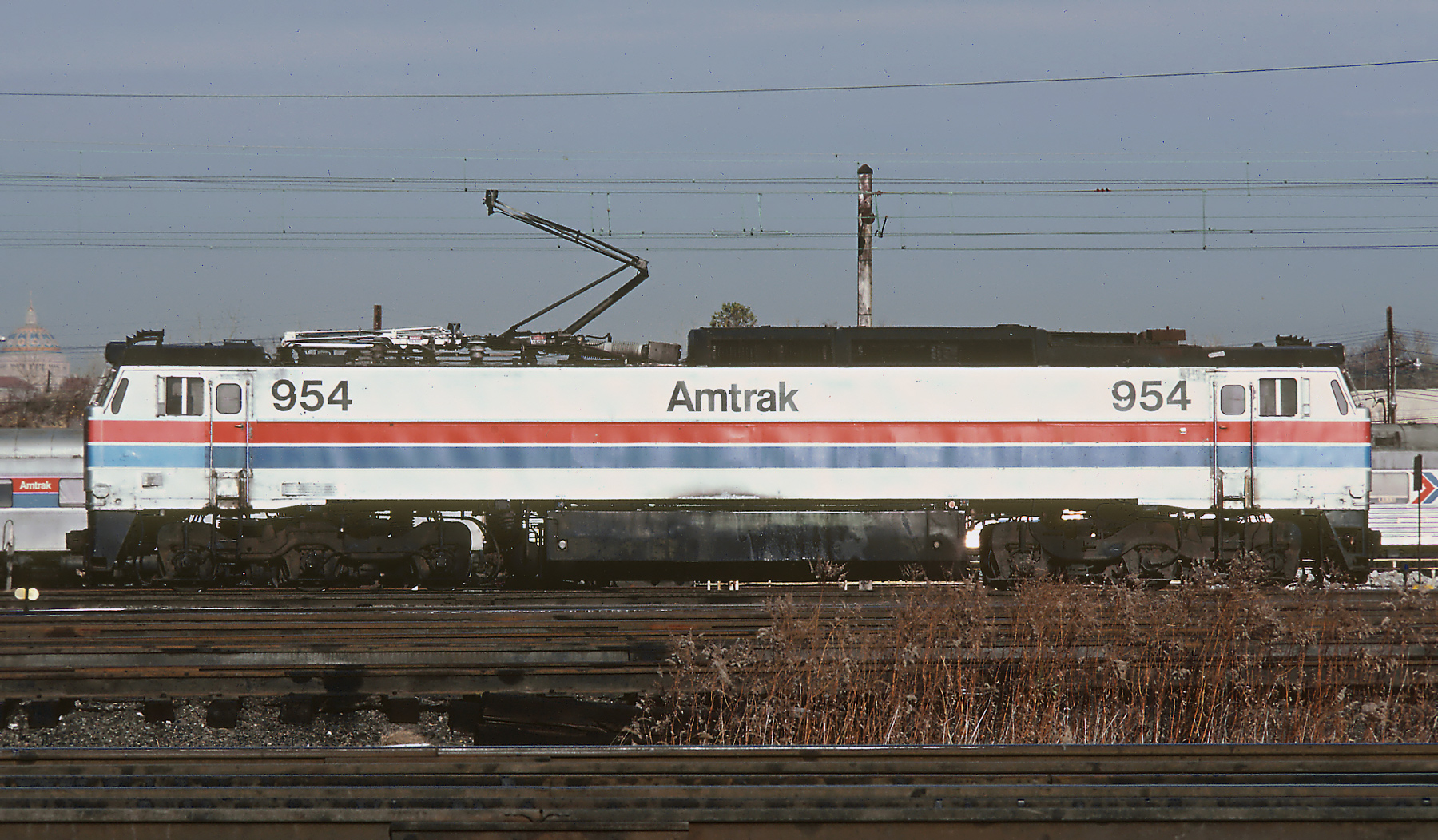 Perhaps indicative of the times by the 1970s and the main line railroads' increasing disinterest in using electric locomotives in regular service the GE E60s were problematic with a number of flaws, mostly stemming from their heavy weight.

The locomotive was designed to be operated at speeds of up to 120 mph. However, its heavy weight caused the model to lean when operating at speeds in excess of 100 mph, resulting in the locomotive becoming unstable.

As a result the Federal Railroad Administration limited the E60's top speed to just 90 mph, somewhat crippling its ability as a fast and efficient passenger locomotive. 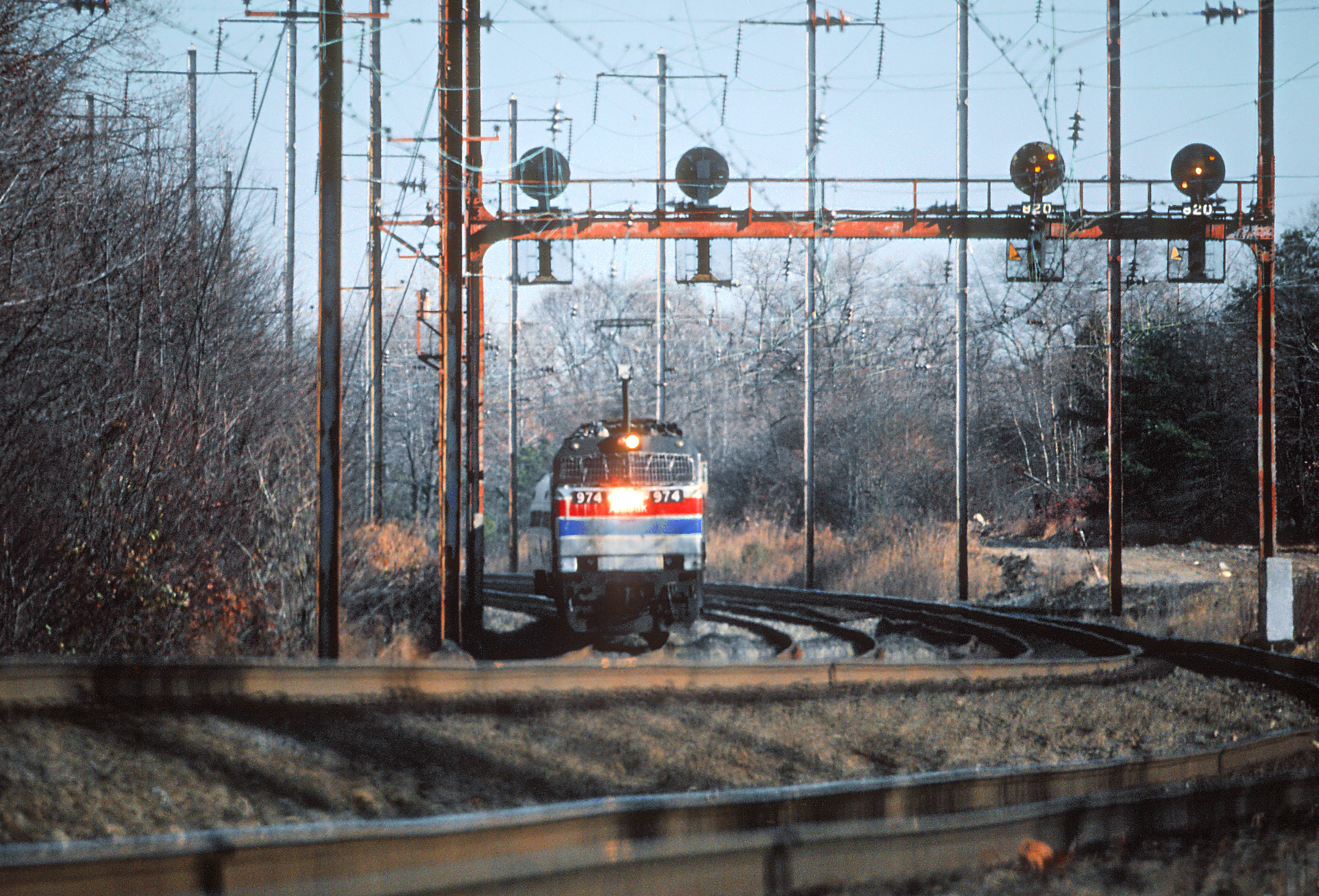 This probably also caused sales for the model to be somewhat poor (although lack of demand, in general, by the 1970s also was likely a factor). In total, General Electric sold just 73 E60s to domestic and foreign buyers.

Additionally, after just 10 years in Amtrak's fleet the carrier had all of its remaining units (with the arrival of the AEM-7 model in 1984 the carrier quickly began replacing the E60s) entirely rebuilt for more efficient operation.

*  Preserved by the United Railroad Historical Society of New Jersey.

* Preserved at the Railroad Museum of Pennsylvania as Amtrak #603. 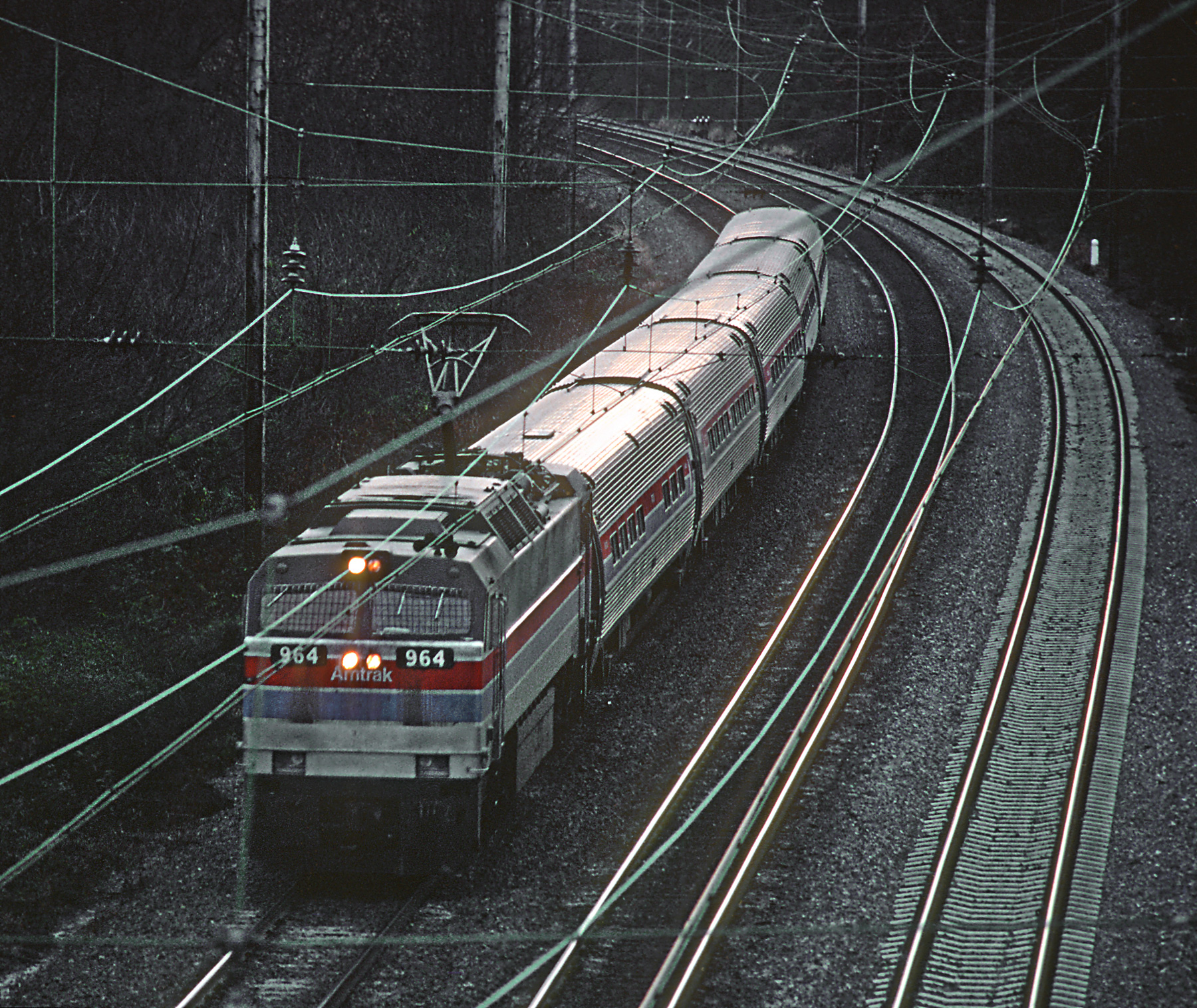 Amtrak E60CH #964 appears to be northbound on the Northeast Corridor near Seabrook, Maryland in December, 1980. Roger Puta photo.

After completion of the rebuild program the remaining eleven E60s (now classified as E60MA) all used electrical head-end power (HEP) and were numbered from 600-610.

Still, however, the model was best suited more for heavy freight service than hauling passenger cars.

As such, Amtrak assigned the eleven to their heaviest/busiest corridors such as the Crescent and Broadway Limited running to and from New York City.