The Missouri Pacific's fleet of trains were the Eagles and served all of the railroad's far reaching markets including St. Louis, Kansas City, Dallas, Fort Worth, Denver, Omaha, San Antonio, New Orleans, and El Paso.

The Colorado Eagle was one of MP's premier services linking St. Louis and Denver in conjunction with the Rio Grande.

While the MoPac’s Eagle fleet is well remembered it was not as successful as some of the West's other fabled trains.; names like the Santa Fe's Super Chief, the WP/Rio Grande/Burlington California Zephyr, and Union Pacific's opulent City fleet were much more popular.

Despite this, the Eagles carried enough status that the name survives today under Amtrak. 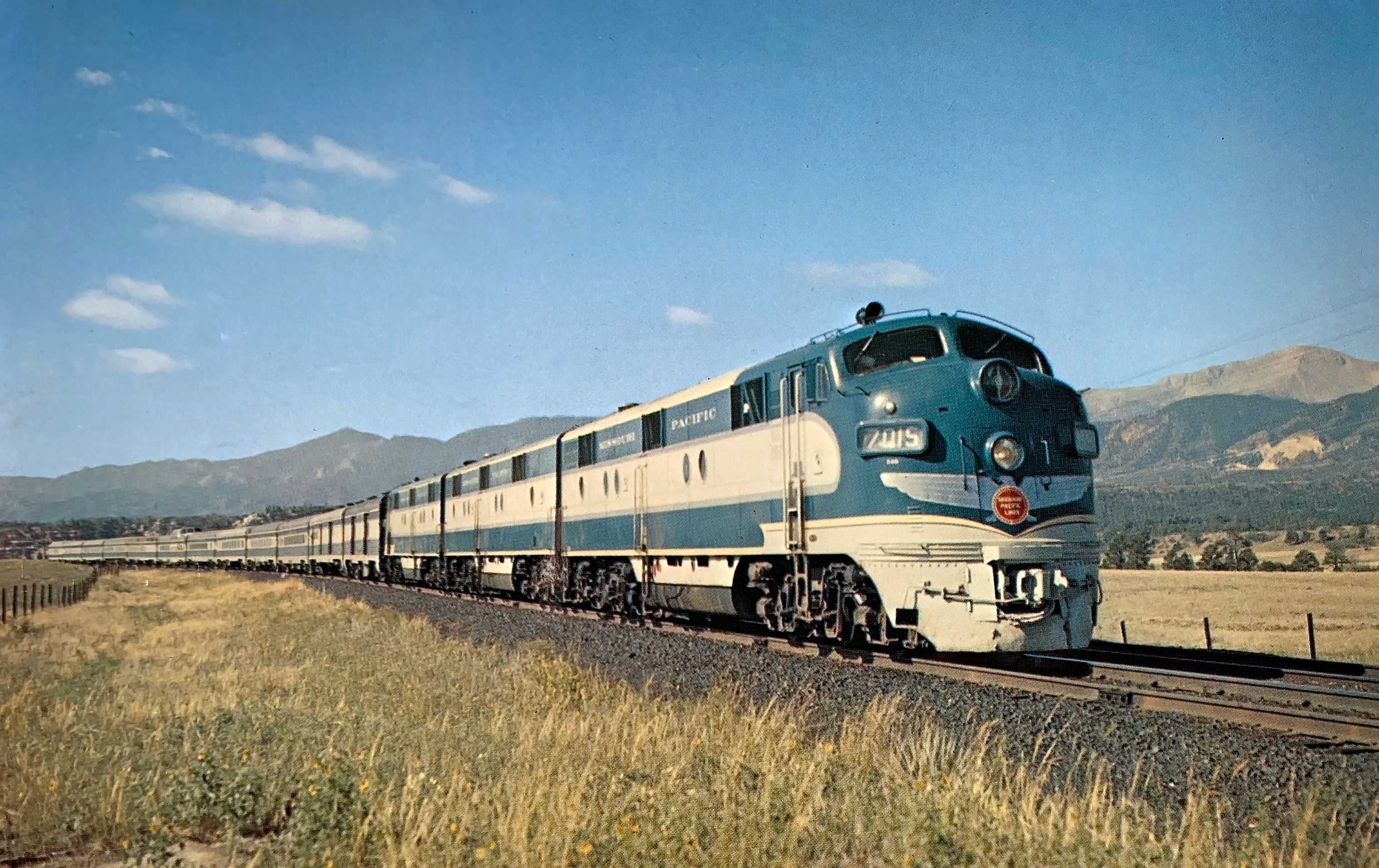 The Missouri Pacific's corporate heritage began as the Pacific Railroad chartered in March, 1849.

Historically, the company is credited with operating the first train west of the Mississippi River when the locomotive "Pacific" chugged over the original 5 miles of track between St. Louis and Cheltenham on December 9, 1852.

The Missouri Pacific Railway was formed in 1872 from the remnants of the Pacific Railroad and eventually fell into Jay Gould's hands.

Despite his shady business practices, Gould did transform the MP into a major player throughout the Midwest and Gulf Coast. By also owning the Texas & Pacific the MoPac stretched across eleven Midwestern and Southern states.

In spite of this, the railroad dealt with over a half-dozen bankruptcies from 1849 until 1956. 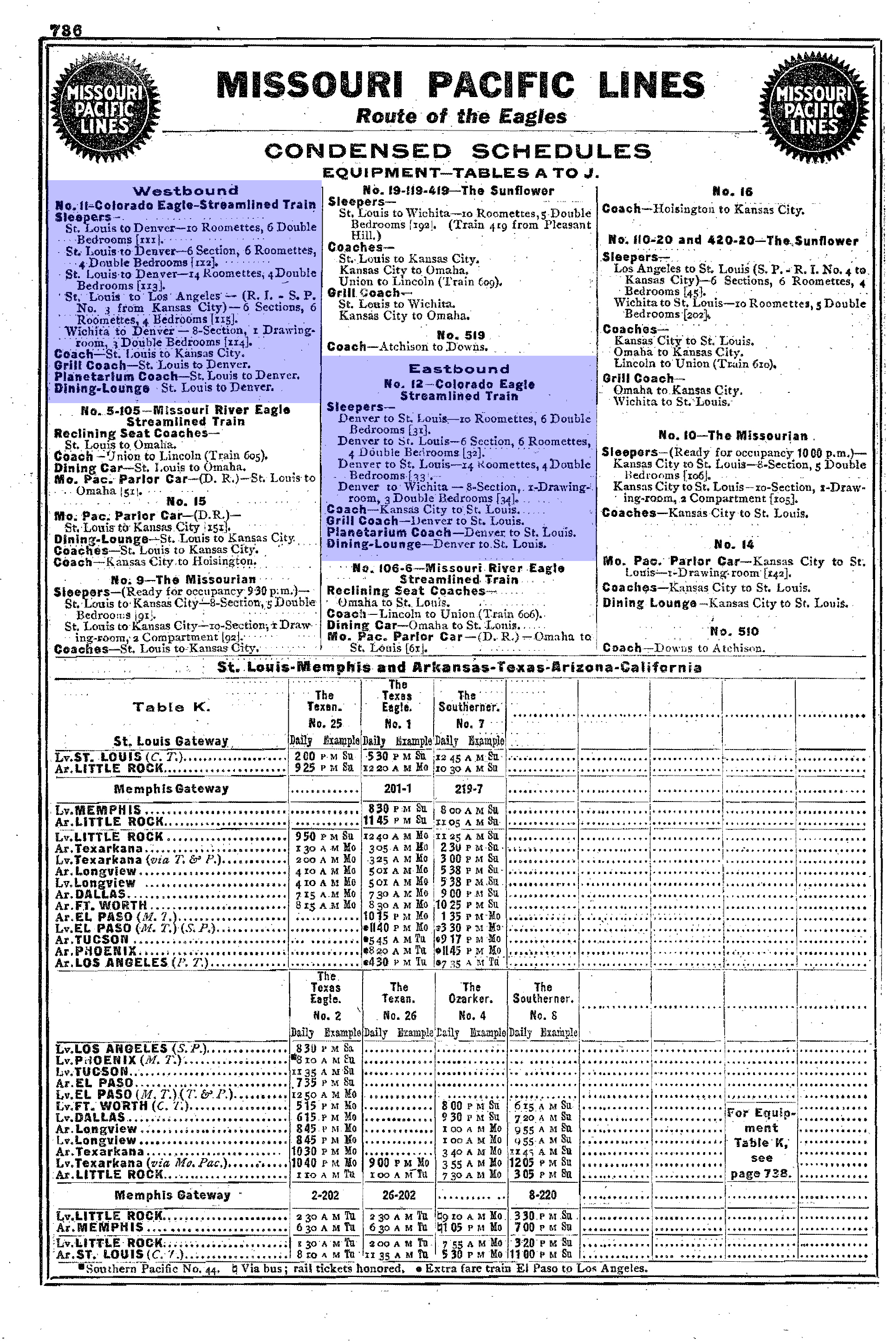 Being only regional in nature, the original Eagle was a six-car consist (with an EMD E3 diesel locomotive on the point for power), built by American Car & Foundry.  The train's consist included a diner, lounges, and parlor-observation.

What the MoPac began as just the Eagle in March 1940 blossomed into an entire fleet of Eagles including the Aztec Eagle, Missouri River Eagle (which was the original Eagle renamed), Valley Eagle, Louisiana Eagle, and Delta Eagle.

The Missouri Pacific’s Colorado Eagle was the very last of the fleet to get its wings when it was inaugurated in June of 1942. The train's route headed westward from St. Louis and upon reaching Pueblo, Colorado, worked in conjunction with the Rio Grande to complete its journey into Denver.

Like the rest of the fleet the Colorado Eagle featured dazzling designs on both its exterior and interior. All of this came from noted industrial designer Raymond Loewy, who gave the Eagle fleet a classic livery.

The scheme was an intricate design of dark blue, light cream, silver, and yellow with a chromed eagle flanking the nose of locomotives.

The interior of the train featured similar colors, particularly the train’s noted dark blue, in a consist featuring diner-lounges, standard sleepers, diners, and a grill/chair coach.

During these early years, Pullman was contracted to staff and serve the train.  The Colorado Eagle also featured domes.  What the MoPac coined Planetarium Domes were  a product of the Budd Company and part of a 1948 order for a new equipment that totaled $14 million. 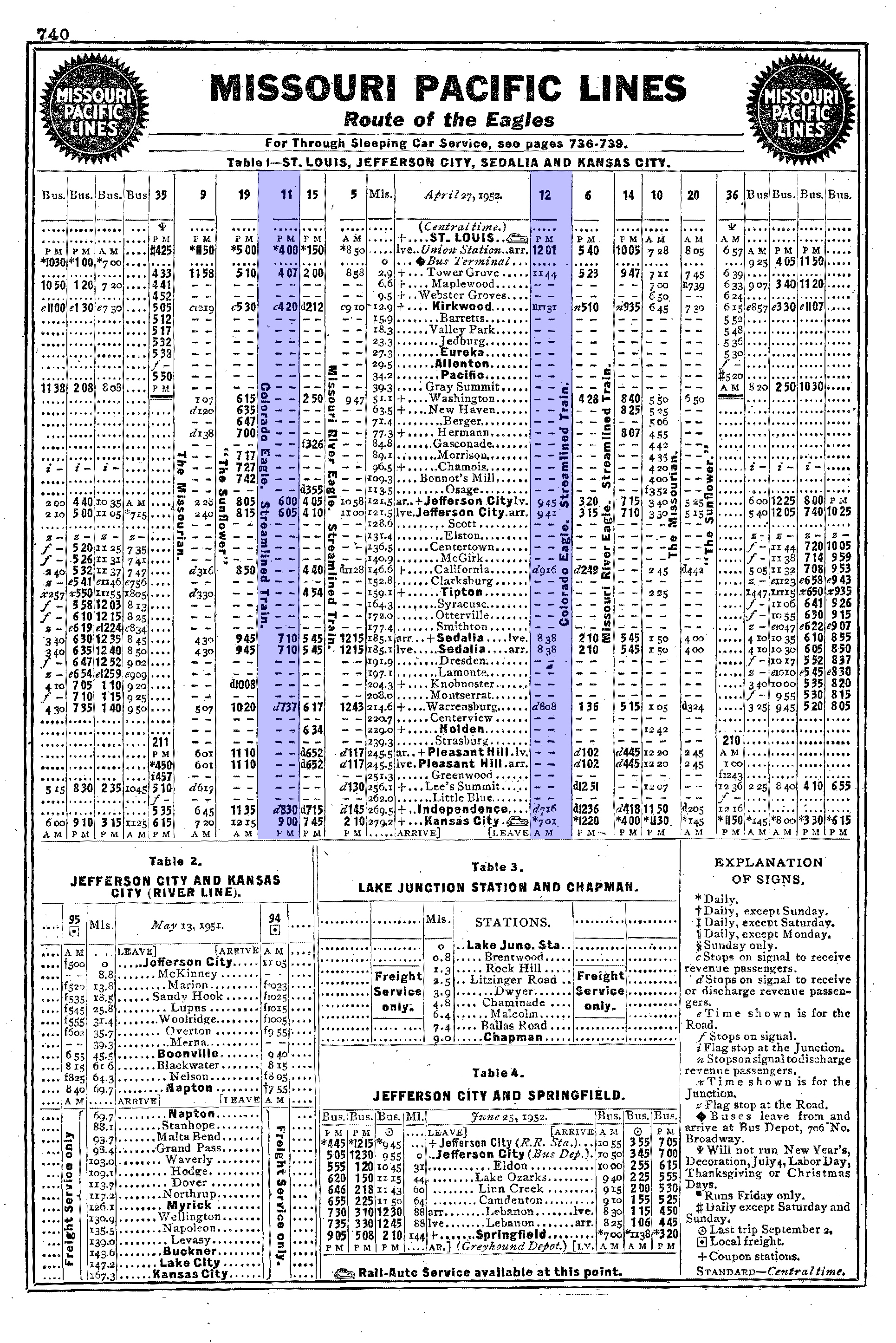 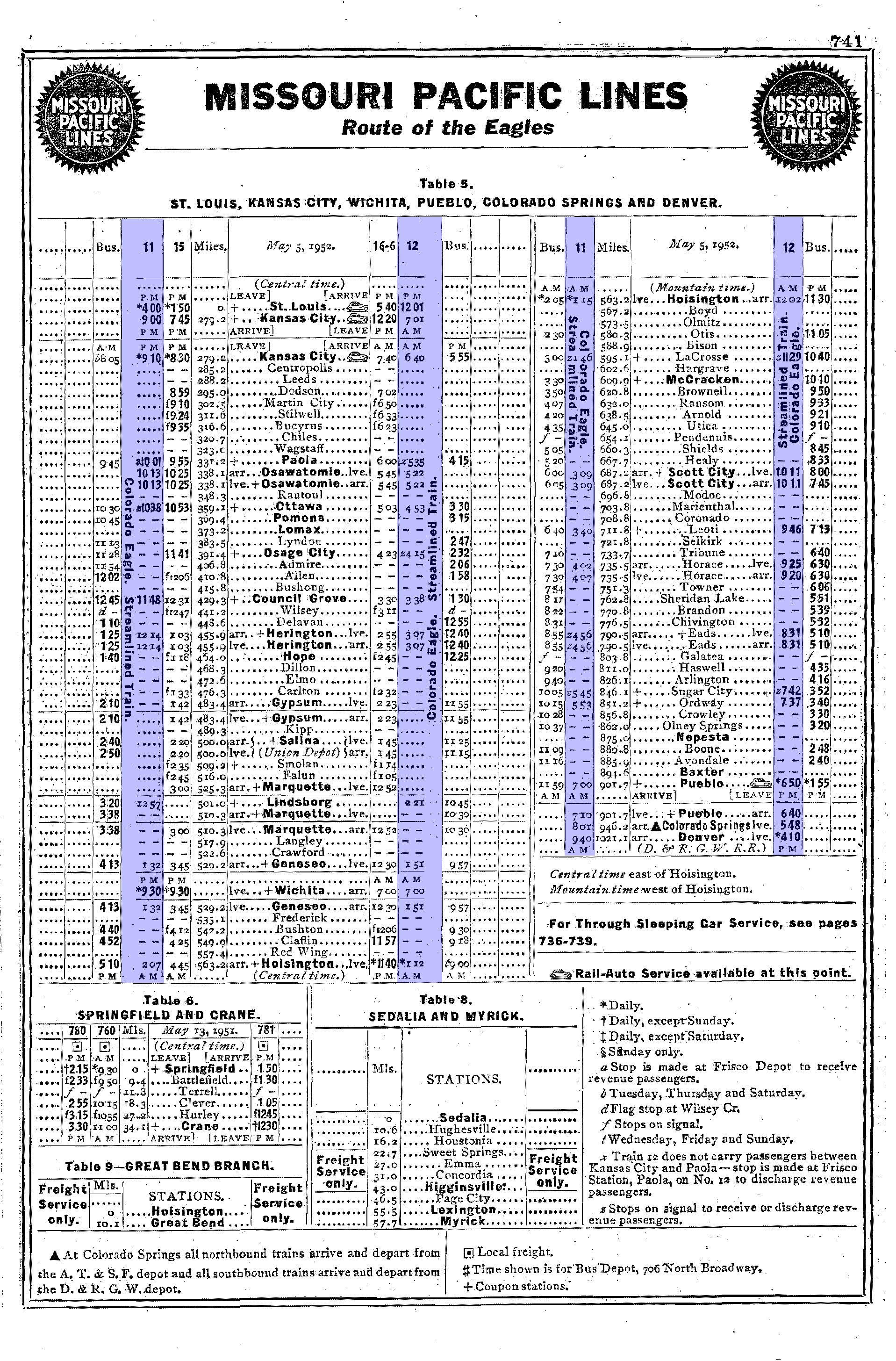 According to the Missouri Pacific's 1944 timetable the westbound train (#11) would depart St. Louis Union Station at 4:15 pm, reaching the connection with the Rio Grande at Pueblo by 6:50 am the following morning (this was the western edge of the MP system).

The MP also provided connecting service between Wichita and Geneseo, Kansas. From Pueblo, the D&RGW would ferry the Colorado Eagle into Denver Union Station in a few short hours, arriving there by 9:50 am.

In total, the trip typically lasted just over 18 hours carrying an average train speed of 55 mph.

In the early 1960s with losses mounting (totaling $14 million in 1962), the MoPac had no choice but to downgrade or discontinue many of its regional services although fragments of them limped on until Amtrak took over intercity passenger train operations in 1971.

The Colorado Eagle was one of the first to see reductions in services. In early 1964 the train lost all-Pullman status and likewise had its dining services yanked. 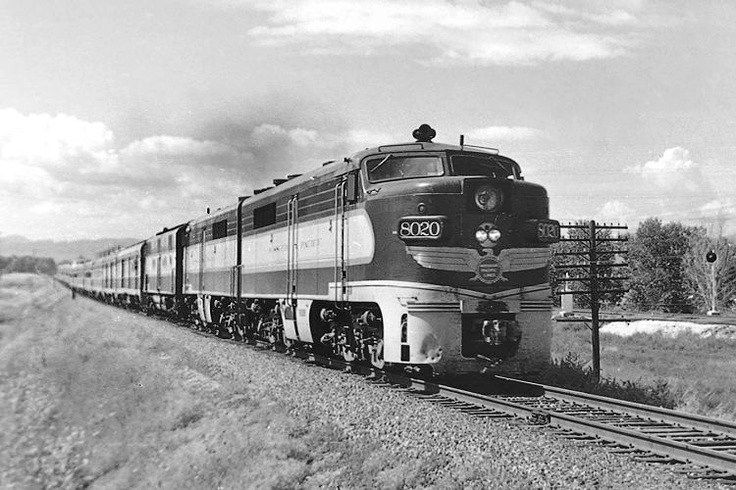 Missouri Pacific PA-2 #8020 leads the "Colorado Eagle" during the 1950s somewhere in Colorado. Unlike most roads, the MoPac continued using PA's in service well into the 1960's.

Just a few years later it had completely lost its name and was cut back to just Kansas City, no more than a regional run, and remained this way until the startup of Amtrak in 1971.

During these final years the train typically employed a consist featuring nothing more than coaches.

The slow decline of the streamliner can certainly be attributed to outside competition in the way of automobiles and airplanes although another major factor in the train’s decline was the hotly contested market it served.