When where trains invented? In this article we will present a two-part piece covering that subject as well as the topic of early passenger trains.

Far before rail travel was ever conceived in the United States, and the rest of the world, there was few other means to move people and goods.

For centuries the long proven method of land-based transportation was via four-legged animals (horse, donkey, mule, camel, etc.) while wind or man-powered watercraft were used on rivers, lakes, and oceans.  It was not until the steam engine's invention did everything chance.

This device, which came about in the early 18th century, would not find its way to America until the early 1800's, some sixty years after the signing of the Declaration of Independence.

This was essentially the way things always were throughout human history and changed little until the 19th century. 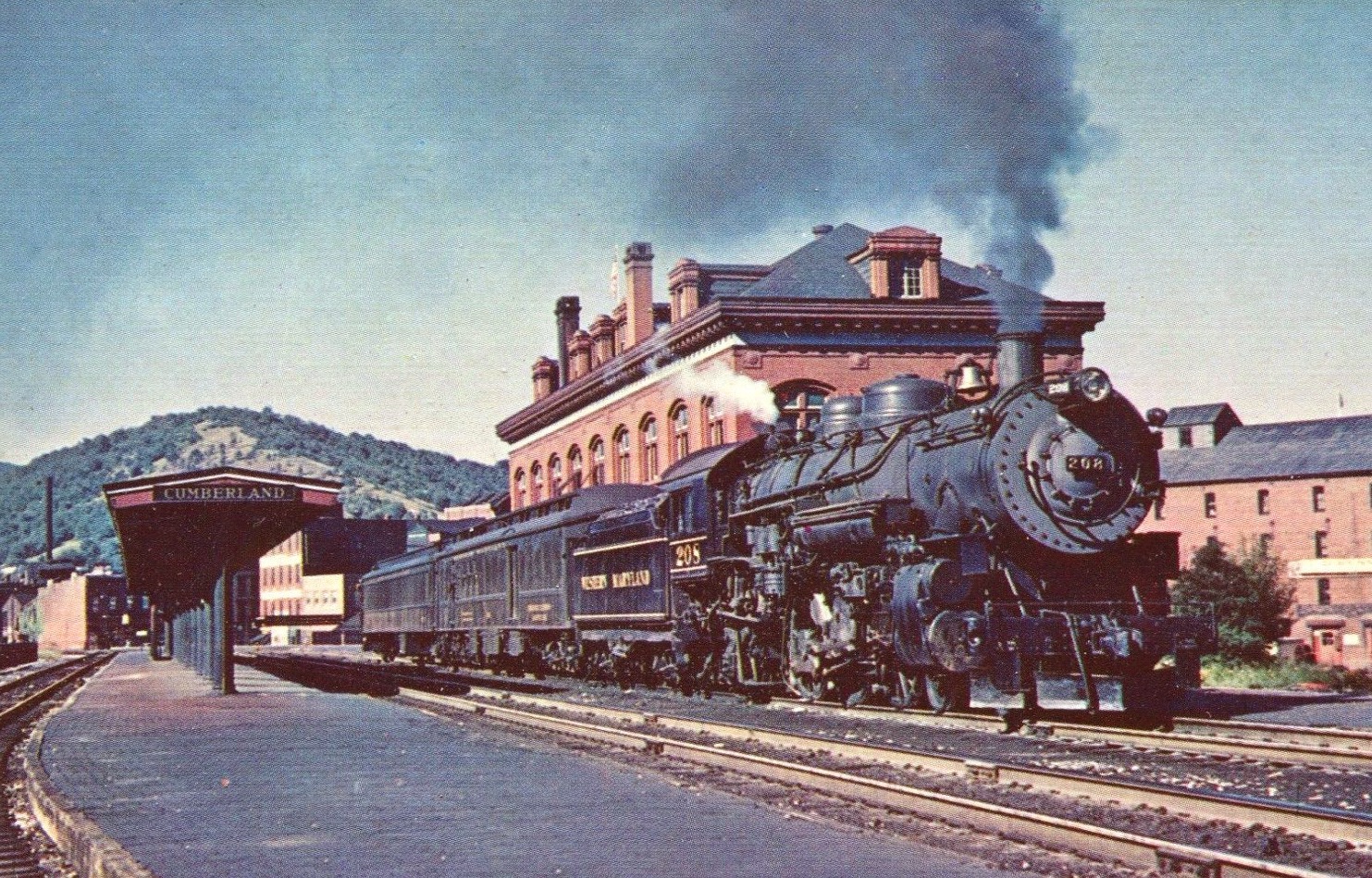 Western Maryland 4-6-2 #208 has only an RPO/baggage and coach as it departs eastbound from the railroad's beautiful station in Cumberland, Maryland on August 23, 1952. Bob Collins photo.

Perhaps the first to recognize the extreme advantages of steam power, at least in the U.S., was inventor Oliver Evans who was quoted in 1819 as saying, “I do verily believe that carriages propelled by steam will come into general use, and travel at the rate of 300 miles a day.”

However, all of this changed after 1804 when the first steam locomotive was built by Richard Trevithick and Andrew Vivian for the narrow gauge Penydarren tramway in Wales.

Later, the first American-built example tested on the Baltimore & Ohio Railroad in 1829, now known famously as the Tom Thumb (while the locomotive, built by Peter Cooper, actually lost the race with the horse [just barely!], it more than proved its ability as a reliable source of mechanical transportation).

Other early steam locomotives that gained fame include the Stourbridge Lion, America, John Bull (all of which came to the U.S. from English builders), and Best Friend of Charleston (more information about these machines can be found in the steam locomotive section).

Thus began the age of steam and a better, more efficient, means of transportation. Not only that but the steam locomotive was also a major driving force in settling America west of the Appalachian Mountains.

In general early passenger trains, especially during the railroad industry's early years, were relatively dangerous. While steam allowed for faster, and a more efficient means of transportation, this did not necessarily translate into a safer way of travel.

Our country’s first railroads like the B&O, Mohawk & Hudson, Albany & Schenectady, South Carolina Canal & Railroad, and others used mostly trial and error in learning what worked and what did not which, unfortunately, sometimes resulted in injuries or deaths.

This caused tracks to go out of alignment causing derailments. 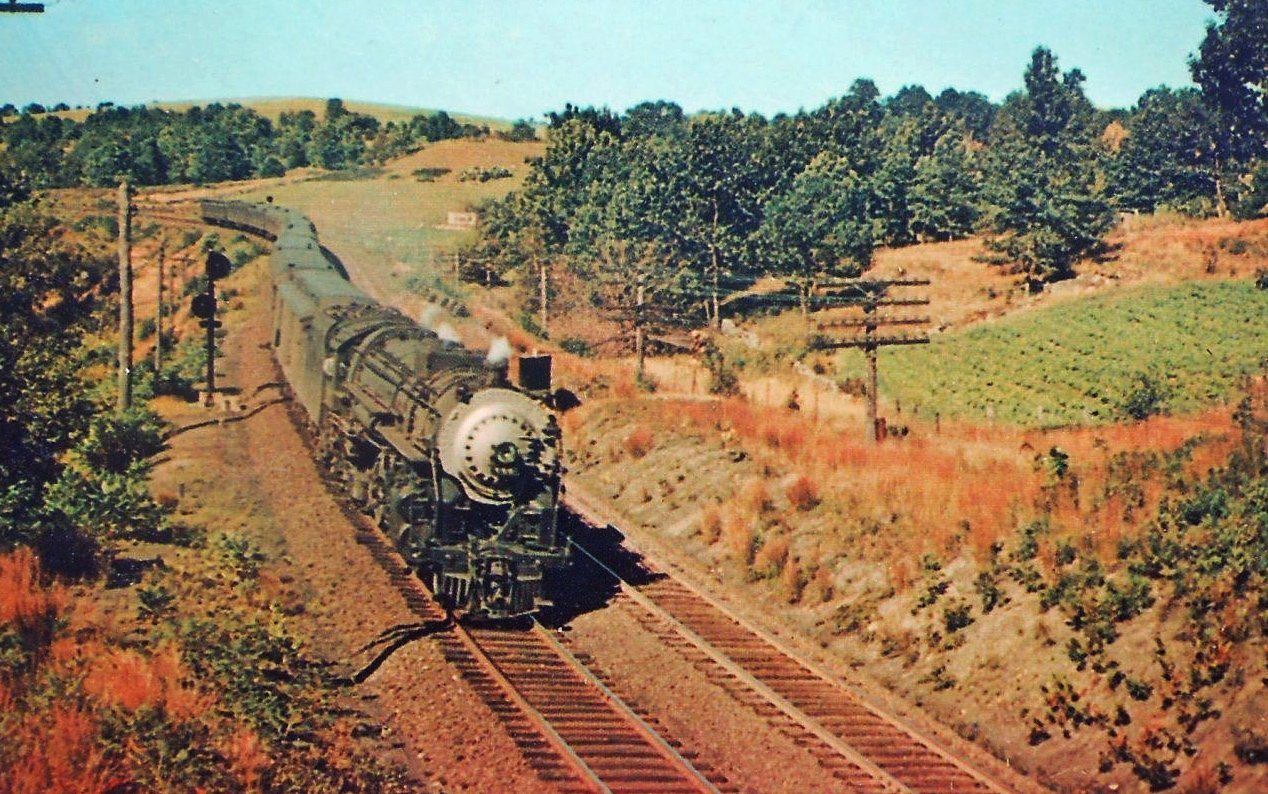 Boston & Albany 4-6-4 #600 (J-2) leads a passenger consist through the Berkshire Mountains of western Massachusetts during the 1950s.

As the industry greatly expanded during the 1850s railroad tycoon with endless bank accounts were more interested in earning more money for themselves than concern for public safety (this lack of safety foresight helped bring stiff, arguably overbearing government regulation, which later in the 1960s and 1970s resulted in the near collapse of the industry).

Additional problems for early passenger trains included Indian sabotage and attack, particularly an issue in Western states where Native Americans fought for control of their land.

After years of bitter fighting, for better or worse a truce finally came in the way of Native Americans ceding defeat and settling for peace (which resulted in today’s many Indian reservations).

When Were Trains Invented?

When were trains invented?  The answer to that question is not as straightforward as it might first seem.

The railroad's creation required more than two centuries of development before George Stephenson is credited with engineering and developing Britain's Stockton & Darlington Railway.

After chugging down the tracks on September 27, 1825 it soon found its way stateside where the Delaware & Hudson Canal Company tested Foster, Rastrick & Company's 0-4-0 Stourbridge Lion less than 4 years later.

The very first operation which could be described as a railroad was also found in England when a contraption with wooden rails, utilizing wooden ties for later support, was opened in 1630.

It was used solely to handle coal.  During the 18th century a number of devices were invented which later found their way into railroad applications, such as iron rails, the flanged wheel, and the steam engine.

Officially, trains were invented when Englishmen Richard Trevithick and Andrew Vivian received a patent for the world's first steam locomotive in 1802.

The little unnamed machine was placed into service on the Penydarren Ironworks' tramway in Merthyr Tydfil, Wales on February 21, 1804.

It hauled 10 tons of iron that day to nearby Abercynon and the railroad officially was born.  Once again, however, George Stephenson is credited with placing the first modern railroad into service nearly two decades later, perhaps partially due to the publicity he is given more widespread recognition.

It was also along the Stockton & Darlington Railway is also credited with hauling the first trainload of passengers.  That morning in September of 1825 the railroad hauled 12 waggons of coal and a waggon of flour bags across the Gaunless Bridge to the bottom of Brusselton West Bank.

After the train arrived at Shildon Lane End, Locomotive # and a rather significant train of 21 additional coal waggons, specially fitted with seats, welcomed nearly 600 patrons!

This was nearly double what officials had planned for as some folks simply rode atop waggons of coal.  The Stockton & Darlington proved a grand success and paved the way for the railroad's application in America, as well as around the world!

As the years progressed so too did the track structure and equipment. In 1831, Robert L. Stevens, of the Camden & Amboy Railroad developed the common “T-rail,” which is the design still used exclusively today as railroad rail.

First made of iron it was later produced using much stronger steel. Railroads also found that stone gravel (known as ballast) acted as stronger support base that did not give way like the large stone blocks (as it was much more forgiving).

Other important inventions for early passenger trains (as well as freight transportation) included the knuckle-coupler from Major Eli H. Janney in 1868 - it replaced the deadly link-and-pin system that often times resulted in the maiming of limbs and fingers - and the air-brake from George Westinghouse, introduced a year later in 1869.

This new device allowed for a constant stream of pressured air that could automatically apply brakes throughout the train instantly, rather than having the brakeman do the dangerous task of walking across car rooftops on a moving train to manually apply brakes to each car. 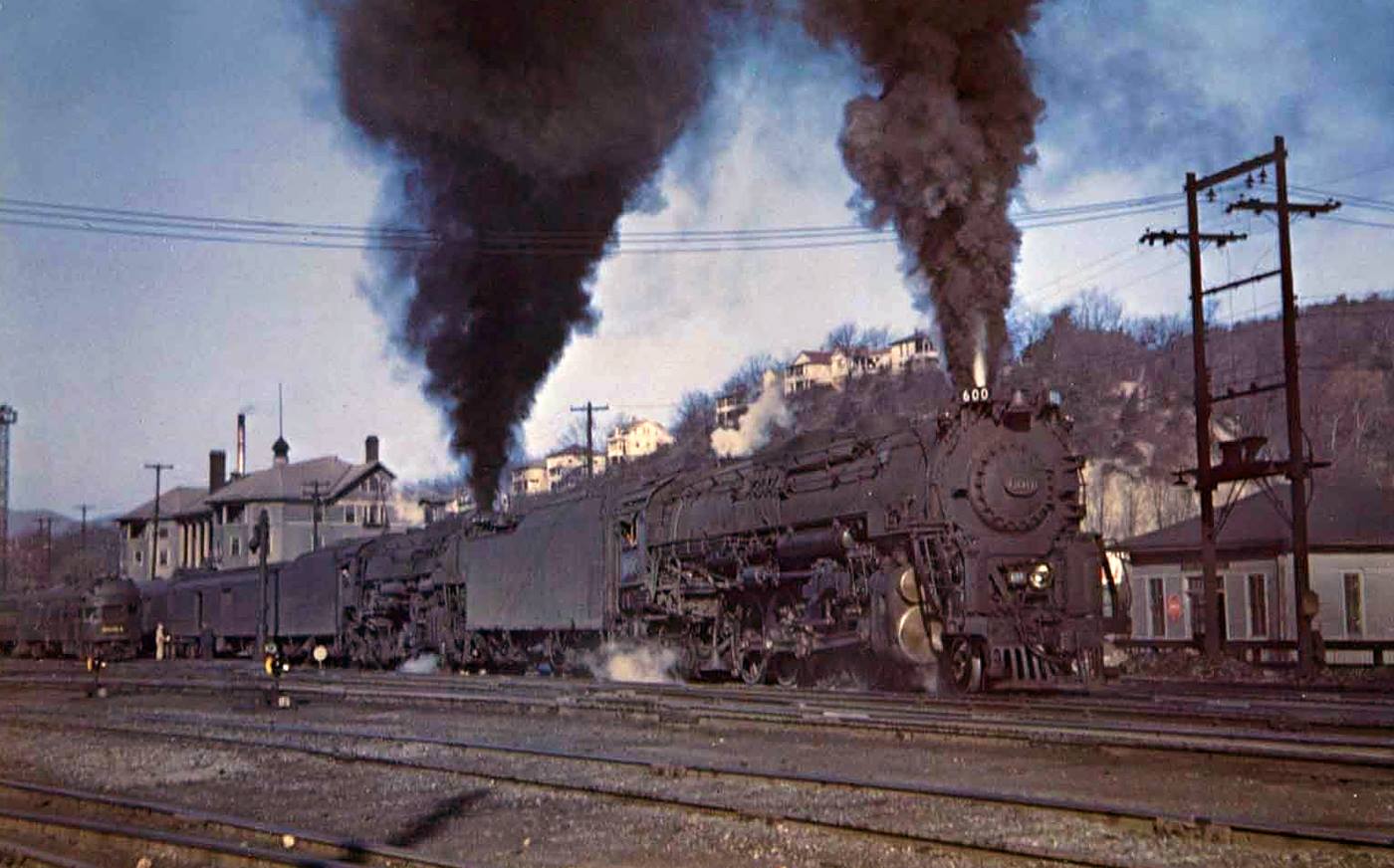 All of these early inventions are still widely used throughout the industry, more than a century later.   The early equipment railroads employed was, naturally, quite primitive with passenger cars comprised mostly of simple horse-drawn stagecoaches with iron wheel axles simply attached to the bottoms.

Technologies quickly improved with two-axle trucks (these devices usually employ two wheel axles situated within a cast frame to support the car as well as provide cushioning for the ride via springs and suspension) becoming standard by the 1830s with the common passenger coach (a long, corridor-like car with seating to either side with an aisle in the center) also developed during the same decade.

With this foundation of equipment introduced by 1850 for early passenger trains, and the industry as a whole, new and better technologies helped make traveling by rail more comfortable, efficient, and faster (although safety and comfort would continue to improve in the succeeding years). 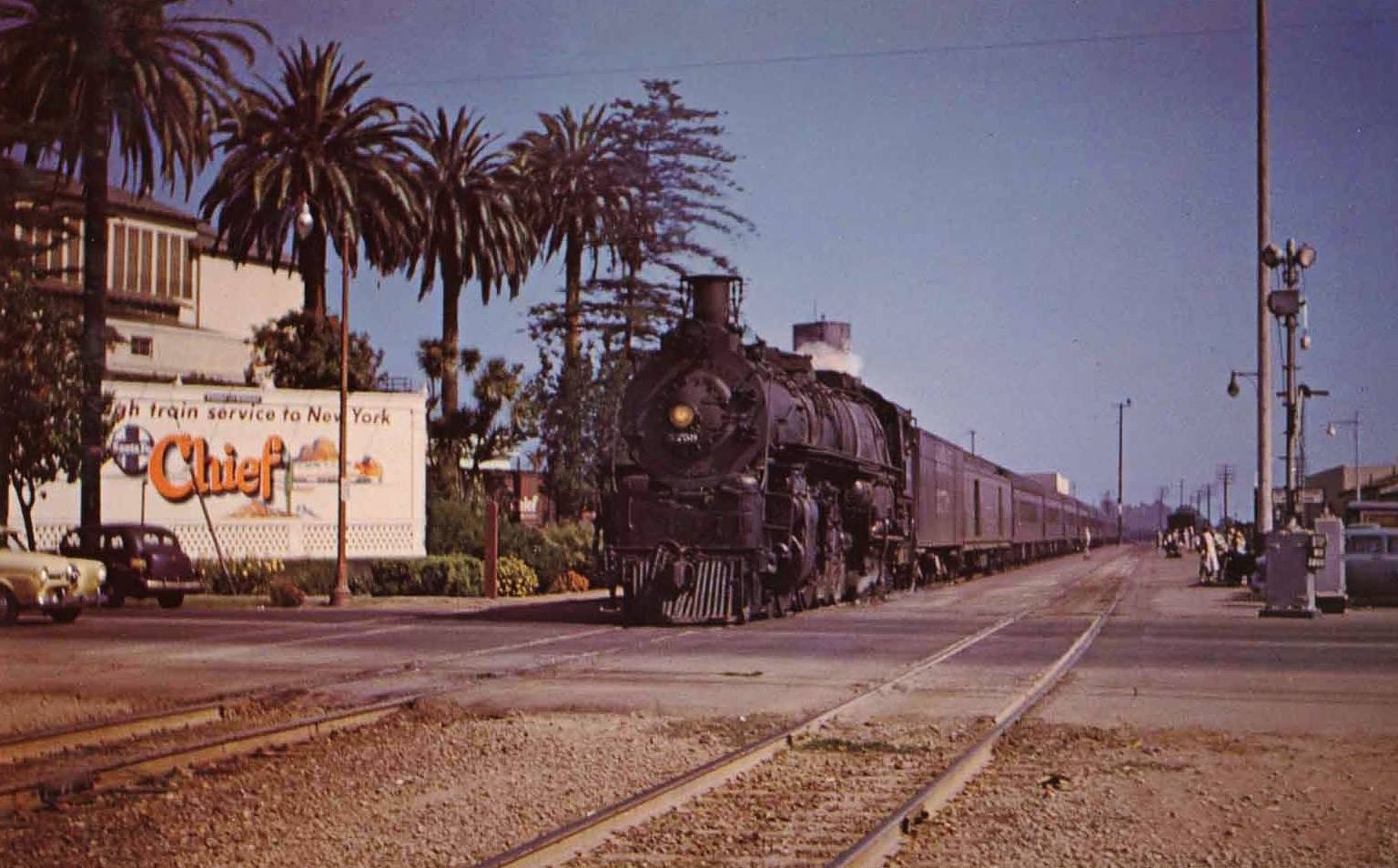 These included specialized cars like diners, sleepers, club cars, parlor cars, and observations. Likely the most famous passenger cars to ever grace the rails were those built by George Pullman and his Pullman Palace Car Company, which began building cars in 1867 (later reorganized as just the Pullman Car Company).

Its base of operations was Pullman, Illinois and its cars would become legendary by the peak of passenger rail travel in the late 19th century through the mid-1940s. While the company is perhaps most famous for its sleepers it also built other types of cars like parlors and diners.

By the 20th century, particularly by the 1920s, rail travel was truly becoming a smooth, comfortable experience; cars were stronger (steel, and later aluminum was used), quieter, and offered an increasing level of amenities and accommodations.  To read more about the streamlined era please click here.

When Were Trains Invented?