When one views the Ellicott City station today there is nothing particularly striking about it, when compared to other railroad depots like it.

However, the station carries a significance far beyond its looks, as the building is our nation's oldest still-standing railroad depot, constructed by the Baltimore & Ohio Railroad.

What's more is that the depot's design would become the template for which most others like it would be constructed over the next century.

Aside from the building's architectural and historical significance, however, it did not offer much else for the B&O as the little community provided little online freight and passenger traffic.

Today the Ellicott City Station is a museum (part of the Baltimore & Ohio Railroad Museum) and owned by the town of Ellicott City, Maryland. 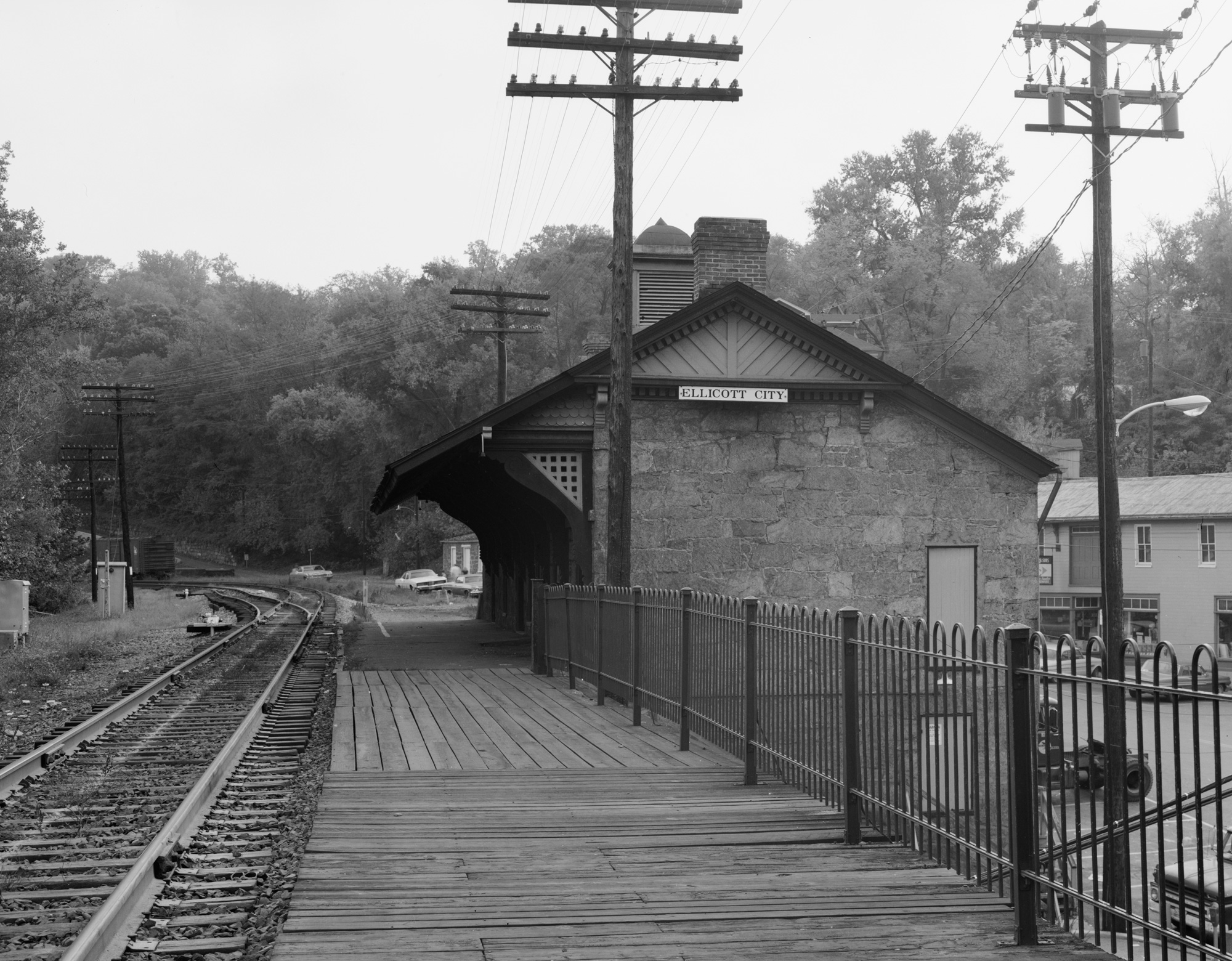 The Ellicott City Station, originally known as Ellicott's Mills Station, has an indelible link to the Baltimore & Ohio; it was not only the railroad's first depot but also the first hamlet it reached building west from Baltimore.

Three years after its charter the railroad had reached the then small community of Ellicott's Mills and initially did not even build a passenger station but a freight depot to serve the small industrial center located there.

The small depot also held significance as the original main line of the B&O (despite a later alignment trumping the route through Ellicott's Mills it is still in use today, known as the "Old Main Line).

In the early years, Ellicott City Station did hold a bit of importance to the B&O.  Before the railroad began its march westward the depot served as a western terminus for the B&O where its small fleet of steam locomotives was serviced and turned for the 13-mil trip back to Baltimore. 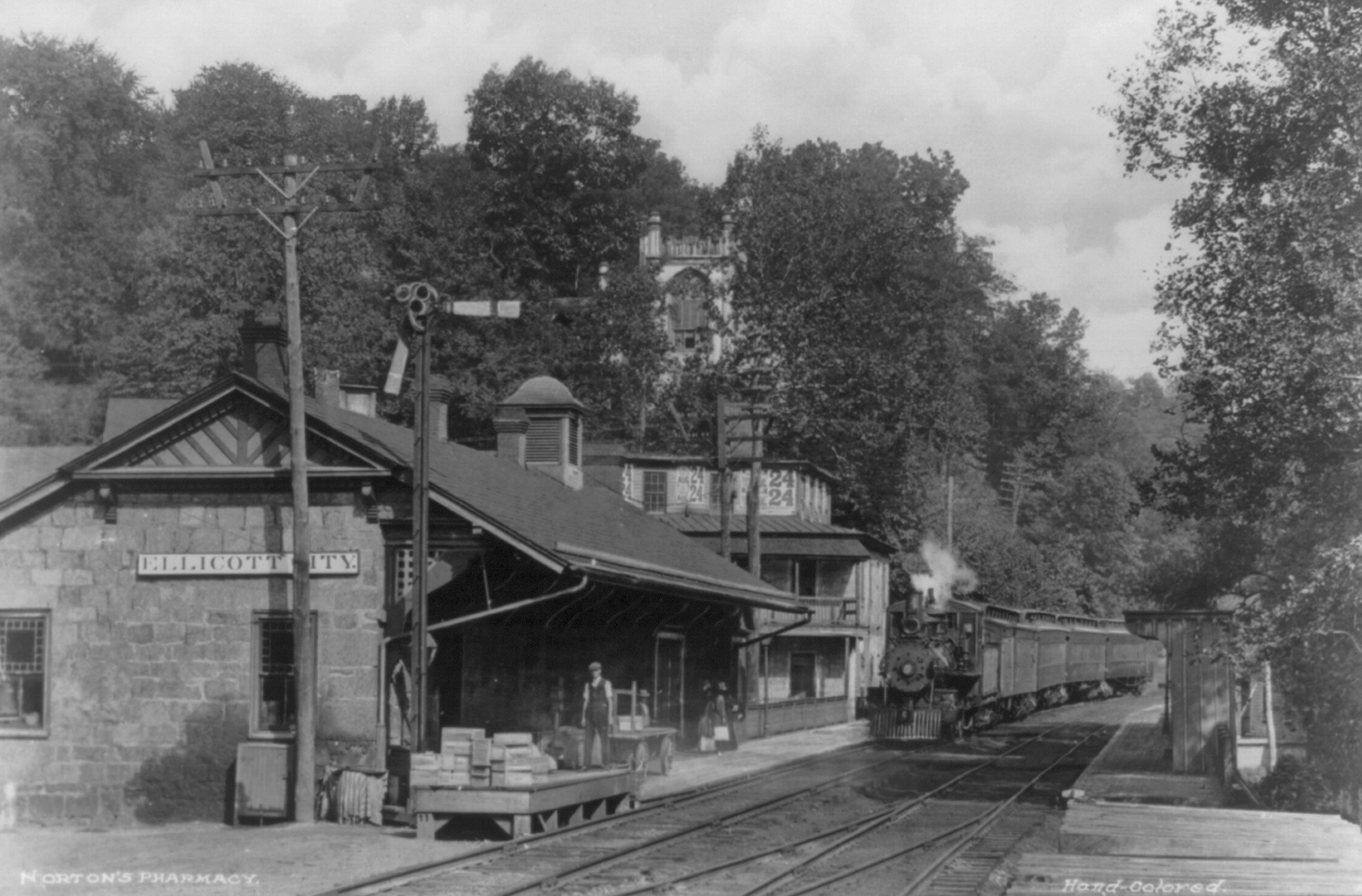 A view of the Baltimore & Ohio's Ellicott City Station as it appeared during the late 19th century.

Early on the location did not have a turntable although one was later installed during the Civil War in 1863. Additionally, the depot was actually a two-story building with only the second-floor at track level. 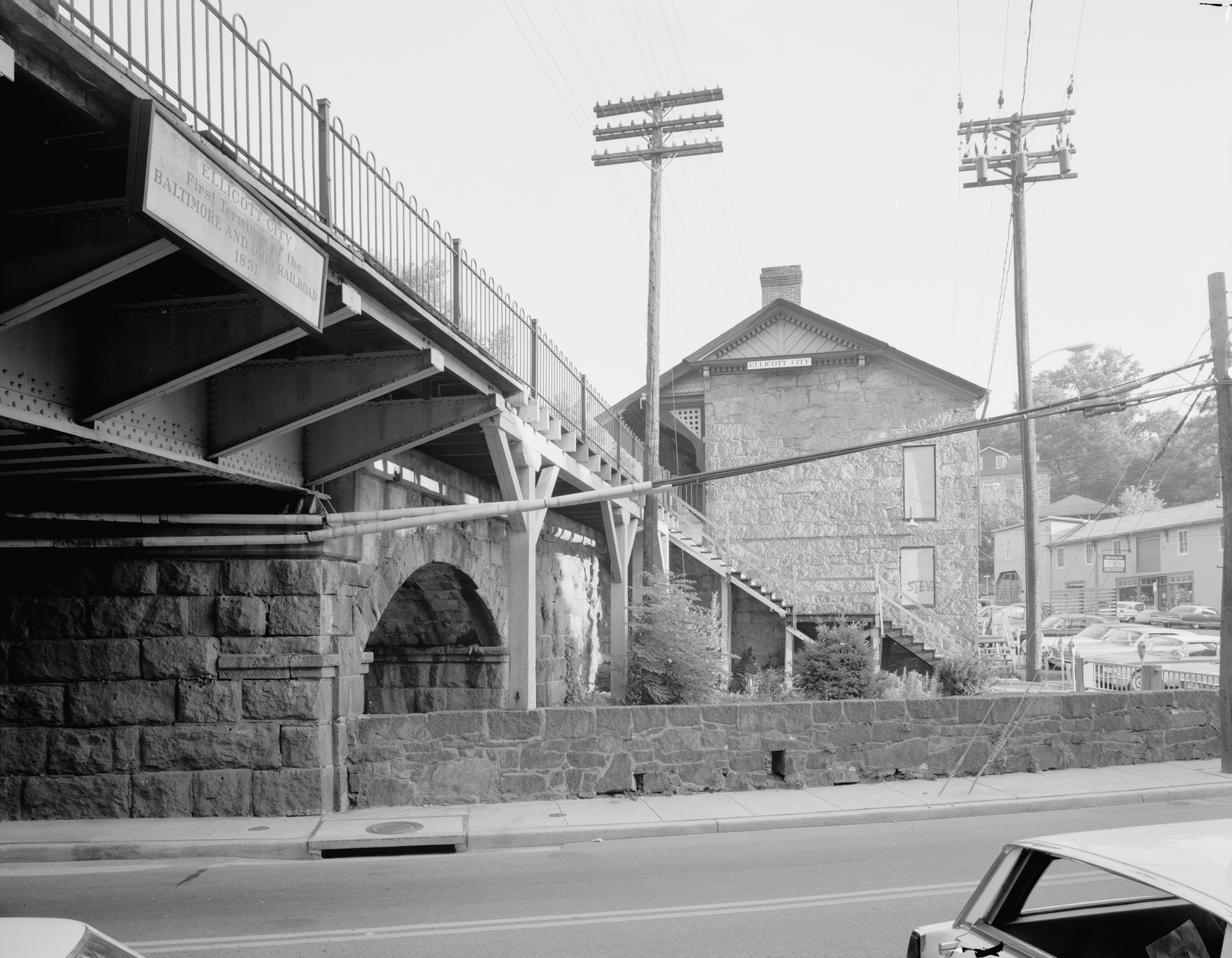 The railroad came to realize that, at least for a time, Ellicott's Mills would be the western edge of its system and as such constructed the Oliver Viaduct directly on approach to the depot.

Overall, the depot featured a simple gabled roof with a small central cupola. The overhang it featured covering the boardwalk is what really set it apart and was a design that most future small depots would use, allowing passengers to remain dry even while outside in poor weather. 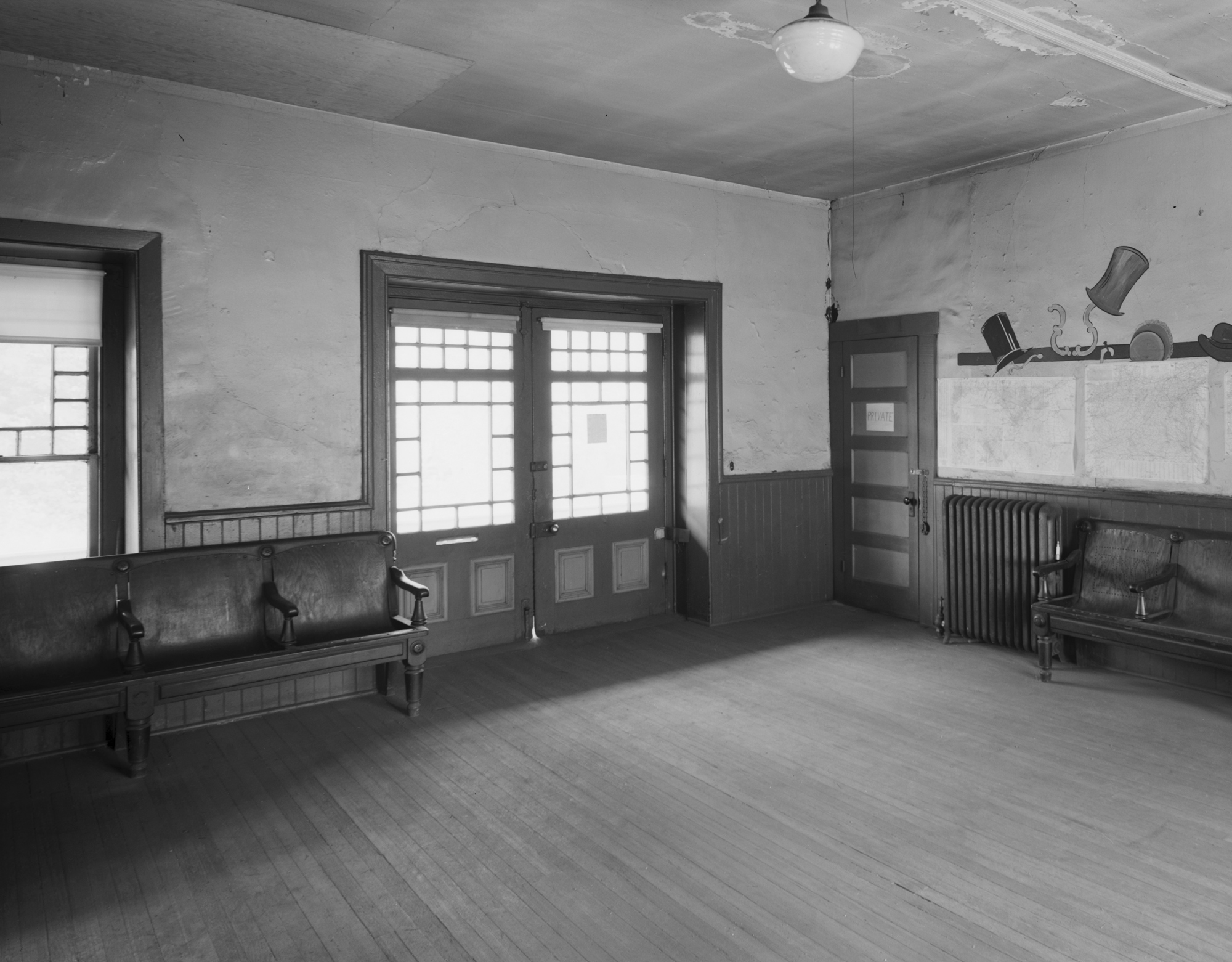 An interior view of the Ellicott City Depot circa 1970. William Barrett photo.

The depot's freight importance was mostly during its early years when a local granite quarry, known as Ellicott's quarries, supplied the B&O with a substantial amount of tonnage while in use (the granite also helped build the depot as well as the later turntable).

Aside from the quarry service, the B&O only saw freight from nearby farms and locals.  Overall, however, as for Ellicott City Station itself its importance would never really transcend further than its significance as our country's oldest railroad depot (which was originally built in 1830).

Ellicott City's magnitude for the railroad, at least in terms of a passenger hub, would quickly dwindle following the 20th century and by 1949 trains stopped serving the depot altogether.

By the early 1970s the B&O itself, by then part of the Chessie System (the C&O, B&O, and WM united under one flag), would discontinue use at the station. Fortunately, however, the building's future had already been secured when a few years prior to that in the late 1960s it was placed on the National Register of Historic Places. 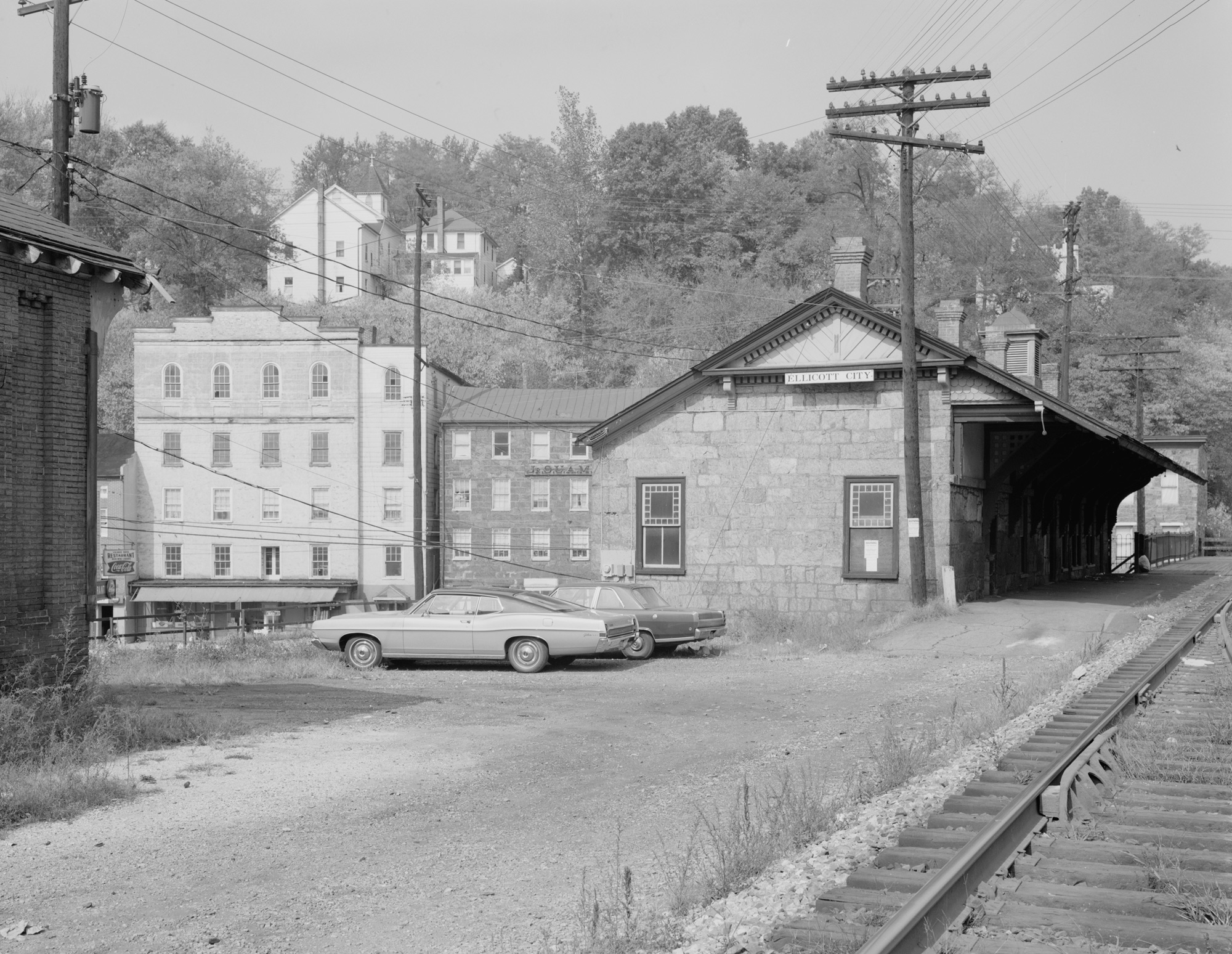 Ellicott City Depot circa 1970. Directly where the vehicles are parked is the location of an original turntable, buried but completely intact. It has since been unearthed and can now be viewed. William Barrett photo.

It would take, however, until the mid-1990s before the town would gain ownership of the station when at that time CSX Transportation, the successor to the B&O and Chessie System, deeded the building over to Ellicott City.

Along with touring the building, learning about its history, and seeing the items on display the museum also houses a large model layout and has a number of events and programs ongoing throughout the year to take advantage of.