The Erie Western Railway, (reporting mark, ERES), was created as a means of preserving rail service over the former Erie Railroad main line in Indiana during the late 1970s.

It was unwanted by the Consolidated Rail Corporation, Conrail, after it began in 1976 and facing abandonment the route was purchased by local investors.

Initially, the ERES had a rather diverse traffic base and became known, somewhat, in the railfan community for its use of first and second-generation American Locomotive Company (Alco) road-switchers.

However, try as it might the railroad's income quickly eroded away and within two years of its startup the Erie Western filed for bankruptcy, ending all services.

Another short line formed in its place but had no better luck with the little remaining traffic available. Today, most of the Erie/EL line is now but a memory although some sections have been converted to hiking trails. 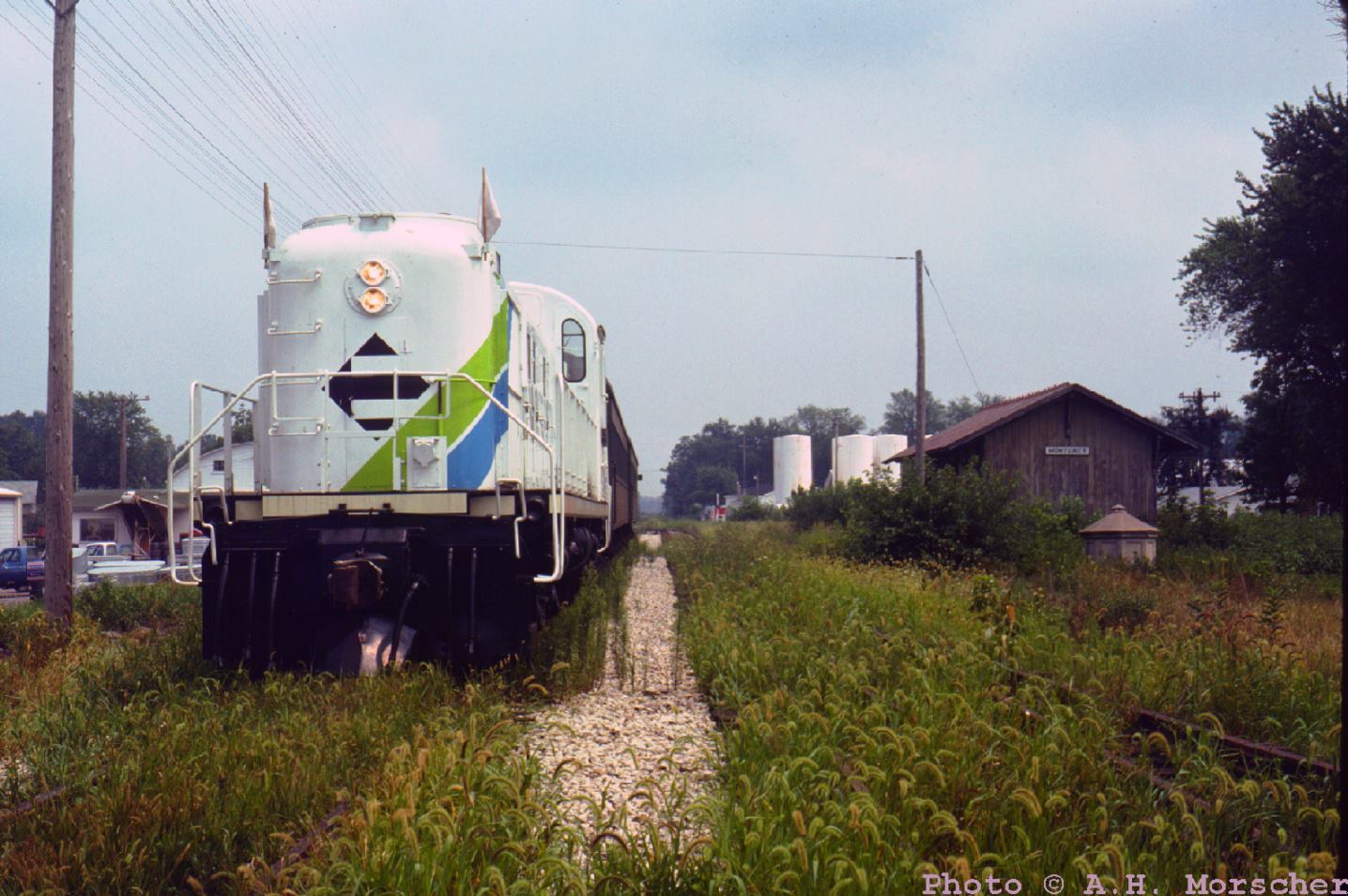 The sad, final days of the "Friendly Service Route." Erie Western RS3 #1603 hosts an excursion for the Erie Lackawanna Historical Society as it eases along through Monterey, Indiana on the former EL's weed-infested main line on August 12, 1978. Arnold Morscher photo.

The history of the Erie Western Railway can be traced back to the early 1970s when the Erie Lackawanna was struggling to survive following the aftermath of the Penn Central bankruptcy and the industry's weak position in general.

Then in the fall of 1972 Hurricane Agnes wreaked havoc on the EL's eastern lines forcing it into bankruptcy as well. After a failed purchase by the Chessie System it was finally decided that the eastern trunk would be included within Conrail.

Unfortunately, however, Conrail saw far more potential in many of the ex-PRR and NYC routes over the EL's including its Chicago main line. Soon after it began on May 1, 1976 Conrail embargoed or abandoned much of it system west of Ohio.

However, the tracks between Wren, Ohio west to Hammond, Indiana were spared, purchased by a collective group of shippers which hoped to retain rail service over the property.

To do so the Trans-Action Associates was created, headed by Craig Burroughs, forming the Erie Western Railway in August of 1977.

The company gave them a classy but very 1970s livery of white with a blue/green band. In all, the ERES would operate 158 miles of the original Erie route (it also operated a 27-mile branch from Decatur to Portland, Indiana) and thanks to an Interstate Commerce Commission (ICC) stipulation trackage rights were even granted directly into Chicago over the Chicago & Western Indiana.

By the late 1970s the C&WI was a shell of its former self since it no longer served in its original role of keeping passenger trains flowing into and out of Dearborn Station. 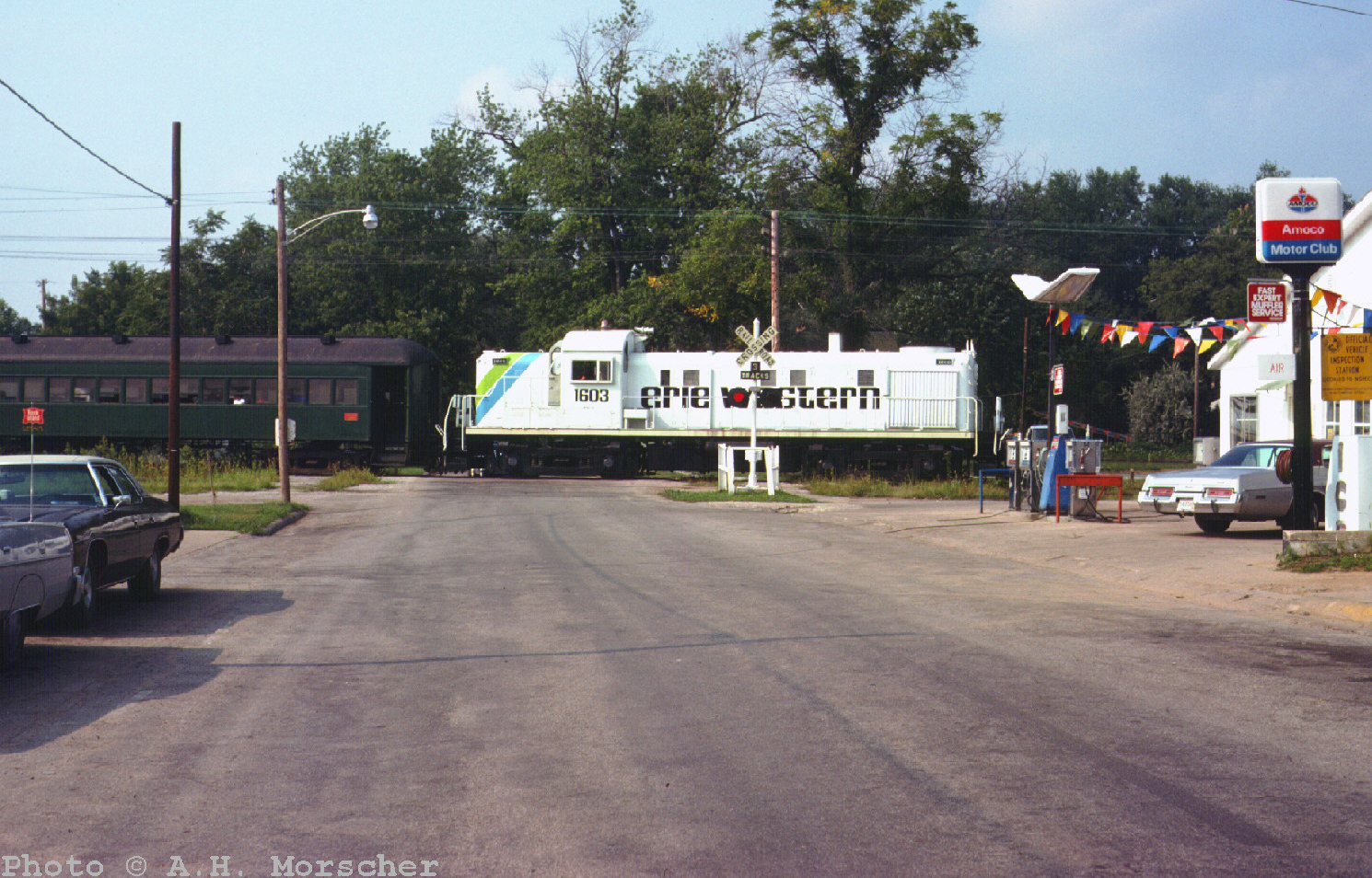 Erie Western RS3 #1603 hosts an excursion for the Erie Lackawanna Historical Society as it rolls through a grade crossing in the small town of Monterey, Indiana on the former EL's weed-infested, double-tracked Chicago main line on August 12, 1978. Arnold Morscher photo.

By those days it essentially acted as a terminal line, operated by the Belt Railway of Chicago.

Regardless, these trackage rights enabled the ERES to interchange with many of the Windy City's major Class Is including the Santa Fe, Erie Lackawanna, Grand Trunk, Louisville & Nashville, and Norfolk & Western.

Ironically, while the railroad reached Chicago its main offices were located in Huntington, Indiana along the eastern end of the system (this town was also the company's primary engine and maintenance facility).

Aside from its interchange partners the Erie Western initially had a diverse level of traffic; this was based predominately in agriculture and also included food products, lumber, fertilizer, steel, general merchandise, and plastic. 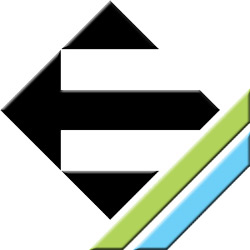 Unfortunately, the road's early success was short-lived.  Following a promising start, its traffic base quickly eroded and the railroad filed for bankruptcy on June 24, 1979.

It fell apart so quickly that the company did not even have time to paint its entire fleet of Alcos into ERES colors as the C420s still carried former Long Island Railroad paint with number patches.

The west end of the Erie/Erie Lackawanna's main line was largely devoid of traffic compared to the railroad's network east of Ohio.  However, given the nature of railroading post-1980, the ERES would likely have survived if provided with state/federal grants and subsidies to improve its infrastructure and service.

Alas, during the 1970s the industry was on the precipice of failure.  As a result, the public, and state/federal agencies, generally had little interest in railroads as an old-fashioned mode of transportation.

In addition, the short line movement was only beginning and there was no subsidies available to improve failing infrastructure.

Following its bankruptcy, the Chicago & Indiana Railroad was formed to try its hand at keeping the property alive but with funding shortfalls it failed too before the end of 1979 on December 31.

One final attempt along a 16-mile stretch between North Judson and Monterey was operated by the Tippecanoe Railroad.

This section survived for over a decade, mostly serving a grain elevator near Monterey until 1990 when it was renamed as the JK Lines.

The trackage was eventually acquired by historic shortline Toledo, Peoria & Western which filed to abandon it after the grain elevator shutdown in 2003.

Today, roughly one-mile of this section remains around North Judson preserved for use by the Hoosier Valley Railroad Museum.

However, the rest of the original Erie Western Railway route has long since been scrapped although a number of locations have been retained as walking rail/trails, such as the Monterey Bike Trail.

Following the end of short line operations over this trackage in 1979, the Erie Lackawanna Estate, which still owned the property, realized its real estate value far outweighed any potential return from rail service.

The estate still owed millions in debt and disposing of the real estate offered an immediate solution to this problem.  As a result, all right-of-way, structures, rail, signaling, and anything else of scrap value was sold to the L.B. Foster Company.

This organization, in turn carried out the scrapping operation and sold the right-of-way to farmers and for commercial developments.  By 1983, most of the right-of-way was devoid of rail and other structures.

Today, few traces of the Erie's Chicago main line are still intact across the Midwest although the wide right-of-way and many relics related to such can easily be spotted.