The Essex Steam Train is the name for the Valley Railroad's popular excursion operating on a former New York, New Haven & Hartford (the "New Haven") in south-central Connecticut.

It offers one of the only locations within the state to ride a heritage railroad, and the only excursion to do so using authentic steam locomotives over a distance of more than 20 miles.

As a result it has grown into a popular attraction over the years since it first began hosting public excursions in the early 1970s.  Today, the railroad offers trips during much of the year, including special events for the holidays, and also features boating galas. 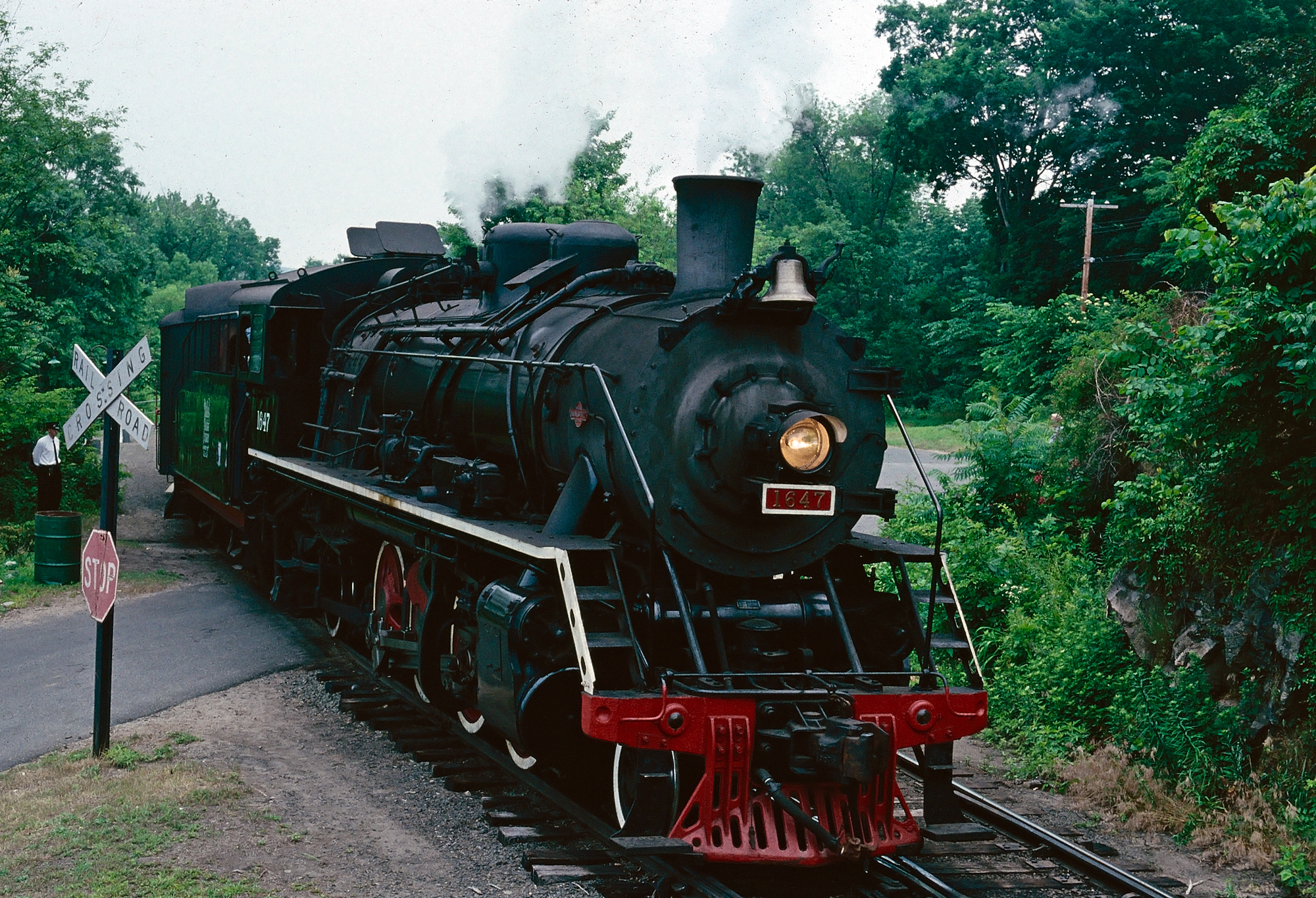 The history of the Essex Steam Train begins on July 17, 1868 when the Connecticut Valley Railroad Company (CVRR), headed by successful businessman James C. Walkeley, was granted a chartered by the state with intentions to construct a new line from Hartford, south to Saybrook Point near Old Saybrook, along Long Island Sound.

The idea for this route was a long-sought project of Walkeley's who first drew up the idea in the mid-1840s.

Survey work on the CVRR began later in 1868 with actual construction commencing in April of 1870.  The line's groundbreaking took place at Higganum, located at roughly the halfway point.

While the entire line would only stretch 45 miles its construction was broken down into three phases.

From north to south these segments included: the Northern Division between Hartford and Middletown; the Middle Division to Goodspeed Landing; and finally the South Division completing the line to Saybrook Point.

Thanks to relatively gentle topography no tunnels or significant bridges were needed and the project moved swiftly.  By the summer of 1871 the route was completed with regular service commencing on August 24th.

According to the Essex Steam Train's website, the first scheduled trains included "...one mixed (passenger and freight) and four passenger trains each way daily (except Sunday) with fifteen stops along the way."

Unfortunately, unfulfilled traffic potential resulted in financial troubles finding its way to the Connecticut Valley Railroad when it defaulted on its loans and entered receivership in 1876.

It was reorganized as the Hartford & Connecticut Valley Railroad (H&CV) on July 1, 1880 although future independent operation was short-lived.

The New York, New Haven & Hartford system was formed in 1872 through the merger of the New York & New Haven and Hartford & New Haven railroads forming one of southern New England's largest systems.

It steadily grew throughout the remainder of the 19th century, gobbling up the H&CV in 1882 and acquiring total control by 1892.

Valley Railroad 2-8-2 #40 (Operational. Originally built by the American Locomotive Company's Brooks Works in 1920 as Portland, Astoria & Pacific Railroad #101.  Later acquired by the Minarets & Western Railway and Southern Pacific before being sold to the Aberdeen & Rockfish.)

In the following years the New Haven amassed a system of more than 1,800 miles, comprising more than 200 predecessor companies.

It stretched from Boston to New York with a main line running near the Atlantic Coast and Long Island Sound between Boston and New York.

It also reached into the interior at locations such as Worcester and Pittsfield while lines also stretched to Nantucket Sound and Cape Cod Bay as far as Provincetown.

The New Haven became the unmatched leader in handling commuters and passengers between its two largest cities with a network that served virtually every major suburb while its electrified main routes offered high speeds and quick transit times.

The line now operated by the Essex Steam Train was never a particularly busy corridor under New Haven control and fell into primarily a secondary role of handling freight between Hartford and Old Saybrook.

However, the NYNH&H did facilitate property upgrades that allowed for speeds of over 50 mph.  As early as the World War I era service was reduced and by the 1950s consisted of only local weekday service.

By then the future of the New Haven looked bleak with growing deficits and declining traffic.  It entered bankruptcy in 1961, from which it would not recover before being included into the ill-fated Penn Central Transportation Company on January 1, 1969.

Saddled with its own problems PC did not need or want the New Haven.  It sought to sell Old Saybrook line, which was acquired by the state of Connecticut on  August 15, 1969.

Ultimately, the state authorized the Valley Railroad Company, largely a volunteer-effort, to lease and operate the moribund property beginning June 1, 1970 and officially began service in 1971.

While the state has granted the railroad to use 22.67 miles of the route from Old Saybrook to Middletown currently only about 13 miles host trains while work remains underway to restore the rest of the property.