The Everglades joined Atlantic Coast Line's timetable soon after the end of World War II.  According to Larry Goolsby's book, "Atlantic Coast Line Service: The Postwar Years," the train was actually not new, simply the naming of the Washington to Jacksonville section of the Havana Special.

If one so desired they could also catch connections on the Pennsylvania to New York or as far north as Boston over the New Haven.  For many years the Everglades provided accommodations archetypal with ACL's long distance services.

However, as patronage declined and services were cutback the train would become a coach-only operation.  Interestingly, it survived through the Seaboard Coast Line merger but was not retained into Amtrak.

The Havana Special is a rather legendary train; it was inaugurated by the Florida East Coast in early 1912 following the completion of the company's new Key West Extension through the Sunshine State's chain of tropical islands.

While visionary Henry Flagler constructed the expensive line for purposes relating to freight and a deep water port in Key West it also became noteworthy for its passenger service and the unparalleled pristine ocean scenery the route afforded. 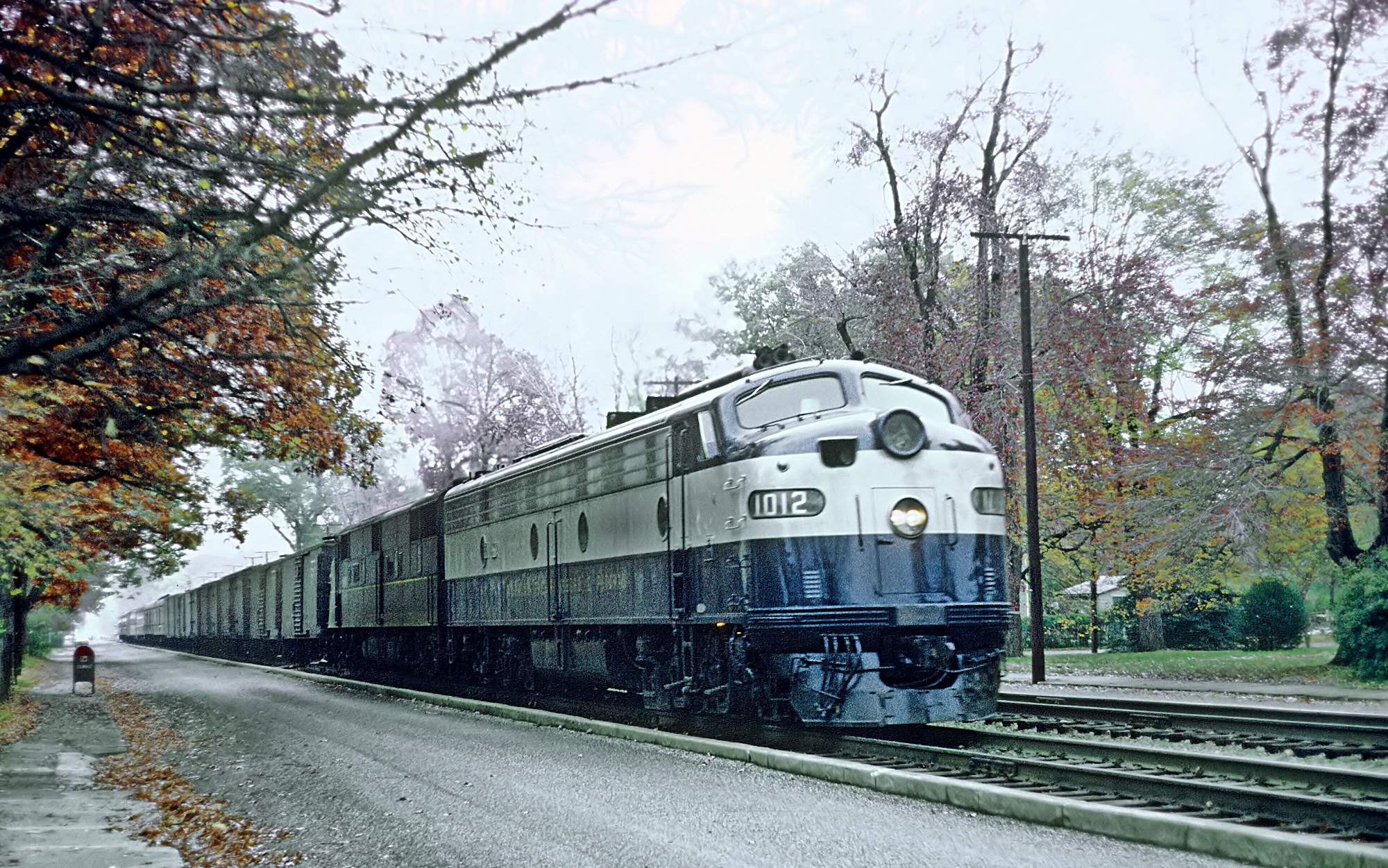 A Brief History Of "The Everglades"

The Havana Special not only served the Keys but also provided through service to New York in conjunction with the Atlantic Coast Line; Richmond, Fredericksburg & Potomac; and Pennsylvania railroads. The powerful Labor Day Hurricane of 1935 destroyed the Extension but the Special continued operating as far as Miami.

After World War II ACL elected to rename its leg of the trip and changed its numbers to 375, southbound, and 376, northbound.

Under the Coast Line's direction, including its departure and arrival from Washington Union Station the Everglades required about 23 hours to cover the distance to Miami and vice versa, which was about two hours slower than flagship Champion, launched early in the streamliner era during early 1939.

A decade later in 1949 the ACL had acquired enough new equipment or overhauled older cars that all six of its trains running year-round boasted at least coach-Pullman accommodations; these included the Everglades, both sections of the Champion, Miamian, Palmetto, and Havana Special. 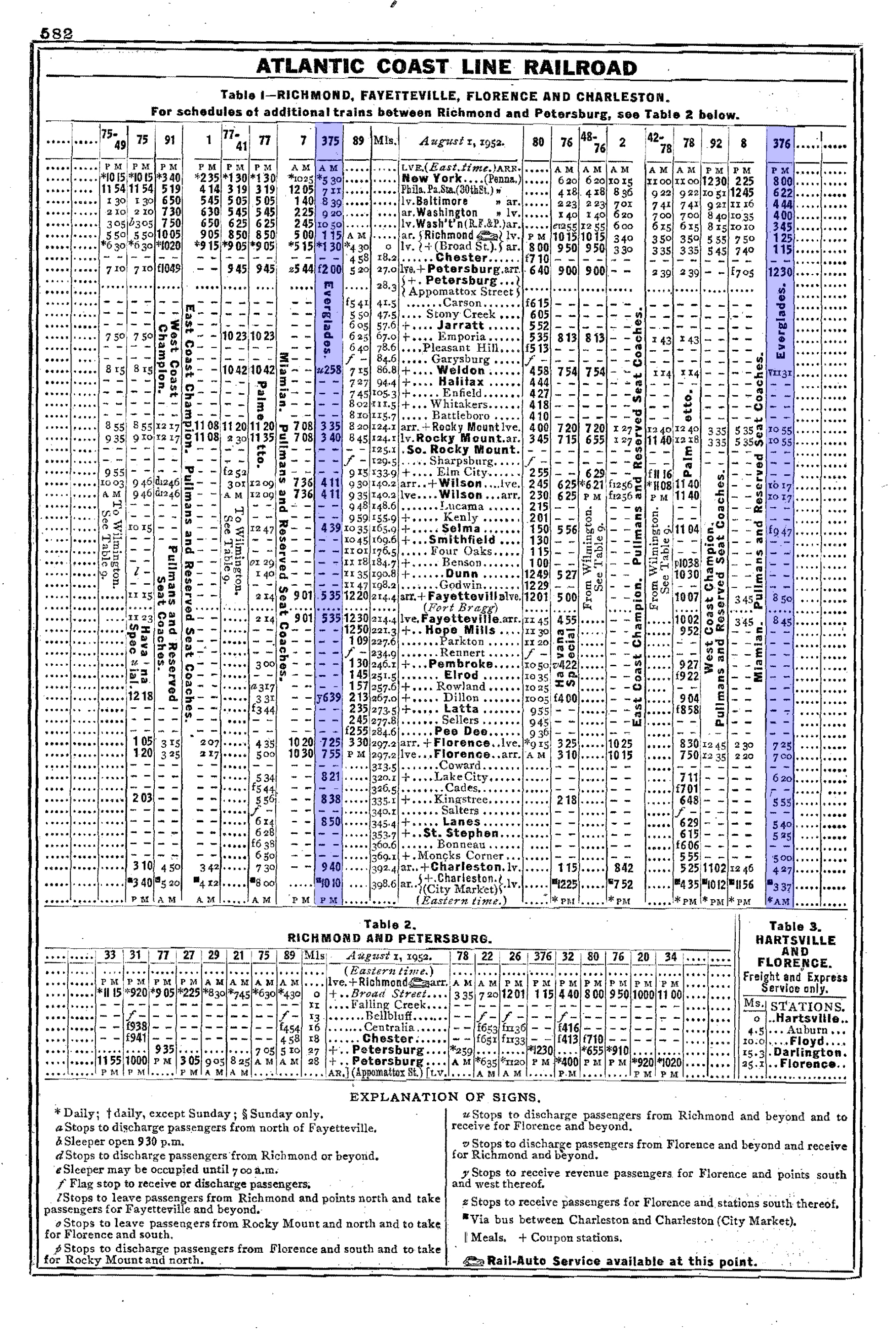 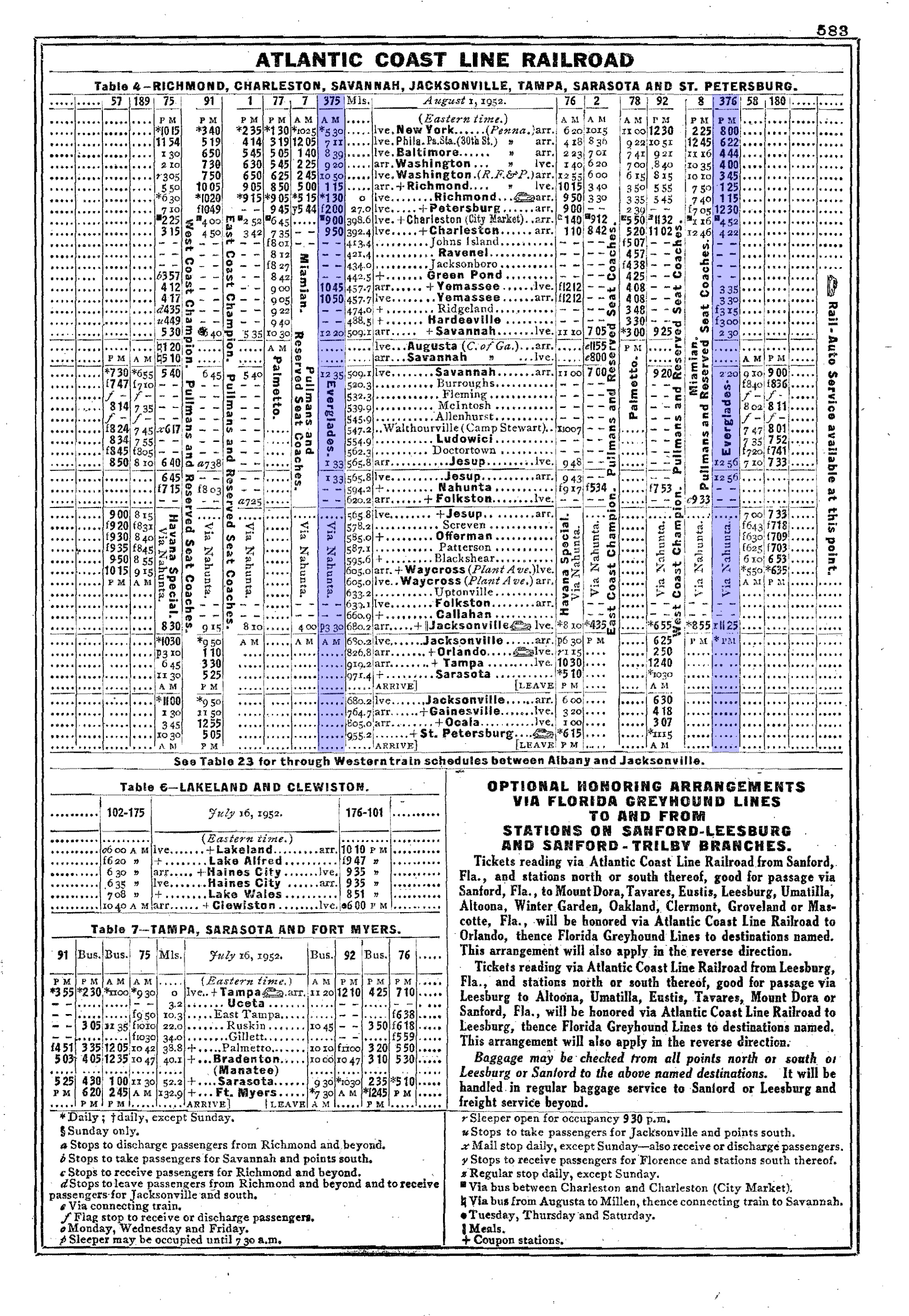 Because of its secondary status and more leisurely schedule the Everglades was laden with significant head-end mail and express, which it continued fielding throughout its time in service.

While the train, as a named consist, operated with steam power for only a few years Mr. Goolsby's book notes that it provided the fewest accommodations of all ACL's notable eastern services.

For instance, by 1950 the Everglades provided predominantly reclining-seat coaches along with one 8-section/2-compartment/1-double bedroom sleeper (Washington-Jacksonville), and a diner between Washington-Florence (South Carolina).

At that time, power normally was older diesel models such as E6s although in later years it typically ran with whatever was available from E8s to FP7s. 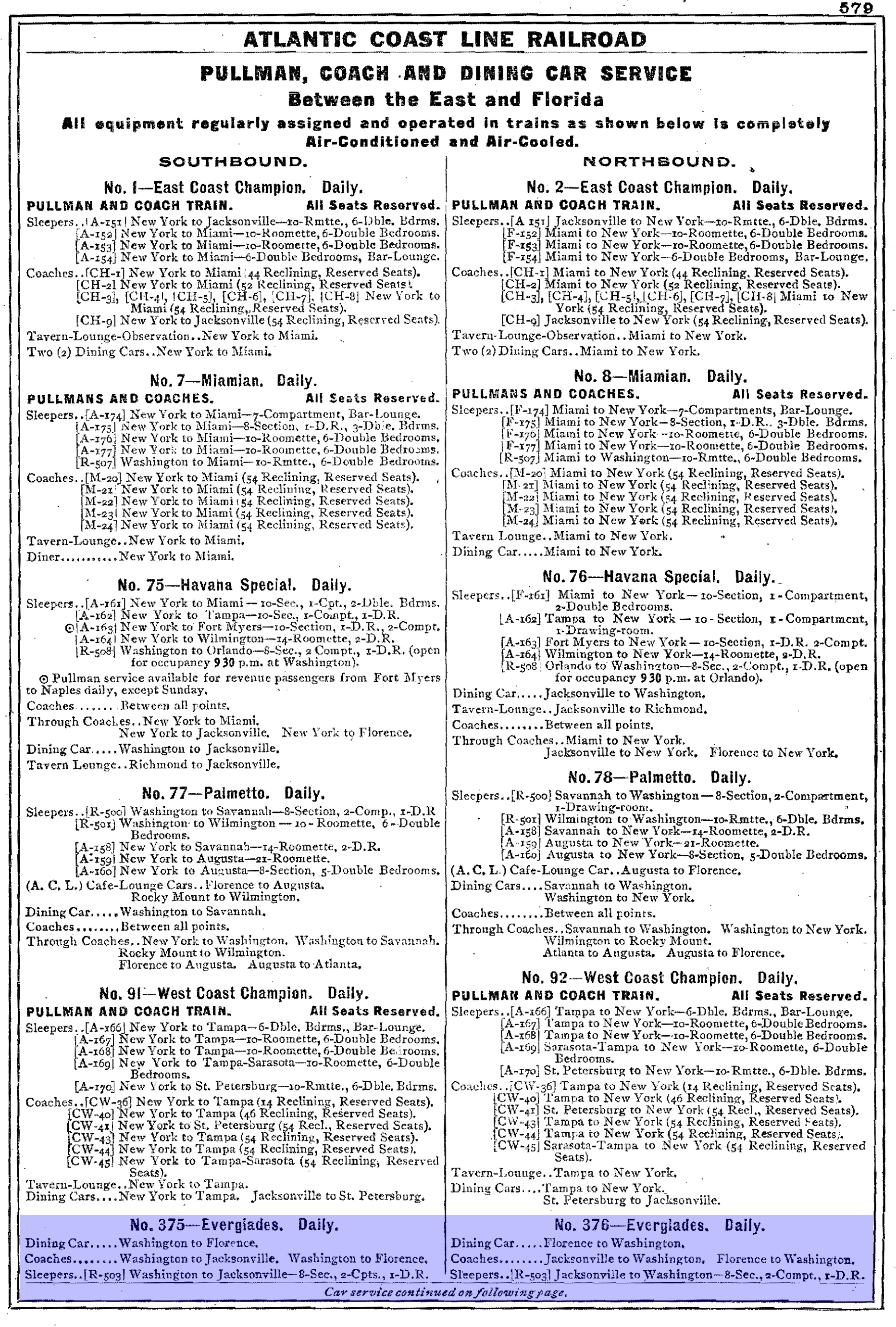 Considered the limited nature of amenities it's somewhat amazing the Everglades survived so long on the timetable and most likely remained so due to its lucrative head-end mail/express, which often comprised half its consist.

As the 1950s progressed the train continued to lose services, along with the Havana Special and Palmetto; beginning in 1959 dining service was dropped in favor of a café-lounge and a year later in September of 1960 the Everglades lost its final sleeper to become coach-only; from this time forward nothing considerably happened with the train.

During the ACL's last decade of independent operation it did something similar to that of the Southern; adding short blocks of expedited piggyback and auto-rack cars on the Everglades as well as other trains that were lightly patronized. 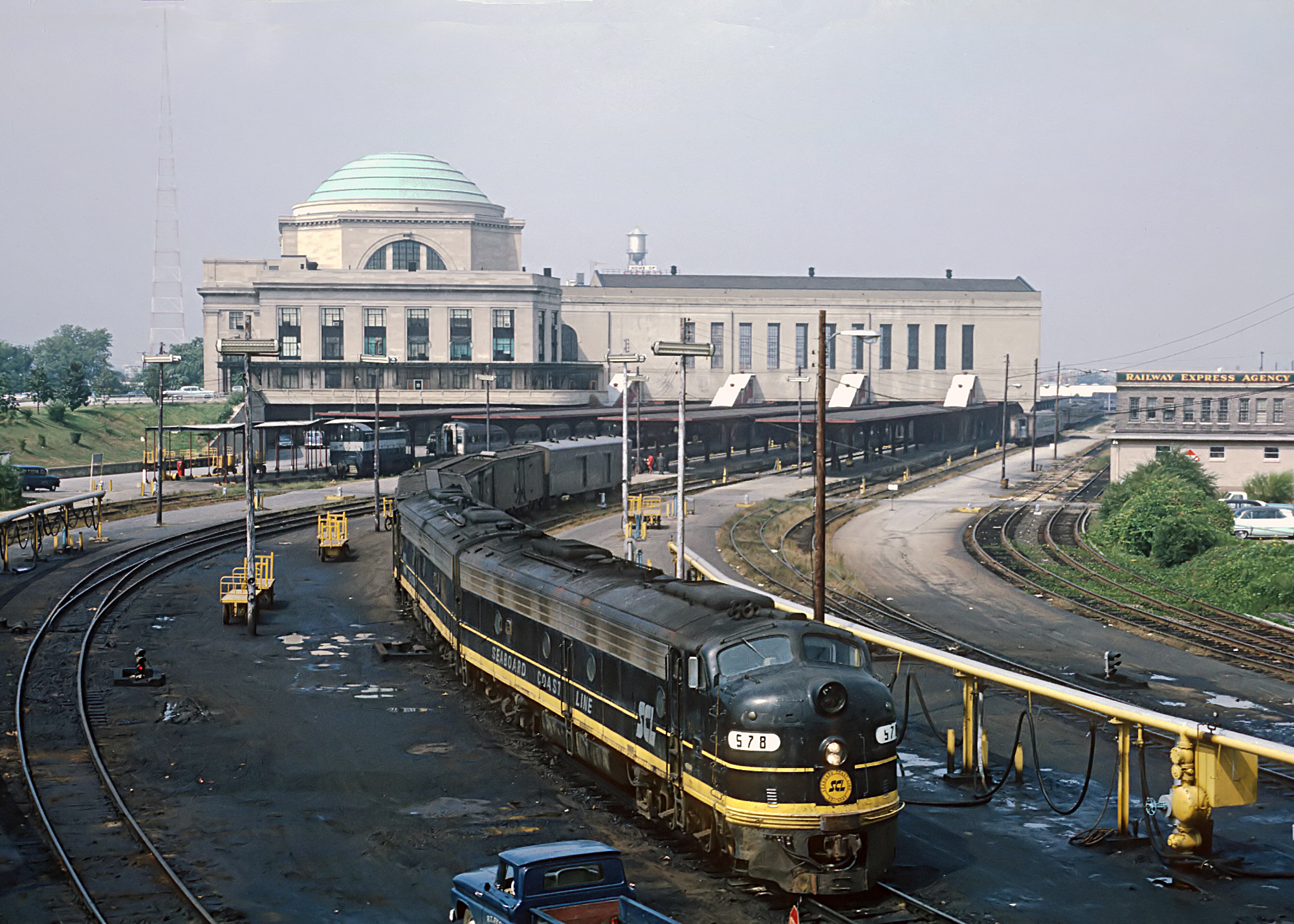 At the time both services were not nearly as popular as they are today and as a result ACL did not have enough business of either to justify dedicated, unit trains which made adding the cars to end of passenger consists a perfect match (by those years, of course, most railroads were losing interest in the appearance of their trains).

This practice would continue into the Seaboard Coast Line years, formed in the summer of 1967.  Under SCL direction the Everglades changed its numbers to 85, southbound, and 86, northbound.  Incredibly, the timetable still listed connections with the RF&P and Penn Central northward the entire way to Boston's South Station.

At that time the amenities included a baggage-mail, two reclining seat coaches, and snack service between Richmond and Florence.  Upon the startup of Amtrak on May 1, 1971 the Everglades was not retained.