In the 1990's the company truly cemented itself in first place with highly successful designs such as the C40-8/W, C44-9W, C40-9W, and the AC4400CW. Combined, these units sold several thousand examples.

Today's Evolution models simply followed the builder’s Dash 9s and were designed to offer just as much horsepower as conventional diesels but by burning much less fuel and in turn producing fewer emissions.

For the first several years, Evolutions were offered in only two models; the ES44DC and ES44AC, and de-rated ES40DC. In recent years GE had unveiled a more "old school" design, the A1A-A1A ES44C4.

Currently, only one railroad has purchased this model.  The future of the Evolution Series unknown after the formation of Wabtec Freight. 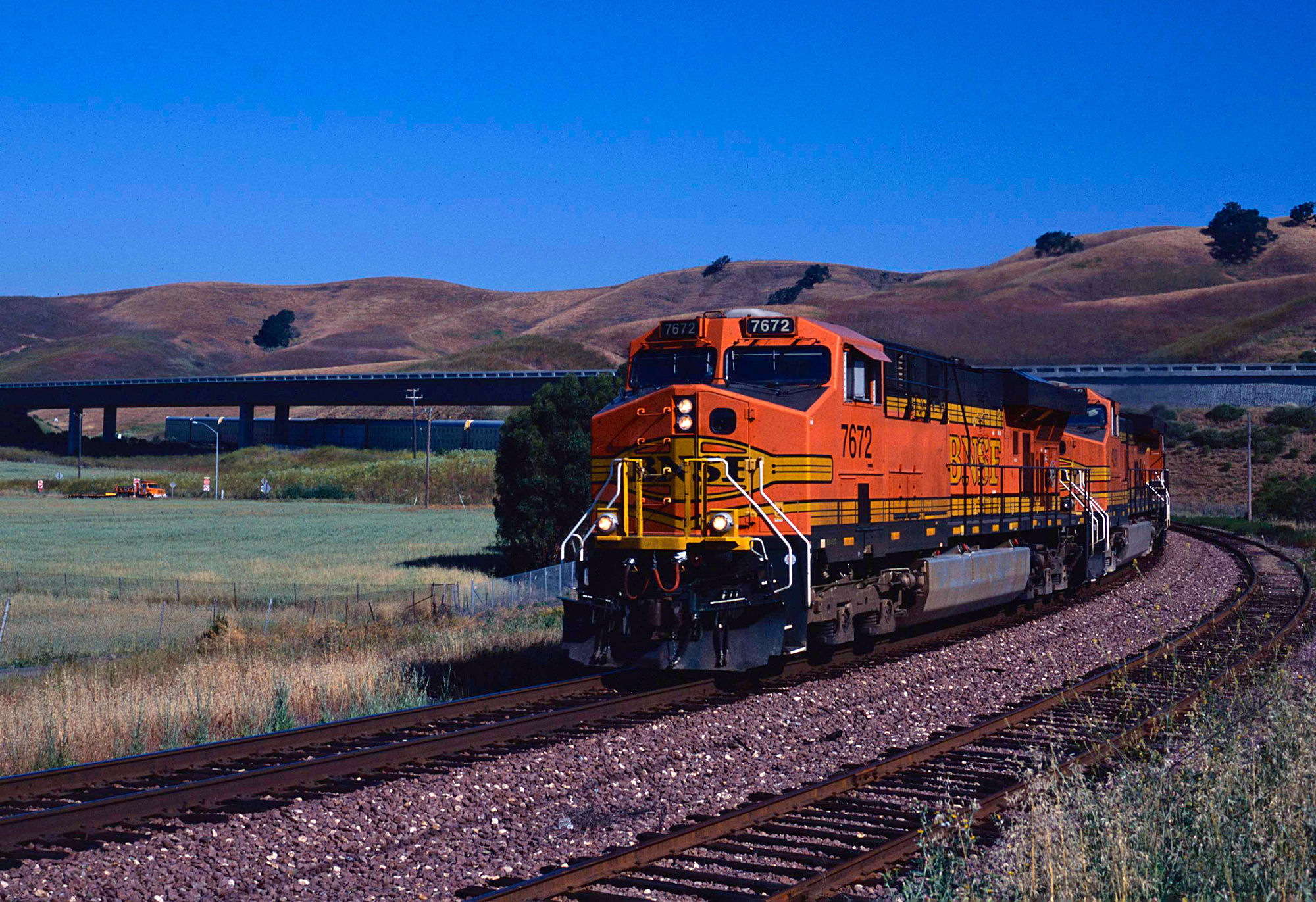 One of the first Evolution Series locomotives to roll out of Erie was BNSF Railway ES44DC #7672. The unit is seen here leading a string of autoracks near Christie, California on May 21, 2009. Craig Hamada photo. American-Rails.com collection.

The Evolution Series was designed to meet the EPA’s Tier 2 requirement of emissions standards and is powered by a GEVO 12-cylinder prime mover.

This new engine was the first complete redesign of a GE diesel since the Universal series of the 1960s and 1970s. Since that time the company's locomotives had a featured an FDL prime mover, upgraded over the years to include more horsepower and improve efficiency.

Normally, unless specially ordered, GE's locomotives came equipped with 16-cylinder engines. However, as a way to meet the EPA's requirements, the company was able to achieve the same horsepower rating of 4,000-4,400 utilizing only 12 cylinders, thus reducing the carbon footprint and increasing fuel efficiency.

The models General Electric introduced using this power plant were  quite similar to those it replaced.  The information below highlights the Evolution Series models. 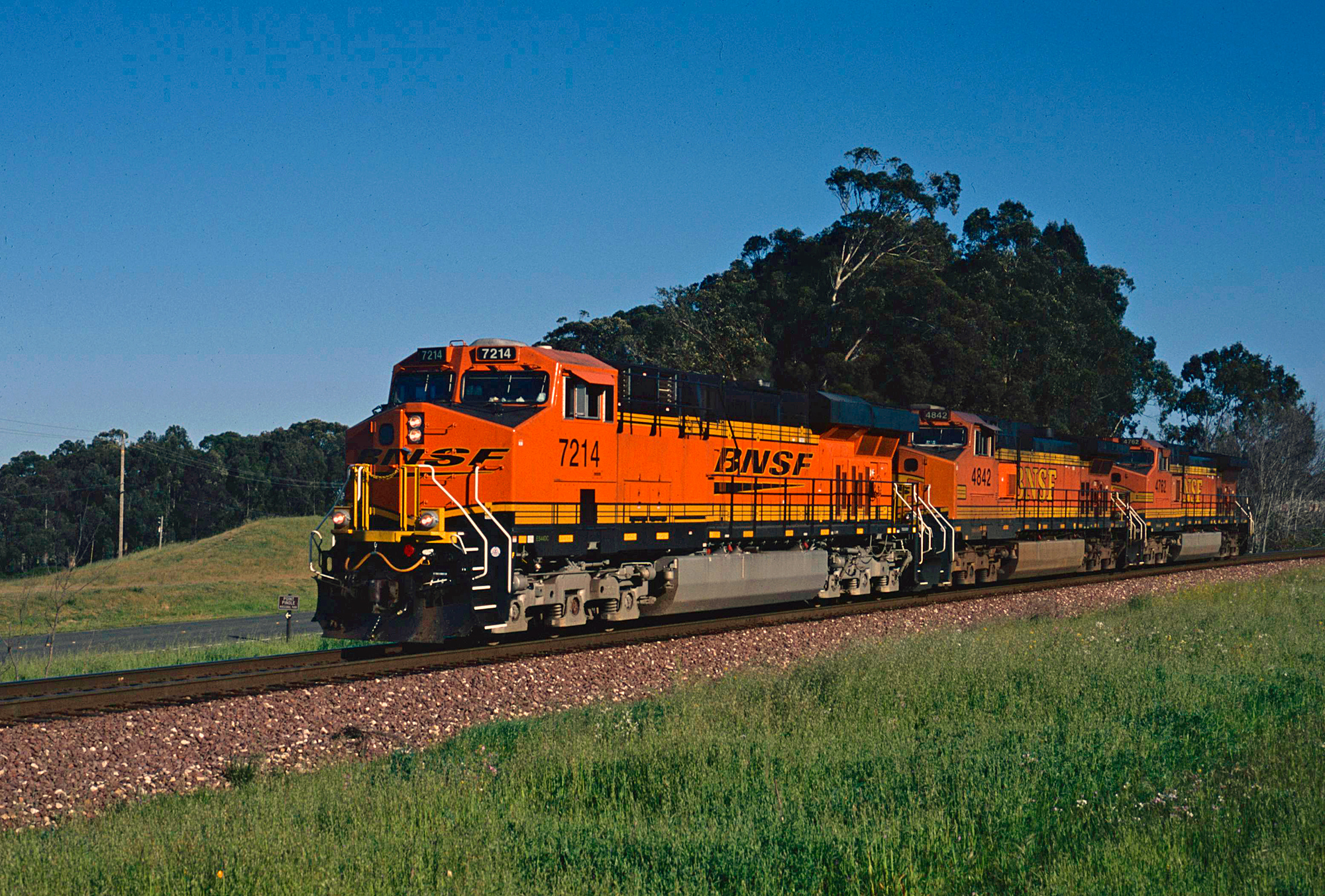 The C40-9W was a special request by NS wishing to have a locomotive that offered just slightly less horsepower than the standard design. NS began taking delivery of this design with a standard cab in 1995 known as the C40-9.

A year later it began acquiring the wide cab version and altogether wound up with more than 1,200 by the time GE ended production in 2004.  Today, Norfolk Southern owns 212 ES40DCs.

The C44-9W was a very popular locomotive cataloged between 1994 and 2004. It was purchased by several roads like the SP, Chicago & North Western and CN. However, BNSF found the model most suitable, purchasing more than 1,600 examples.

The ES44DC found service on BNSF (721), CSX (302), and Canadian National (90), totaling 1,113 examples. Once again, BNSF was the largest buyer. The locomotive is virtually identical to the above ES40DC save for its increased horsepower using the 4-cycle, 12-cylinder GEVO prime mover. 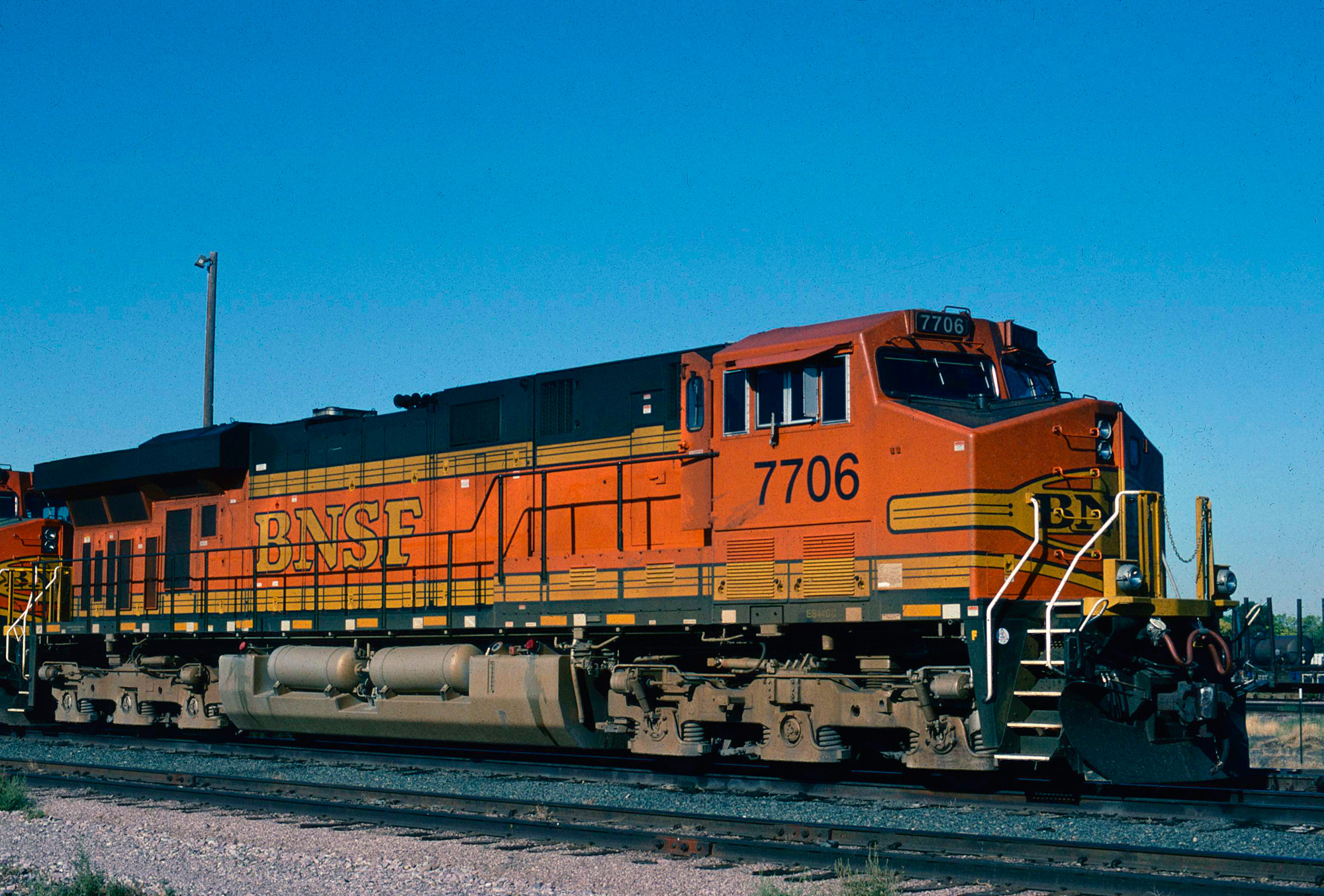 The success of the AC4400CW carried over to the ES44AC, which saw impressive sales as well. Internally, the locomotive was quite similar to its direct current counterparts using a 12-cylinder GEVO prime mover and model B13B2B traction motors.

However, it offered much more tractive effort; 183,000 pounds starting and 166,000 continuous. The standard ES44AC (which CSX labels ES44ACHs due to their high tractive effort) sold nearly has sold 3,835 examples. 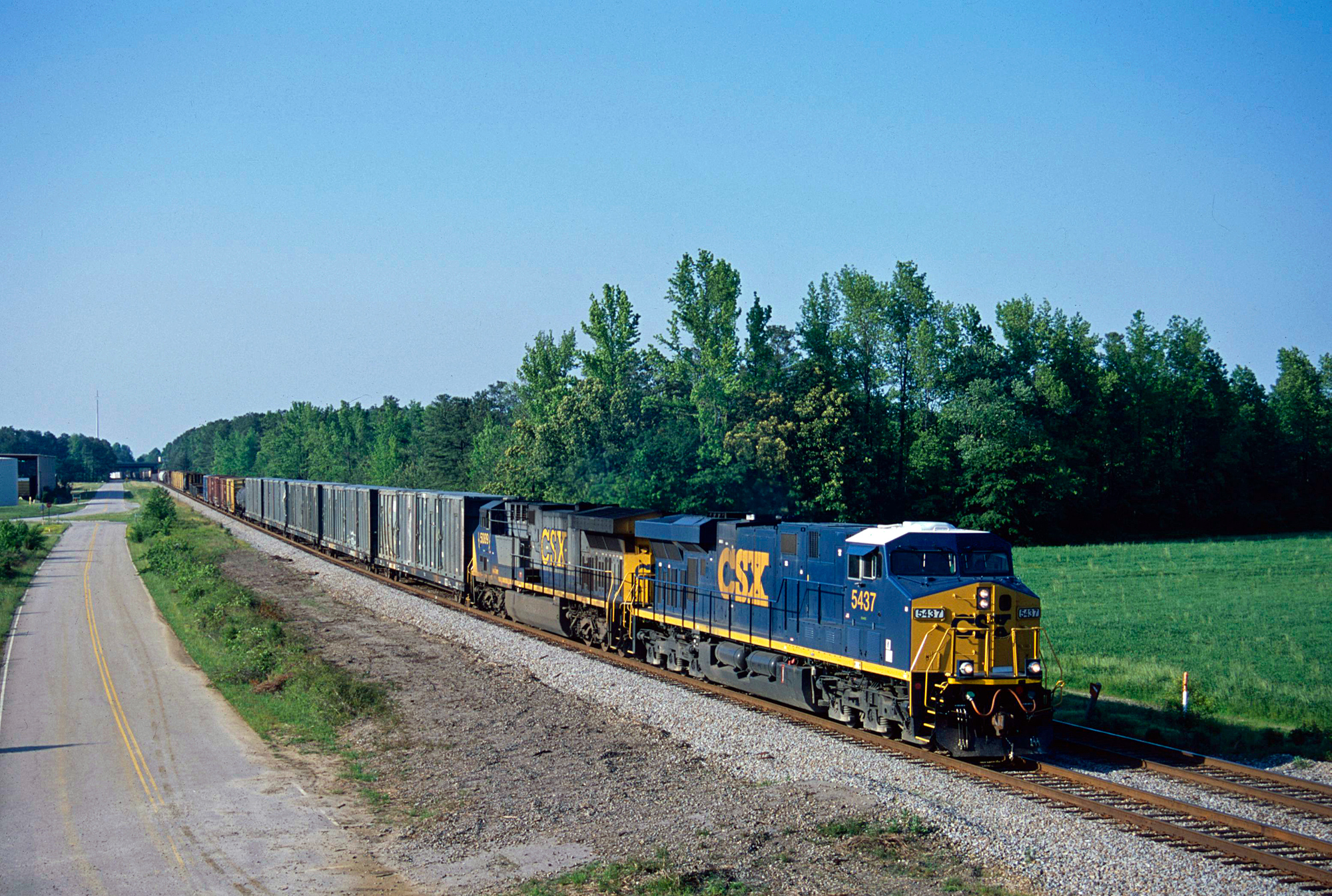 The ES44AC was sold to a multitude of railroads and private industries.  In addition, the model has enjoyed sales of its other variants such as the ES44DCi for Rio Tinto (Australia), ES40ACi for Egyptian National Railways and MPRI of Egypt, ES40ACdbi for Libyan Arab Railway, ES58ACi for the Carajas Railroad Brazil, and the ES59ACi for the Chinese National Railways. All models of the Evolution Series are C-C designs (six axles). 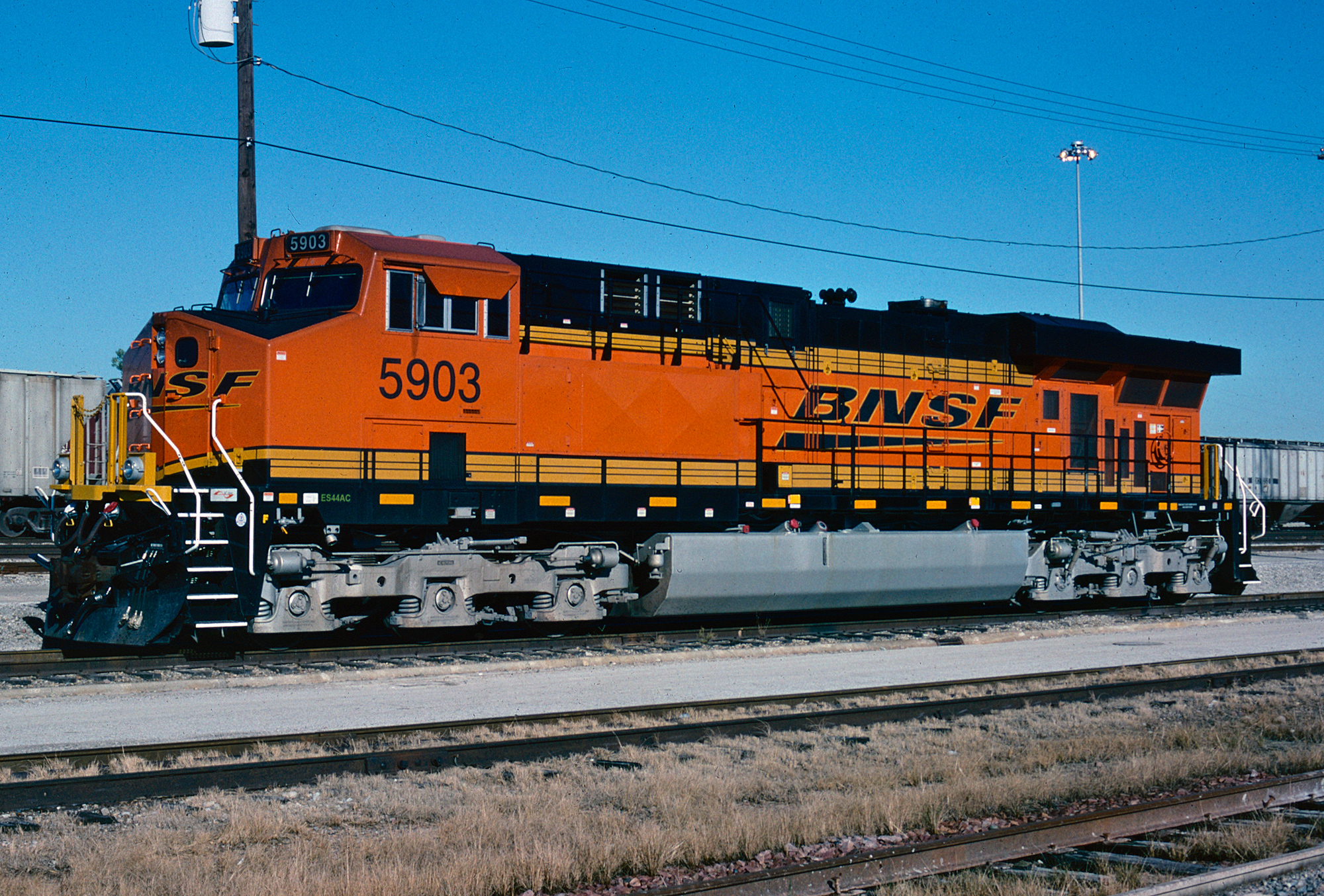 One of GE's last cataloged model was a variant, the ES44C4.  It was purchased by BNSF, totaling 1,119 units, and Florida East Coast Railway (24 units).

The design featured an A1A-A1A truck setup, meaning that the center axle is not powered. It is a type of locomotive that has not been offered for decades although locomotives like EMD's E series and the American Locomotive's PA model regularly used this setup. 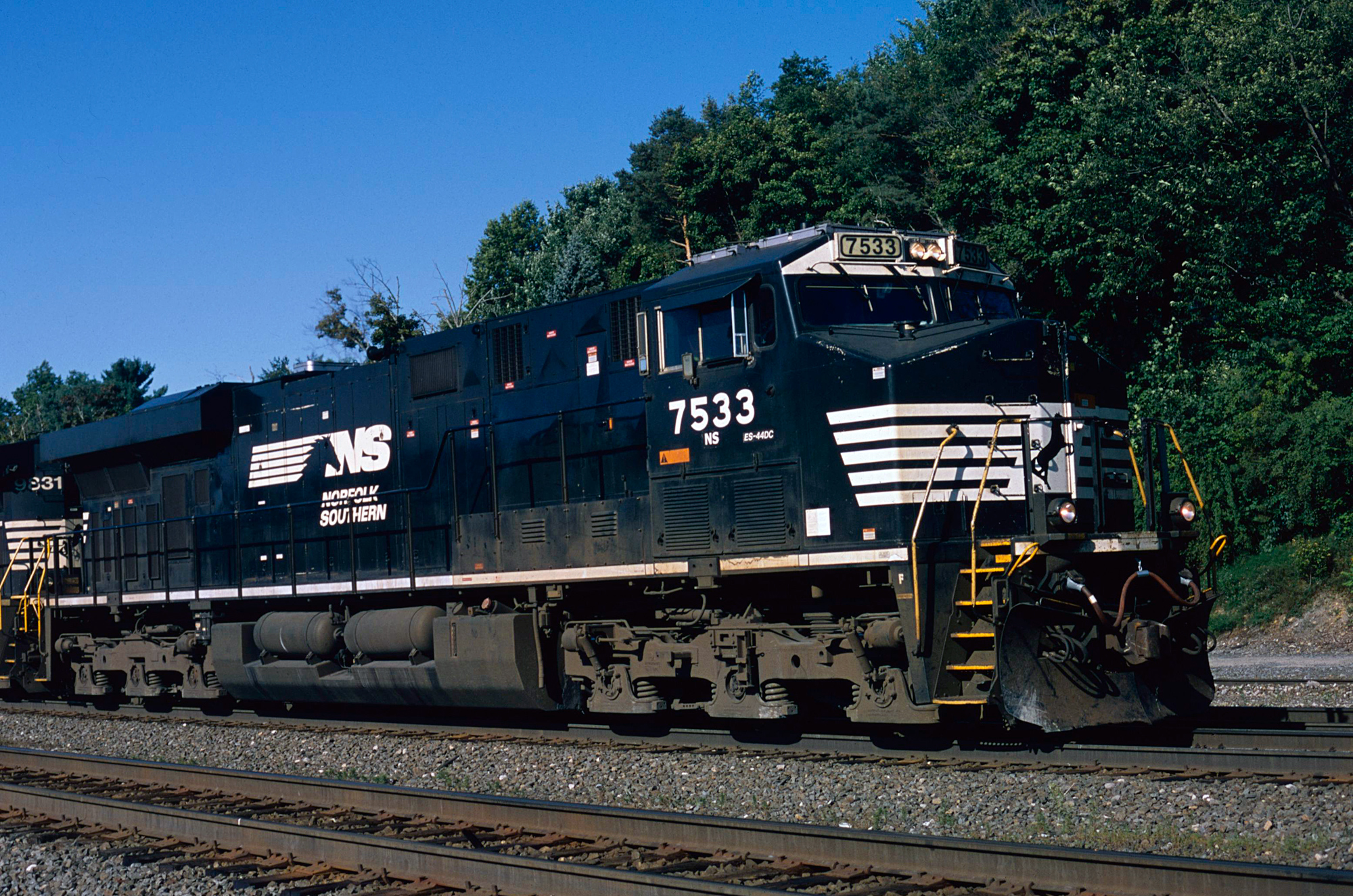 General Electric's very last cataloged model(s) was the so-called "ET" series, the ET44AC and ET44C4 (again, CSX lists their ET44AC as the ET44AH).

It began production in the summer of 2012 to meet Tier 4 complaint standards by the EPA.

The carbody features a length of 74 feet, 6 inches, which is 16 inches longer over all previous GE models.  These locomotives are easy to identify by a defined "blister" near and over the rear radiator which houses an advanced exhaust treatment system.

Interestingly, GE never offered this locomotive as a direct current variant. It has been purchased by BNSF, Canadian National, CSX, Norfolk Southern, and Union Pacific.  The first entered service in 2015.  To date, some 914 have been sold.