The F2 was built directly after production was completed on the FT model, soon after World War II had ended. The locomotive appeared similar, externally to the FT although the carbody did receive a slight upgrade (most notably the overall number of portholes).

Internally, the F2 was virtually identical to the FT although there were some changes primarily with how EMD designed the engine compartment (which became standard among all future F models).

The Rock and ACL were particularly big buyers, acquiring between a dozen and two dozen units before production switched to the later F3.

Unfortunately, the rarity of the locomotive's rarity, in addition to it being a transition model between the FT and F3, resulted in no examples being preserved. 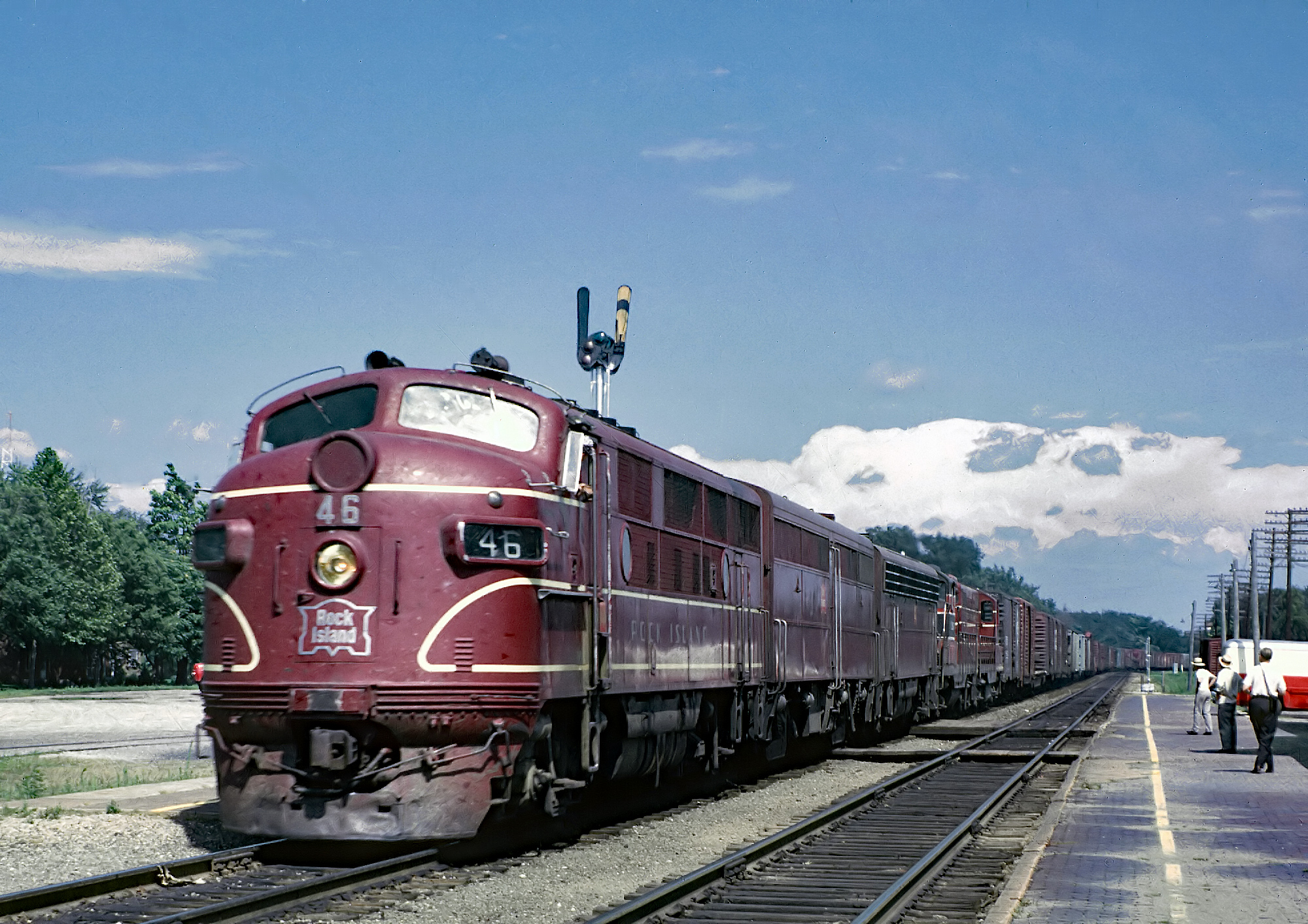 A rare Rock Island F2A (#46), an FB-1 (Alco), and a trio of other first-generation EMD products lead a long freight train westbound past the station at Ottawa, Illinois on a July afternoon in 1963. Roger Puta photo.

The EMD F2 was essentially an extension of the FT.  It still featured GM's 16-cylinder model 567B prime mover, which could produce 1,350 horsepower.

The design did offer an upgraded traction motor, the model D27 although its continuous tractive effort rating remained at 40,000 pounds (55,000 pounds starting).

The locomotive's gearing was also changed to allow for a higher top speed of 70 mph. Again, the most noticeable internal difference, for crews anyway, was how EMD designed the layout of its engine compartment.

Overall, it is interesting that the company even elected to release an F2 model when it had already cataloged the F3 directly after the war in 1945, which was selling in the thousands.

Externally, the F2 continued to carry the classic "bulldog" nose and streamlined carbody (although it slightly changed the steel sheathing around the front truck).

However, Electro-Motive did make some minor, visual changes in this area such as the port holes' spacing with only three incorporated incorporated into the carbody instead of the closely spaced four on the FT.

The builder also employed four exhaust fan housings on the roof and made the fuel tank more streamlined with the rest of the carbody.

Aside from these differences the F2 varied little from the FT sporting the same frame and remained at around 50-feet in length.  Finally, its weight of 115 tons remained the same as the former model.

Since Electro-Motive's popular F3 was already in production (and was one of the most successful in the series with upwards of 2,000 built), few railroads purchased the F2.  When the company ended the line just (74 A units and 30 B units had been manufactured.

Keep in mind that because the Electro-Motive Division did not establish its General Motors Diesel division, located in London, Ontario until 1949 Canadian lines never had the opportunity to purchase early F models.

This changed, however, when the F7 was released, which gave Canadian National, Canadian Pacific, and others the opportunity to purchase Electro-Motive's cab models.

The first began rolling out of the London plant in 1951.  Many F2s remained in service for many years but today, as mentioned above, all were scrapped before any could be saved for posterity.