It currently includes both the Farmrail system (which stretches east/west between Weatherford and Erick, Oklahoma and north-south roughly between Custer City and Elmer) as well as the Grainbelt Railroad, which operates between a connection with the BNSF Railway at Enid, south to Frederick.

With trackage rights Farmrail reaches as far south as Quanah, Texas. While the short line predominantly hauls traffic based in agriculture it has connections with two Class Is (BNSF and Union Pacific) and three short lines which gives the railroad an added advantage.

The history of the short line dates back to the early 1980s when the state of Oklahoma purchased redundant trackage from Burlington Northern and the Atchison, Topeka & Santa Fe Railway (the Santa Fe) which was threatened to be abandoned. 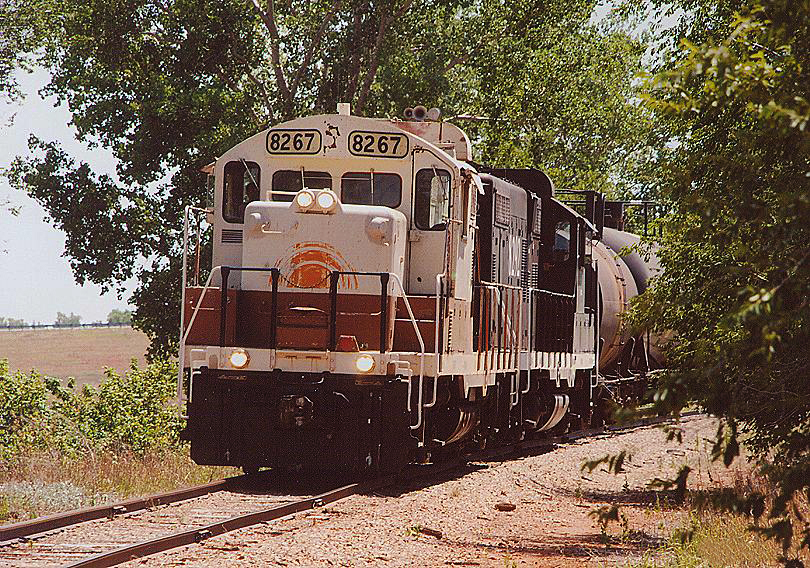 Interestingly, for a small railroad whose traffic has always been predominantly based in low-income agriculture, the Farmrail Corporation has remained a valuable and important short line for the region it serves for more than 30 years now.

It still operates all of the original lines the state purchased, beginning in 1981 (the history of which date back to BN predecessor St. Louis-San Francisco Railway, the then delinquent Chicago, Rock Island & Pacific, and of course the Santa Fe).

This original 1981 segment stretched 82 miles between Weatherford and Erick, and was originally part of the Rock Island system (it was actually the Rock's original main line between Tucumcari, New Mexico and Memphis, Tennessee).

The state of Oklahoma purchased this trackage from the Rock's liquidators to keep it from being abandoned. 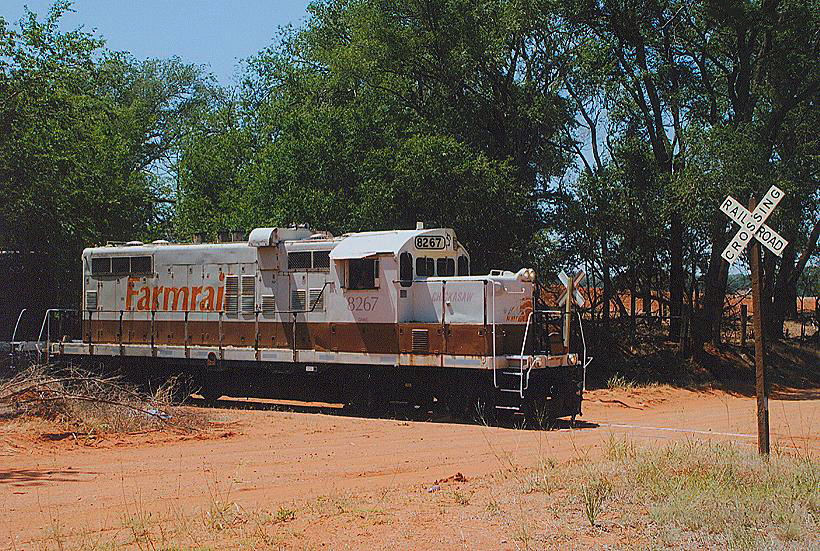 The same train seen above passing through a rural grade crossing near at Merritt, Oklahoma. Doug Kroll photo.

At this point Farmrail Corporation, an employee-owned holding company was created to operate this trackage and had interchange connections to both Burlington Northern and Santa Fe at Clinton, Oklahoma.

In 1987 the railroad further expanded when the state purchased from the Santa Fe its trackage between Westhorn, Clinton, and Elmer (part of the Class I's secondary route between southern Kansas and central Texas), a total of 89 miles.

This gave Farmrail a system covering 169 miles which it still operates today. 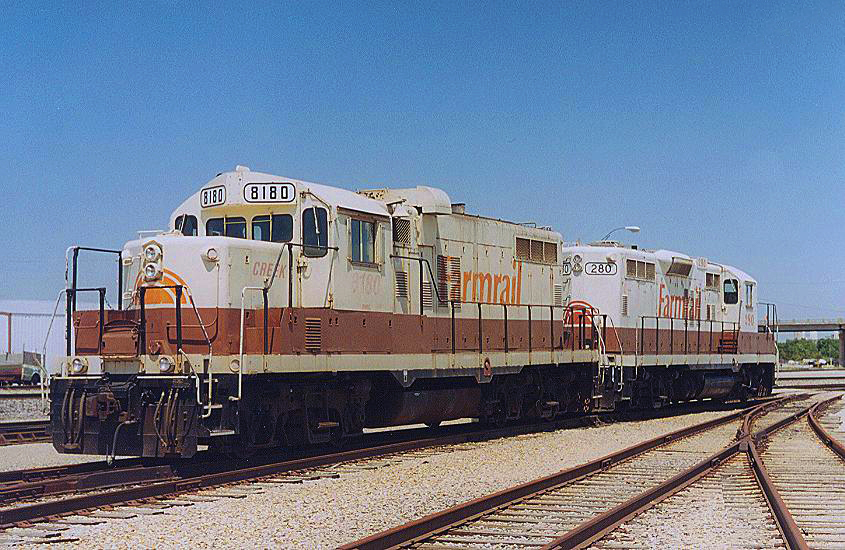 In 1992 the shortline again expanded when Oklahoma purchased from Burlington Northern its former St. Louis-San Francisco Railway (Frisco) line between Enid and Frederick, a distance of 176 miles (this trackage was along the Frisco's western edge of its system).

In doing so a separate railroad was created, the Grainbelt Corporation (a subsidiary of Farmrail) to operate the line.

Today, the railroad's have numerous interchange connections with:

Farmrail also has an additional connection to BNSF via trackage rights at Quanah, Texas. Including both shortlines the Farmrail Corporation operates some 349 miles of track with traffic based in wheat, gypsum, animal feed, aggregates, fertilizers, farm machinery, oilfield equipment, and petroleum. 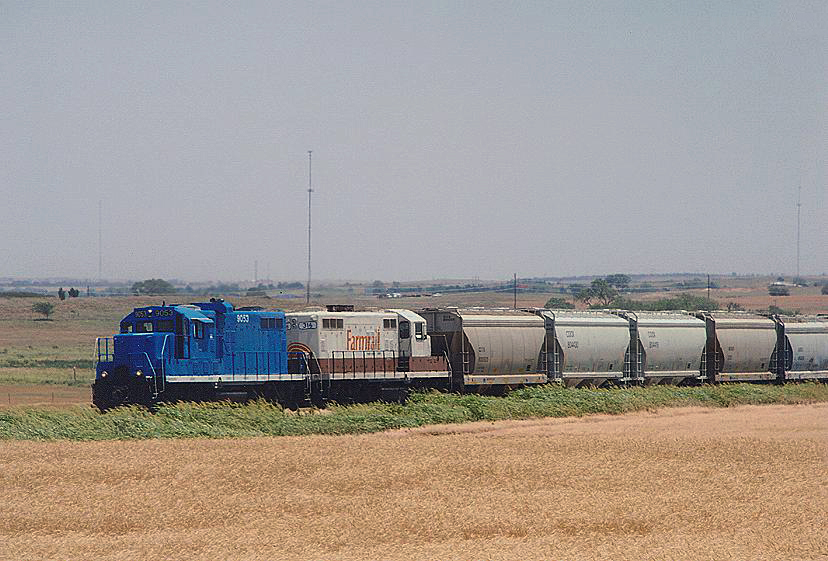 Farmrail GP9u #9053 (still in its ex-Georgetown Railroad paint) and GP9 #316 are westbound with their freight near Weatherford, Oklahoma on June 17, 2011. Doug Kroll photo.

Additionally, the railroad also attempts to help potential new customers locate suitable land along its lines and also provides Class Is, or other railroads, with car storage space if needed. 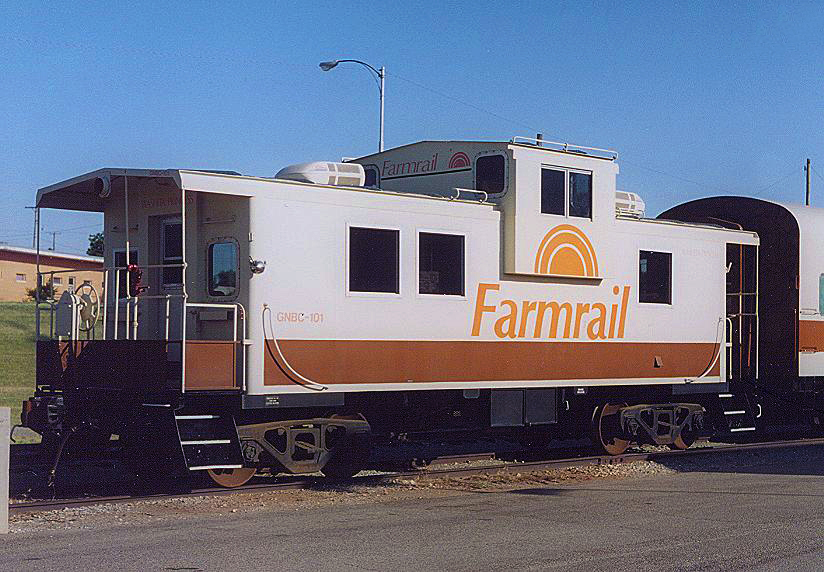 This lesser known excursion train operates some very nice equipment and is reasonably priced at less than $20 per person (they also offer available charters).

However, if you are interested in riding please be sure to book ahead as Farmrail only provides a handful of these excursions between July and November.

Listed above is current roster of Farmrail and Grainbelt (note that some of its units are named), almost all of which are early Geep models like GP7s and GP9s.