While many may not recognize the Frankfort & Cincinnati (reporting marks, FCIN) name the short line is fondly remembered in the state of Kentucky.

Within the industry the F&C was well-known for its primary source of freight, serving local distilleries. This earned the company the name The Whiskey Route (or sometimes The Bourbon Road, both names deriving from the Prohibition era) and it relied on this traffic for most of its years in service.

From an official standpoint, however, the F&C used The Kentucky Midland Route as its actual slogan. Beginning in the 1960s the F&C slowly began to curtail its system as freight dried up and by the 1970s only about a quarter of the original route was still in use.

Over the years very little maintenance had ever been performed on the property and after a bridge could not be repaired the railroad was forced to suspend operations altogether in the mid-1980s. 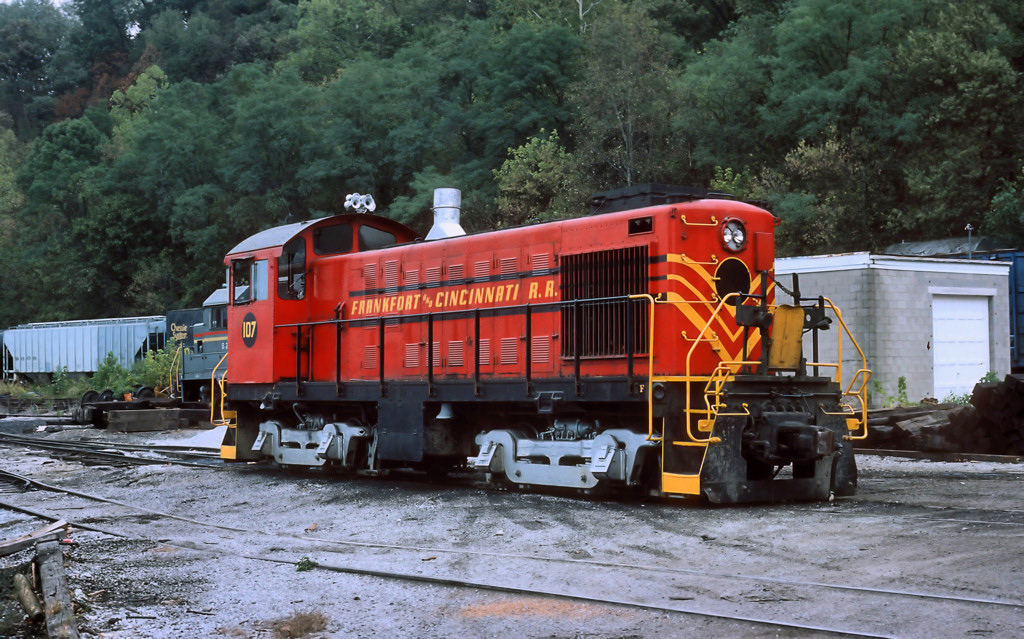 Frankfort & Cincinnati S4 #107 rests in the small yard in Frankfort, Kentucky during September of 1983. By this date the remaining route of the original F&C was operated by Pinsly and within a few years was abandoned altogether. Gary Morris photo.

If there was ever a road which defined the classic local, bucolic short line it was certainly the Frankfort and Cincinnati Railroad.

The history of the F&C can be traced to 1888 when the Kentucky Midland Railway was chartered by local businessmen to build east from Frankfort.

The company reached Georgetown in June, 1889 and by the following January of 1890 it was opened to Paris giving it a system of 40.8 miles.

In 1899 the company was sold in foreclosure and renamed as the Frankfort and Cincinnati Railway. While the new name did nothing to help stimulate an extension of the F&C system the railroad is credited with the growth of the Kentucky's capital city during the late 19th century.

Even by this date the short line was serving three distilleries (George T. Stagg in Frankfort, Old Grand-Dad in Elsinore, and Buffalo Springs in Stamping Ground) which comprised the bulk of its traffic.

The F&C also had the benefit of major connections with two Class I lines:

The road used these interchanges quite effectively, playing each off of the other to obtain the best freight rates.  The L&N was also once much more than just an interchange partner as it controlled the F&C until about 1920 when the road regained its independence.

In 1927 the property was again sold in foreclosure and this time renamed as the Frankfort and Cincinnati Railroad. 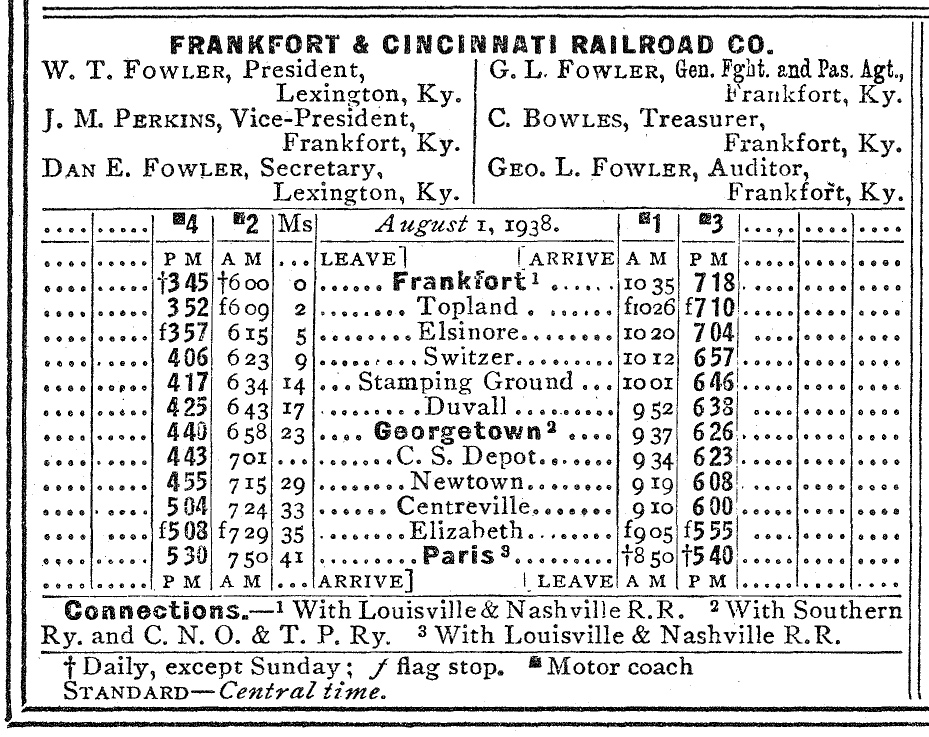 Except for its very early years before the coming of the automobile passenger operations on the F&C were typically a rather insignificant considering the railroad served no major city outside of Frankfort.

For its last two decades or so providing trains for the traveling public the railroad primarily relied on two gas-electric "Doodlebugs" which were dubbed The Cardinal when in service.

On December 31, 1952 the F&C exited the passenger business altogether although one of its Doodlebugs survived, now preserved at the Kentucky Railway Museum. What remained was a freight business that still leaned heavily on Kentucky's renowned Bourbon whiskey industry.

Not only did these businesses provide the railroad with carloads of outbound alcohol (which interestingly enough boasted their own Federal guards when set out overnight awaiting pickup by either the CNO&TP/Southern at Georgetown or the L&N at Frankfort/Paris) but also the products necessary to produce the "Bluegrass Firewater."

As such the F&C could be seen hauling hoppers of corn mash, boxcars of bottles, loads of packaging goods, and materials to produce barrels.

Additionally, the railroad hauled other freight such as aggregates, coal, lumber, agriculture, and even farm equipment on occasion.

As the CNO&TP/Southern began running more and more trailer-on-flatcar (TOFC), or piggyback, trains in the 1960s this was also picked up by the F&C and a few of its distilleries in Frankfort believing the service offered some real advantages.

In 1946 the Frankfort and Cincinnati Railroad ended its remaining steam operations when it purchased a single General Electric 70-ton switcher, #100.

In 1961 the F&C, which had been owned by the Fowler interests of Frankfort for decades, was sold to Samuel Pinsly's family of short lines.

Unfortunately, by this date deferred maintenance, light 70-pound rail, and aging bridges were catching up with the railroad.

The year 1968 witnessed its first abandonment as the 16-mile route from Georgetown to Paris was ripped out leaving just 24.8 miles in place. 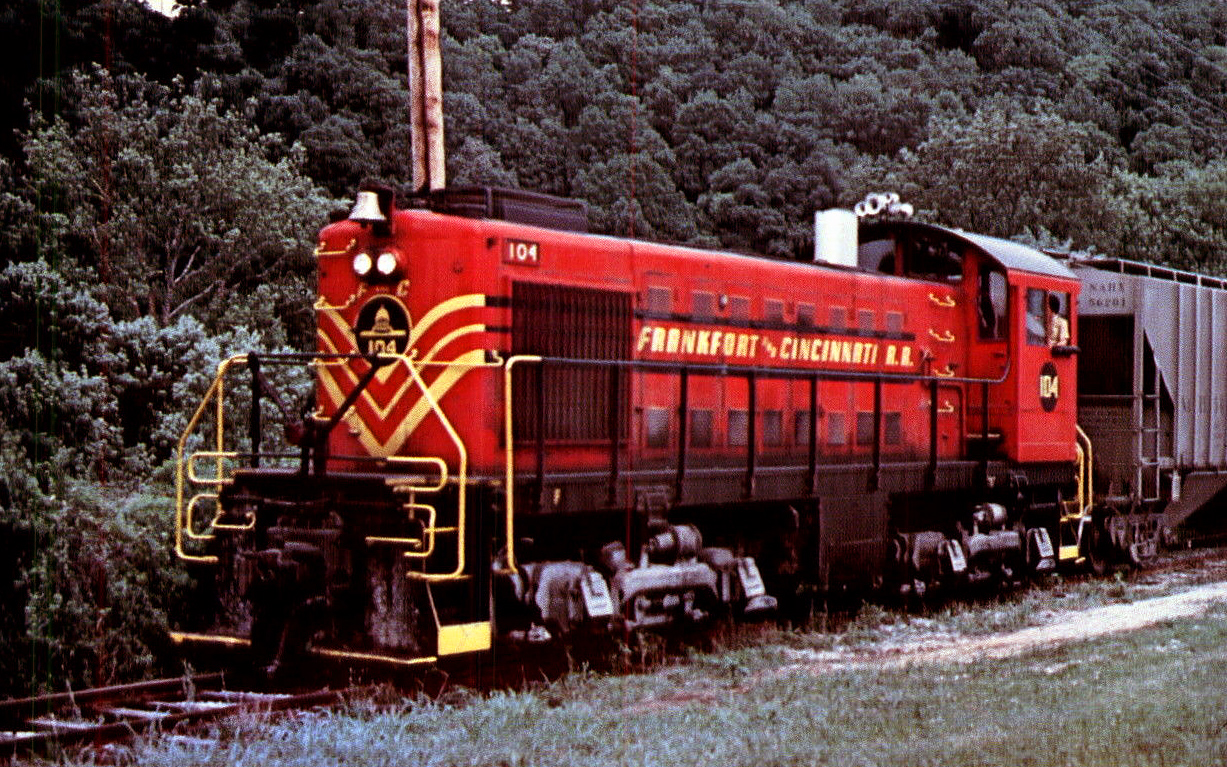 Frankfort & Cincinnati S2 #104 makes the slow, meandering run from the yard at Frankfort, Kentucky to a nearby distillery in Stagg in a scene likely dating to the 1970s.

In reality The Kentucky Midland Route had hoped to shutdown its remaining operations then but pressure from the distilleries kept it going.

By 1980 with just a few distilleries still left around Frankfort the F&C was truncated for a second time, primarily as a switching-only operation about 7 miles outside of Frankfort.

Then in 1985 a damaged trestle due to a derailment forced the railroad to shutdown entirely when it could not afford to fix the structure.

Two years later in 1987 the last rails were pulled up. The Frankfort and Cincinnati Railroad was a fascinating operation not only because of its down-home feel but also its laid-back nature, never seeming to be in a hurry as it meandered its way along the Kentucky countryside.

Today, while nature is reclaiming the right-of-way and development has destroyed other sections bits and pieces can still be seen here and there.

(Thanks to Ed Vasser for help with the information on this page.)