The history of the Fonda, Johnstown & Gloversville Railroad (reporting marks, FJG) is an interesting one.

The company began as a means of serving its namesake towns located in eastern New York. However, it wound up controlling several local interurbans which pushed the road eastward as far as Schenectady.

Through World War I it was a quite profitable with its passenger services (particularly through a number of very popular local resorts), which used both standard steam locomotives as well as electric trolleys, although the company truly thrived on a freight business which relied heavily on local tanneries.

Before World War II, the FJ&G gave up its increasingly unprofitable interurban operations even though it had attempted beforehand to save it by purchasing the most expensive equipment ever built.

Until the 1970s the railroad did relatively well before the loss of the tannery businesses forced it to close. For about 10 years the property was operated by the Delaware Otsego Corporation until it, too gave up on the line in the mid-1980s. 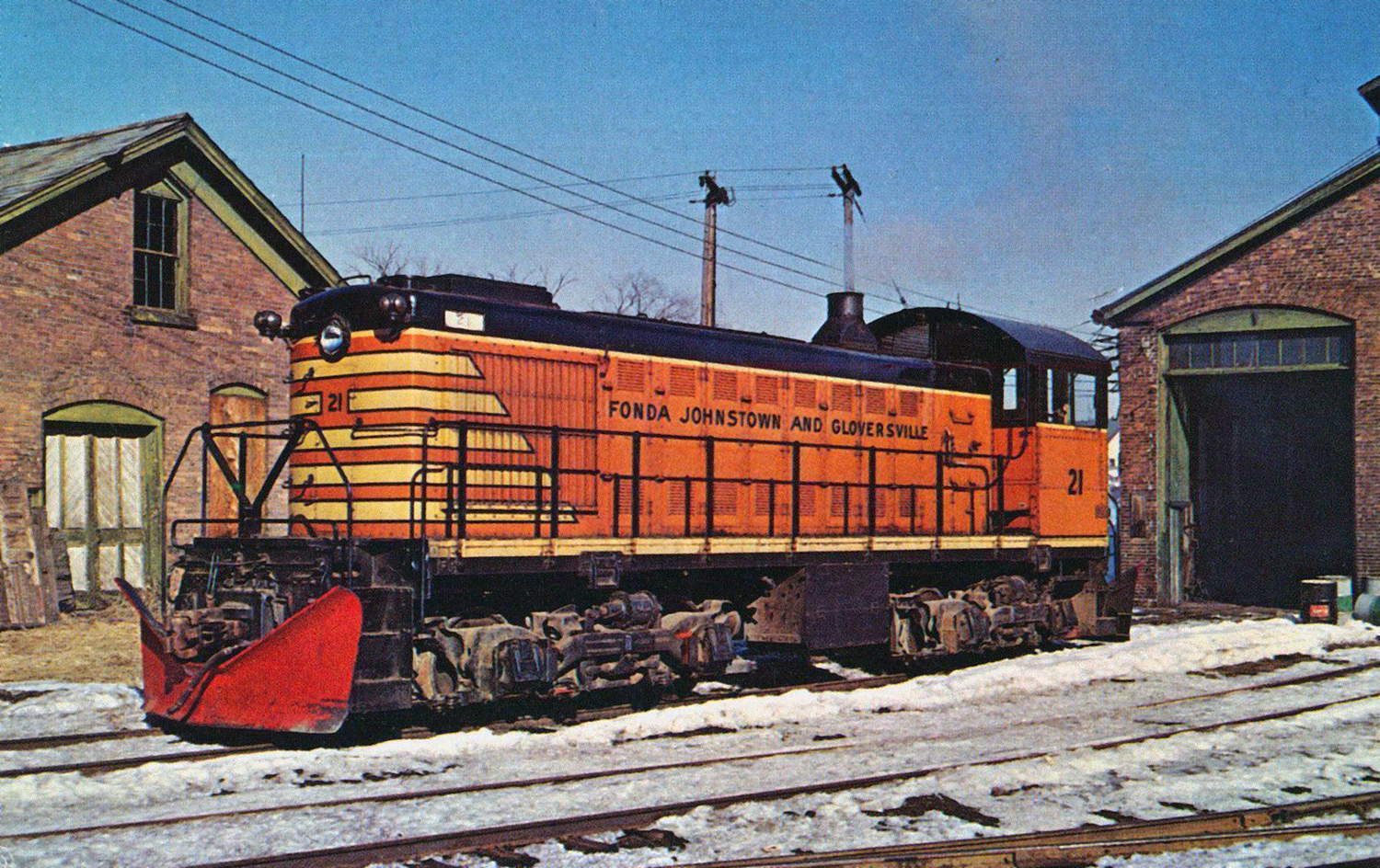 In the mid-19th century virtually every town and city of any size was hoping to be served by the rapidly growing, and sprawling, railroad industry.

One of these communities was Johnstown, which thought for sure it was soon to gain rail access when Fonda to the south along the Mohawk River was reached by the Mohawk & Hudson Railroad on August 1, 1836.

Unfortunately, residents had to wait for more than 30 years until trains finally reached their community. On January 17, 1867 local businessmen organized the Fonda, Johnstown and Gloversville Railroad with intentions of establishing service to all three towns.

With strong financial backing the new 10-mile route was opened in just three years with the FJ&G officially beginning operations on November 28, 1870. Additionally, it was not long before plans were in place to push northward to Northville.

Beginning in October of 1872 the Gloversville & Northville Railroad began construction of a 17-mile extension to link its namesake towns, which was completed by the summer of 1876.

Five years later in 1881 the FJ&G acquired full ownership of the property. While the route to Northville did offer the railroad some freight traffic its development as a resort and amusement park after the FJ&G takeover saw passengers flocking to the area.

During an era when there was no electricity, vehicles, or electronic devices of any kind for entertainment these resorts were quite popular (some railroads and interurbans specifically built them just for the increased ridership).

At Northville folks could play golf, baseball, enjoy picnic outings, swim, boat, enjoy other water sports, and even ride a miniature train on the grounds. There were also three hotels available on the grounds along with rental cottages and restaurants.

The Northville area became so sought after as a vacation destination that residents from New York City, Albany, and Syracuse rode the FJ&G to reach the resort.

Early, on, however the steam railroad began to receive competition from small interurban/trolley lines.

Some of the earliest dated to the 1870s although it was the Johnstown, Gloversville & Kingsboro Horse Railroad and the Cayadutta Electric Railroad that are most notable since they served essentially the same towns as the FJ&G except for Northville.

The horse-drawn, JG&KH trolley road opened in March of 1889 and was soon acquired by the Cayadutta Electric in 1895.

This up-and-coming interurban had purchased the Belt Line Railroad in 1892, (an exclusive streetcar line operating in Gloversville), and soon-after electrified the JG&KH.

By 1893, when the Cayadutta Electric officially opened, it was now not only a direct competitor to the FJ&G but also boasted a shorter route between Fonda, Johnstown, and Gloversville (albeit via steeper grades). 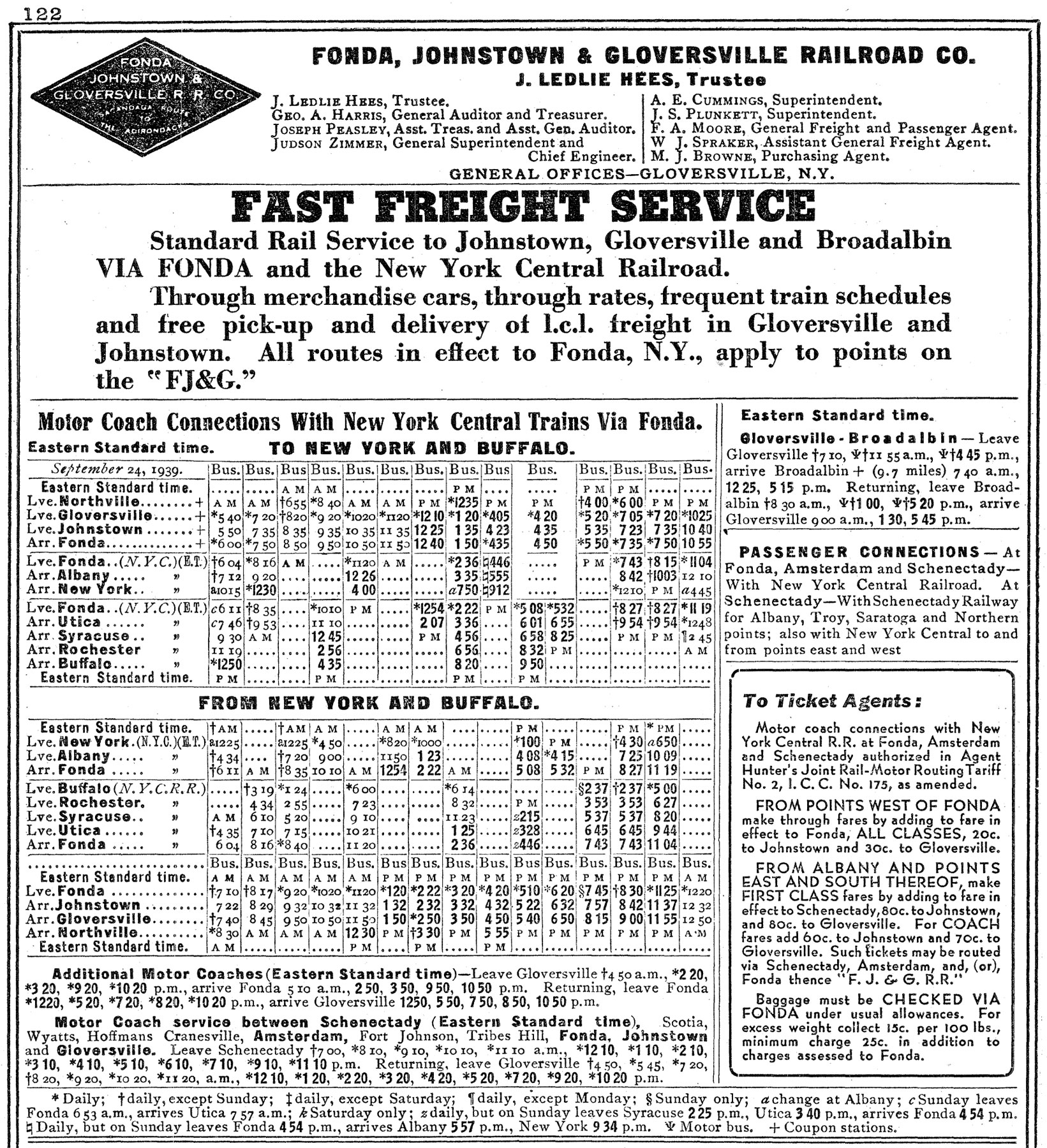 A condensed, 1940 timetable of the Fonda, Johnstown & Gloversville. Author's collection.

In 1902 a merger of the Cayadutta Electric, FJ&G, and Amsterdam Street Railroad took place using the Fonda, Johnstown and Gloversville Railroad name.

The latter road tied in to the Cayadutta Electric at Sulphur Springs Junction (near Johnstown) and continued southeastward along the Mohawk River to Schenectady roughly paralleling the New York Central & Hudson River (NYC) main line.

The final growth of the FJ&G occurred a year later when it took over the bankrupt Mountain Lake Electric Railroad, which connected Gloversville with a nearby resort at Mountain Lake.

While all of the interurban lines added substantial mileage to the FJ&G system they were not particularly profitable, as was so often the case with such operations (the FJ&G did, however, use its electrified lines for freight service, operating General Electric-built 35-ton steeple-cabs). 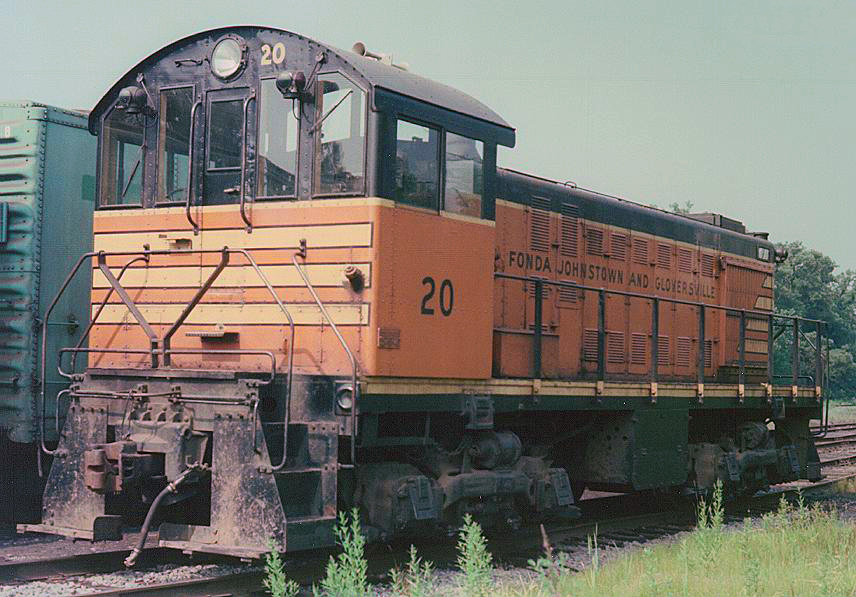 Still, the interurbans provided the FJ&G with a through route from the large industrial city of Schenectady to the resorts north of Gloversville, which continued to bring in decent revenues through the early 1920s when automobiles finally began to make their presence known.

The cutbacks of the FJ&G started early, when it abandoned its former Mountain Lake Electric Railroad in 1916 due to lack of ridership.

In 1928 the state of New York began damming the Sacandaga River to help control flooding along  the Hudson River valley.

This resulted in the Sacandaga Reservoir forming south of Northville that inundated the FJ&G right-of-way and the road elected to abandon the branch instead of rebuilding it due to declining ridership.

The company made an effort to save remaining interurban operations between Gloversville and Schenectady in 1931 by purchasing five high-speed, lightweight interurban cars from the J.G. Brill Company, which could operate up to 65 mph.

The cars, numbered 125-129, were very well built albeit extremely expensive at $25,000 each. However, they helped sustain ridership if only for a brief time.

On April 5, 1938 the New York Public Service Commission condemned the FJ&G's bridge over the Mohawk River into Schenectady and since the cars could not be operated bi-directionally they had no way of being turned.

As a result, the railroad elected to sell the cars to Utah's Bamberger Railroad (another interurban) and abandoned their route to Schenectady on June 24th that same year.

Soon after the road followed through with this by ending all interurban operations, including both streetcar lines and the former Cayadutta Electric parallel route between Fonda and Gloversville.

What remained was the original FJ&G with the company continued to employ a gas-electric "Doodlebug", #340, for passenger services until July 12, 1956 when the final mixed train ran from Gloversville to Broadalbin. 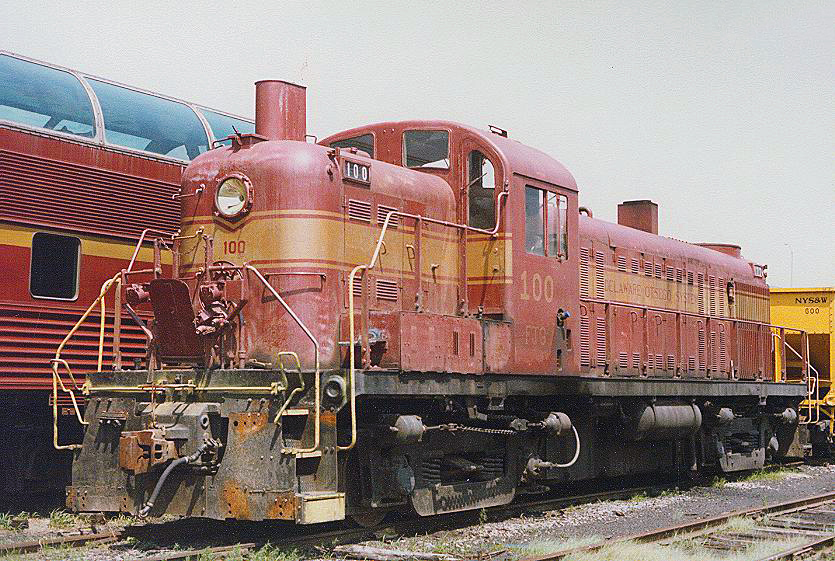 Delaware-Oswego RS2 #100 is seen here in Binghamton, New York on July 14, 1984 laying over between assignments. For ten years, beginning in 1974 until the end of operations, the unit operated on the FJ&G. Doug Kroll photo.

The FJ&G's freight traffic at this time still relied heavily on its tanneries, which produced primarily gloves but also other leather products (hence how Gloversville got its name).

In September of 1945 the company transitioned from steam to diesel power when it purchased a brand new Alco S2 switcher, #20 and picked up another a year later, #21.

It would later acquire an RS2, RS3, and a GE 44-tonner all of which sported a orange and black livery with yellow trim.

For the next 30 years freight ho-hummed along between Fonda and Broadalbin (a distance of 19.7 miles) until the local tannery business played out, forcing the FJ&G into bankruptcy and suspending operations in January, 1974 after 107 years of service.

(Thanks to "Case Of The Ambidextrous Short Line" by author Jim Shaughnessy from the March, 1959 issue of Trains as a primary reference for this article.)