The Big Four Railroad was short for the Cleveland, Cincinnati, Chicago & St. Louis Railway, a major component of New York Central's operations throughout the Midwest.

The genesis of this system begins in Ohio with the earliest chartered railroad dating back to the 1830s.  Like most of the well-known names of the 19th century, such as the Michigan Central, Lake Shore & Michigan Southern (LS&MS), Panhandle Route, Plant System, and Texas & Pacific, the Big Four was the creation of multiple smaller lines.

It, along with the LS&MS and Michigan Central, comprised the bulk of New York Central's modern network in Michigan, Ohio, Indiana, and Illinois.  The Big Four, alone, totaled roughly 2,400 miles and was largest of all three systems.

In the course of mergers and acquisitions there were two "Big Four Routes."  The first predated New York Central control and was known as the Cincinnati, Indianapolis, St. Louis & Chicago Railroad.

The more well-known was the later Cleveland, Cincinnati, Chicago & St. Louis Railroad formed in 1889.  Today, key through routes of the old Big Four carry on under Norfolk Southern and CSX Transportation. 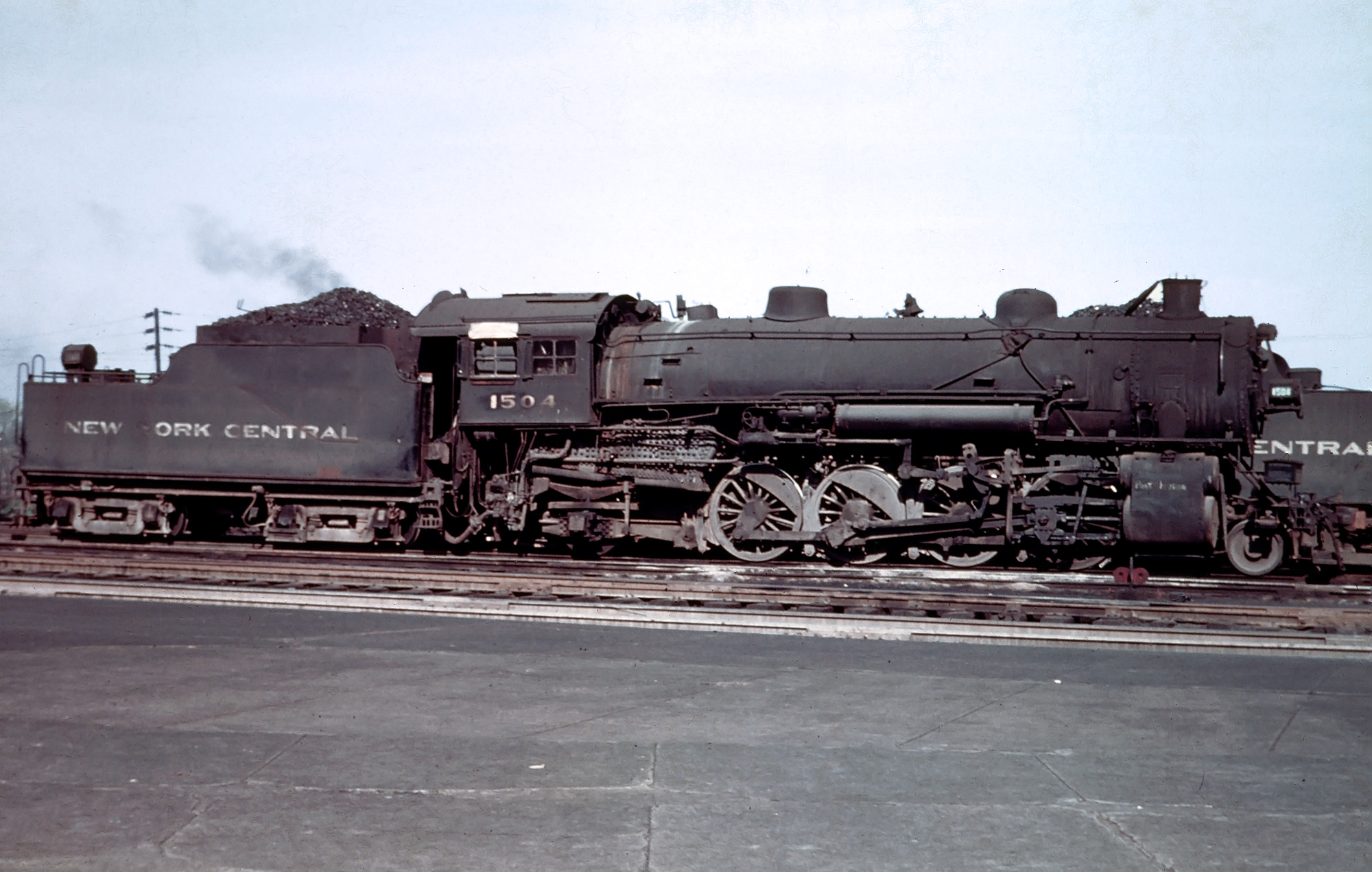 New York Central 2-8-2 #1504 (sublettered for the "Big Four") is seen here in East Alton, Illinois, circa 1950. The NYC owned some 1,342 examples across its system, many of which were sublettered for subsidiaries. These were the true workhorses on the NYC and handled general freight assignments. This particular example, originally a 2-8-0 (Class G-5), was built as #6004 in 1913 by Alco, listed as a Class H-5I. This unit was scrapped in 1953. Fred Byerly photo. American-Rails.com collection.

The history of the Big Four Route comprised two components, the so-called Bee Line and the original "Big Four Route."

The Bee Line began in the 1830s with the Cleveland, Columbus & Cincinnati Railroad's (CC&C) chartering on March 14, 1836.  At that time, Ohio was still considered the western frontier.

Nevertheless, by the 1830s numerous efforts were either already underway or in the planning stages to construct new railroads throughout Ohio.  The state's first, the Mad River & Lake Erie, was chartered in 1835 and opened from Sandusky to Republic in 1839 (30 miles).  Interestingly, this system would later join the Big Four.

The CC&C, like many railroads chartered at the time, struggled to secure financing.  It would be twelve years before construction finally broke ground in 1847.  The system, as its name suggests, was intended to link all three cities in its charter.

Work was slow, and at one point there was a possibility the road's charter would be voided due to lack of construction, but the railroad finally opened from Columbus to Cleveland by 1851.

The following year the CC&C offered through service to Cincinnati with an interchange partnership through the Columbus & Xenia and Little Miami Railroad.

Both were also under common ownership with the intent of opening through service from Galion, Ohio to Indianapolis, Indiana.  The B&I was tasked with building the Ohio segment while the I&B intended to build the Indiana section. 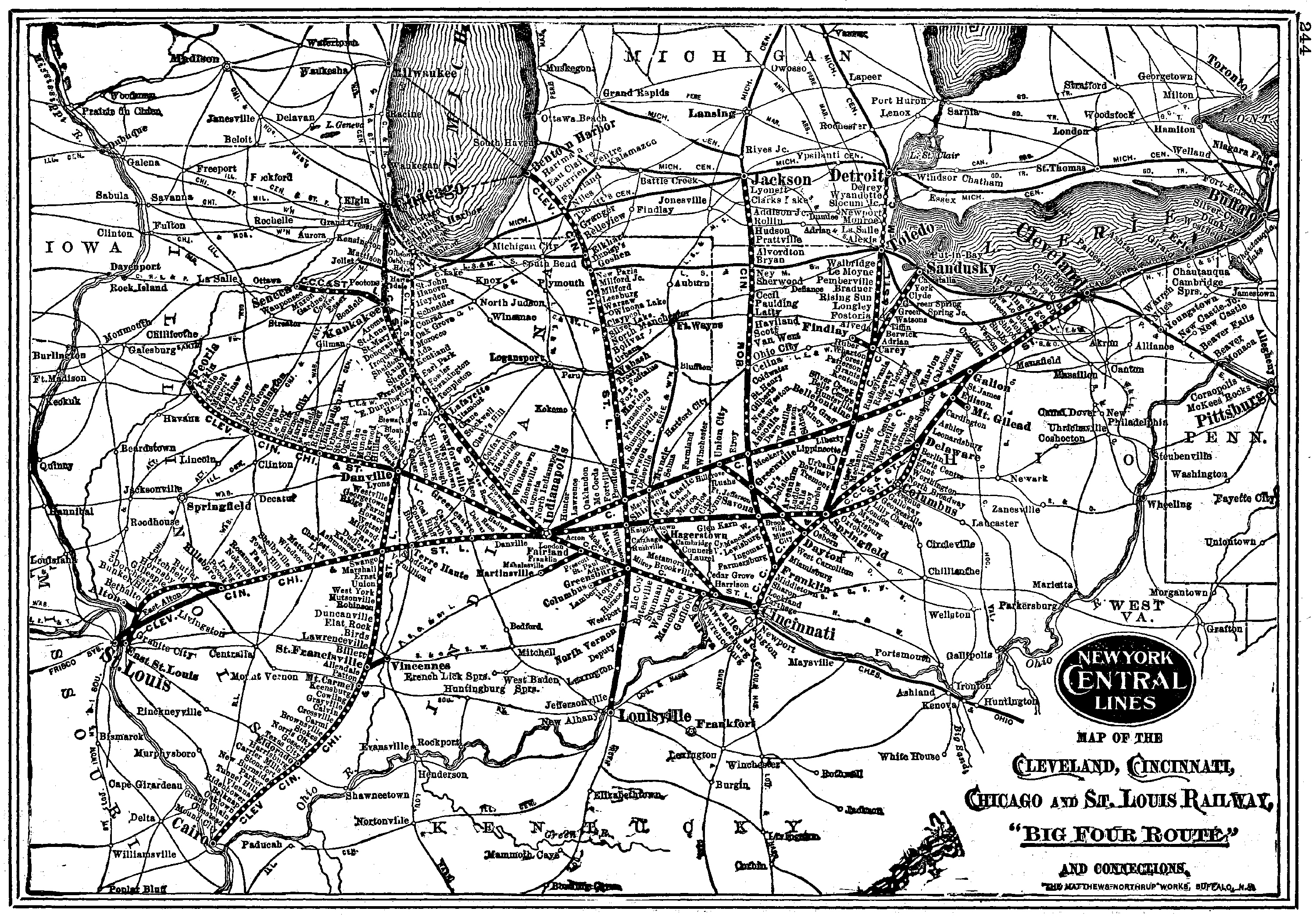 An 1910 route map of the Big Four Railroad. American-Rails.com collection.

The two sections were completed by 1853 and then merged in 1863 to form the Bellefontaine Railway.  The Official Guide Of The Railways from June, 1868 notes the railroad offered six different trains from Cleveland to Indianapolis and was referred to as the "Bellefontaine Line."

This was often shortened by the railroad as simply the "B Line" or "Bee Line." The Bellefontaine was later acquired by the CC&C in 1868.

The heritage of these roads and their subsequent struggles could fill a separate book.  In brief, the Cincinnati & Indiana was the first of the three formed, incorporated on February 7, 1853.

After several years of delays, the road was completed from Cincinnati to the Indiana state line.  It also operated a short branch from the city to nearby Harrison, Ohio (also near the state line).

On May 1, 1866 the C&I was leased by the Indianapolis & Cincinnati Railroad (I&C), predecessor to the later Indianapolis, Cincinnati & Lafayette (IC&F).  The I&C enjoyed its own interesting heritage that could be traced back to three predecessors which later merged on October 4, 1853.

By the time the I&C had leased the C&I, the former had completed its own line from Indianapolis to the Indiana state line and a connection with the latter, providing a through route from Cincinnati to Indianapolis.

Following the I&C's renaming as the Indianapolis, Cincinnati & Lafayette the latter road ran into financial difficulty.  It was subsequently acquired by the Cincinnati, Indianapolis, St. Louis & Chicago Railway on May 6, 1880 (the CIStL&C had been incorporated just a few months prior on February 21, 1880). 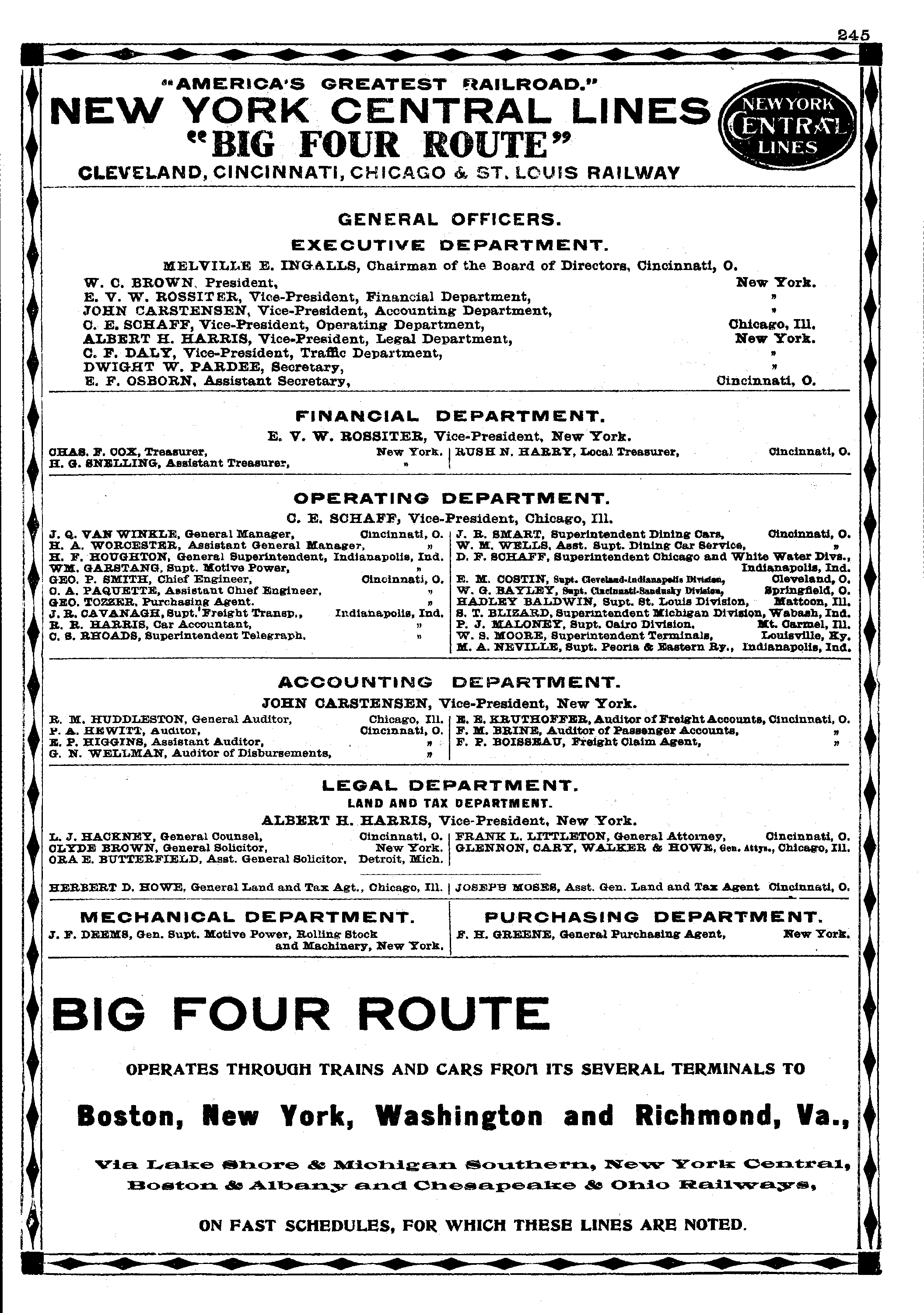 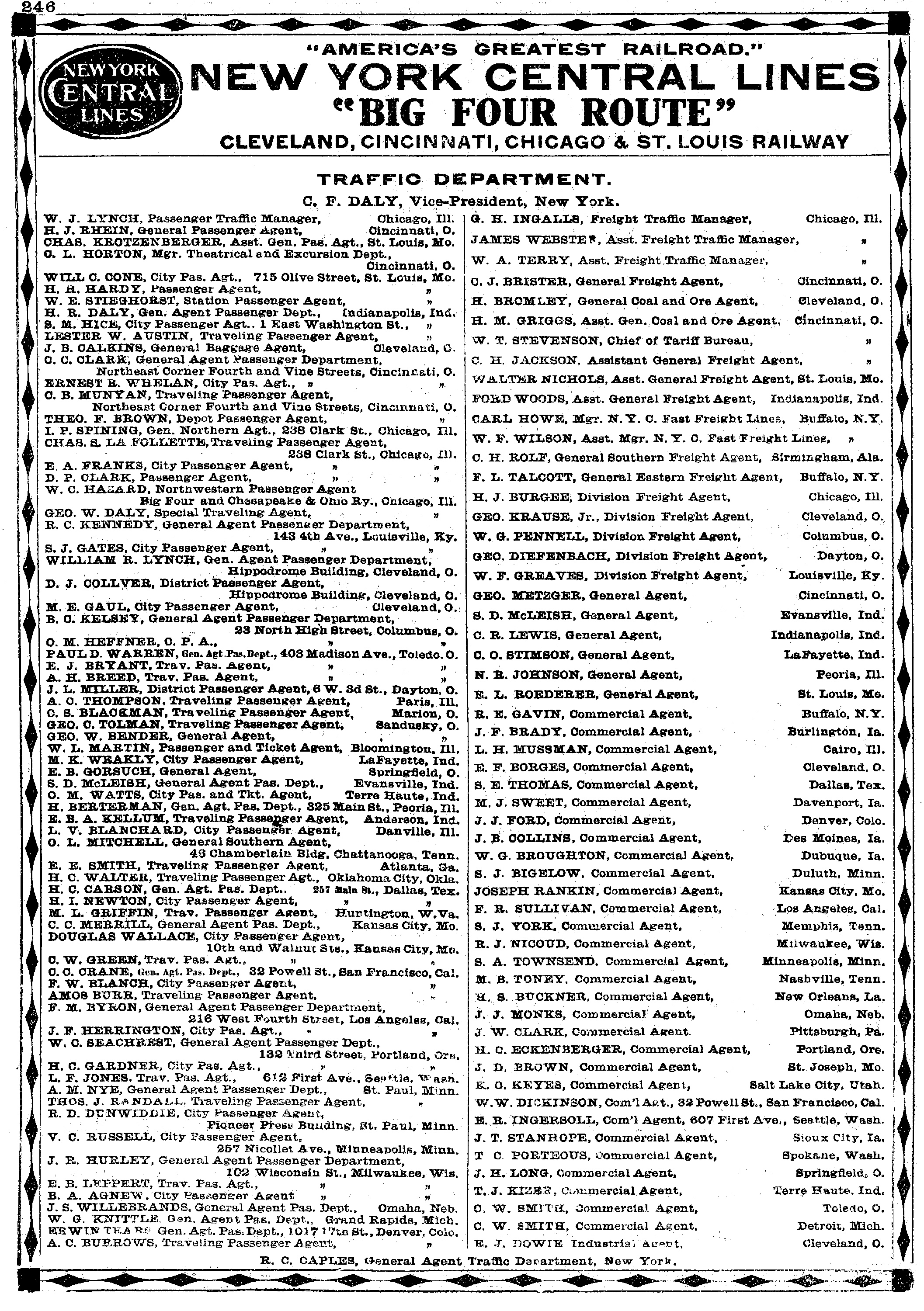 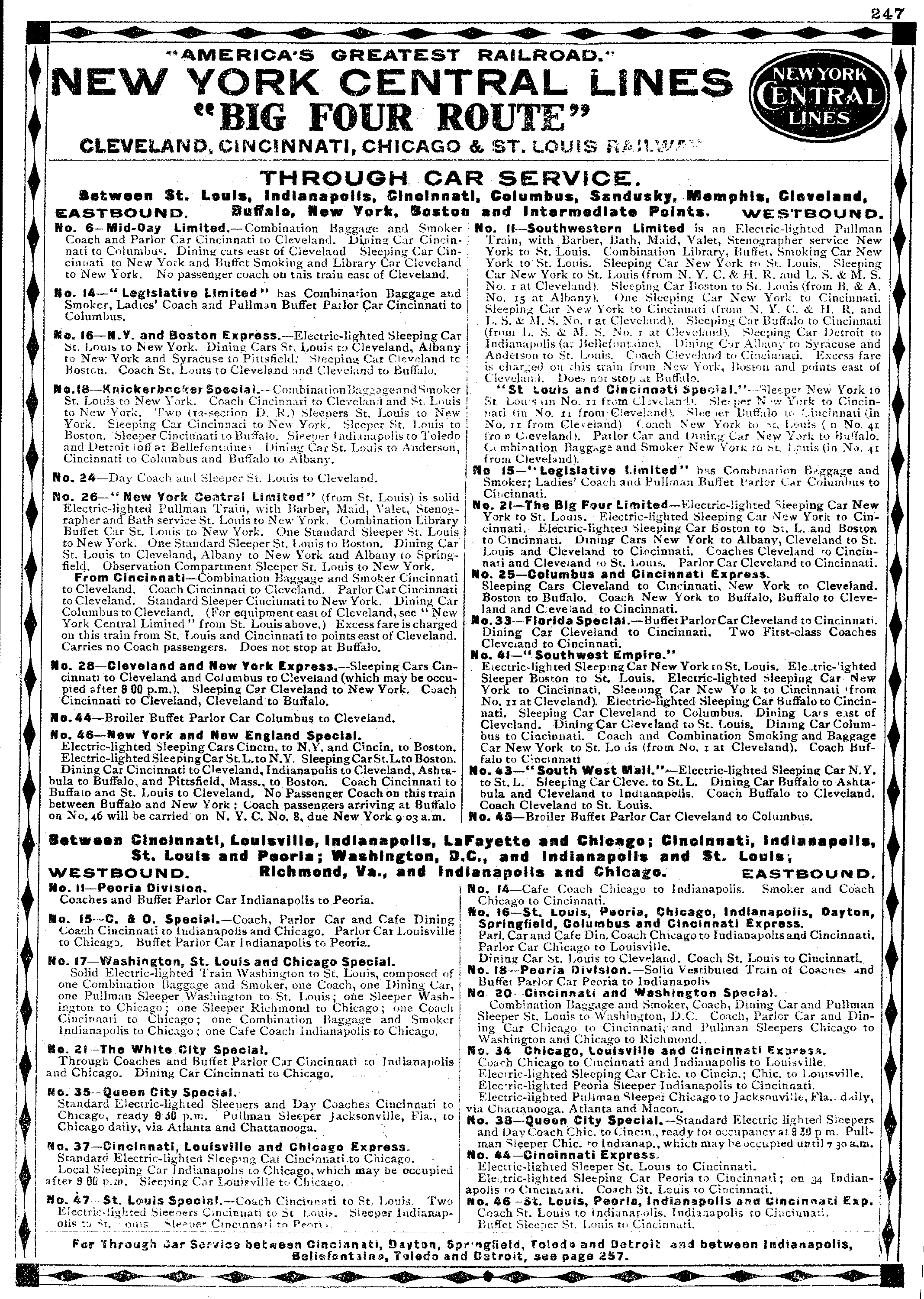 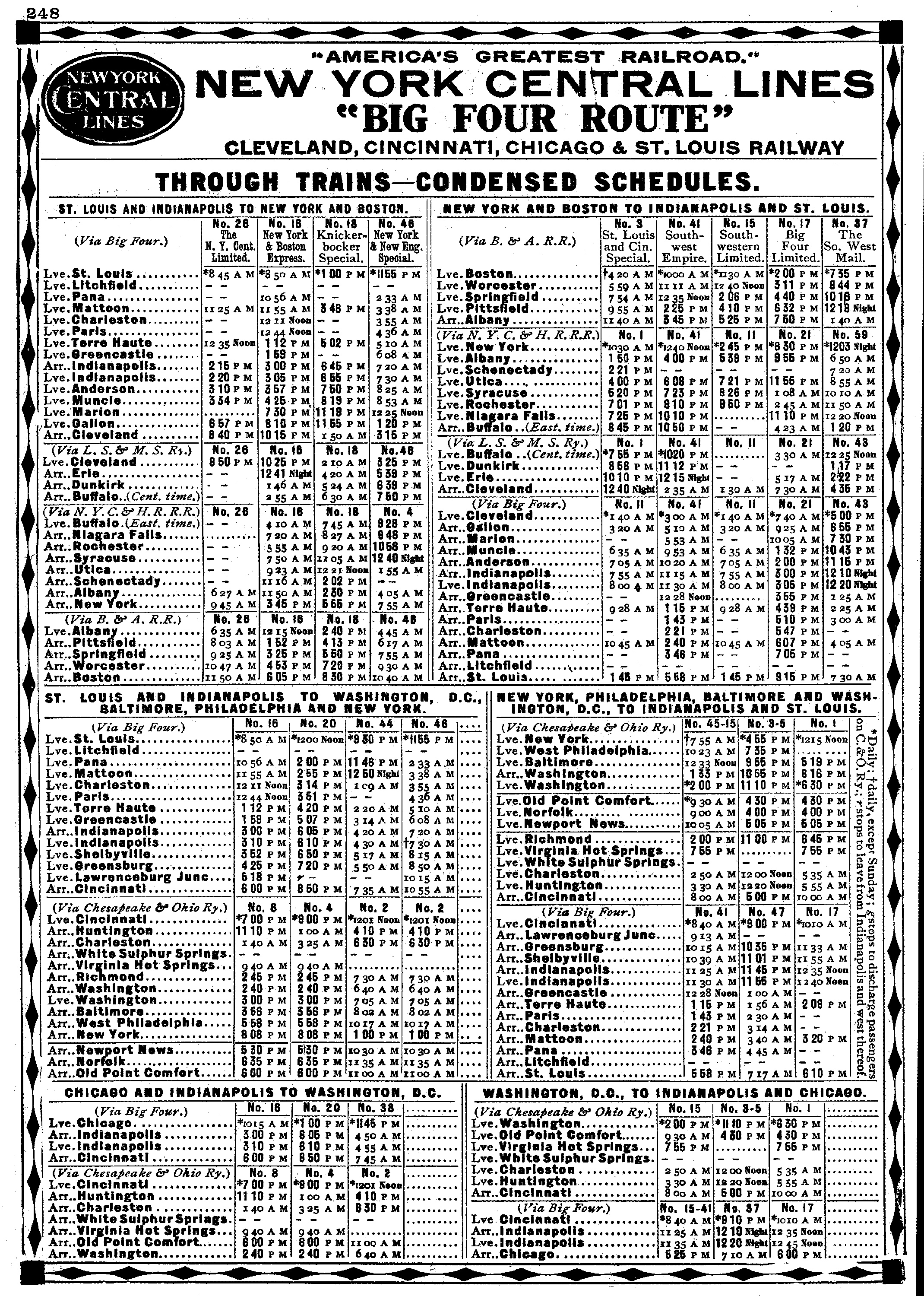 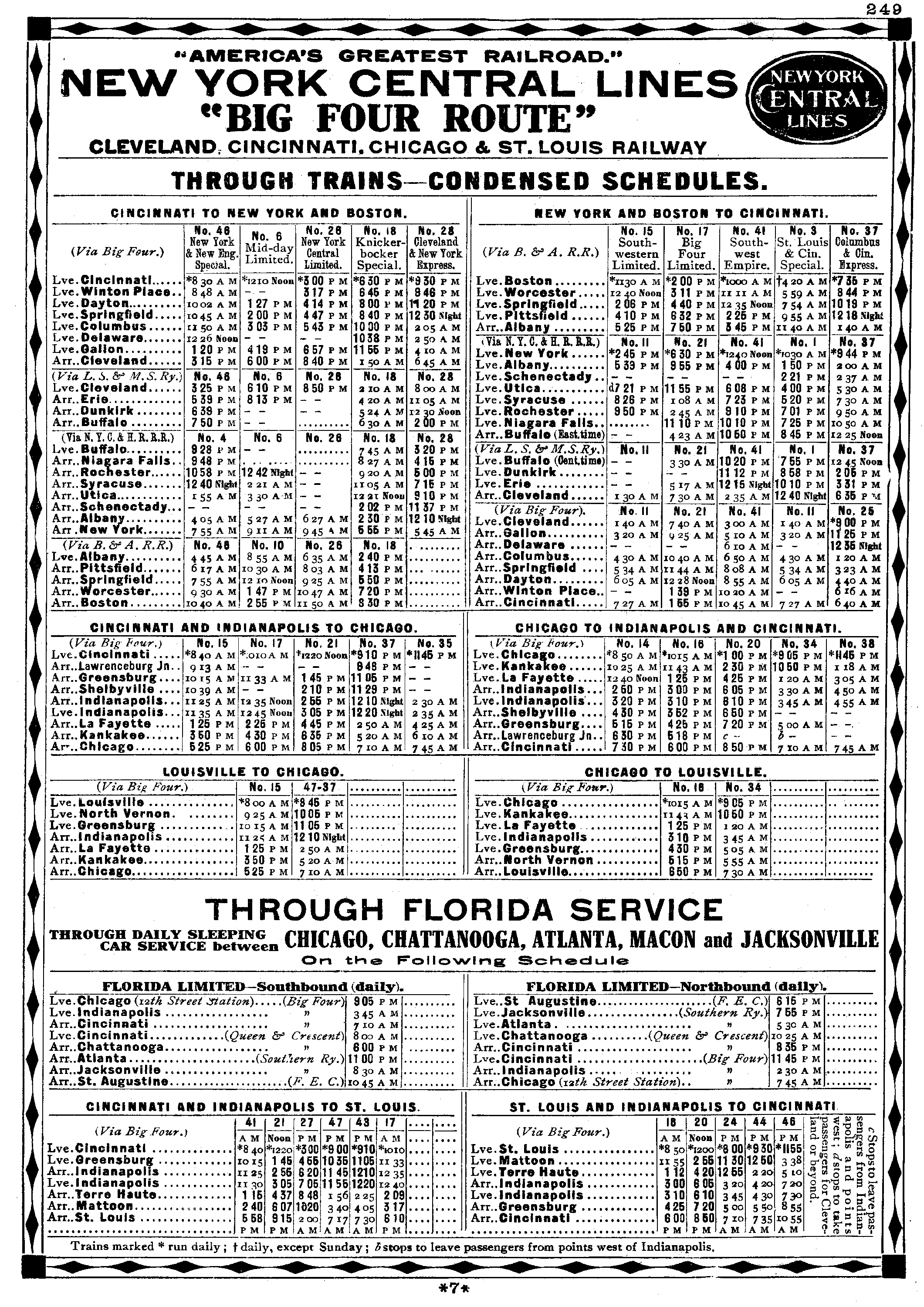 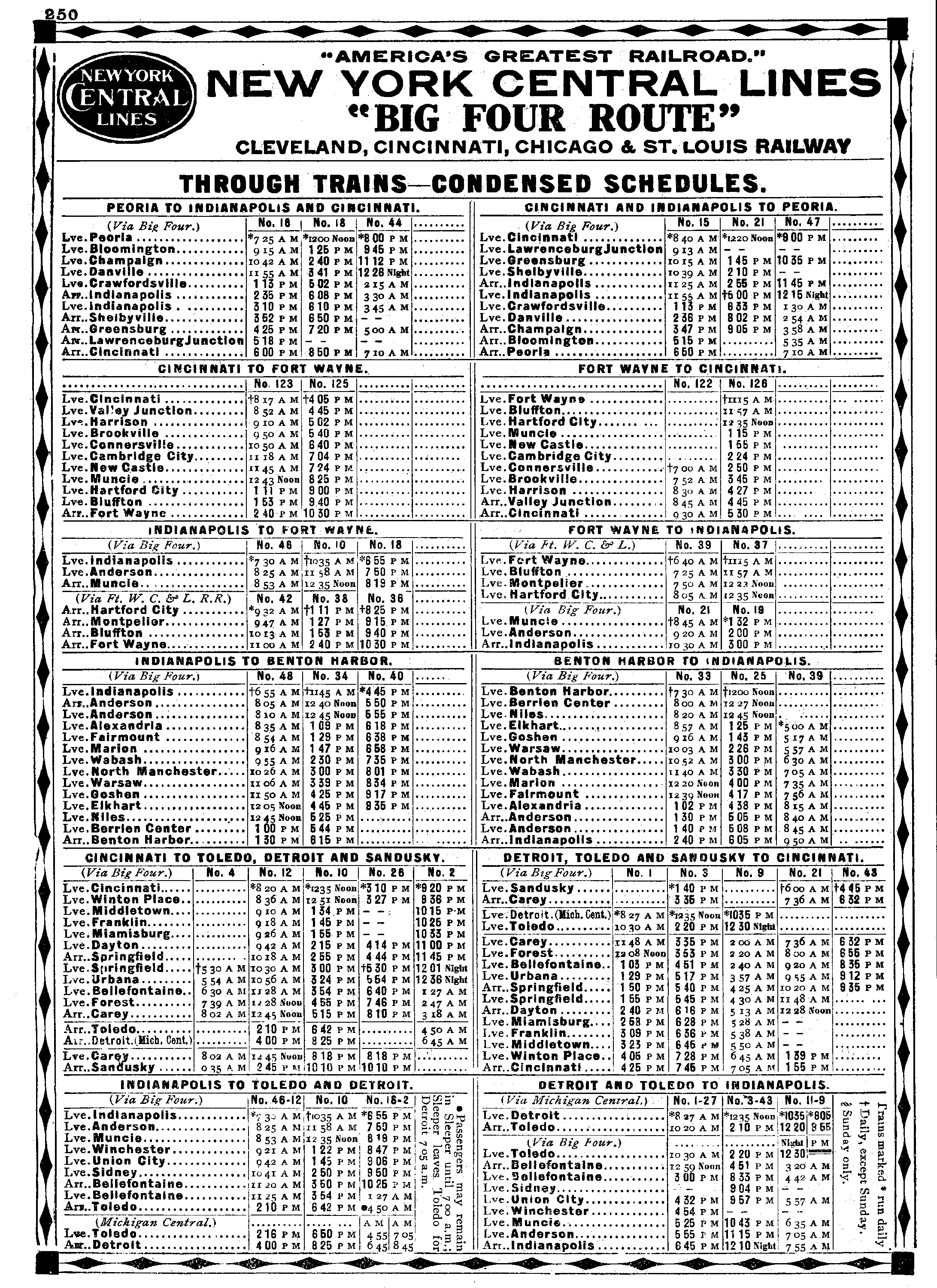 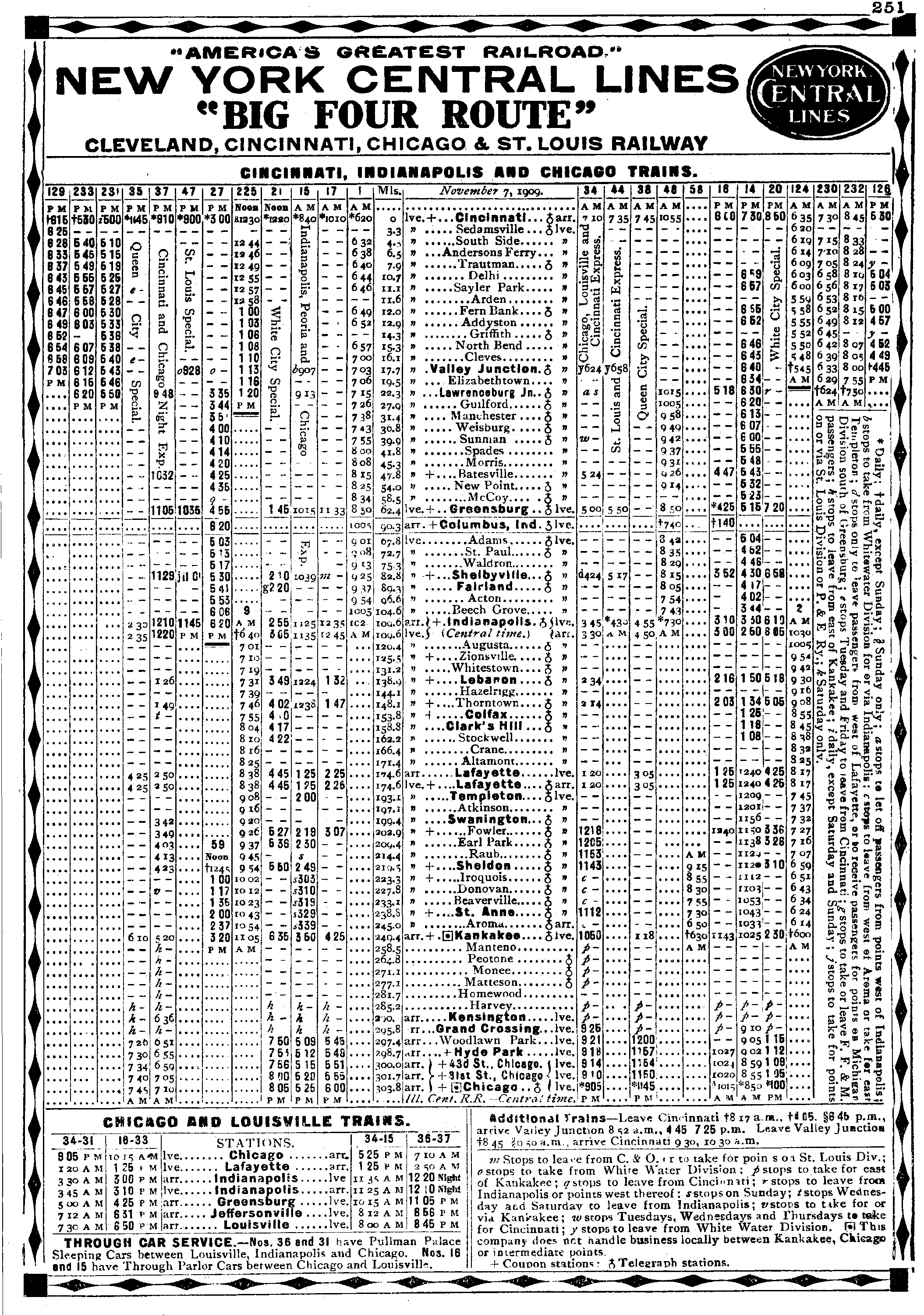 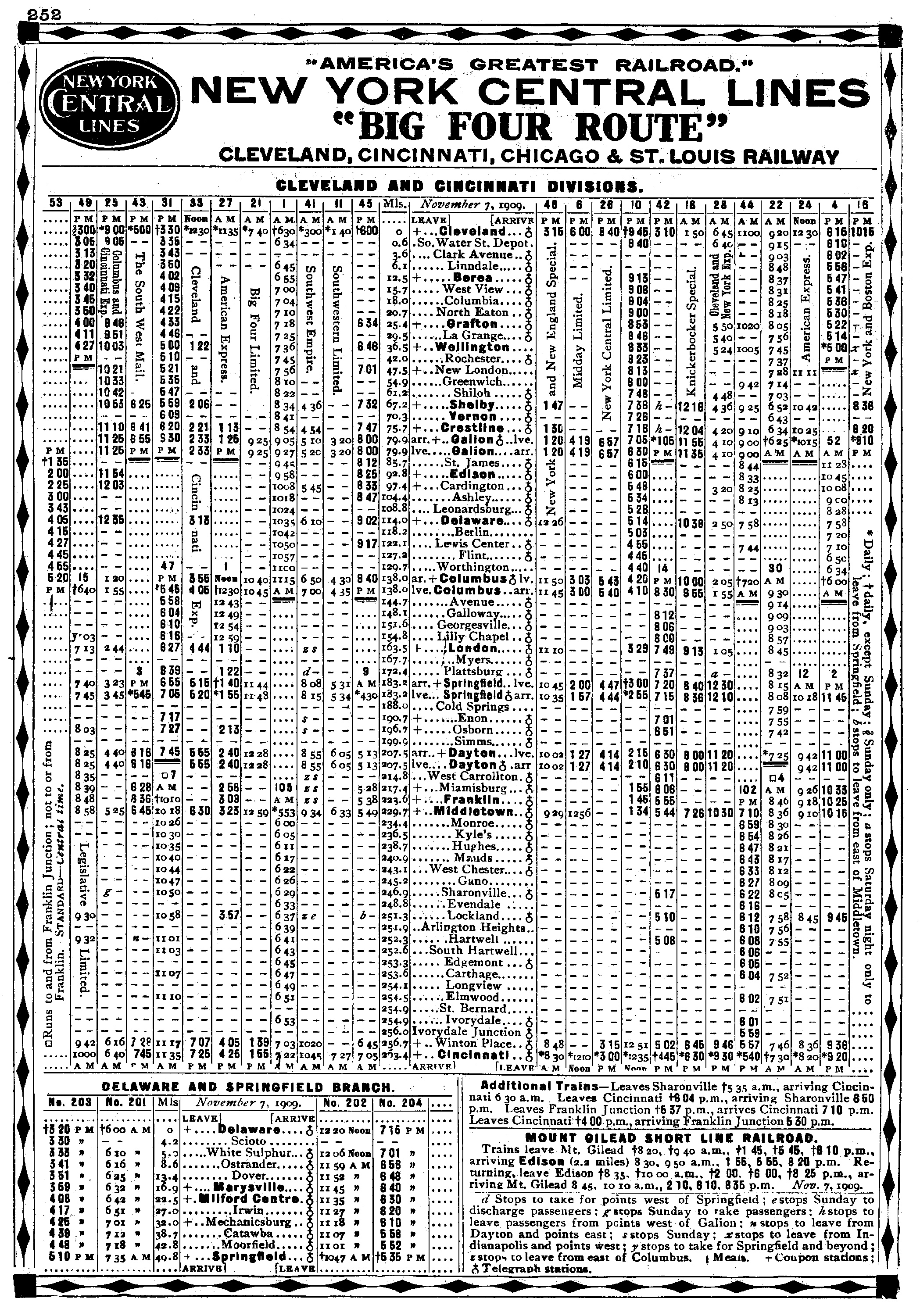 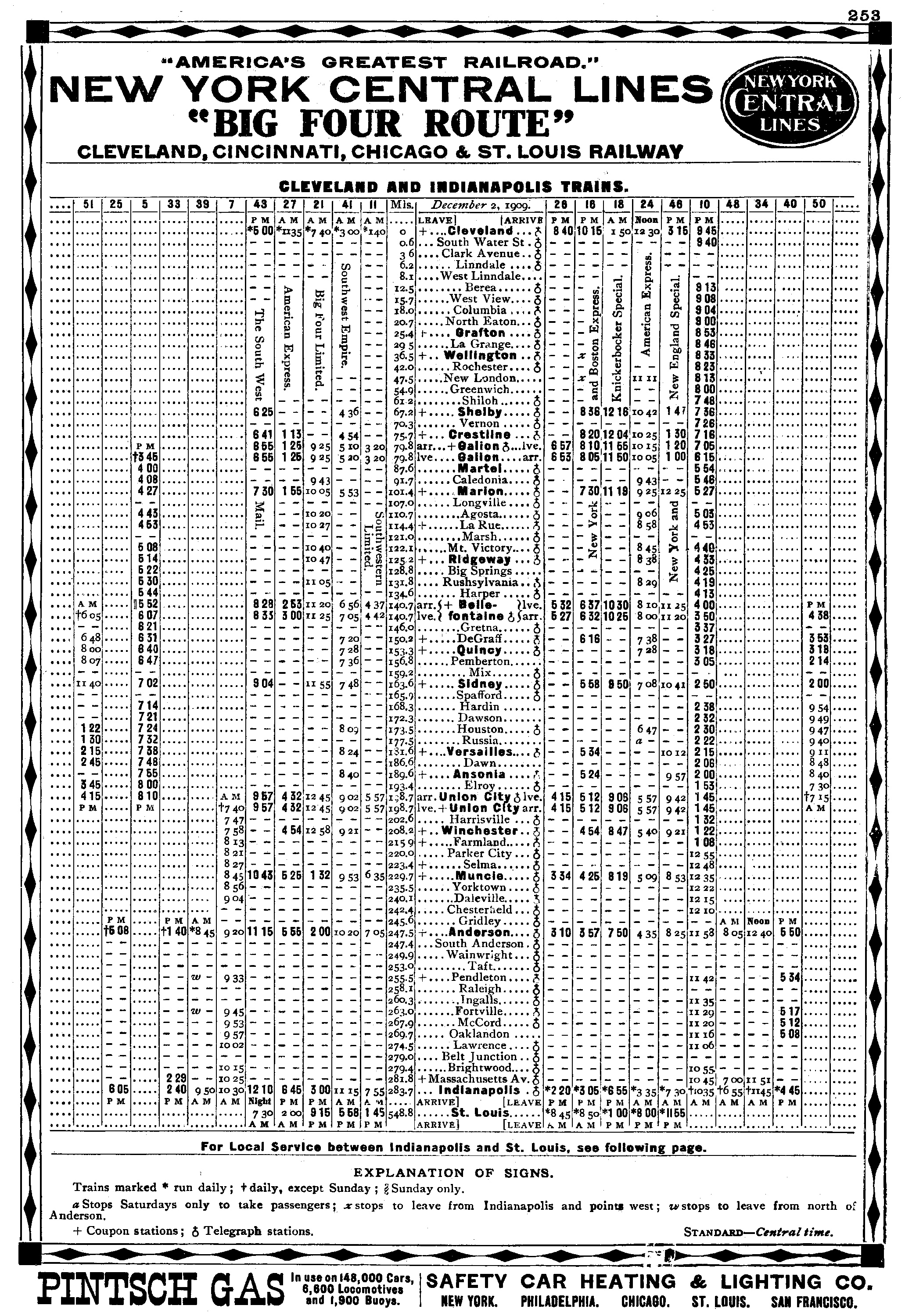 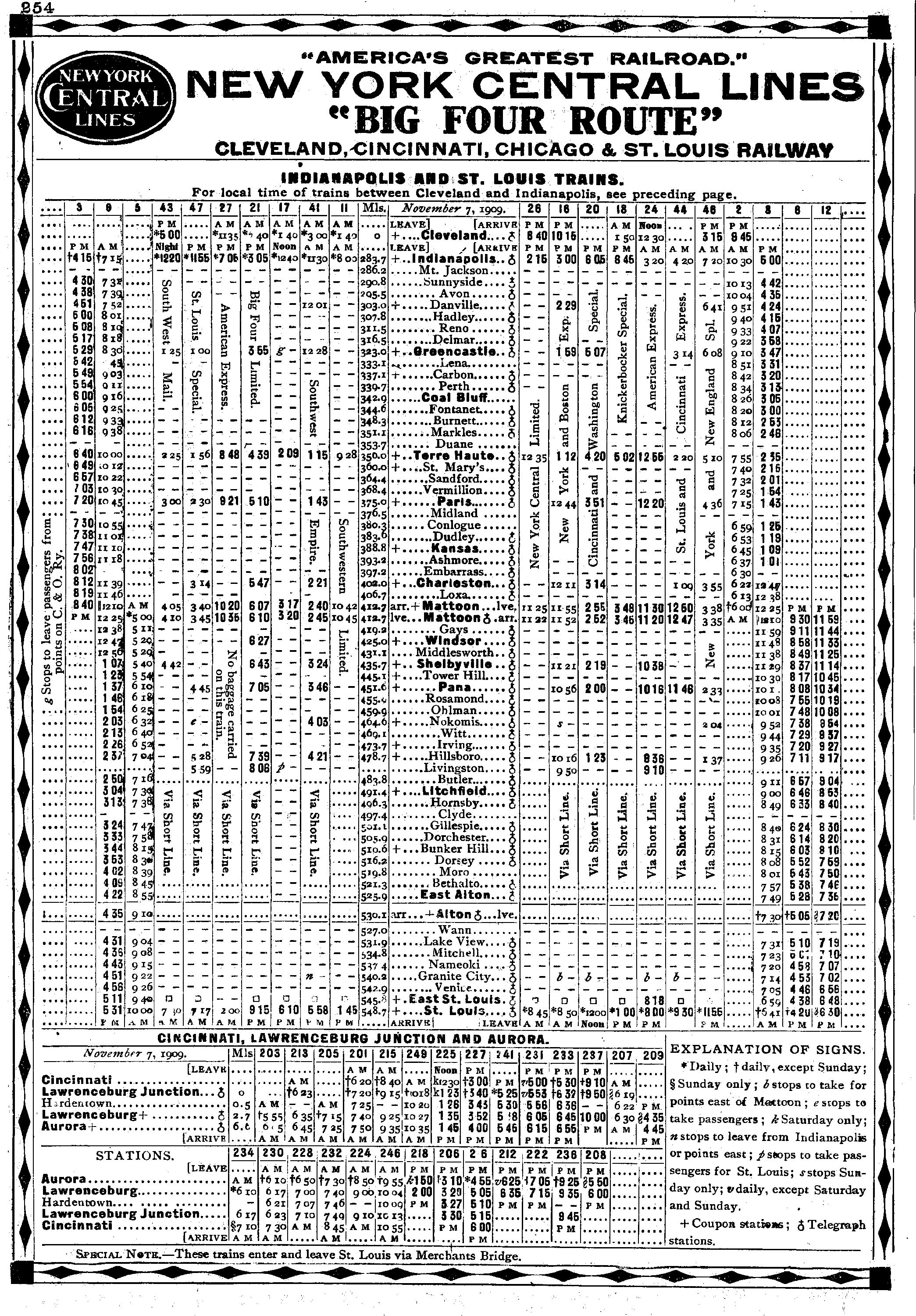 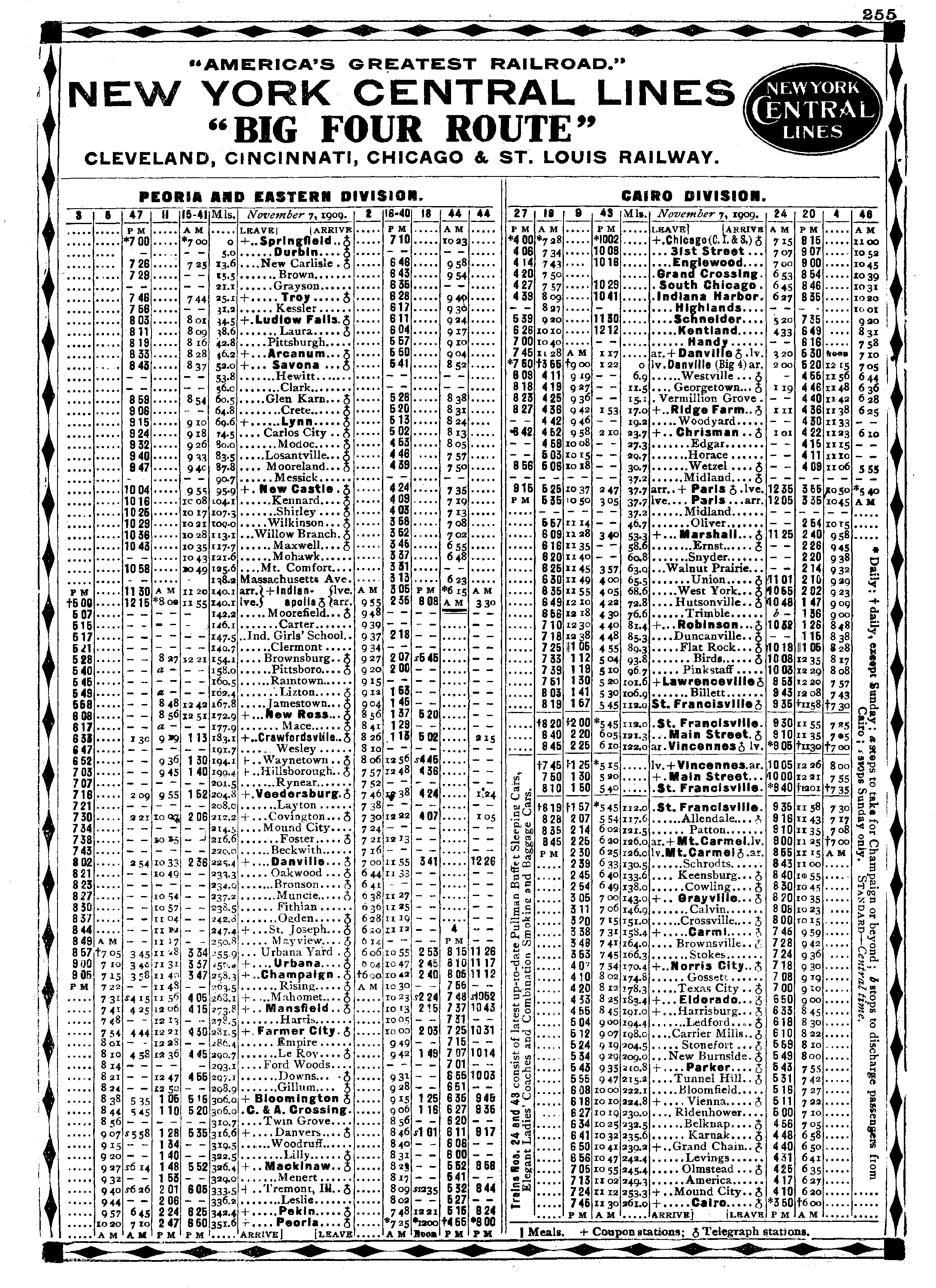 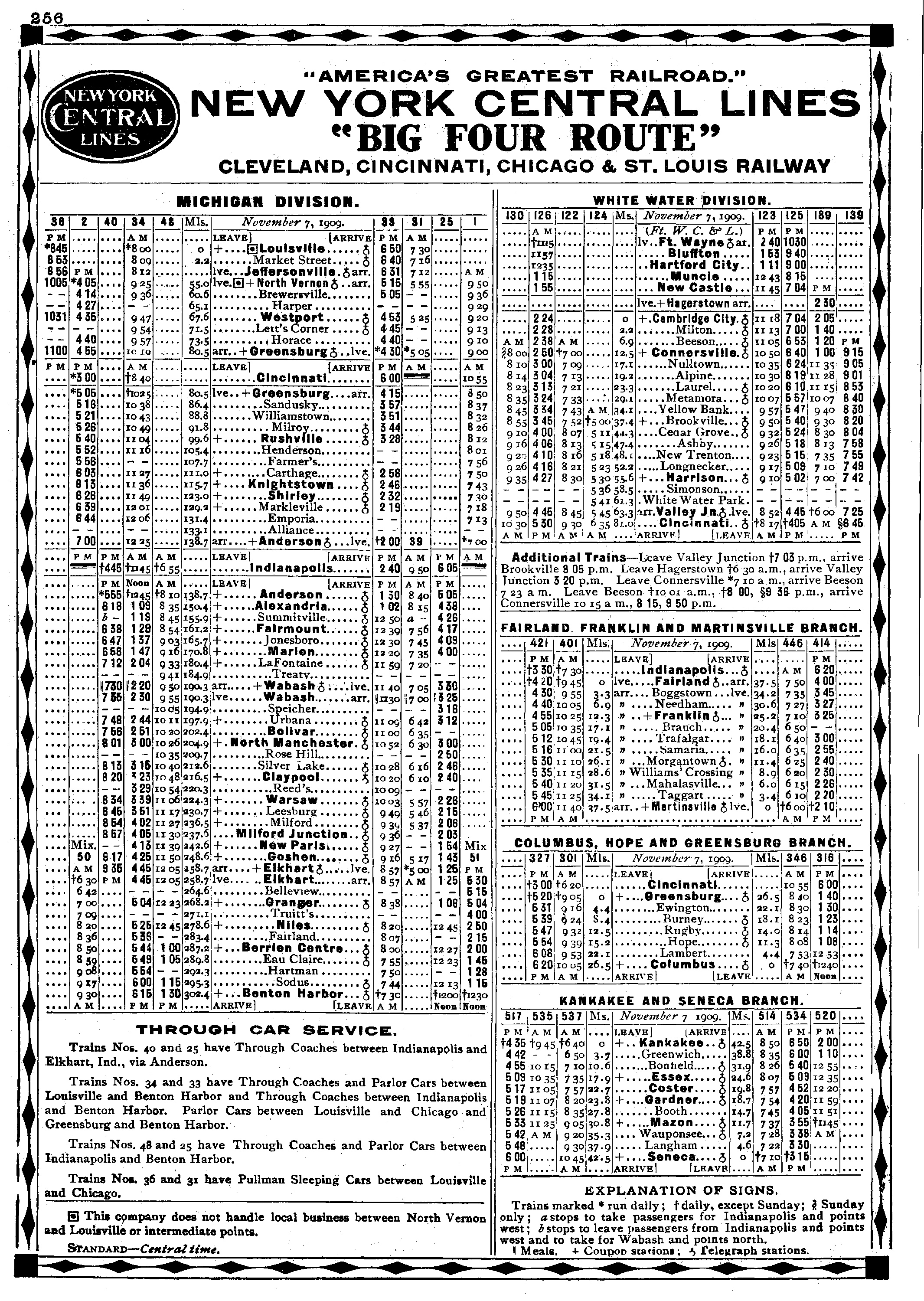 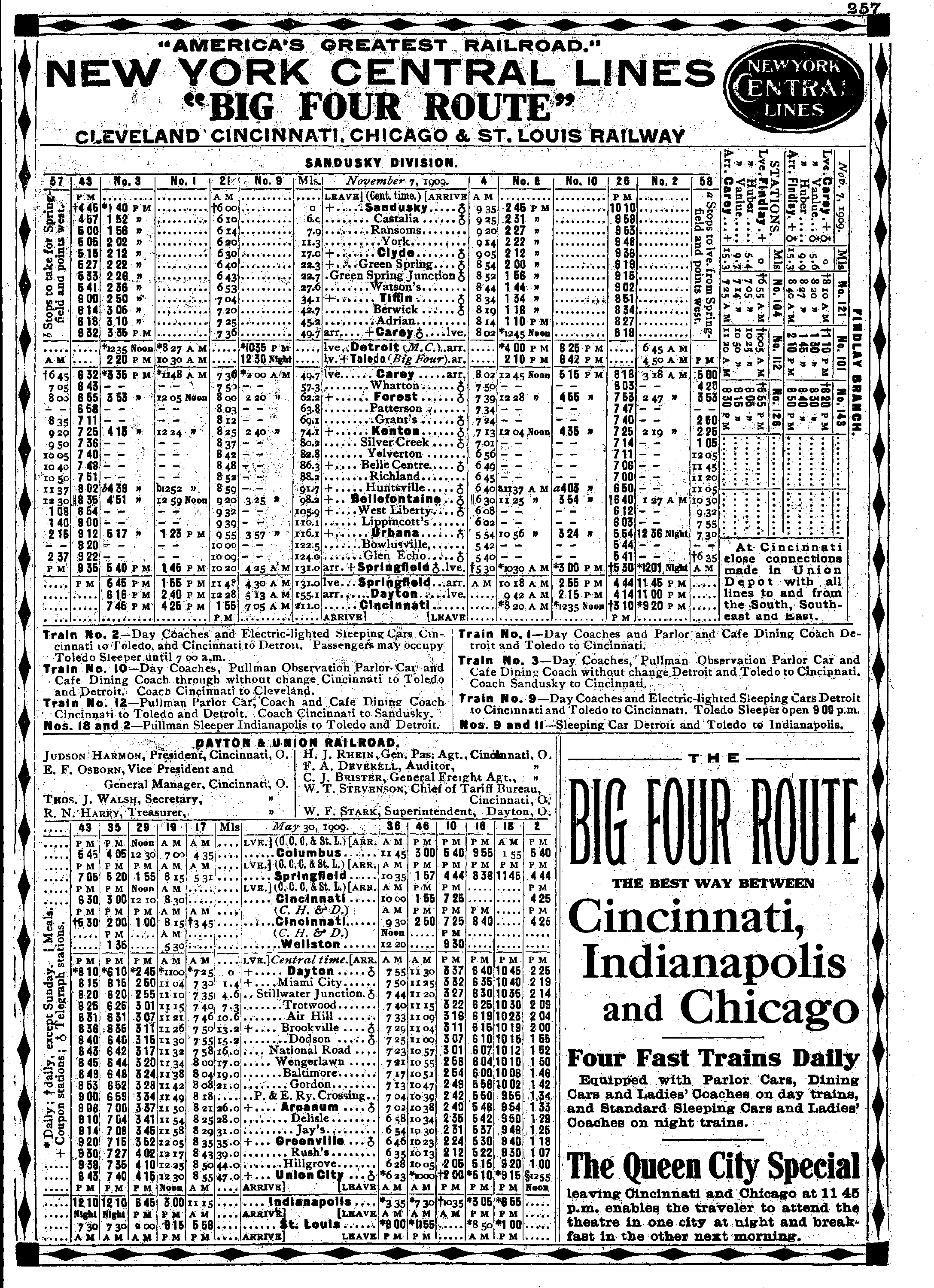 The CIStL&C also picked up the  Cincinnati, Lafayette & Chicago, which operated  a route from Indianapolis to Kankakee, Illinois.  There, a connection with the Illinois Central provided through service to Chicago.

Under new management, the CIStL&C was a well operated railroad.  It improved its Chicago connection and circumvented city congestion by building a western extension to Seneca, Illinois and a connection with the Rock Island.

By doing so, the Big Four obtained a better link into the Windy City.  By the 1880s, eastern giants Pennsylvania and New York Central & Hudson River were rapidly acquiring Midwestern systems to improve their competitive standing in the region.

For the NYC&HR it had fully acquired the Big Four and Bee Line by this time.  On June 30, 1889 it merged both into the newly created Cleveland, Cincinnati, Chicago & St. Louis Railway, the second "Big Four Route."

In conjunction with this move the Big Four picked up several other lines including:

This famous segment was originally built as the Cairo & Vincennes Railroad between 1870-1874 linking its namesake towns in Illinois, as well as Danville.  It earned the nickname as the "Egyptian Line" since its southern terminus (Cairo, Illinois) was spelled like the ancient capital of Egypt.

This name stuck into the New York Central era.  It was acquired in 1884 by the Vanderbilts, renamed as the Cairo, Vincennes & Chicago, and added to the new Big Four Route.  In the modern NYC era this route handled significant coal business.   Today, the line is gone south of Vincennes/St. Francisville.

Following financial difficulty in 1862 it was reorganized as the St. Louis, Alton & Terre Haute before being acquired by the Vanderbilts in the mid-1880s.

The history of the P&E can trace its heritage back to the aforementioned Mad River & Lake Erie (MR&LE), chartered in 1835.  It was Ohio's first railroad and tasked with opening a line from Sandusky to Dayton via Springfield.

It later joined the Cincinnati, Sandusky & Cleveland in 1866 and was subsequently sold to the Indiana, Bloomington & Western in 1881.  The IB&W maintained a rather large operation linking Sandusky, Springfield, Indianapolis, Danville, Bloomington, and Pekin.

Following financial difficulty in 1887 it became the Ohio, Indiana & Western which later became the Peoria & Eastern Railway.  The P&E went on to join the Big Four in 1890.  Interestingly, P&E markings could still be found on NYC equipment into the diesel era and it remained a corporate entity until the creation of Conrail in 1976.

This system began as the Cincinnati, Van Wert & Michigan Railroad, chartered in 1881 to build north from the Bee Line at Franklin, Ohio (Cincinnati).  It later linked up with the Jackson & Ohio Railroad at the Michigan state line where this road continued north to Jackson, Michigan.

The two merged in 1886 forming the Cincinnati, Jackson & Mackinaw Railroad.  The CJ&M was subsequently acquired by the Cincinnati Northern in 1897, a small terminal road linking Cincinnati with Dayton that had its own long history.  The Big Four then acquired all of the CN's stock holdings in 1902. 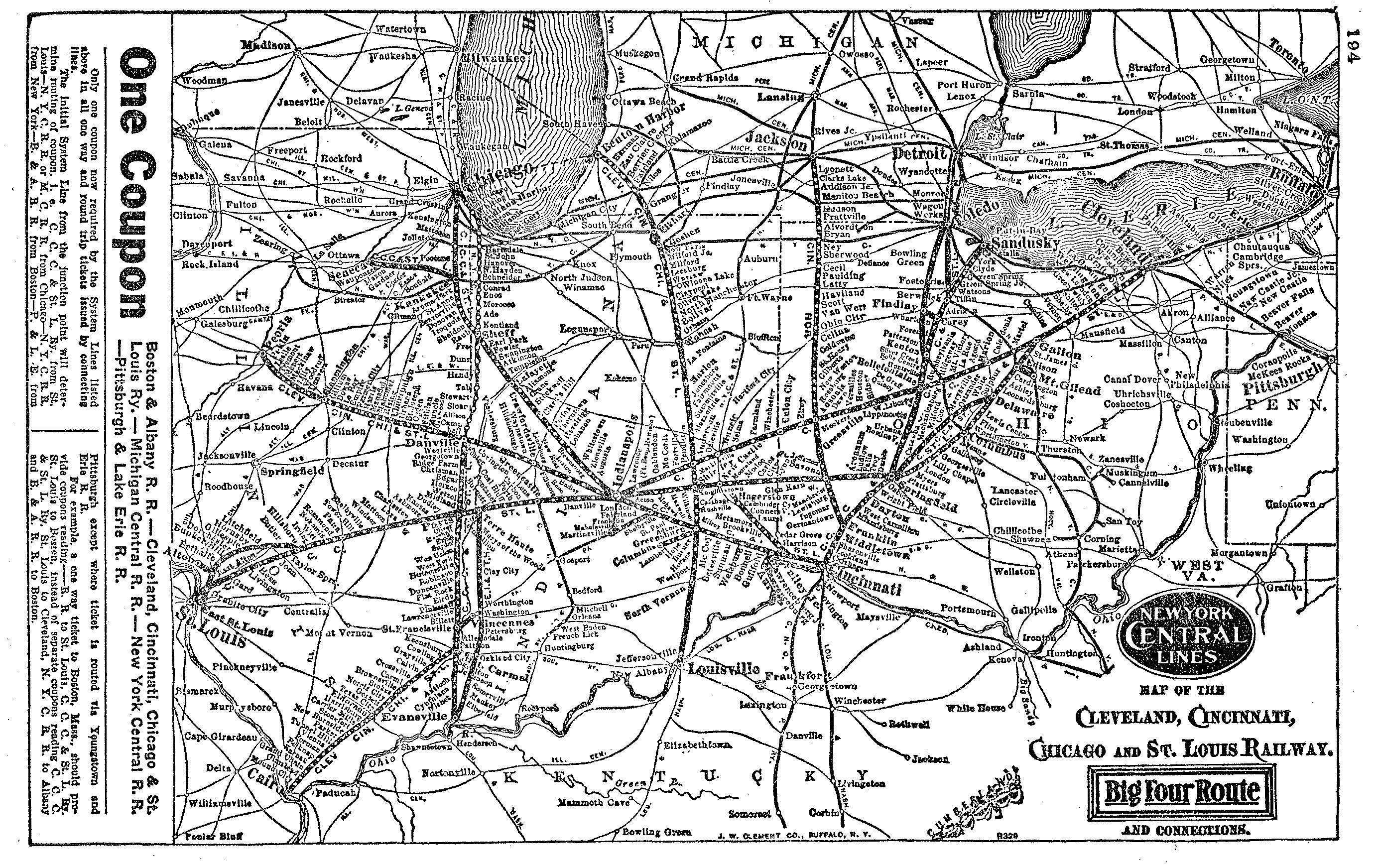 A 1930 system map of the Big Four Route showing the railroad's final appearance before formally disappearing into the New York Central. American-Rails.com collection.

While the Cleveland, Cincinnati, Chicago & St. Louis Railway had, technically, remained an independent entity well into the 20th century it had always been a Vanderbilt-owned property and operated as part of the NYC network.  In 1930, the New York Central formally leased the Big Four Route for 99 years. It remained a corporate entity until the creation of Conrail in 1976.

The Big Four Route was predominantly a paper-only system throughout the NYC era of the 20th century.  It comprised most of the Central's network west of Ohio and this territory was regularly referred to as the "Big Four."

However, equipment was typically devoid of any CCC&StL markings.  The Big Four was a vitally important component of the New York Central by providing connections to Cincinnati, Columbus, Indianapolis, Peoria, and St. Louis.

It also maintained secondary routes into Detroit, Chicago, Toledo, and other points.  The NYC's  self-proclaimed "Great Steel Fleet" offered premier services to these cities such as the Ohio State Limited, Southwestern Limited, Knickerbocker, and others.  Today, the key through routes of the Big Four continue on under CSX Transportation and Norfolk Southern.