The year 1830 was an exciting time in the new, fledgling railroad industry which saw the first U.S.-built steam locomotive ever operated in the United States that August, Peter Cooper's "Tom Thumb" along the Baltimore & Ohio.

A few months later in December, the first commercially operated steamer constructed in America went into service, the Best Friend of Charleston on the South Carolina Canal and Rail Road Company.

The locomotive's name came from its home base of operations, Charleston, South Carolina as during those early years it was actually common practice to name them.

Unlike the "Tom Thumb" the Best Friend featured a design that somewhat followed how all future steamers would be built.

Unfortunately, locomotives of this era were not exactly constructed to any type of standards or overseen by regulations and after less than one year of service it suffered a boiler explosion. Today, two replicas of the Best Friend survive and both are owned by South Carolina institutions. 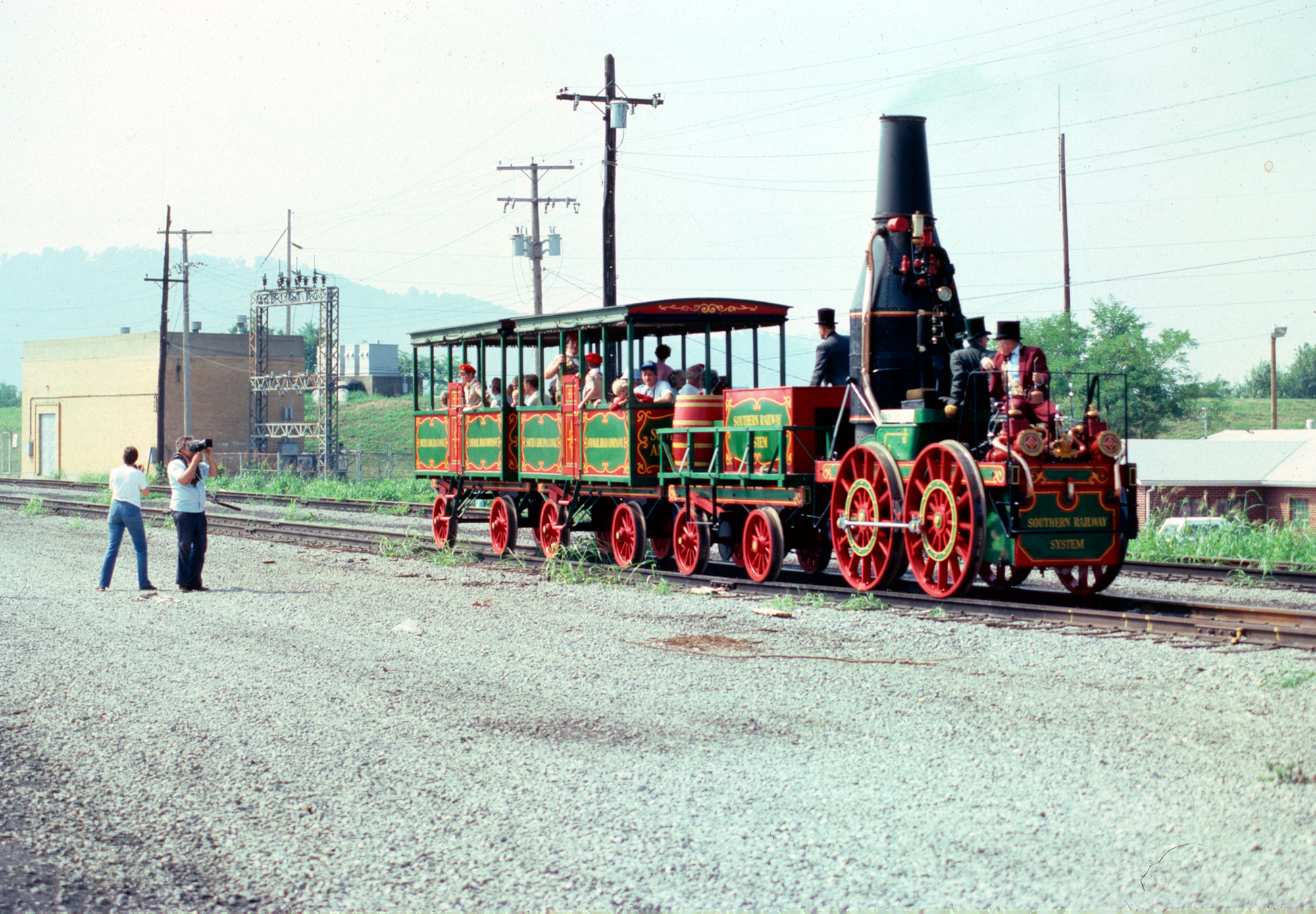 A replica of the "Best Friend of Charleston" stretches its legs in September, 1983. American-Rails.com collection.

By the mid-1820s the concept of railroads was gaining serious headway in the relatively new United States of America. With the development of the steam locomotive by Richard Trevithick of England who showcased his new invention on February 21, 1804, it was clear that railroads could play a vital role in the faster movement of people and goods.

Some small incline railways and local horse-drawn operations were in service in the Northeast although it was not until the B&O was chartered and organized on April 24th, 1827 was the first, true common-carrier line established in the country.

The B&O was created by Baltimore businessman who wanted to make sure that their city remained a vital port and did not want to be outdone by the newfangled canal systems.

The purpose of the company was to haul agricultural products from inland farms, notably the important cotton crop, to the port city for shipment.

The hope was to connect Hamburg, Columbia, Augusta, and Camden to the west along a route more than 140 miles in length with a canal spanning the gap between the Savannah and Ashley rivers (hence the "canal" in the name).

By the summer of 1830 the SCC&RR (also known as the Charleston & Hamburg Railroad) had 6 miles of track in service west of its terminal station and yard in Charleston.

The railroad's chief engineer, Horatio Allen, had been to England to test steam locomotives, as well as operate the Stourbridge Lion design being tested on the Delaware & Hudson Canal Company in 1829 (officially, the first such locomotive ever operated in the U.S. but was built in England).

After completing his study of this strange, mechanical beast Allen concluded:

"There is no reason to believe that the breed of horses will be materially improved, but the present breed of locomotives will furnish a power of which no one knows the limit."

Due to his recommendation the railroad placed an order for a new steam locomotive from the West Point Foundry based in Cold Spring, New York. In October, 1830 the SCC&RR received its order after it had been delivered aboard the ship Niagara.

Christened as the Best Friend of Charleston the locomotive was an 0-4-0 that burned standard wood and was capable of producing 6 to 8 horsepower with speeds reaching 30 mph empty or about 12 mph loaded (laughable, yes, by today's standards but a powerful machine in those days).

Overall, the unit weighed about 3.75 tons (minus water in the boiler and fuel/wood). It sported an upright boiler like Cooper's "Tom Thumb" but also featured some now-common steam designs such as rod-connected drivers and a trailing tender to store the wood (really just a two-axle flat car with small sides). 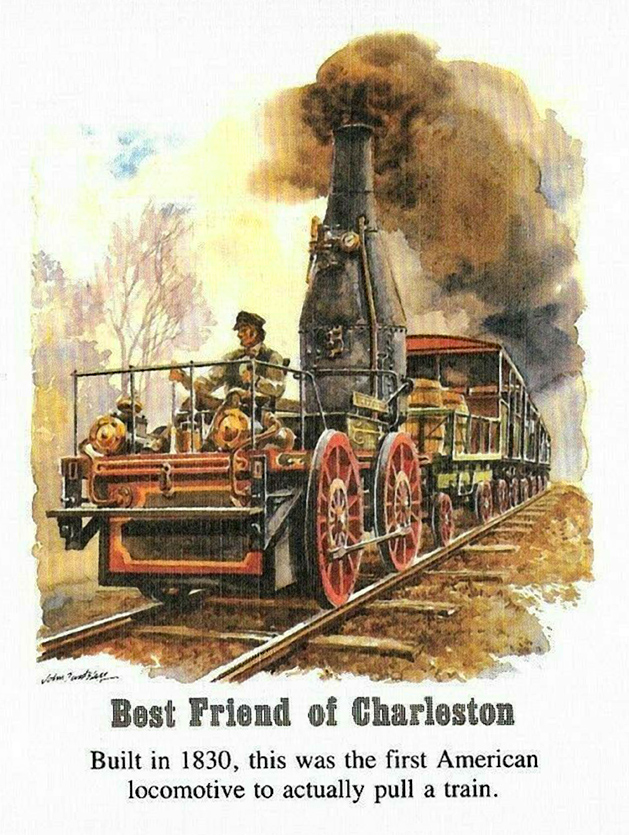 After arriving disassembled in Charleston it was rebuilt and ready for trails by November 2nd. From then until mid-December SCC&RR officials and engineers continued to test the locomotive to ready it for regular operation.

On Christmas Day of 1830, December 25th, the Best Friend of Charleston pulled away from the Camden Depot in Charleston (now a National Historic Landmark) carrying 141 paying passengers. The city's newspaper, the Charleston Courier noted:

"The one hundred and forty-one persons flew on the wings of wind at the speed of fifteen to twenty-five miles per hour, annihilating time and space…leaving all the world behind.

On the return…darted forth like a live rocket, scattering sparks and flames on either side…and landed us all safe at the Lines before any of us had time to determine whether or not it was prudent to be scared."

Upon departing the steam locomotive enshrined itself into the history books as the first ever to pull a regularly scheduled passenger train in the United States.

After this initial run the locomotive continued operating daily. It remained in service for six months until June 17, 1831 when its boiler exploded, partially destroying the locomotive and severely injuring its crew (as legend goes the fireman became tired of listening to the hissing and whistling coming from the boiler and held down the steam pressure release valve).

Regrettably, this incident also gave the Best Friend of Charleston another place in history, as the first locomotive in the U.S. to suffer a boiler explosion. After the incident the railroad salvaged parts from the Best Friend to construct the Phoenix, which remained in use until the start of the Civil War in 1861. 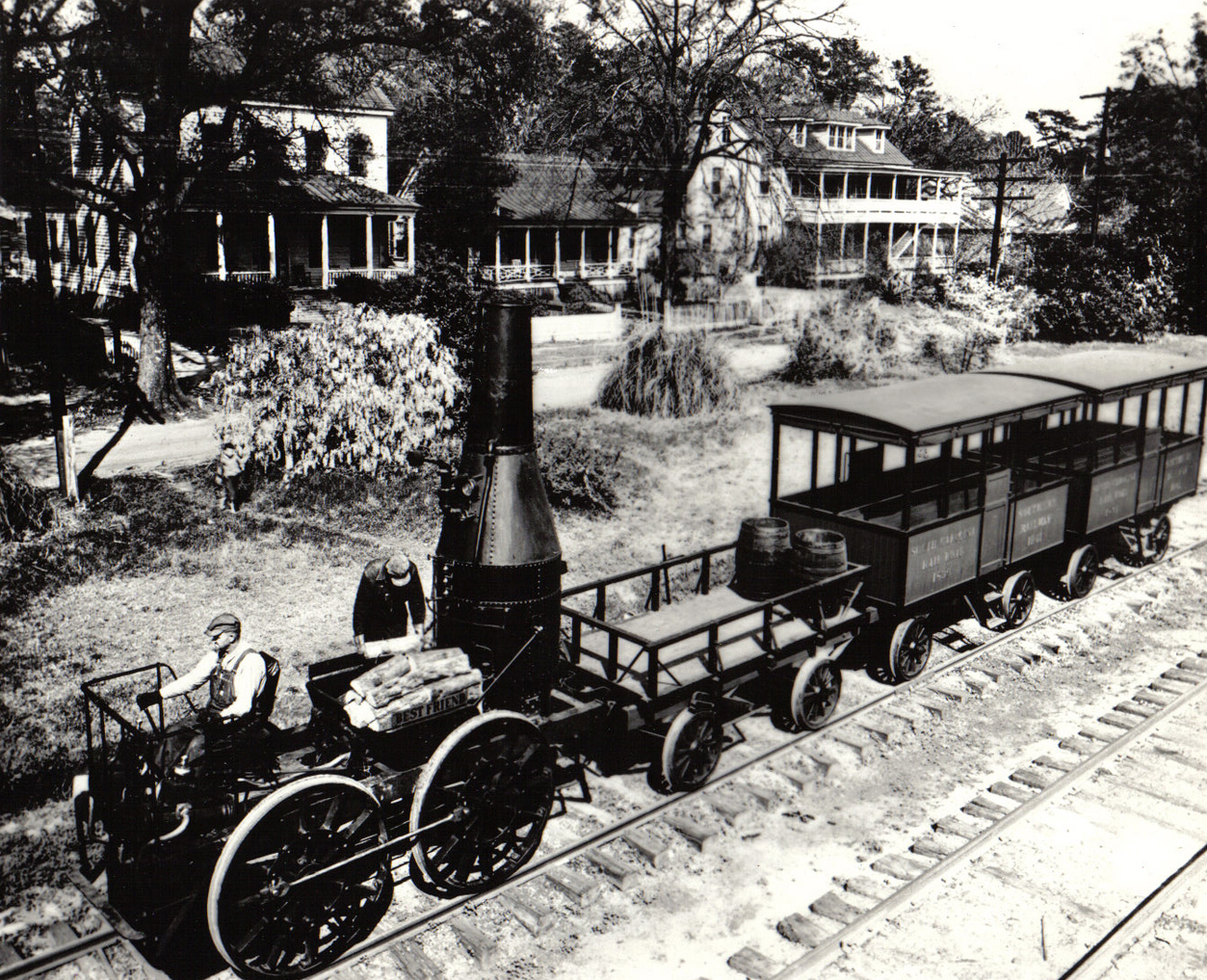 In 1928 an operable replica of the locomotive was completed using original blueprints upon which time it was donated to the city of Charleston in celebration of the South Carolina Canal and Rail Road's 100th anniversary.

Today, this replica is under the ownership of the Charleston Chapter of the National Railway Historical Society (NRHS)/Best Friend Museum although it has been loaned to Norfolk Southern Railway to display at their headquarters in Atlanta (the SCC&RR later became a subsidiary of the Southern Railway, an NS predecessor).

NS had the locomotive completely overhauled at its Chattanooga shops and it looks quite stunning repainted in its original ornate livery of red and green with gold trim. Of note, there is also another, non-operable, replica on display at the South Carolina State Museum, in Columbia.