The gandy dancer term has blossomed into folklore over the years, celebrated in several songs, books, and other mainstream mediums.

Despite its near mythical status it described a once very common job on the railroad, hard labor.  During the era before mechanized maintenance, railroads employed armies of workers to keep their rights-of-way ready for service.

The expression was slang although its actual etymology is not known.  Officially, these employees were referred to as section hands and performed any task which related to track such as laying/spreading/tamping ballast, replacing rail, hammering spikes, placing tie-plats, setting ties. etc.

Instead, they utilize expensive, heavy, computerized equipment to greatly speed up the process in maintaining our country's thousands of miles of rail lines.

Without these machines (such as should cleaners, ditch cleaners, undercutters, surface machines, ballast regulators, spike inserters/pullers, tampers, tie cranes, and rail grinders) it would otherwise be nearly impossible to do so! 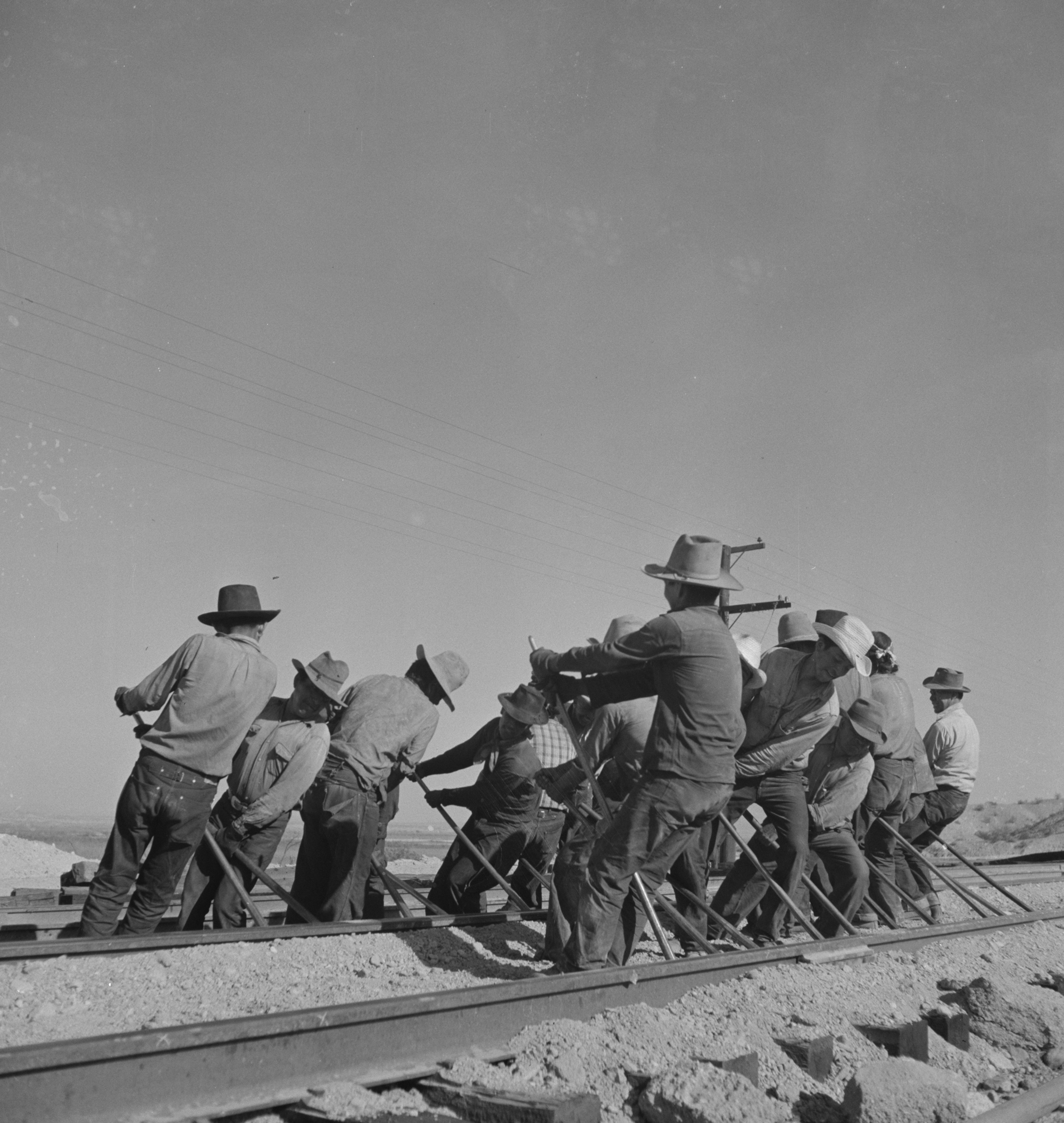 This is the common depiction of a gandy dancer, man working in unison to align track. This crew worked for the Santa Fe and is seen here near Needles, California in March, 1943. Jack Delano photo.

A Brief History Of The Gandy Dancer

Since the railroad industry took its first uncertain steps during the 1820's, leading to the Baltimore & Ohio's chartering in 1827, virtually all track maintenance was performed by manual labor for the next century.

It was the lowest paid profession in the field but nevertheless drew tens of thousands looking for any way to put food on the table.

This led to many immigrants or former slaves being employed to not only maintain the tracks but also help grade and lay new lines under construction.

With heritages ranging from Africans and Mexicans to Irish and Chinese, a virtual melting pot of cultures could be found out along the right-of-way.

Such diverse backgrounds often led to confrontations among the workers, all of whom were subsequently looked down upon by their foreman and other higher-ups.  As historian W. Thomas White points out:

"Between the completion of the first transcontinental link in 1883 (1869) and the early days of the New Deal, the Union Pacific, Great Northern, Northern Pacific, and Milwaukee roads [sic] all recruited laborers from widely divergent origins.

Native whites and northern and western Europeans dominated the skilled and semi-skilled trades.

Following the anti-Chinese campaigns and the passage of a series of laws restricting Chinese immigration in the 1880's, they [European immigrants] also dominated the unskilled section [and] construction sectors until the mid-1890's."

An Overview Of Railway Maintenance

A History Of Railroads

Their life was very difficult, living on meager pay and very hard work just to feed their family.  It was a similar circumstance for other immigrants. 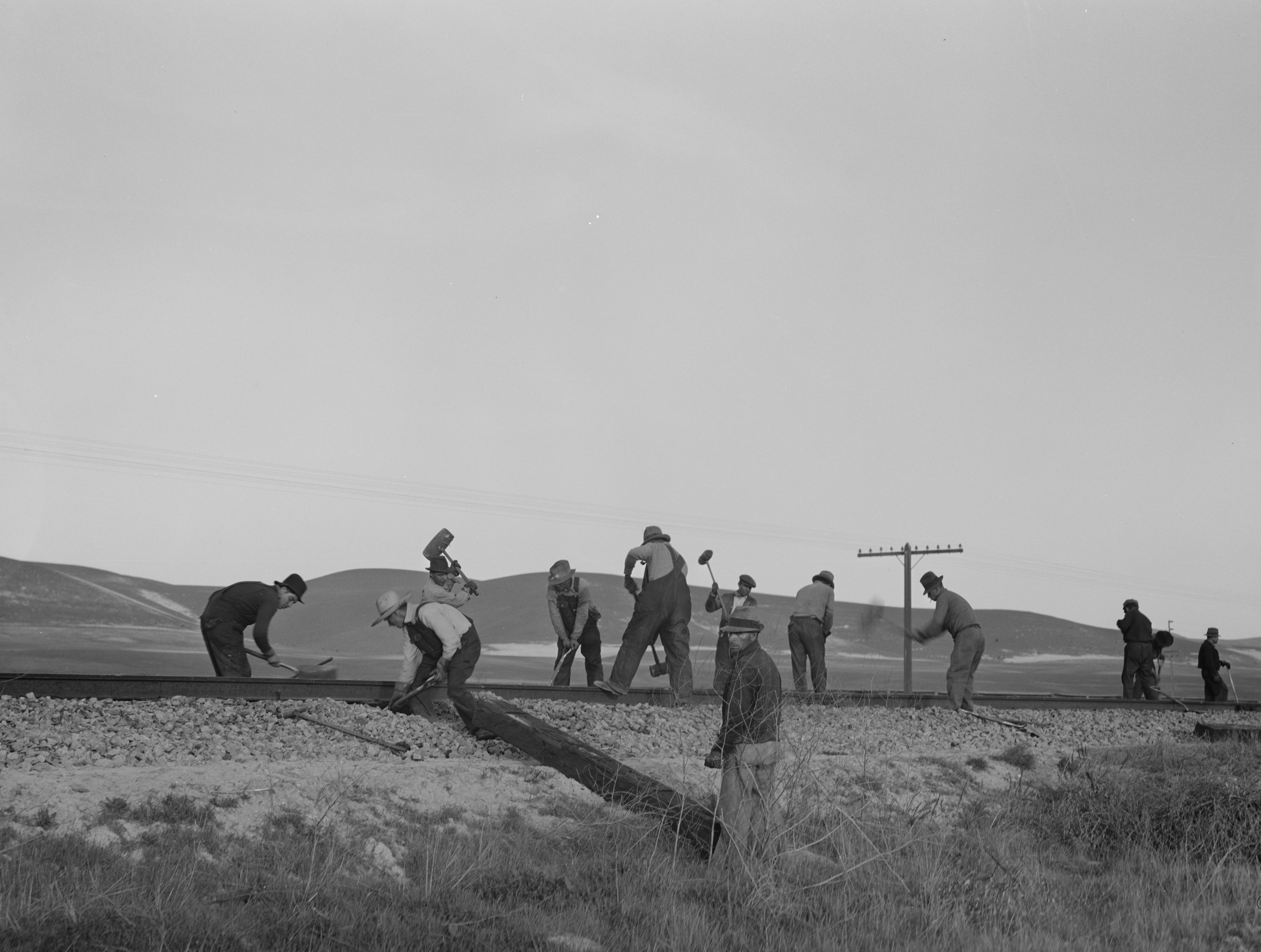 As the U.S. rail network expanded throughout the 19th century, the need for evermore workers increased accordingly.

In 1850 there were less than 10,000 miles in regular service, a number which jumped to over 30,000 a decade later.  By 1890 the United States commanded an impressive 163,597 miles according to John Stover's book, "The Routledge Historical Atlas Of The American Railroads."

Tasks for track workers ranged from driving spikes and setting ties to lugging heavy 39-foot sections of "stick" rail and laying gravel ballast.  There were even employees  for weed control.

- Early versions of rail usually weighed around 60 pounds per yard, which later increased to 90 pounds as demand for railroads increased which larger and heavier cars and locomotive.  By the 20th century, 100+ pound rail was common and remains the preferred weight today. - 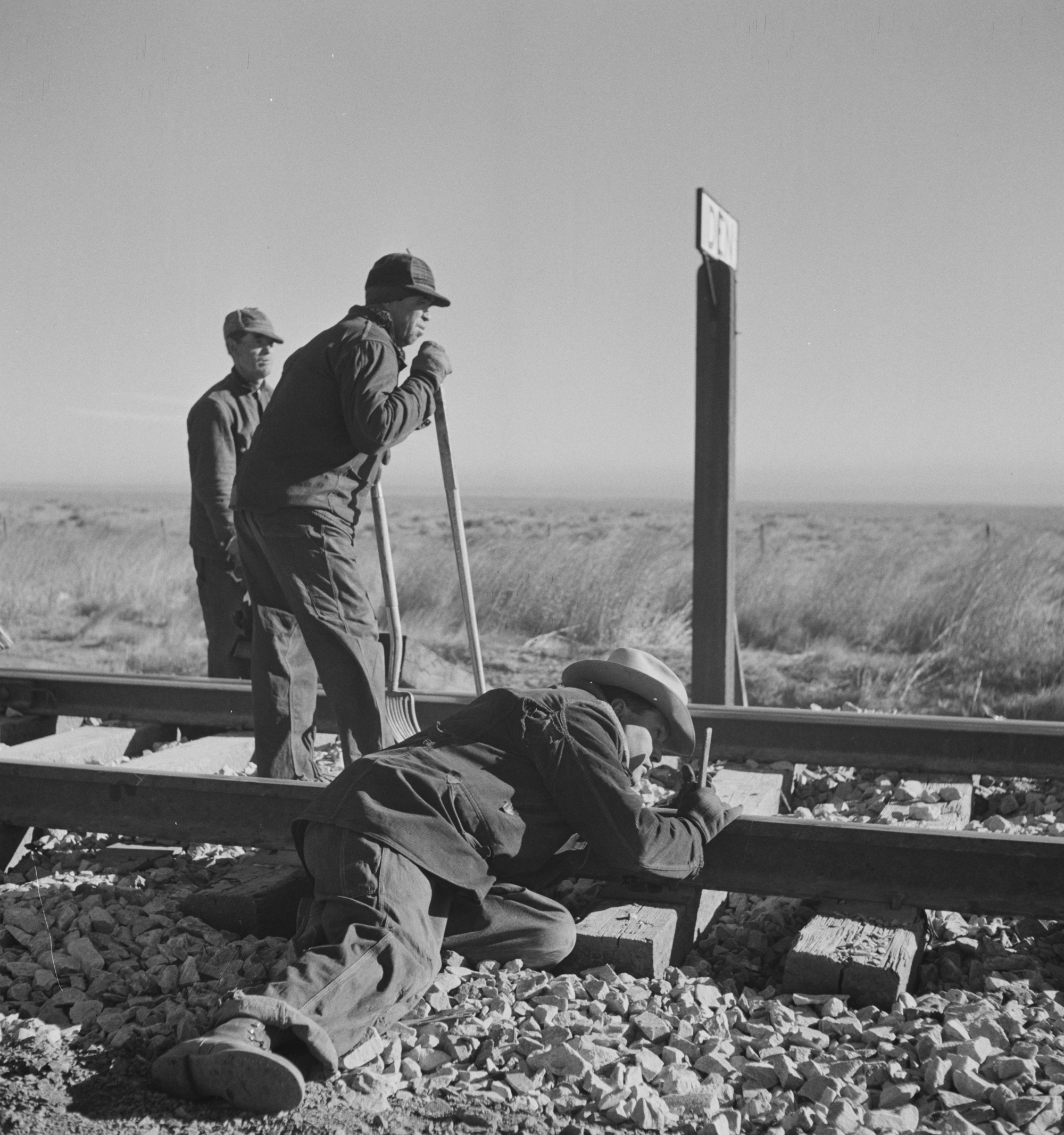 Naturally, such work meant one had to be in excellent physical condition despite the fact that pay was not particularly good.

The term "gandy dancer" sprang up to describe section gangs, a group of track workers previously mentioned.  These men did everything from laying ties to aligning the rails.

The origins of "gandy dancer" are unknown although "gandy" has sometimes thought to have originated from the Gaelic dialect while "dancer" denoted the unified motion workers would use to move rail into place (which led to several famous chants and songs over the years).

There are other sources which state the workers themselves came up with "gandy dancer.  However, historians have widely felt the term "gandy" was in reference to a tool manufacturing company that is believed to have been based in Chicago.

It was known as either the Gandy Shovel Company, Gandy Manufacturing Company, or Gandy Tool Company and produced many of the now widely-regarded hand-tools gandy dancers utilized during their daily work.

Whatever the case, by the latter 19th century the term was in widespread use as they became widely recognized for their songs and chants while working.

These melodies may have sounded strange to the general public but they had a real purpose in keeping the men on task and in unison.

What were known as "callers" were those individuals who led a tune; some were so good at this craft they would never repeat a single phrase!

"So gandy dancing goes in with the music. That's the way it’s been since way back. In the beginning of the railroad, you had to line it up.

That’s where the gandy dancers come in. And you even gandy danced behind a maul. Even spiking, you make the spike maul talk; you sing to it. Like when you’re driving a spike down. [We would sing] 'Big cat, little cat, teeniny kitten. Big cat!'

That’s you driving the spike as hard as you could. He’d holler, 'Make a wheel out of that maul.' And that means spike fast. And so, with two of us spiking, you make that maul talk! 'Big cat, little cat, teeniny kitten,” and that spike would be down.'" 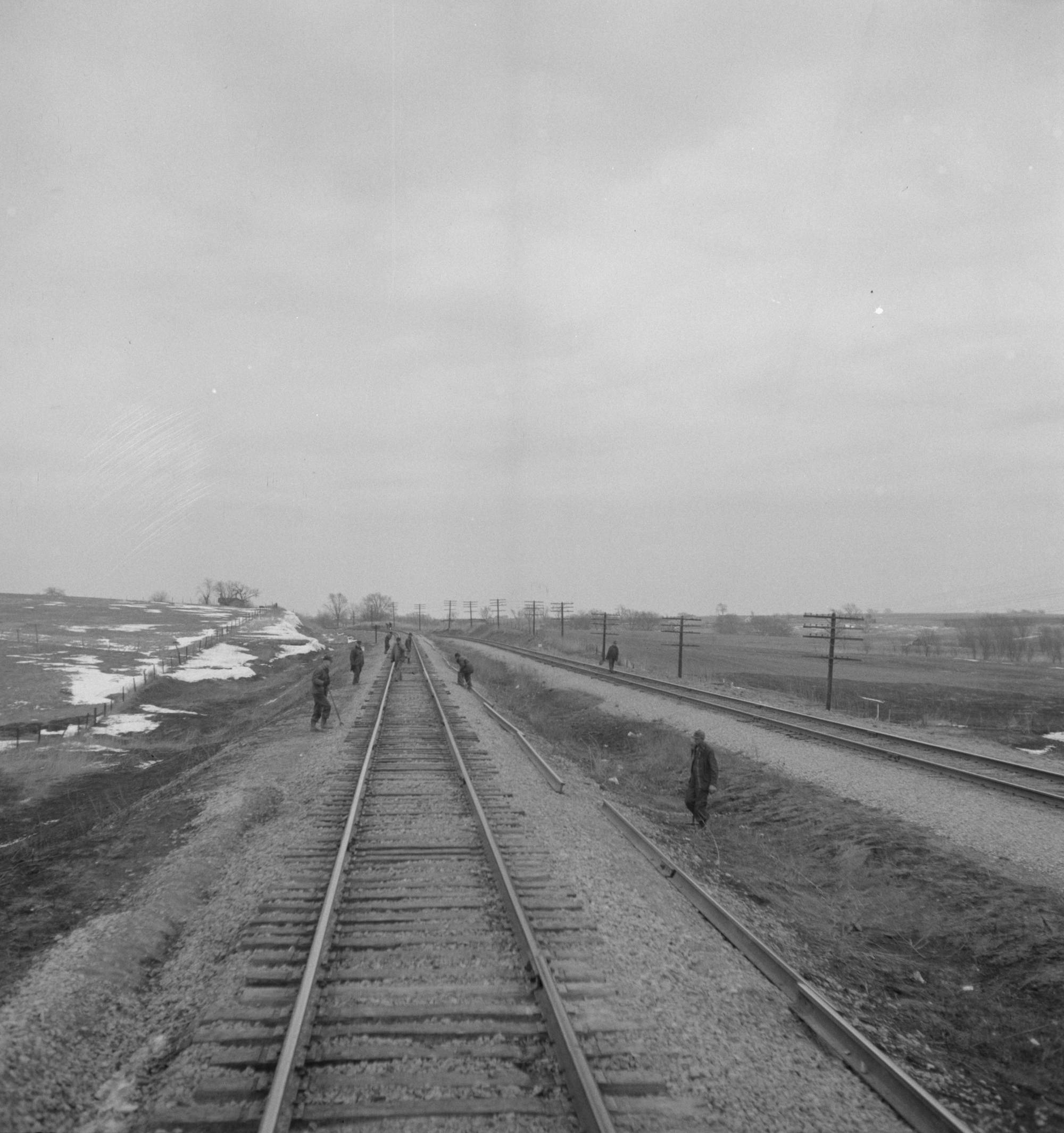 In this scene it appears Santa Fe track workers are about to replace sections of rail along the main line between Marceline, Missouri and Argentine, Kansas in March, 1943. Jack Delano photo.

As the 1800s rolled over into the 20th century railroads were finally able to employ actual mechanized equipment such as early track laying machines and steam shovels.

One of the first, true maintenance contraptions was the Jordan Spreader developed by Oswald F. Jordan that was first tested in 1905 and then made available for sale in 1911.

This machine provided railroads the ability to accomplish a wide range of tasks once done by gandy dancers including ballasting and grading, ditching digging, and even shoveling snow.

Additionally, it could perform these assignments much faster than by manual labor alone.

However, this integration was slow both due to the years it took in actually designing the equipment and putting it into service as well as railroads' generally slow adaptation of anything new. 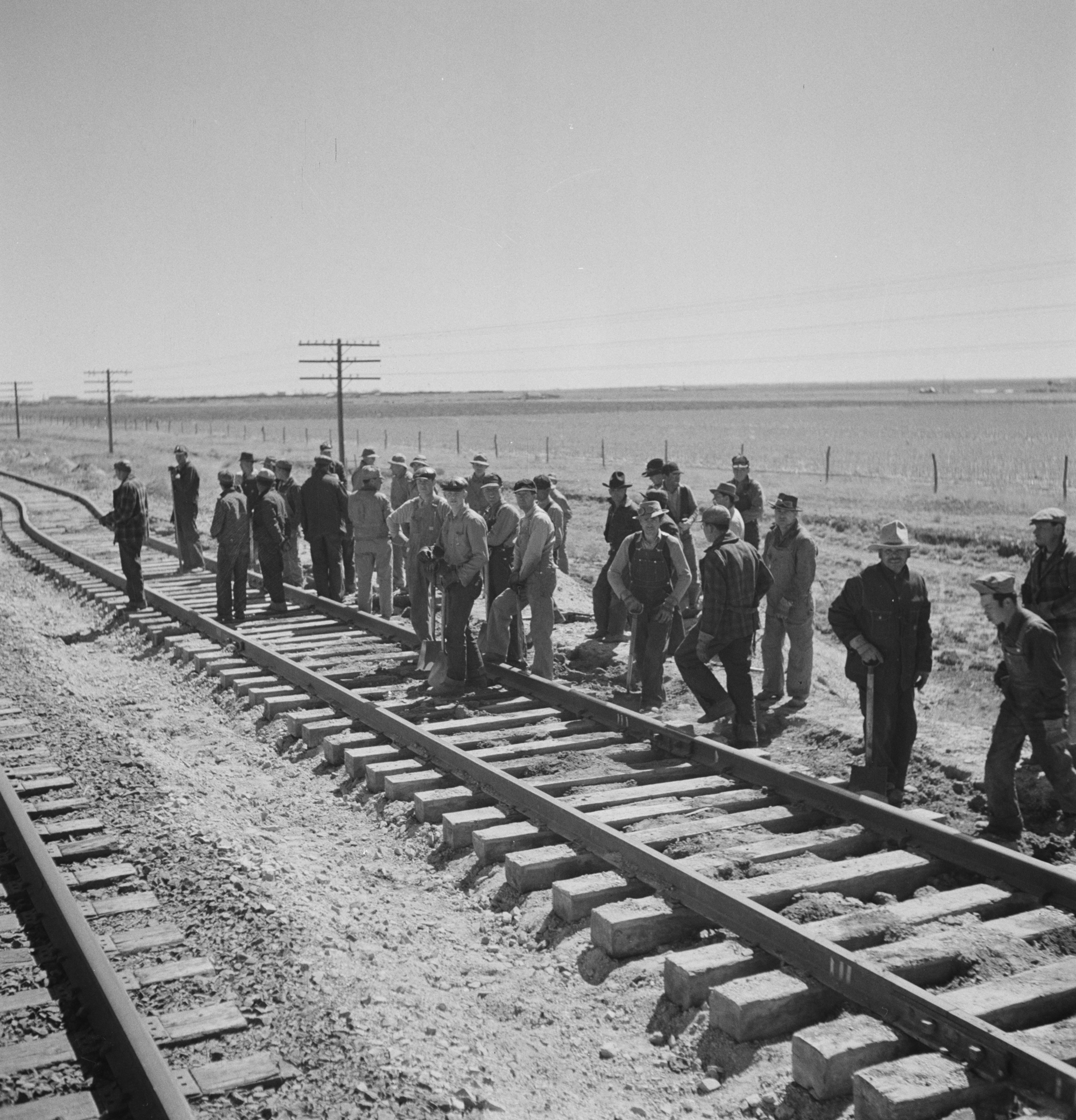 Jack Delano captured these gandy dancers taking a break between Clovis and Vaughn, New Mexico along the Santa Fe's main line in March, 1943. Note they are about to align the track.

As such, the classic gandy dancer could still be found out along road beds, albeit in far less numbers, well into the 1930s and 1940s.

Today, one can still see track work done manually on an as-needed basis, particularly on small short lines or tourist railroads, which do not have the necessary equipment as the major Class I and larger Class II's employ.

However, such work has almost entirely been taken over by the MOW machines mentioned above on larger regionals and Class Is.

In today's industry the manual section gang has been replaced by tie gangs, steel gangs, and/or general mechanized gangs which complete the work much more quickly and efficiently.

Interestingly, while the gandy dancer is a thing of the past it continues to hold on in mainstream folklore such as the song "The Gandy Dancers' Ball" written by Frank Laine in 1951 and "Moose Turd Pie" by Bruce Phillips.

There was also the title of "Gandy Dancer" as sung by The Ventures in 1962  Today, the term is widely used throughout pop culture although much of the public is not aware of its meaning or history.

There are restaurants, theaters, rail/trails, bars, and even video game characters named for the gandy dancer.