Throughout the years Union Pacific offered a long, laundry list of different named passenger trains across its vast system.  One of these, established in the pre-streamliner era during the mid-1920s was known as the Gold Coast Limited.

It supplemented the then first-class Overland Limited between Chicago and Oakland/Los Angeles.  For many years the train operated as an all-heavyweight affair although in its final years (during the era of the lightweight City fleet) it did carry some semi-streamlined, modernized heavyweight equipment.

The onset of the Great Depression, only a few years after the train launched caused its cancellation although it was later brought back to the timetable after World War II before being discontinued permanently in 1955. 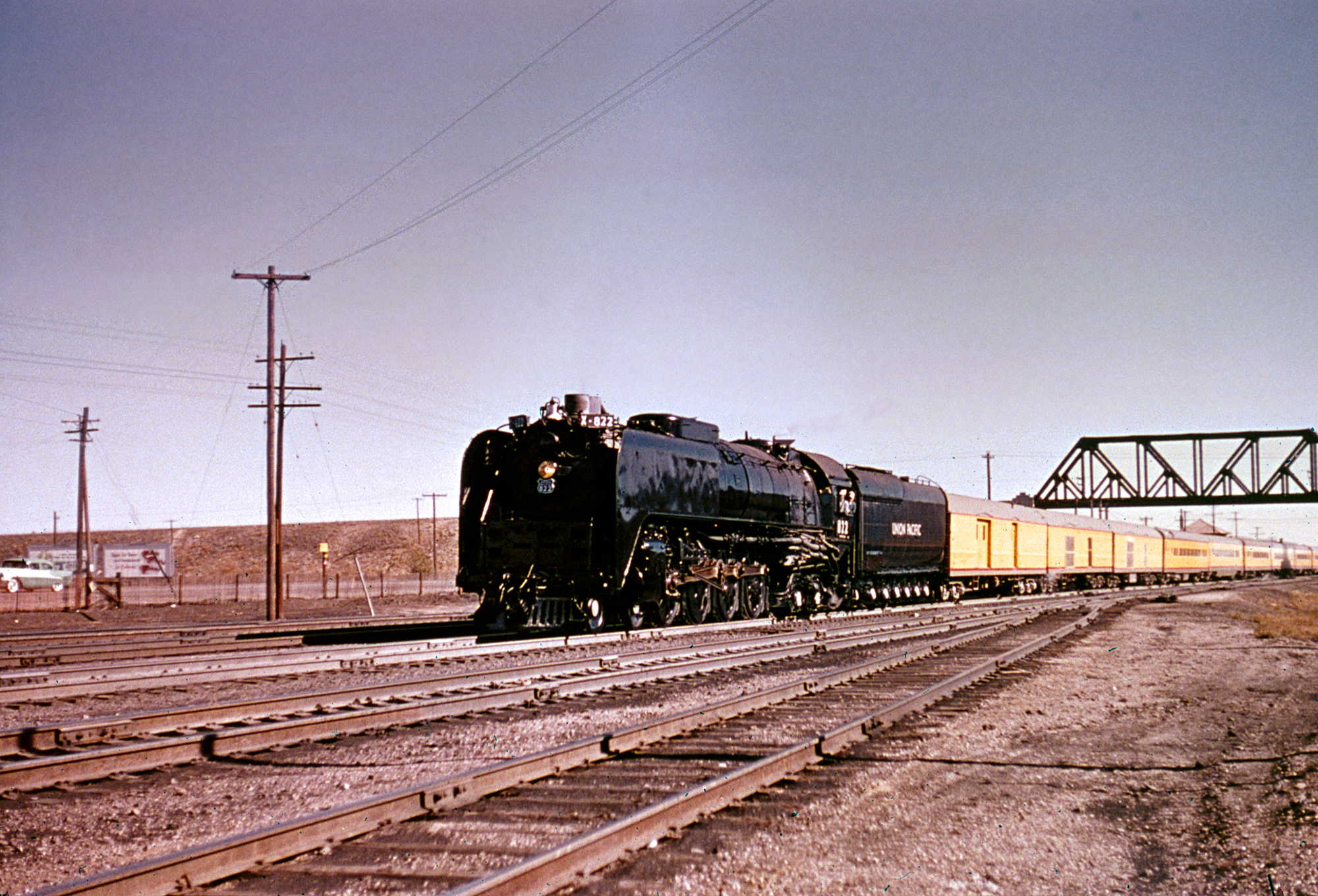 A Brief History Of The Gold Coast

All secondary trains in nature they complemented UP's then first-class runs the Overland Limited (established in 1896 by renaming the former Overland Flyer connecting Oakland/San Francisco and Chicago, working in conjunction with the Chicago & North Western and Southern Pacific between each end point) and Los Angeles Limited (inaugurated in 1905 between Los Angeles and Chicago).

The Gold Coast Limited was established on November 14, 1926 running on a slower schedule of the Overland and stopped at those stations passed over by the first-class train.

While the Gold Coast sported an all-Pullman, heavyweight consist it was tailored towards the middle-class as a cheaper alternative to its counterpart.

When the train debuted Union Pacific spent a great deal of effort promoting the train through its 68-hour schedule (about five hours slower than the Overland, which had been cut to a 63-hour running time) and its many on board amenities.

According to the railroad these included, "All-Pullman, bath, barber, valet, maid, and manicure [services].  Open top observation car through the mountains and orange groves of California.  The same fine service eastbound."  The entire ad can be viewed below. 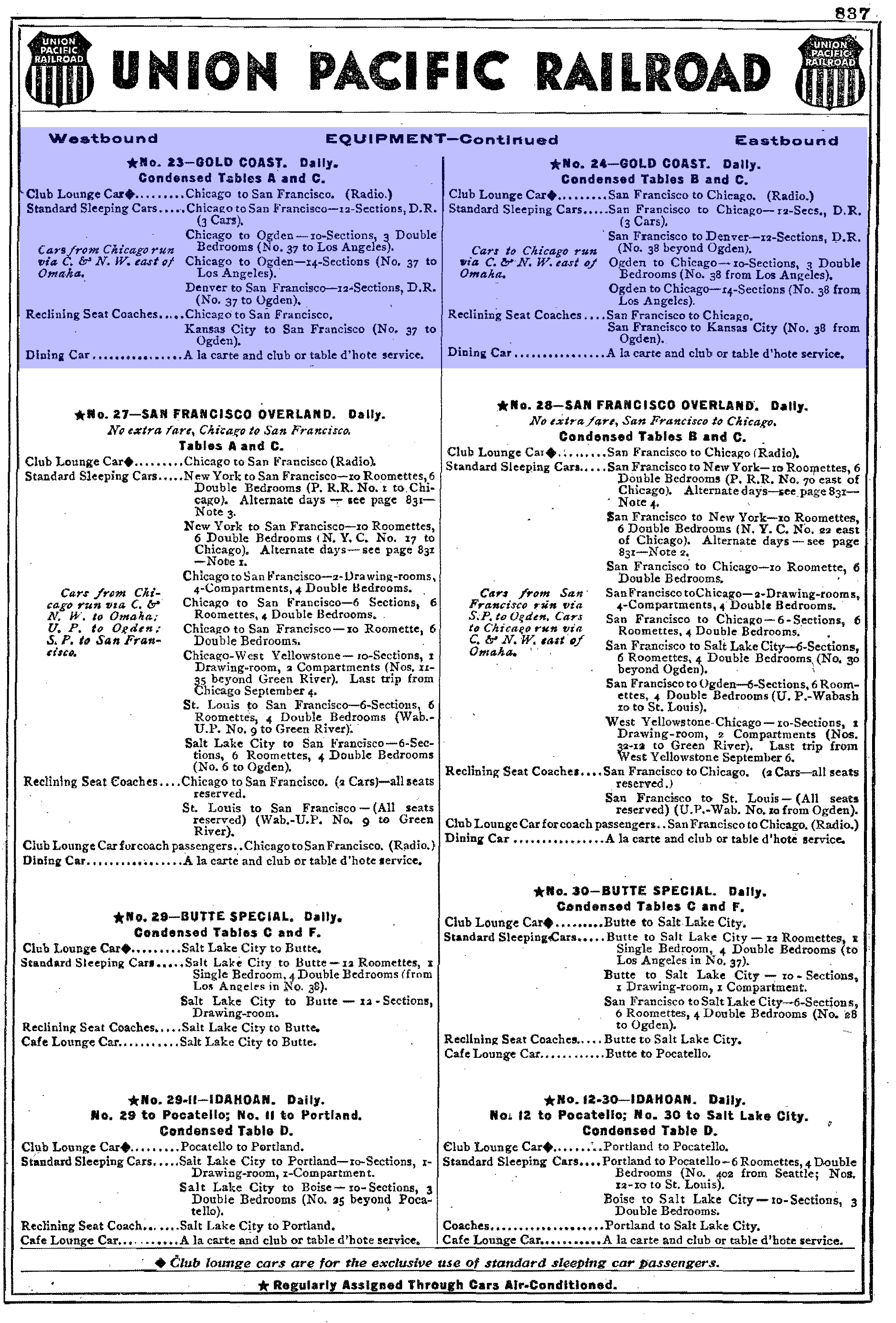 Its full consist comprised similar offerings found on the Overland such as coaches, a diner, a lounge, and typically a half-dozen sleepers (one of which ran through to Portland).

East of Ogden, Utah the train ran combined but west of that point split with one section bound for Los Angeles and the other continuing on along the Overland Route via the Southern Pacific to Oakland/San Francisco.

Typical power consisted of either UP's Class MT 4-8-2 Mountains or Class P 4-6-2 Pacifics.  Later, it was not uncommon to see the fast and powerful Class FEF 4-8-4 Northerns heading the train as well as streamlined diesels from Electro-Motive (E7s and E8s) and Alco (PA-1) during the train's final years in service.

F: Flagstop, stops only on signal.

S: Stops to let off or take on passengers.

Looking back on the Gold Coast Limited the train had a rather interesting history.  After only five years in service Union Pacific canceled it in 1931 citing declining ridership brought on by the Great Depression.

The name remained off the timetable for more than 15 years until it was reestablished during October of 1947 to replace the discontinued Challenger that year (a train which had also came and went from the timetable).

The 1930s and 1940s were the age of Union Pacific's streamliner fleet, specifically the City trains that defined the railroad.

It was UP itself that had christened the streamliner by debuting the three-car, articulated trainset known as the M-10000 (or just, The Streamliner, as the railroad called it) during February of 1934.  Before the decade had ended it fielded colorful, sleek, and fast trains serving the cities of Portland, San Francisco, Los Angeles, and Denver among others.

As the railroad continued expanding its fleet, an effort as much spurred by the competition as it was an attempt to provide travelers with additional services, the Gold Coast Limited lost importance.

During the years following World War II Union Pacific reorganized its fleet to introduce daily service on its City fleet.

This move meant that some trains, like the San Francisco Challenger and Los Angeles Challenger were forced off the timetable to provide enough equipment to do so.

Through the early 1950s UP was still witnessing relatively strong ridership, convincing it to purchase additional new equipment.

Large orders during this time from Pullman-Standard, Budd, and American Car & Foundry allowed UP to boast one of the most expansive lightweight fleets in the nation. 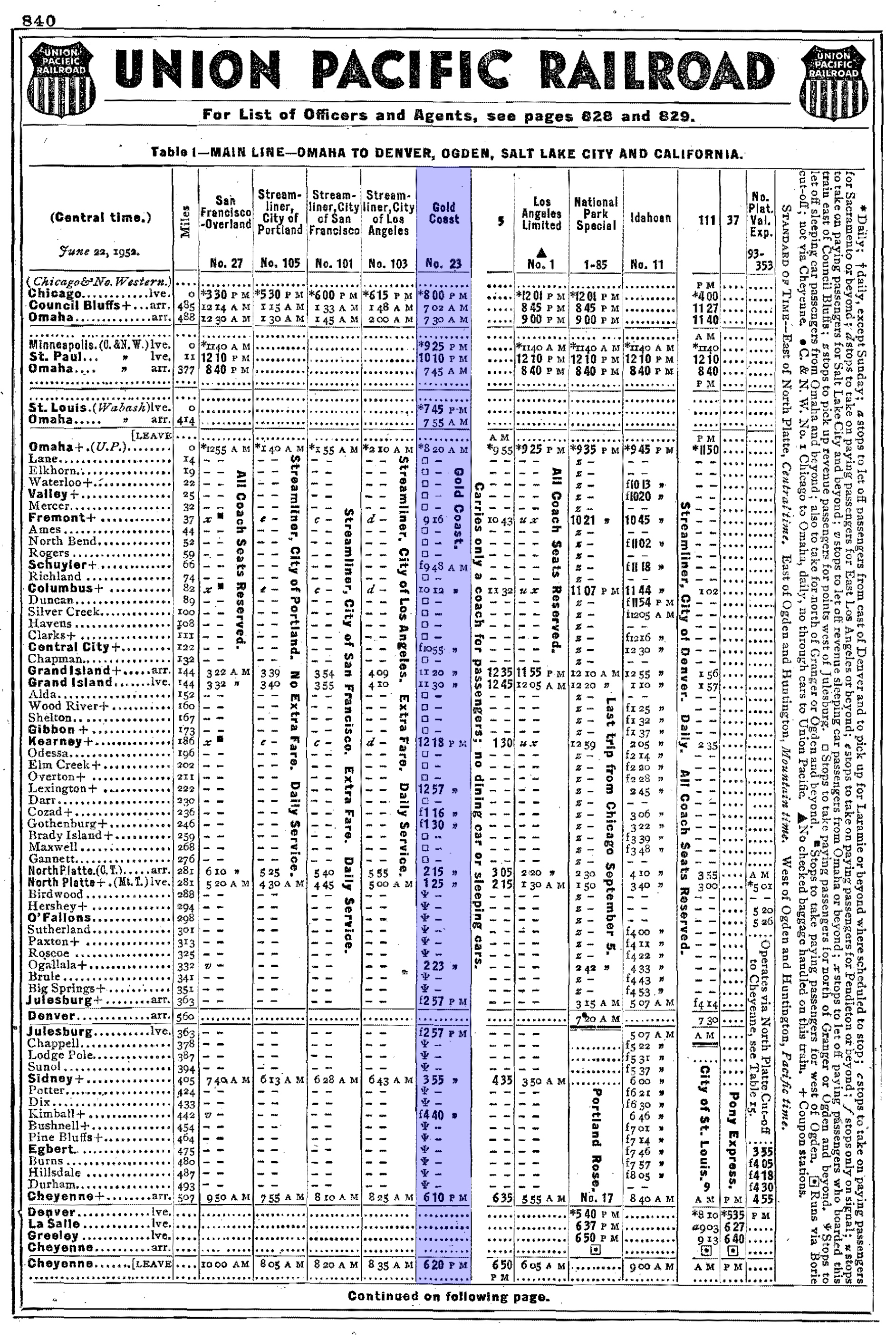 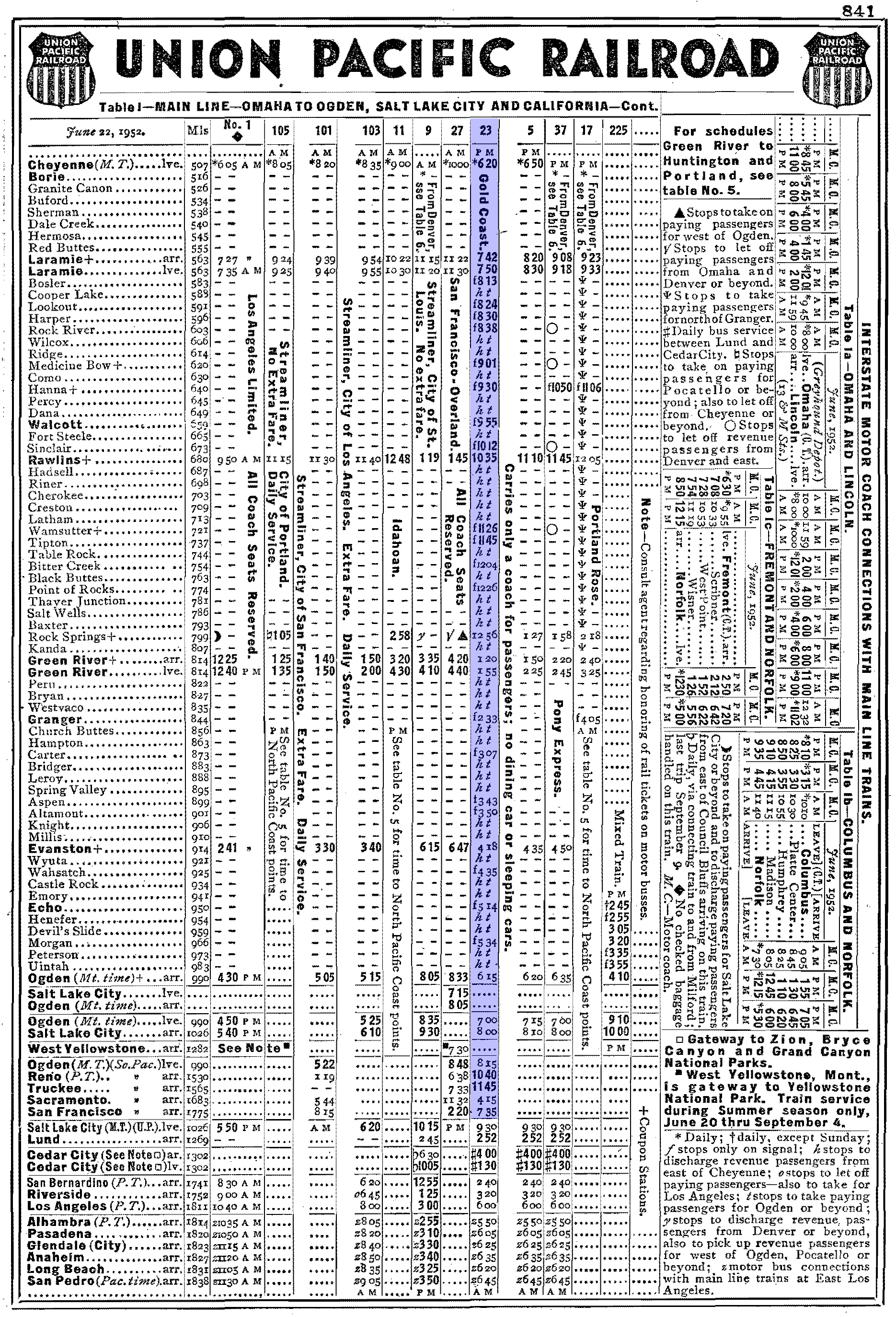 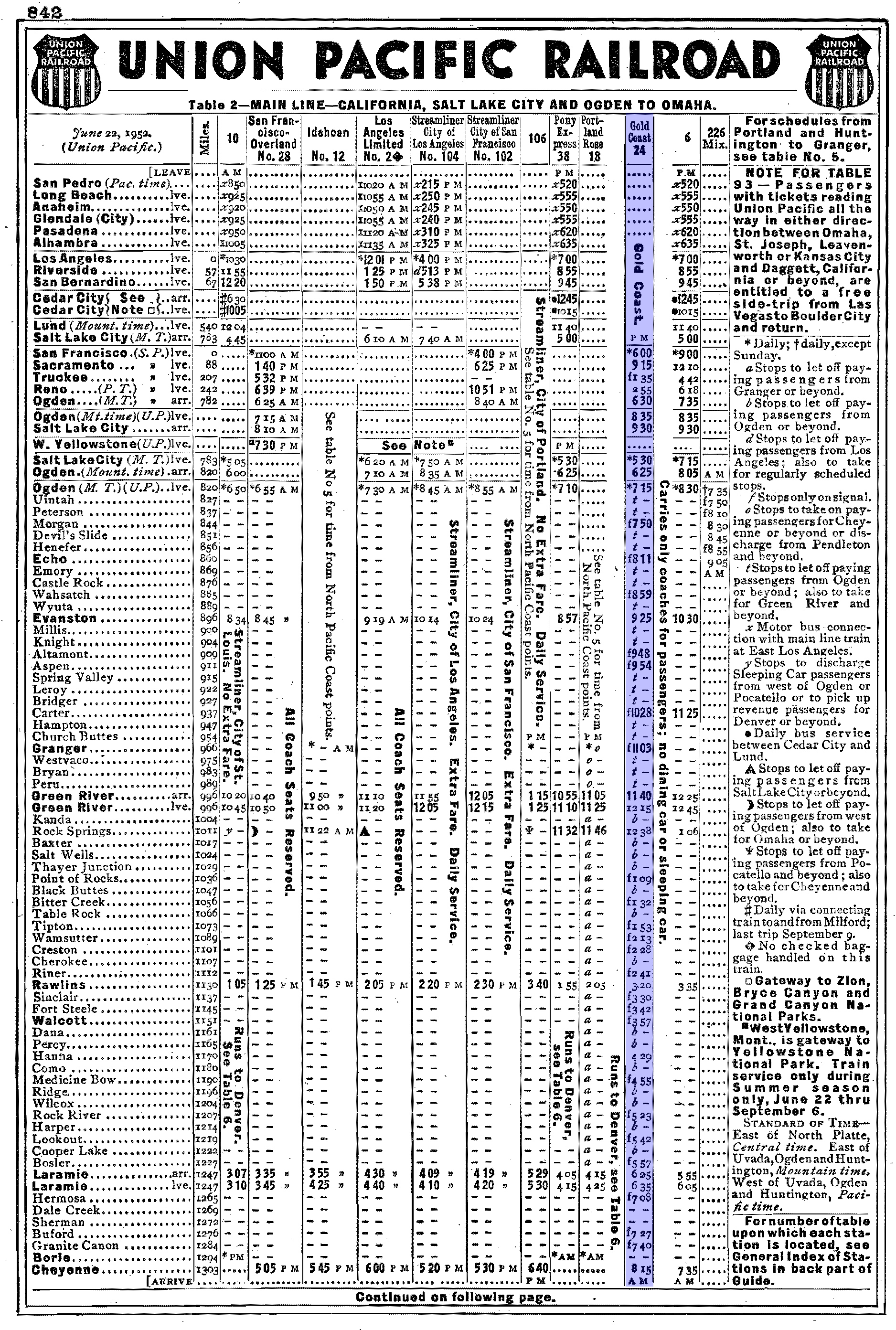 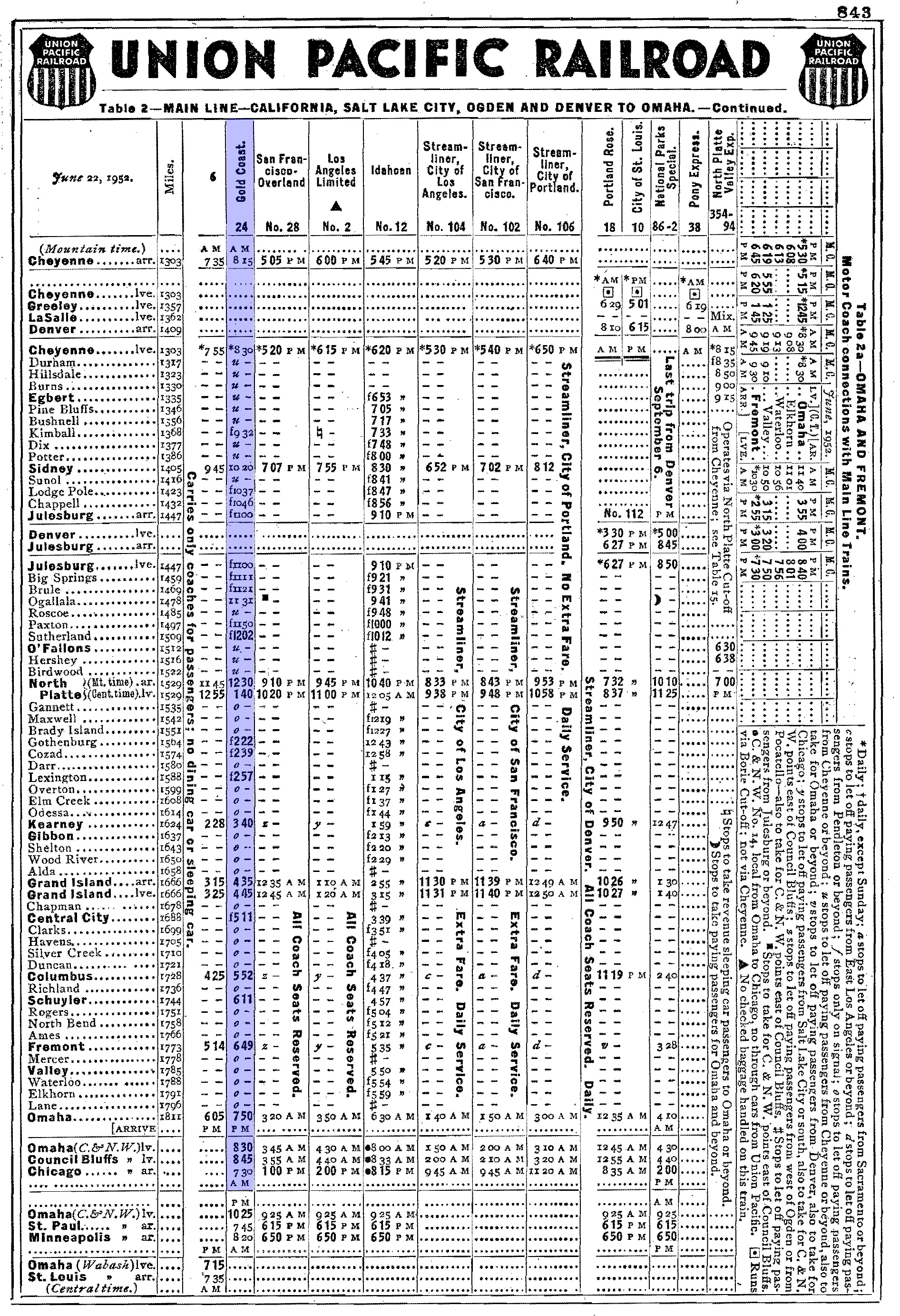 It was also the era of the Domeliner when Union Pacific acquired a large batch of domes used on all of its top trains.  These cars featured an array of services from sleepers, coaches, and lounge-observations.

However, the diners were the most popular and fondly remembered today enabling passengers the chance to enjoy their meal perched high above the tracks to witness the open vistas of the western United States.

It provided for an unparalleled experience and the Union Pacific was the only railroad to offer such a feature on its trains.  Through the 1960s UP was still upgrading and reequipping its train which finally led to the permanent cancellation of the Gold Coast Limited in 1955.