The General Electric Company has a history that dates back to the late 1870s.  Despite some bumps in the road over the years it remains one of the largest corporations in the world, building everything from jet engines to kitchen appliances.

GE's introduction into the locomotive manufacturing market began as early as 1918 and they built modest diesel switchers during the 1930s and 1940s.

The company also manufactured locomotives in conjunction with the American Locomotive Company (Alco) for many years.

However, this partnership cratered in the mid-1950s when GE recognized Alco was increasingly lagging behind industry leader Electro-Motive.

Over time, General Electric's locomotives became evermore reliable to the point that the company eclipsed EMD in the 1980's.

In November, 2017 GE reported its intentions to sell its locomotive division, GE Transportation.

This was made official in a press release made public at 7 AM on May 21, 2018 when it was announced that the Wabtec Corporation and GE Transportation would merge.

The marriage took place on February 25, 2019.  The company is now known as Wabtec Freight. 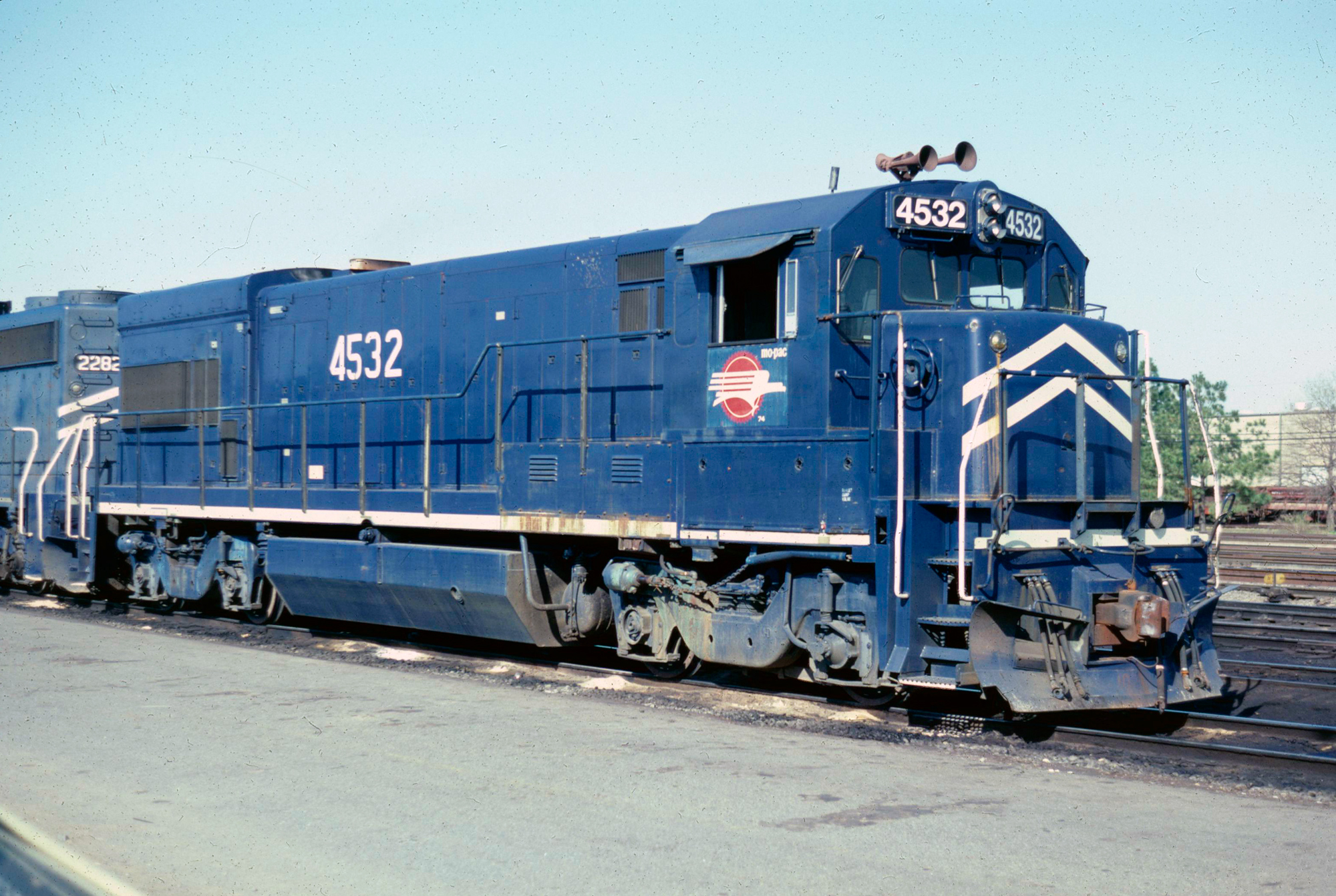 GE is credited with commercially producing the very first diesel-electric locomotive in 1918, a motor car design built for the Jay Street Connecting Railroad, #4.

Designated as model GM-50 it was essentially a diesel powered motor car, somewhat similar to an interurban car, and built in conjunction with Alco and Ingersoll-Rand.

Later, in 1924 the three companies built a 300 horsepower, 60-ton boxcab design.  This variant was purchased by the Central Railroad of New Jersey, and later the Baltimore & Ohio.

In the following years, General Electric remained an insignificant player in the diesel-electric market, even as Electro-Motive exploded in the late 1930's. 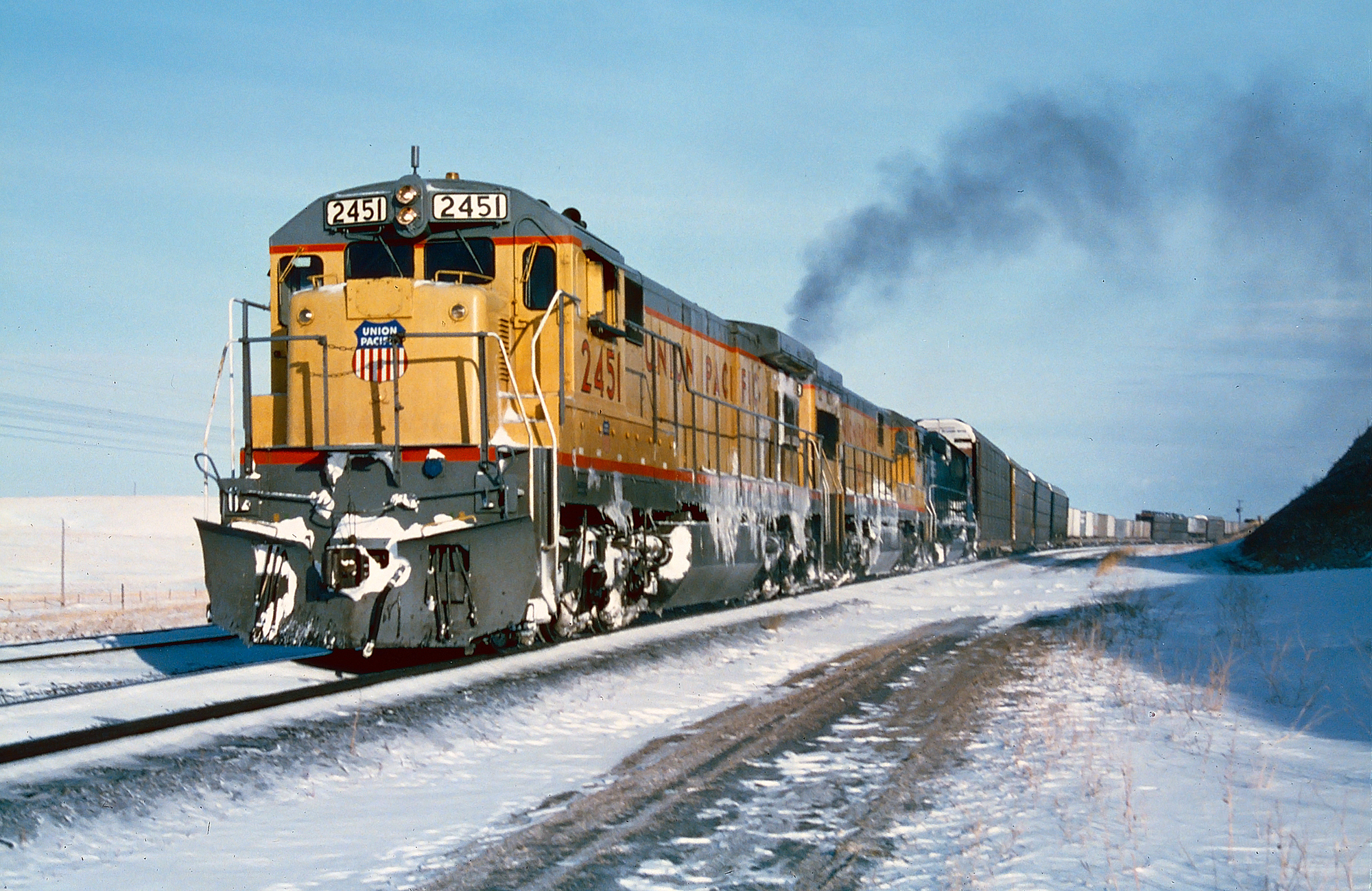 A pair of Union Pacific C30-7's, with #2451 up front, along with a former Missouri Pacific unit, lead a freight west of Cheyenne, Wyoming circa 1984. Mike Bledsoe photo. American-Rails.com collection.

During this time, GE's models remained small in nature, designed primarily for light branch, yard, and industrial duty. From 1928 through 1930, GE built box and some center-cab designs ranging from 300-600 horsepower.

By 1940 the company would introduce its most successful switcher to date, the ubiquitous 380-horsepower, 44-tonner.

This little switcher was beloved by industries for its lightweight design and ability to navigate tight curves.  When production ended in 1956, GE had manufactured 373 44-tonners. 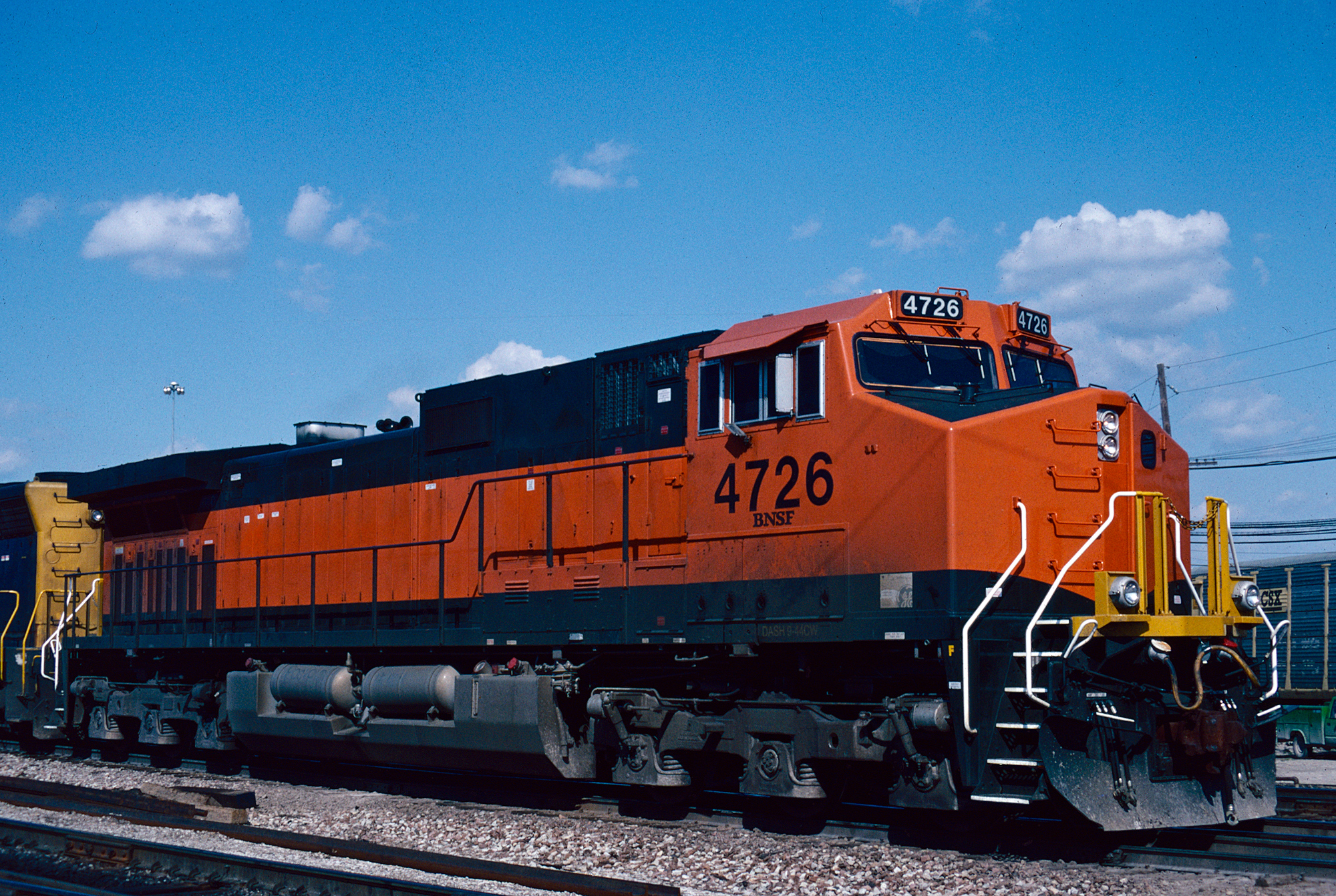 After the end of World War II, GE followed up its successful 44-tonner with heavier models like the 70, 95, and even 125 tonners.

In 1954, GE ended its partnership with Alco and for the rest that decade the company experimented with different road unit designs. 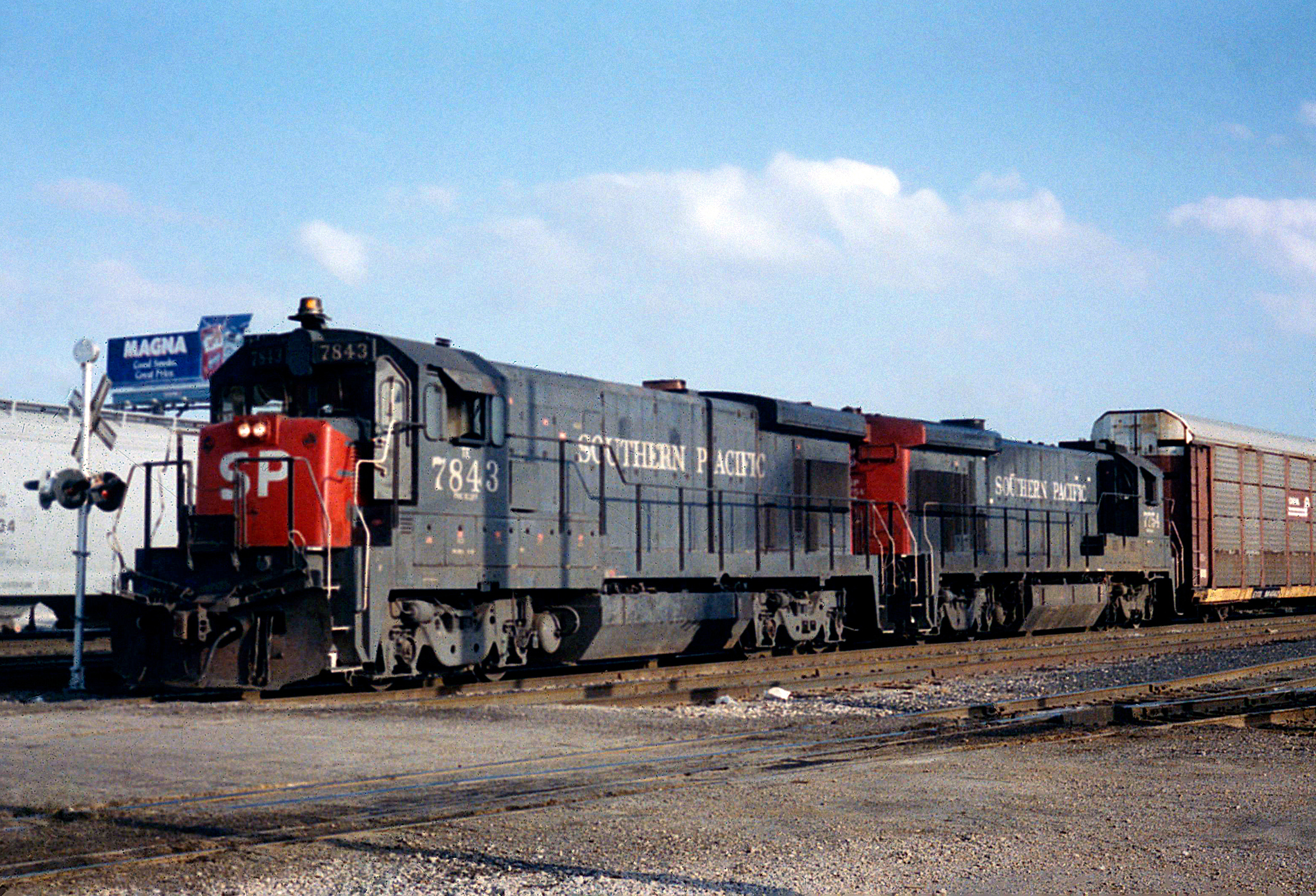 The model was later dubbed the "U-boat" by railfans.  Its designation was broken down as follows:

There was nothing fancy about the U25B, especially its carbody, which carried straight lines and a short, stubby square nose.

However, the unit was durable and easy to maintain, which the railroads loved, especially the maintenance crews. 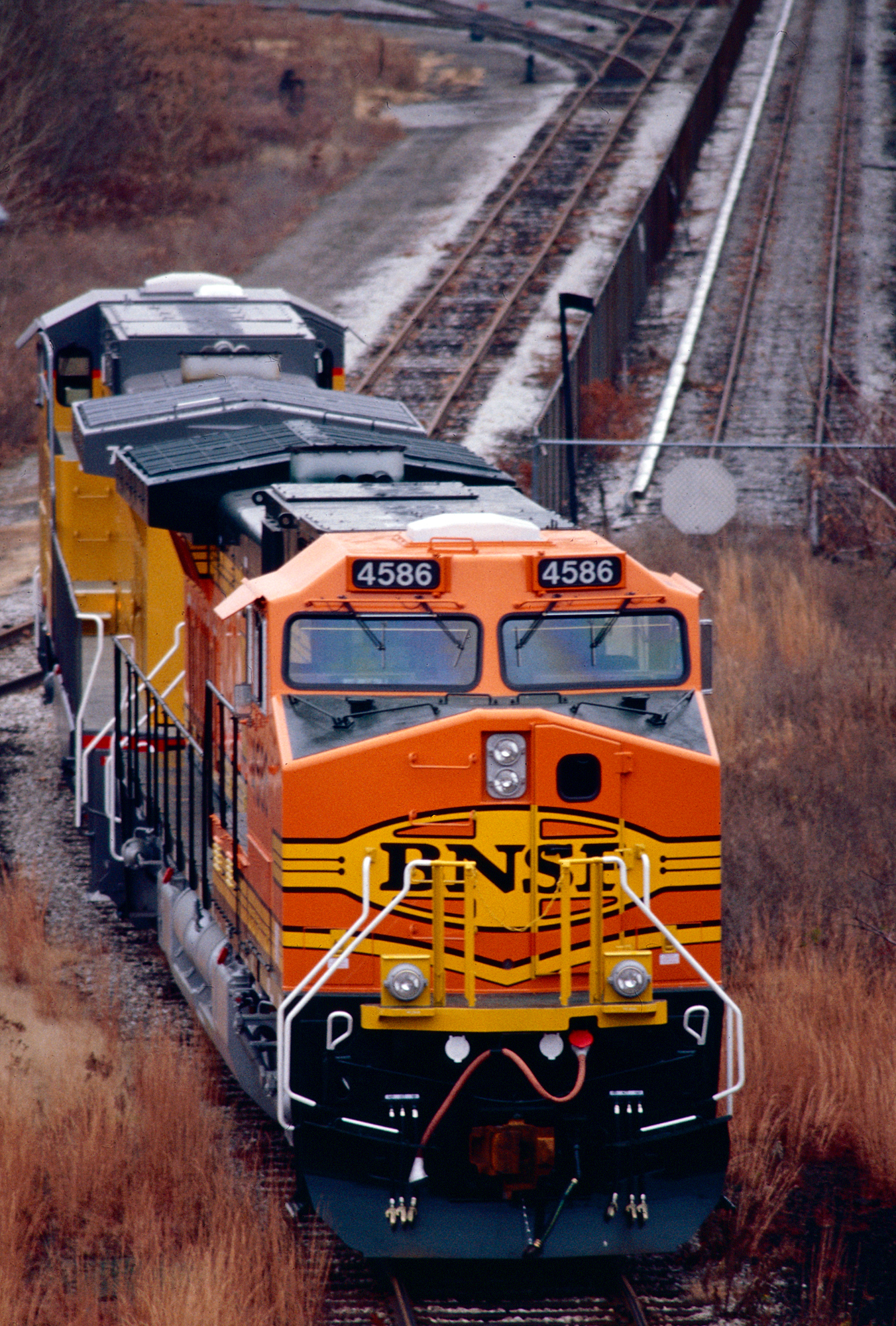 Ranging between 2,500 and 3,500 horsepower, all models only saw a few hundred bulit.

However, beginning with its "Dash 7" series in the late 1970s, and following with the "Dash 8" and "Dash 9" series, GE propelled itself past Electro-Motive in the locomotive market.

In the 1990s, and into the 2000s, GE further solidified itself as the leading locomotive builder by producing the successful AC series (AC4400CW and AC6000CW) that sold thousands of units. 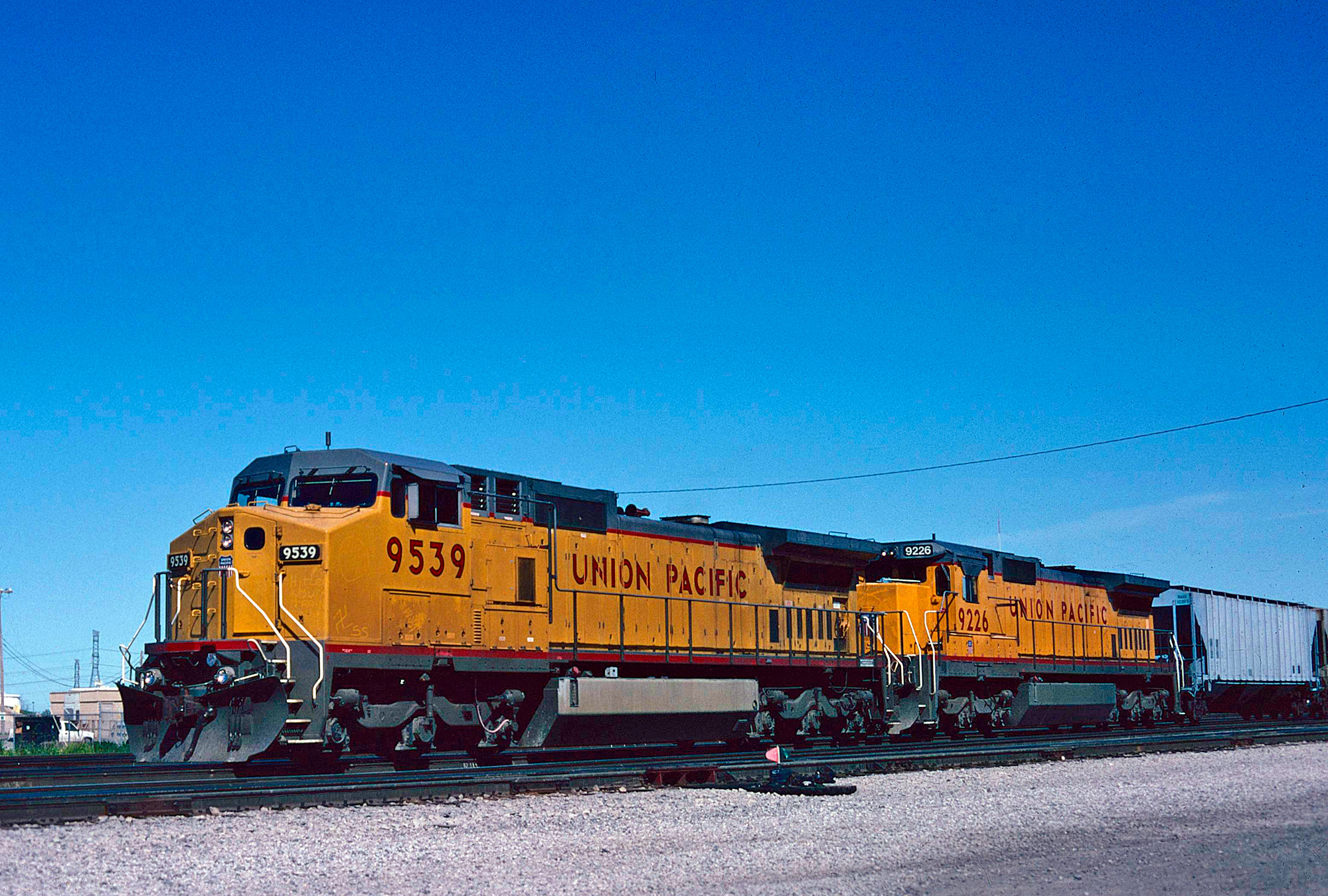 The ES40DC, ES44DC, and ES44AC are part of the newest General Electric locomotives known as Evolution Series.

The Evolution Series followed the builder’s Dash 9 models and is designed to offer just as much horsepower as conventional diesels but by burning much less fuel and in turn producing fewer emissions.

The series was designed to meet the EPA’s Tier 2 requirement of emissions standards and is powered by a GEVO 12-cylinder prime mover. So far these new series continues to sell well for GE, sustaining it as the premier locomotive builder nationwide.

With the marriage of GE Transportation and Wabtec, made official on February 25, 2019, the new corporation was referred to as Wabtec Freight.